AleaSoft, May 5, 2020. The month of April ended with a historical fall in electricity demand in Europe, reaching in some cases levels close to those of the beginning of the century. The measures taken to stop the coronavirus crisis were the main cause of this decrease. The Brent and gas prices also reached minimum values for this reason. The combination of these factors and higher solar energy production caused the electricity market prices to reach lows of at least the last six years.

The solar energy production increased during the month of April compared to the same month of the previous year in the analysed European markets. The largest increases, of 42% and 35%, were registered in Italy and Spain, respectively. While the smallest year‑on‑year increase, of 5.1%, was in Portugal.

Compared to March 2020, the solar energy production increased following its seasonal pattern as hours of sunlight increase. The exception was the Portuguese market where there was a decrease of 6.6%. However, given the 11% increase in the Spanish market, the solar energy production in the Iberian Peninsula as a whole increased by 9.3% in April. On the other hand, the increases in Germany, Italy and France stood at 59%, 47% and 39%, respectively. 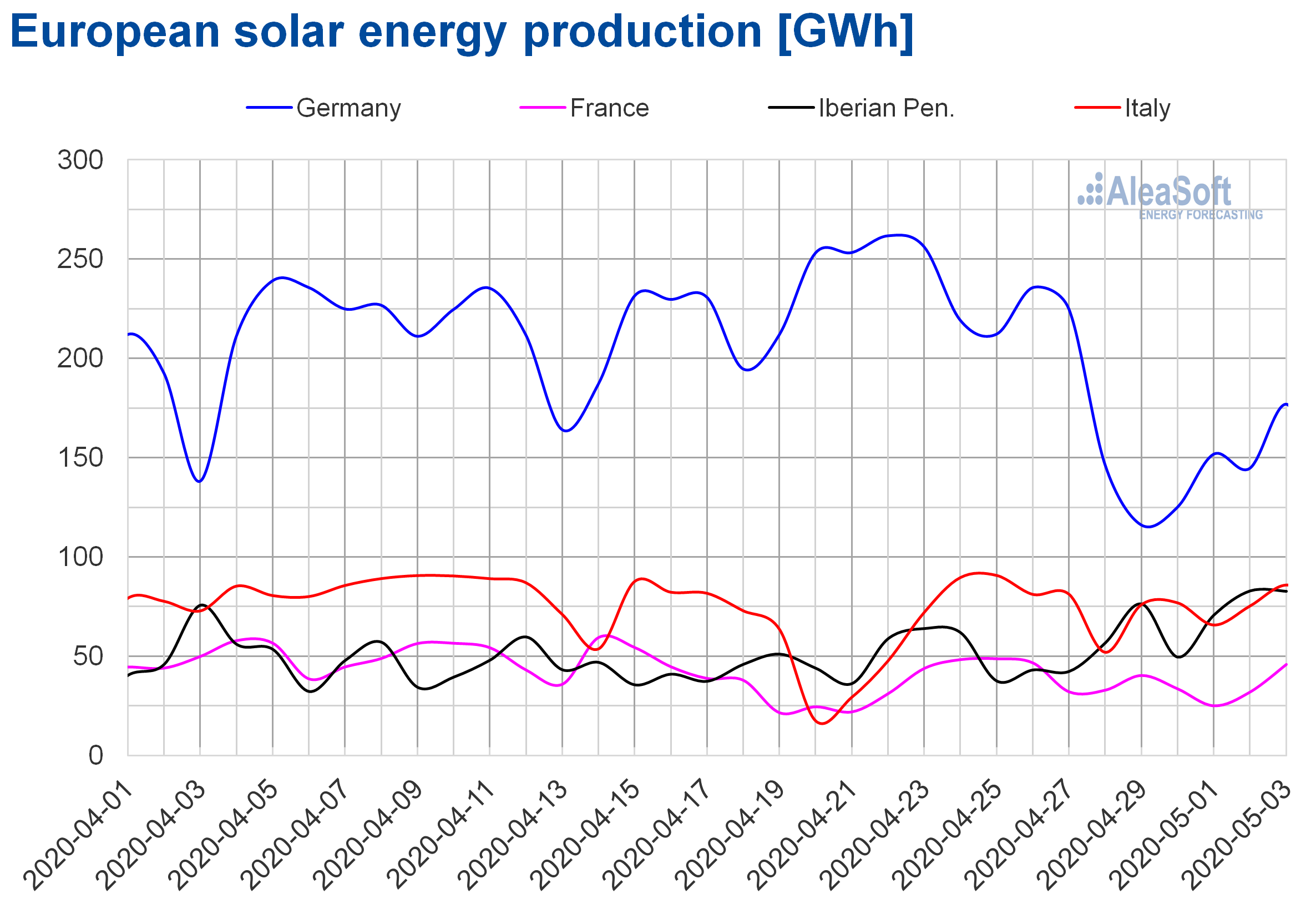 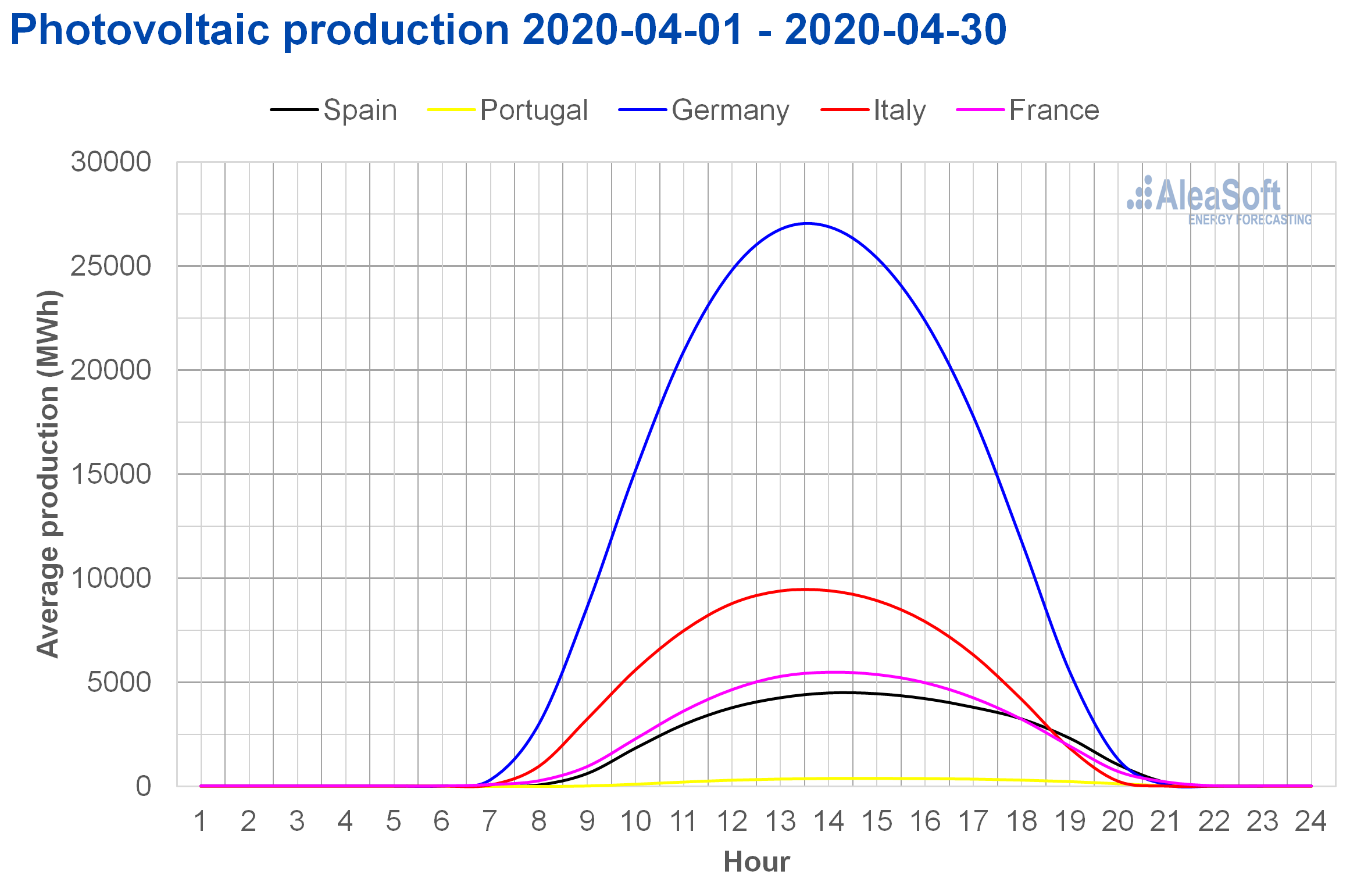 In April, the wind energy production decreased in the European electricity markets in a general way compared to the same month of the previous year. The largest decreases, of 24% and 21%, occurred in Portugal and Spain respectively. While Germany and France registered the smallest variations, ‑1.0% and ‑1.3%.

Compared to March 2020, the wind energy production also fell significantly in all markets. The decreases registered were over 30%, the case of France stood out, where a 46% decrease was reached. 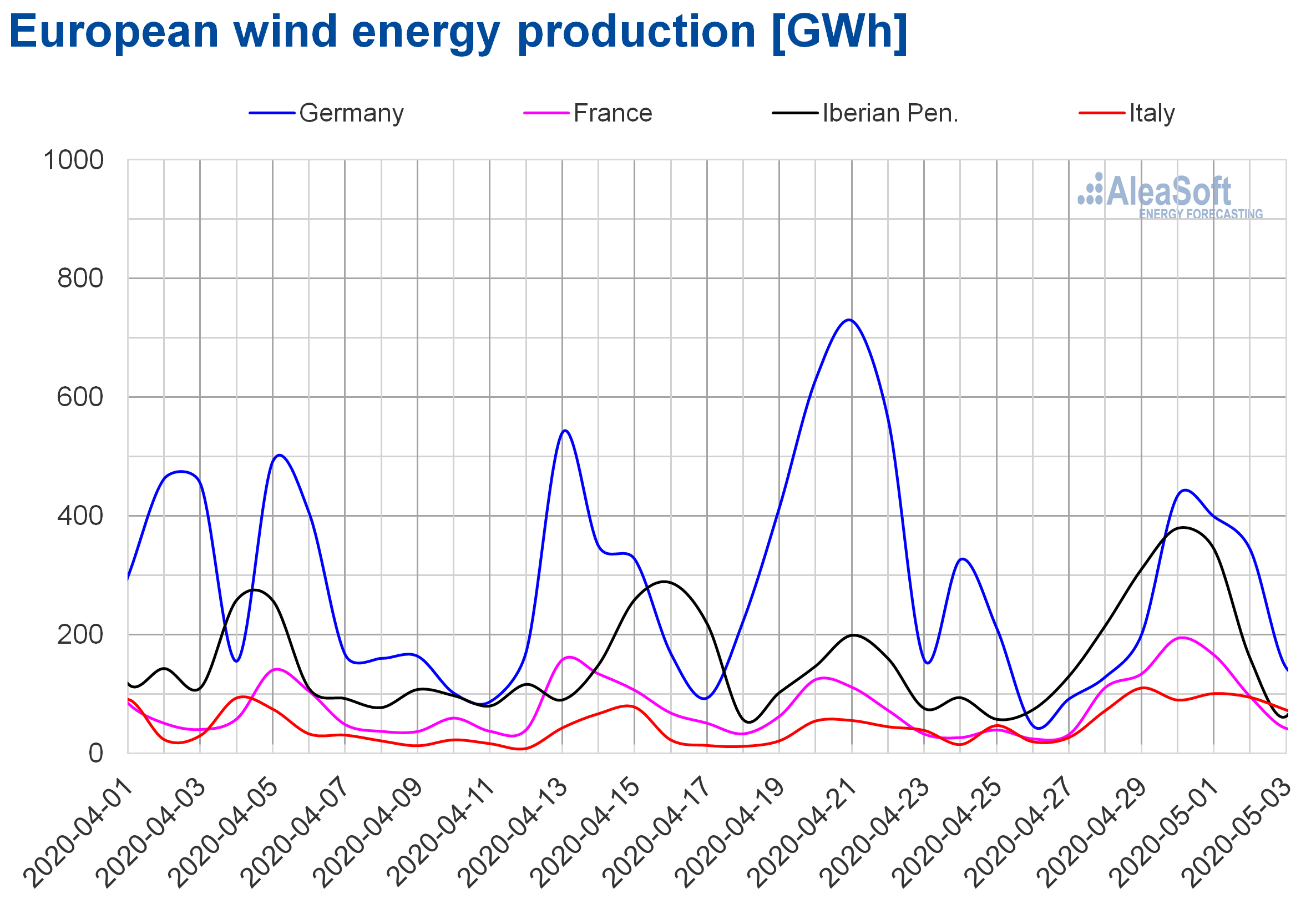 The effect of the confinement due to the COVID‑19 pandemic on the European electricity demand during the month of April caused year‑on‑year falls in all electricity markets, of up to 21% in some of them, and in some cases decreasing to levels of the first decade of the XXI century. The 18% year‑on‑year drop in Italy pushed the demand to a record of 19 917 GWh, the lowest demand in a month since August 2000. The British demand has a downward trend since some years ago, but, as happened in other markets, this time registered the largest year‑on‑year decline in the history for a month, falling by 19% to a new record low of 16 579 GWh. In the Spanish market, the decline reached the levels seen 19 years ago, in April 2001, with a decrease of 17% in year‑on‑year terms. On the other hand, the markets of Belgium and the Netherlands also had the lowest monthly records in their history in April, with respective decreases of 14% and 21% compared to April 2019. In Portugal, the year‑on‑year drop was 11%, registering a demand of 3703 GWh, the lowest record since April 2006. During the recently ended April, the French and German markets had the closest behaviour over time compared to previous years, as the demand levels were close to those of August and September 2014 respectively. The corresponding decreases were 19% and 7.5%.

A general decrease in electricity demand is also obtained by analysing this April with respect to March 2020. The increase in average temperatures between 1.5 °C and 5.0 °C, in addition to the confinement measures, were the most influential factors in this fall. The most notable falls were those of France and Great Britain, which were 23% and 22% respectively. In Germany and Belgium there were also drops of around 12% in both cases. The decline registered in Italy was 13%, and in the Netherlands, 10%. 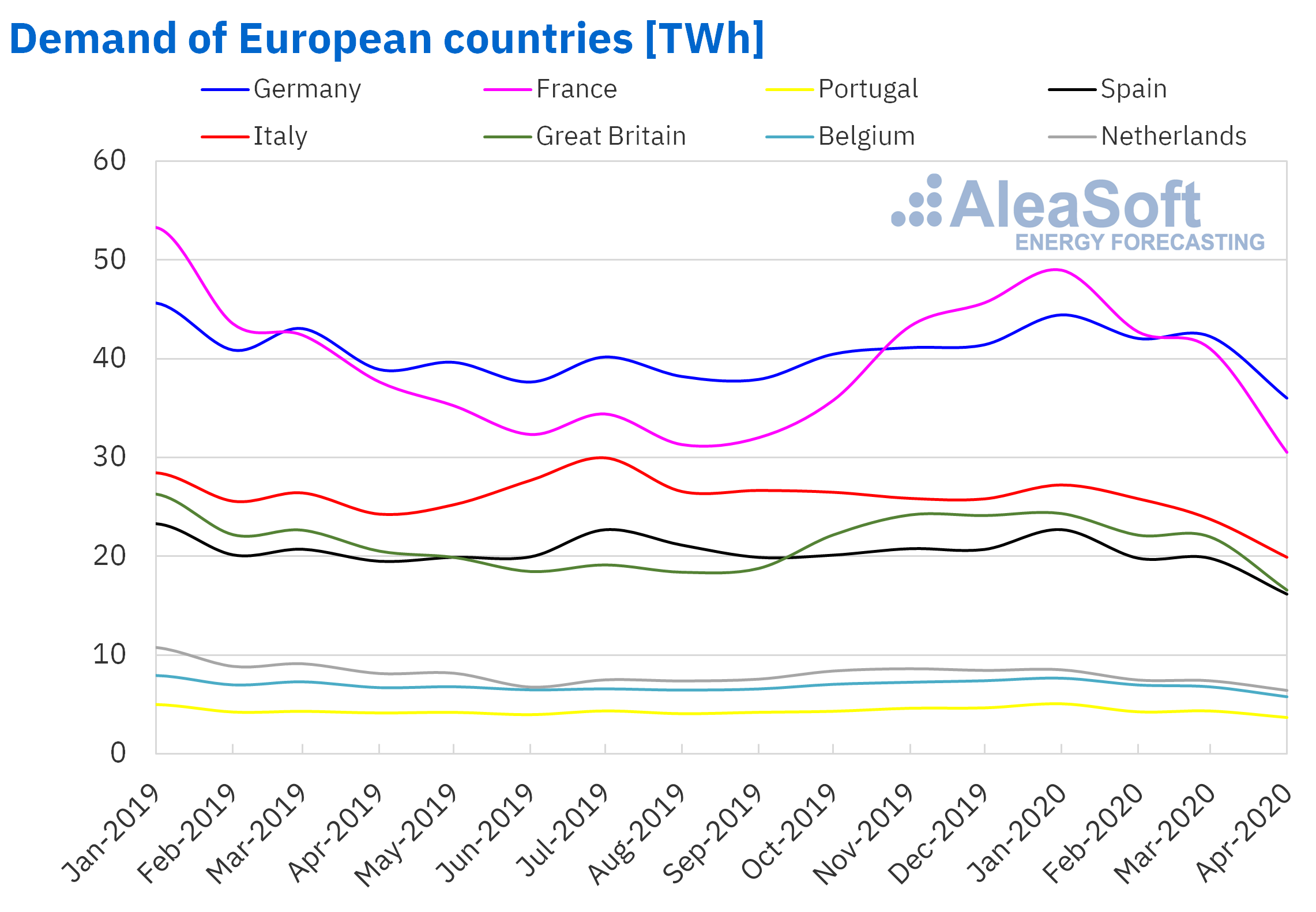 At AleaSoft electricity demand observatories were created to analyse the behaviour of the demand in the European electricity markets week after week. 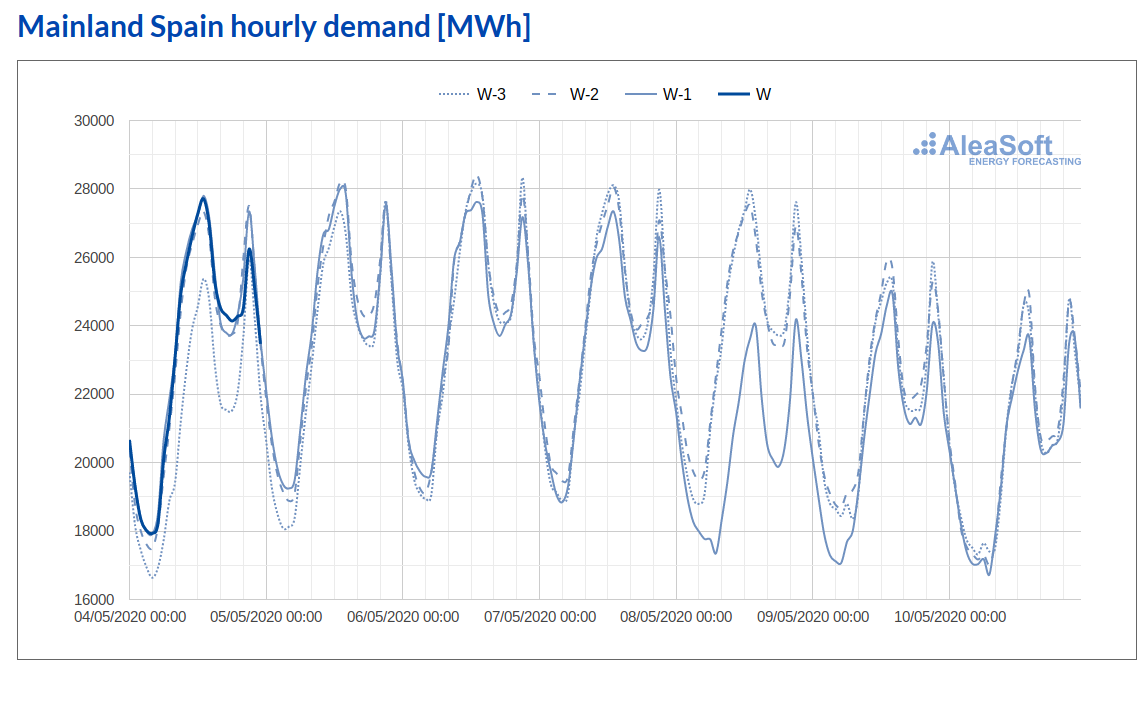 In the just ended month of April, the monthly average prices registered in all European electricity markets were, at least, the lowest in the last six years. But the case of the German market stands out, which registered the lowest monthly price in the last nineteen years.

The monthly average price was less than €30/MWh in all markets. The Nord Pool market registered the lowest average, of €5.22/MWh. While the market with the highest average, of €27.62/MWh, was the British N2EX.

If the average prices of the previous month are compared to those registered in the same month of 2019, the price variations were even more important. The maximum decrease, of 87%, occurred in the Nord Pool market and the smallest, of 45%, in the N2EX market. In the rest of the markets, the price drops were between 53% of the EPEX SPOT market of the Netherlands and the IPEX market and 65% of the MIBEL market of Spain and Portugal and the EPEX SPOT market of France. 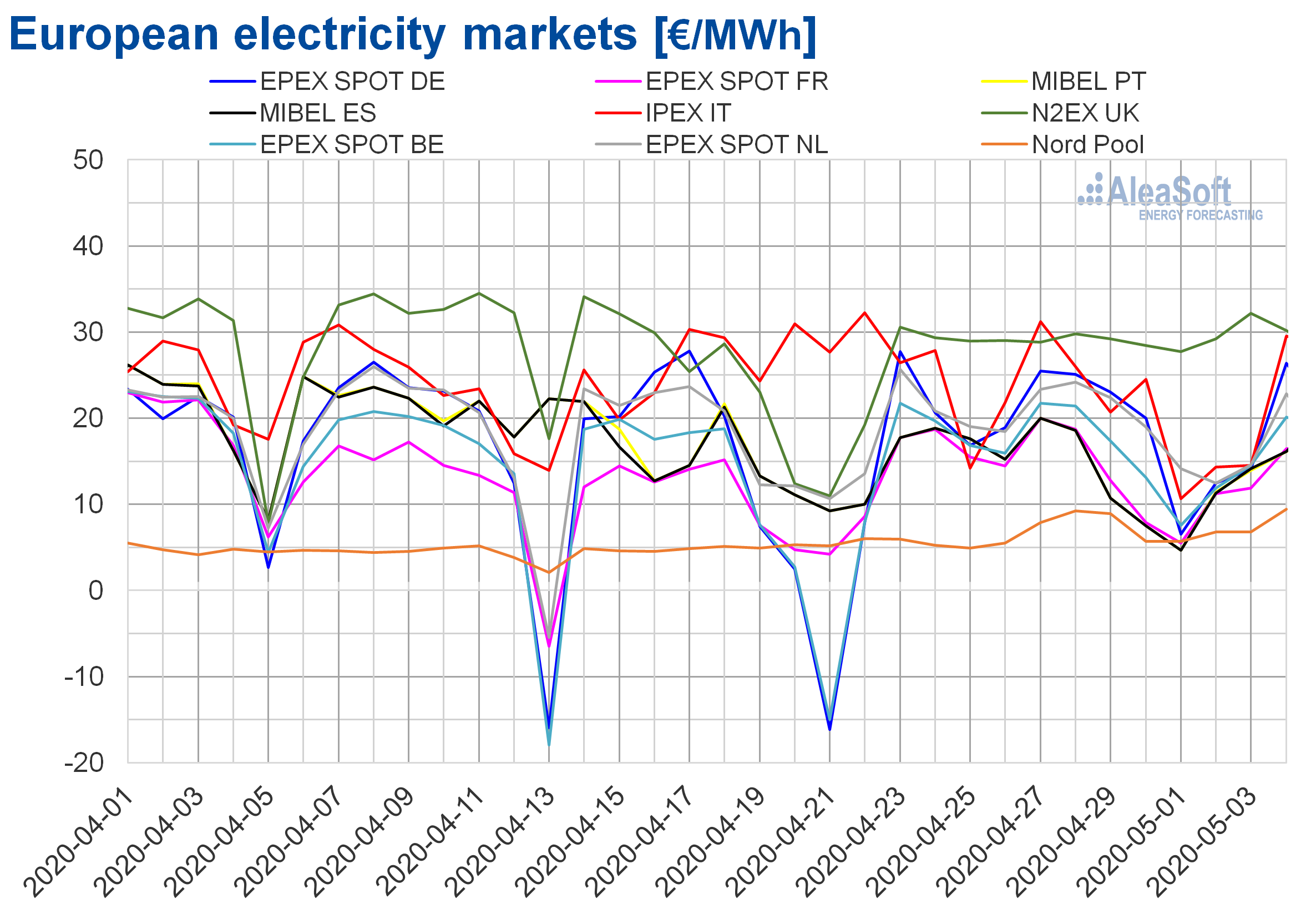 Among the negative hourly prices registered in the month of April 2020, the price of the hour 15 of Monday, April 13, in the EPEX SPOT market of Belgium, of ‑€115.31/MWh, stands out because of its value, which is the lowest since June 2019 in that market. In the case of Great Britain, on Sunday, April 5, at the hour 16, a price of ‑€21.56/MWh was registered, which is the lowest in the last 10 years in this market. 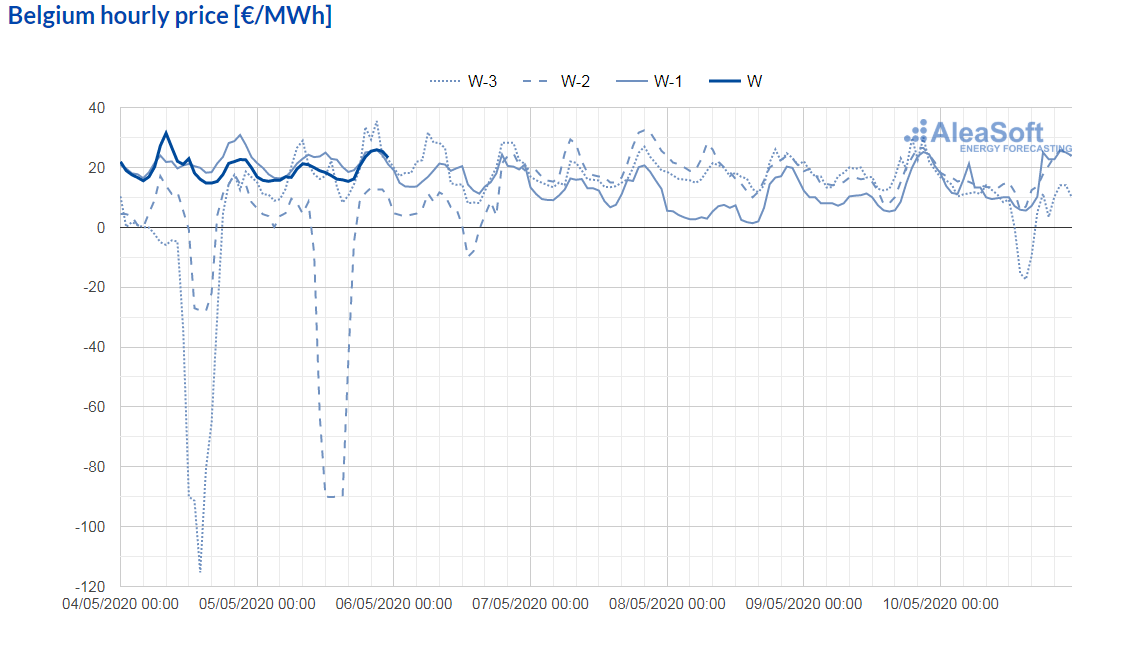 The evolution of prices registered during the month of April was strongly influenced by the measures adopted to combat the coronavirus pandemic, which reduced the energy demand and kept the gas and coal prices low. In addition, the Easter holidays and the increase in temperatures also contributed to the drop in demand.

In the month of April 2020, the average price in the MIBEL market of Spain and Portugal decreased by 36% compared to the average of the previous month. While the decrease compared to April 2019 was 65%, the second largest decrease in Europe after that registered in the Nord Pool market. As a result of these decreases, the monthly average price of last month in the Spanish market was €17.65/MWh and in the Portuguese market, €17.77/MWh.

The fall in electricity demand in April was 16% in Spain and 12% in Portugal. This fall, due to the seasonal increase in temperatures, to the Easter holidays and the economic slowdown due to the measures taken during the COVID‑19 crisis, together with low gas prices, put downward pressure on Iberian electricity market prices.

April was characterised by increases in prices of the product for the next quarter in all the European markets analysed at AleaSoft. The EEX market of France registered the most notable rise with a 25% price increase. The increases of the ICE and NASDAQ markets of the Nordic region and of the EEX market of Germany were also noteworthy, although it should be said that even with this rise, the Nordics keep the price of the future Q3‑20 below €10/MWh. The OMIP market of Spain and Portugal was the one that changed its price the least between the beginning and the end of the month.

In the case of the electricity futures for the calendar year 2021, the rise was widespread and the rise in the EEX market of France even more important, with an increase of 36%. The Nordic region registered increases in the ICE and NASDAQ markets of 14% and 15%, respectively. The ICE market of the Netherlands ended the month with an increase compared to its start of 3%, making it the market with the lowest price variation for this product during April.

In April, the evolution of the Brent oil futures prices was conditioned by the expansion of the coronavirus globally and the drop in demand caused by the measures adopted by the different governments to try to stop the pandemic, and also by the trade war between Russia and Saudi Arabia, countries that increased their oil production in that month.

The historical low registered on April 21, was influenced by the collapse of the futures prices for May of the West Texas Intermediate oil, the benchmark in the United States. On Monday, April 20, these futures reached a negative price of ‑$37.63/bbl, for the first time in history, due to low demand and available storage capacity.

The recovery in prices in the last days of the month is related to the start of the production cuts in some countries. In addition, the cuts agreed by the OPEC+ began in May. However, the demand remains low and the storage capacity greatly reduced.

During the month of April, the decrease in demand due to the COVID‑19 crisis exerted its downward influence on the evolution of the prices of gas and coal futures.

Despite the measures in force in Europe in April, limiting the mobility and the industrial production, to contain the spread of the COVID‑19, the announcement of reductions in nuclear energy production in France during this year, allowed the recovery of the CO2 emission rights futures prices. 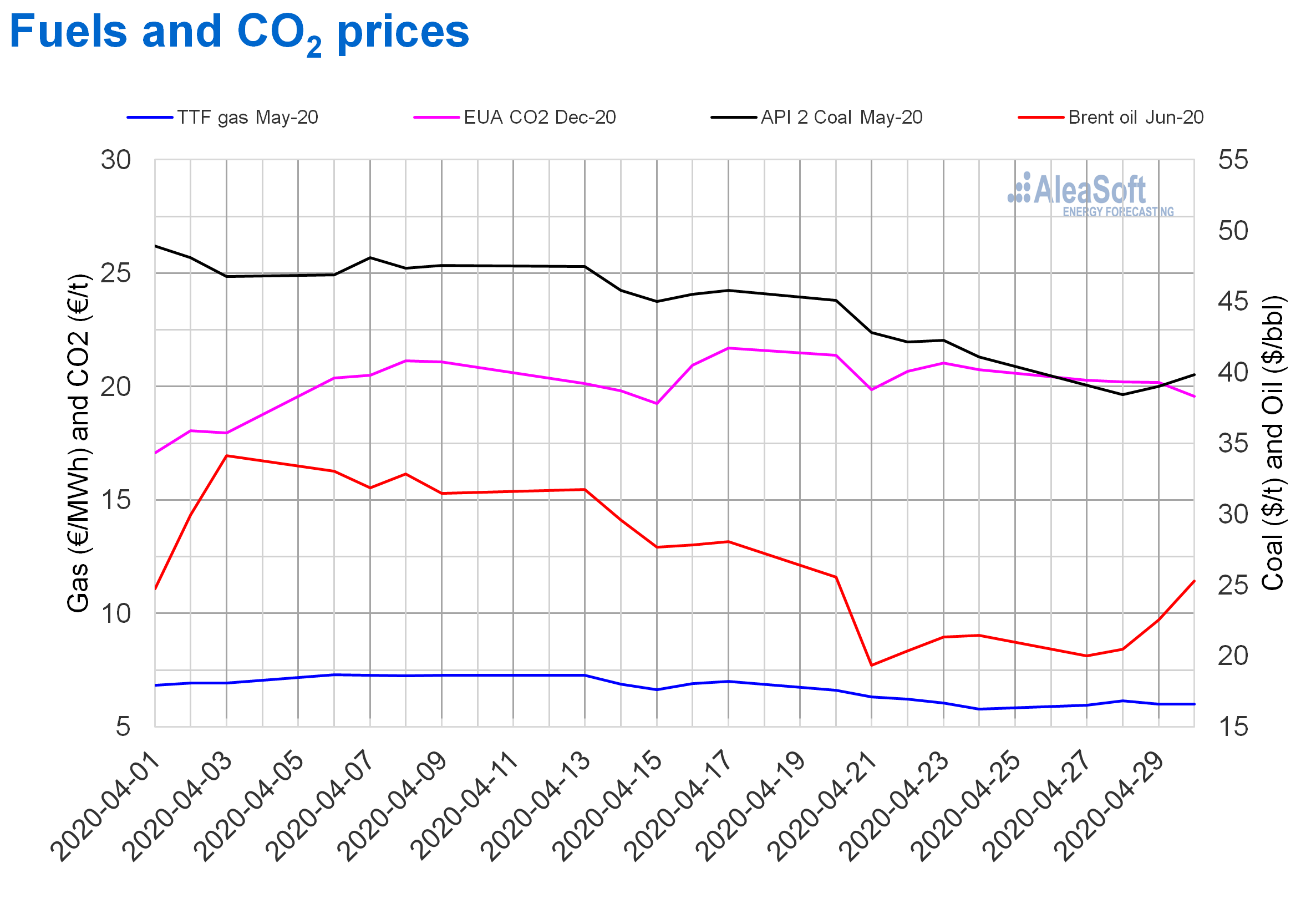 On the AleaSoft website, the European electricity markets observatory was created, where it is possible to track the evolution of demand and prices with data that is updated daily. Currently, the observatories of the MIBEL market of Spain and Portugal, the EPEX SPOT of France, Germany, Belgium, the Netherlands, Switzerland and Austria, the IPEX of Italy, the N2EX of the United Kingdom and the POLPX of Poland are already available.