The role of the green hydrogen in the industry decarbonisation

AleaSoft, May 6, 2020. Like the transport sector, the industrial sector is one of the most energy demanding and, consequently, one of the most polluting. The electrification and, specially, the hydrogen will play a very important role in the decarbonisation of this sector for the achievement of the environmental objectives and of the reduction of the CO2, the polluting gases and the greenhouse gases emissions.

Energy consumption in the industrial sector

As commented in a recent piece of news of AleaSoft, the industrial sector is one of the largest consumers of energy, along with the transport and the residential sector, in the countries of the European Union. Each of these three sectors represents a quarter of the total energy consumption in Europe, according to 2017 data from the International Energy Agency (IEA). 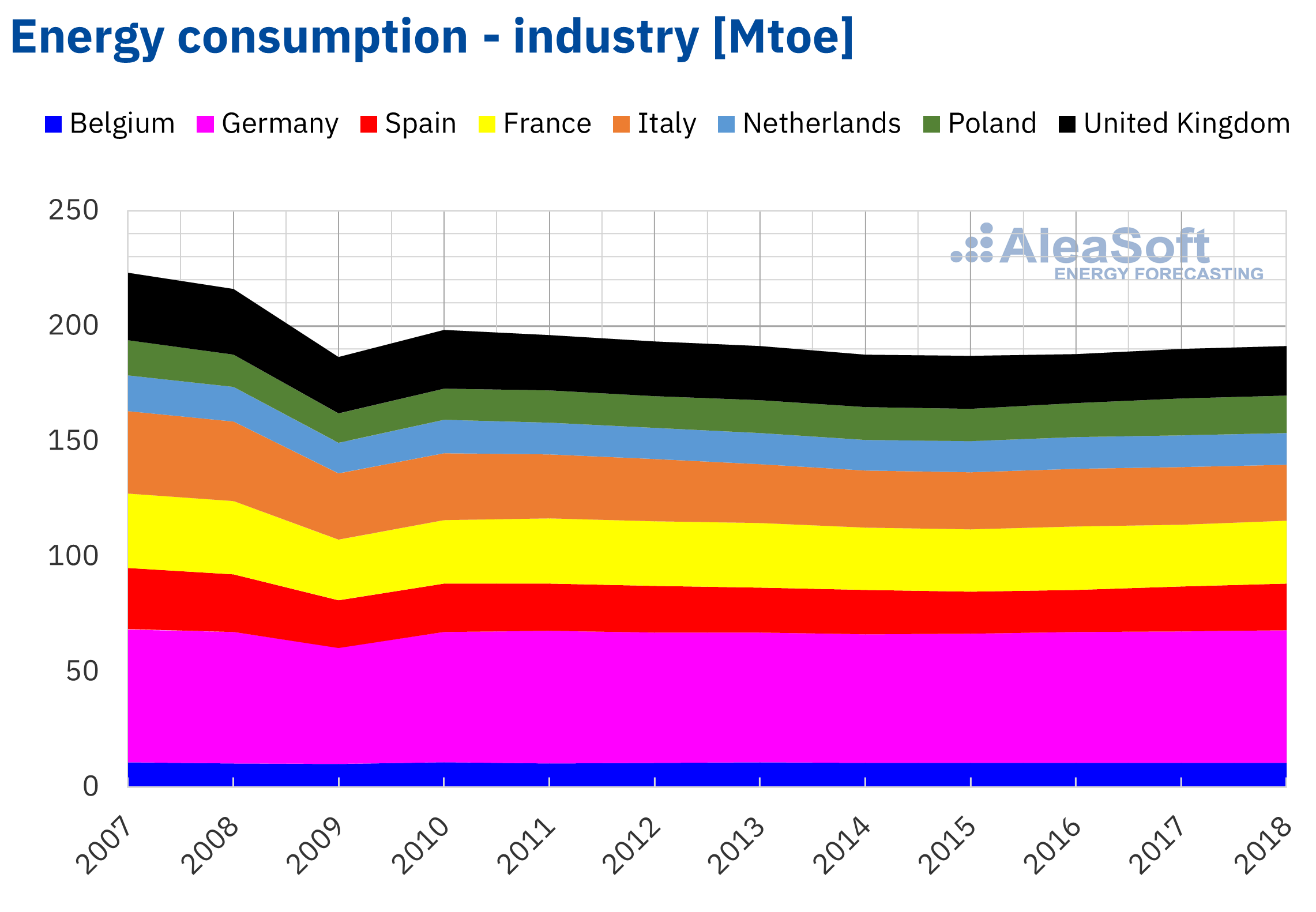 Regarding the CO2 and greenhouse gas emissions, the industrial sector is responsible for approximately 15% of the total emissions, behind the most polluting sectors of transport and electricity generation. Therefore, in order to achieve the environmental and emission reduction objectives, it is essential to clearly face the decarbonisation of the industry and its transformation towards the use of renewable energy.

The decarbonisation of the industry

In early November 2019, a group of industrial organisations signed a declaration urging the European political representatives to boost the use of the electricity produced from renewable sources to achieve the goal of zero emissions by 2050.

In addition to being the answer to the increase in produced electricity, the massive electrification is also the necessary factor that will cause sufficient demand and thus avoiding the oversupply of energy that would sink the market prices and would make investments in new generation facilities unprofitable. Therein lies the key to the market balance, an increase in demand that responds and is also necessary to absorb the increase in renewable energy generation.

But there is another important element to take into account when decarbonising the industry: the electrification is not the optimal alternative for some industrial processes, in the same way that vehicles with electric batteries are not the most viable alternative for the heavy transport or for very long distances such as marine or air transport.

We are talking about industries that need heat. The generation of industrial heat is one of the industrial processes that consumes more energy. Industries such as oil refineries or the chemical industry require a large amount of heat and, moreover, at very high temperatures. Strategies such as cogeneration allowed increasing the efficiency producing heat and electricity at the same time, but even so, it is a polluting process, since the used fuel is natural gas or coal.

Producing heat with electricity is inefficient. The alternative that is considered in these cases is hydrogen. This light gas produces heat when burned, and being composed only of hydrogen atoms, its combustion does not generate CO2, but only H2O, that is, water. Producing industrial heat from hydrogen would allow the emissions in the heat production process to be eliminated, but emissions will continue to be generated in the process of generating this hydrogen. Currently, practically all hydrogen is produced from fossil fuels, a process that involves the emission of polluting gases.

The characteristic that makes hydrogen really attractive as a key element in the decarbonisation of the industrial sector is that it can be produced directly from the electrolysis of water, which does not generate emissions since its only residue is oxygen. If, in addition, the electricity used in the electrolysis was generated from renewable energy sources, then the entire cycle of production and consumption of hydrogen is completely clean and it is possible to speak of green hydrogen.

The use of green hydrogen will also allow the decarbonisation of those industries that use hydrogen in their processes, such as oil refineries or in the production of many chemical compounds.

The hydrogen as a form of energy storage

This ability to be produced from electricity places the hydrogen in a leading role in the energy transition, since it can be used as a form of energy storage. In addition, it can be stored in large quantities, in underground caverns or in the current natural gas distribution piping system, and for long periods of time.

Taking into account that the stored hydrogen can be used to generate electricity again, for example, by an electrochemical reaction in a fuel cell or by burning it in a combined cycle gas turbine, then the complete cycle of the hydrogen as a form of energy storage is obtained. Obviously, like any storage system, there are associated losses that will depend on the technology of storage and reconversion into electricity, but which are normally around 50%.

Even with these losses, considering that it is about being able to store GWh of energy for months, it is an attractive option. If it is also taken into account that the generated hydrogen can be used as a green fuel for the transport, the option is already considered ideal.

The green hydrogen in the European energy system of the future

The green hydrogen is called to play a major role in the European energy system of the future. In the coming decades, the hydrogen will progressively replace the fossil fuels. Thanks to its versatility to be able to be produced with surplus renewable electricity and to be used both to store energy and as fuel for transportation, they will make it an element of relationship between the electricity, gas, residential, industrial and transport sectors.