AleaSoft, April 30, 2020. In April, the prices of the European electricity markets were the lowest of at least the last six years. In the last days of the month, prices recovered with respect to those of the beginning of the second fortnight, but still remain below €30/MWh. Brent oil and gas futures also recovered in recent days, although they remain at low levels. Wind energy and solar energy production increased in the last days of April, with the exception of the German market.

The year‑on‑year evolution of solar energy production shows a clear increase in production in this month of April compared to April 2019 in the main solar producers in Europe. Taking into account the data up to April 29, the highest increases are found in Italy, 44%, and the Iberian Peninsula, 34%, followed by Germany and France with 26% and 21% growth, respectively.

The AleaSoft’s solar energy production forecasting for this week’s global indicates that the observed trends will be maintained, so that a drop in production is expected in Germany, and notable increases in both the Iberian Peninsula and Italy. 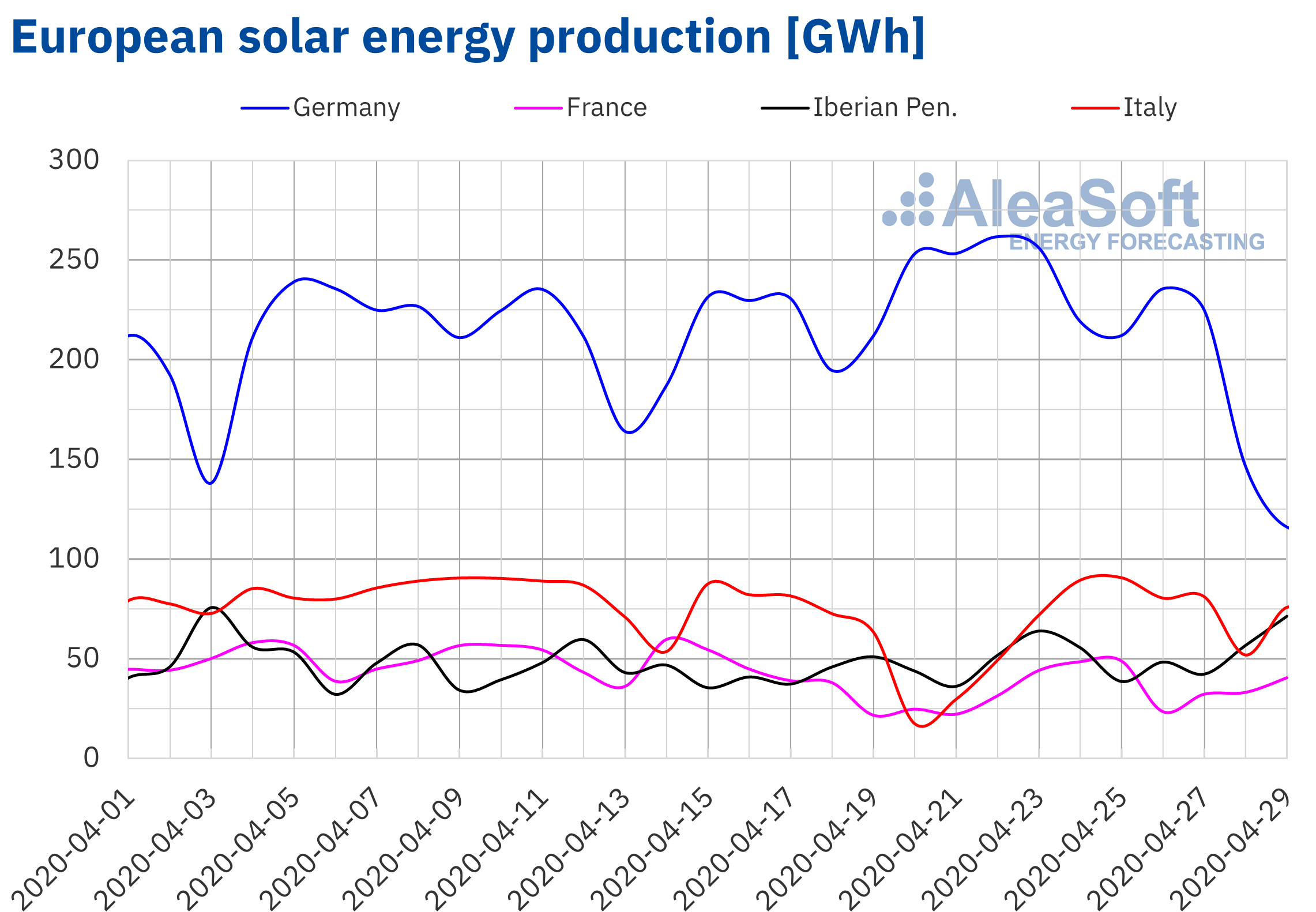 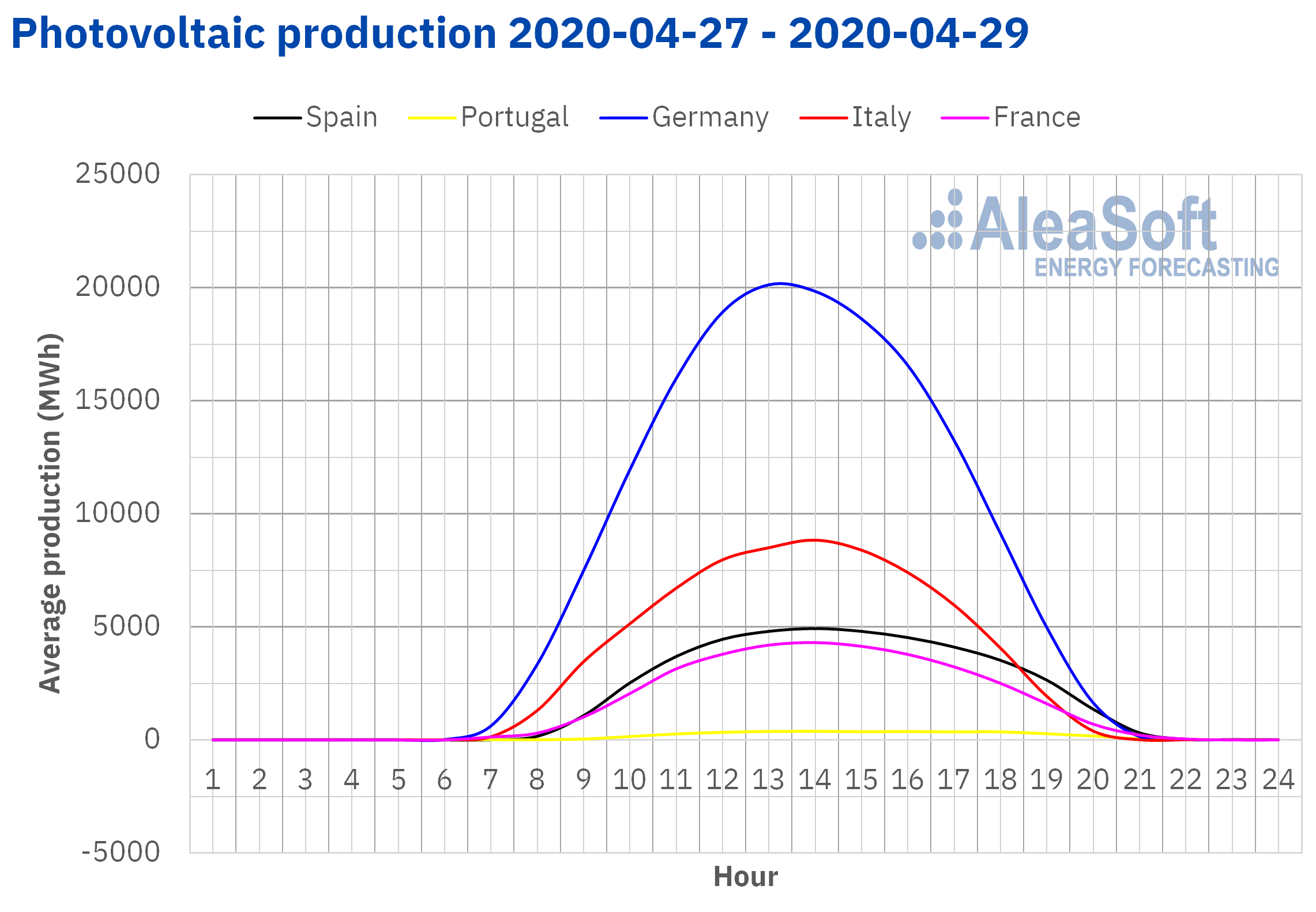 According to AleaSoft´s forecasts, wind energy production will recover in the rest of the week, and will end the week with very notable increases in all markets except in Germany where it will remain below the production registered the previous week. 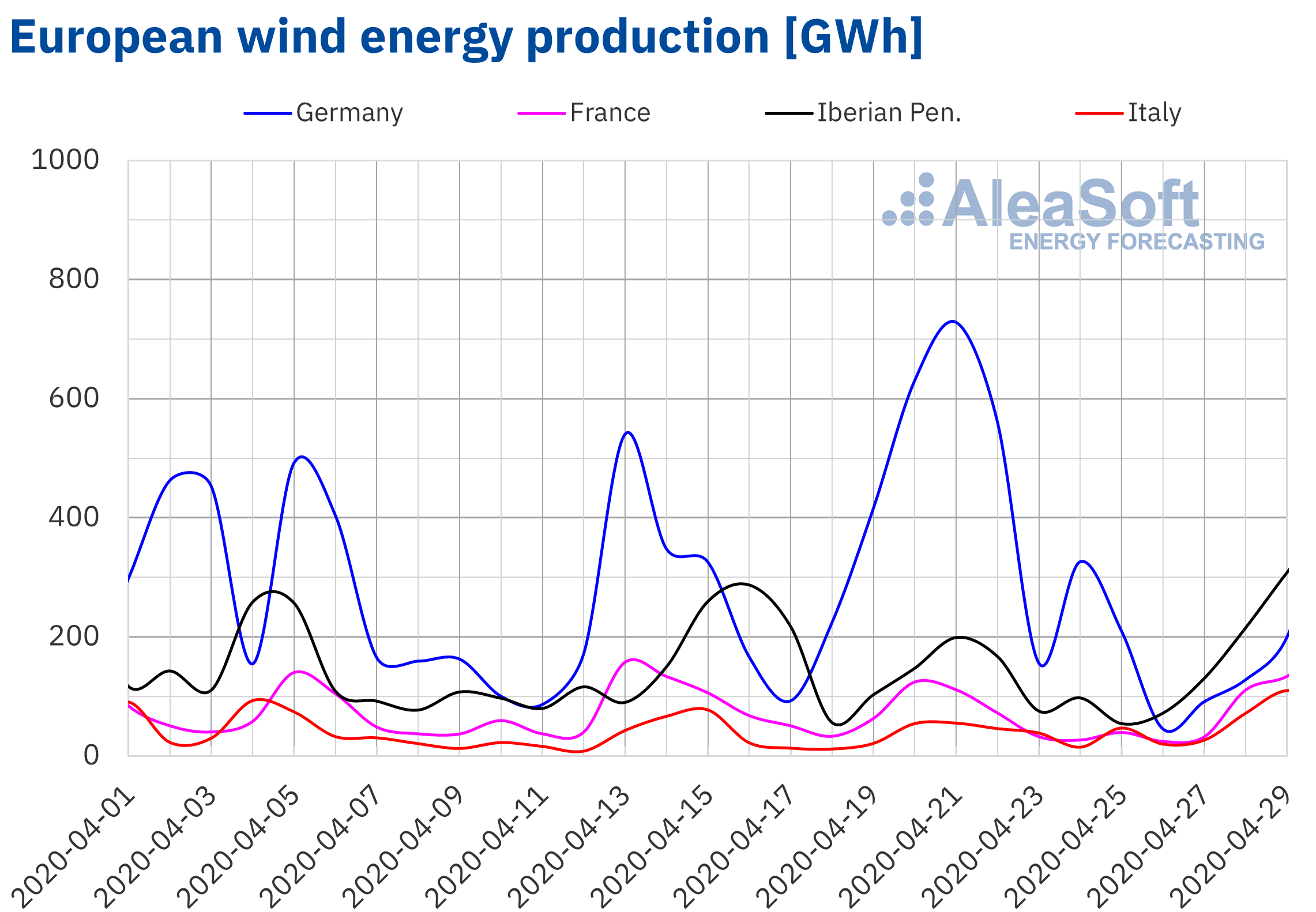 The electricity demand maintained a level close to last week during the first three days of this week in some European markets. Average temperatures differed slightly between 0.1 °C and 1.6 °C in most markets, contributing to slight variations in demand. In France, Spain and Italy the differences were 0.6%, 0.2% and ‑0.6% respectively. On the other hand, in Portugal and Germany markets, the demand registered variations of ‑2.0% and 2.0% respectively. For the next few days, demand is expected to drop on May 1 holiday, while, as the end of lockdown in the different countries progresses, it will recover. AleaSoft’s electricity demand observatories are available to closely monitor the evolution of European electricity demand. 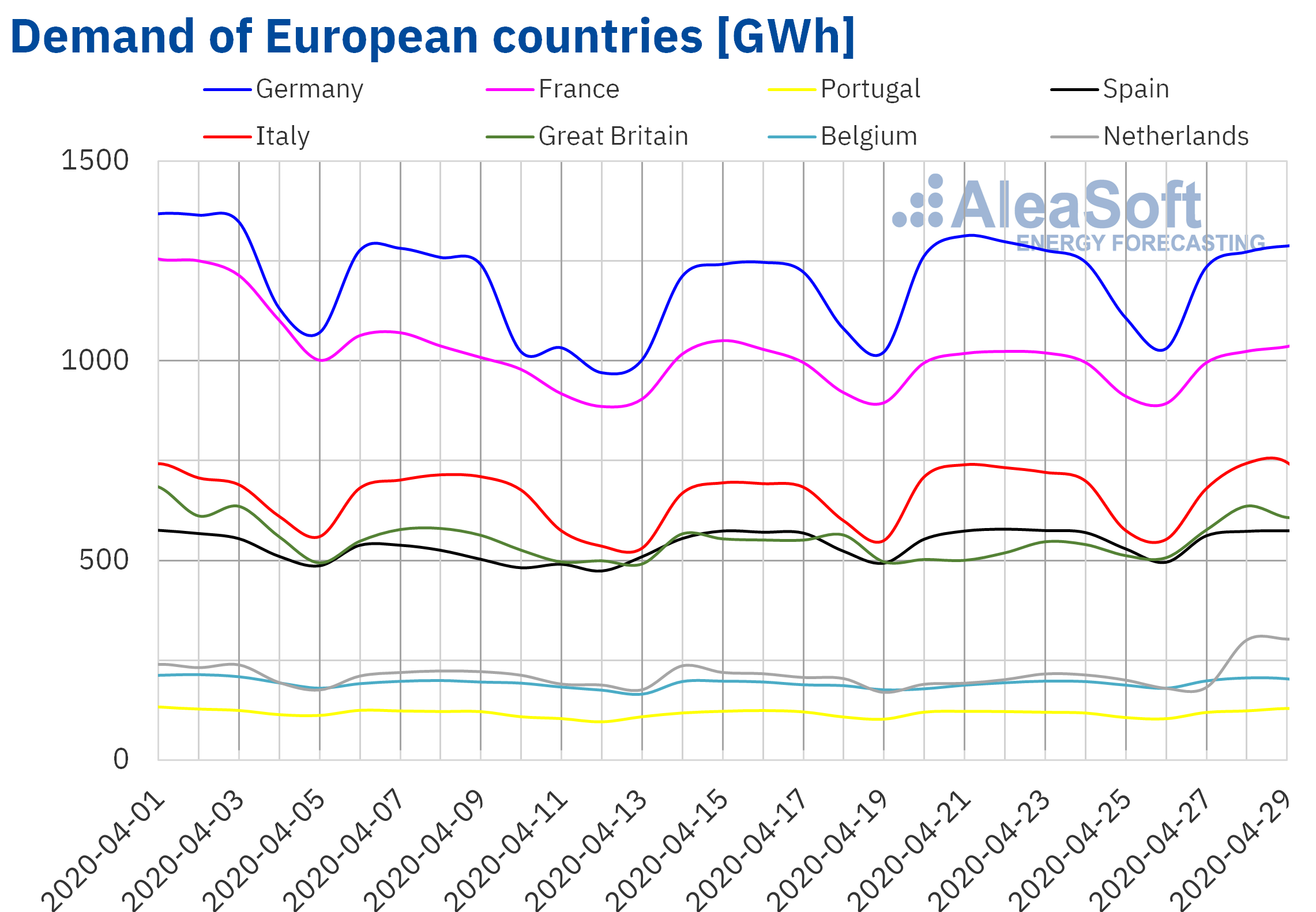 Mainland Spain’s electricity demand increased just 0.2% from Monday to Wednesday this week compared to the same period last week of April 20. It was precisely with respect to Monday, April 20, that the greatest difference of these three days was recorded, increasing 8.6 GWh on April 27. 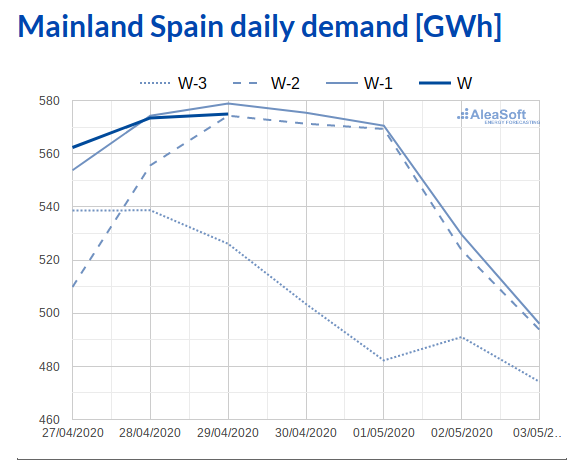 Solar energy production in mainland Spain, which includes both photovoltaic and solar thermal technologies, increased by 18% during the first three days of this week compared to last week’s average. Until April 29, production with this technology was almost 16% higher than in April 2019. The analysis carried out at AleaSoft indicates that at the end of this week solar energy production will be higher than that registered last week.

Wind energy production in the first three days of this week increased 82% compared to last week’s average. On the contrary, comparing the days elapsed in April with the same period of 2019, the generation from this renewable source was 27% lower. For this week, wind energy production is expected to be in total greater than last week, according to the analysis carried out at AleaSoft.

Nuclear energy production in the first three days of this week decreased 25% compared to the average registered in the same period last week. The cause of this decrease is the disconnection of the electricity grid of unit I of the Ascó nuclear power plant to start the activities corresponding to refueling number 27. This refueling was postponed from April 18 to 28 of this month as a measure in the face of the current pandemic situation. In this way, the Ascó I plant joins unit 1 of the Almaraz nuclear power plant, which remains disconnected. 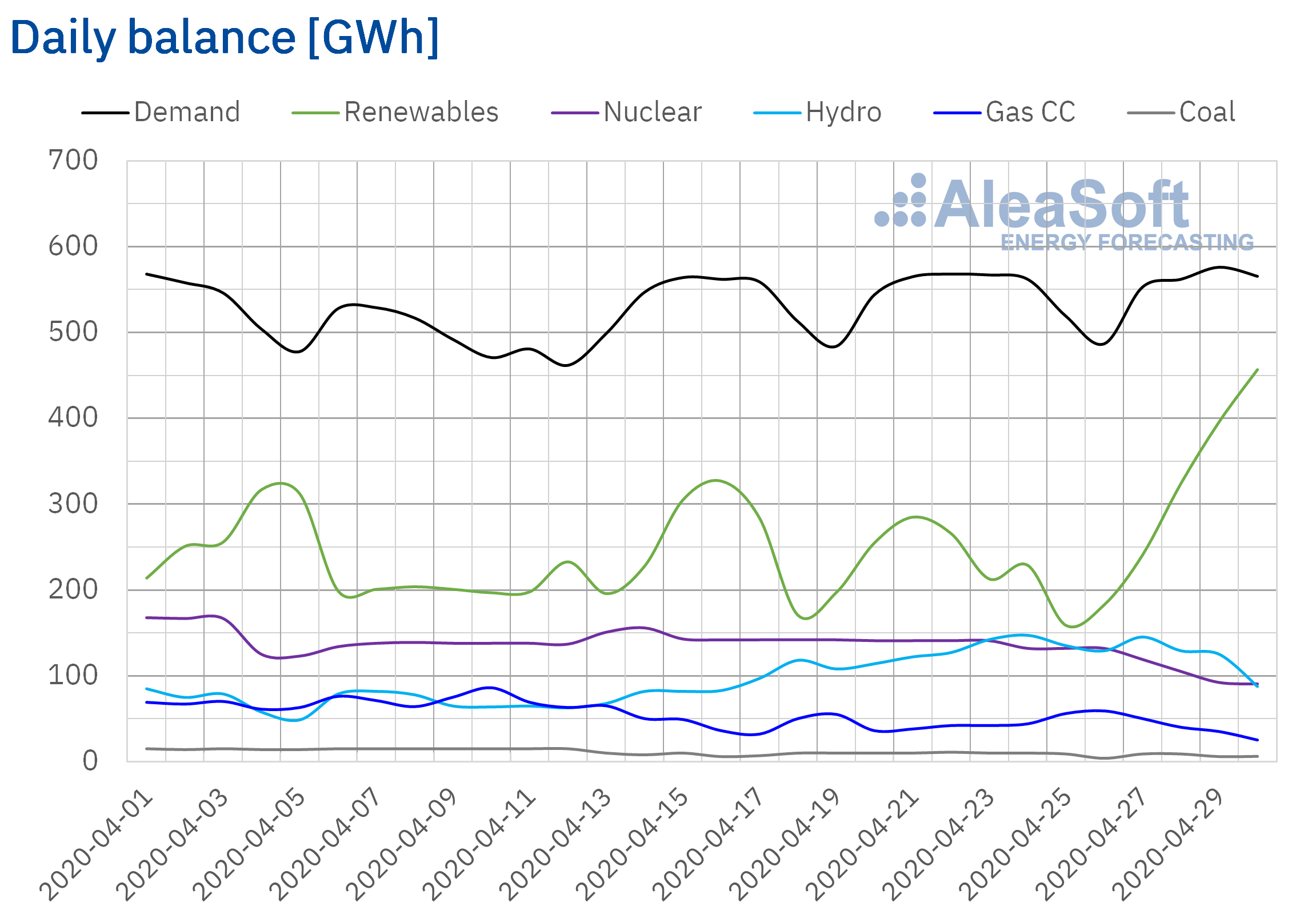 Hydroelectric reserves currently have 15 301 GWh stored, according to data from the last Hydrological Bulletin of the Ministry for the Ecological Transition and the Demographic Challenge, which represents an increase of 343 GWh compared to the previous bulletin.

The first four days of the week of April 27, the prices increased in most European electricity markets compared to those registered the same days of last week. The exception was the IPEX market of Italy, where there was a decrease of 13%. On the other hand, the largest price increases, of 327% and 324%, occurred in the EPEX SPOT markets of Germany and Belgium, respectively. These high percentage increases are due to the negative prices that were registered between April 20 and 22 in these markets. On the other hand, in the MIBEL market of Spain and Portugal there was the lowest price increase, of 18% in both cases. In the rest of the markets the increases were between 43% of the EPEX SPOT market of the Netherlands and 68% of the EPEX SPOT market of France, markets that also registered very low prices between Monday and Wednesday of the previous week.

Even with these growth rates, the prices continue at very low levels, below €30/MWh. The market with the lowest average price so far this week, of €8.23/MWh, was the Nord Pool. While the markets with the highest average prices were the N2EX of Great Britain and the IPEX, with €29.00/MWh and €25.61/MWh respectively.

The increase in electricity demand in most markets and, in the case of Germany, low levels of renewable energy production in the first days of the week, allowed the registered price increases. As a consequence, in the first days of this week, unlike the previous one, no negative hourly prices were registered in any of the markets analysed at AleaSoft.

But, compared to the month of April 2019, the registered decreases are even more spectacular. These are located between 87% in the Nord Pool market and 45% in the British market. In the rest of the analysed markets, year‑on‑year falls are around 60%. 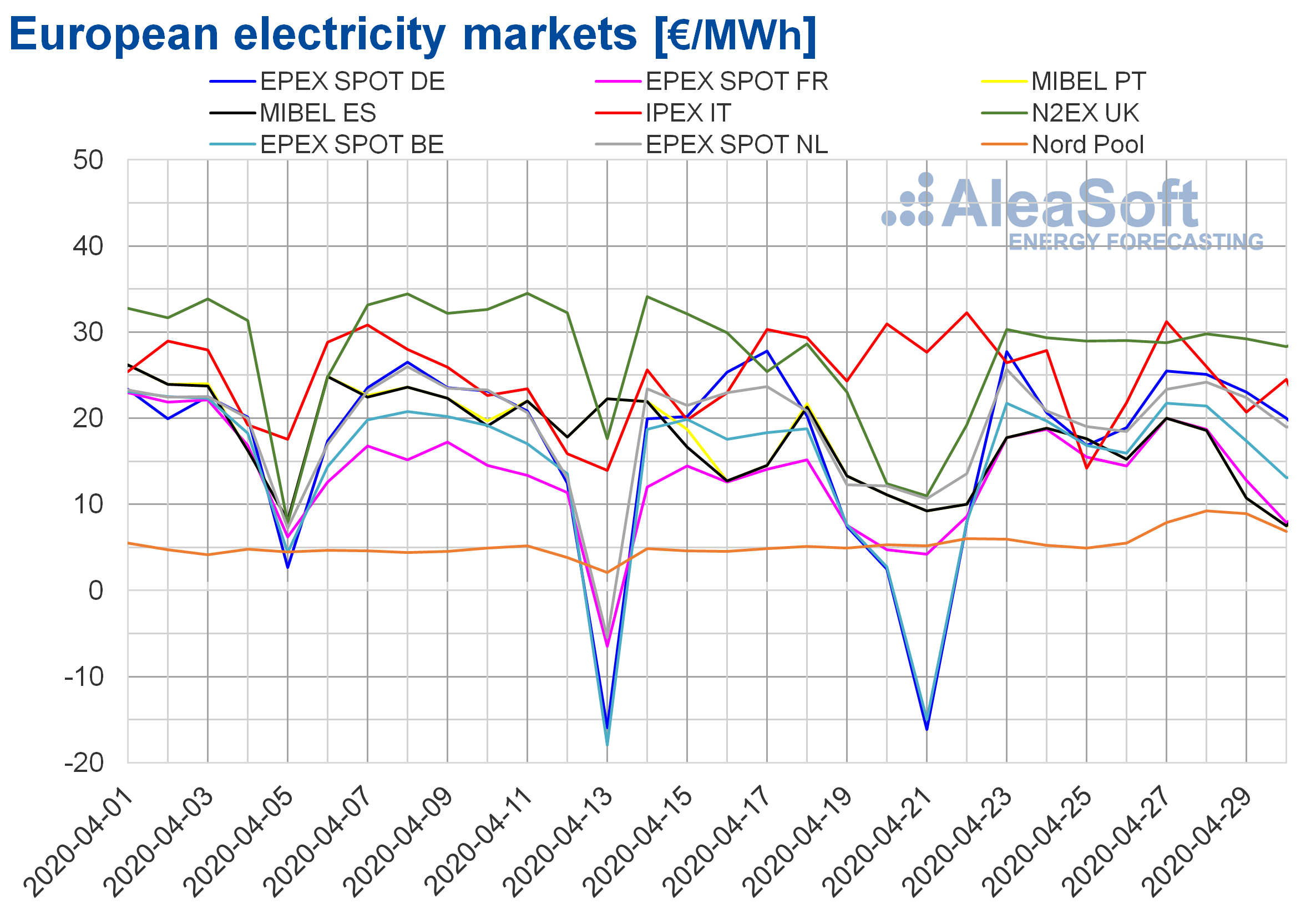 The AleaSoft’s price forecasting indicates that on the rest of the days of this week, the electricity prices will drop in most markets due to a decrease in demand because of the holiday of Friday, May 1. In addition, it is expected that the levels of production with renewable energies will be high.

The prices for the first four days of this week in the MIBEL market of Spain and Portugal increased by 18%, compared to those registered the same days of last week. Despite the increase, in both cases, the average price for the period from April 27 to 30 was only €14.19/MWh. This was the lowest price of these days in the analysed European markets, with the usual exception of the Nord Pool market of the Nordic countries.

The evolution of the prices was conditioned by the progressive increase in renewable energy production during the first days of the week, which favoured that the electricity prices were decreasing in the MIBEL market.

The AleaSoft‘s price forecasting indicates that at the end of the week the weekly average price will be lower than that of the previous week due to the high levels of renewable energy production of this week, the increase in temperatures in the last days of the week and the decrease in demand associated with the fact that Friday, May 1, is a holiday. 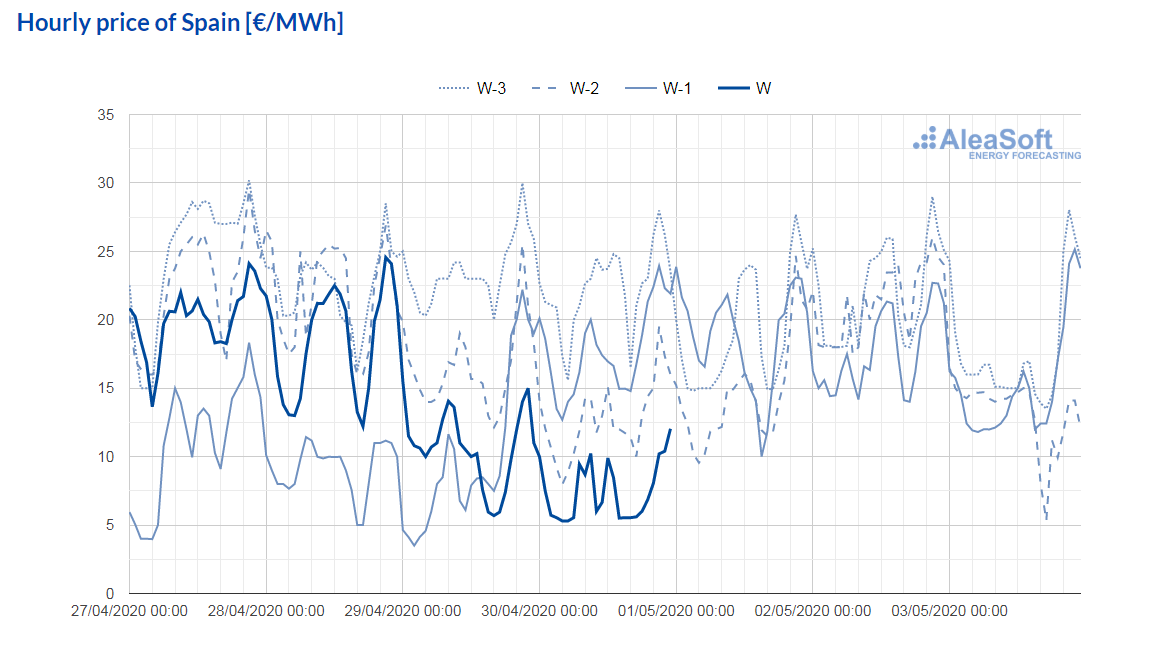 The electricity futures markets so far this week registered almost general drops in their prices for the Q3-20 product. The exceptions to these drops in the markets analysed at AleaSoft were the ICE market and the NASDAQ market of the Nordic countries, where prices increased, but continued to be the lowest on the continent, with a large difference with values below €9/MWh. The OMIP market of Spain and Portugal, together with the ICE market of Belgium, were those with the greatest reduction in their price, with a drop of 4.6%. On the other hand, the Italian EEX market was the one that underwent the least change in yesterday’s session, April 29, compared to the end of the previous week, with a variation of 0.7%.

Regarding the prices of electricity futures for the next year, 2021, the decrease was extended to all the markets analysed at AleaSoft. The OMIP market of Spain and Portugal, which was the one with the greatest decrease for the quarterly product, in the case of this annual product is the one with the lowest change with a fall of 0.5%. Outside the Iberian region, the drops exceeded 1%, with the exception of the NASDAQ market in the Nordic countries.

The Brent oil futures prices for the month of June on the ICE market began this week with a settlement price on Monday, April 27, of $19.99/bbl, 22% lower than the previous Monday. But on Tuesday a price recovery began and on Wednesday, April 29, a settlement price of $22.54/bbl was recorded, 11% higher than Wednesday last week. In today’s session, prices have remained above $23/bbl, and in some moments above $25/bbl.

This trend is influenced by news of production cuts by Russia and Norway to counteract the decline in demand due to the coronavirus pandemic, as well as by signs of recovery in demand in the United States.

The start of the production cuts agreed by OPEC+ in May might help to sustain the price recovery. In addition, the start of releasing the lockdown in some European countries will increase demand.

The first days of this week, the TTF gas futures prices on the ICE market for the month of May recovered from the historical low recorded on the previous Friday. On Tuesday, April 28, the maximum settlement price so far this week was €6.15/MWh. While on Wednesday the price fell again, 2.2% in comparison with Tuesday, to €6.01/MWh.

On the other hand, prices of API 2 coal futures on the ICE market for May 2020, the first days of this week, remained below $40/t. The minimum settlement price so far this week, at $38.45/t, was that of Tuesday, April 28, which was 10% lower than the previous Tuesday and the lowest in the last two years. Oversupply and news about intentions to increase carbon dioxide emission reduction commitments in Europe are driving coal prices down.

As for CO2 emission rights futures prices on the EEX market for the December 2020 reference contract, the first days of this week were very stable. Despite registering slight daily decreases, the variation in the first days of the week was only €0.09/t. The settlement prices went from €20.28/t on Monday, April 27, to €20.19/t on Wednesday, April 29. But today’s session has seen prices below €20/t. 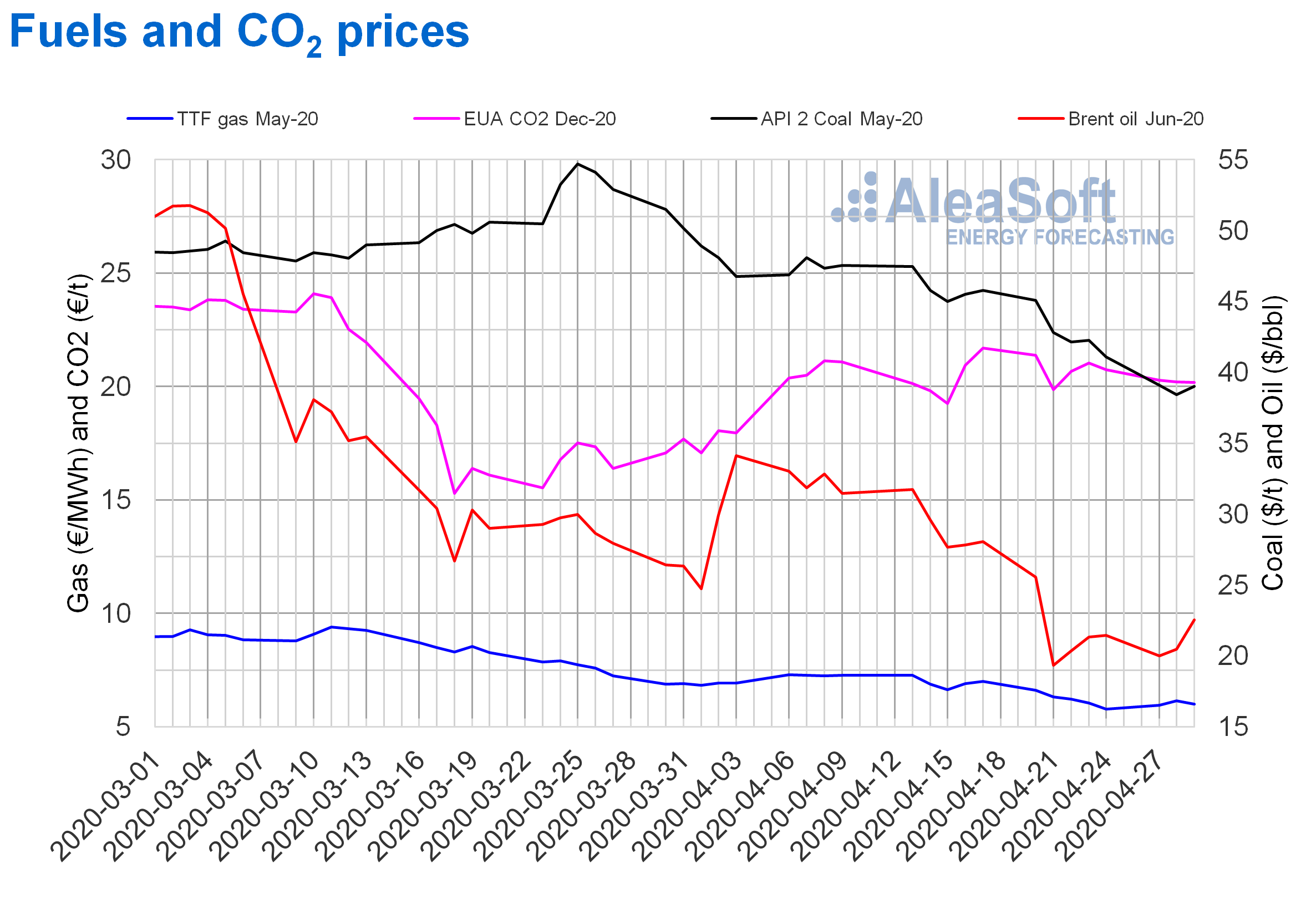 The monitoring of the MIBEL market in Portugal and EPEX SPOT market in Belgium was added to the Energy Markets Observatories on AleaSoft’s website. These markets were added to those already present: MIBEL of Spain, IPEX of Italy, N2EX of Great Britain and EPEX SPOT of Germany and France.

At the observatory of Spain, in addition to demand and prices, it is now possible to follow the evolution of wind, photovoltaic and solar thermal energies and the temperature.

In parallel, the second part of the webinar “Influence of the coronavirus on energy demand and electricity markets in Europe (I)” is being prepared. This second webinar will take place on May 21st and, in addition to providing updated data and forecasts, will also focus on the financing of renewable energy projects and their viability at this time.