The prices of the Brent oil futures for the month of December in the ICE market began an upward trend in the last days of the past week. After starting the week of October 7 with very stable values, on Thursday 10 the price increased 1.3% compared to the previous day and on Friday 11 the increase was 2.4% compared to Thursday’s value. With these increases, the settling price on Friday, October 11, was $60.51/bbl, $2.16/bbl above the price reached on Monday, October 7. The price corresponding to last Friday is the highest so far this October. This change in trend is related to a new intensification of the tensions in the Middle East, occurred in the middle of last week. However, the possibility of an upcoming trade agreement between China and the United States could reverse this trend.

The prices of the TTF gas futures in the ICE market for the month of November ended the week of October 7 with an upward trend. After the decrease on Wednesday, October 9, of 0.4% compared to Tuesday, both Thursday and Friday of last week the prices experienced increases of 1.8% over the previous day. At the end of the week, the price reached on Friday, October 11, was €16.14/MWh, being the highest value of the week. This upward trend is influenced by the prospect of lower temperatures and the forecast of lower wind energy production.

As regards the prices of the API 2 coal futures in the ICE market for the month of November, after the maximum value of last week of $63.10/t was reached on Tuesday, October 8, the prices began a downward trend until, on Thursday, October 10, the value was $62.00/t. This price is only $0.20/t higher than the minimum value of the week, recorded on Monday, October 7. In turn, on Friday, October 11, the price increased by 0.3% compared to Thursday, closing that day at $62.20/t.

The prices of the CO2 emission rights futures in the EEX market for the December 2019 reference contract increased the last days of the past week. On Wednesday, October 9, there was a change in trend in the evolution of the prices, which had been declining since the beginning of the month. From that day on, the prices began to increase. At the end of the week, on Friday, October 11, the settling price was €24.45/t, 6.5% above the value reached on Friday of the previous week of €22.95/t, but still €0.59/t below the price of Tuesday, October 1, when the highest price was recorded so far this month, €25.04/t. 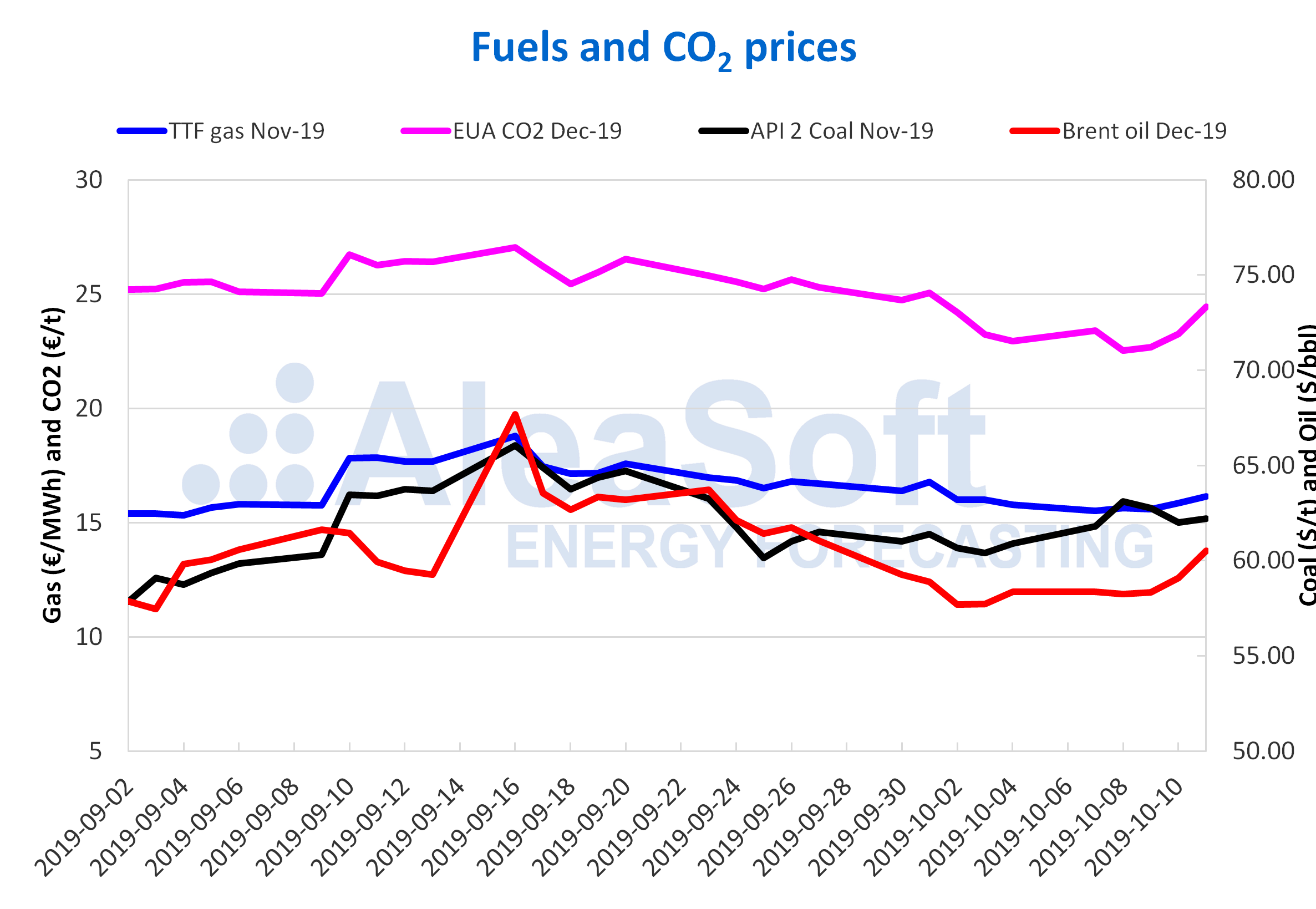 The prices of most European electricity markets declined during the last week compared to the week of September 30. On the other hand, the IPEX markets of Italy and the Nord Pool market of the Nordic countries increased 1.2% and 6.0% respectively, in relation to the same period. The EPEX SPOT market of Germany, with a weekly average of €30.43/MWh, was the one with the lowest price in the analysed markets and showed a 17% drop compared to the average price of the week of September 30. The rest of the markets experienced variations between ‑14% and ‑3.0%.

The electricity demand in the week that ended recently behaved differently in the countries analysed. Germany was the one with the greatest variation in the electricity demand, with an increase of 7.1%, mainly due to the recovery in the demand after the national holiday on October 3. In contrast, in Italy there was almost no variation in demand despite having cooler temperatures, 1.7°C below the average of the previous week.

The prices for this Monday, October 14, despite showing upwards, are still lower than those reached on Monday, October 7. The Italian market continues to be the one with the highest price in Europe, with a daily average of €60.61/MWh. On the other hand, the EPEX SPOT market in Germany was the one with the lowest price, closing at €35.56/MWh. The rest of the markets closed with prices ranging between €36/MWh and €43/MWh. 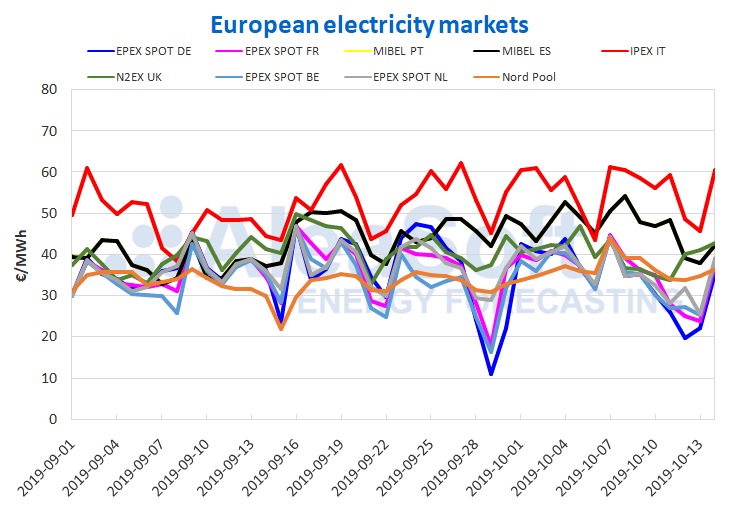 The electricity futures prices for the first quarter of 2020 behaved heterogeneously during the past week. The Spain’s futures, both in the EEX and OMIP markets, experienced decreases of 0.1% and 0.2%, respectively. In the same OMIP market, the Portugal’s futures for this product fell by 0.2% as the Spain’s futures. On the other hand, in the rest of the markets analysed by AleaSoft, the futures for the following quarter registered increases during the past week, the most notable being that of France in the EEX market and those of Belgium and the Netherlands in the ICE market, all of them of 3.3% with respect to the settling value of the previous week.

In the case of the European electricity futures for the year 2020, all the markets analysed by AleaSoft showed price increases. The most discreet increase was that of the OMIP market, both for Spain and Portugal, which registered a 0.5% rise. On the other hand, the market with the highest growth in this product was that of France in EEX, which closed last week with €51.26/MWh, thus registering a 3.6% increase compared to Friday, October 4.

The wind energy production continued to increase last week in most European countries. Portugal and Germany were the countries where the production with this technology increased the most, by 50% and 42% respectively, compared to the week of September 30. While, on the contrary, there was a 29% drop in wind energy production in Italy. The AleaSoft forecasts for this week estimate strong declines in productions in Germany, France, Portugal and Italy. On the contrary, the growing trend is expected to remain in Spain. 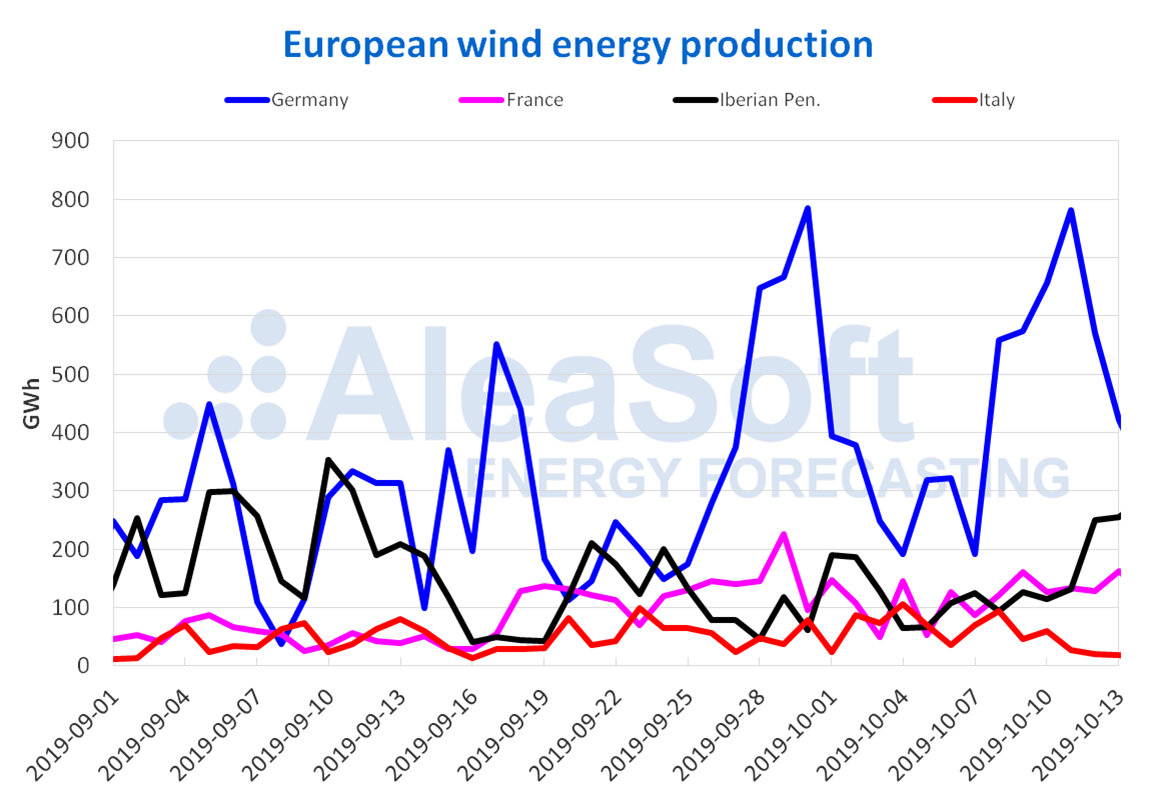 The solar energy production, which includes photovoltaic and solar thermal, decreased by 19% in Spain and 2.9% in Italy last week compared to the week of September 30. In Germany, on the contrary, the production increased by 15%. For this week, in AleaSoft a moderate fall in the solar energy production of Italy and Spain is expected, and in Germany the generation with this technology is expected to be a little higher than last week. 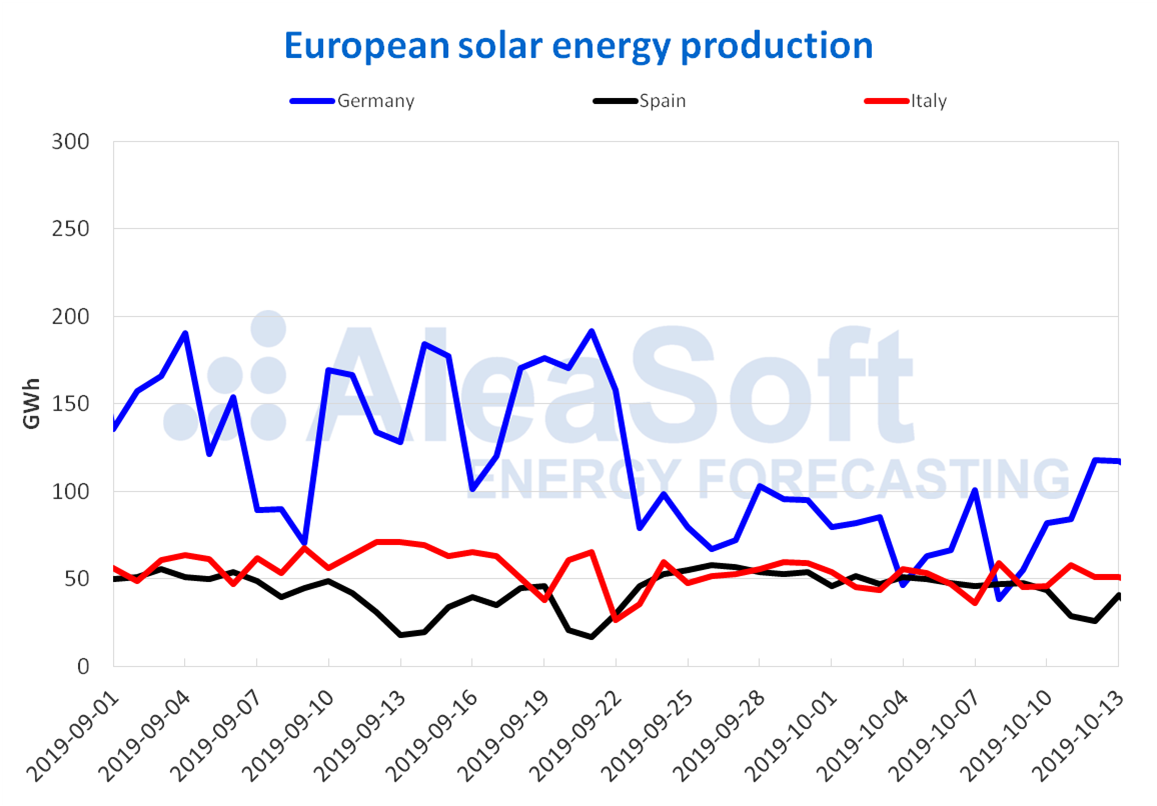 PrevAnteriorPrice drop of the European electricity markets due to the increase of the wind energy production
SiguienteAleaSoft participates at the UNEF Solar Forum 2019: The PV as the main element of the energy modelNext
Menu
Facebook-f Twitter Linkedin Instagram