AleaSoft, October 10, 2019. At AleaSoft the main European electricity markets were analysed so far this week of October 7, in which the prices fell, due to the increase in the wind energy production in several countries. On the other hand, the set of photovoltaic and solar thermal energy production fell compared to last week’s average. In the fuel and CO2 futures markets, the coal prices are the only ones that rose, the rest remained stable or with prices down.

The European markets experienced a general drop in prices during this week. The decline in figures is more noticeable when comparing today’s price, Thursday, October 10, with that of Monday of this week, October 7. The electricity markets analysed by AleaSoft presented an average decrease of 19% between these two days. Where it is the most notable is in the EPEX SPOT market in Belgium, which lowered its price between these two days by 32%. The MIBEL market in Spain and Portugal, which showed the lowest fall, reduced its price between these days by 7%.

This general decrease in the prices of the electricity markets is due to a significant increase in the wind energy production compared to the average values of last week. In AleaSoft it is expected that the price of most of the European electricity markets, with the exception of the German market, recovers tomorrow, October 11, when the effect of the wind energy production peak passes, and then it falls again in the following days, due to the decline in the national demands that weekends involve.

This week, the group of lower priced markets is integrated by the Nord Pool market of the Nordic countries, N2EX market of Great Britain and the EPEX SPOT markets of France, the Netherlands, Germany and Belgium, although this week the Nordic market stopped being the one with the lowest price in Europe. In the group of markets with higher prices, the Italian IPEX market, which continues to lead the group, and the MIBEL market remain.

As a curious fact, today Thursday, October 10, the Belgian market has been the one with the lowest average price in Europe, with €30.11/MWh, its lowest value since the fall to negative values on August 29 and it is also the labour Thursday with the lowest price in that country for a little more than two years. 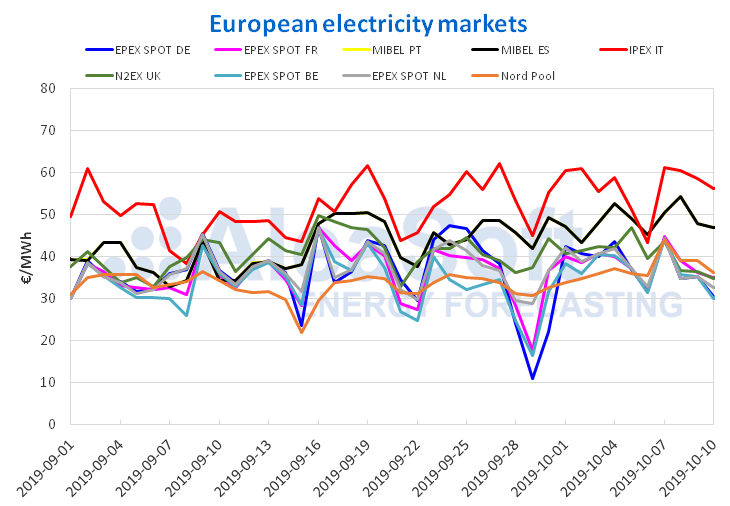 The Brent oil futures prices for the month of December in the ICE market remained stable the first days of this week. The prices ranged between $58.35/bbl, reached on Monday, October 7, and $58.24/bbl, on Tuesday, October 8. The maximum price variation observed this week corresponded to October 8, with a 0.2% decrease compared to the previous day. On Wednesday, October 9, the settling price was $58.32/bbl, only 0.1% higher than the price of Tuesday. This price stability is related to the wait until knowing which the result of the negotiations between China and the United States for the resolution of their commercial dispute is.

Since the beginning of this week, the TTF gas futures prices in the ICE market for the month of November presented lower values than those reached last week, continuing the decreasing trend they were experiencing since mid-September. The settling price of Monday, October 7, was €15.51/MWh, which is the lowest value so far this month. On Tuesday, October 8, the price rose 0.9% to €15.64/MWh and yesterday Wednesday, October 9, the settling price was €15.57/MWh, 0.4% lower than the one of Tuesday.

The first days of this week, the API 2 coal futures prices in the ICE market for the month of November continued with the upward trend that began at the end of last week. This price increase continued until Tuesday, October 8, when a value of $63.10/t was reached, 2.8% higher than the value reached on the same day of last week. However, on Wednesday, October 9, the price dropped 0.6% compared to the previous day, to $62.75/t.

The CO2 emission rights futures in the EEX market for the reference contract of December 2019, started this week with a price of €23.41/t, 2.0% higher than the settling price of Friday, October 4. However, on Tuesday, October 8, the price fell to €22.53/t, which is the minimum value reached so far this month and is 10% lower than the corresponding value on the same day of last week. Yesterday, Wednesday, October 9, the price experienced a 0.6% rise compared to the price of Tuesday, standing at €22.67/t.

The European electricity futures prices for the first quarter of 2020 remained stable in the middle of this week compared to Friday, October 4. The markets with the greatest variation were ICE and NASDAQ of the Nordic countries, which closed yesterday Wednesday, October 9, 3.5% lower than the previous Friday. The rest of the markets varied between ‑0.9% and 0.7%.

The European electricity futures for the year 2020 behaved similarly to futures for the first quarter of 2020. In this case, the ICE and NASDAQ markets of the Nordic countries were also the ones that presented the greatest variation followed by the EEX and ICE markets of UK. In general, the differences between the end of yesterday, Wednesday, October 9 and that of Friday, October 4, are between ‑1.9% and 1.2%. 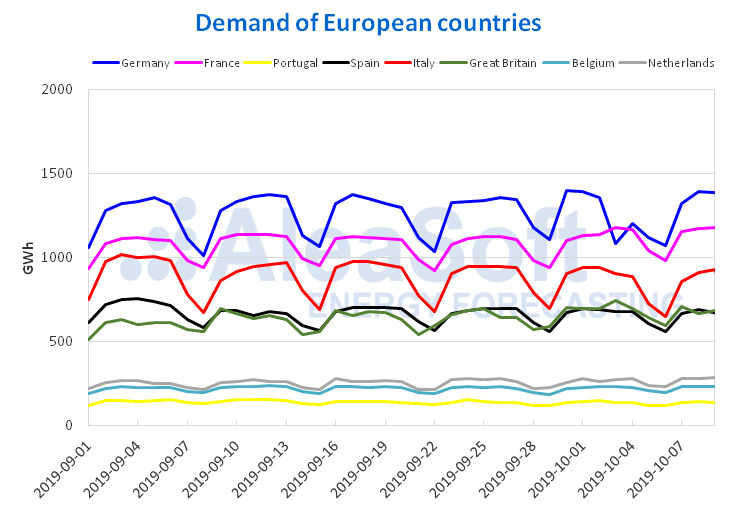 The average wind energy production experienced an increase from Monday to Wednesday of this week in almost all Europe, except in Spain, where there was a decrease of 3.9% compared to last week’s average. In percentage terms, Portugal was the country of the highest increase with 30%, followed by France with 19%. Germany had the highest increase in absolute terms, whose value was 64 GWh and represented an increase of 17% over the average values of last week. 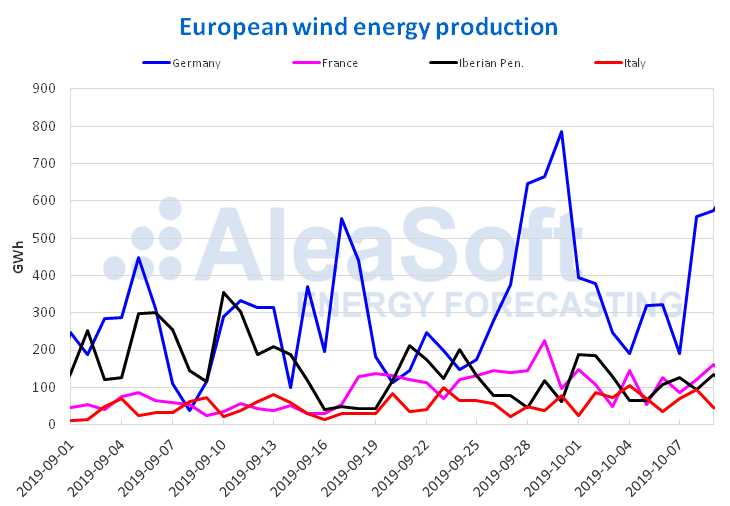 The solar energy production, which includes photovoltaic and solar thermal, decreased in the three analysed countries compared to the average values of last week. In Germany it fell 13%, 5.5% in Spain and 6.4% in Italy. 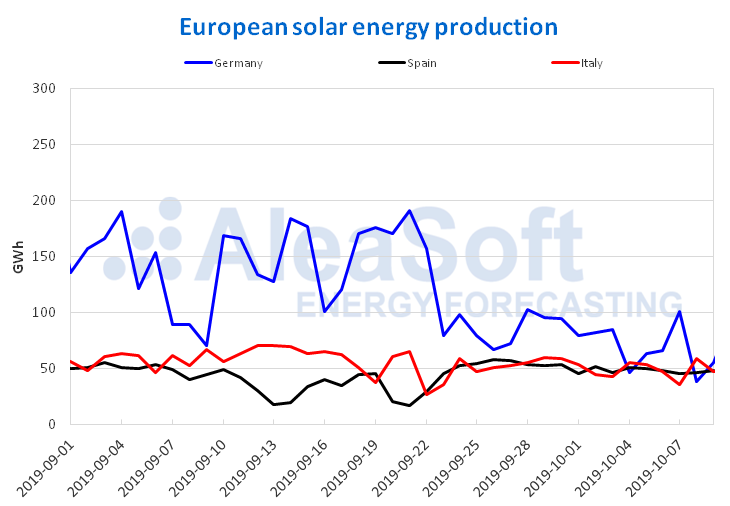