AleaSoft, February 26, 2021. The scheduled solar photovoltaic energy production in Spain reached a historical record in one hour of February 23. Although the real‑time data indicate that the registered production was lower, the levels were similar to those of some hours of May and September 2020, months in which the solar radiation is higher. The increase in photovoltaic capacity in recent times and the prospects of an increase in the future will mean that this technology will continue to break records in the coming months and years.

The solar photovoltaic energy production scheduled by REE for the hour 13 of February 23, of 6923.5 MWh, is the highest in the history so far.

According to the real‑time data, finally the generation of that hour was almost 400 MWh lower than that scheduled. But at the hour 14 of that same day, February 23, the highest hourly production with this technology in 2021 was registered, taking into account the data up to February 24. The production of that hour was 6688.33 MWh, a value very close to those registered in some hours of September or May 2020, months in which the solar energy radiation is greater than in February.

Analysis of the evolution of the solar photovoltaic energy production

To facilitate the analysis of the historical series of the solar photovoltaic energy production, the Energy DataBase (AleaApp)AleaApp Platform was used. If a broader range of the series is visualised, the spectacular growth that occurred from 2020 can be observed. The 50‑day moving average shows how the solar photovoltaic energy production will continue to increase from now on, in line with the increase in hours of sunshine and solar radiation.

The installed capacity of solar photovoltaic energy in Mainland Spain grew significantly in recent years, increasing 153% between December 2018 and January 2021. The outlook for the next few years is also very positive, taking into account that the objectives established in the NECP point to a capacity of almost 19 GW in the national territory in the year 2030. With all these elements, it is unquestionable that this technology will continue to set records in the coming months and years. 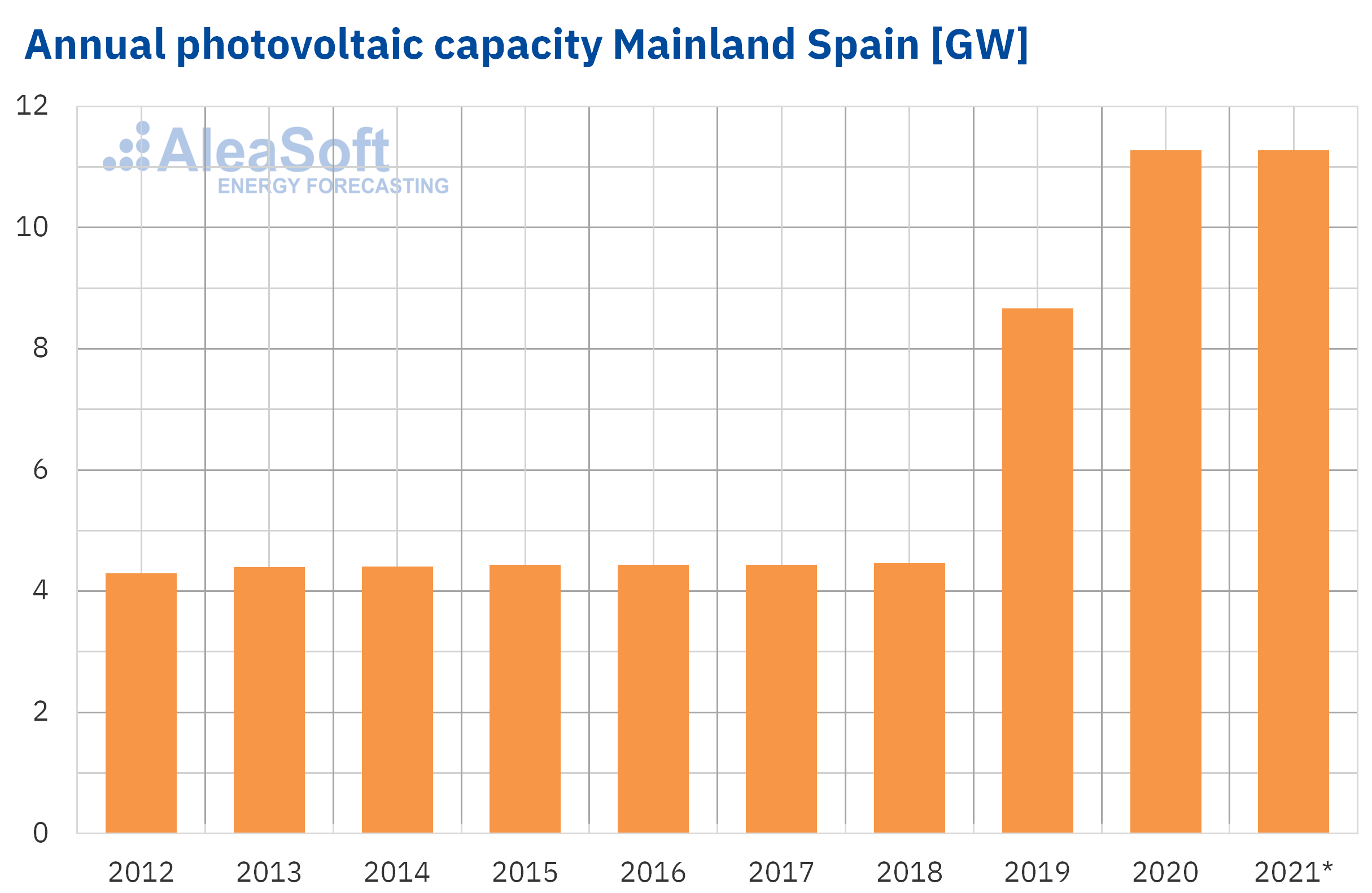 Source: Prepared by AleaSoft using data from REE.
Data up to December 31 of each year. For the year 2021 data up to January.

AleaSoft analysis of the evolution of the energy markets

On February 18, the AleaSoft webinar “Prospects for the energy markets in Europe from 2021 (III)” was held, in which speakers from Engie participated. In the webinar, special attention was paid to the PPA, one of the projects financing alternatives that will help meet the objectives of solar photovoltaic and, in general, renewable energy capacity during the coming years. The recording of the webinar can be requested at this link or by writing to webinar@aleasoft.com.

Continuing with the informative work that AleaSoft is carrying out to inform about the most current topics of interest in the electricity sector, a webinar is being organised to be held on March 18 with the participation of speakers from EY (Ernst & Young).

At AleaSoft, long‑term price forecasts are also made, which take into account the scenarios of new renewable energy capacity expected in the coming years. The reports have a horizon of up to 30 years with hourly breakdown and include the forecast of the price captured by the photovoltaic and the wind energy. These reports have complementary services associated to advise on the use of them.