Most European markets experienced decreases in solar energy production last week compared to the week of December 9. The biggest decline was in the Italian market, where it fell by 31%. The Iberian Peninsula and France suffered declines of 26% and 14% respectively. In the case of Germany, production with this renewable source increased by 16%.

The year-on-year variation from the beginning of December until yesterday, December 22, was 15% and 9.0% for Italy and the Iberian Peninsula respectively. On the other hand, in Germany there was an increase of 81% and in France the increase was of 14%.

In AleaSoft it is expected that during this week the solar energy production of Spain and Italy will recover, while in Germany it will decrease. 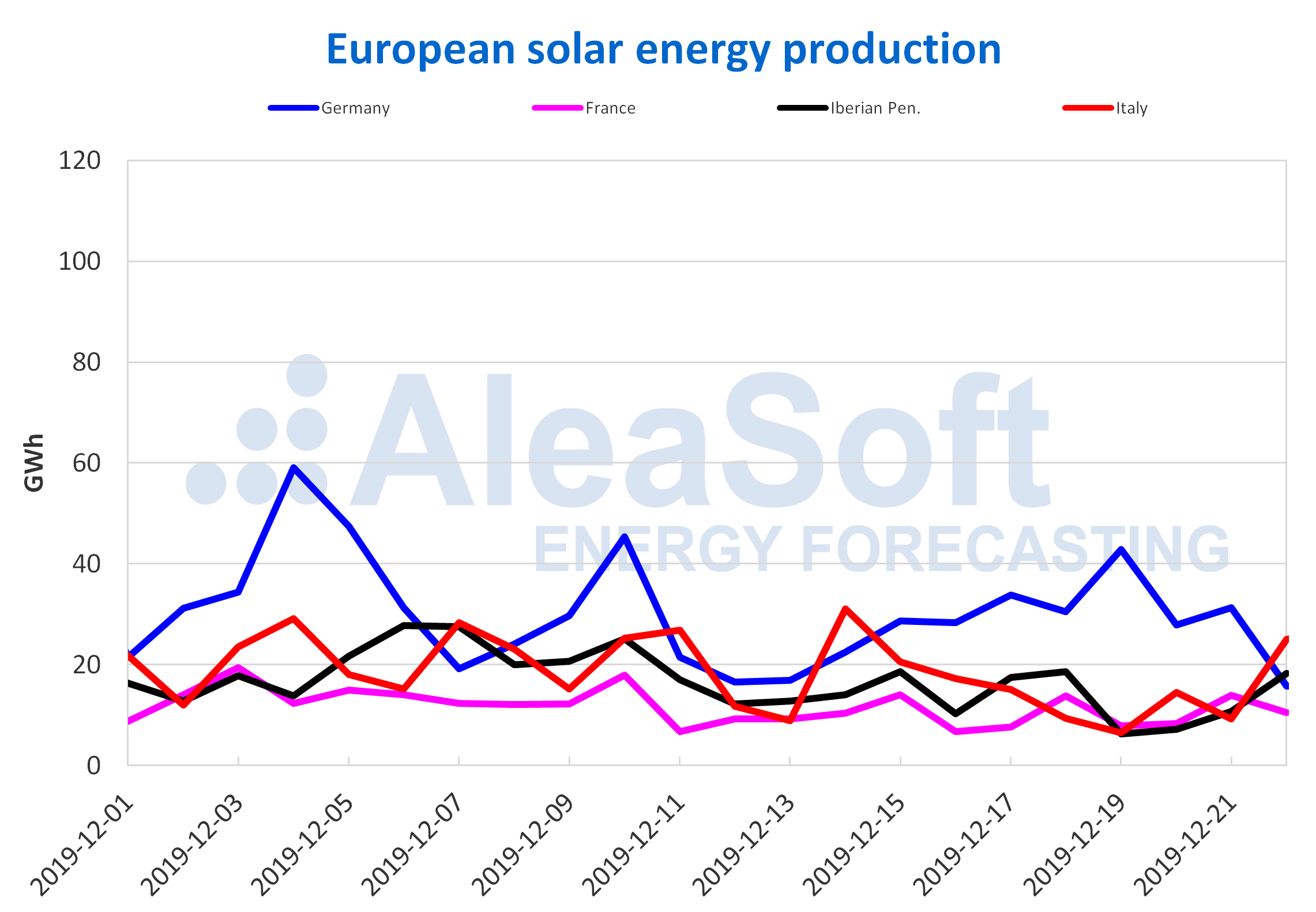 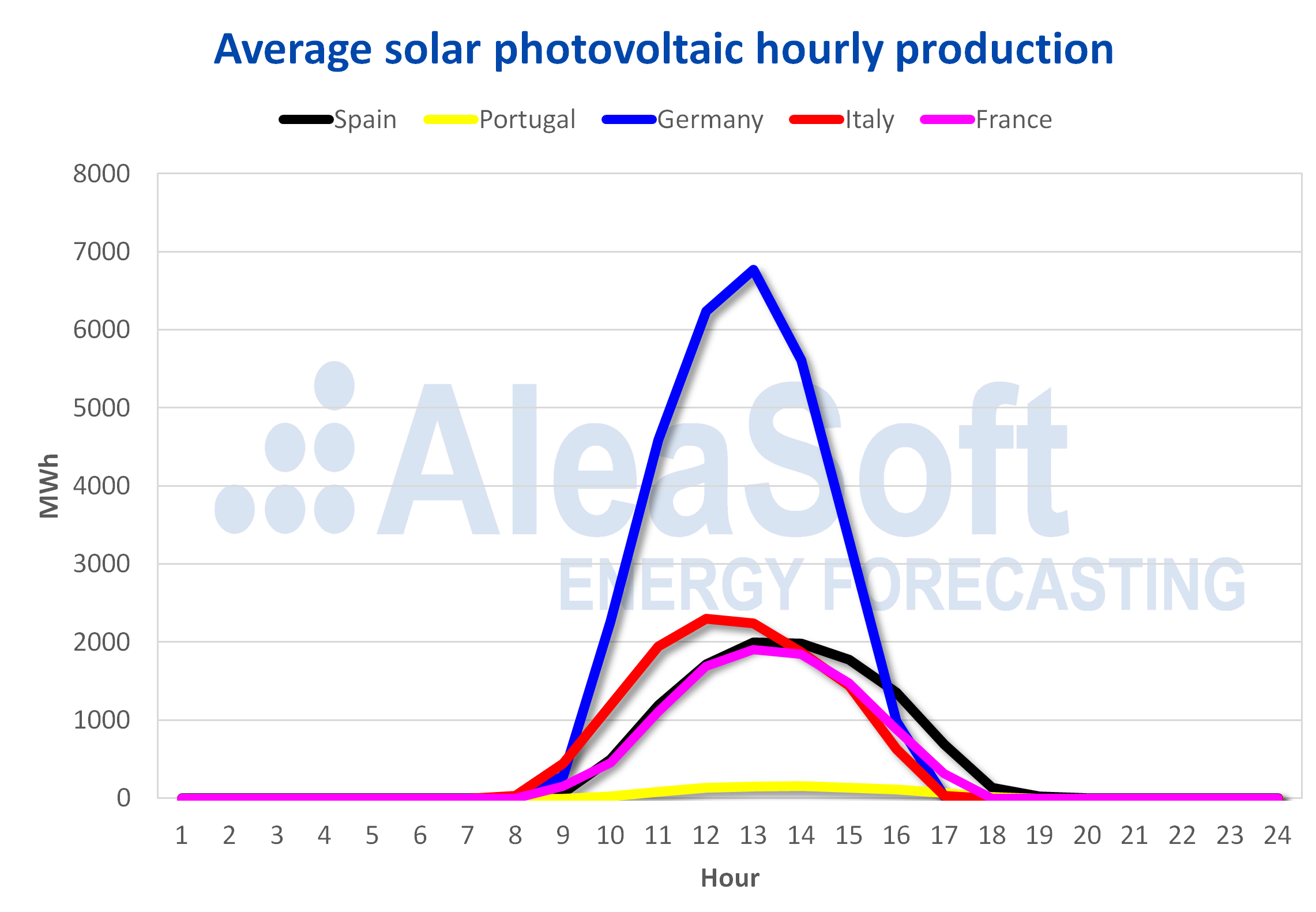 The wind energy production behaved heterogeneously last week. There were declines in the markets of Germany, France and Italy, with values of 28%, 6.7% and 6.3% respectively. Conversely in Spain and Portugal it increased for the second consecutive week, with variations of 25% and 3.2% respectively. In the case of Portugal, a weekly maximum production record since January 2018 was obtained, of 526 GWh.

For the first 22 days of December, the wind energy production increased year-on-year in the analysed markets. The most notable increases occurred in the markets of Portugal and Italy, of 59% and 54% respectively. In the rest of the markets the increases were between 8.9% and 30%.

In AleaSoft it is expected that the wind energy production of Europe’s markets will decrease overall for this week.

The results of Poland’s renewable capacity auction, held on December 5, were announced by the Energy Regulatory Office (ERO) of that country. The average auction price was zł208/MWh. It is estimated that the combined capacity between wind and photovoltaic was around 2.5 GWh, the latter taking most of the granted capacity, after new limitations for wind energy projects were introduced.

The German Federal Network Agency (Bundesnetzagentur) reported the results of the last auction of onshore wind power capacity, held on December 1. On this occasion 509.4 MW were granted and the average price was €61.10/MWh. 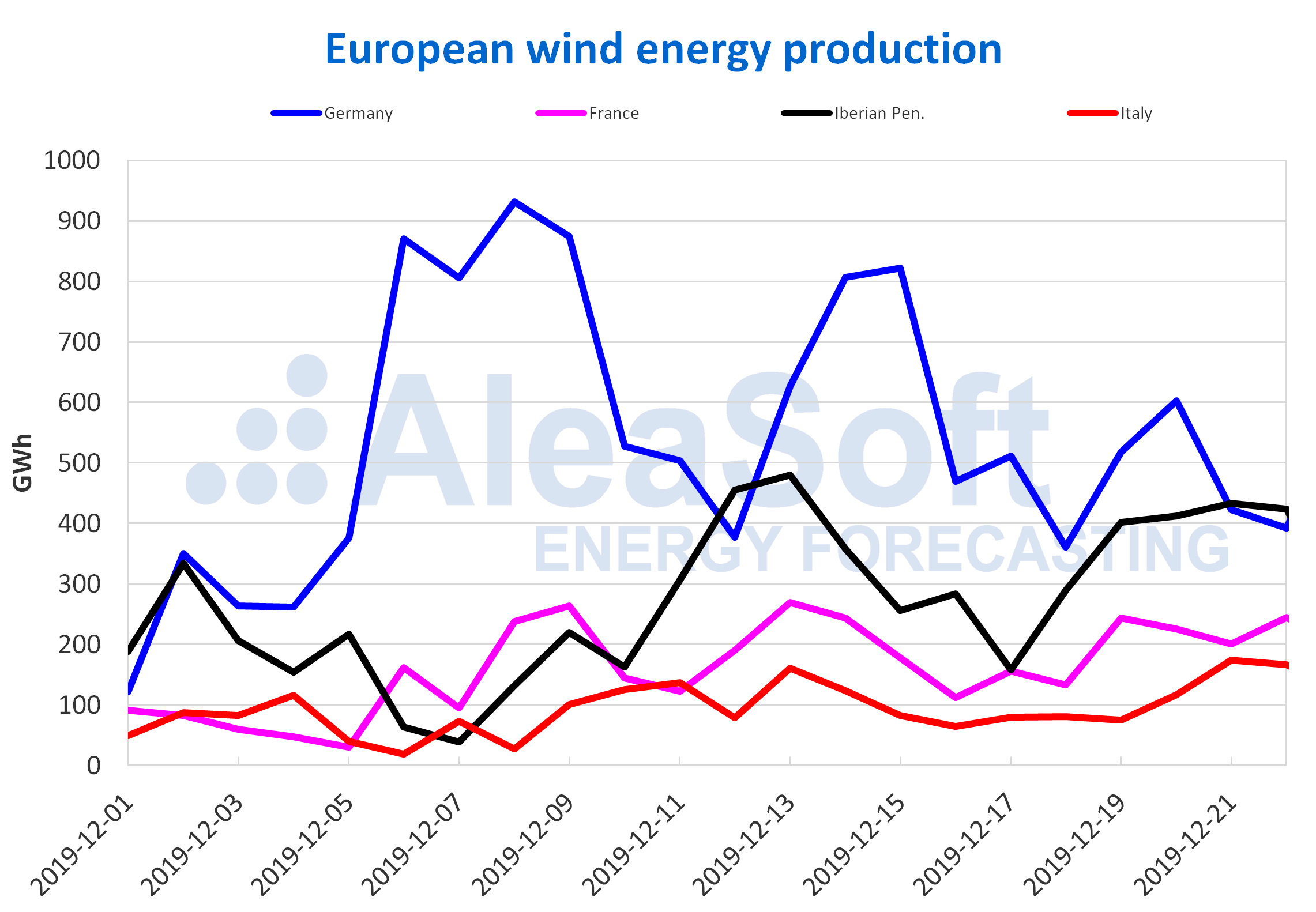 In the week just concluded there were higher average temperatures than the previous week throughout the European continent. As a consequence, electricity demand declined widely in all markets. The French market was conditioned by an increase in its average temperatures of 2.7 °C that caused a 10% decrease in its electricity demand. In Germany there was also a 7.6% drop and in Portugal the drop was 4.7%.

Because of the Christmas holidays effect, this week is also expected a reduction in European markets electricity demand. 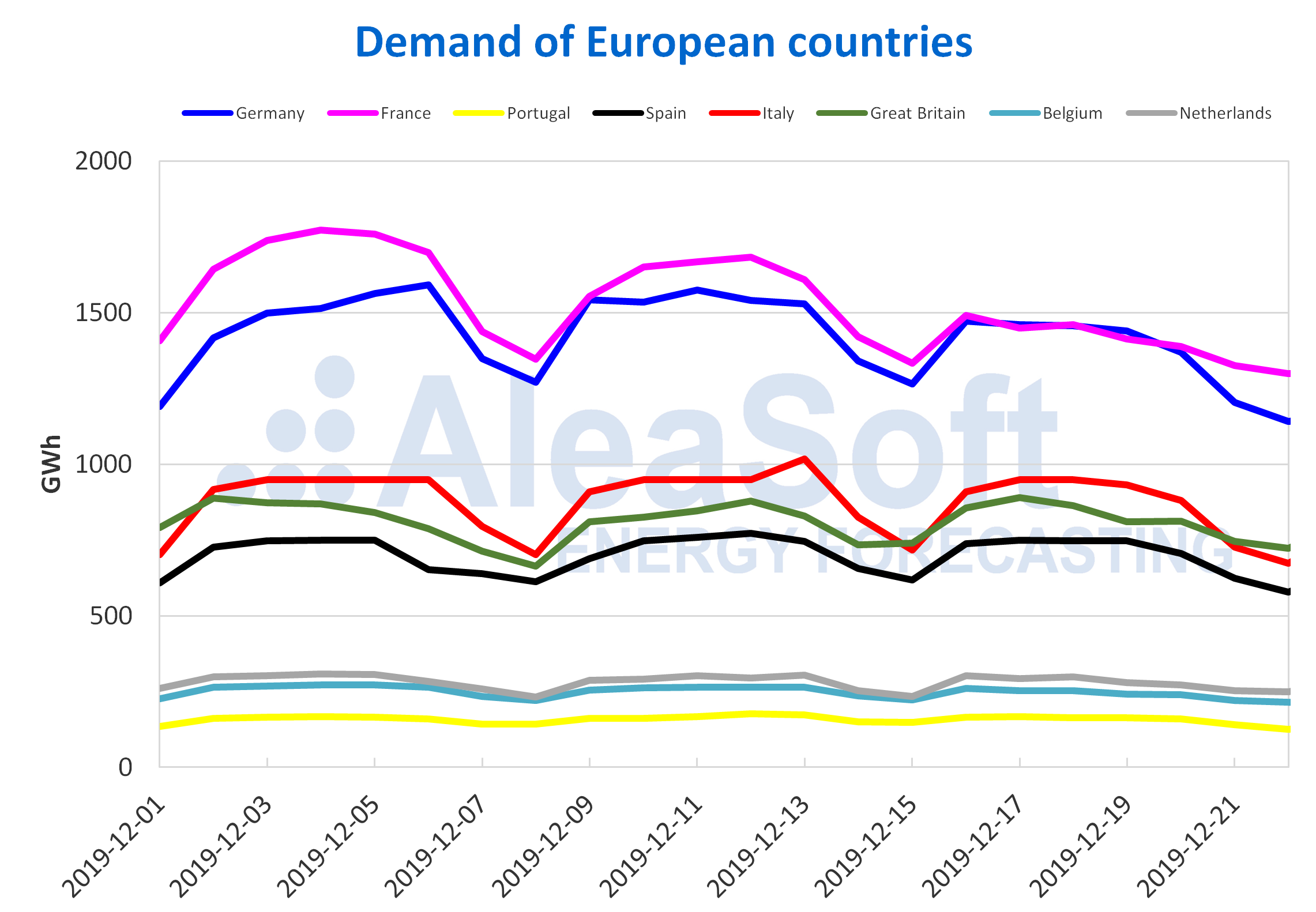 Last week, of December 16, the prices of most European electricity markets fell, mainly due to the decrease in electricity demand, thanks to the rise in temperatures. During the first days of the week, the markets were quite aligned, with average daily prices around €40/MWh, except in the IPEX market of Italy that had values closer to €50/MWh and in the N2EX market of Great Britain, whose prices were above that value.

The biggest decrease occurred in the MIBEL market of Portugal and Spain, where the increase in demand was coupled with the increase in wind energy production. The average price of the Portuguese pole was €23.30/MWh and that of the Spanish pole was €23.78/MWh, which represented a variation of 35% and 34% respectively. Between December 18 and 23 the Portuguese market was the one with the lowest price in Europe. Last week, mainly during the weekend, there were several records in the Iberian market. The hours between 3 and 10 on Sunday, December 22, with a value of €0.01/MWh, had the lowest price of the year in the Portuguese market. Since February 14, 2016, when hours 9 and 10 had a zero price, such a low value had not been reached. In the case of Spain, that same day, the hours from 4 to 6 closed at €0.10/MWh, which was the lowest hourly value of the year until hour 5 of December 24 was positioned at €0.03/MWh, this being the lowest value of the year so far. In the case of Spain, we must go back to March 9, 2014 to find a lower hourly value than this. The average daily price of December 22, €1.68/MWh for Portugal and €1.94/MWh for Spain, is also the lowest of the year in each market. Since March 3, 2014 there was no such low daily average price.

On the other hand, the EPEX SPOT market of Germany had the largest week-on-week price increase, of 8.1%. Although demand fell, wind energy production declined, leading to higher prices. Prices also rose in the Nord Pool market of the Nordic countries, a 1.7%, and in the N2EX market, a 5.4%. This last market was the one with the highest price on the continent last week, with an average of €48.43/MWh. This week prices are expected to fall in all markets due to the decline in electricity demand during Christmas.

The price of electricity futures for the first quarter of 2020 did not present clear trends in all European markets analysed by AleaSoft. The variations between last Friday, December 20, and the previous Friday, December 13, are between 1.2% and 5.3%. The EEX market and the ICE market of Great Britain were the ones with the greatest change between these two days. The futures for Q1-20 of Great Britain rose in both markets by 5.3% and 4.3% respectively. The rest of the markets registered absolute variations of less than 1.5% in all cases. The most notable decrease was seen in the ICE market of Belgium, of 1.2%. The market with the lowest variation was the ICE market of the Netherlands, settling on Friday, December 20, at €44.81/MWh, which presents a 0.5% difference from the previous Friday.

The prices of Brent oil futures for the month of February 2020 in the ICE market during the first four days of last week were up, with values between $65.34/bbl on Monday, December 16, and $66.54/bbl on Thursday, December 19, the maximum value of the last 3 months. However, on Friday, December 20, there was a 0.6% decrease from the previous day and the settlement price was $66.14/bbl. During the past week the price increase was influenced by the positive advances of the trade agreement between China and the United States, which generated an optimistic feeling that would remain during the next few days, supported in turn by the new cuts agreed by OPEC+ for the beginning of next year, which would help balance global supply and demand.

The prices of TTF gas futures in the ICE market for the month of January 2020 started the week of December 16 with a rise trend and the following days remained with an increase between €0.60/MW and €0.10/MWh, reaching €15.01/MWh on Thursday, December 19. However, last Friday, December 20, there was a decrease in prices of 5.1% compared to the previous day and the settlement price was €14.24/MWh. In the coming days, the downward trend could be maintained due to the new gas transit agreement signed last Thursday between Russia and Ukraine, which served to calm concerns about the future shortage of offers.

The prices of API 2 coal futures in the ICE market for the month of January 2020 continued the downward trend that began on Thursday, December 12, despite settling at $54.85/t on Tuesday, December 17, with an increase of 0.5% over the previous day. Subsequently, the declines continued until reach a record low of the last 3 years last Friday, December 20, with a settlement price of $53.50/t. The decline in the price of coal was influenced by low gas prices, a trend that should continue during this week.

The prices of the CO2 emission rights futures in the EEX market for the December 2020 reference contract, on Monday, December 16, started upward at €25.01/t, after increasing 3.4% compared to Friday, December 13. This trend remained throughout the past week until Thursday, December 19, when it settled at €26.85/t, the highest value since the price of September 16, of €27.27/t. After four consecutive days of increases, the price of Friday, December 20, fell by 0.7% compared to the previous day, settling at €26.67/t. Prices are expected to stabilise over the next few weeks, although they may fall due to the deadlines set by the Brexit for Britain’s departure from the European Union. 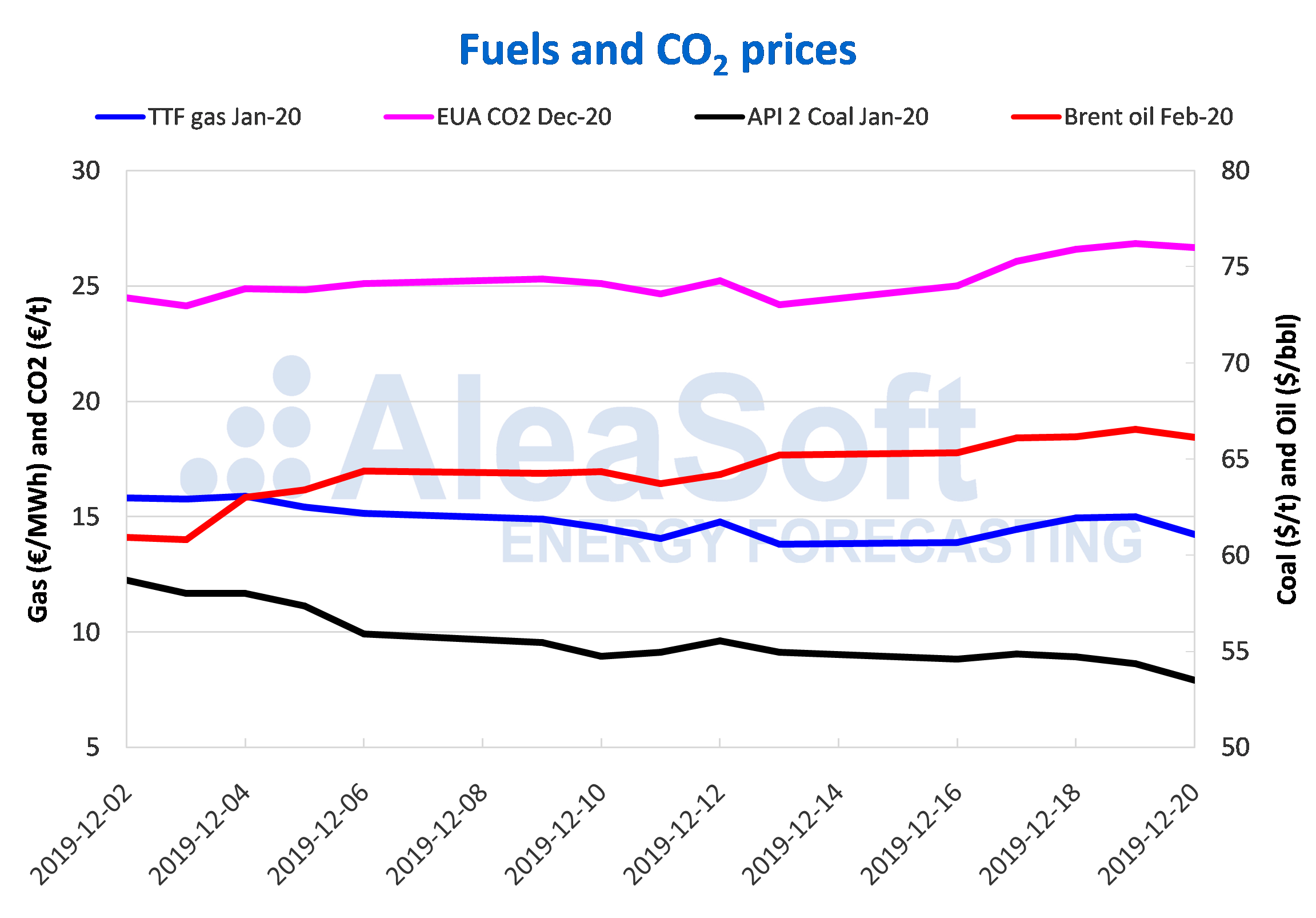