AleaSoft, May 25, 2020. From Friday, May 22, to Sunday, May 24, negative prices were registered in some hours of the EPEX SPOT markets, the N2EX market and the Danish market, belonging to the Nord Pool. The wind energy production, which recovered after a week with low values, the solar energy production that increased in all markets and the lower electricity demand over the weekend led to these prices. The TTF gas prices continued to set lows during the third week of May.

The solar energy production during the past week, which started on Monday, May 18, was higher in all the European markets analysed at AleaSoft compared to the previous week. In the Spanish market the increase was more than double, while in Portugal it increased by 47%. In the French market, the production also increased considerably and ended the week being 39% higher than the previous week. In Italy and Germany the increase was 16% and 3.6% respectively.

During the elapsed days of the month of May until Sunday 24, the production with this technology was higher than that registered in the same period of 2019. In this year‑on‑year analysis, the productions of the Iberian Peninsula also stand out with an increase in production of 34%. In the rest of the countries it increased between 27% and 14%.

For this week the AleaSoft‘s solar energy production forecasting indicates that the productions in Germany and Italy will be higher than those of the week that just ended. On the contrary, a decrease in production with this technology is expected in the Spanish market. 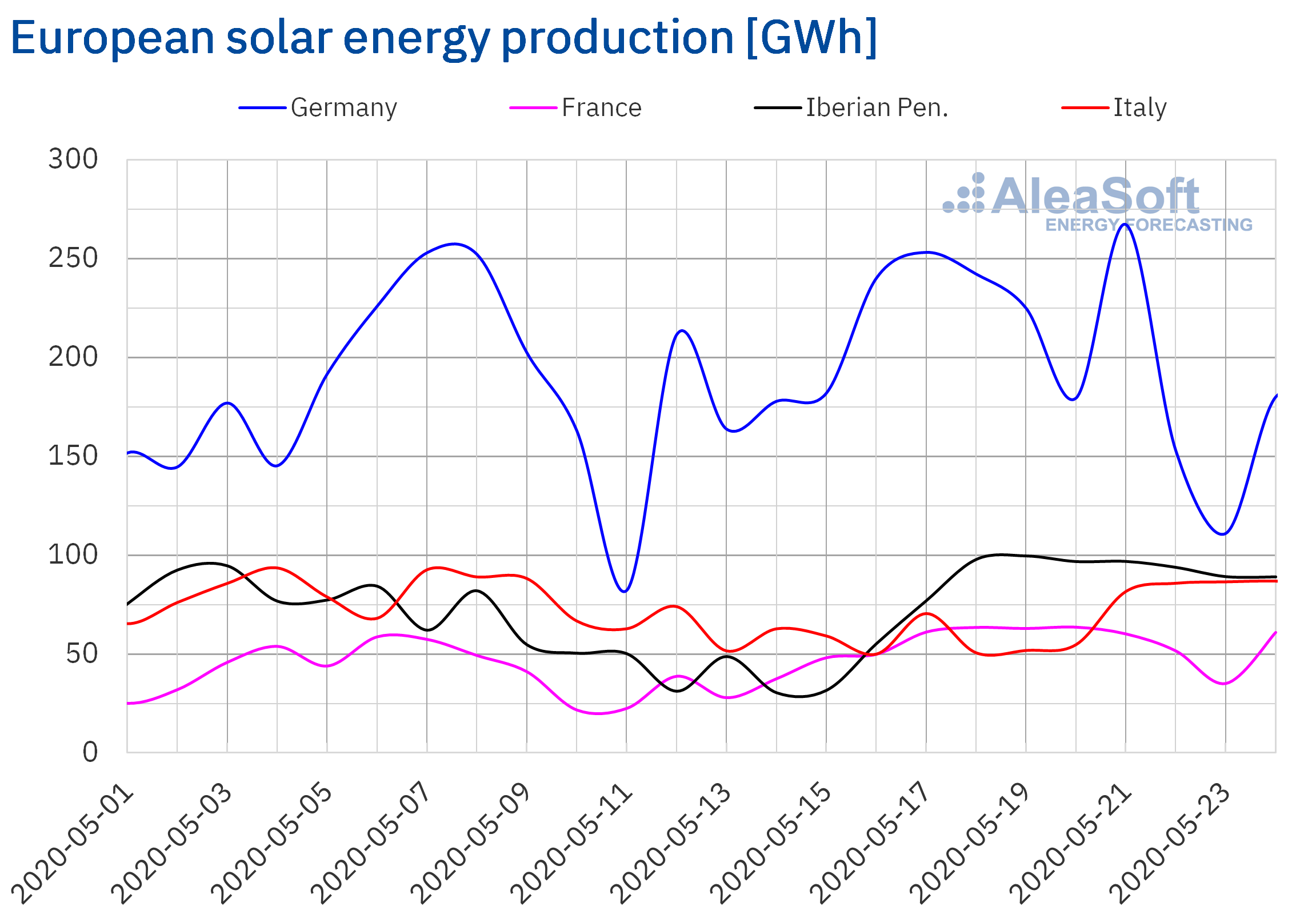 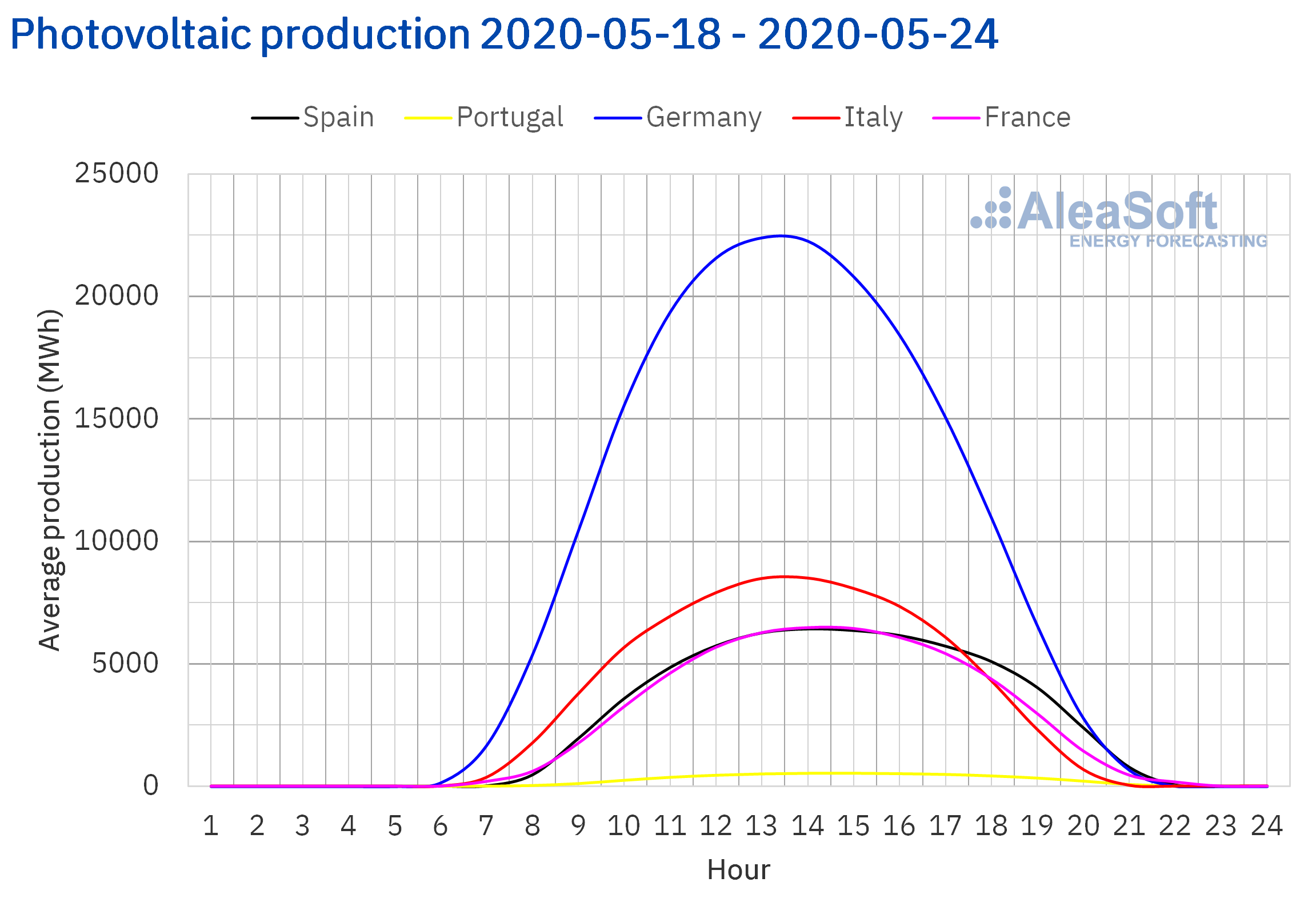 In the year‑on‑year analysis, during the 24 days elapsed in May, the wind energy production was lower in the Iberian Peninsula and Germany, 20% and 7.2% respectively. On the contrary, in the Italian and French markets it increased by 14% and 10%. 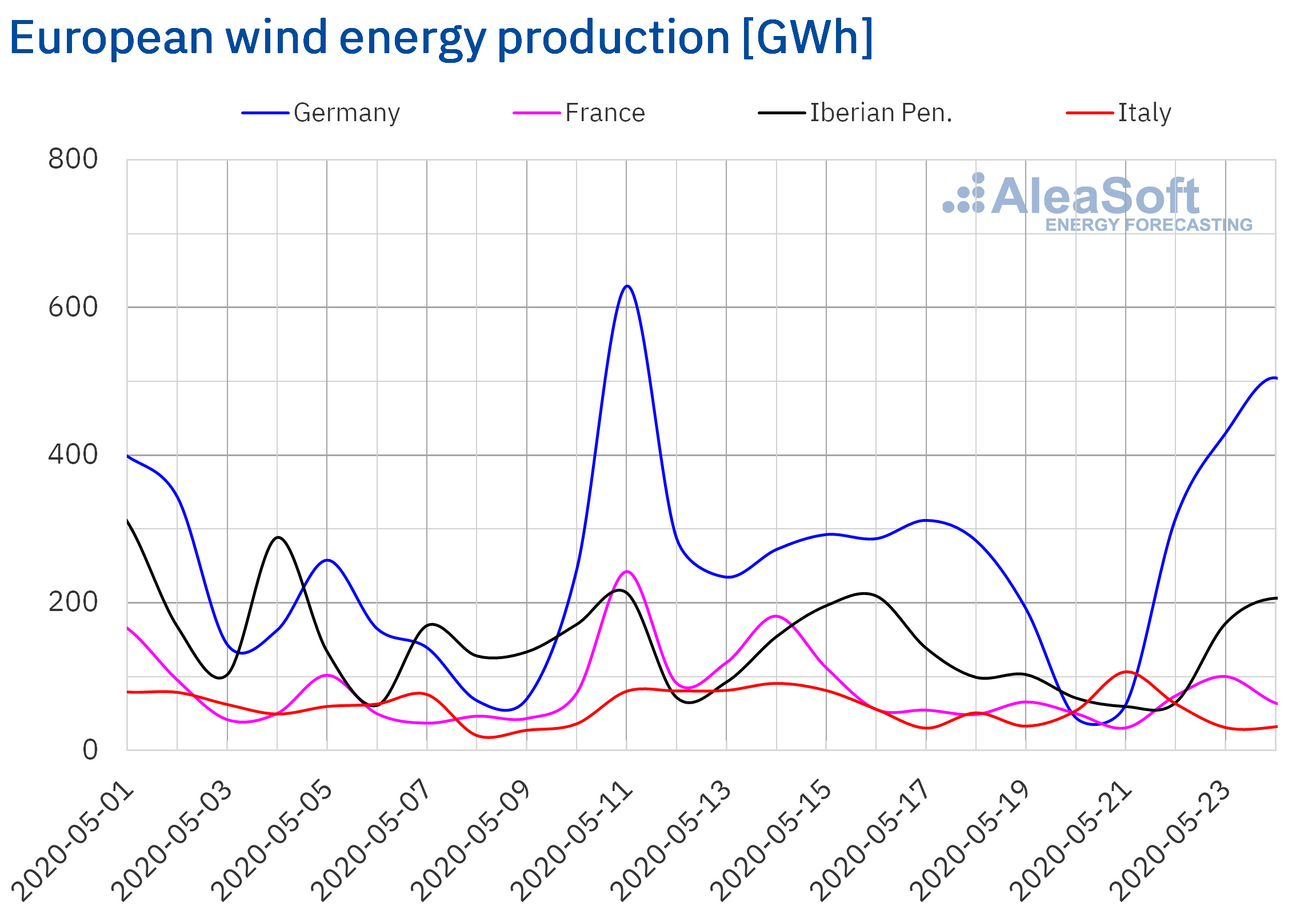 The electricity demand declined in most European markets during the past week from that of the week of May 18 due to rising temperatures across the European continent. In the case of Germany, France, Belgium and the Netherlands, the effect of the national holiday on Thursday, May 21, Ascension Day, was added. The declines in demand for these markets were between 3.8% and 8.4%.

In Great Britain there was a variation in demand of ‑8.1% and an increase in average temperatures of 6.2 °C.

In the case of Portugal, Spain and Italy there were increases in demand caused by the de‑escalation measures that were adopted since some weeks ago. 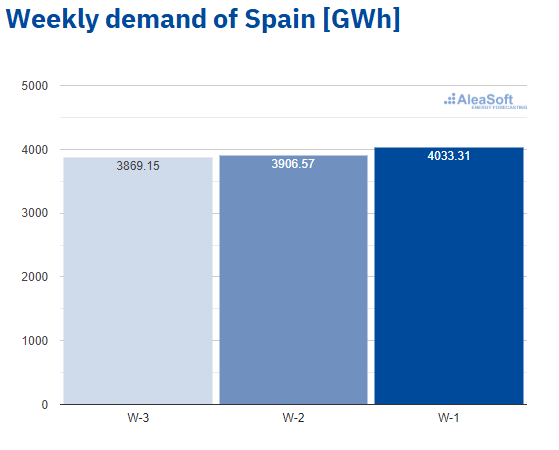 At the AleaSoft’s observatories it is possible to analyse the evolution of the demand in recent weeks with daily updated data.

The AleaSoft’s electricity demand forecasting indicates that in the coming days the demand will continue to recover as progress is made in the de‑escalation of the confinement in the different countries. 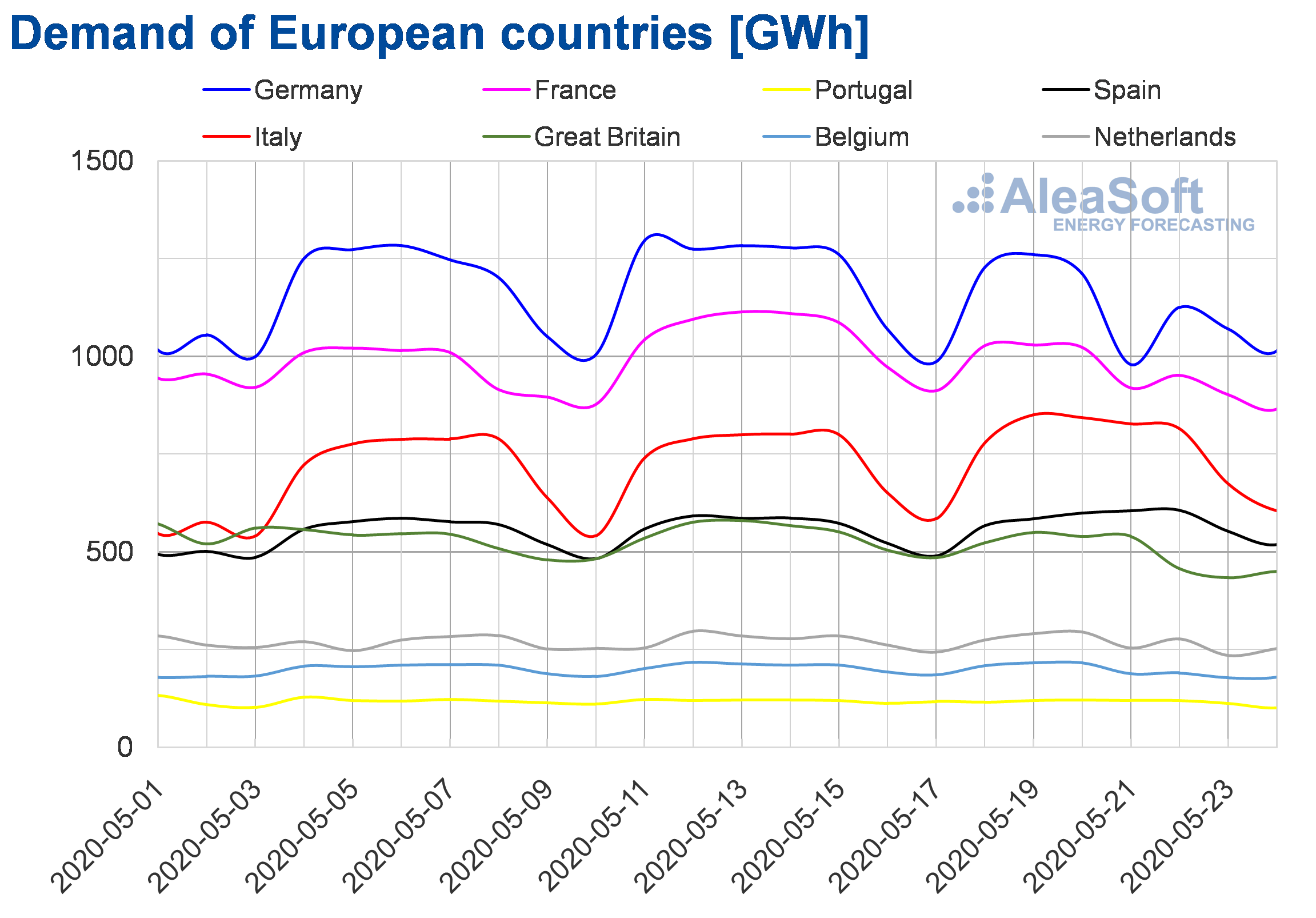 During the week of May 18, the prices decreased compared to those of the previous week in most of the analysed European electricity markets. The exception was the MIBEL market of Spain and Portugal, with increases of 17% and 19% respectively. The market with the greatest decrease in prices, of 44%, was the N2EX market of Great Britain, followed by the EPEX SPOT market of Belgium and Germany with decreases of 34% and 28% respectively. While the IPEX market of Italy, with a variation of ‑7.3%, was the one with the smallest drop.

On Saturday, May 23, there were negative hourly prices in the markets of Germany, Belgium, Great Britain, Denmark, the Netherlands and Switzerland. The market with the highest number of hours with negative prices, with a total of 17 hours, was the British market, which was also the only one of the analysed electricity markets that averaged a negative daily price, of ‑€11.31/MWh. This is the first time that a negative daily price is reached in this market since January 1, 2010.

Last Sunday, most European markets had negative hourly prices. As a consequence, the markets of Germany, Austria, Belgium, Denmark, France and Switzerland reached negative daily average prices. The lowest daily average price was that of the German market, of ‑€26.13/MWh, which was the lowest registered in this market since June 2019. 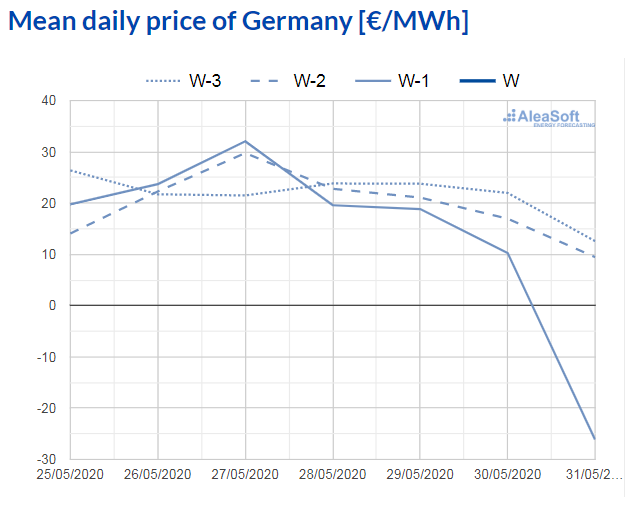 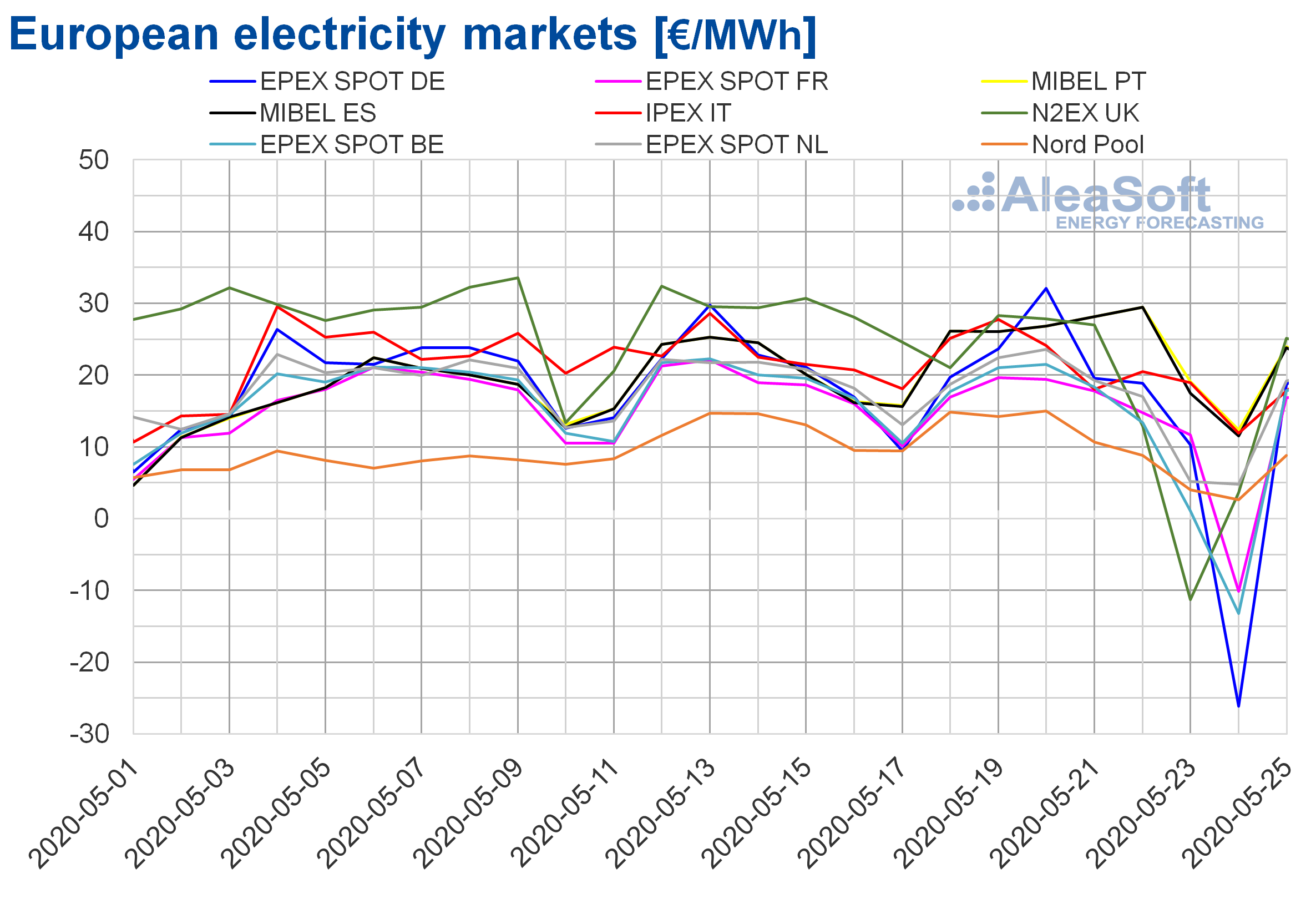 The electricity futures prices for the third quarter of 2020 declined during the last week of May 18. The NASDAQ market of the Nordic countries and the ICE market of the same region were the markets that registered the greatest percentage variation, due to their low prices. The EEX market of Great Britain was the one that registered the lowest price variation between the settlements of the weeks, with a decrease of 1.0%.

The settlement prices of the Brent oil futures for the month of July 2020 in the ICE market the week of May 18 remained above $34/bbl, being higher than those of the same days of the previous week. The highest price increase, of 22%, was that registered on Wednesday, May 20. While the maximum settlement price of the week was that of Thursday, May 21, of $36.06/bbl. This price is the highest since the $36.77/bbl registered on Friday, March 13.

The decrease in production since the beginning of the month and the progressive recovery in demand, especially in China, allowed the recovery of the prices during the past week. The oil reserves of the United States also declined. But the hostilities between China and the United States may endanger the trade agreements between these countries, affecting the recovery of the global economy.

The TTF gas futures prices in the ICE market for the month of June 2020, during the week that recently ended, remained below €5/MWh. After a 14% decrease compared to the previous day, on Thursday, May 21, the minimum settlement price of the week, of €3.82/MWh, was reached. This price was 27% lower than that of the same day of the previous week and the lowest in the last two years. On Friday, the price recovered 1.7% until reaching a value of €3.89/MWh and in the session of this Monday, May 25, the prices were above €4/MWh.

Regarding the TTF gas prices in the spot market, last week they fell from €4.87/MWh of Monday, May 18, to €2.76/MWh of last weekend, which is the lowest index price since October 2008.

Regarding the CO2 emission rights futures prices in the EEX market for the reference contract of December 2020, the week of May 18, they were higher than those of the same days of the previous week. The highest price increase was that of Wednesday, May 20, of 14% compared to the previous Wednesday. But the maximum settlement price of the week was that of Friday, May 22, of €21.40/t. This price was 12% higher than that of the previous Friday and the highest since the €21.70/t of Friday, April 17. 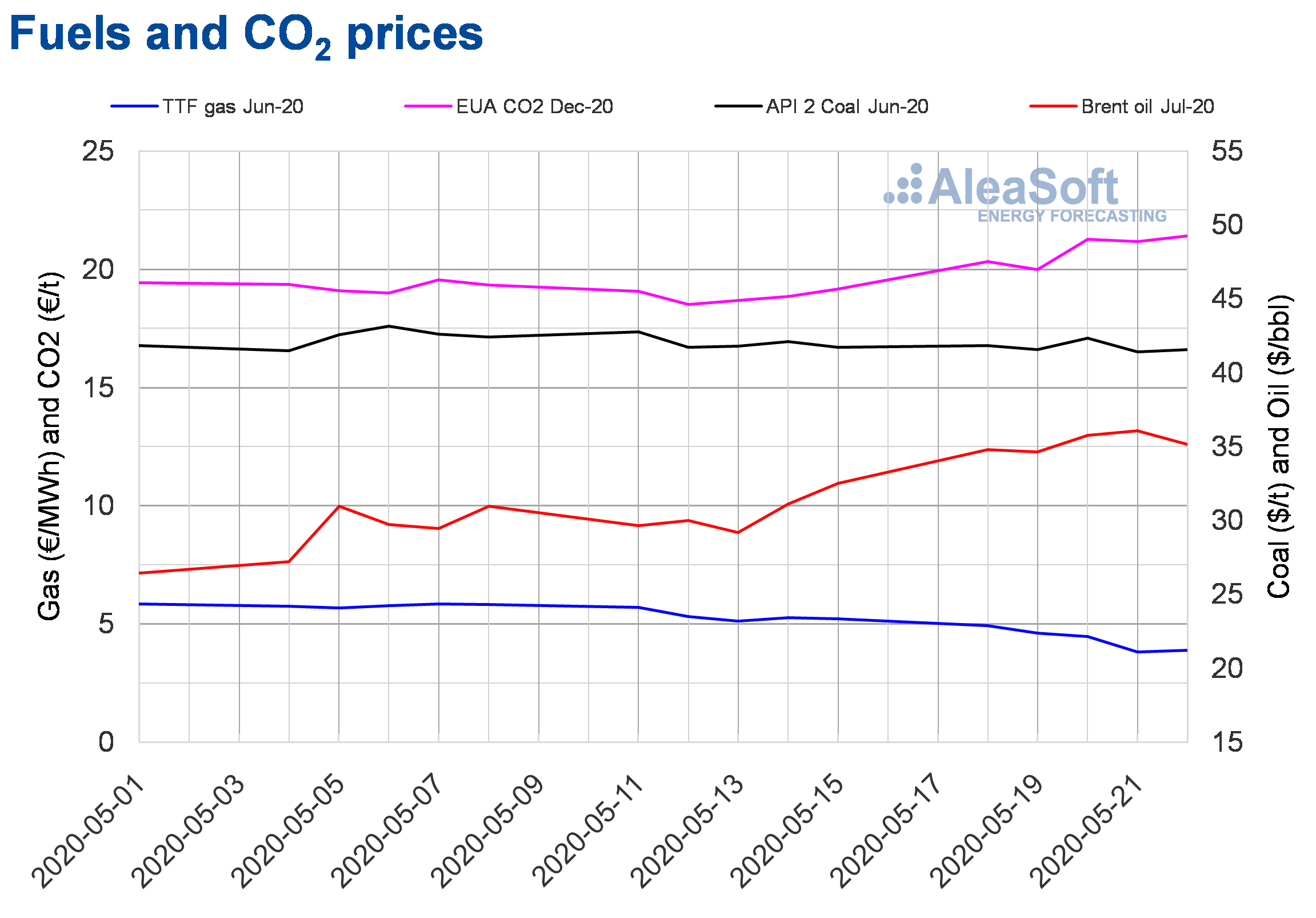 The spot market prices for TTF gas were recently included at the AleaSoft website’s energy markets observatory. The prices of the Brent oil and the CO2 emission rights will also be included shortly. In addition, the observatory of the electricity market of Romania was enabled, with demand and price data. The observatory is a tool that allows analysing the evolution of the main market variables in recent weeks, with comparative hourly, daily and weekly charts.

PrevAnteriorRecovery of the European electricity markets prices due to the fall in wind energy production, but they continue below €30/MWh
SiguienteOptimistic message from the experts on the financing of renewable energy projects during this crisisNext
Menu
Facebook-f Twitter Linkedin Instagram