AleaSoft, May 23, 2019. The electricity market MIBEL led the European markets price ranking during the first four days of this week, with daily average values in a range between 50 €/MWh and 60 €/MWh. According to AleaSoft, the main cause of this situation is the fall in renewable energy production, which is accentuated in the current scenario in which there are two nuclear power plants stopped for refuelling.

The MIBEL electricity market price of Spain and Portugal was the highest in Europe this week, with an average value of 56.17 €/MWh between May 20 and 23, which represents an increase of 9.7% compared to the first four days of last week. Since the beginning of this week, every day the Iberian market daily average price was the highest in Europe, a situation that also occurred on Sunday, May 19. According to the analysis carried out by AleaSoft, the main cause of the rise in prices is the drop of the Iberian wind energy production in the first three days of this week, of 65% compared to the average values of last week. Moreover, this week solar energy production in Spain, which includes photovoltaic and solar thermal, dropped by 2.8% compared to the average of last week, which together with the fact that there are currently two nuclear power plants stopped for refuelling, Ascó II and Trillo, favoured that the production with combined cycles and with coal in Spain increased by 29% and 87% respectively, if we compare the average of the first three days of this week with that of the homogeneous days of last week.

Another interesting aspect in the MIBEL market, caused by the drop in wind energy production this week, is that since Tuesday, May 21, the price valley has disappeared. Between May 21 and 23 the daily price range, meaning the difference between the maximum and minimum daily prices, decreased by 62% compared to the homogeneous days of last week.

In most of the analysed European electricity markets, the prices rose so far this week compared to those of the first four days of last week, although the increases, which are between 4% and 6% for EPEX SPOT markets of Germany, France, Belgium and the Netherlands, are not as high as for MIBEL. In the case of the N2EX market of the UK, Nord Pool market of the Nordic countries and IPEX market of Italy, during the analysed period prices fell by 2.5%, 5.2% and 11% respectively.

As mentioned before, the group of markets with the highest prices this week is led by the Iberian MIBEL market, with daily average values between 50 €/MWh and 60 €/MWh. This group also includes the IPEX market, with prices around 50 €/MWh this week, and the N2EX market with values in a range between 45 €/MWh and 50 €/MWh.

In the group with the lowest market prices is the Nord Pool market, with prices around 40 €/MWh this week, are the EPEX SPOT markets of Germany, France, Belgium and the Netherlands, which started the week a bit above 45 €/MWh but in the last two days analysed returned to the path around 40 €/MWh. 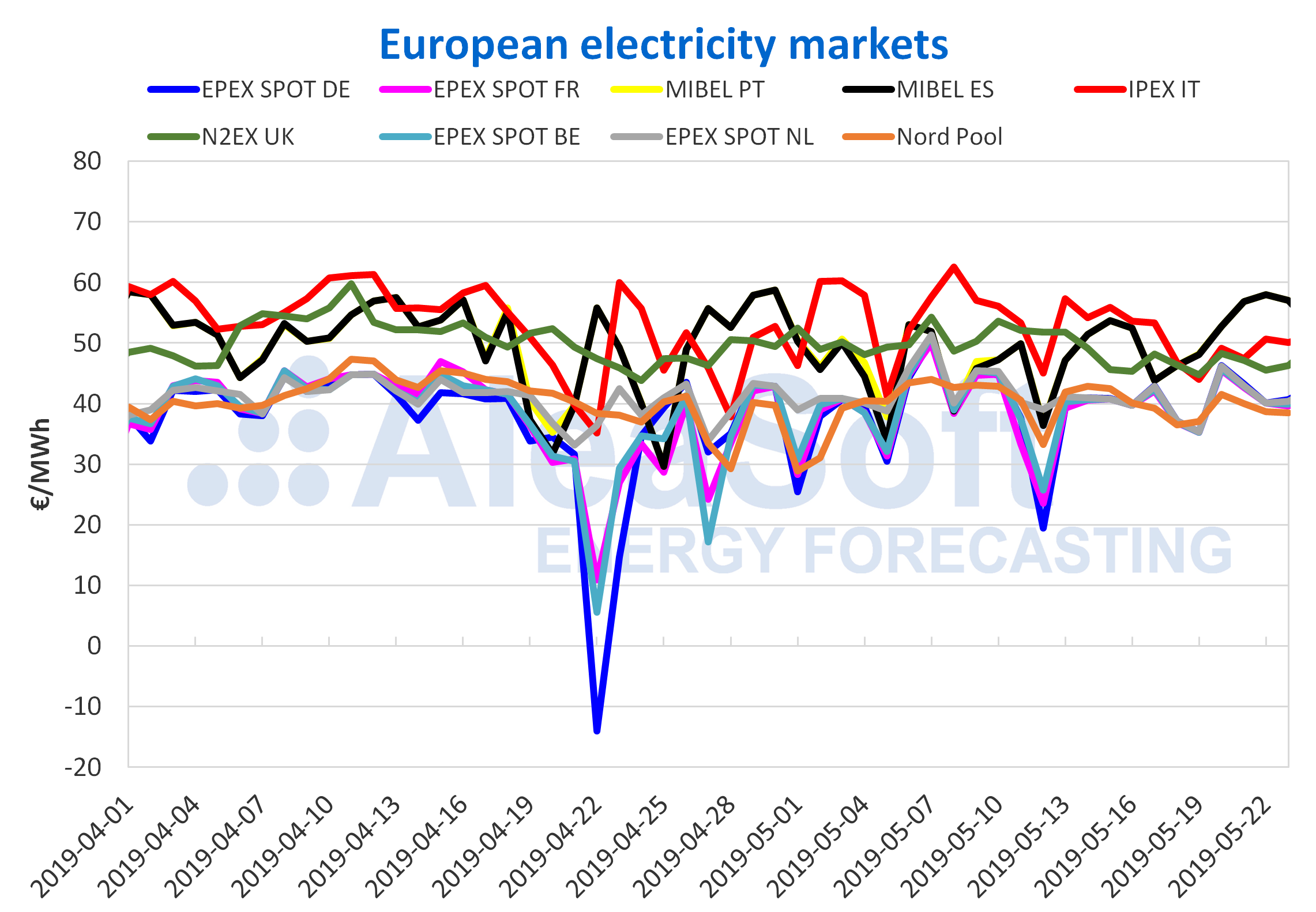 The Brent oil futures price for the month of July 2019 in the ICE market remained on Monday and Tuesday of this week around 72 $/bbl and settled this Wednesday, May 22, at 70.99 $/bbl, decreasing almost 1 $/bbl with respect to the previous day and positioning itself as the lowest value in a week. This decrease came after a report by the US Energy Information Administration informing an increase in the crude inventories in the United States last week. Another factor that presses downward is the trade dispute between the United States and China. On the other hand, this market continues to be pressured by the strong geopolitical tensions, together with the cuts in the production of the OPEC countries, which Saudi Arabia advocates to maintain in the second half of the year.

Futures of TTF gas for June in the ICE market continue with a downward trend since April 9 and settled on Wednesday, May 22, at 12.65 €/MWh.

API 2 coal futures for June 2019 in the ICE market continue settling at historical lows, positioning itself on Monday and Wednesday of this week of May 20 below 58 $/t.

The prices of CO2 emission rights futures in the EEX market for the reference contract of December 2019 continue to fluctuate in the range between 24.70 €/t and 27.54 €/t, settling on Wednesday, May 22, at 26.37 €/t. Prices are in this band from April 11, after it was confirmed that the Brexit was postponed until October of this year as mentioned before in AleaSoft.

Spain’s electricity futures in the OMIP and EEX markets, as well as those of Portugal in the OMIP market, for the third quarter of 2019 fell this week from 54 €/MWh, maintaining the downward trend they are experiencing since May 10, mainly the electricity futures of Spain that settled this Wednesday, May 22, around 53.40 €/MWh.

The France and Germany futures in the EEX market for the next quarter settled yesterday, May 22, at 42.43 €/MWh and 41.70 €/MWh, which represents an increase close to 1 €/MWh compared to the previous day, after falling on Monday and Tuesday compared to last week. Similarly, the futures for next year of these two countries during the first two days of the week had a decreasing trend, but in the session on Wednesday they rose, above 52 €/MWh in the case of France and 48 €/MWh in the case of Germany.

From May 20 to 22, wind energy production in Spain fell back just like in the previous week. This time it had a decrease of 65% compared to the average values of last week. However, it is expected to be significantly restored by next week.

So far this week, the solar energy production of Spain, that includes the photovoltaic and the solar thermal, decreased by 2.8% regarding the daily average values of the previous week. According to the AleaSoft analysis, production is expected to slightly recover next week until reaching levels similar to those of last week.

The Nuclear energy production has maintained values similar to those of last week, due to the fact that there were no changes in the state of operation of the Spanish plants. The Ascó II and Trillo nuclear power plants continue in programmed shutdown for refuelling, as mentioned in AleaSoft on previous occasions. The expected date for the resumption of the operation of these power plants is May 31 for Ascó II and June 9 for Trillo.

From Monday to Wednesday of this week hydroelectric energy production surpassed by 6.3% the average values of May 13 to 15. 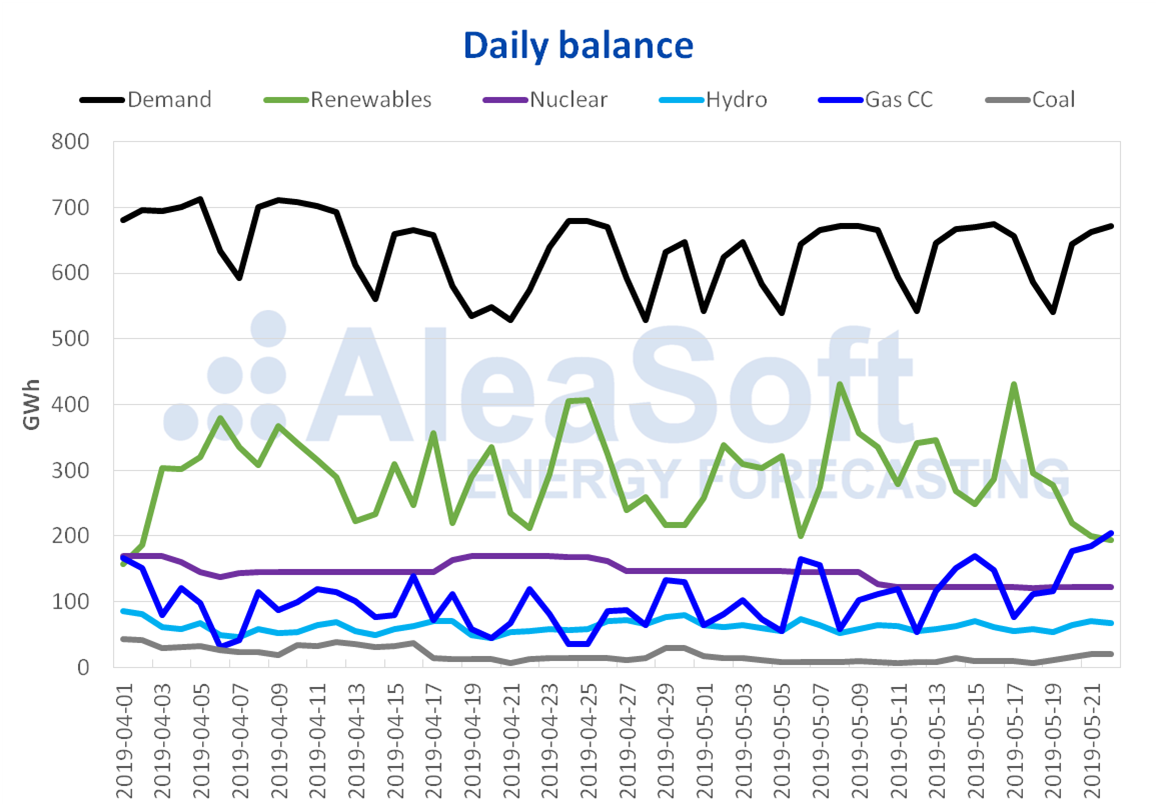 The growing behaviour of the hydroelectric reserves that began in the second week of April was maintained in the last week, with an increase of 92 GWh compared to the previous week. Current capacity is 12 424 GWh, which represents 53% of total capacity and 80% of what was available a year ago, according to the latest Hydrological Bulletin of the Ministry for Ecological Transition.