AleaSoft Energy Forecasting, October 11, 2022. In the first week of October, prices fell in almost all European electricity markets compared to the previous week. The drop in gas prices and demand supported these declines. The largest decline, 59%, was in the Nordic market where a weekly average of €59.98/MWh was registred. However, in the MIBEL market of Spain and Portugal, prices rose by 29%, influenced by the decline in wind and solar energy production and the recovery of the demand in Spain.

In the week of October 3, prices in almost all European electricity markets analysed at AleaSoft Energy Forecasting decreased from the previous week. The exception was the MIBEL market of Spain and Portugal, where prices rose by 29%. On the other hand, the largest price decline was in the Nordic Nord Pool market, down 59%, while the smallest was in the Italy’s IPEX market, down 14%. In the remaining markets, price declines ranged from 20% in the EPEX SPOT market of France to 40% in the EPEX SPOT market of Germany. Although MIBEL market prices were among the lowest due to the application of the gas price cap in this market, a portion of consumers paid a higher price as compensation for this limitation on gas prices. In the week of October 3, the average of this price went up to €231.82/MWh in the Spanish market, a value 45% higher than the one of the previous week.

Regarding hourly prices, in the period between Monday, October 3 and Tuesday, October 11, low prices were registered in several markets. In the German market, there was one hour on October 5 with a price below €1.00/MWh and five hours on October 6. In the Nordic market, a total of fourteen hours were registered with prices below €1.00/MWh between October 5 and 7, one of which had a price equal to zero. Also in the UK N2EX market there were two hours with a price equal to zero on October 7. In the case of the Dutch market, from the eight hours with prices below €1.00/MWh registered on Thursday, October 6, four of them had a price equal to zero and two of them had negative prices. In the Belgian market there were also three hours with negative prices on Saturday, October 8. Precisely, the lowest hourly price of the analysed markets, €‑76.37/MWh, was registered that day between 12:00 and 13:00 in the Belgian market.

During the week of October 3, the 32% drop in the average weekly gas price compared to the previous week favoured lower prices in European electricity markets. It also contributed to this trend the drop in demand in almost all markets, in addition to the increase in solar energy production in countries such as Germany, France and Italy. In the case of Germany, wind energy production also increased, contributing to lower prices in that market. On the other hand, demand increased in the Spanish market while wind and solar energy production in the Iberian Peninsula decreased. This led to higher prices in the MIBEL market.

AleaSoft Energy Forecasting’s price forecasts indicate that in the week of October 10, prices could increase in most European electricity markets influenced by declines in wind and solar energy production, as well as a recovery of the demand in some markets. 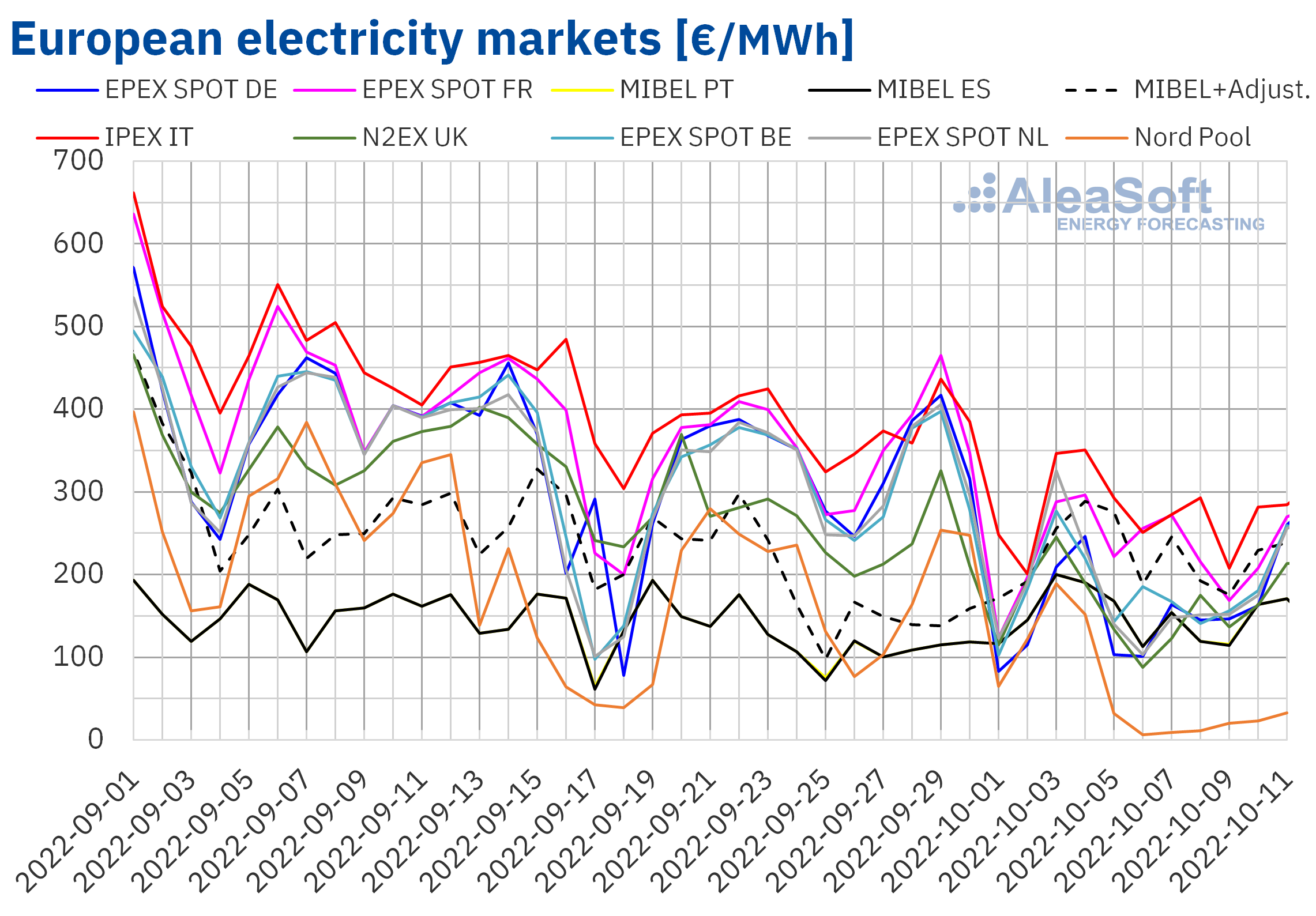 This October, AleaSoft Energy Forecasting is celebrating its 23rd anniversary as a leader in short-, mid- and long-term European energy markets forecasting. Among the mid‑term services, we include hourly electricity market prices simulations, a large amount of information that is useful as input in optimisation processes, to visualise patterns, calculate future price probabilities, among others.