The price forecasts are essential for the planning of photovoltaic projects

AleaSoft, February 7, 2020. The large deployment of photovoltaic and renewable capacity in general that is expected for the next decade puts on the table a key issue for the development and success of the photovoltaic sector, such as the projects financing. The UNEF organised a workshop at the GENERA fair to discuss this issue, where AleaSoft participated contributing its vision of the future of the electricity market and the use of the price forecasts for the long‑term planning of the photovoltaic projects.

This morning, the workshop “The Financing of the photovoltaic projects” organised by the Spanish Photovoltaic Union (UNEF, by its acronym in Spanish) took place within the framework of the Energy and Environment International Trade Fair GENERA 2020, which this year is held in Madrid with the slogan “Integrating energies for a sustainable future”. The workshop was sponsored by AleaSoft that takes the opportunity to congratulate the UNEF for organising it and all GENERA participants for the success of the fair this year. 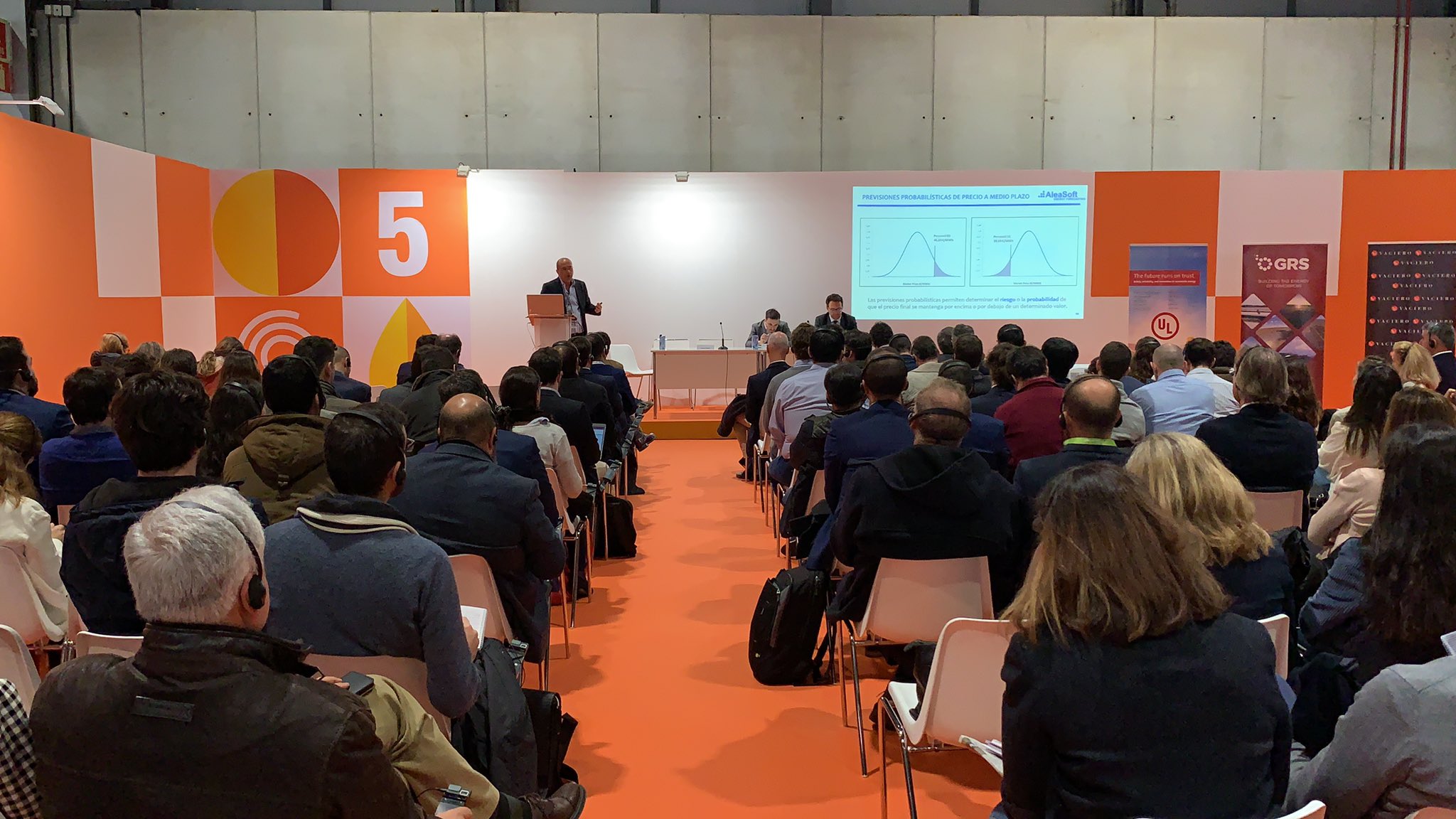 Antonio Delgado Rigal, CEO of AleaSoft, at the workshop “The Financing of the photovoltaic projects” organised by UNEF at the GENERA 2020 fair. Photo: UNEF.

In the workshop on financing of photovoltaic projects, the challenges and strategies to face the necessary financing to start up new solar photovoltaic generation plants were presented and discussed. From merchant or PPA options, to risk coverage or insurance contracting. Antonio Delgado Rigal, CEO of AleaSoft, participated in the workshop with the presentation “Electricity market prices forecasts for the calculation and optimisation of income”. In his exposition, Antonio explained AleaSoft‘s vision of the future of the electricity markets in Europe and the Iberian market in particular.

The challenges facing the European energy market, with the imminent increase in production with renewable sources to achieve the targets of reduction of CO2 emissions set out in the National Energy and Climate Plans (NECP), are great. In the latest draft of the Plan that the Spanish government sent to the European Union, it aims to reach 39 GW of solar photovoltaic capacity in 2030. That is 31 GW of photovoltaic capacity to be installed in ten years, in addition to the 25 GW of wind capacity and the 5 GW of solar thermal capacity. 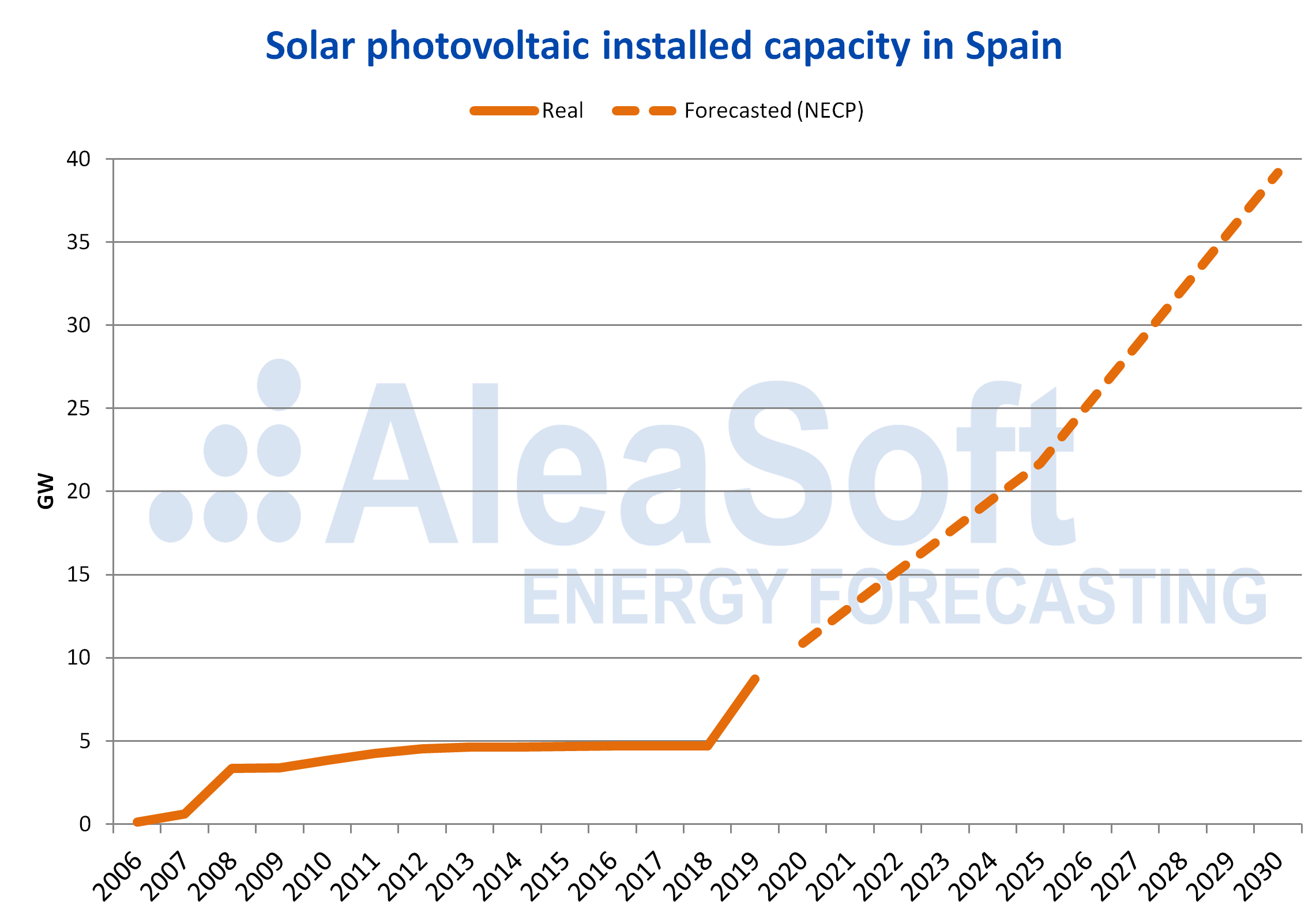 The doubts that appear when seeing these numbers are many. Will the energy system be able to absorb all the renewable energy production? Will the marginal market system with so much production with such low opportunity costs be functional? Will we have the majority of the year zero prices in the market? For AleaSoft, the market has so far been able to self‑regulate and to adapt to all changes (changes in the production mix, regulatory changes, tax changes, etc.) and will continue to adapt with the increase in renewable energy production.

According to AleaSoft, the key is in the response that the electricity demand will have in the face of this increase in renewable energy. The decarbonisation targets of the entire economy will force the massive electrification of the industrial, transport and air conditioning sectors. This will be the increase in demand necessary to maintain the market balance.

On the other hand, in those sectors where electrification is not efficient (industrial heat, heavy and long distance transport, etc.), the transition to fuels with zero polluting emissions must be made, and in that area, according to AleaSoft, the hydrogen It will be the maximum representative. This hydrogen will have to be produced from renewable sources so that its complete cycle is entirely without emissions, so that its production will contribute to the increase in demand for green electricity.

This vision of the future of the market and the price forecasts are essential for the decision making in the medium and long term, from the planning of a photovoltaic project to the design and execution of a strategy for the risk management of market prices.