AleaSoft, July 15, 2019. During the past week, around July 11, price peaks were registered in several electricity markets in Europe. Electricity, gas, coal, oil and CO2 emission rights markets all experienced price increases, coinciding with an upward trend, with temperature peaks and with news that favoured an increase in market activity.

The Brent oil futures prices for the month of September in the ICE market settled this Friday, July 12, at 66.72 $/bbl. The market remained between 66 $/bbl and 67 $/bbl after settling on Wednesday, July 10, at 67.01 $/bbl, with an increase of 4.4% compared to the previous day, being the highest settlement price since the end of May.

The TTF gas futures in the ICE market for the month of August continued to rise during the past week, settling on Friday, July 12, at 13.28 €/MWh, almost 12% above the settlement price of Monday, July 8, that was 11.88 €/MWh. This price trend was mainly conditioned by the increase in the prices of CO2 emission rights futures market.

The CO2 emission rights futures prices in the EEX market for the reference contract of December 2019 settled this Friday at 28.79 €/t, after starting to be traded upwards from Wednesday, July 10, when settled at 28.20 €/t, after being oscillating between 26 €/t and 27 €/t in the period from June 24 to July 9. The price reached on Friday, July 12, represents an 11% increase compared to the lowest price reached in the first week of July, corresponding to July 4, with a settlement price of 26.02 €/t. 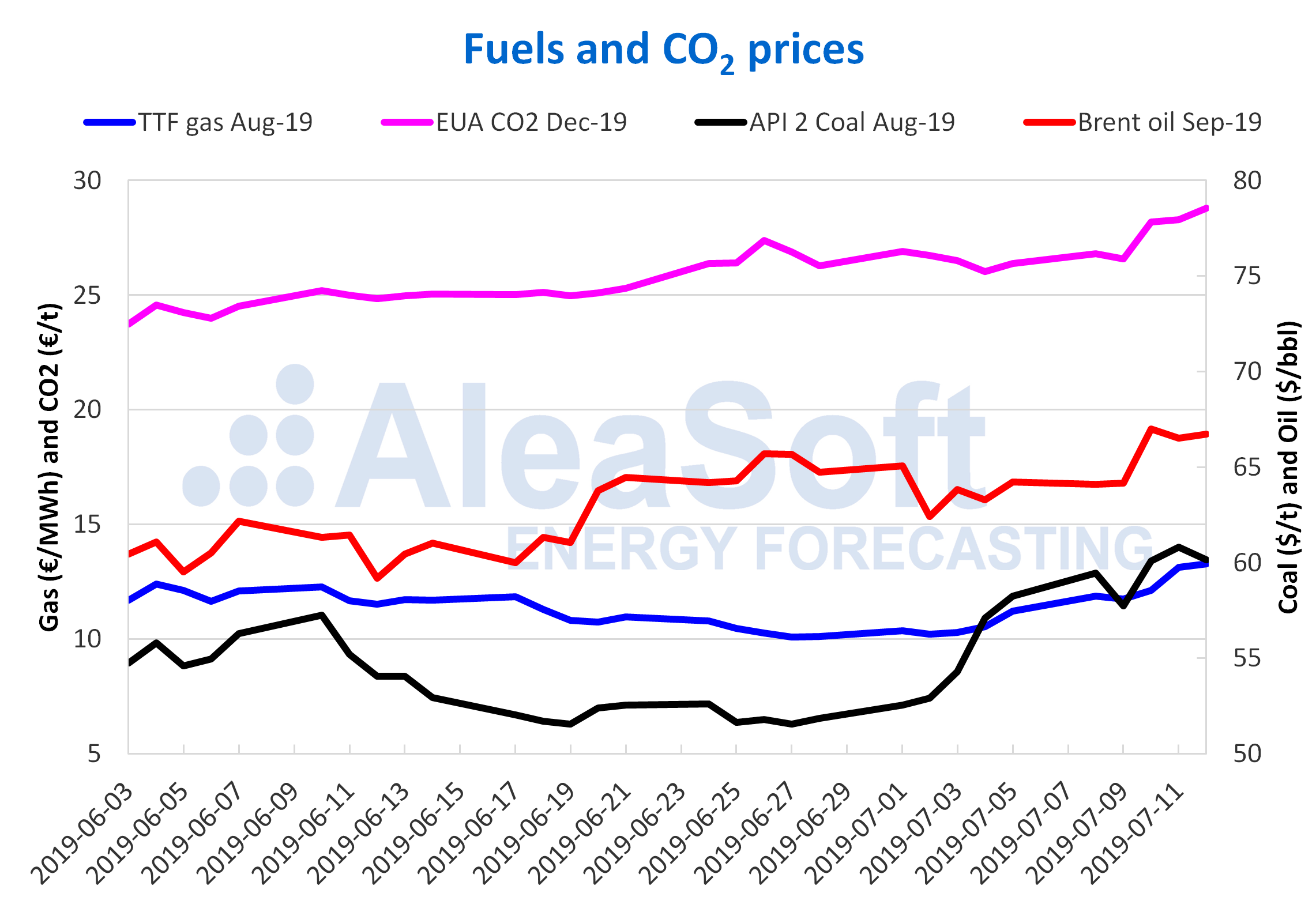 Last week, from July 8 to 14, was characterised by a short but intense upward race in EPEX SPOT electricity markets prices: Germany, France, Belgium and the Netherlands. The week began with the price around 35 €/MWh and marked its peak on Thursday, July 11, around 45 €/MWh, a rise of 28% in three days. The price peak on Thursday coincided with the peak temperature in France, Belgium and the Netherlands, and also with minimums in wind and solar energy production in the EPEX SPOT markets. On Thursday, July 11, there were also significant increases in the futures of gas and coal fuels, and those of CO2 emission rights. Finally, in the global average of the week, the price increase in these markets was around 22% compared to the previous week, an increase very similar to that registered in the Nord Pool market of the Nordic countries.

The rest of the electricity markets with higher prices, the Iberian MIBEL, the British N2EX and the Italian IPEX, recorded more moderate price increases: 2.2% in Spain and Portugal and 12% in Great Britain, with the market in Italy being the only one with a drop in prices: 11% compared to the previous week.

The European electricity futures prices for the fourth quarter of 2019 ended last week with large increases in all markets. The markets of the UK, ICE and EEX, stand out, as well as the NASDAQ market of the Nordic countries that increased on Friday, July 12, more than 10% with respect to the previous Friday. At the other extreme, futures with lower growth were those of the Nordic countries in the ICE market with a growth of 2.0%. In the rest of the markets increases of between 5.0% and 9.3% were recorded.

Similarly, the European electricity futures for the year 2020 ended last week with broad increases in all markets, compared to the Friday of the previous week. For these markets the increase remained between 1.5% and 9.1%, where the UK markets stand out again in ICE and EEX, which quoted close to 9% higher.

These increases in the European electricity futures prices, both for the fourth quarter and for the year 2020, occur in parallel with the increase in the prices of gas, coal, oil and CO2 futures registered in the middle of last week.

Last week, the wind energy production fell compared to the previous week in Germany, Portugal and Spain, by 53%, 4.3% and 1.6% respectively. In France, the generation from this renewable source increased by 14%. The most notable change was the growth of 117% in Italy, compared to the week of July 1. For this week of July 15, at AleaSoft it is expected a recovery of the wind energy production in the Iberian Peninsula compared to last week and a decrease in Germany, France and Italy. 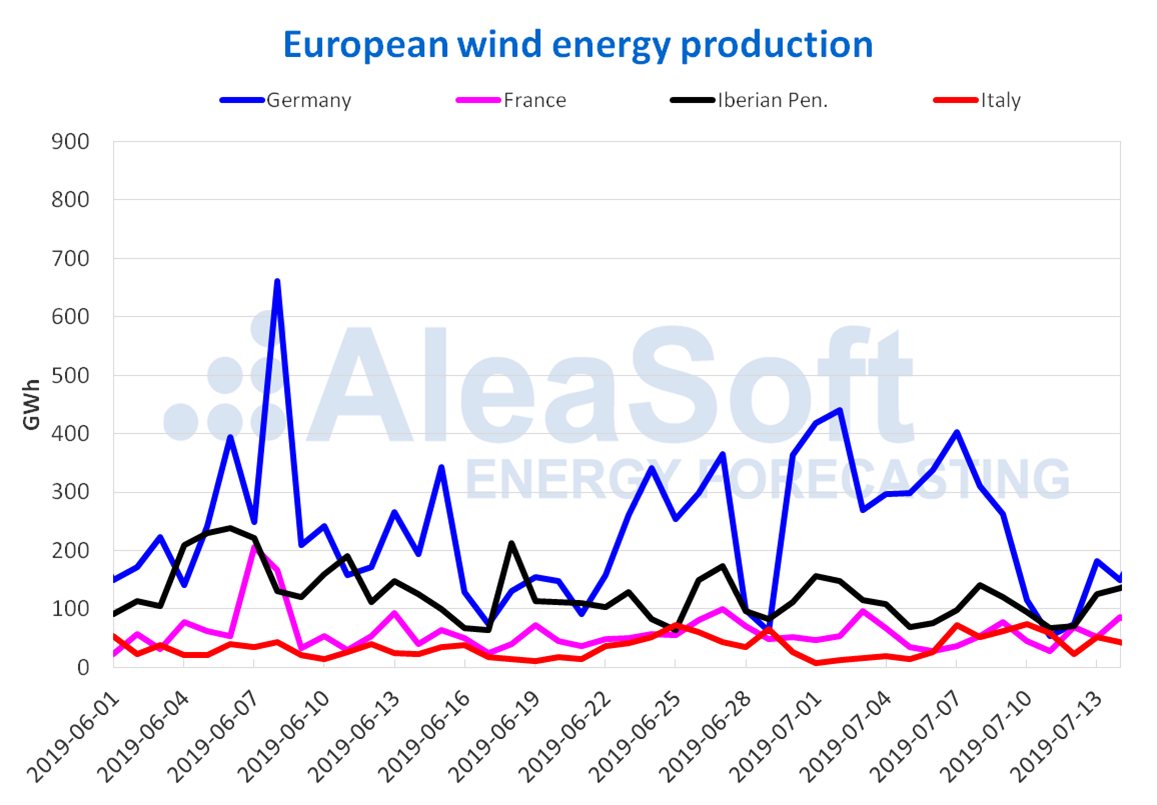 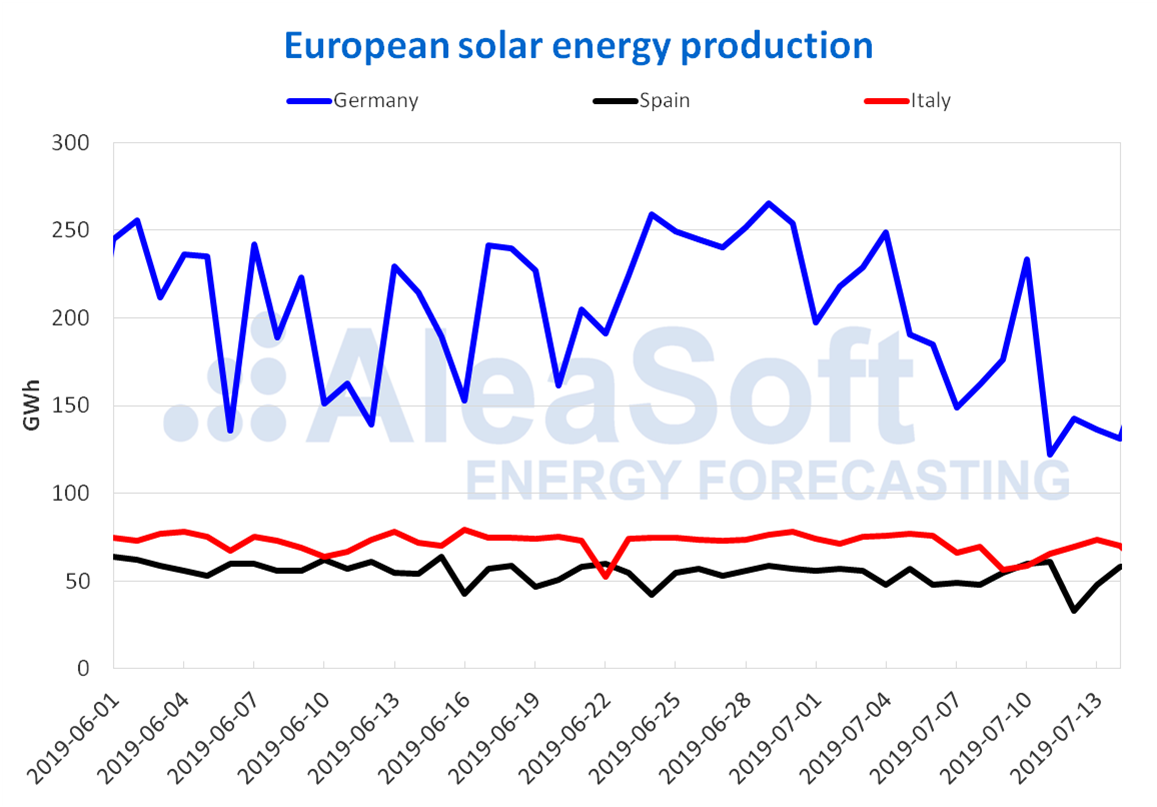 PrevAnteriorPrices rise this week in the MIBEL market, but even more in the rest of Europe
SiguienteCO2, gas and coal prices and PPA dominate the headlines on electricity markets so far in 2019Next
Menu
Facebook-f Twitter Linkedin Instagram