Prices rise this week in the MIBEL market, but even more in the rest of Europe

AleaSoft, July 11, 2019. The average price of the MIBEL market rose so far this week by 4% compared to the first four days of last week. However, this increase is low compared to those of the rest of the European markets, which reached up to 22% in the case of our neighbour, the EPEX SPOT market in France.

On last weekend, July 6 and 7, the MIBEL electricity market in Spain and Portugal had the highest average price in Europe, with 51.78 €/MWh and 49.62 €/MWh respectively. Since the beginning of this week, the prices of this market continued among the highest in Europe, something that is usually the case. Between July 8 and 10, although MIBEL was not the market with the highest price in the continent, it was very close to the one that occupied that position, the IPEX market in Italy, until today July 11 when it led again the ranking of electricity prices in Europe, with 54.00 €/MWh. In these first four days of the week, the price increased by 4% compared to the same days of last week.

However, the rise of the MIBEL market may seem insignificant compared to those of most of the European electricity markets, where the average price between July 8 and 11 rose between the 11% of the N2EX market of Great Britain and the 22% of the EPEX SPOT market of France, compared to the average price between July 1 and 4. This week the exception was the IPEX market in Italy, which in this period fell by 14%, after falling down to prices slightly above 50 €/MWh, while during the last week they were above 60 €/MWh.

The group of markets with lower prices, in which are the EPEX SPOT markets of Germany, France, Belgium and the Netherlands as well as the Nord Pool market of the Nordic countries, is the one that experienced the biggest recovery. At the beginning of this week, on July 8, their prices were around 30 €/MWh in the Nord Pool market and 35 €/MWh in the EPEX SPOT markets and today, July 11, their values are around 35 €/MWh and 45 €/MWh respectively. In the case of the group with the highest prices, this week the IPEX and MIBEL markets were over 50 €/MWh and N2EX over 45 €/MWh. 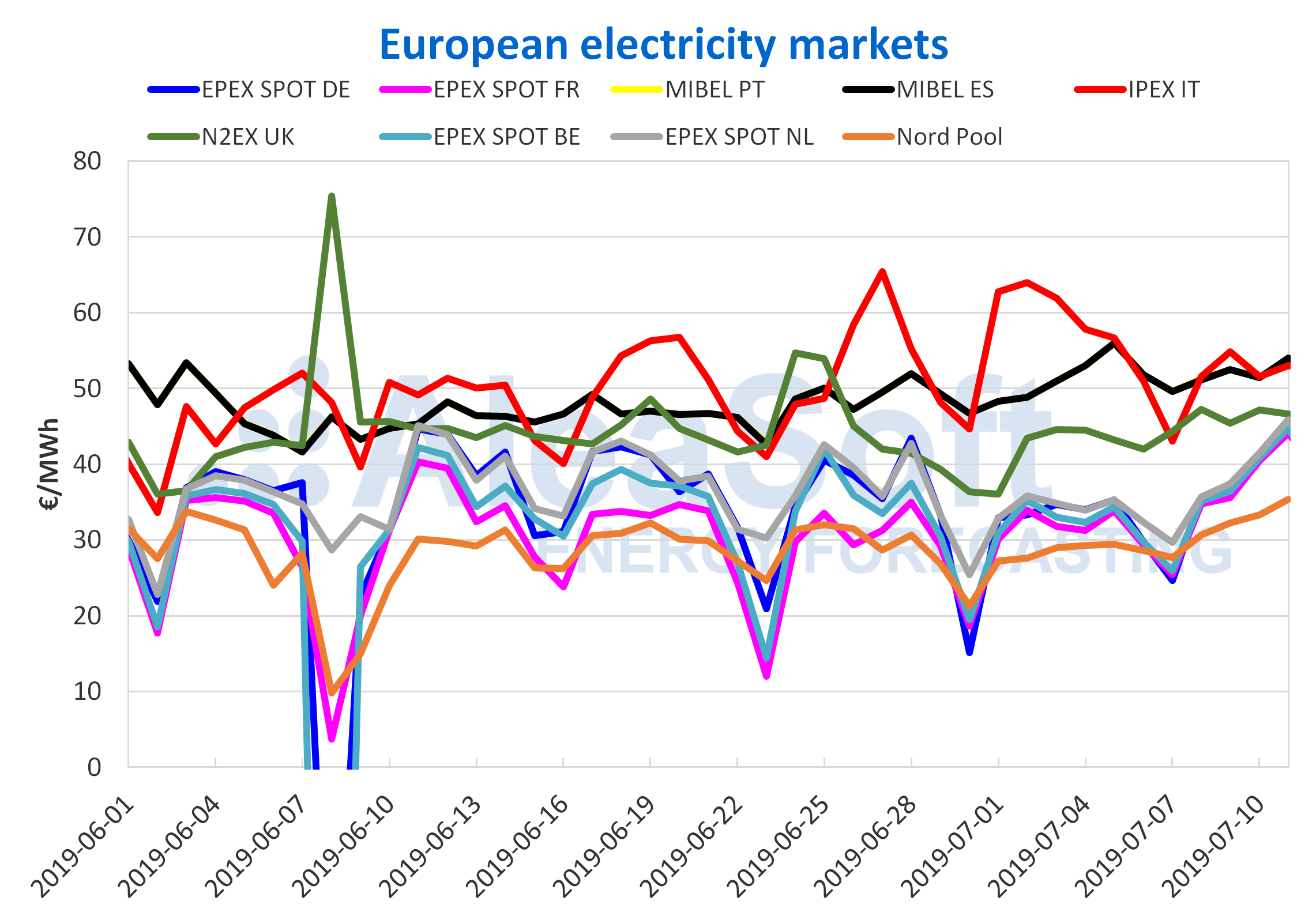 The Brent oil futures prices for the month of September in the ICE market settled this Wednesday, July 10, at 67.01 $/bbl, increasing by almost 3 $/bbl compared to the previous day, which is equivalent to a 4.4%. Since the end of last week, prices were slightly above 64 $/bbl and remained at this level for the first two days of this week. Yesterday’s price increase was conditioned by different circumstances, such as the decrease in the United States reserves, possible interruptions in crude production also in the United States as a result of a storm in the Gulf of Mexico and a new escalation in tensions with Iran, after a failed attack on a British oil tanker.

The futures of TTF gas in the ICE market for the month of August continue recovering during this week and settled yesterday, Wednesday, at 12.13 €/MWh, 20% over the historical minimum of two years of the June 27 and reaching values nearby at the beginning of June.

The API 2 coal futures prices in the ICE market for the month of August settled upwards again this Wednesday, July 10, at 60.10 $/t. Since May 23 this product was not traded above 60 $/t. The upward trend that this market is experiencing since the end of June slowed temporarily on Tuesday, July 9, when it was traded downwards, 3% below the settlement prices of the beginning of the week.

The CO2 emission rights futures prices in the EEX market for the December 2019 reference contract settled at 28.20 €/t on Wednesday, after remaining between 26 €/t and 27 €/t during the last three weeks. This price on Wednesday represents an increase of 19% compared to the lowest price of the last two months, at 23.74 €/t, reached on June 3.

The electricity futures of Spain and Portugal in the OMIP market settled yesterday, Wednesday, July 10, 2.9% higher than the previous Wednesday. In the case of the Spanish electricity futures in the EEX market, yesterday’s trading session ended with an increase of 2.6% in the same period. After these increases, the values of these products returned to be comparable to those of the first days of June, after settling between June 19 and 20 at their lowest values since the beginning of that month.

The futures for the year 2020, both in the OMIP and EEX markets for Spain and in the OMIP market for Portugal, remain with an increasing trend since the first days of June. This trend increased on Wednesday, July 10, in parallel with the CO2 emission rights future, settling at its highest values for more than 2 months, of 56.30 €/MWh in the case of Spanish futures in EEX and around 57 €/MWh in the case of Spanish and Portuguese futures traded in the OMIP market.

The French and German futures in the EEX market for the next quarter remain on the rise since Friday of last week. In the case of France, the settlement price on Wednesday was 6.0% higher than the previous Wednesday and in the case of Germany the increase was 7.0%. The futures of France and Germany for the next year 2020 are maintaining an upward trend since the beginning of June and settled yesterday at 52.40 €/MWh and 50.40 €/MWh respectively.

In mainland Spain, the beginning of this summer week was less hot, with the drop of 0.3 ºC in average temperatures compared to the first three days of last week. This caused that in the same period the electricity demand was reduced by 3.9%.

The wind energy production rose 11% so far this week, compared to the average values of last week. For the next week it is expected that the generation with this technology will recover slightly, according to AleaSoft.

Regarding the whole of the photovoltaic and solar thermal energy production, in the first three days of this week it increased by 3.1% compared to the average of last week. At AleaSoft it is expected that the solar energy production will also grow next week.

All nuclear power plants are currently underway. From Monday to Wednesday of this week, the nuclear energy production increased by 5.1% compared to the same days of the previous week, in which there was a short unscheduled stop of the Ascó II plant from July 1 to 2.

The hydroelectric energy  production decreased again in the first three days of this week compared to the last days of July 1 to 3. This time the fall was 25%. 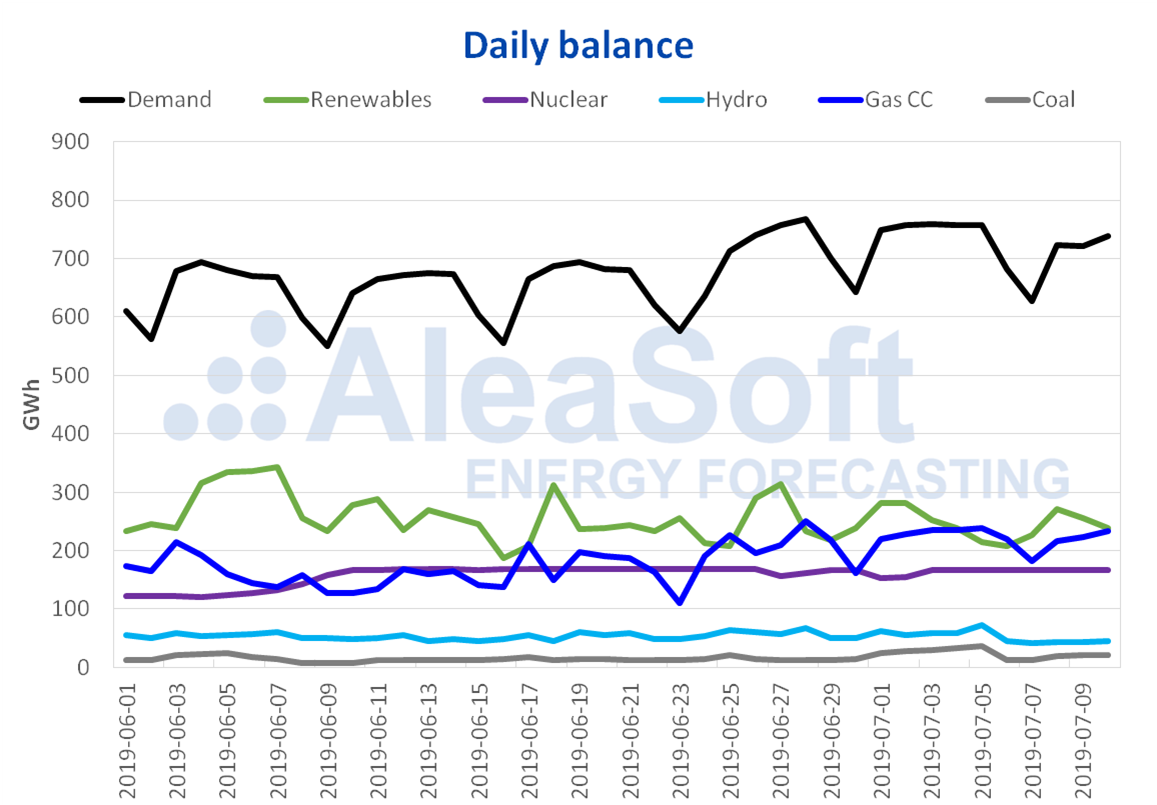 According to the latest Hydrological Bulletin of the Ministry for Ecological Transition, the level of hydroelectric reserves is currently 11 487 GWh, representing a decrease of 2.7% and 320 GWh compared to last week. The currently available reserves are equivalent to 76% of those available a year ago. On the other hand, reserves now occupy 49% of the total capacity of 23 281 GWh.

PrevAnteriorPhotovoltaic and self-consumption: The two most mentioned words in the first half of 2019
SiguienteThe price reductions do not arrive in July to the electricity marketsNext
Menu
Facebook-f Twitter Linkedin Instagram