France: leading European nuclear energy producer also with high prices in the first half of 2021

AleaSoft, August 13, 2021. The French market registered high electricity prices in the first half of 2021, as did the rest of the European electricity markets. The main causes were the rise in gas and CO2 emission rights prices. France continues to be a net exporter of electricity, generated mainly from nuclear energy.

The EPEX SPOT market in France is normally situated on the range of the lowest priced markets in Europe. In recent months, it has been affected like the rest of the European markets by the rises in CO2 emission rights and gas prices. 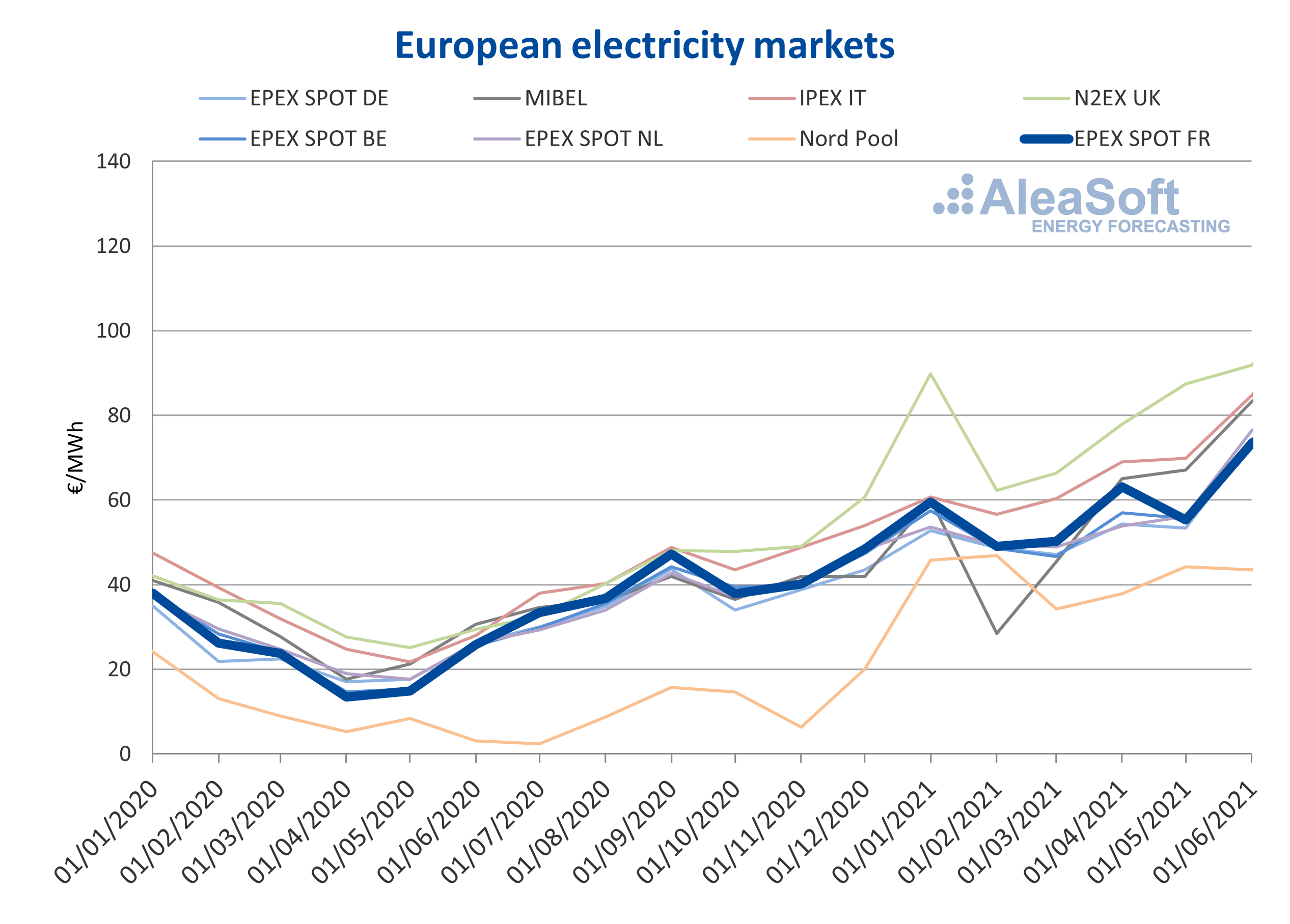 In general, the prices during the first half of 2021 increased by 44% compared to the previous semester. If the comparison is made in year-on-year terms, the growth figure rises to 147%. The increasing trend observed in the French market prices is largely due to the rise in CO2 emission rights and fuel prices, which have also affected the rest of the European markets. 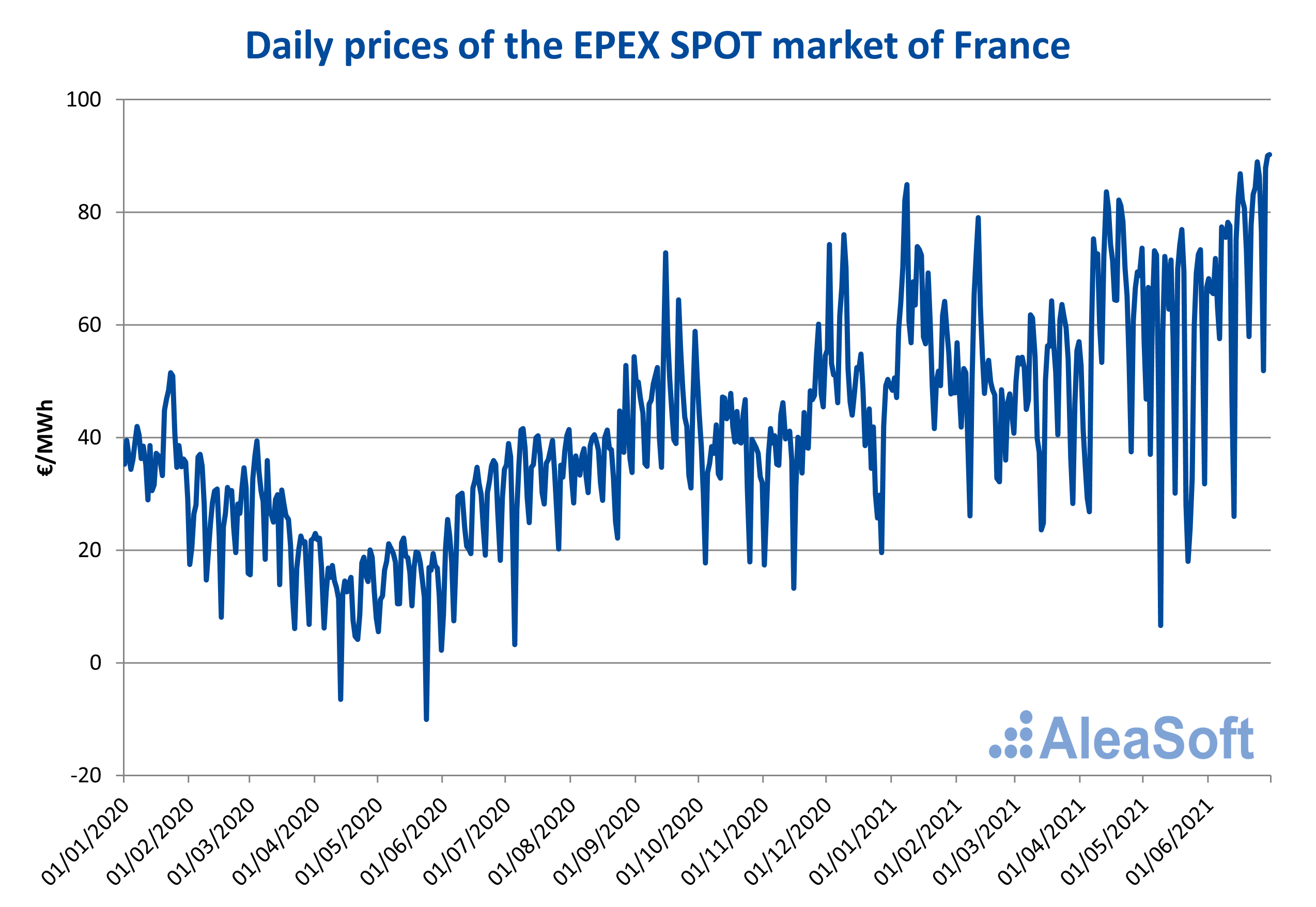 The highest hourly price during the six months analysed was reached in the last hour of April 7, when the market closed at a price of €163.77/MWh. These high prices registered in April were mainly due to a drop in temperatures and a low renewable production.

Negative prices are usually produced in the EPEX SPOT market in France at times when national demand is low and production from renewable sources is high. An example of a day with these characteristics was May 9 of this year. The minimum hourly price for the first semester of 2021 was reached that day at 2 in the afternoon, with a value of ‑€66.18/MWh and a daily price of €6.65/MWh, which was also the daily minimum of the six-month period. Such a low daily price had not been reached on the French market since July 5, 2020.

In the first half of 2021, the electricity demand in France exceeded the record for the same period of 2020 by 8.0%. This recovery is due to the effects that the measures taken in the country as of March 2020 to stop the spread of the COVID‑19 provoked in the demand. The most notable increase was in the second quarter of 2021, when the demand increased 13% year-on-year.

In the second week of January 2021, the demand reached daily maximums that had not been seen since 2017, as a result of the low temperatures in that period. In general, the monthly values were similar to those of 2019 throughout the semester, evidencing the recovery of demand from the effects of the pandemic. 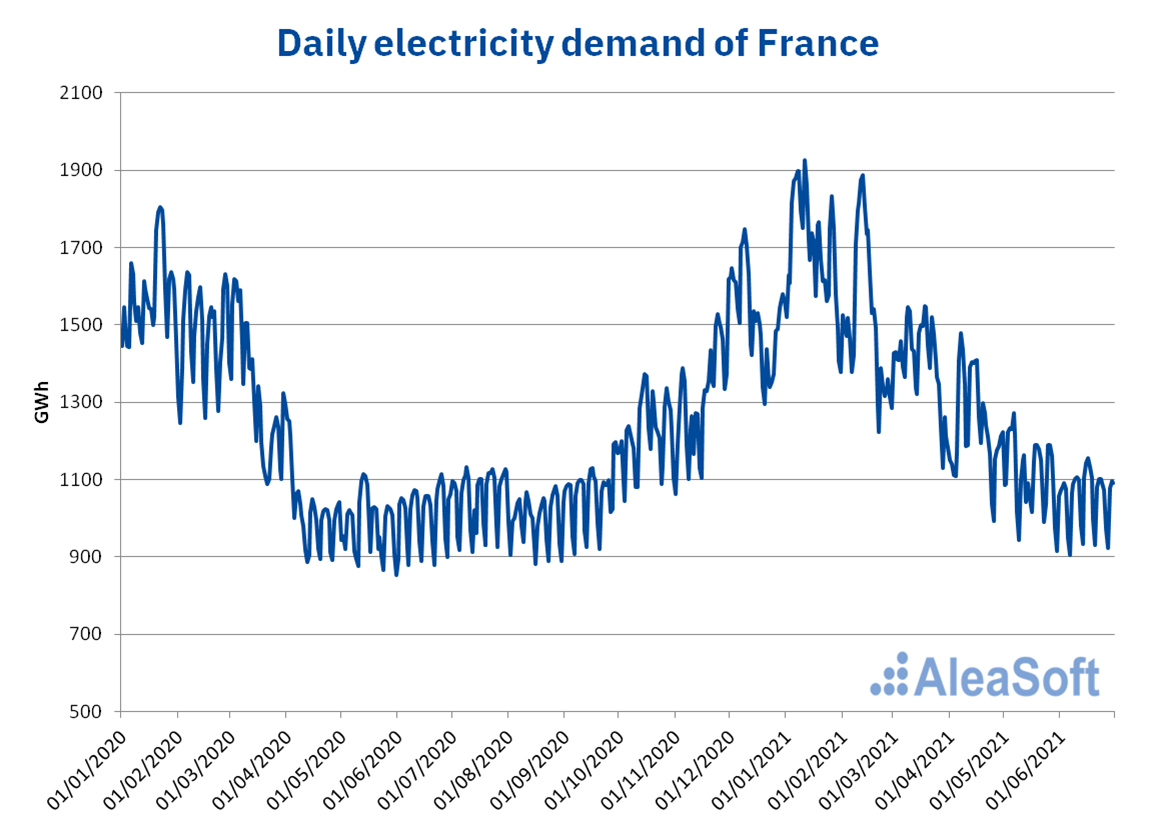 France is the country that heads the list of major producers of electricity from nuclear energy in Europe and the second in the world, behind the United States. For more than a decade, almost half of the installed capacity in the French territory for electricity generation corresponds to this technology, so it is not surprising that it occupies about three-quarters of the electricity generation mix.

The nuclear energy production was predominant in the electricity mix during 2020 and the first half of 2021, seconded by the hydroelectric energy production. The nuclear production increased 4.3% year-on-year during the first six months of 2021 and covered 69% of total generation. Compared to the previous semester, the increase in nuclear production was 13%. France aims to reduce by 50% the electricity generated with nuclear energy by 2035. The plan is to close 14 of the 58 nuclear reactors it currently has. 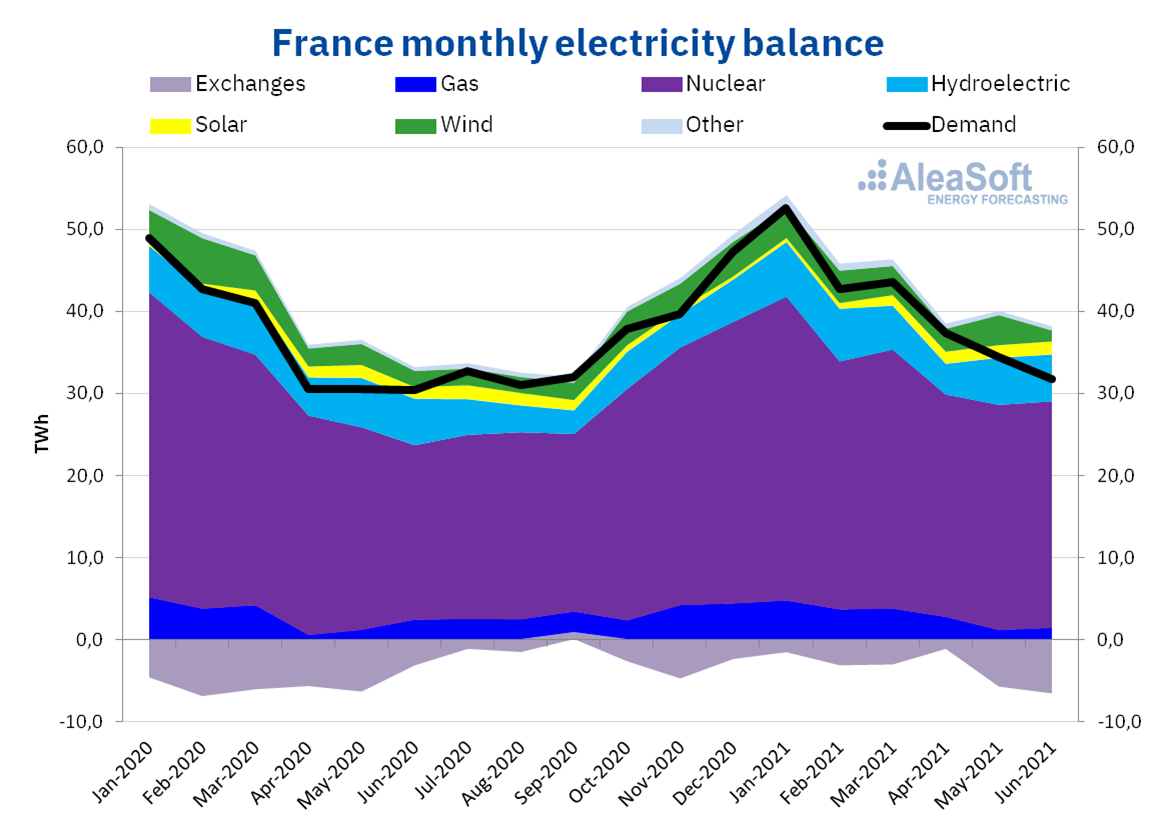 The renewable energies contributed 23% to the electricity generation mix between January and June 2021, registering decreases of 2.9% compared to the same period in 2020, due to the falls in hydroelectric and wind energy production. On the other hand, the solar energy production rose 8.5%. However, comparing with the previous semester, there was a recovery in production with renewable technologies of almost 25%, where there was also a rise in solar production of 12%, an increase of 39% in hydroelectric production and 8.6% from wind energy. By 2030, France plans to increase the portion covered by renewable energies in the nation’s energy mix by up to 40%.

The generation with fossil fuels ranked third in terms of contribution to the electricity balance in the first half of 2021. The variation that stood out the most among all technologies was that of coal production, which increased fivefold compared to the low production of 0.3 TWh in the same period of 2020, while it increased by 62% compared to the previous six months when it reached 1 TWh. The generation with gas registered a year-on-year increase of 1.6% and fell by 5.1% compared to the second half of 2020. The last coal-fired power plants are expected to close in 2022, in order to reduce by 40% the consumption in 2030 of the electricity produced with fossil fuels compared to 2012. 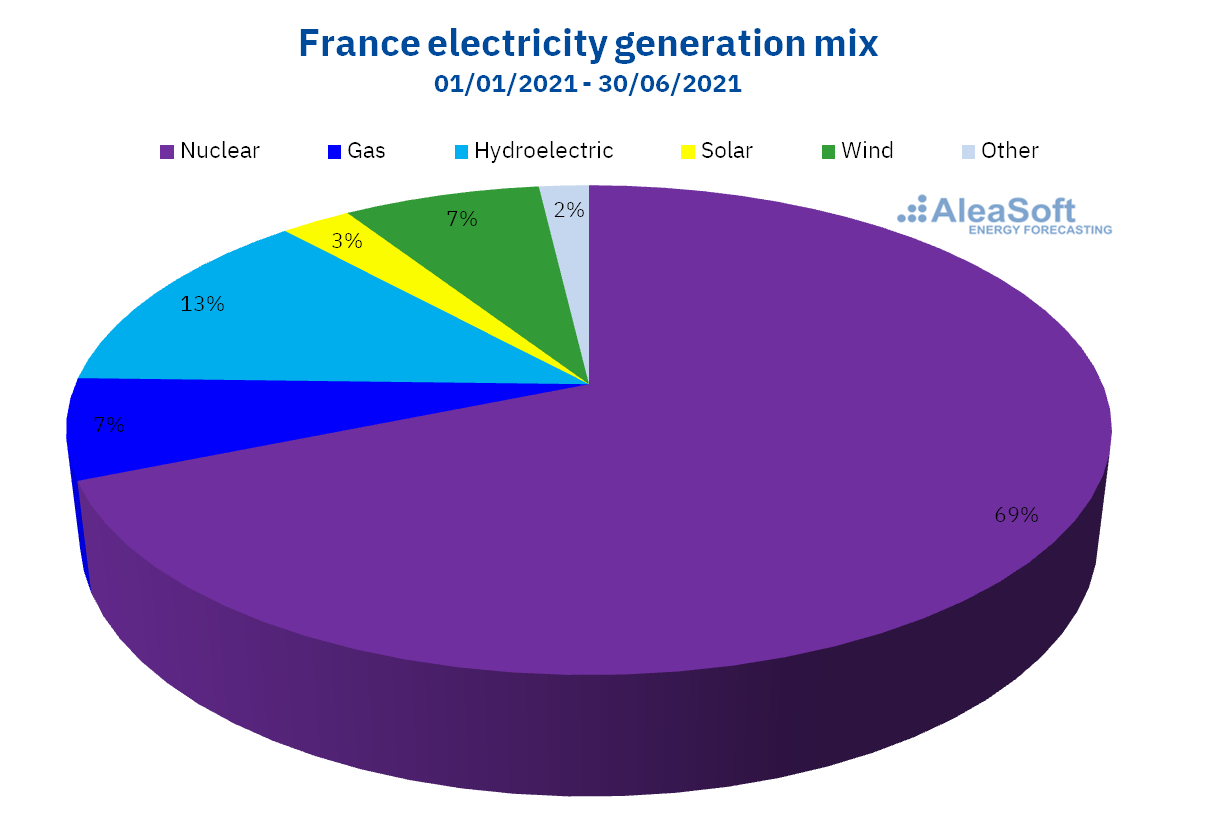 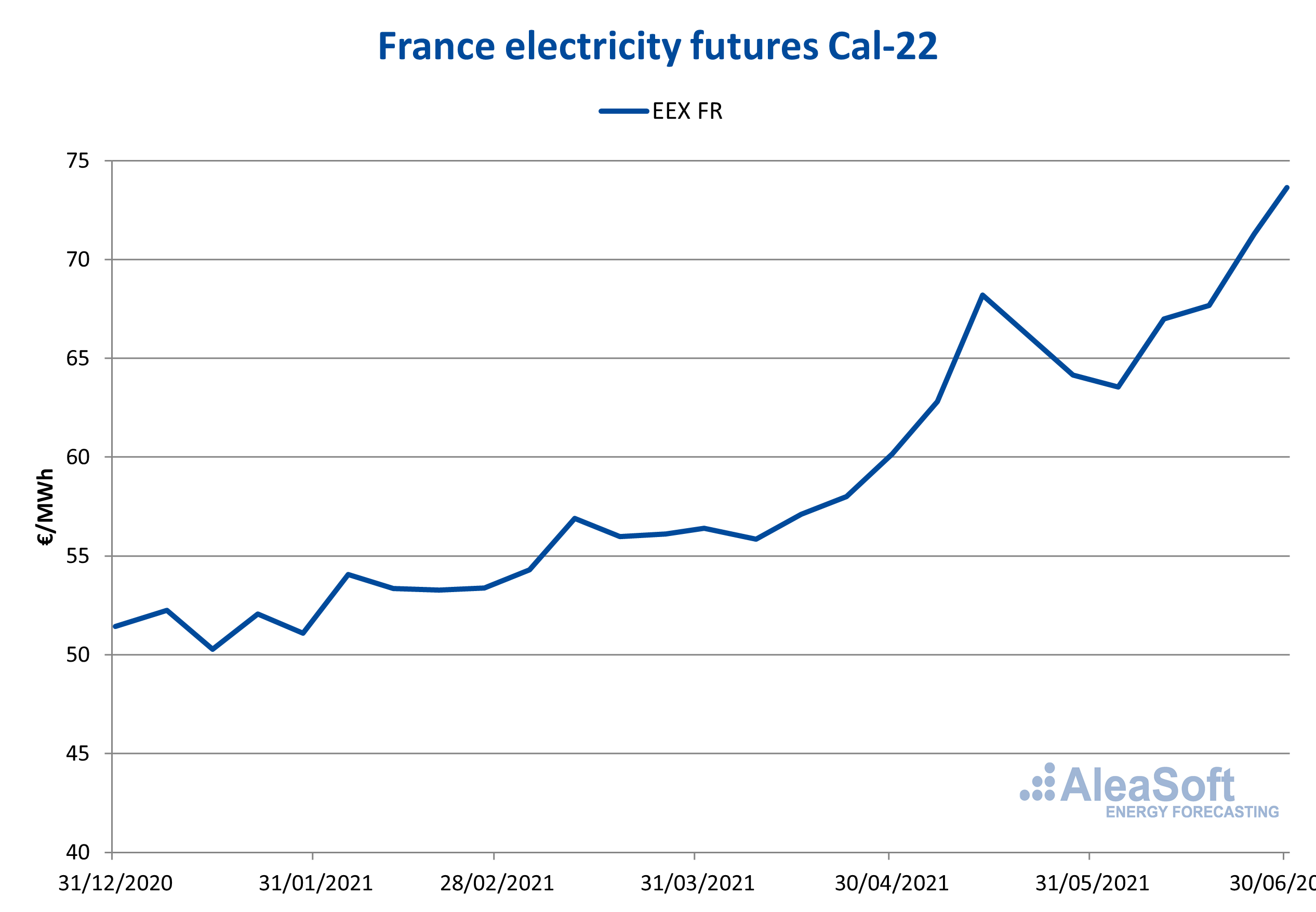 During the first semester of 2021, the energy exchanges between France and the countries to which its electricity system is interconnected were predominantly an exporter, as in the first and second semesters of 2020. Though if the balance of the first semesters of 2020 and 2021 are compared, a reduction of 30% in the latter can be noticed. On the contrary, compared to the second half of 2020, the first six months of the year as a whole registered an increase of 53%.

The countries to which the most energy was exported during the first half of 2021 were, in decreasing order, the United Kingdom and Italy. The difference between exports and imports to and from the United Kingdom was 8.3 TWh, while in the case of Italy it was 7.3 TWh, in both cases with an export balance. On the other hand, the only country with which the balance was in the importing direction was Belgium, with a notable increase of 52% in the volume of exchanges compared to the second half of 2020 and 48% compared to the first half of the same year. In the case of the interconnection with Spain, this was the one with the highest circulation for that semester. 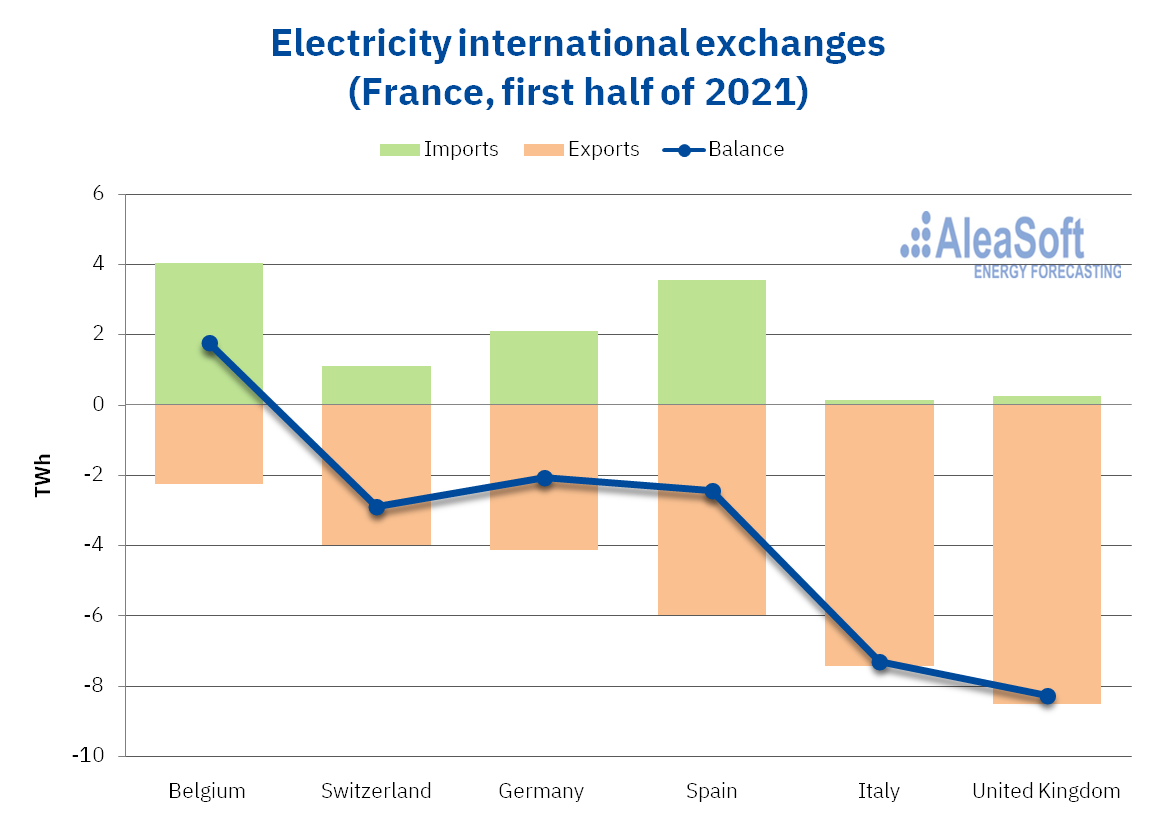 Source: Prepared by AleaSoft using data from ENTSO-E and REE

AleaSoft’s analysis on the prospects for the German market

AleaSoft is organising its next webinar with the title “Energy markets in the recovery from the economic crisis one year later“, that will take place on October 7. On this occasion, AleaSoft experts will be joined by speakers from Deloitte to analyse the evolution of the markets just one year after having organised a webinar in October 2020, also with speakers from this company. The prospects for financing renewable energy projects and the importance of forecasting in audits and portfolio valuation will also be discussed.