During most of the first week of October, the prices of Brent oil futures for the month of December in the ICE market showed a decreasing trend. At the end of the week, the prices experienced increases of $0.02/bbl on Thursday, October 3, and $0.66/bbl on Friday, October 4, when compared with the prices of the respective previous day. Despite these increases, the settling price on Friday, October 4, with a value of $58.37/bbl, was 4.4% lower than that reached on Friday, September 27. These price increases are influenced by the decline in US oil reserves reported last week. However, the general downtrend of the week is due to the recovery of production in Saudi Arabia and the fears of the slowdown in the world economy.

During the past week, the prices of TTF gas futures in the ICE market for the month of November ranged between €15.77/MWh and €16.76/MWh. The maximum increase experienced that week corresponded to Tuesday, October 1, with an increase of 2.3% over the previous day. The most significant drop in prices occurred on Wednesday, October 2, with a decrease of 4.5%. The settling price on Friday, October 4, was €15.77/MWh, 5.5% lower than the one reached on the previous Friday.

The first three days of the month of October, the API 2 coal futures prices in the ICE market for the month of November, maintained a downward trend, going from $61.40/t on Tuesday, October 1, to $60.40/t on Thursday, October 3. On Friday, October 4, this trend changed, producing an increase of 0.8%. Thus, the settling price of this day was $60.90/t, only $0.10/t lower than the one reached at the beginning of the week, on Monday, September 30.

The CO2 emission rights futures prices in the EEX market for the December 2019 reference contract decreased during the last days of the past week. At the beginning of the month, on Tuesday, October 1, a price of €25.04/t was reached, 1.3% higher than the one of the previous day. But, as of that day, the prices declined continuously. On Friday, October 4, the settling price was €22.95/t, €2.09/t less than the first day of the month and 9.3% below the value reached on Friday of the previous week, of €25.30/t. The settling price of Friday, October 4 is the lowest reached by this product since April 3 of this year. 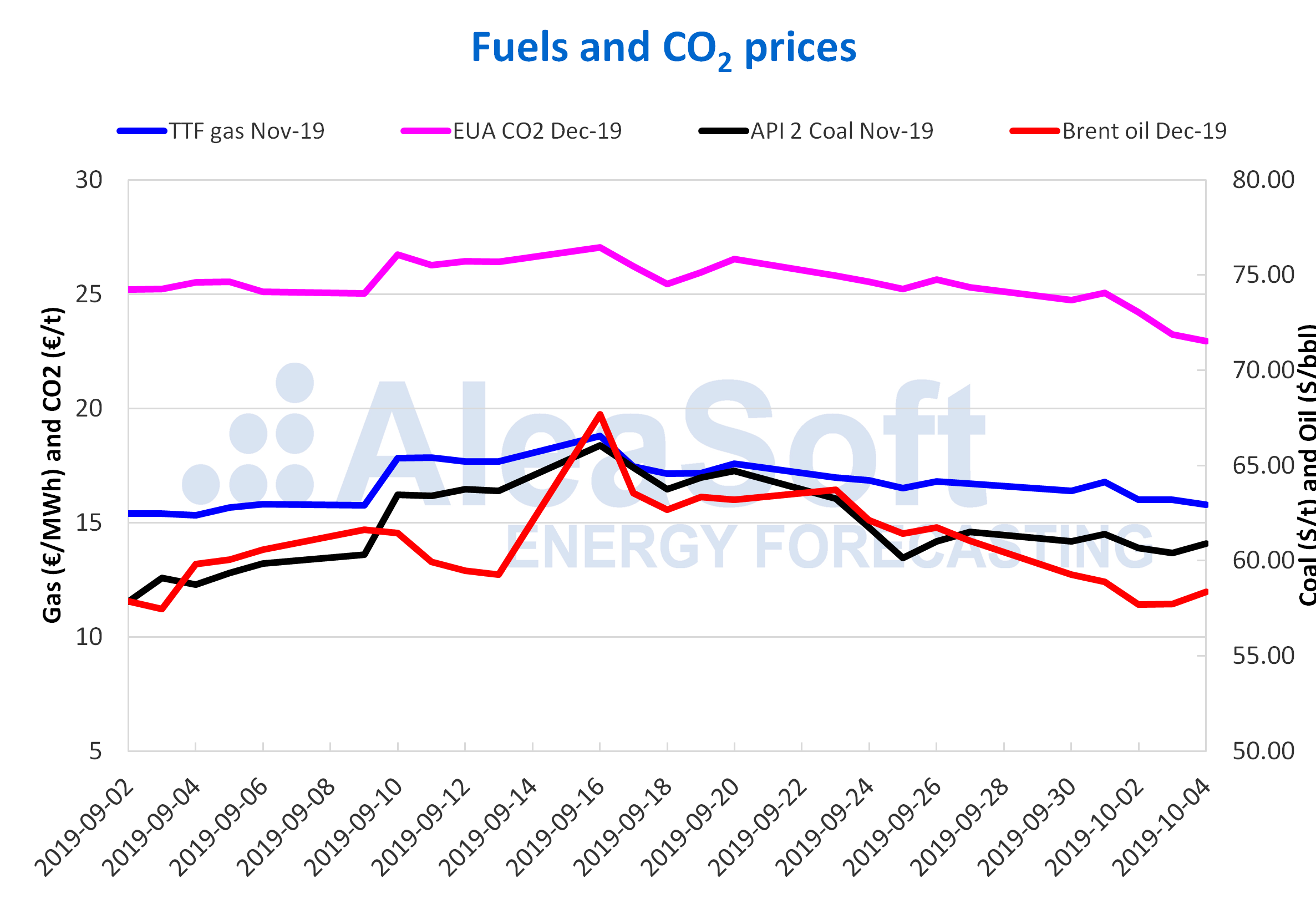 The prices of all the European electricity markets analysed by AleaSoft recovered during the past week compared to the week of September 23, when a peak of renewable energy production occurred and negative prices appeared in some markets. The EPEX SPOT market of Belgium is the one with the largest increase with an 18.4% increase in the weekly average price. The average price of Belgium during the past week was €36.61/MWh, which is almost €6/MWh above the price of the previous week. On the other hand, the increase was felt to a lesser extent in the IPEX market of Italy, where the difference was 0.5%. The Italian market continues to be the highest-priced in Europe, closing last week with an average of €55.16/MWh.

On the other hand, the electricity demand during the past week had a heterogeneous behaviour in the different analysed countries. While autumn already lowers temperatures throughout Europe, the electricity demand in some countries such as Belgium, the Netherlands, France and Great Britain increased and in others such as Germany, Portugal, Spain and Italy it decreased. The British demand was the one with the greater difference with respect to the previous week, with an increase of 6.3%. On the other hand, the most significant drop was the German one, with a 3.8% decrease in its national demand, favoured by the effect of the national holiday of last October 3, German Unity Day.

The prices for today, Monday, October 7, are shown upwards. The Italian market maintains its position with the highest price in Europe, closing with an average daily price of €61.38/MWh. Meanwhile, the N2EX market of Great Britain takes the place of the lowest price, with €43.73/MWh. The Nord Pool market of the Nordic countries and the EPEX SPOT markets of Belgium, the Netherlands, Germany and France follow it closely. The latter with the highest difference, just €1/MWh above. Halfway between the lowest-priced markets and the Italian one, is the MIBEL market, which had an average price of €50.50/MWh. 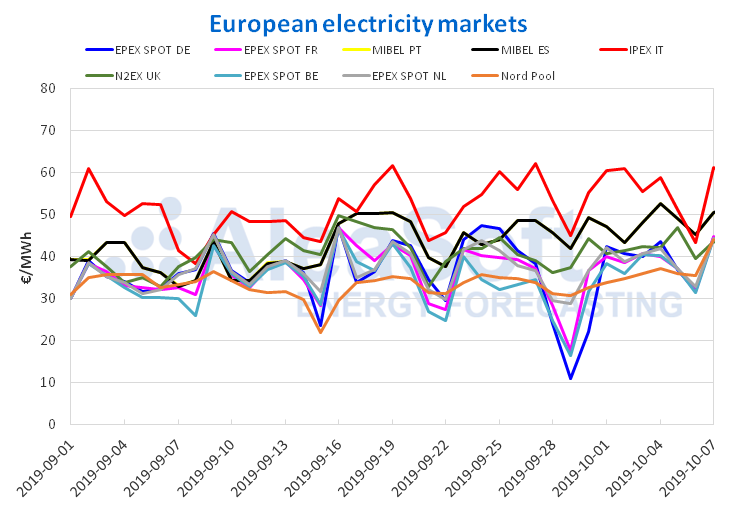 The European electricity futures prices for the first quarter of 2020 remained with a downward trend last week. The prices that presented the most pronounced fall were those of the EEX and ICE markets of UK that traded on Friday, October 4, 5.0% and 5.1% lower than the previous Friday, respectively. On the other hand, the ICE and NASDAQ markets of the Nordic countries remained with little variation at the end of the last week compared to the previous one.

The European electricity futures for the year 2020 behaved similarly with declines in most markets, highlighting the decline in the ICE and EEX markets of UK, up 4.6% in each case. Also for this product the smallest variations were registered in the ICE and NASDAQ markets of the Nordic countries, with ‑0.1% and 0.1%, respectively.

The upward trend in wind energy production continued last week in most European countries, although this time the growth was generally moderate. In Spain and Portugal there were similar increases, 3.4% and 3.7%, respectively. On this occasion, the biggest increase was in Italy, where 20% more energy than in the week of September 23 was generated. In France there was a sharp fall of 26% while in Germany the production with this technology increased by 6.0%. During this week, at AleaSoft it is expected a significant increase in wind energy production in Germany and decreases in the rest of the countries analysed. 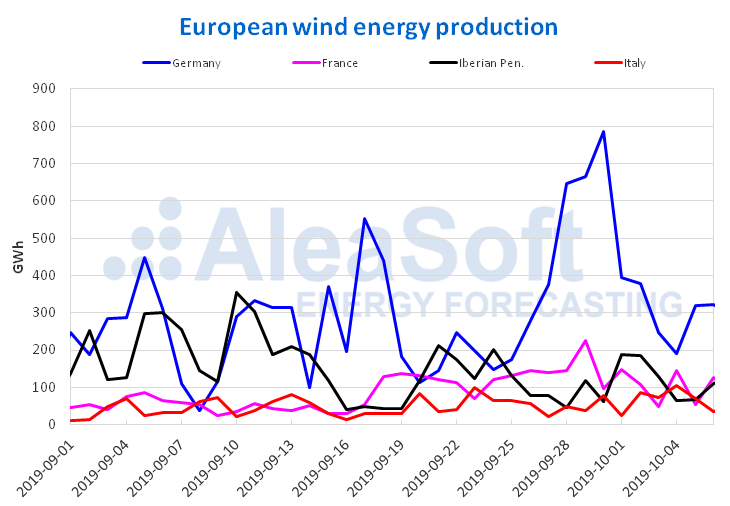 The solar energy production, which includes photovoltaic and solar thermal technologies, decreased 7.4% in Spain last week compared to the previous week. The lower amount of hours of sunshine at the beginning of autumn affects the generation with this renewable source, which also fell a 13% in Germany. In Italy, the production was only 0.6% higher than that of the last week of September. For this week, the solar energy production is expected to recover in Germany, remain stable in Italy and fall in Spain. 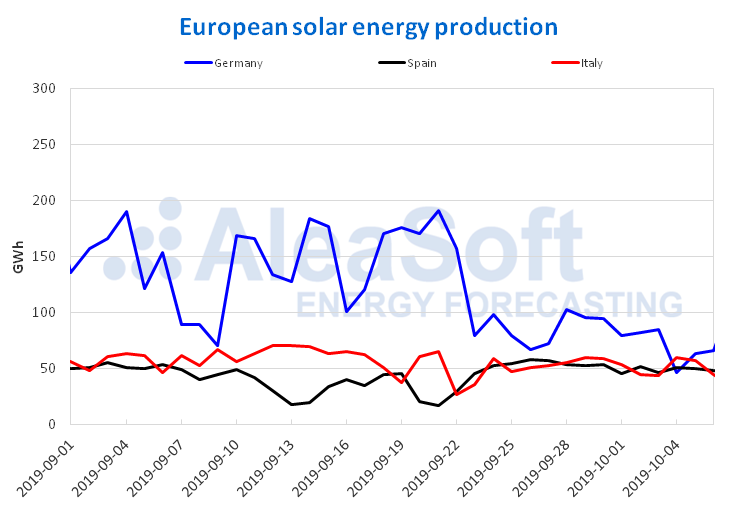