AleaSoft, October 21, 2019. The prices of most European electricity markets increased last week due to the decline in the energy production with renewable technologies, both wind and solar, according to the analysis carried out by AleaSoft. In the case of the MIBEL market in Spain and Portugal, the increase in the wind energy production favoured the decrease in prices. The Brent, gas, coal and CO2 futures ended the week with a downward trend.

The last days of last week, the prices of the Brent oil futures for the month of December in the ICE market remained between $59.91/bbl of Thursday, October 17, and $59.42/bbl of Wednesday and Friday, although on Thursday the price increased 0.8% compared to Wednesday. On Friday the price fell another 0.8% recovering the value of Wednesday. This decline is related to global economic growth concerns, accentuated after data on China’s growth in the third quarter were made public, which were lower than expected. At AleaSoft it is expected that in the coming days the behaviour of this market will continue to be influenced by the economic outlook, so the prices should remain stable with a tendency to fall.

The prices of the TTF gas futures in the ICE market for the month of November the last days of the week of October 14 began a downward trend, although the overall behaviour of the week was very stable. On Thursday, October 17, the settling price was €16.03/MWh, 0.3% lower than the previous day. On Friday, the price decreased 0.4% compared to Thursday and reached a value of €15.97/MWh. This price was the lowest of the week of October 14, 0.7% below the maximum price of the week, of €16.07/MWh, recorded on October 15 and 16.

The prices of the API 2 coal futures in the ICE market for the month of November declined continuously throughout the past week. As a result of these declines, on Friday, October 18, the settling price was $60.50/t. This value is 2.7% lower than that corresponding to the previous Friday, of $62.20/t, and is the second lowest value recorded so far this month, after the $60.40/t of Thursday, October 3.

The prices of the CO2 emission rights futures in the EEX market for the December 2019 reference contract began to decline in the last days of last week. After the maximum value of the week and so far this month, of €26.31/t, was reached on Wednesday, October 16, on Thursday, October 17, and on Friday, October 18, price reductions occurred compared to the previous day of 1.0% and 0.7%, respectively, so the settling price on Friday, October 18, was €25.87/t, 1.7% below the maximum price of last week, but still 7.1% higher than the minimum price of that week, of €24.15/t, corresponding to Monday, October 14. The behaviour of this market during the past week was influenced by the Brexit negotiations, with rises the days before the agreement between the United Kingdom and the European Union was reached, from which it began to descend. At AleaSoft it is expected that this week the market will continue to be strongly influenced by the negotiations around Brexit. If the British parliament does not approve the agreement reached and there is an exit without agreement on October 31, the prices are expected to fall, and on the contrary, if the agreement is approved, the prices could rise. 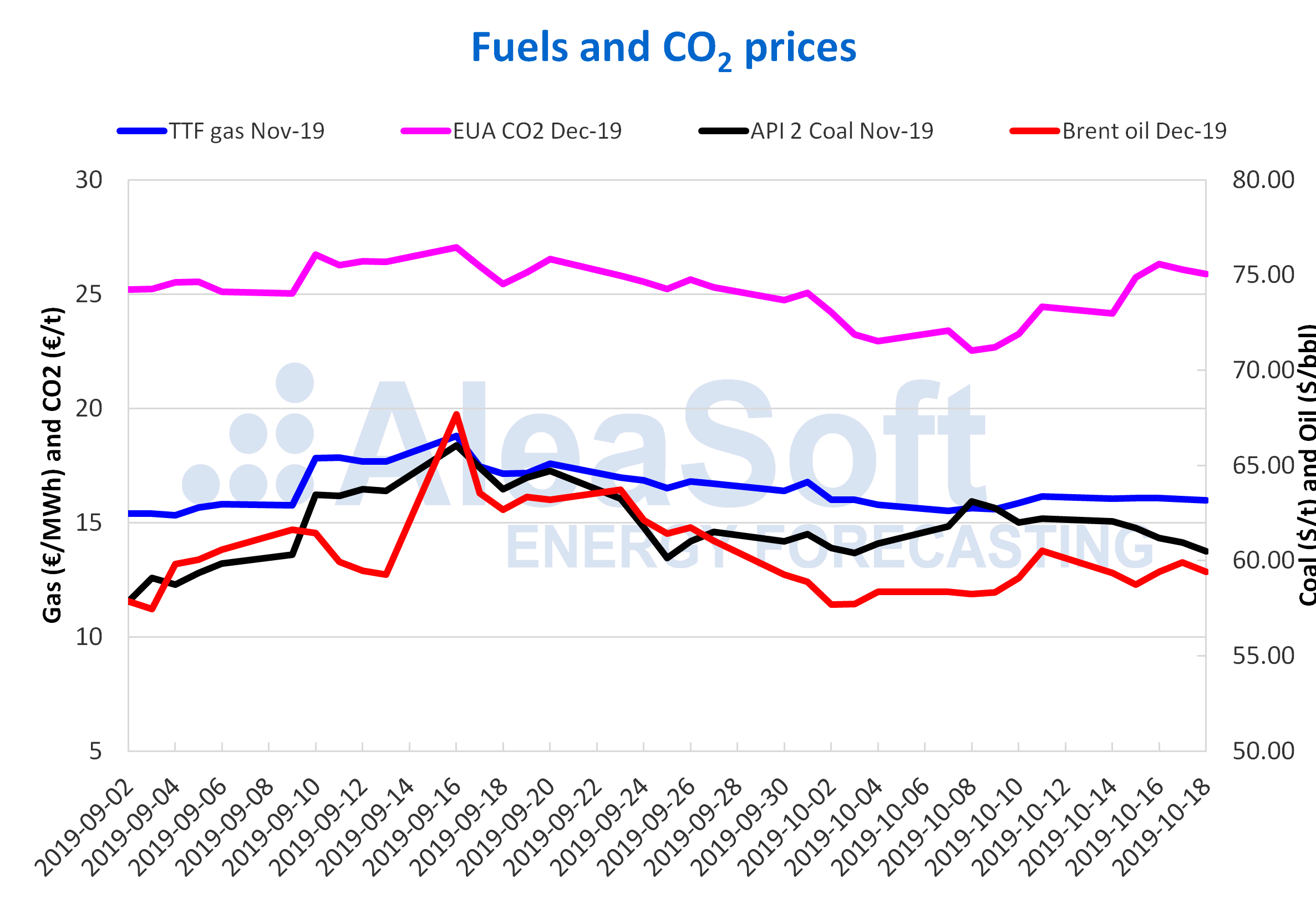 The prices of most European electricity markets increased during the last week compared to the week of October 7. The EPEX SPOT market in Germany, with a weekly average of €37.96/MWh, was the one with the largest increase, with a variation of 25% compared to the average price of the previous week. On the other hand, the prices of the MIBEL markets in Spain and Portugal and the Nord Pool market in the Nordic countries decreased. The Nord Pool market, with a weekly average of €36.83/MWh, regained its position as the market with the lowest prices of the analysed markets and presented a 1.4% drop compared to the average price of the week of October 7. In the case of the MIBEL market of Spain and Portugal, there were decreases of 5.9% and 5.6% respectively. The rest of the markets experienced increases between 14% and 18%.

The prices of most of the markets analysed for Monday, October 21, increased compared to those of Monday, October 14, with the exception of the IPEX market in Italy where they decreased by 16%, settling with a daily average of €51.17/MWh. The Iberian market of Spain and Portugal, with an increase of 28% compared to last Monday, positioned itself as the one with the highest price in Europe for today, with a daily average of €54.34/MWh. On the other hand, the Nord Pool market in the Nordic countries was the one with the lowest price, closing at €39.31/MWh. The rest of the markets settled with prices ranging between €43.44/MWh and €44.65/MWh. 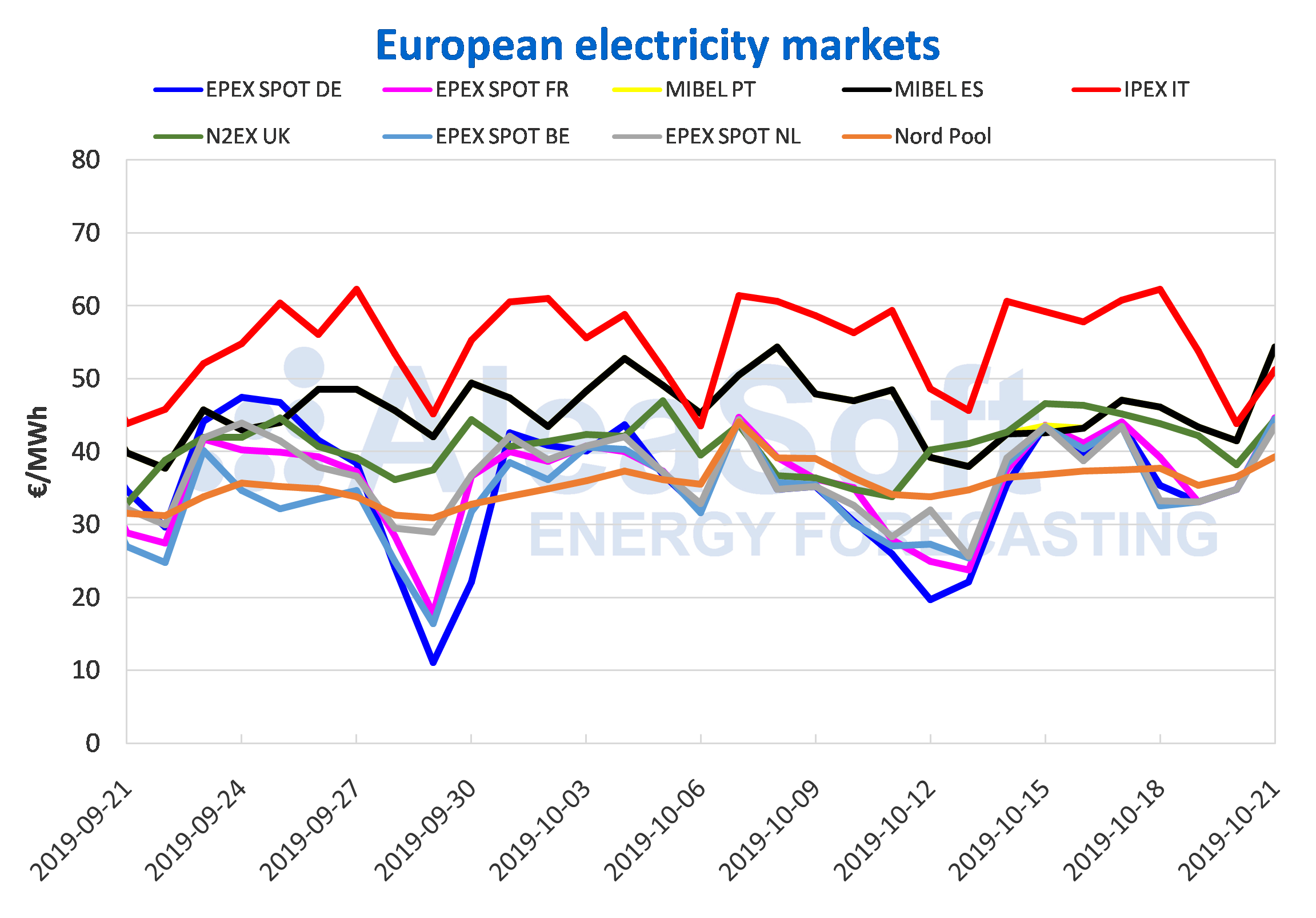 The prices of the electricity futures for the first quarter of 2020 fell for the Iberian Peninsula. In OMIP, both Spain and Portugal, this product presented drops of 1.0% last Friday, October 18, compared to Friday, October 11. In addition, the price of Spain’s futures for the next quarter in the EEX market also fell, by 0.9%. Week‑on‑week price declines are also seen for Great Britain, both in futures traded in the EEX market and in the ICE market, of 1.7% and 1.3%, respectively. The rest of European futures markets recorded increases in this product during the past week. The EEX market of France was the one with the smallest increase, of 0.2%. Meanwhile, the one with the greatest increase was the NASDAQ market of the Nordic countries, where the prices for the first quarter of next year rose 1.7%.

As for the electricity futures for the year 2020, they behaved similarly to the quarterly futures. In OMIP of Spain and Portugal and EEX of Spain, they fell by 0.4% and 0.6%, respectively. As in the quarterly futures, the price of Great Britain’s futures fell both in the EEX market and in the ICE market, by 1.7% and 1.3%, respectively. Contrary to the behaviour of the quarterly futures, the prices of the Netherlands futures declined, but the change between the Fridays of the previous two weeks was only €0.01/MWh. The rest of the markets did increase compared to Friday, October 11, from €0.03/MWh of the Italian EEX market to €0.29/MWh of the German EEX market. 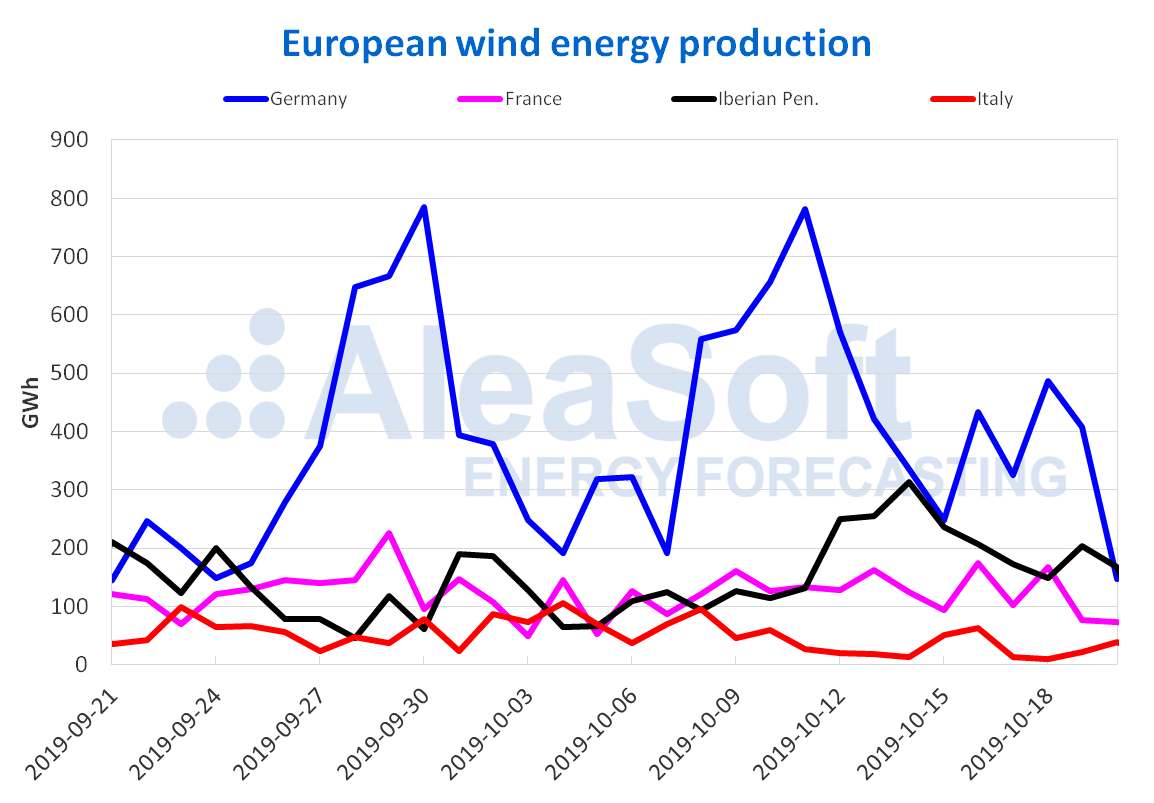 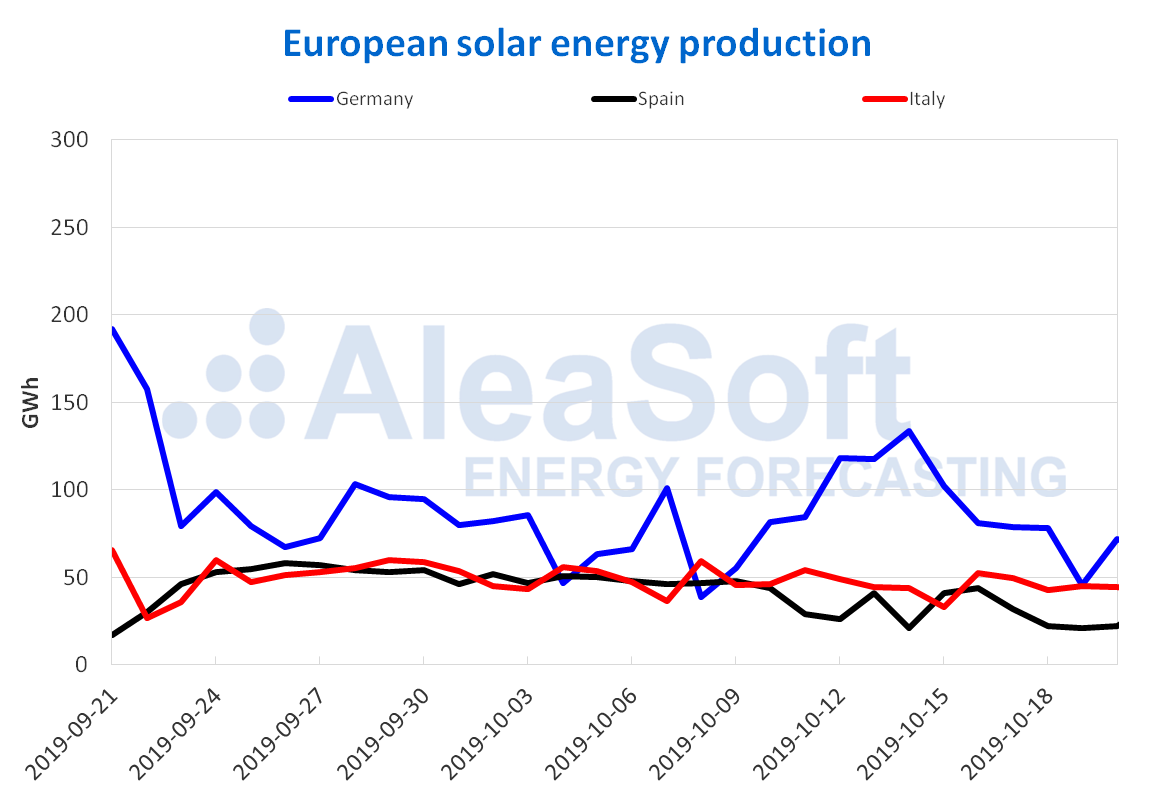 PrevAnteriorThe prices of the European electricity markets rise due to the decline in the wind energy production
SiguienteSecond period of the Spanish electricity market (2009-2014): The economic crisisNext
Menu
Facebook-f Twitter Linkedin Instagram