The solar energy production declined in most European electricity markets so far this week compared to last week’s average. In Italy the week began with a low production that recovered in the subsequent days, but even so, the decrease with respect to the average of the week of February 24 was 18%. In the French market, the production decreased slightly during this half of the week, falling 18% on average, while in the Iberian Peninsula the fall was 29%. The German market was the only one in which the solar energy production increased between Monday and Wednesday of this week, positioning 27% above the average production of last week.

In most markets, the total solar energy production from March 1 to 4 decreased year‑on‑year, except in Germany where it increased by 90%. The most notable falls were 31% in Italy and 21% in France.

At AleaSoft it is expected that this week’s solar energy production will increase in Germany compared to that of the week of February 24 and decrease in Spain and Italy. 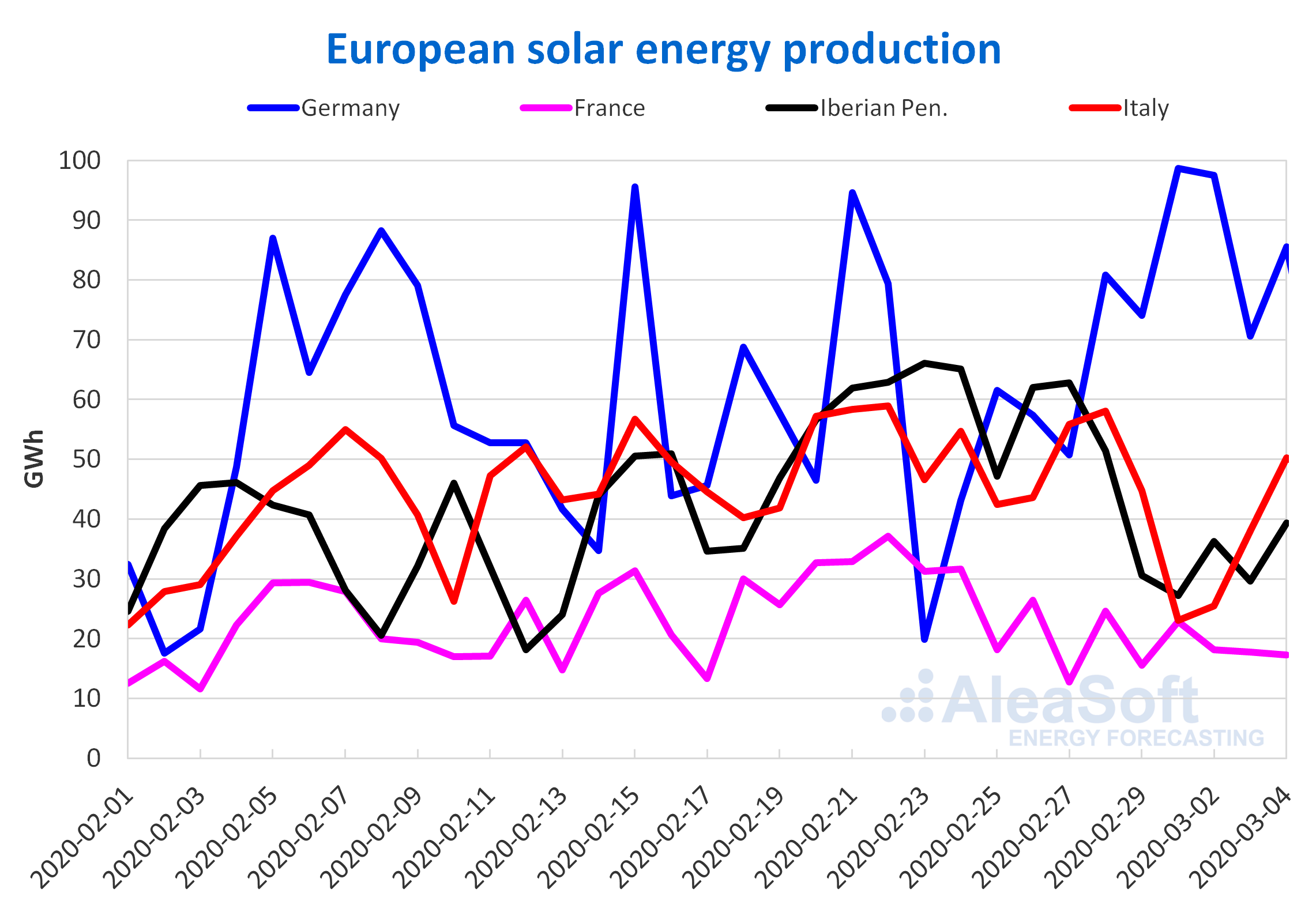 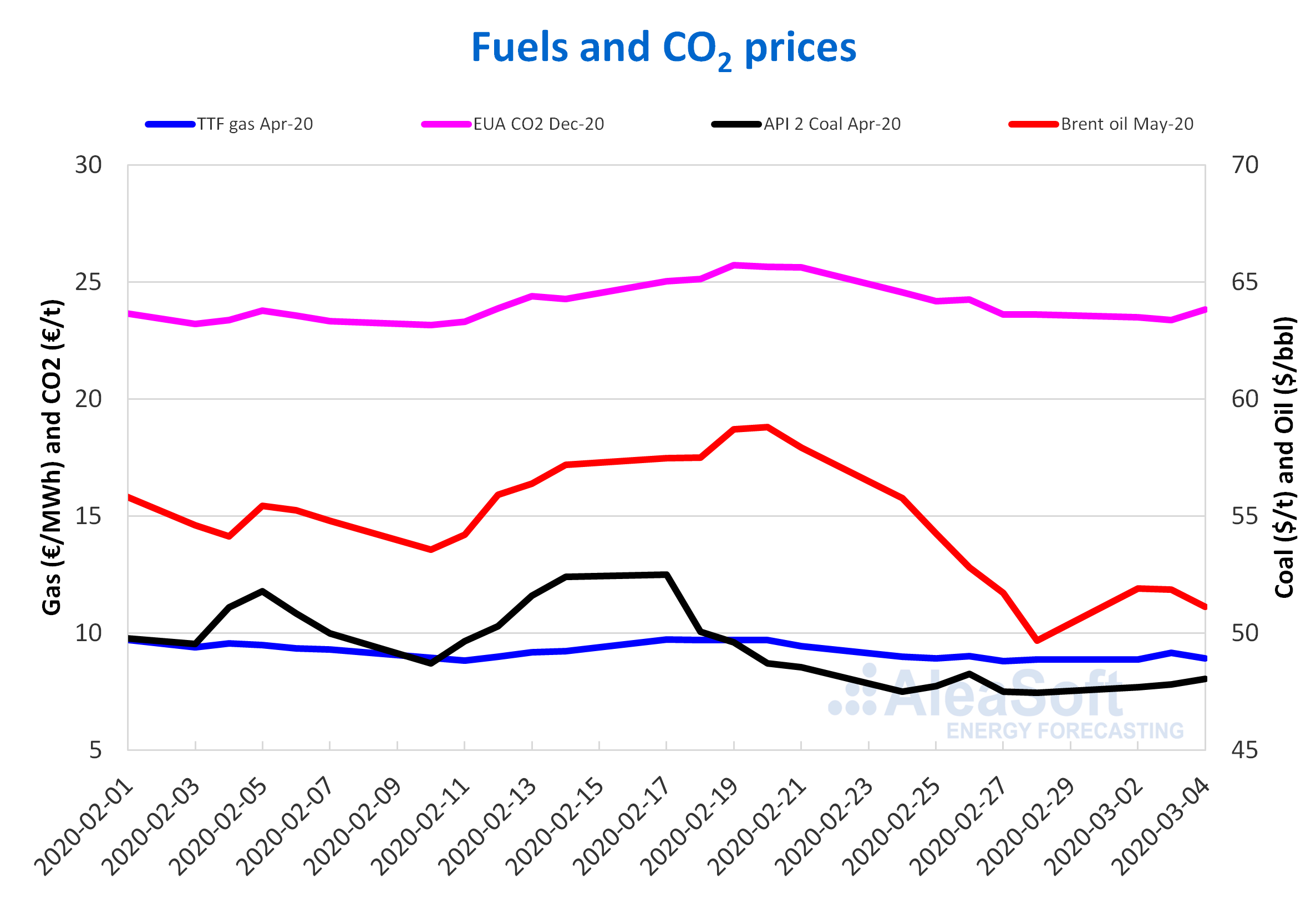 The wind energy production in the European markets had ups and downs during the first three days of this week compared to the average values of last week. On the one hand, it decreased by 59% and 47% in Germany and France respectively. Meanwhile, in the Iberian Peninsula and Italy it had increases of 44% and 14% respectively, including a record for 2020 of maximum daily production of 452 GWh in the Iberian Peninsula on March 2.

During the first four days of February, the wind energy production registered year‑on‑year increases in some markets of the continent, and falls in others. In Germany and France the declines were 29% and 22% respectively. On the other hand, in the Iberian Peninsula and Italy the increases were 114% and 65%.

At AleaSoft, this week’s wind energy production is expected to be lower than that of last week in most of the analysed markets, except in the Iberian Peninsula where it will continue to be higher by the end of this week. 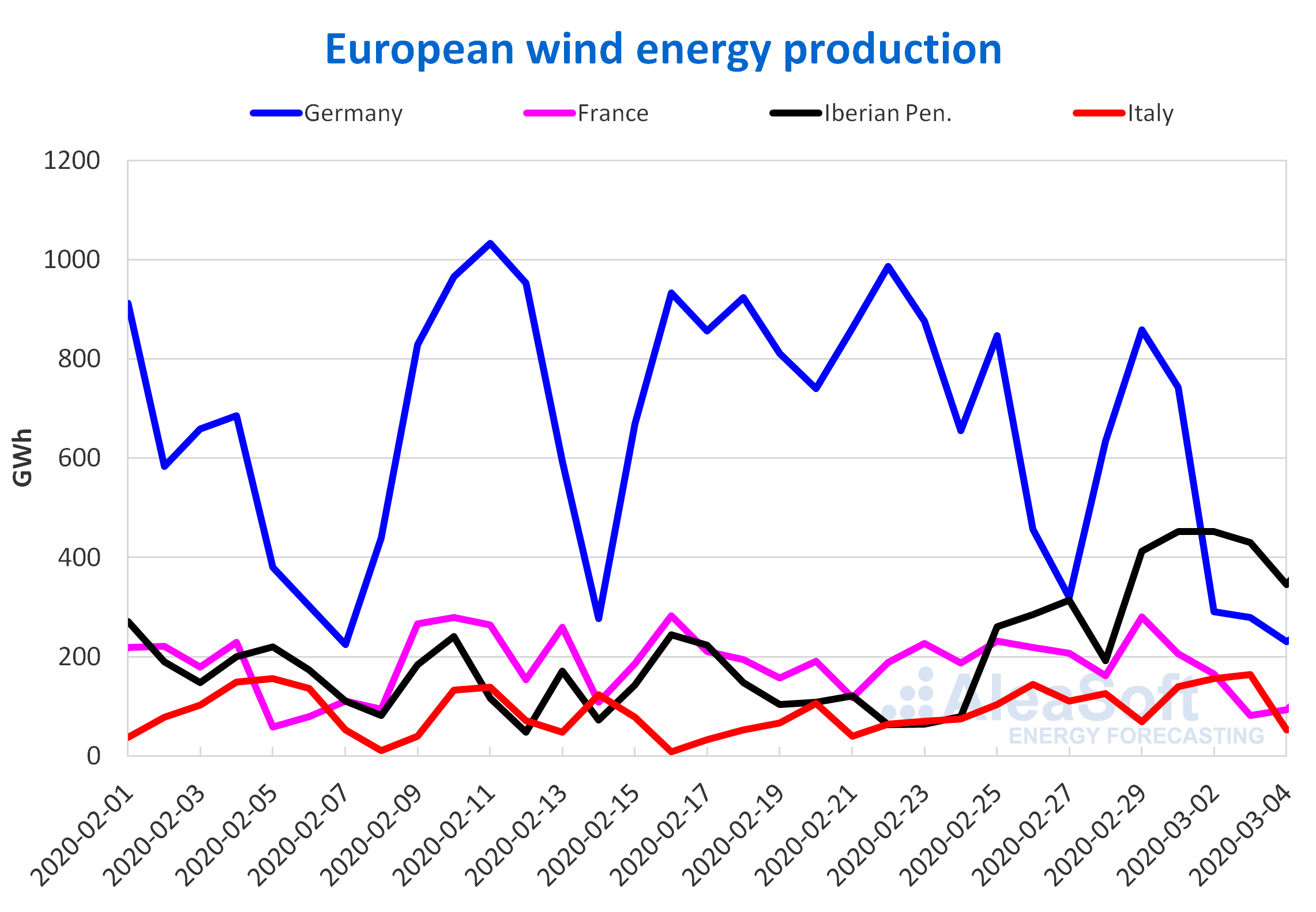 The electricity demand increased evenly from March 2 to 4 in the European electricity markets compared to the same period of last week, except in the German market where it fell 0.8%. In Portugal the rise was 12% due to the effect of the carnival Tuesday holiday, on February 25 of last week. Correcting this effect the increase in Portugal was 0.6%. The decrease of 2.1 °C in the average temperatures during this period in one of the markets most sensitive to this magnitude, the French, caused an increase of 7.3% of the demand in this market. In the Belgian market the fall of 0.9 °C in the average temperatures led to a 2.4% increase in demand. In Spain and Italy the increase was 1.8%.

At Aleasoft it is expected that at the end of this week the electricity demand in most markets will be higher than that of the week of February 24. 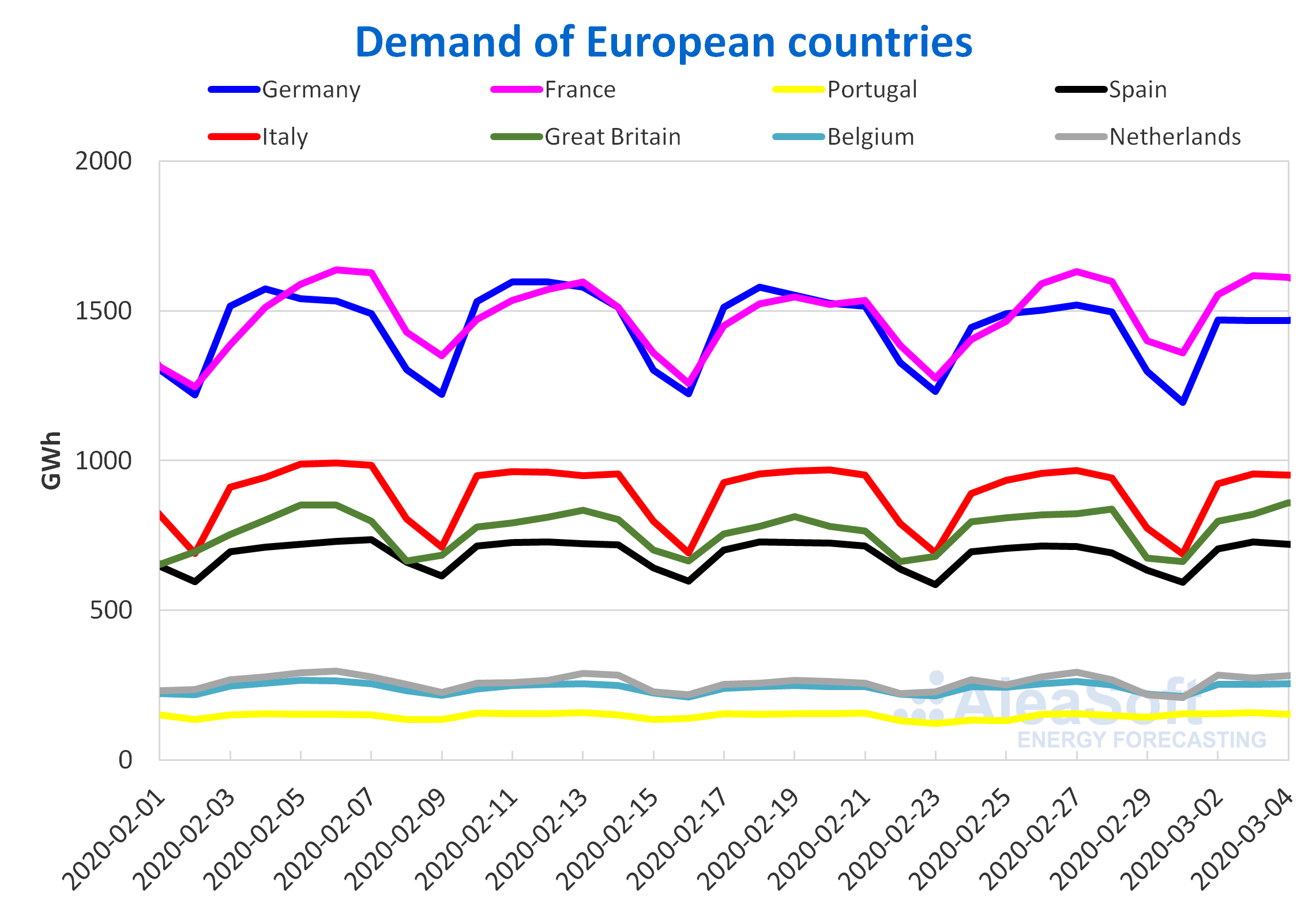 As for solar energy production, which includes photovoltaic and solar thermal energy, it fell 30% so far this week compared to the average values of the previous week. Comparing the first four days of March with the same period of the previous year, the generation from this renewable source fell 1.6%. The analysis carried out at AleaSoft indicates that this week the solar energy production will fall compared to the last week’s total.

The electricity demand of the Spanish market rose 1.8% from Monday to Wednesday of this week compared to the same period of the previous week. It is expected at AleaSoft that at the end of the week the demand will continue to be greater than that of last week. 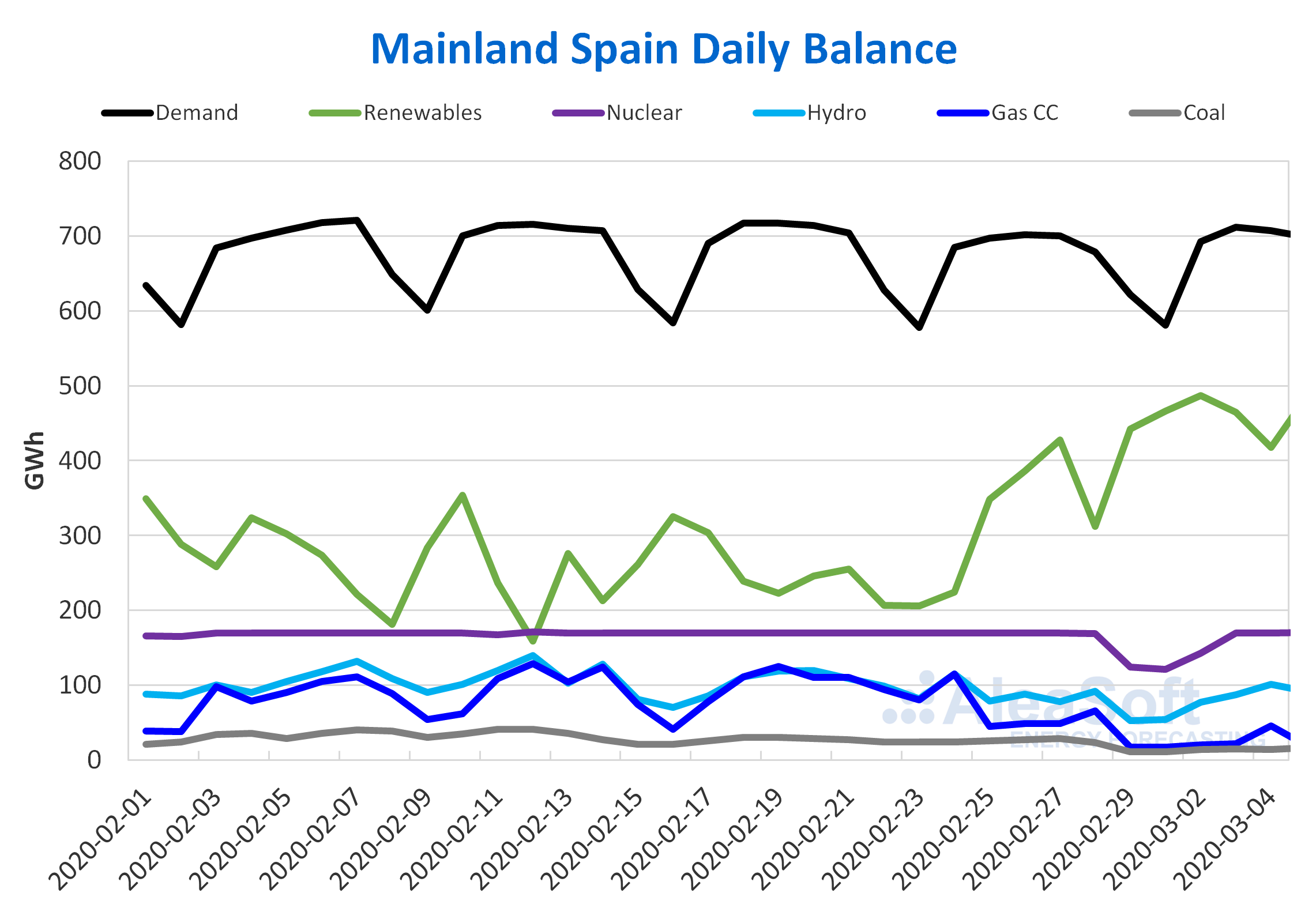 The hydroelectric reserves currently have 12 840 GWh stored, representing a 1.0% decrease from the previous bulletin, according to data from the latest Hydrological Bulletin of the Ministry for Ecological Transition and Demographic Challenge.

The behaviour of the prices in the European markets for the first days of the week of March 2 was in accordance with that predicted by AleaSoft in previous publications. The price increased in most European electricity markets due to a decrease in temperatures in several European countries, which meant an increase in electricity demand. In turn, the effect of lower wind energy production in most countries compared to the previous week was combined. The markets where this effect was most perceived were the EPEX SPOT market of Germany, France, Belgium and the Netherlands, and the N2EX market of Great Britain. In the German and French markets there were increases of more than 18% of its price compared to the counterpart days of the week of February 24.

So far this month, the Nord Pool market of the Nordic countries was the lowest priced market in most sessions. Exactly the opposite happened with the British market, which since the beginning of March positioned itself as the highest priced market, exceeding even €50/MWh on March 4.

The IPEX market of Italy remained the second with the highest price, although Italy did not suffer in the same way the decrease in temperatures registered by the rest of the markets. Another cause of this price increase is the decline that registered the Italian solar energy production in the first days of this week, despite a wind energy production exceeding that of the previous week.

The degree of coupling that the markets of Germany, France, the Netherlands and Belgium registered in the price of March 4 is remarkable. The prices for the four countries were between €39.34/MWh and €39.61/MWh, a range of only €0.27/MWh.

The AleaSoft‘s forecast for the rest of the days of the week is of lower prices in most markets, mainly due to lower demand over the weekend. However, at the end of the week the average prices will be higher than those of last week. 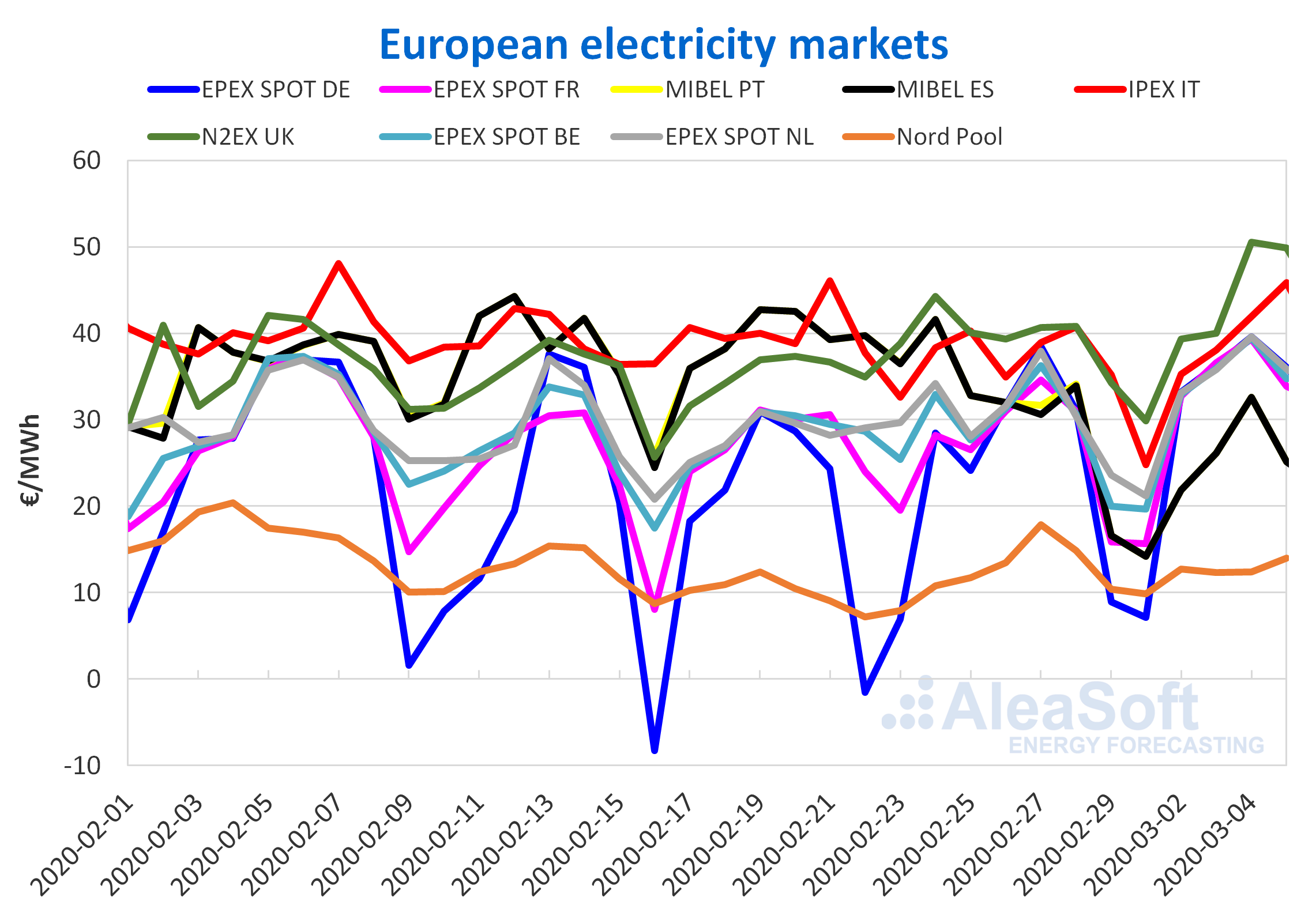 The MIBEL market of Spain and Portugal remained so far this week as the second lowest‑priced market among those analysed by AleaSoft. With an unusual position for this market and a 23% decrease compared to the same days of last week, this drop in prices was caused by a high wind energy production in the peninsula, which even marked during the first days of the month the 2020’s record so far. For the rest of the days of the week, at AleaSoft, the Iberian market prices are expected to remain relatively stable because, despite the effect of the lower demand of the weekend, a lower renewable energy production will prevent prices from falling. Even so, according to AleaSoft forecasts, by the end of the week the average prices of this market will be among the few of Europe that will fall compared to last week’s average.

The electricity futures prices of the Nordic markets for the second quarter of this year remain with a different tendency than the rest of the European markets. On Wednesday, March 4, the futures of the Nordic countries, both in the ICE market and in the NASDAQ market, decreased with respect to Friday, February 28, by 13.4% and 13.6% respectively. The EEX market of France and the OMIP market of Spain and Portugal registered small variations this Wednesday compared to the previous Friday, while the EEX market of Spain remained still when comparing the settlement prices of these two days. In the rest of the markets analysed by AleaSoft, an increase in prices between 0.7% and 2.0% could be observed.

The electricity futures prices for the year 2021 settled this Wednesday above the previous Friday in most European markets. The smallest variation, after the ICE and NASDAQ markets of the Nordic countries, which were stuck at the same price, was seen in the EEX market of Spain and OMIP market of Spain and Portugal that settled between 0.5% and 0.7% higher. In the rest of the markets there was a variation between 2.2% and 3.5%.

The Brent oil futures for the month of May 2020 in the ICE market, after reaching last Friday’s the lowest settlement price of the last two years, of $49.67/bbl, on Monday, March 2, they rose 4.5% to $51.90/bbl. On Tuesday and Wednesday the prices fell again until reaching a settlement price of $51.13/bbl on Wednesday, March 4.

The evolution of prices is still conditioned by the expansion of the coronavirus and the decrease in demand due to the reduction of displacements and industrial production. However, in the coming days, the results of OPEC meeting of this Thursday, March 5, and of the OPEC+ meeting of Friday, March 6, in Vienna will also have a great influence on prices. If greater production cuts that will be maintained after the end of March are finally agreed, this could favour a price increase.

In the case of the TTF gas futures prices in the ICE market for the month of April 2020, on Monday and Tuesday of this week they continued with the upward trend that began on Friday of the previous week. On Tuesday, March 3, a settlement price of €9.17/MWh was reached, the highest of the last ten days. But this Wednesday, March 4, the prices fell to reach a settlement price of €8.91/MWh, 2.8% lower than that of Tuesday.

The TTF gas prices in the spot market, after registering a value of €8.95/MWh last weekend, the first days of this week rose, taking values above €9/MWh. The highest index price of the week, of €9.39/MWh, was reached on Wednesday, March 4. However, today there was a change in trend and the price was €9.28/MWh.

After the declines registered in the last days of last week, the API 2 coal futures prices in the ICE market for the month of April 2020 began this week with an upward trend. On Wednesday, March 4, the maximum settlement price so far this week was registered, of $48.05/t.

As for the CO2 emission rights futures prices in the EEX market for the December 2020 reference contract, they began this week with decreases. On Tuesday, March 3, the lowest settlement price since February 11, of €23.38/t, was registered. But on Wednesday, March 4, the prices recovered 1.9% and the maximum settlement price so far this week, of €23.83/t, was reached. This behaviour was influenced by the results of the auction of emission rights made by the United Kingdom.