AleaSoft Energy Forecasting, September 28, 2022. In the fourth week of September and the first days of the last week of the month, most European electricity markets continued the trend of price decreases registered during the month. The recovery of the renewable energy production joined the drops in gas prices, one of the fundamental causes of these declines. In the Iberian market, prices below €1.50/MWh were registered during some hours of September 25, something that did not happen since May 15.

In the week of September 19, prices of most European electricity markets analysed at AleaSoft Energy Forecasting decreased compared to the previous week, although there were also significant increases in some markets. In the case of the Nord Pool market of the Nordic countries, the rise in prices reached 44%, while in the EPEX SPOT market of Germany, Belgium and the Netherlands the increases were 8.8%, 9.2% and 15%, respectively. Regarding price drops, the largest was that of the N2EX market of the United Kingdom, of 15%. In the rest of the markets, price decreases were between 9.2% of the IPEX market of Italy and 1.7% of the MIBEL market of Portugal.

In the fourth week of September, the highest average, of €384.98/MWh, was that of the Italian market. On the other hand, the lowest weekly averages were those of the markets of Spain and Portugal, of €137.42/MWh and €137.92/MWh respectively, in which a cap on gas prices is currently in operation, followed by that of the Nordic market, of €202.72/MWh. In the rest of the markets, prices were between €282.71/MWh of the British market and €358.36/MWh of the French market.

Despite the fact that the MIBEL market prices were the lowest due to the application of the gas price cap in this market, part of the consumers must pay a higher price as compensation for this limitation in gas prices. In the week of September 19, the average of this price decreased to €222.16/MWh in the Spanish market, a value 13% lower than that of the previous week.

Regarding hourly prices, in the period between Monday, September 19, and Wednesday, September 28, the lowest prices were registered on Sunday, September 25, in the Iberian market. That day, influenced by the high solar and wind renewable energy production, and the low demand of a Sunday of autumn with milder temperatures, prices below €1.50/MWh were registered. From 11:00 to 12:00, a price of €1.44/MWh was reached in both the Spanish and Portuguese markets. In the Spanish market, this price was repeated from 17:00 to 18:00. But in the time period from 15:00 to 17:00, the price in Spain was even lower, of €1.29/MWh. In both markets, these were the lowest prices since Sunday, May 15. On the other hand, the highest price, of €680.00/MWh, was reached on September 27, from 9:00 to 10:00, in the French market. This price was the highest in this market since September 1.

During the week of September 19, the 10% drop in the weekly average gas price compared to the previous week favoured the decrease in prices in most analysed electricity markets, despite the general decrease in wind energy production. The recovery of the production with this renewable technology allowed the downward trend in prices to generalise at the beginning of the week of September 26.

The AleaSoft Energy Forecasting’s price forecasting indicates that in the week of September 26 European electricity markets prices might decrease influenced by the general increase in wind energy production. However, the gas leaks in the Nord Stream I and II gas pipelines, related to a possible sabotage, detected on September 27 caused the increase in gas prices. This will exert its upward influence on prices in the coming days. 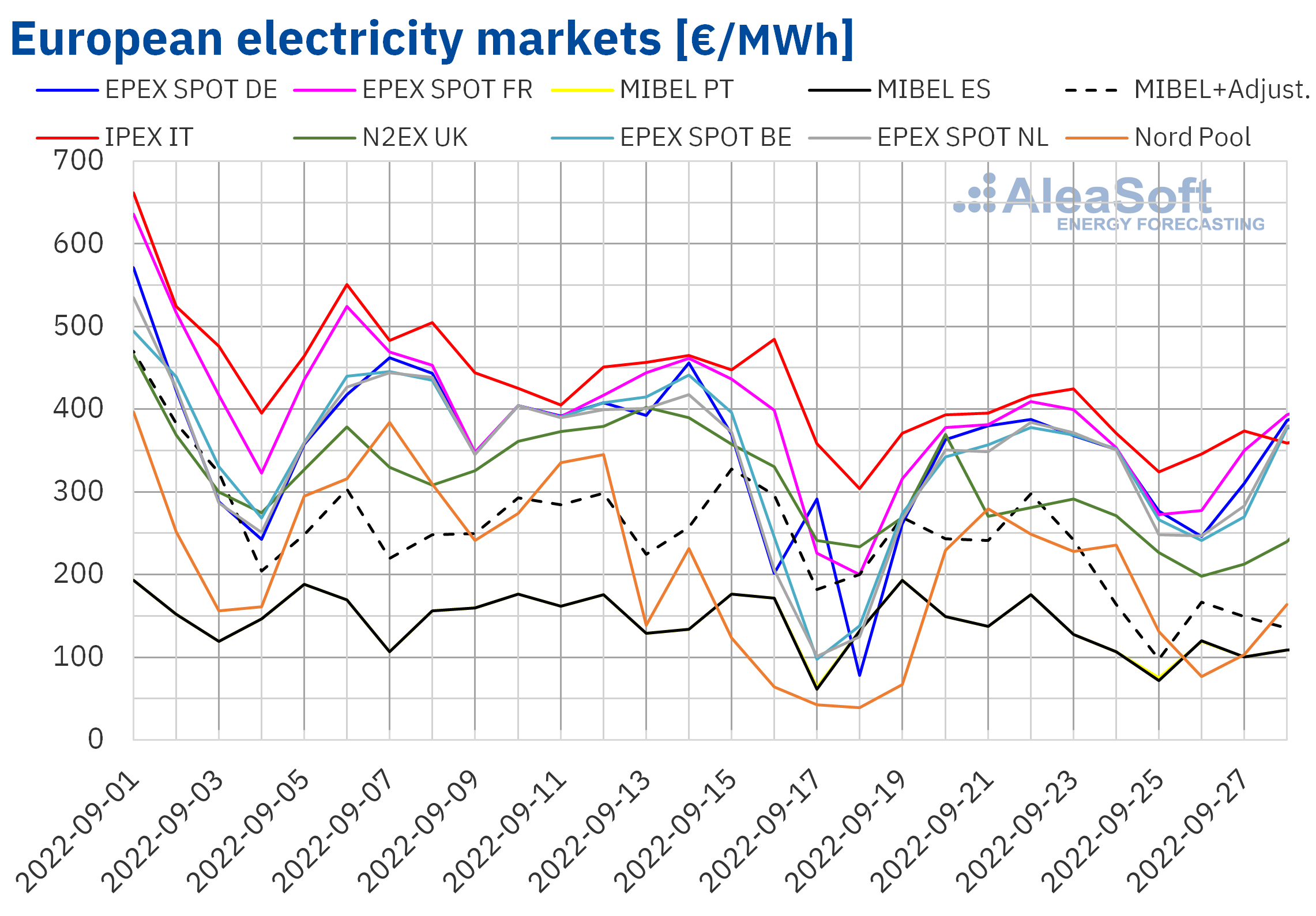 At the beginning of the fourth quarter of 2022, at AleaSoft Energy Forecasting and AleaGreen the long‑term price curves forecasting reports for all European electricity markets will be updated. One of the distinctive features of these reports is the hourly forecasting for the entire forecast horizon, which covers up to 30 years, something that is essential for portfolio valuation and audits. A personalised special promotion of these reports is currently being offered for some European markets.