AleaSoft, August 27, 2021. The electricity market of Portugal, coupled with more than 95% of the hours to the Spanish market, followed the same upward price trend as the rest of the European markets during the first half of the year. It should be noted that during this period the electricity demand recovered by 22% compared to the first half of 2020, when it was affected by the restrictions due to the COVID 19 pandemic and, also, that 68% of the production was from renewable energies.

In the MIBEL market of Portugal, the prices during the first half of 2021 had a mostly increasing behaviour. Except for the month of February, when prices fell to a monthly value of €28.19/MWh, 54% lower than the previous month’s price, and which subsequently began to recover to almost quadruple their value. In June an average price of €83.29/MWh was reached, 195% higher than the February’s average and the highest to that date since 2007.

During the first half of the year, the hourly prices of the Portuguese market converged with those of the MIBEL market of Spain 96% of the hours. 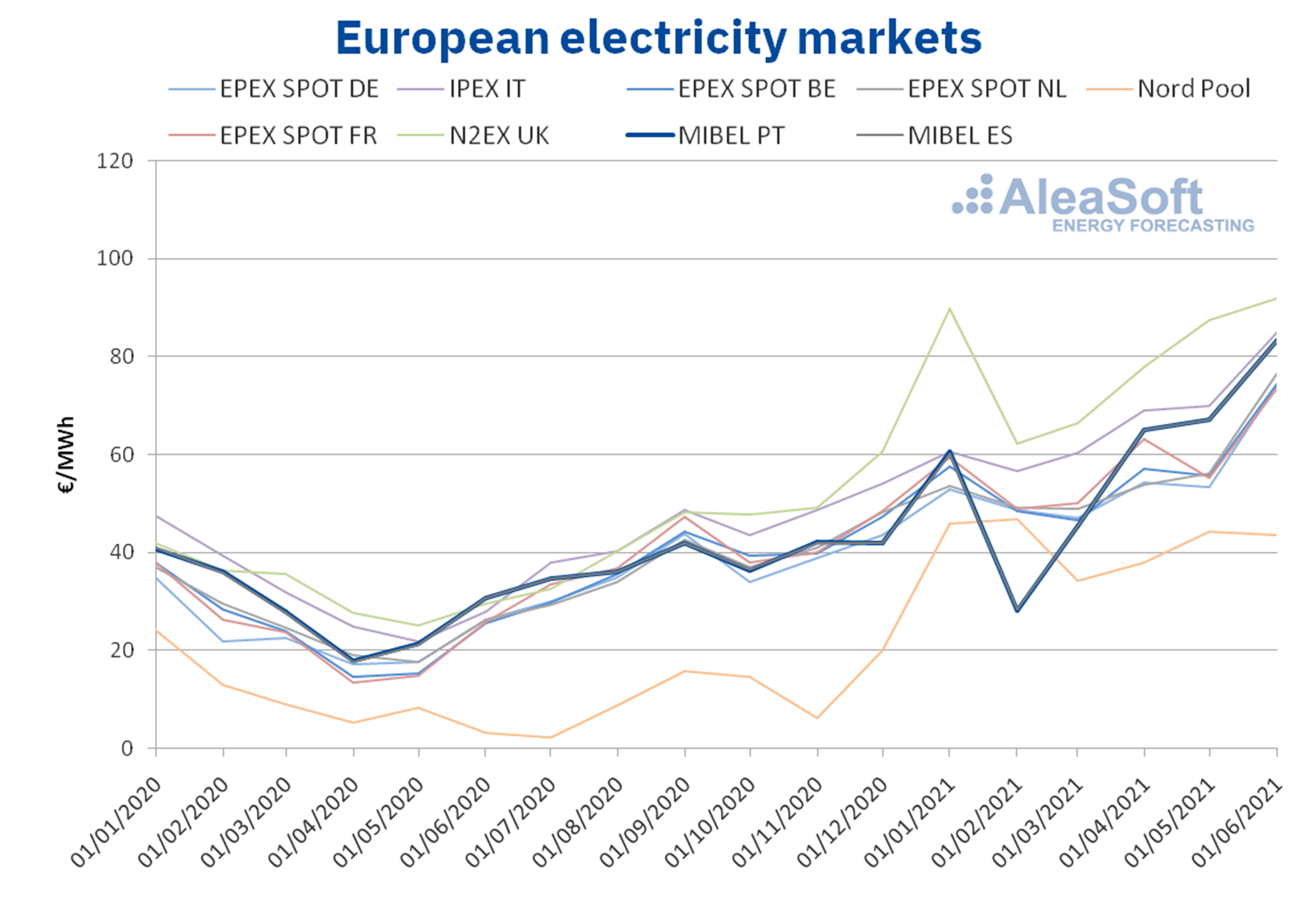 The maximum daily price between January 1 and June 30, 2021, was €94.99/MWh reached on January 8, the highest from July 1, 2007 until the end of the first half of 2021. As in the rest of the European electricity markets, the increase in prices in the Portuguese electricity market since the second quarter of the year was mainly due to high gas and CO2 emission rights prices. 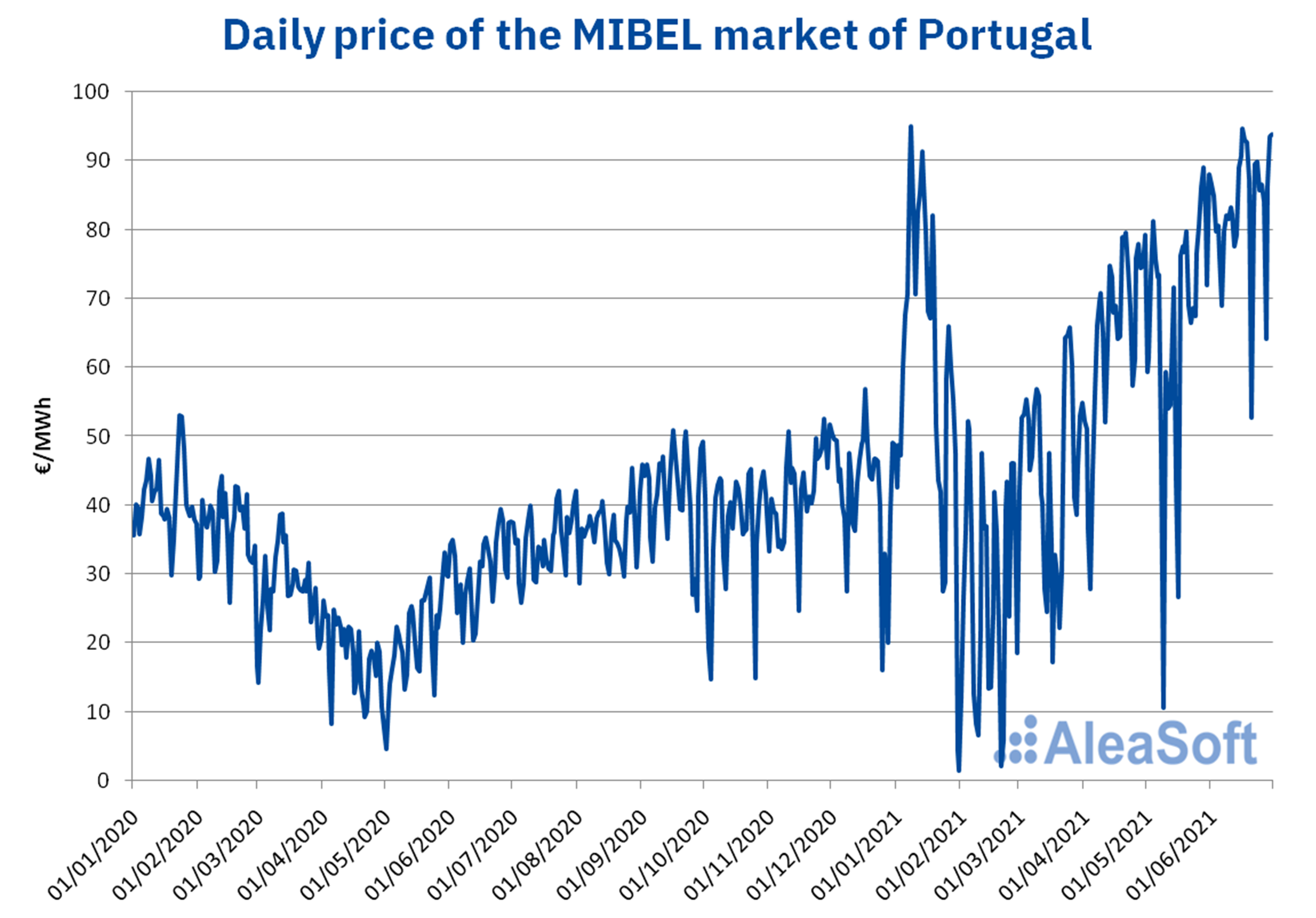 On the other hand, there are the more extreme temperatures that occurred during the winter of 2021. The storm Filomena that crossed the Iberian Peninsula during the month of January left an average temperature in that month 1.7 °C lower than that registered in the same month of 2020, with an increase in demand of 2.8%. 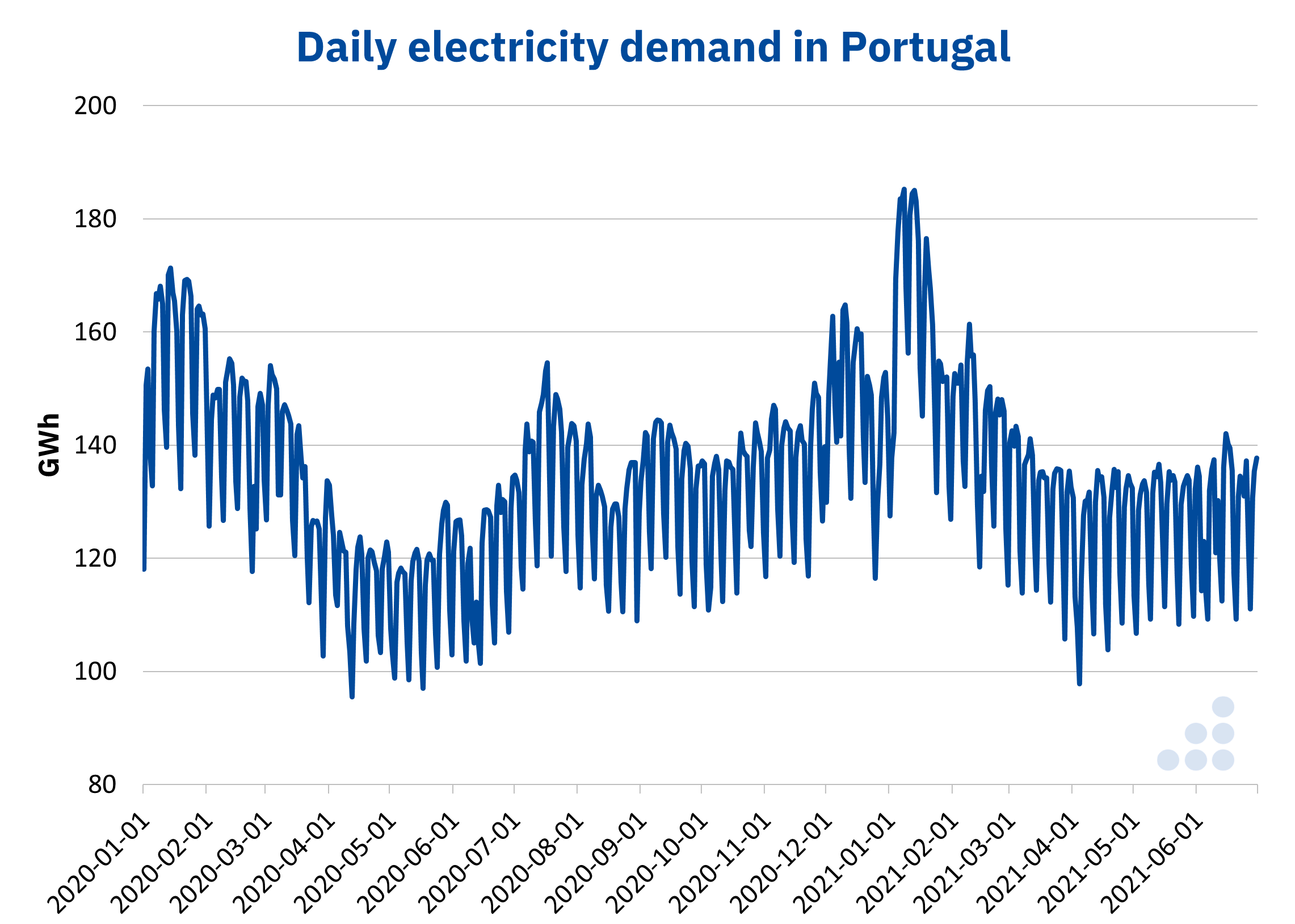 Source: Prepared by AleaSoft using data from REN and ENTSO-e.

The wind energy production was positioned in the second place in the share within the mix, with 6472 GWh generated in the first six months of 2021, 12% more than in the first half of the previous year, and which represented 26% of all the production. 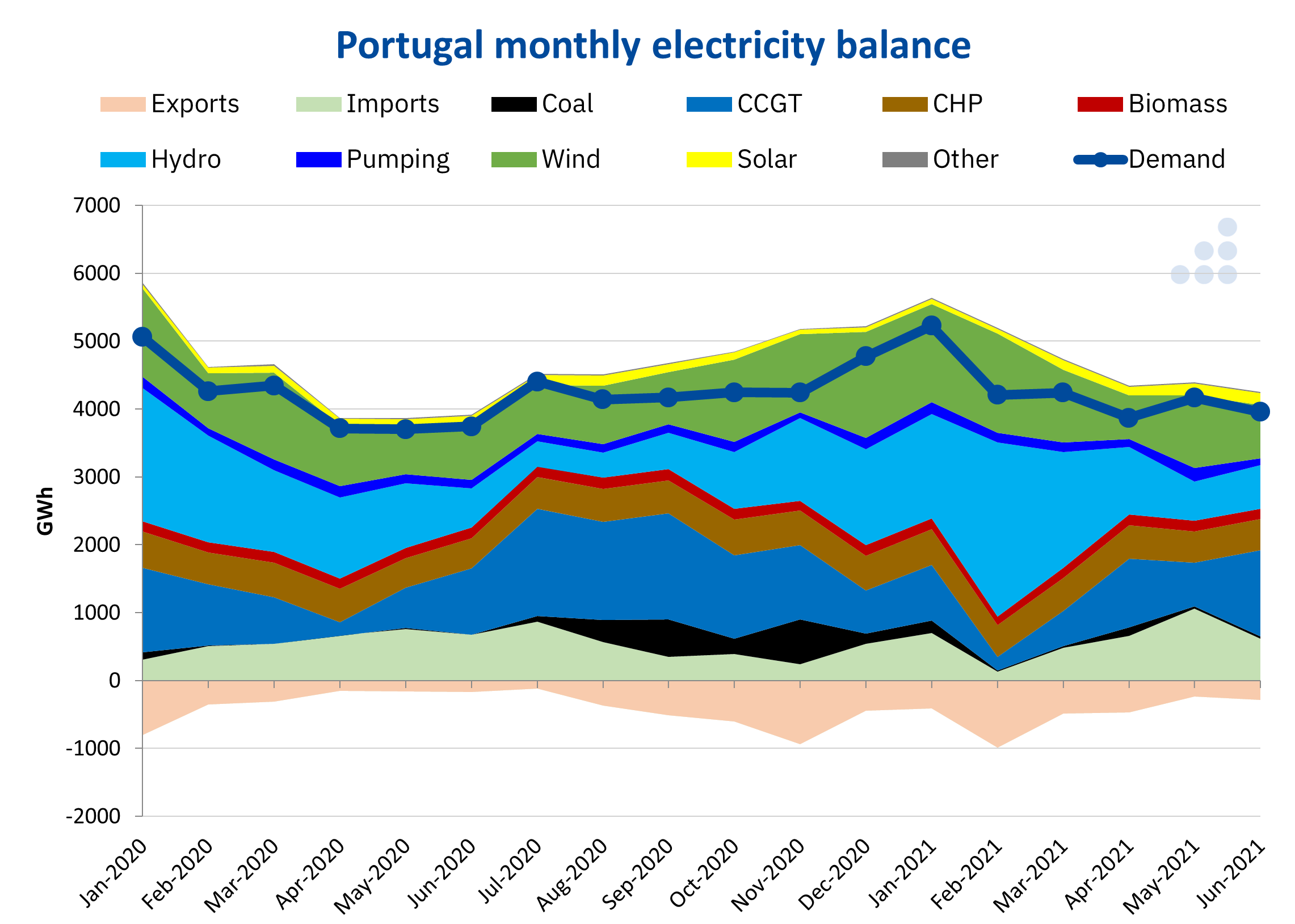 Regarding the generation with fossil fuels, in the first half of 2021, the production of the combined cycle gas turbines was at the top with 4464 GWh generated and, with a share of 18%, it was the third technology in the generation mix of Portugal. This represented a 3.2% drop in combined cycle gas turbines energy production compared to the first half of 2020 and a 41% drop compared to the second half.

The production with coal was quite marginal with 421 GWh and 1.7%, practically in the last place in the mix. Even so, the coal energy production was more than triple that of the first half of 2020, although compared to the second half of that same year, the production was 80% lower. These very different values of variation in the production of the thermal power plants are due to the fact that coal is already a very marginal fuel in Portugal. 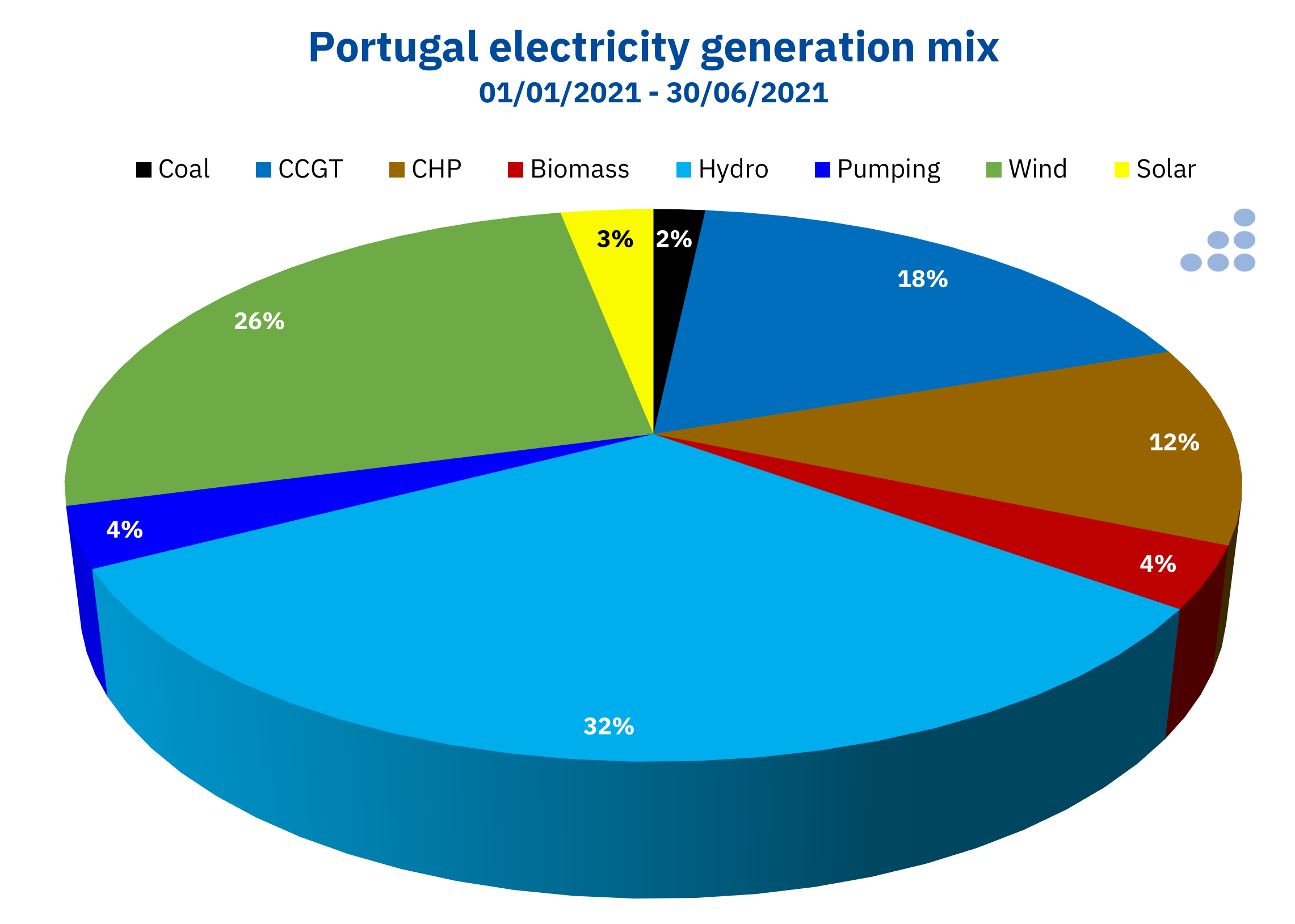 Like the electricity futures for Spain, the futures for Portugal in the OMIP market had a very aggressive upward trend during the first half of 2021. The futures for the year 2022, on January 4, stood at €48.08/MWh. On the last market day of June, they settled at €73.19/MWh, a 52% rise in just six months.

This upward rally, like the rise in spot market prices, was driven by the rise in gas and CO2 emission rights prices during these months. 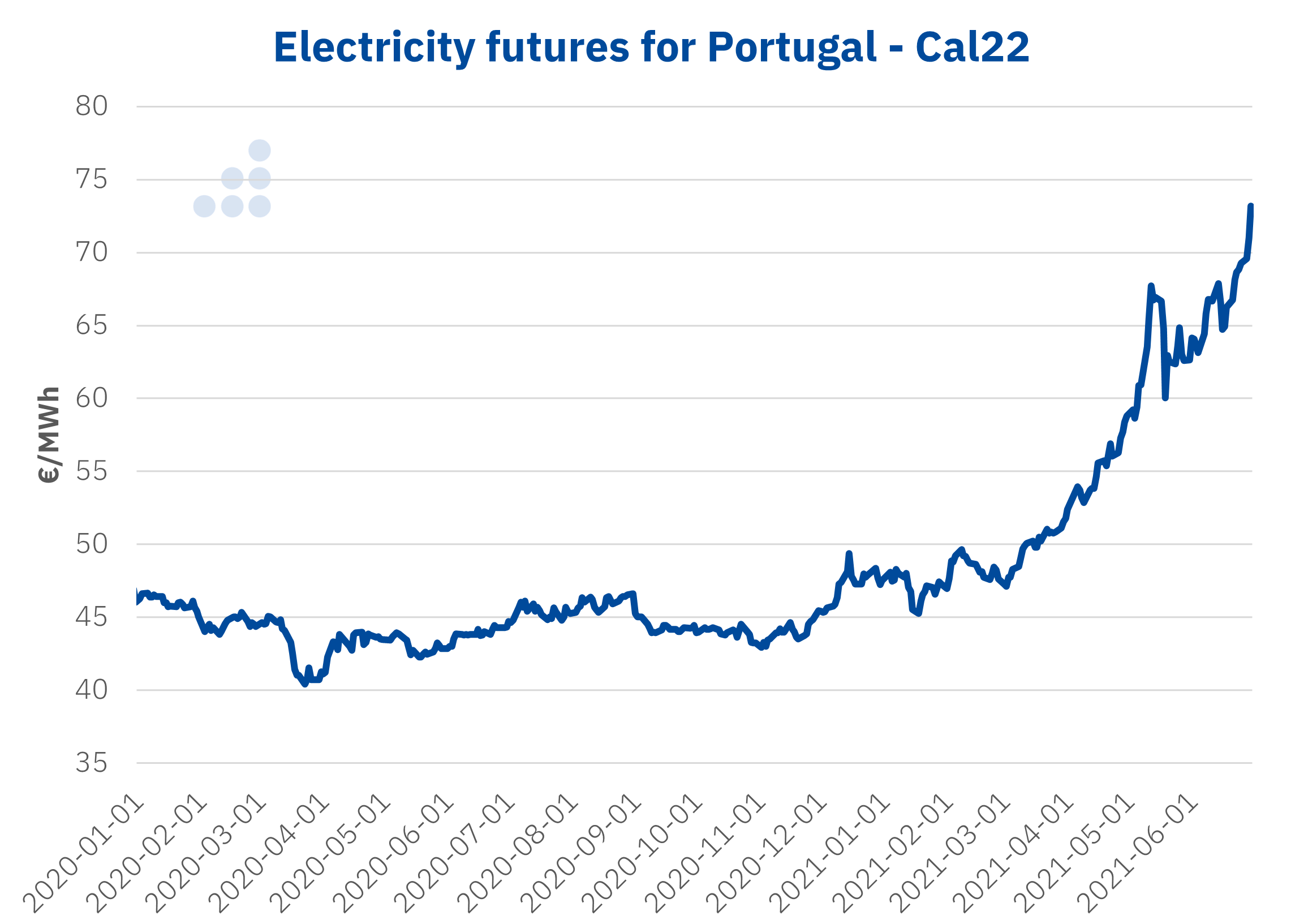 During the first six months of 2021, the balance of the electricity exchanges with Spain placed Portugal as a net importer, with the exception of February. This situation in February was due to the lowest prices on the continent that occurred in the Iberian electricity market, so both Portugal and Spain exported a lot of electricity to the rest of the continent through France. 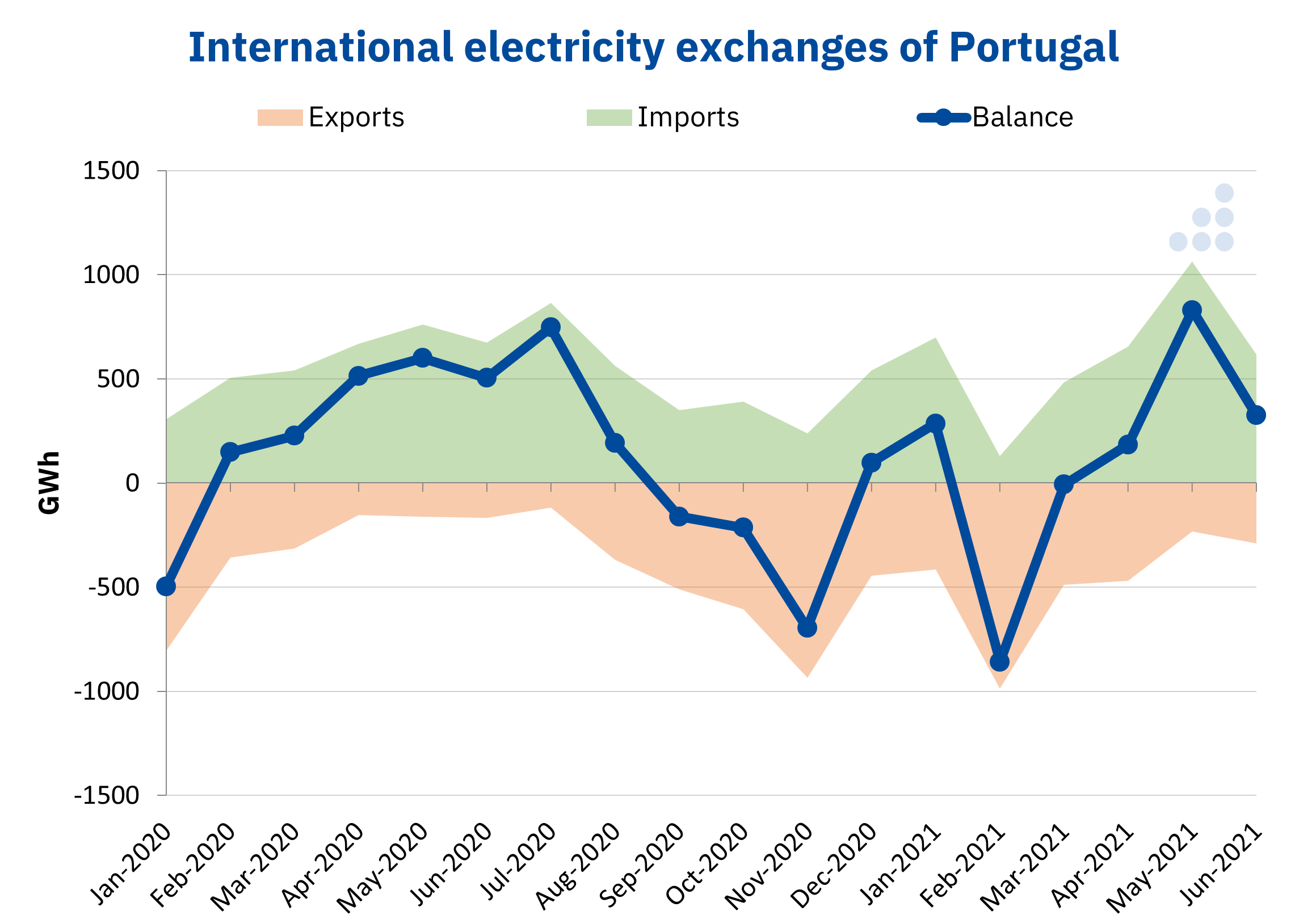 AleaSoft’s analysis on the prospects for the Iberian energy markets

The exceptional situation of the Iberian electricity market, and of all European markets, with very high prices, creates great uncertainty for producers and, above all, for consumers. To understand and have a long‑term vision of the energy markets, it is essential to have markets prices forecasts at all horizons. At AleaSoft, a special promotion of long‑term forecasting reports is in force for most European markets, including the Iberian market.

Additionally, for agents that operate in the spot and futures markets, producers, consumers or traders, AleaSoft organised a workshop to show the importance and usefulness of short‑term price forecasting when operating in the markets.

Also, within the framework of AleaSoft‘s informative activities, on October 7, a new webinar will be held with the participation of speakers from Deloitte where the evolution of the energy markets during the last twelve months will be analysed, in addition to addressing central issues for professionals of the energy sector such as the renewable energy projects financing and the importance of forecasting in audits and portfolio valuation.