AleaSoft, May 10, 2021. During the first week of May, high prices were reached in the European electricity markets, following the trend caused by the increase in CO2 and gas prices in recent weeks. However, the high renewable energy production caused a significant drop in prices during the weekend, with negative values in a few hours in several markets. The electricity futures increased and records were set again in the CO2, gas and Brent markets.

For the week of May 10, the AleaSoft‘s solar energy production forecasting indicates that it will decrease in the markets of Spain, Germany and Italy compared to the previous week. 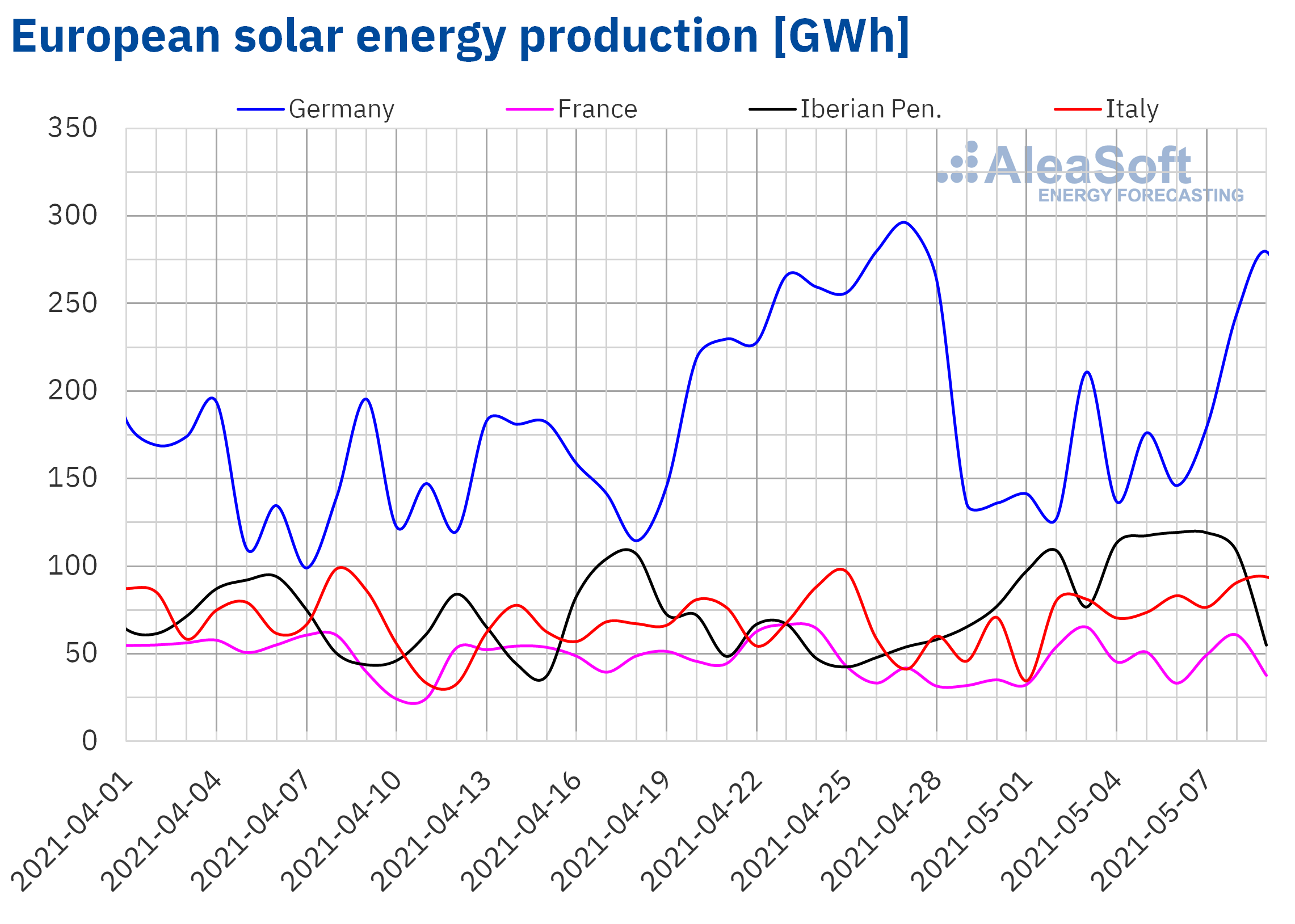 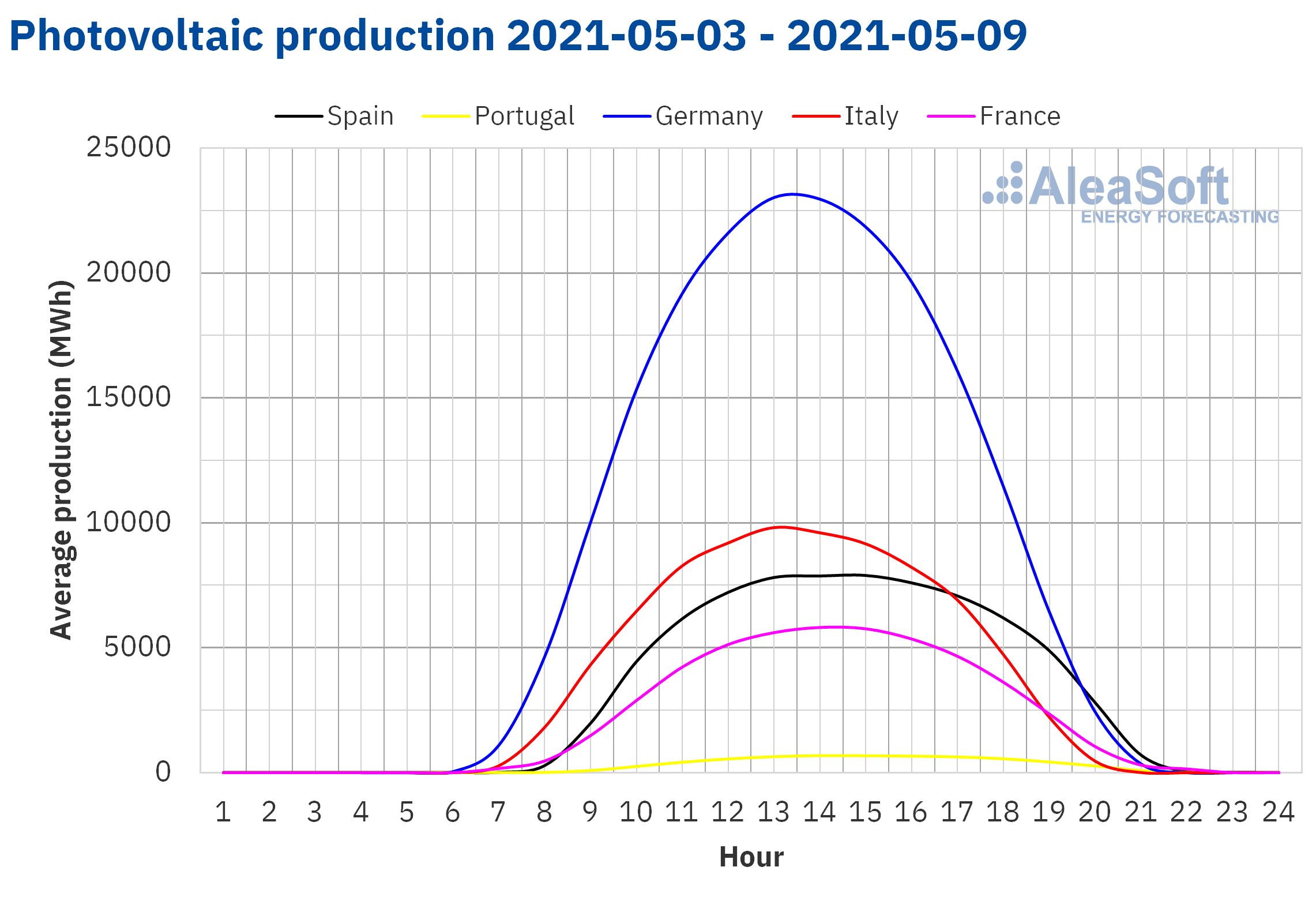 For the second week of May, the AleaSoft‘s wind energy production forecasting indicates that it will be lower than that registered the previous week in the markets of France and Germany. On the contrary, it is expected to continue increasing in the markets of Spain, Portugal and Italy. 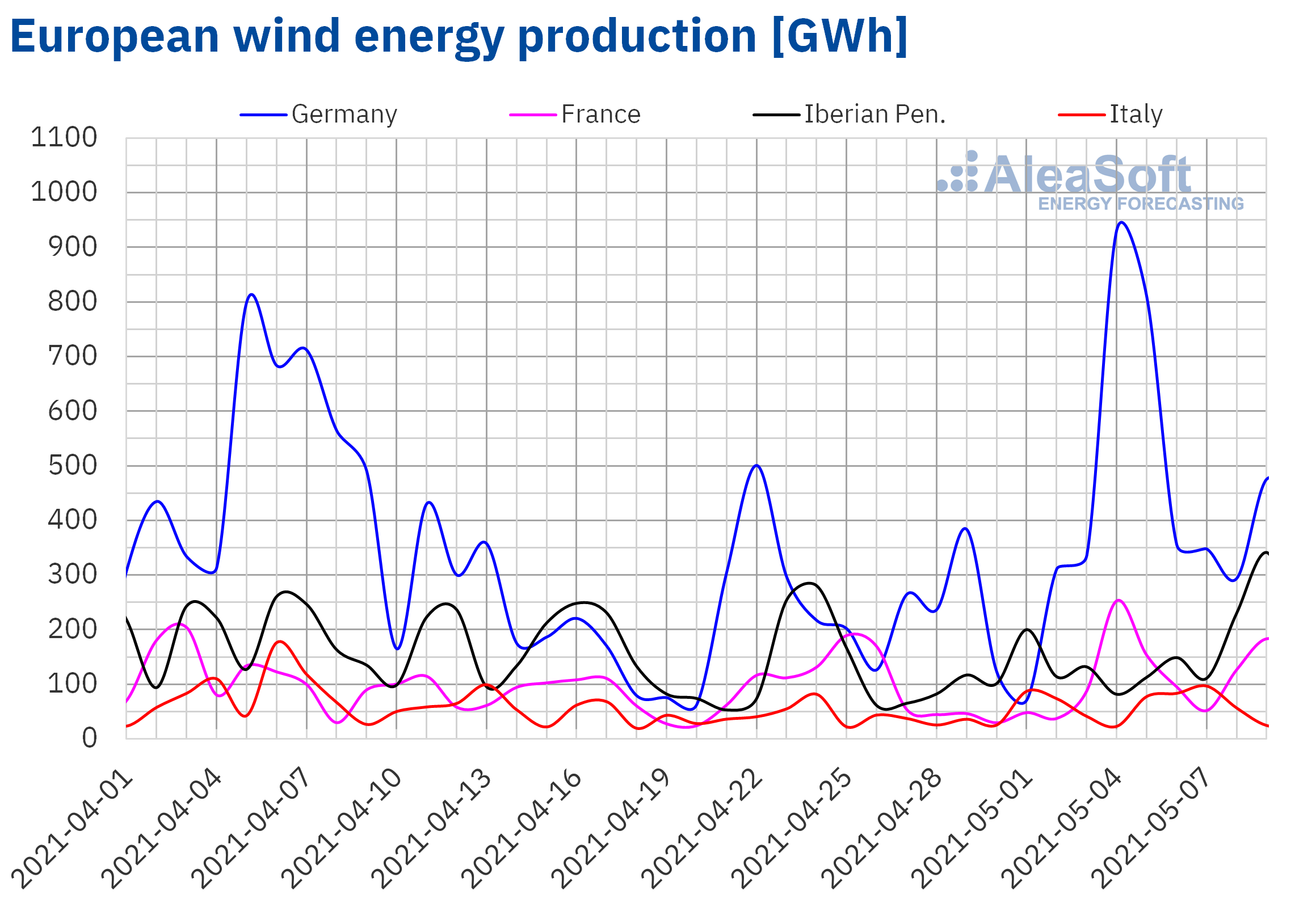 The electricity demand had a heterogeneous behaviour in the European electricity markets during the week of May 3 compared to the previous week. In Germany it increased by 3.2% and in Italy and Belgium the increases were close to 2%. In the case of Great Britain, the demand fell by 2.9%. On the other hand, in the markets of France, Portugal and Spain there was little variation with respect to the values registered during the previous week.

For the week of May 10, the demand is expected to decrease in Germany, France and Belgium. On the other hand, increases are expected in the markets of Spain, Portugal and Italy. 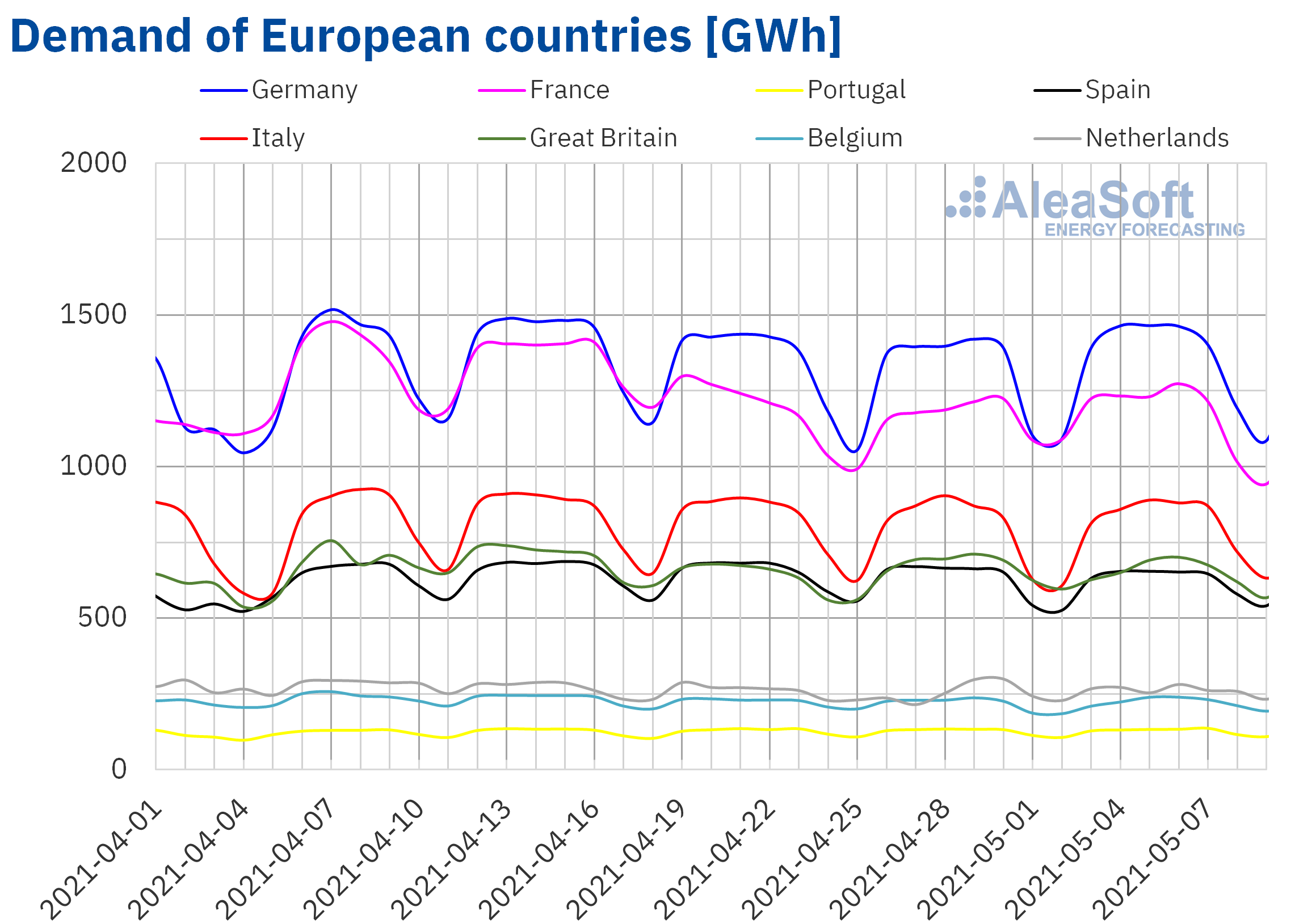 The week of May 3, the average prices of almost all the European electricity markets analysed at AleaSoft decreased compared to those of the previous week. The exceptions were the N2EX market of the United Kingdom and the IPEX market of Italy, with increases of 1.5% and 6.0% respectively. On the other hand, the largest drop in prices, of 24%, was that of the EPEX SPOT market of Germany. On the contrary, the lowest price decrease, of 3.8%, occurred in the Nord Pool market of the Nordic countries. In the rest of the markets, the price drops were between 14% of the MIBEL market of Spain and Portugal and 19% of the EPEX SPOT market of Belgium. The prices remained high for much of the week, continuing the trend seen in the markets since April, with daily values ​​that exceeded the maximum of the previous week in most markets. However, over the weekend, the prices fell favouring the decline in prices on a weekly basis.

On the other hand, during the weekend the decrease in demand combined with the increase in renewable energy production allowed negative hourly prices to be registered in the markets of Germany, Belgium, France and the Netherlands. In the case of the MIBEL market, the prices also touched €0/MWh for several hours, reaching a price of €0.01/MWh at the hours 16 and 17 of Sunday, May 9. This price was the lowest registered in the Spanish market since March 2014. 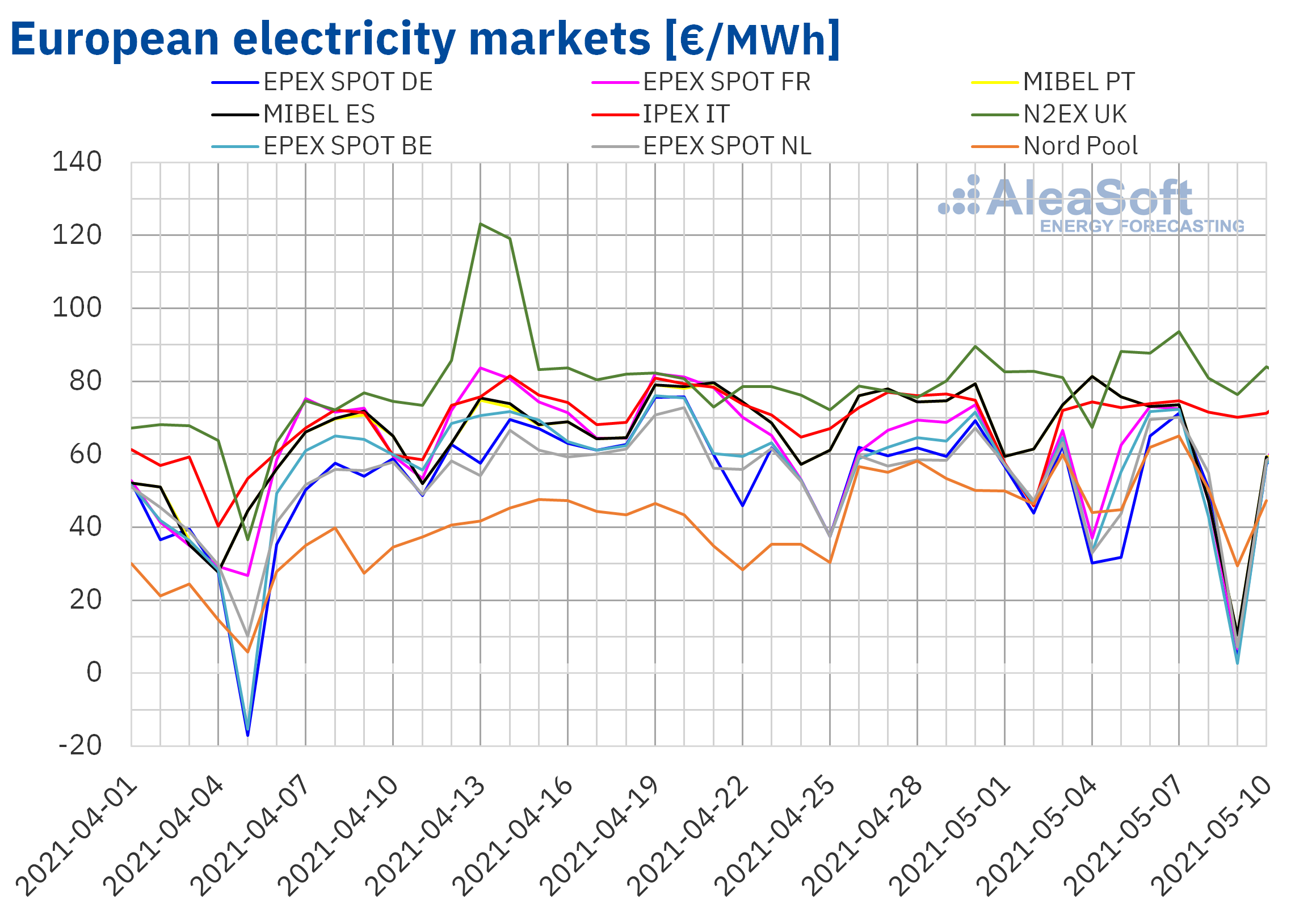 During the first week of May, the generalised increase in wind energy production, which was especially important in countries such as Germany and France, as well as the increase in solar energy production in most markets, favoured the decrease in prices in the Europeans markets.

The AleaSoft‘s price forecasting indicates that the week of May 10, the prices will recover in the EPEX SPOT market, influenced by the decrease in wind energy production in countries such as Germany and France. On the other hand, the wind energy production is expected to increase in the Iberian Peninsula and Italy, favouring the decrease in prices in the MIBEL and IPEX markets.

During the first week of May, the European electricity futures markets analysed at AleaSoft registered increases in prices of the product for the next quarter Q3‑21. The ICE market of the Nordic countries was the one with the highest increase, with a 12% difference compared to the settlement of the last week of April. It was closely followed by the NASDAQ market also of the Nordic countries, whose rise was 0.5 percentage points below the previous one. The EEX market of the United Kingdom was the one with the lowest increase, with 1.9%.

Regarding the electricity futures prices for the next calendar year 2022, increases were also registered in all markets. Once again, the Nordic region is leading the gains, with more than 8% in the ICE and NASDAQ markets. Meanwhile, in the rest of the markets the increases were between 3.1% of the ICE market of the United Kingdom and 4.6% of the ICE market of Belgium.

The Brent oil futures prices for the month of July 2021 in the ICE market began the first week of May with increases. On Wednesday, May 5, a settlement price of $68.96/bbl was reached. This price was 3.3% higher than that of the same day of the previous week and the highest in the last two years. After registering a 1.3% decline on Thursday, the settlement price of Friday, May 7, was $68.28/bbl, 2.3% higher than that of the previous Friday.

The expectation of a progressive recovery in demand in the Northern Hemisphere as the mobility restrictions adopted to fight the COVID‑19 decrease favoured the increase in Brent oil futures prices. However, the pandemic situation continues to be very serious in India. This will also have its effects on the demand, as India is the third country in terms of oil consumption in the world.

As for the TTF gas futures prices in the ICE market for the month of June 2021, the first week of May they were higher than those of the previous week. On Thursday, May 6, they reached a settlement price of €24.33/MWh, 8.2% higher than that of the previous Thursday and the highest in the last two years. But on Friday the prices fell slightly to €23.94/MWh. The increase in temperatures favoured this drop in gas prices. However, the reserve levels are low and in the session of Monday, May 10, the prices were already above €24.80/MWh most of the time.

Regarding the CO2 emission rights futures in the EEX market for the reference contract of December 2021, the first week of May they continued to register price increases. As a result, on Friday, May 7, a new record was reached with a settlement price of €50.44/t. 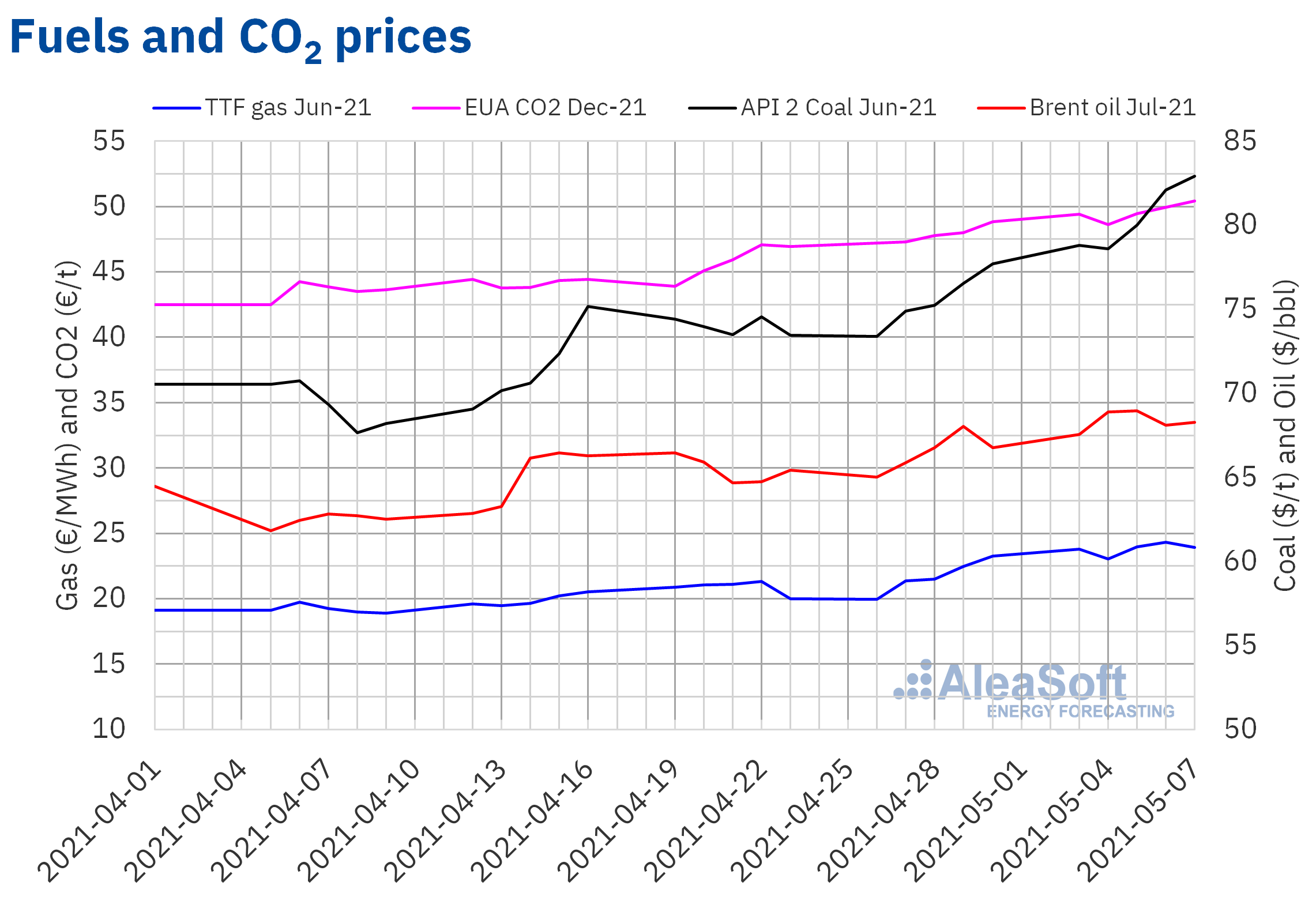 Next Thursday, May 13, the AleaSoft experts Oriol Saltó i Bauzà, Manager of Data Analysis and Modelling, Antonio Delgado Rigal, CEO and Alejandro Delgado, CTO, will be the speakers of the monthly webinar carried out by the company, in which various topics of interest of the European energy markets will be analysed. One of the current topics is the high prices seen in the markets in recent weeks and the strategies that the large consumers and electro‑intensives and the renewable energy developers can carry out to be prepared for these periods. At AleaSoft it has always been insisted that the markets are in equilibrium and that these periods must be taken as exceptional situations caused by the conjugation of temporary factors. In fact, the decline in prices over the weekend is an example that, to understand the dynamics of the markets, it is necessary to focus the analysis on the medium and long term. Hence the importance of the price forecasts in these horizons, both for the risk management and to obtain financing to carry out the new renewable energy projects that are needed to meet the objectives of the NECP and of greenhouse gases emissions reduction.

PrevAnteriorBeyond alarming headlines, there is a coherency in the electricity markets prices
SiguienteIt is necessary to analyse the current situation in the energy markets with a long term visionNext
Menu
Facebook-f Twitter Linkedin Instagram