AleaSoft, August 20, 2020. The Spanish NECP aims for the installed wind energy capacity in 2030 to reach 50 GW, almost a third of the total capacity expected on that date, and for it to be the technology with the highest installed power. After some years of stagnation, since the last quarter of 2019 the installation of new wind energy power was reactivated, which allowed it to reach the aforementioned first position this July. Undoubtedly, this growth rate will allow us to achieve the established objective.

At the beginning of this year, 2020, the Spanish Wind Energy Association (AEE, for its acronym in Spanish) remarked that the wind energy exceeded 25 700 MW installed in 2019 in Spain. The latest data from Red Eléctrica de España (REE) place wind energy capacity at the end of 2019 at 25 847 MW at the national level and at 25 413 MW in Mainland Spain. Undoubtedly, the year 2019 can be described as spectacular for the wind energy, especially during the last quarter, taking into account that it was more than a lustrum of complete stagnation, even with some years with decreases in the wind energy installed capacity. 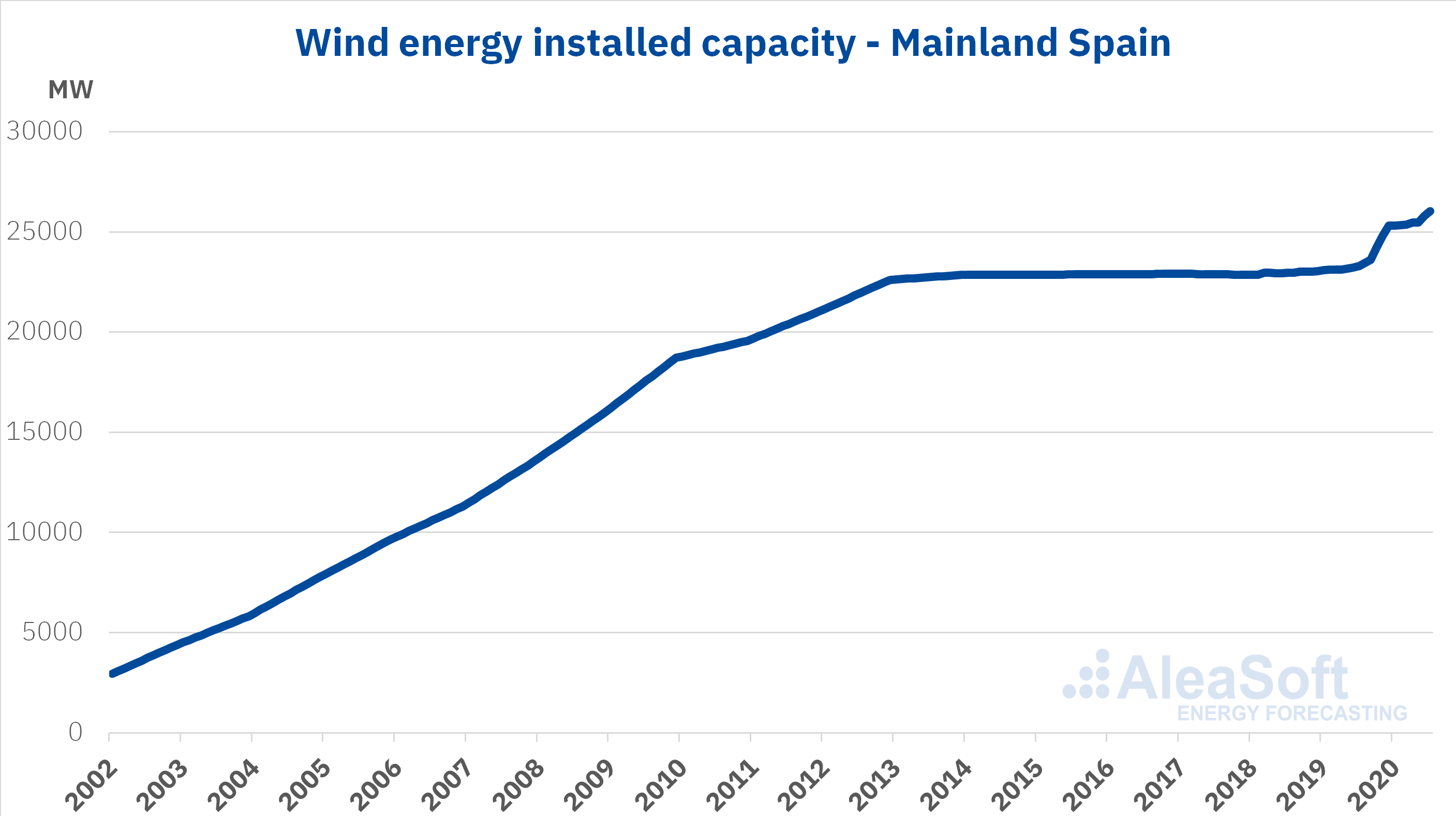 From October to December 2019, a streak of three consecutive months was chained with capacity growths above 2%, with a total increase of 1.7 GW in just three months. Extrapolating to 12 months, 7.1 GW/year, a rate that if maintained would amply allow the goal of the National Energy and Climate Plan (NECP) to be achieved, which places the wind energy in 2030 as the source of electricity generation with the most installed capacity nationwide, with 50 GW, almost a third of the total capacity expected in the Spanish electricity mix on that date, followed by the photovoltaic energy, with 39 GW.

Precisely in July 2020, the wind energy was ranked first in terms of installed capacity in Spain both at the national and peninsular level, thanks to the fact that 632 MW were installed between January and July, surpassing the combined gas cycles (CCGT), which now moved to the second place. The total installed capacity of the wind energy reached 26 284 MW at the national level and 26 045 MW in the peninsula.

The 50 GW of the NECP for the wind energy in 2030 also includes offshore wind energy. The NECP does not states specific objectives for the marine version of this technology, but it does recognise it as one of the most advanced technologies among which solid maturity has not yet been achieved. The Plan recognises that Spain has great potential for this technology, but that it still has to lower its costs and its environmental impact.

Worldwide, offshore wind energy is postulated as the main renewable energy technology to be promoted due to its high efficiency, which can double that of its terrestrial counterpart.

Regarding generation with wind energy, the greater variability presented by this technology, compared for example with photovoltaic, means that so far no production records have been registered in this year 2020. The peninsular monthly production record stands in March 2018 with 7676 GWh. 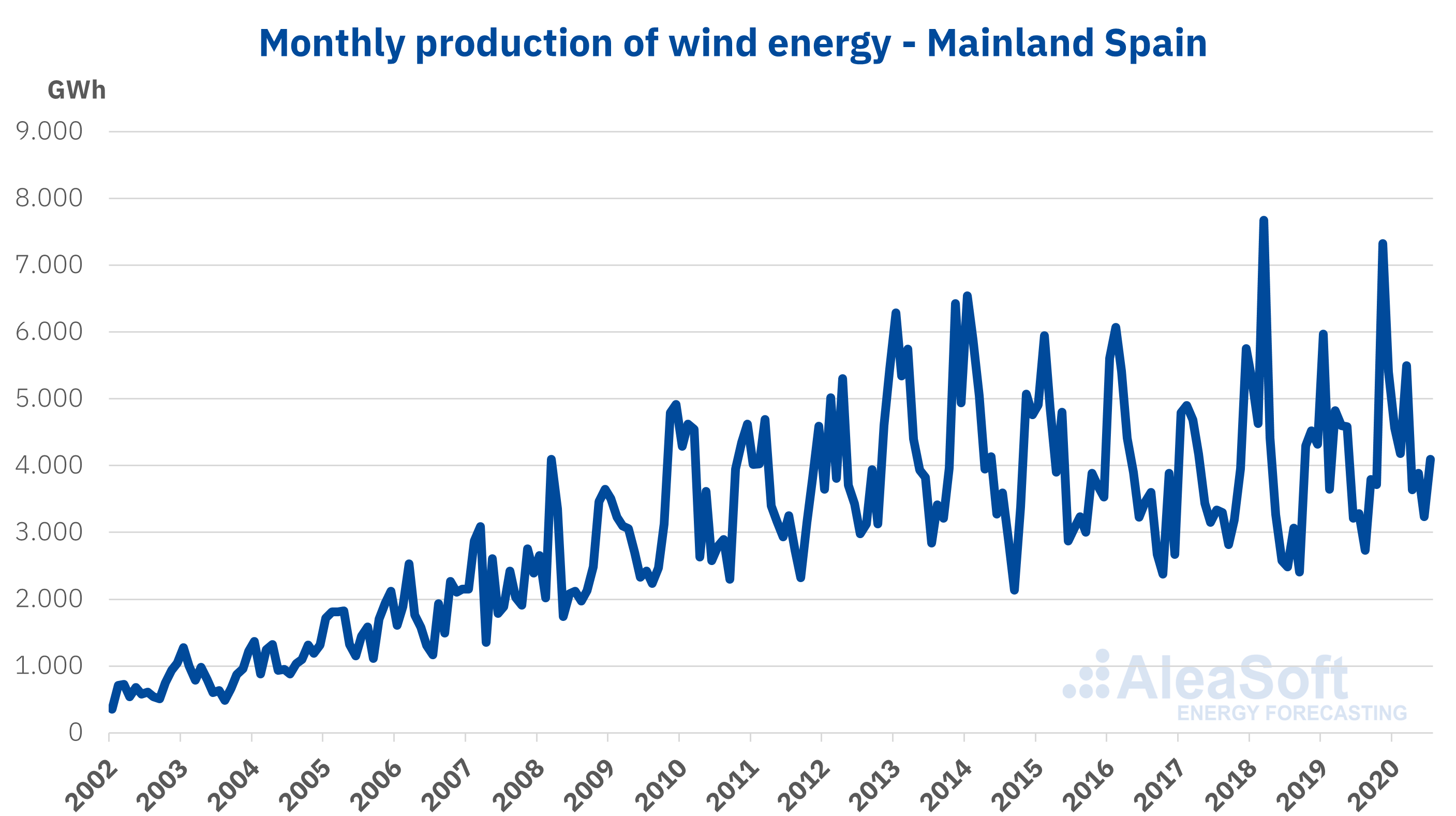 The evolution of the wind energy production in Spain in recent weeks, as well as the price and the rest of the variables of the Spanish market and the main European electricity markets, can be tracked in the observatories on the AleaSoft’s website. For a more in‑depth data analysis, with more granularity options and with all the historical data, AleaSoft is developing the Platform Plus that will soon be available in beta version for its clients.