AleaSoft, March 18, 2020. The news related to the coronavirus and the measures that have been adopted worldwide to stop its expansion are being the protagonists in recent days. These measures are expected to cause a slowdown in the economy, although, in a scenario that is changing every day, it is still difficult to predict their impact. At AleaSoft, the behaviour of the demand during the first fortnight of March in three of the affected European countries, Italy, Spain and France, was analysed.

Italy is the country of Europe where the spread of the coronavirus epidemic began earlier. Since March 8, several provinces have been in isolation, and two days later, the restrictions were extended to the entire country. This effect was reflected in the electricity demand of the first fortnight of March, which, after correcting the effect of labour, was 1.8% lower than that of the first fortnight of March 2019, even when the average temperatures this year were 0.5 °C colder.
Comparing last week’s electricity demand, when the restrictions began to apply, with the previous weeks, the effect of the measures to curb the coronavirus is clearly seen. On the other hand, as of Friday the 13th, the hourly demand profile changed and now between 9 am and 6 pm it is lower than on the same days of previous weeks and at the hour 20, which is the maximum demand hour of the day, it has been higher. 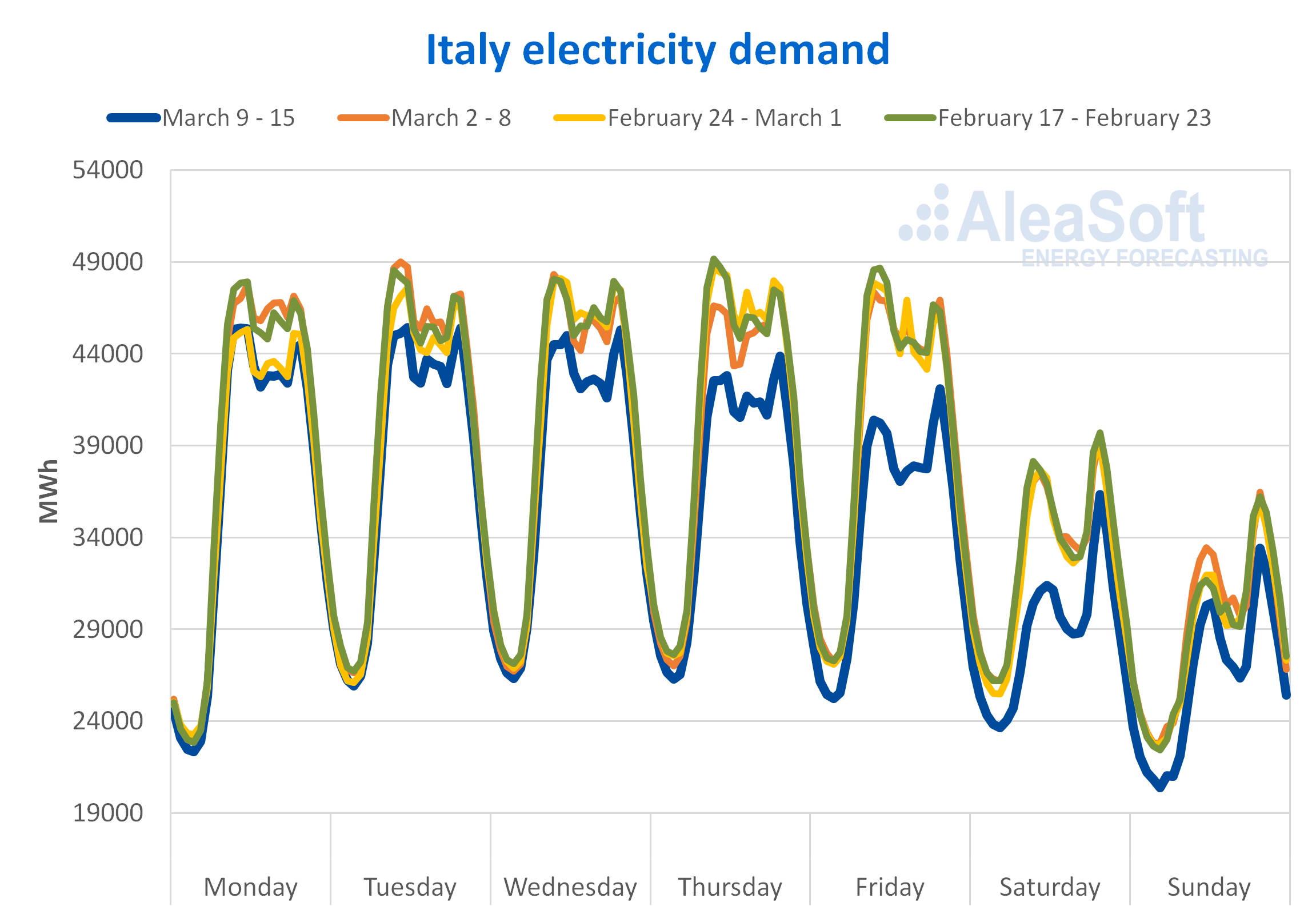 In Spain, the state of alert for the coronavirus was decreed on March 14, so its effect on the electricity demand will be more noticeable from the second half of this month. In some autonomous communities, such as Madrid, measures to curb the contagion began to be taken from the week of March 9 but, although according to REE in the demand of those regions the effect was noted, it is not appreciable in the volume of the fortnightly demand of the peninsula. However, as of Saturday, March 14, a decrease in hourly demand is observed when compared to the homogeneous days of previous weeks, which in some cases had even colder temperatures. On the other hand, on Sunday the 15th, a smaller difference between the height of the peaks at noon and at night was observed due to the increase in domestic consumption during lunchtime. 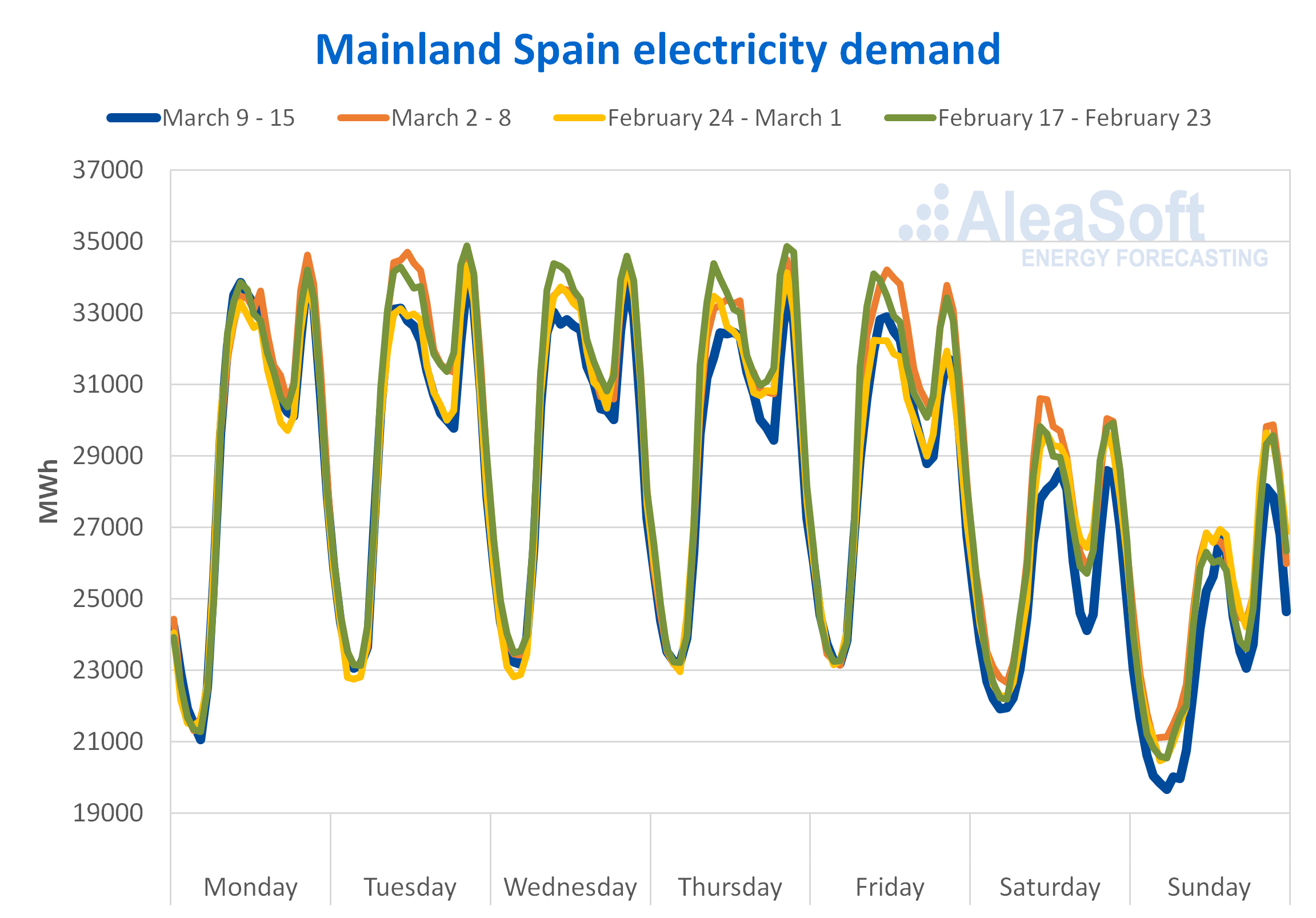 In the case of France, as of Monday, March 9, measures began to be taken such as the closing of schools in the most affected areas, but the effect of these measures on the national electricity demand is not appreciated. In fact, the electricity demand of France in the first fortnight of March was 4.1% higher than in the first fortnight of March of last year, once the effect of labour was corrected because the average temperatures of the first part of this month were almost 1 °C lower than those of the same period of last year. If the demand of the week of March 9 is compared with the three previous weeks, a notable decrease can be seen. However, although the measures taken to curb the coronavirus may have had some effect on the demand, the fundamental cause of this decrease is the increase in temperatures, since the electricity demand of France is very sensitive to variations in temperature. 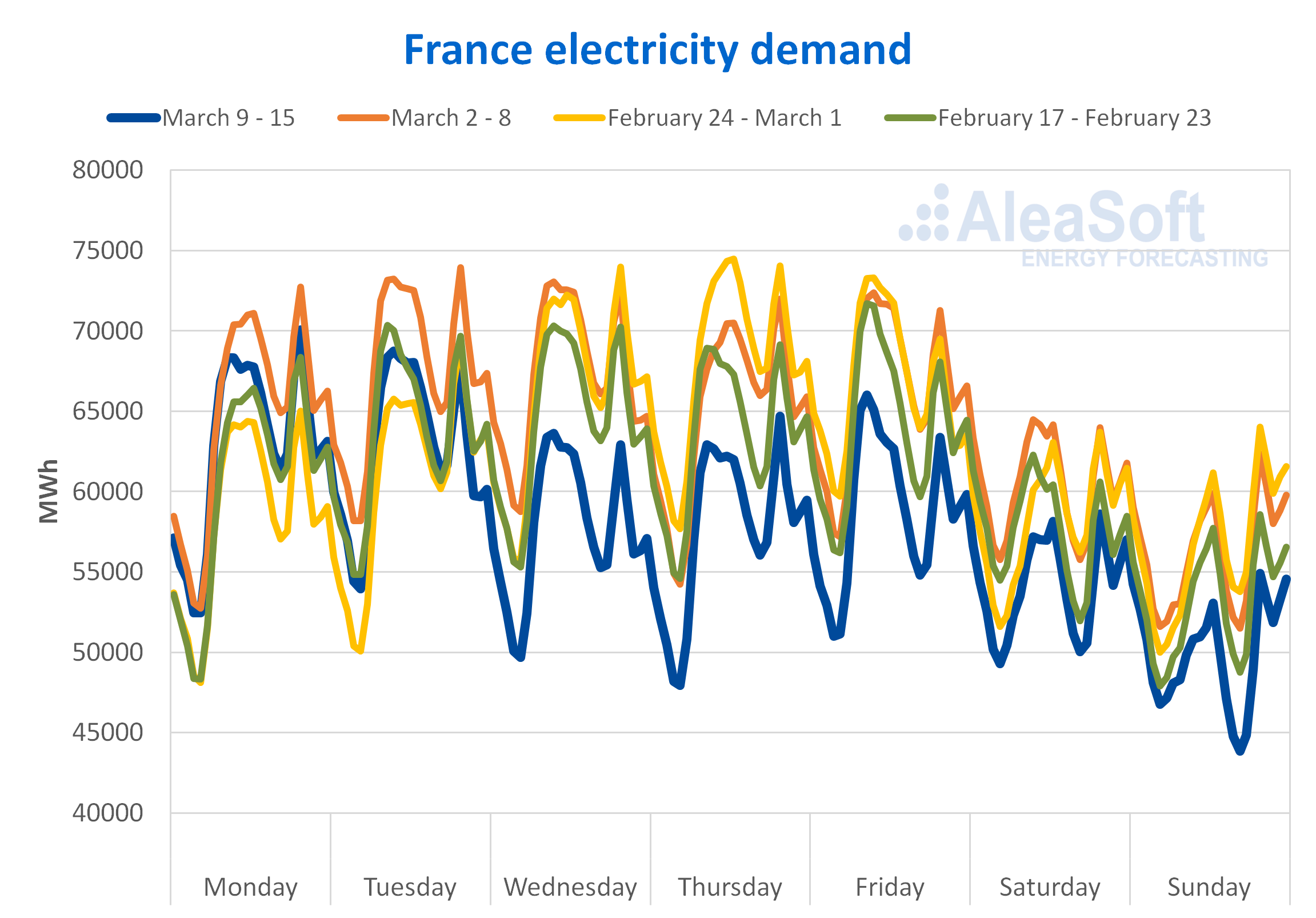 This Monday, March 16, the French president announced more restrictive measures to stop the pandemic, including limitations on mobility, closure of bars, restaurants, schools, etc. reason why it is expected that in the second half of March the effect on electricity demand will be more noticeable.

At AleaSoft, the models of forecasts of demand and of electricity markets prices in the short, medium and long term both in Spain and in the rest of Europe are updated daily. During this COVID 19 outbreak, the forecast reports that are made with the most recent data and with the most probable scenarios are being updated.