AleaSoft, September 8, 2020. After bottoming out in April and May, the energy markets face an uncertain recovery. Although the long‑term prospects indicate levels close to those before the crisis, in the medium term the possibility of outbreaks of COVID‑19 sows uncertainty. The renewable energy projects will also be affected. Although the investment appetite and the demand for connection points remain strong, the financing conditions could tighten.

It seems like a long time has passed since graphs like this one were shown in the webinars of the series “Influence of coronavirus on electricity demand and the European electricity markets”, where the demand forecasting plunged with no apparent bottom, and they froze the blood when thinking about how the economy would recover from a sinkhole of this calibre never before registered in any of the series that the neural networks of the AleaSoft’s models use. 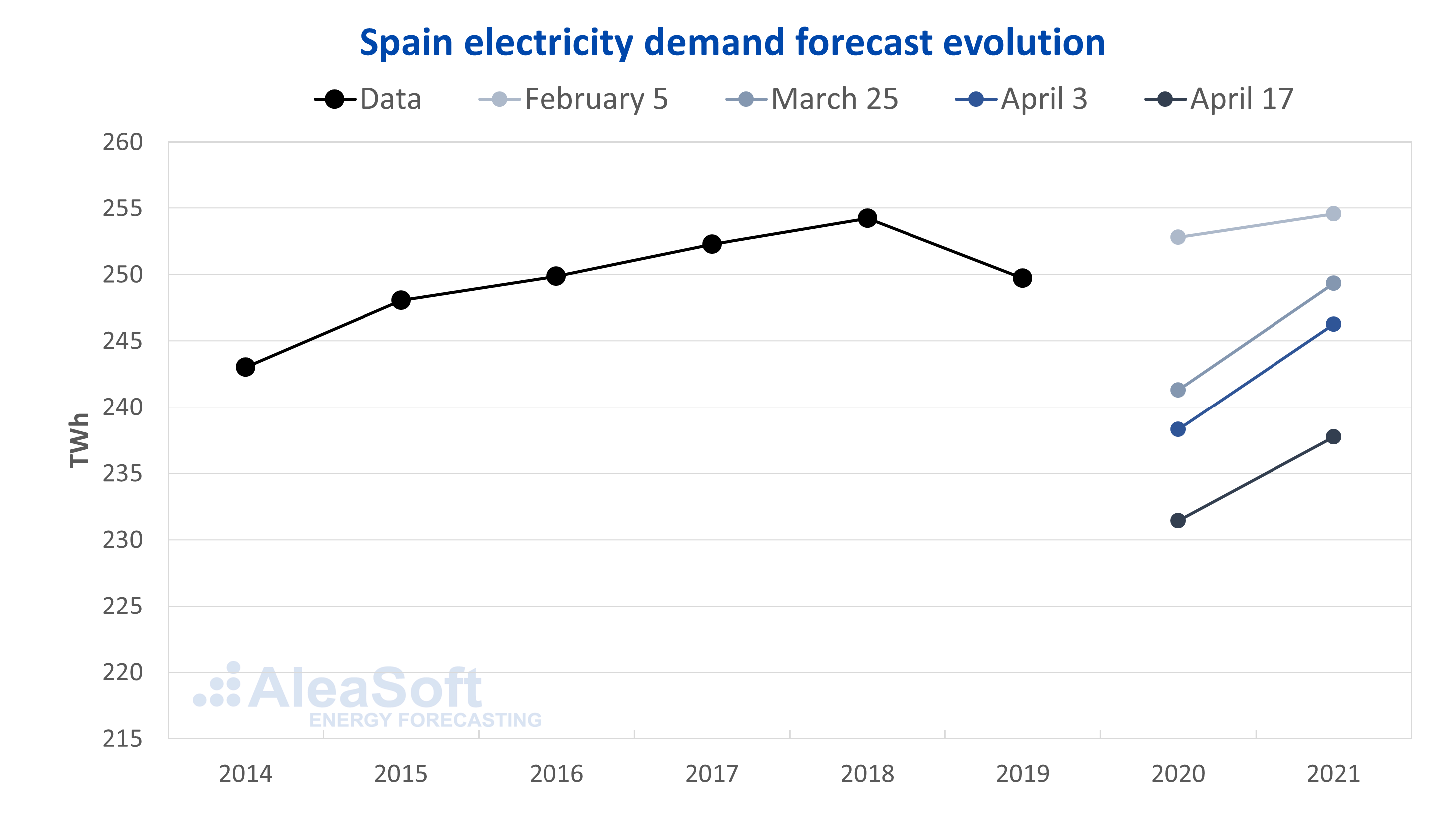 Between April and June, at AleaSoft this three‑part series of webinars was held where the impact that the economic crisis created by the COVID‑19 pandemic was having on the energy demand in the electricity markets of the main European countries and in the Brent oil, gas and CO2 emission rights markets was analysed.

As the webinars took place during the most critical months of the coronacrisis, they allowed monitoring the evolution of the energy markets and seeing how the prospects for the expected future recovery were also changing. From the first moments, when a rapid recovery in the “V” style was expected, where everything would return to normal as soon as the restrictions of the State of Alarm in Spain and the measures of confinement of the population in many of the European countries ended, to when some predicted that the electricity demand would never recover to pre‑crisis levels and that with the increase in renewable energy the prices would already stay below €30/MWh, or even €20/MWh, for the long term.

From AleaSoft, a scenario that turned out to be the most realistic was always showed: a recovery of the “wide U” type with important consequences in the short term and a clear impact on the energy markets in the medium term, understanding that the total recovery, or almost complete, could take years more than months.

In the long term, the models always showed forecasting in which the market balance remained with relatively few variations with respect to the pre‑crisis reports. For now, this continues to be the result of the long‑term models.

During the webinar series there was also a special focus on how this crisis was affecting the financing of renewable energy projects. On this, all the guest speakers largely agreed: the investment appetite in renewable energies remained, despite the complications resulting from the anti‑pandemic measures and a slight trend towards somewhat more conservative financing conditions. That is the message that the guest speakers from ENGIE, JLL (Jones Lang LaSalle), Banco Sabadell, Powertis and Triodos Bank left in the webinars.

But, the outlook already changed. The lowest point of the crisis already passed with the reopening of the non‑essential businesses and a progressive reactivation of all economic activity. Now there is the impact of all those measures that were taken and the uncertainty about whether the reopening of the schools will lead to new outbreaks of COVID‑19 and, in the worst case, to new measures of confinement and restriction of the economic activity.

Next series of webinars

Faced with this panorama of uncertainty, at AleaSoft a new series of webinars on “Energy markets in the recovery from the economic crisis” is being prepared, which currently consists of two parts, the first on September 17 and the second on October 29. This new series will once again analyse how the energy markets are evolving and the need for financing of the renewable energy projects, with an eye on the uncertainty of the medium and long‑term prospects.

Once again, there will be speakers from the most important companies in the energy sector in Europe, such as Deloitte, which will participate in October with two speakers, or as ENGIE and Banco Sabadell, which already participated in the first series of webinars.