AleaSoft, September 15, 2020. This global crisis caused by the coronavirus had a huge impact in all facets of the economy, and the energy markets were no exception. But beyond the damage already caused, many questions were raised about how the pandemic and the energy markets will evolve in the medium term and what consequences it will have in the long term.

The summer was not as calm as expected. When the countries were beginning to see the light at the end of the tunnel of the serious health crisis, towards the end of May, the hopes were pinned on summer. Once the strictly public health crisis was overcome, it seemed that the heat, the solar radiation, the humidity, the vacations and the life outdoors were going to greatly slow down the spread of the virus. It was known that the virus was not going to disappear completely, but a truce was expected that would allow the stressed health system to breathe a bit.

It was already known then that, without a vaccine, which was not expected to arrive before winter, the outbreaks of COVID‑19 were something that would have to be lived and dealt with in the fall. But in the midst of the depths of the crisis, autumn was far away, and the truce of summer was expected to allow the economy to pick up, even partially, and to be able to stop thinking about the pandemic, at least for a couple of months.

But it was not exactly like that. The outbreaks of coronavirus were happening in practically all European countries. In countries like Spain and Italy, the impact on industries such as tourism was enormous.

The European economies in the second quarter of 2020

The final and official data on the drop in gross domestic product (GDP) in the euro zone and in the European Union as a whole confirmed the advanced data published at the end of July. For the Eurozone, the fall in GDP in the second quarter of 2020 compared to the same quarter of 2019 stood at 14.7%, while in the overall European Union it was 13.9%. Out of the countries that came out worst off at the beginning of this crisis, Spain is the one that obtained the worst results, with a contraction of its GDP of 22.1%, the highest registered in its history, or at least since data is available . It is followed by France, with a fall of 18.9%, Italy, 17.7%, and Portugal, 16.3%. At the other end of the list is Ireland, where the economy only fell 3.7%.

The questions raised by COVID‑19

As for the uncertainty that the pandemic is leaving, the biggest question is how the economy will recover from this unprecedented crisis, what impact it will have in the medium term and if there will be consequences in the long term. Seeing the current panorama of uncertainty, there are those who predict that this crisis could lead to structural changes in the economy of many countries, such as Spain, which depends a lot on sectors such as tourism that were seriously affected.

Another deeply affected indicator, and in this case the consequences were already seen in the short term, is the electricity demand. Although this already recovered to a large extent, greatly favoured by a very hot summer, we still find values below those of last year in most European countries. In the medium term, could there be new confinements that would sink the demand again? In the long term, some voices say that this drop in demand will already be permanent. 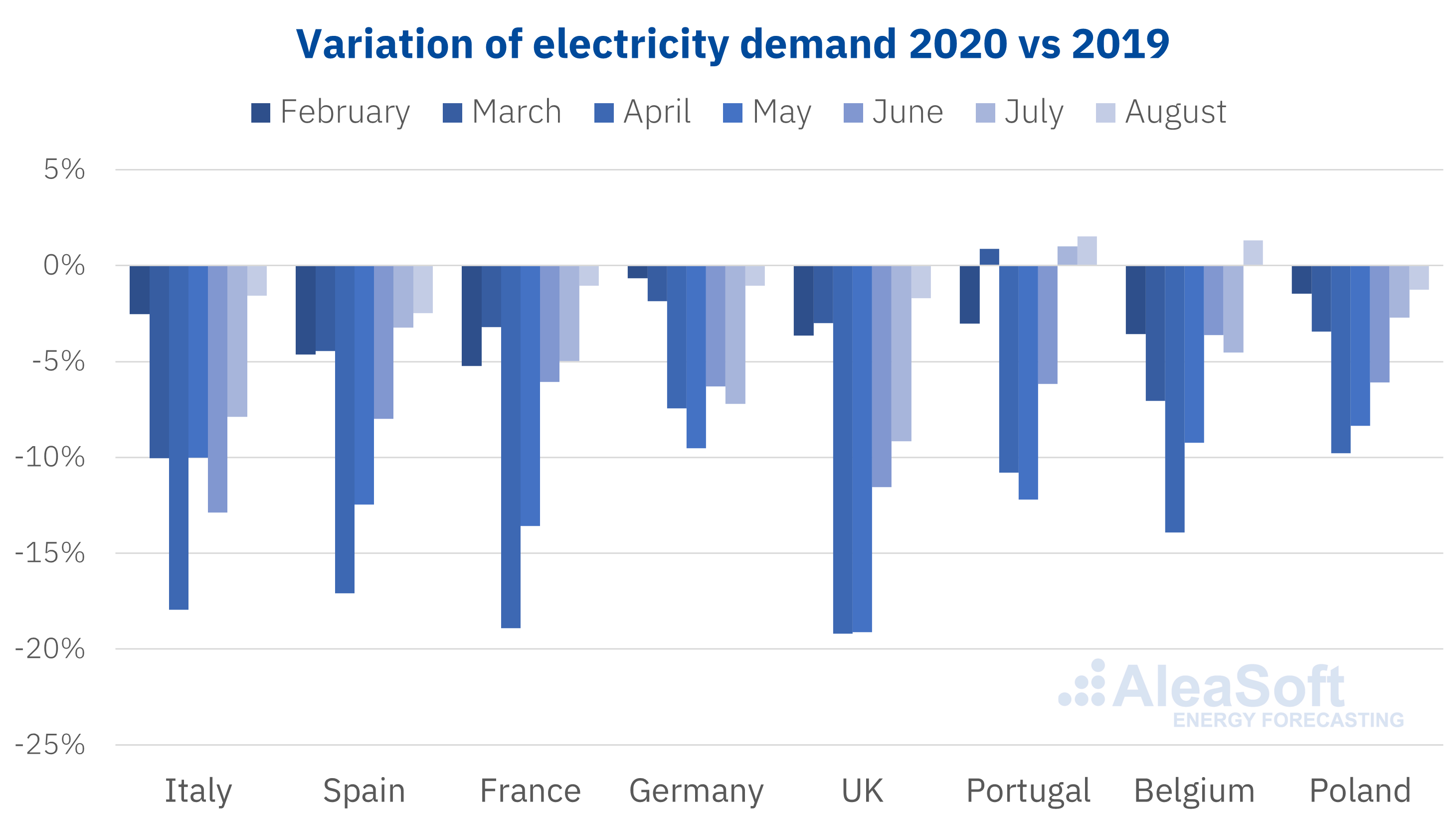 Analysing the European electricity markets prices, they recovered relatively quickly, but, like the demand, they are still below the prices of 2019. The uncertainty in the medium term is clear, waiting for how the pandemic and the economy evolve in fall and winter. Can it be said that this uncertainty will no longer be present in the long term? Is it safe and profitable to invest in renewable energy projects? That is another question that this crisis raised. In a situation like this, the importance of reliable and scientific forecasting at all horizons is highlighted: in the short and medium term to operate in the markets and in the long term for the investment planning, the project and portfolio valuation and for audits.

On the other hand, another big question hangs over the future of fuels. Will this crisis have an impact on the withdrawal of the fossil fuels for the electricity generation? What about for the transport and the industry? There are opinions in all directions: from its replacement by renewable energies and green hydrogen will accelerate to who says it will delay it.

Analysing the energy markets in the recovery from the economic crisis

To answer all these questions raised by the COVID‑19 crisis, at AleaSoft the series of webinars “Energy markets in the recovery from the economic crisis” was organised. The first part of this series will take place on Thursday, September 17, at 10:00 in English and at 12:00 in Spanish, and the latter will also include a discussion table afterwards. On this occasion, two invited speakers from two of the most important companies in the energy sector at the European level will participate: Daniel Fernández Alonso, Head of Energy Management at ENGIE Spain, and Roger Font Garcia, Projects, Assets and Specialised Businesses Global Manager at Banco Sabadell.

At the webinar the evolution of the European energy markets in the economic recovery, the impact and the current state of the financing of the renewable energy projects, and the importance of the forecasting in the audits and the portfolio valuation will be analysed. The registration is still open and later it will be possible to request the recording at webinar@aleasoft.com.

The second part of the webinar is scheduled for October 29, also in English and Spanish, and will be attended by two invited speakers from the consulting firm Deloitte: Pablo Castillo Lekuona, Senior Manager of Global IFRS & Offerings Services, and Carlos Milans del Bosch, Partner of Financial Advisory.