AleaSoft, September 14, 2020. In the third week of September, there will be a general increase in the European electricity markets prices, which thus return to the path of the recovery that momentarily slowed down during the first days of the second week of September. In some markets, falls in wind and solar energy production are expected, as well as an increase in temperatures during the first days of the week. Furthermore, the CO2 prices remain high.

The solar energy production fell in most European markets during the week of September 7 compared to the previous week. The declines continued in Portugal, Spain and Italy and they were joined by the fall of France. In the cases of the first two, the differences were more notable than those of the AleaSoft’s previous analysis, decreasing by 11% and 8.8% respectively. The last two registered declines of 3.3% in Italy and 3.6% in France. On the other hand, in Germany the solar energy production increased by 25%, maintaining the recovery that began two weeks ago.

From September 1 to 13, the solar energy production of Mainland Spain registered an increase of 65% in year‑on‑year terms. In Germany the increase was 22%, while in the rest of the analysed markets the increases were between 14% and 20%.

In the week of September 14, the solar energy production is expected to decrease in Spain and to increase in Germany and Italy, according to the AleaSoft’s solar energy forecasting. 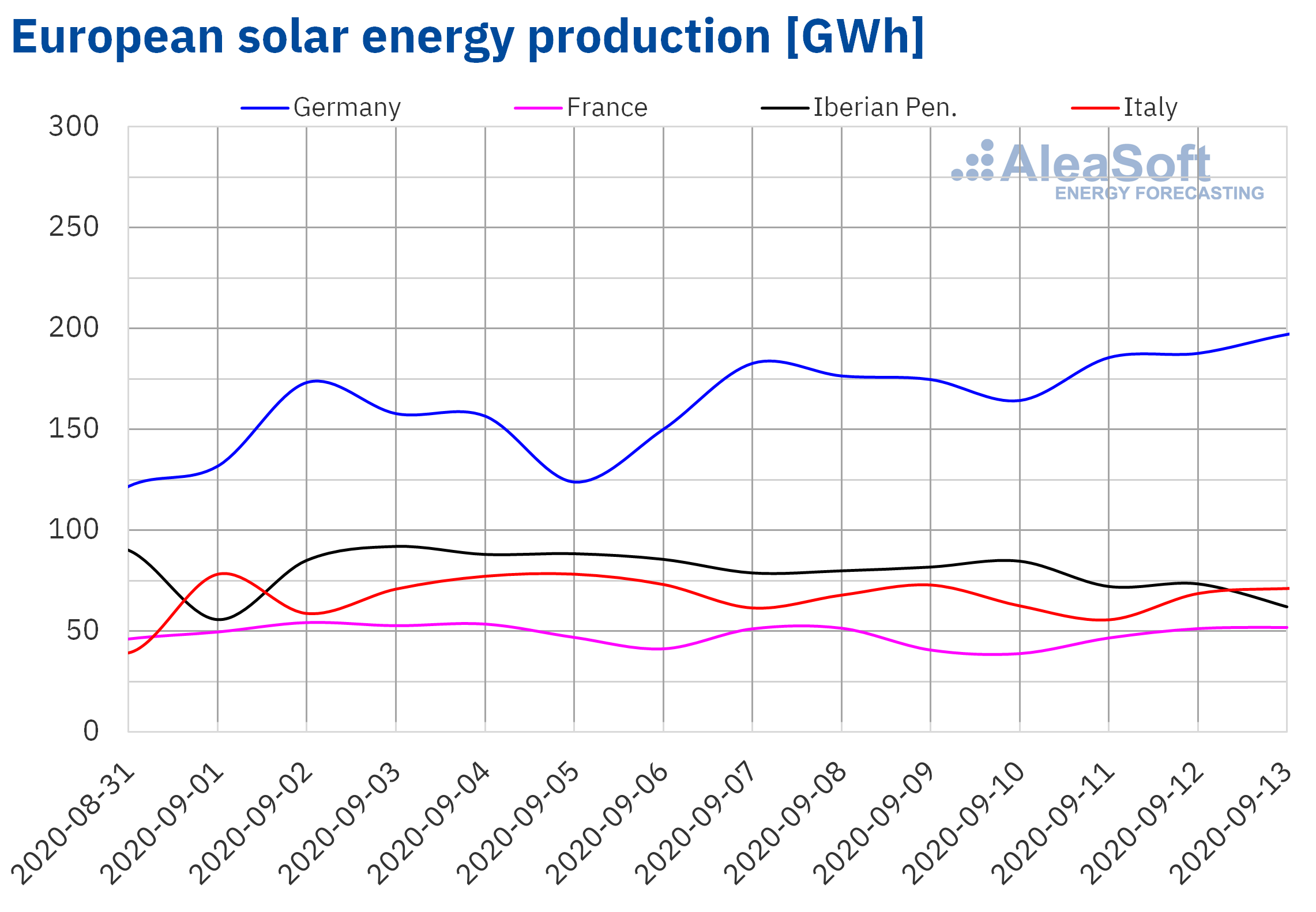 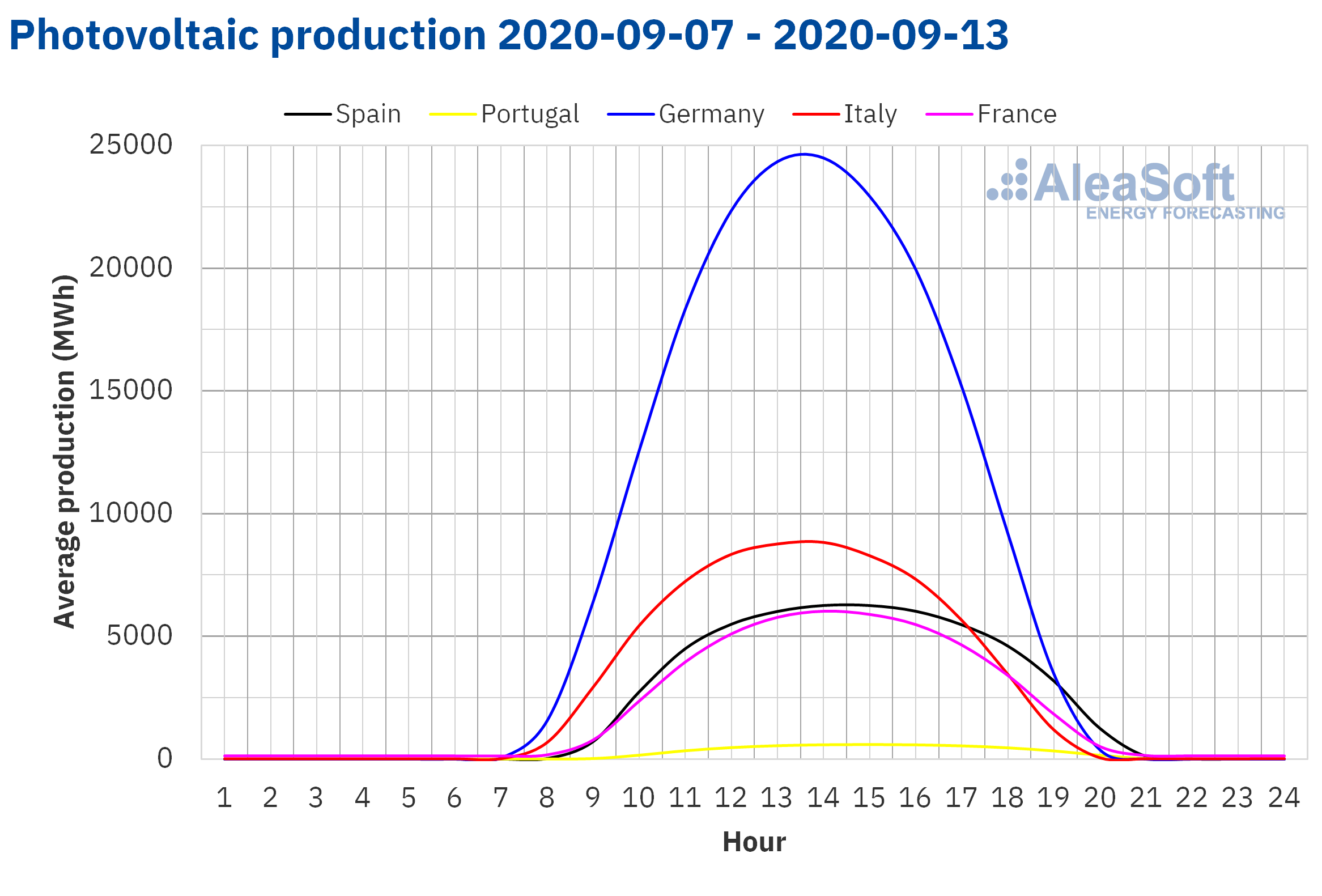 In contrast, the wind energy production registered increases in most European electricity markets during the second week of September compared to the week of August 31. Portugal, Germany and Spain registered the most notable variations, with increases of 36%, 27% and 9.7% respectively. In the case of the Italian market, the increase was 1.7%. On the other hand, in France there was a 26% drop.

The panorama of the wind energy production was different in the comparison between the first 13 days of September 2020 and the same period of 2019, as there were decreases in all the analysed markets. In the Iberian Peninsula, France and Italy the falls were more pronounced than in Germany, with decreases of 34%, 31%, 30% and 9% respectively.

At AleaSoft, it is expected that, in the week of September 14, the wind energy production will recover in France and Spain and that it will decrease in the rest of the analysed markets. 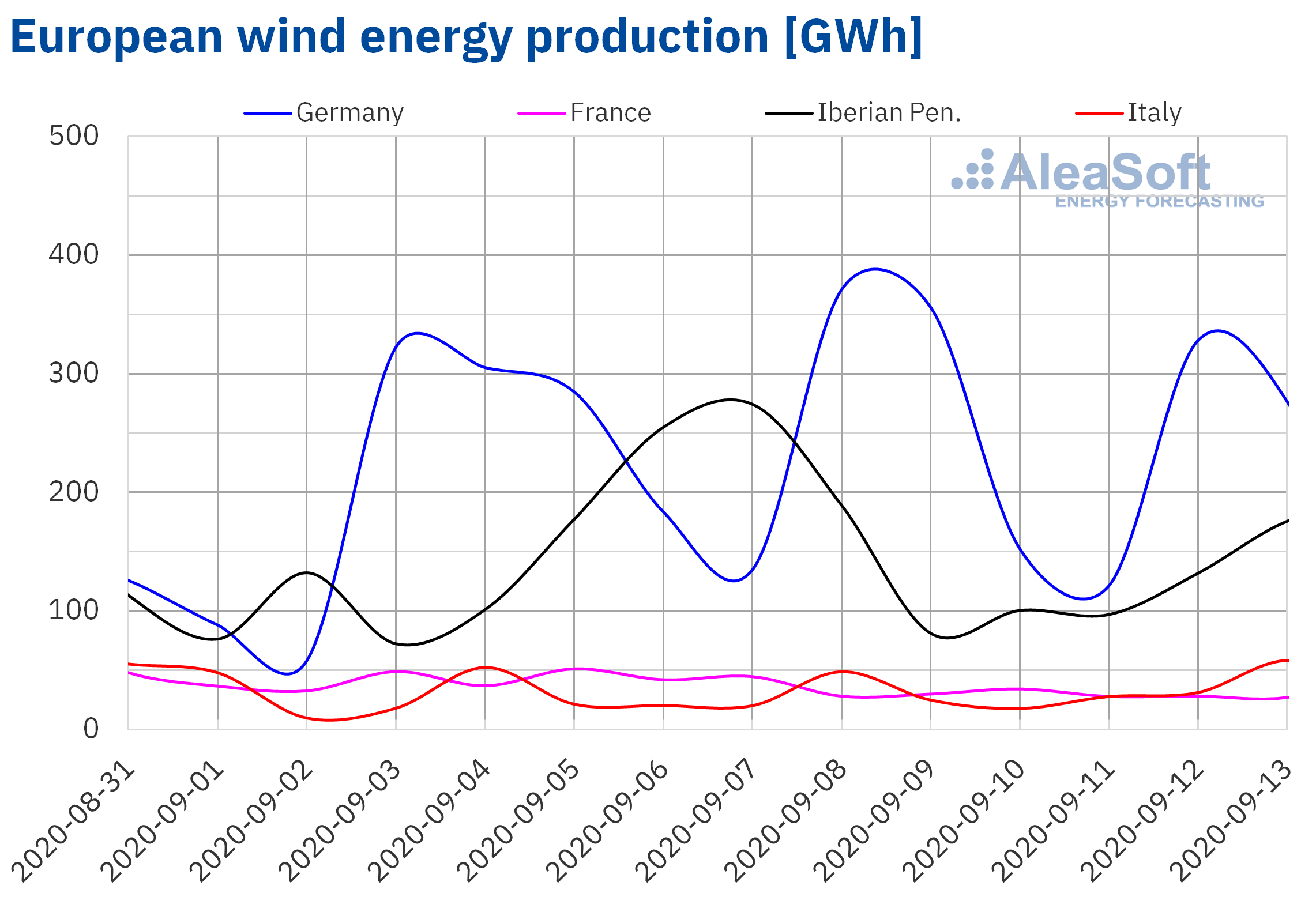 The electricity demand was on the rise in most European markets during the second week of September. The exception was the German market, where the demand decreased by 0.2% compared to the week of August 31. On the other hand, the largest increases were registered in the Italian market, of 5.0%, and in the Portuguese market, of 4.6%. In the rest of the markets, the demand increased between 0.1% and 1.4%. The average temperatures during the week of September 7 increased across the continent between 0.5 °C and 2 °C compared to the previous week.

At the AleaSoft’s electricity markets observatories, which have hourly, daily and weekly data visualisations, the behaviour of the demand during the last three weeks can be analysed. 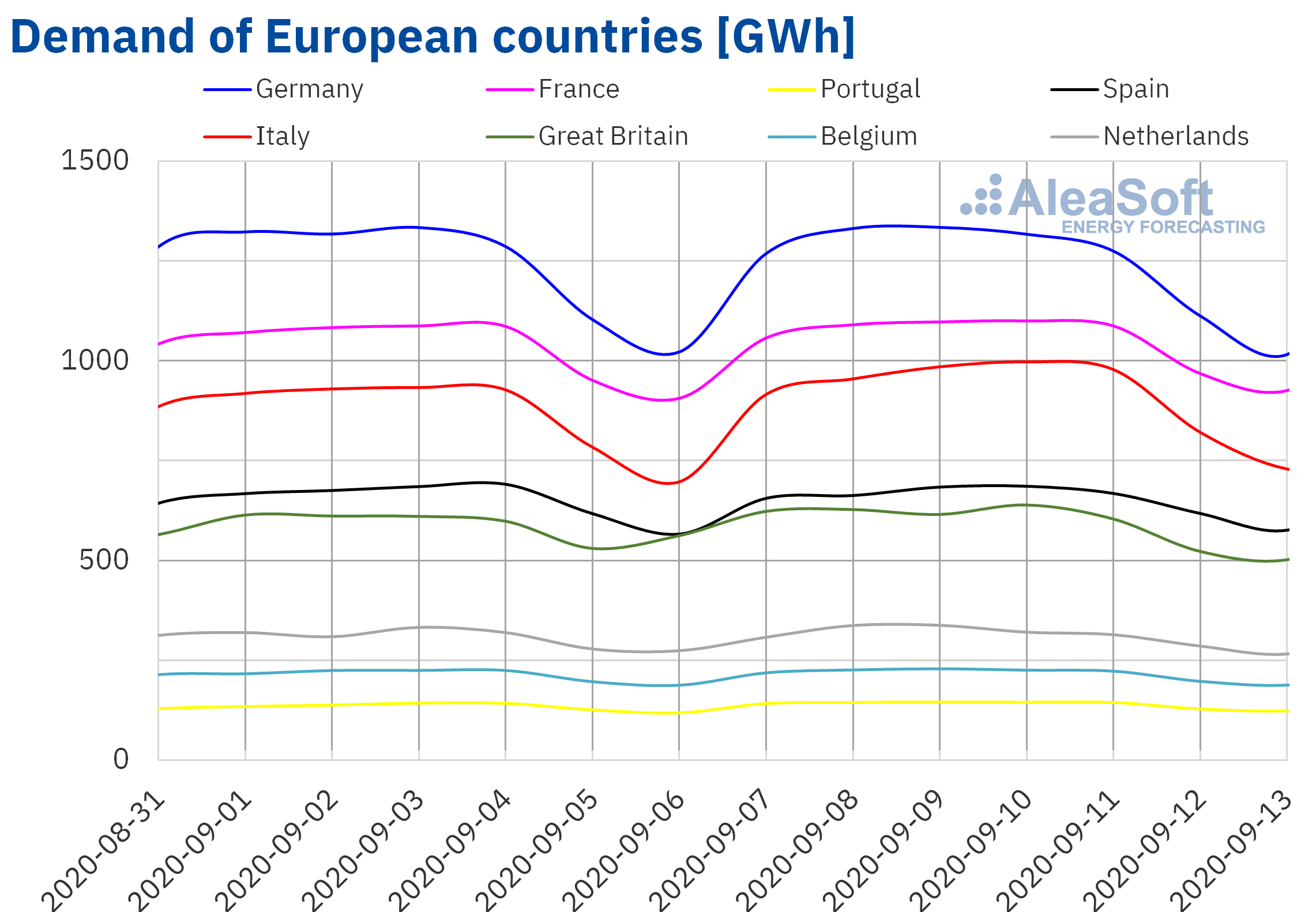 The second week of September, most electricity markets reached weekly averages above €40/MWh. The highest, of €48.00/MWh, was that of the Italian market. In contrast, the Nord Pool market and the EPEX SPOT market of Germany and the Netherlands had average prices of €16.94/MWh, €37.85/MWh and €39.22/MWh respectively. The rest of the markets had average prices between €41.76/MWh of the Belgian market and €45.69/MWh of the French market.

During the week of September 7, daily prices above €50/MWh were reached in the markets of France and Italy. The highest daily price of the week, of €56.83/MWh, was that of Friday, September 11, in the Italian market. On the other hand, the lowest price, of €10.84/MWh, was reached on Sunday, September 13, in the Nord Pool market. That day there were also prices below €30/MWh in the markets of Germany, the Netherlands and Belgium, with values of €20.19/MWh, €25.48/MWh and €28.31/MWh respectively.

During the second week of September, the European markets prices were loosely coupled. But the third week of September began with a greater coupling among most markets, whose prices exceeded €50/MWh on Monday, September 14. The exceptions were the MIBEL market of Spain and Portugal and the Nord Pool market, which had lower prices. 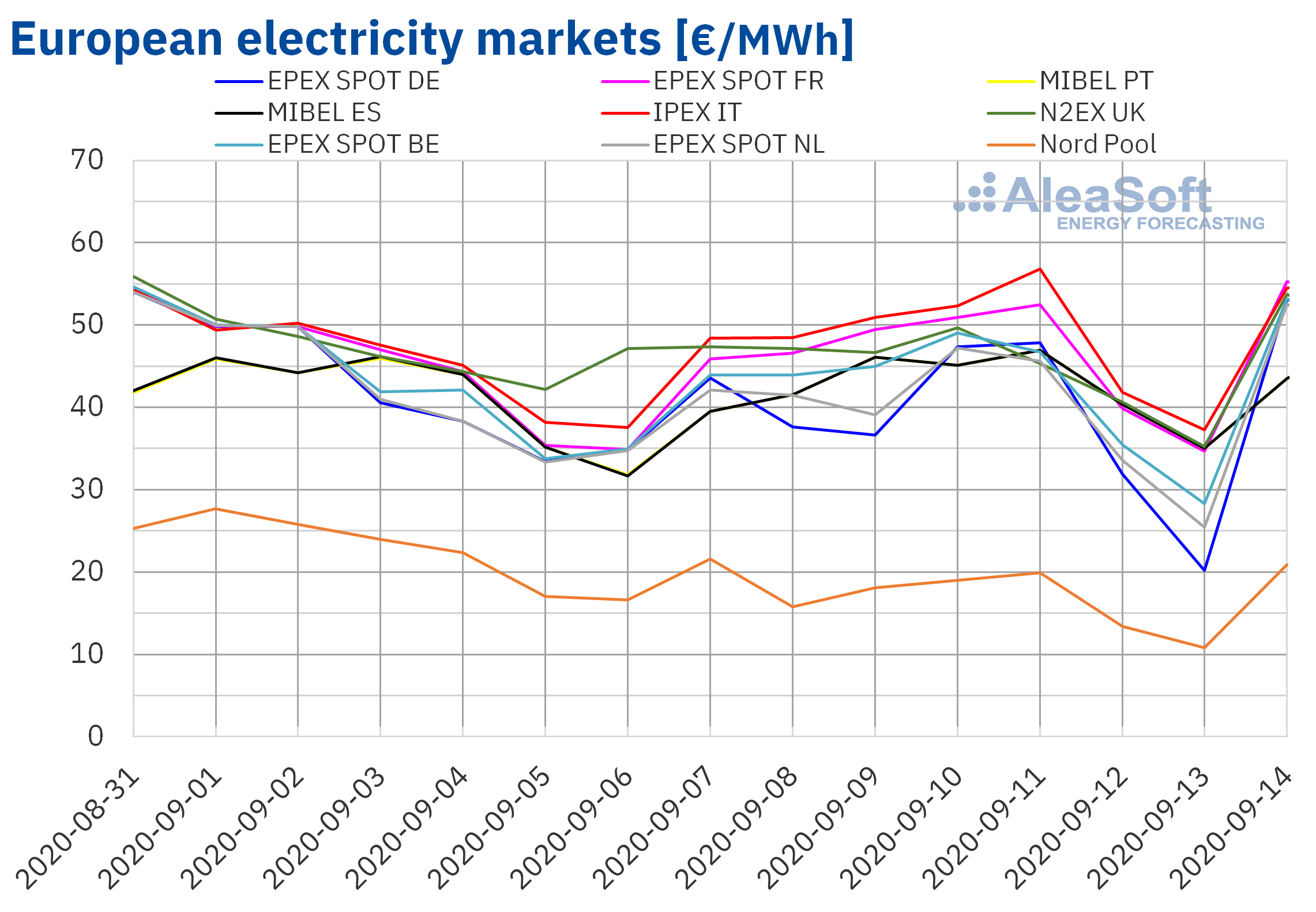 The AleaSoft‘s price forecasting indicates that in the week of September 14 there will be a generalised increase in prices in the analysed European electricity markets, influenced by a lower renewable energy production in most markets and in some cases by the increase in temperatures during the first days of the week, which will favour the increase in electricity demand. In addition, the CO2 prices are above €28/MWh, which also favours the price rise. 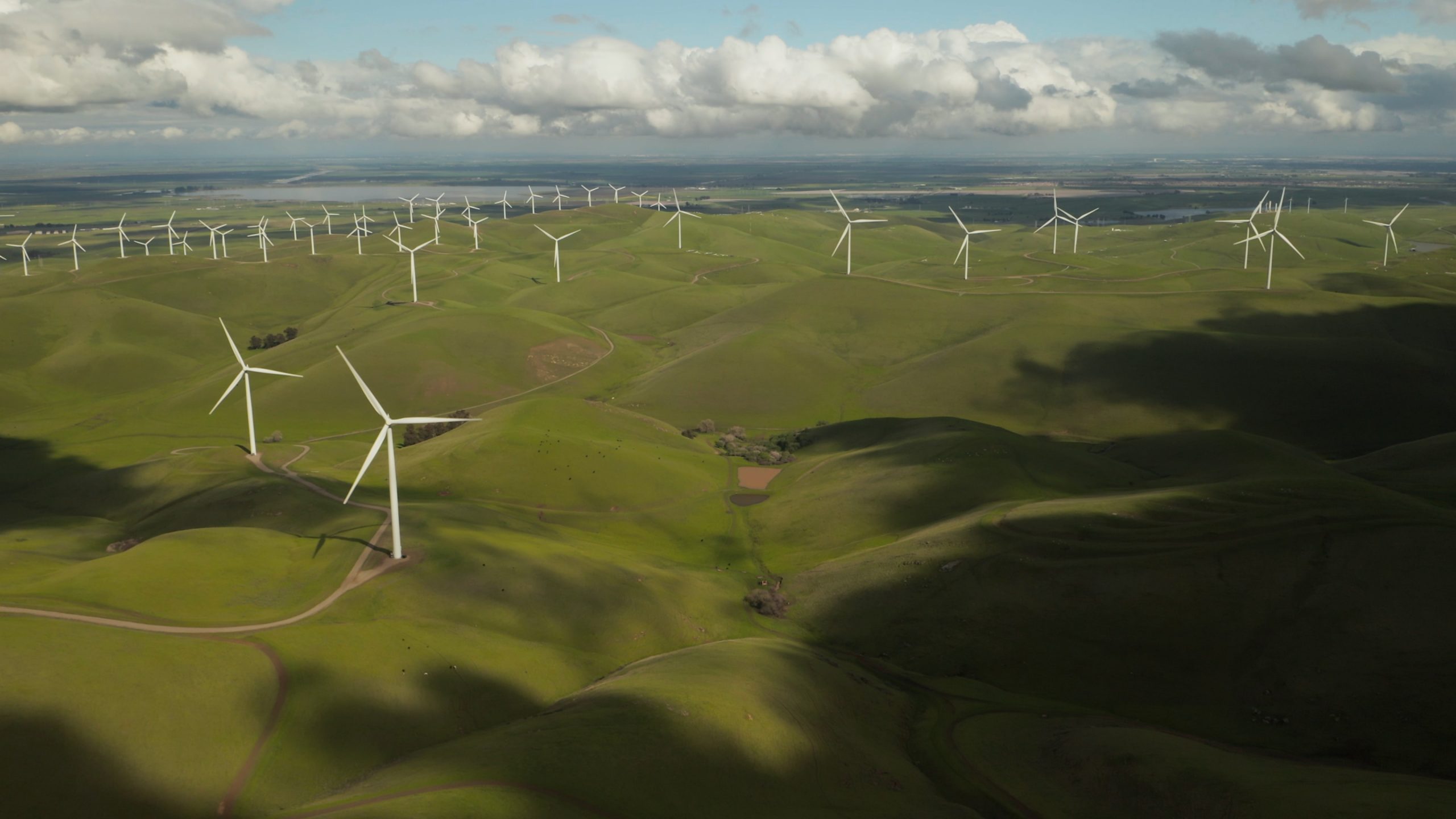 During the week of September 7, the electricity futures prices for the next quarter in most of the main European electricity futures markets registered decreases compared to the end of the week of August 31. The exception was the markets of the Nordic countries, where both the ICE market and the NASDAQ market registered increases, of 0.7% and 1.2% respectively. In the rest of the markets the decreases were between 1.2% of the EEX market of Great Britain and 6.3% of the EEX market of Italy, closely followed by the ICE market of Belgium with a decrease of 6.2%.

The Brent oil futures prices for the month of November 2020 in the ICE market started the week of September 7 with decreases. The most pronounced, of 5.3%, was that of Tuesday, September 8. That day a settlement price of $39.78/bbl was reached, 13% lower than that of the same day of the previous week and the lowest since the first half of June. However, on Wednesday, September 9, there was a 2.5% recovery and the settlement price once again exceeded $40/bbl. But the prices fell again and on Friday, September 11, it settled at $39.83/bbl, 6.6% lower than that of the previous Friday.

In the coming days, the production cuts in the Gulf of Mexico due to the Tropical Storm Sally could favour a recovery in prices. However, the advance of the pandemic and its effects on the demand continue to cause concern.

As for the TTF gas futures prices in the ICE market for the month of October 2020, the second week of September had a downward trend. The minimum settlement price of the week, of €10.50/MWh, was reached on Friday, September 11. This value is 10% lower than that of the previous Friday, September 4.

On the other hand, the API 2 coal futures prices in the ICE market for the month of October 2020, during the second week of September, recovered from the decreases of the previous week. On Friday, September 11, a settlement price of $53.30/t was reached, 1.9% higher than that of the previous Friday.

As for the CO2 emission rights futures in the EEX market for the December 2020 reference contract, on Tuesday, September 8, they reached a settlement price of €26.79/t, the lowest since the fourth week of August. But in the last days of the second week of September, the prices once again exceeded €28/t. The maximum settlement price of the week, of €28.43/t, was registered on Thursday, September 10. 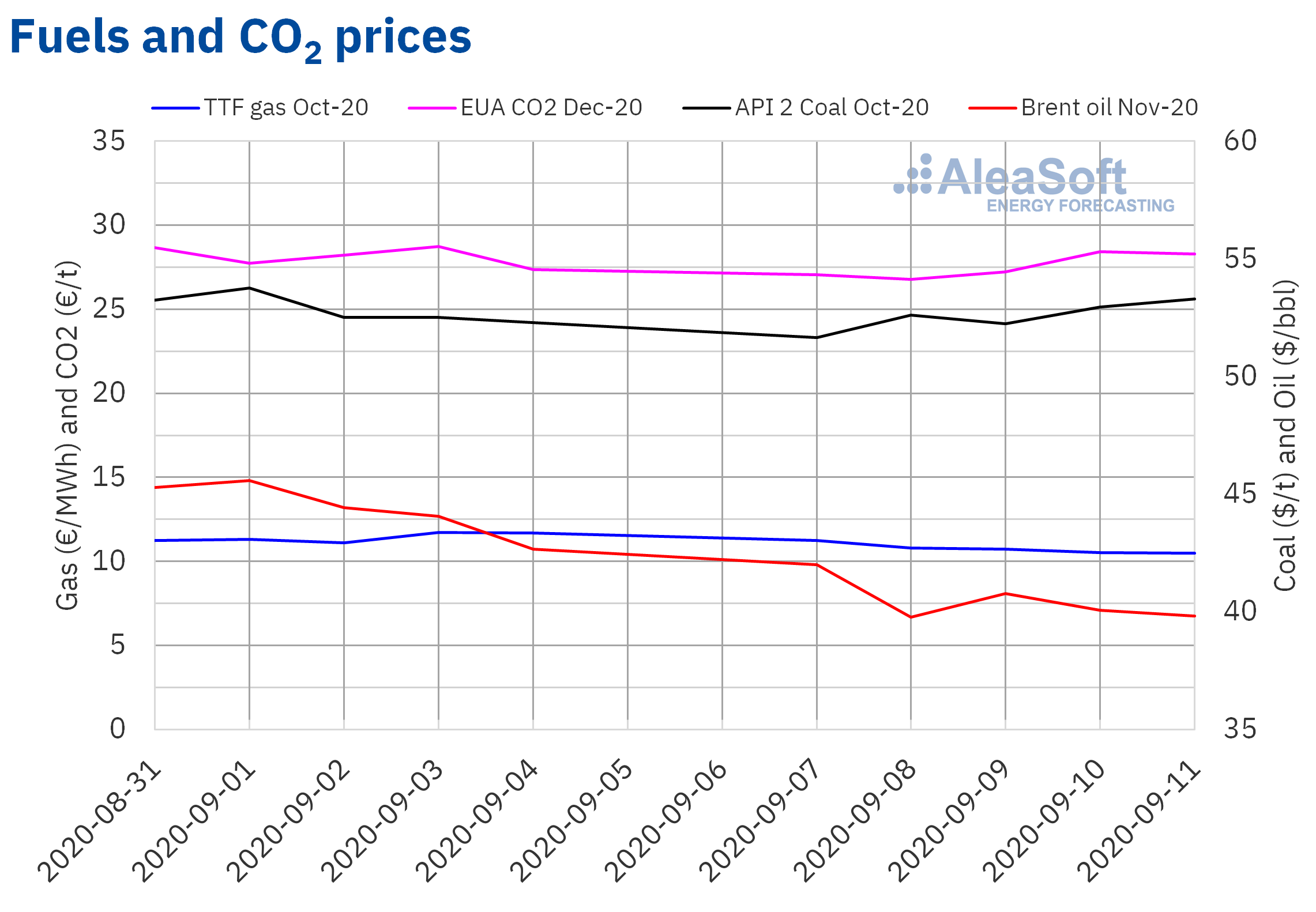 Next Thursday, September 17, the first part of the webinar “Energy markets in the recovery from the economic crisis” organised at AleaSoft will take place. After the worst part of the pandemic was over, major outbreaks of the disease were not expected until autumn. However, since the second half of July, the COVID‑19 infections began to increase in Spain and in the rest of the European continent. The webinar will analyse whether there were any effects on the demand, the European electricity markets, and the fuels and CO2 markets due to this increase in the number of infected. The financing of the renewable energy projects and whether these were affected by the outbreaks of the disease and in general by the coronavirus crisis will also be discussed. The analysis of the energy markets and the financing of renewable energy projects will also focus on the prospects in the medium and long term, taking into account the uncertainty about the exit from the economic crisis, amid the current context in which the return to the schools in person and the approach of autumn raises fears that the outbreaks will continue to increase. Another topic that will be discussed at the meeting is the importance of the electricity markets prices forecasting in the portfolio valuation and the audits. The webinar will feature speakers from Engie, Banco Sabadell and AleaSoft. At the end of October, on the 29th, a second part will be held in which these topics will continue to be deepened with speakers from Deloitte and AleaSoft.

The AleaSoft’s mid and long term European electricity markets prices forecasting is periodically updated and takes into account the recovery scenarios from the coronacrisis, as well as the outlook for the possible increase in outbreaks.

At the AleaSoft’s markets observatories, the energy markets can be monitored in recent weeks, which makes it possible to analyse whether they were affected by the increase in those infected by COVID‑19. The observatories include comparative graphs with the main variables of the European electricity, gas, oil and CO2 markets, whose data is updated daily.

PrevAnteriorWind energy, fuels and CO2 momentarily slow down the recovery of the European electricity markets
SiguienteThe uncertainty created and the questions raised in the energy markets by the coronavirus crisisNext
Menu
Facebook-f Twitter Linkedin Instagram