AleaSoft, July 20, 2020. In the third week of July, the behaviour of the European electricity markets was determined by the variability of the renewable energy production. In most markets, the prices rose due to the decrease in wind and solar energy production, reaching in some cases daily prices above €40/MWh. However, in the MIBEL market, the prices fell due to increased production with these technologies. The CO2 prices slowed the uptrend but remain high.

During the week of July 13, the number 29 of the year, the solar energy production decreased by 12% in the French market, by 6.9% in the Italian market and by 1.5% in the German market. On the contrary, in Spain and Portugal it increased by 2.4% and 1.7% respectively.

During the 19 elapsed days of July, the solar energy production was higher than in the same period of 2019 in all the markets analysed at AleaSoft. In the Spanish market it increased by 64% and in the Portuguese by 39%. In the rest of the markets, the production increased between 15% and 3.3%. 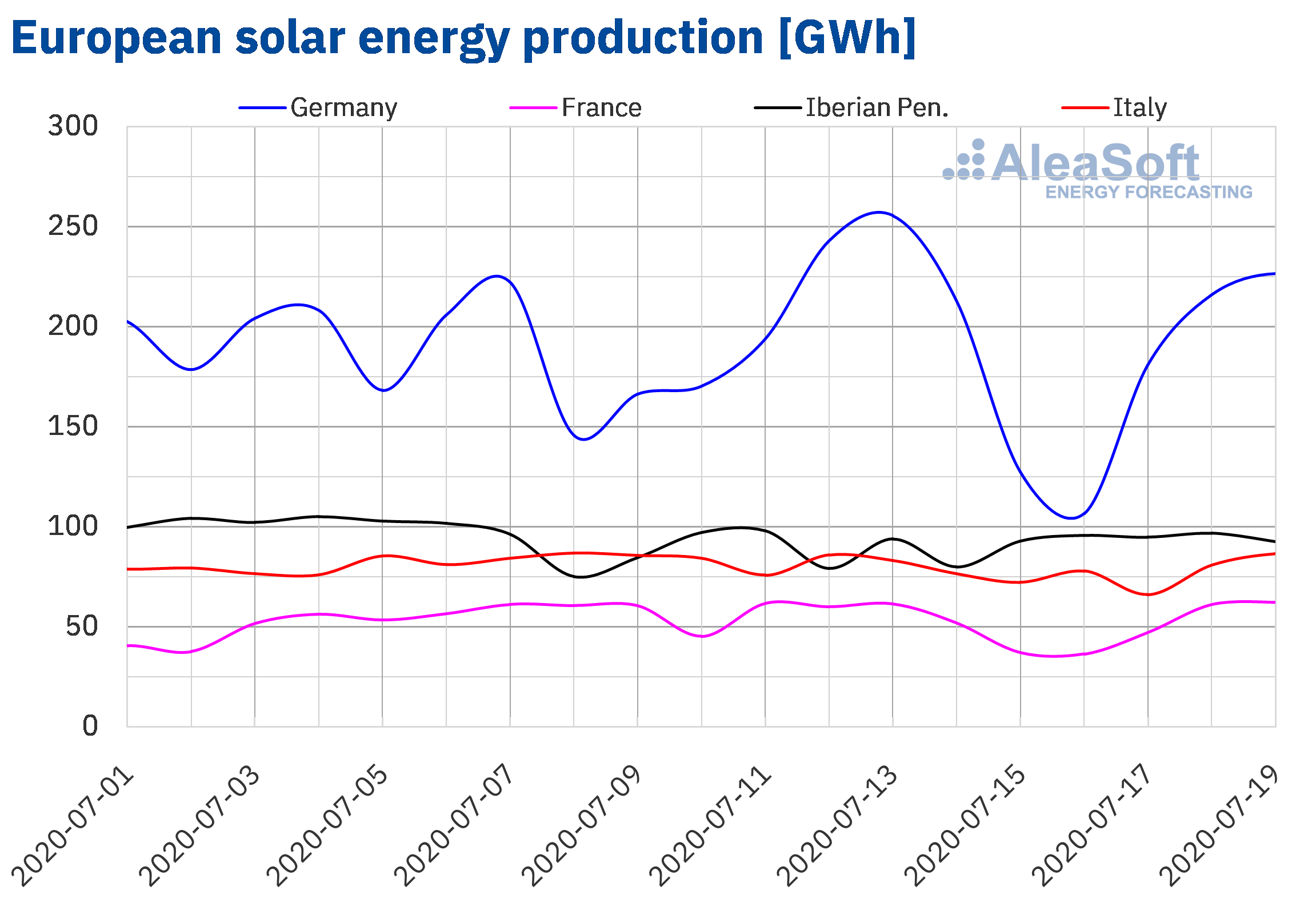 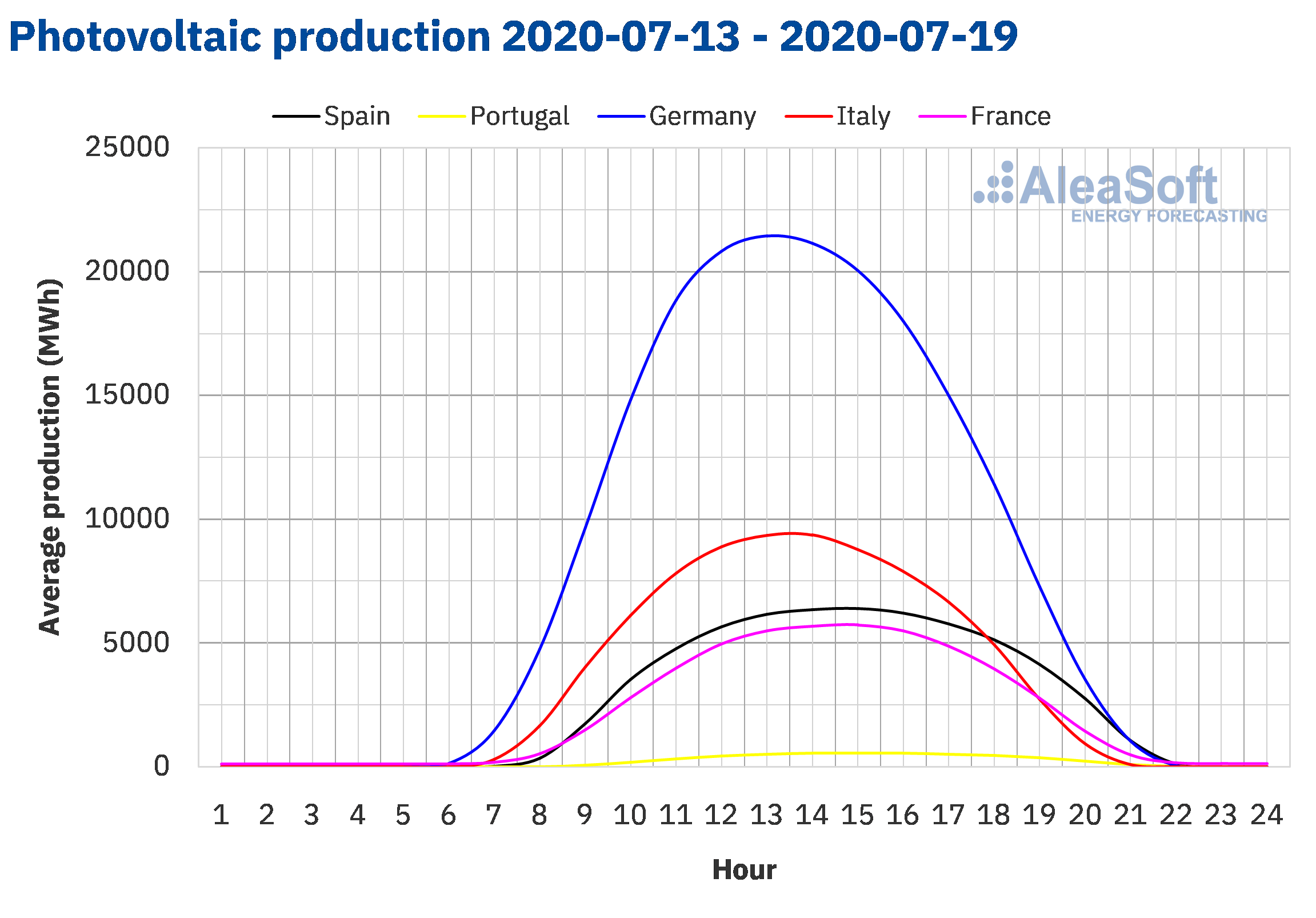 In the year‑on‑year analysis, between July 1 and 19, the wind energy production was also higher in all the markets analysed at AleaSoft. The markets of Spain, Portugal and France were those with the greatest increases in generation with this technology, of 54%, 44% and 34% respectively. Similarly, in the Italian market it increased by 8.4% and in the German by 2.4%.

For the week of Monday, July 20, the AleaSoft‘s wind energy production forecasting indicates an increase in production in the markets of Germany and France. On the contrary, a reduction in production is expected in Italy and the Iberian Peninsula. 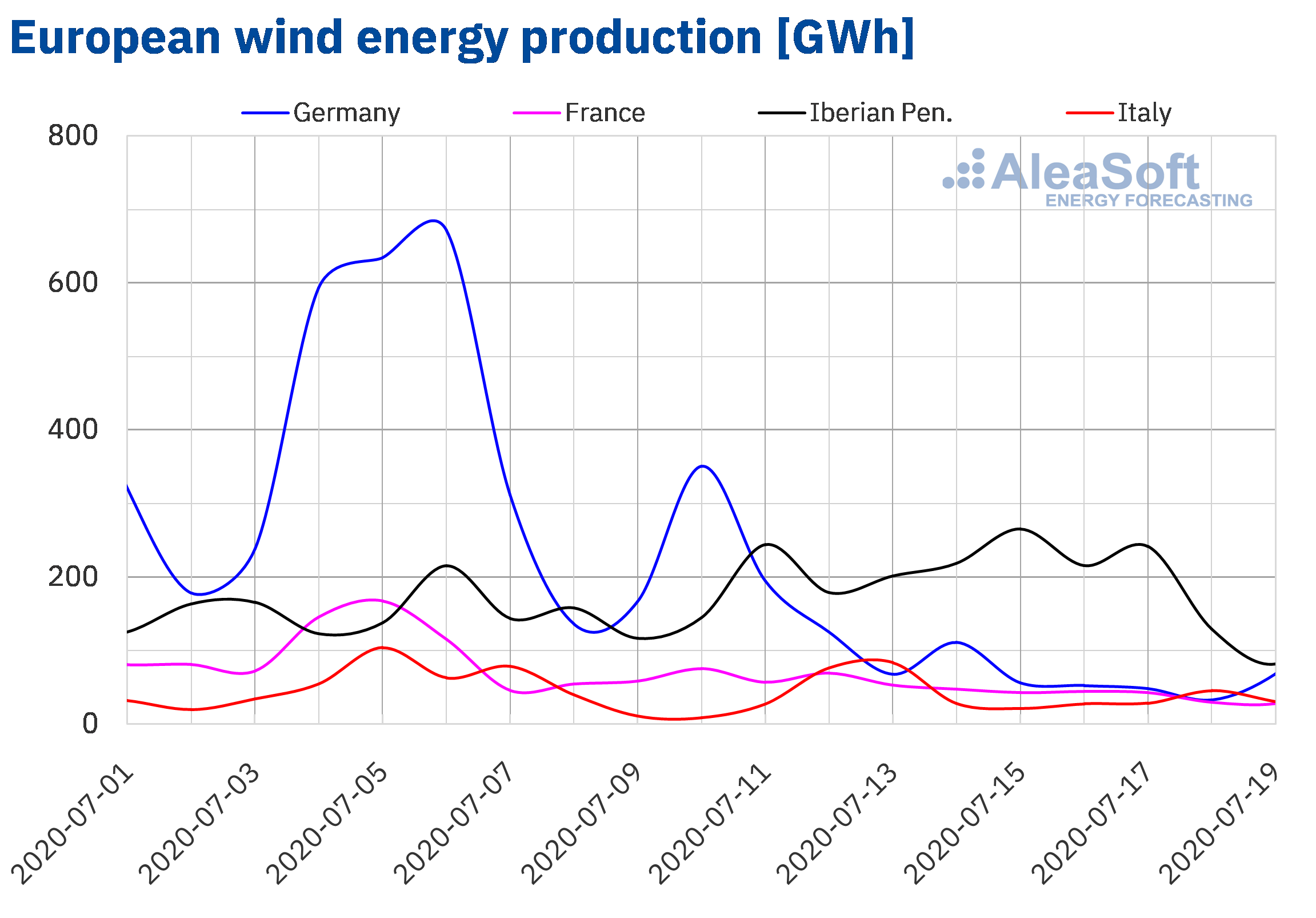 The electricity demand of the European markets behaved in a heterogeneous way during the week of July 13. In France a fall of 2.9% with respect to the week of July 6 was registered, due to the effect of the holiday of Tuesday, July 14, National Day of France. A greater decrease, of 3.1%, was registered in Italy because the average temperatures were 1.2 °C less warm. In Germany and Spain the demand also fell, 0.7% and 1.4% respectively. On the other hand, in Portugal the demand continued to recover for the fifth consecutive week, reaching an increase of 5.0% compared to the second week of July. In Great Britain there was a small increase of 0.7%. While in Belgium, the demand was very similar to that of week 28 of 2020.

The AleaSoft‘s electricity observatories allow daily monitoring of the Europe’s demand, together with other variables of the electricity markets.

For this week, the AleaSoft‘s demand forecasting indicates that demand will fall in a large part of the European markets, while in France and Spain it will increase. 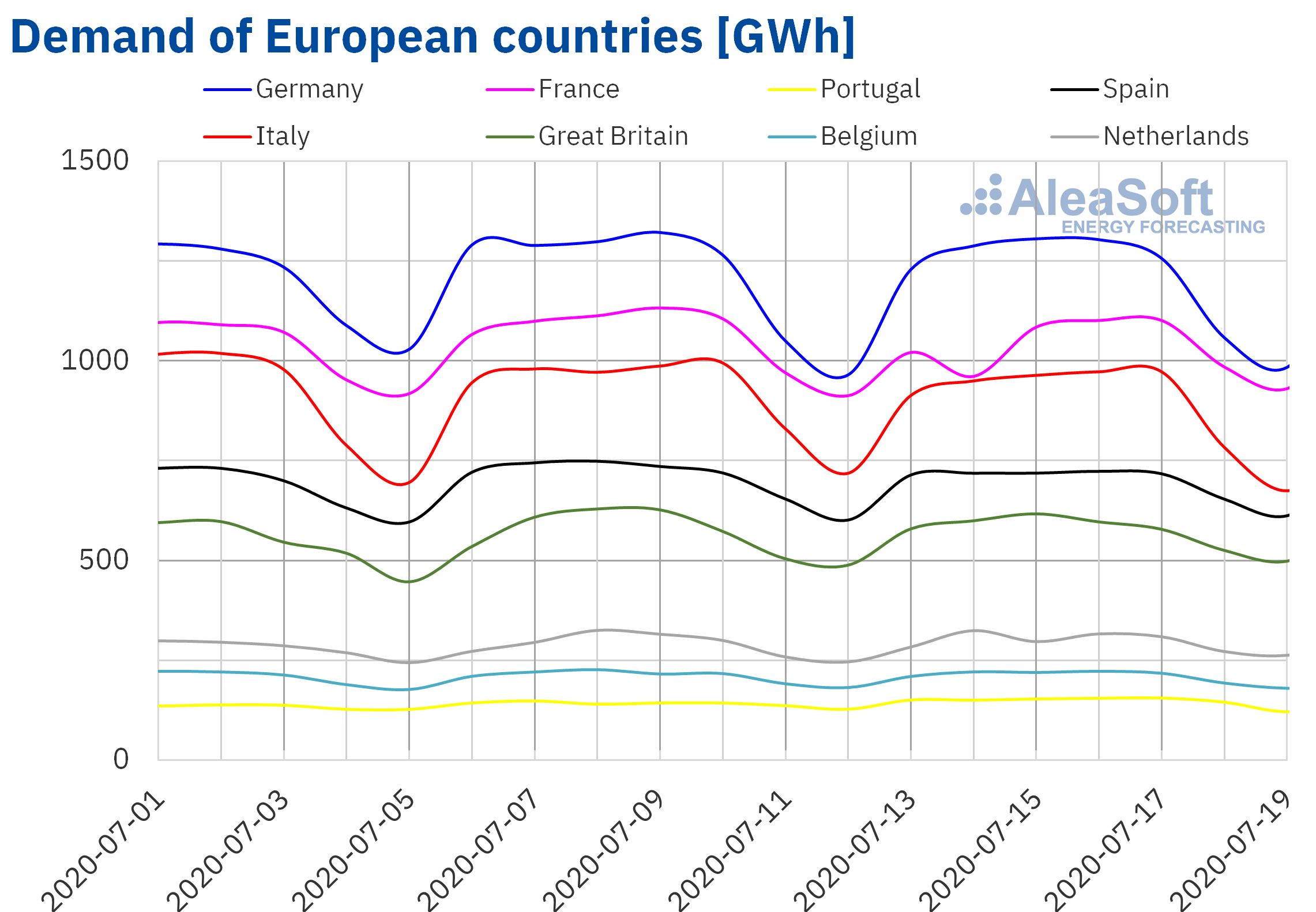 The week of July 13, the prices were higher than those of the week of July 6 in most of the analysed European electricity markets. The exception was the MIBEL market of Spain and Portugal with a decrease of 4.3%. On the other hand, the market with the highest price increase, of 36%, was the Nord Pool market of the Nordic countries, followed by the EPEX SPOT market of Germany, with an increase of 14%. While the market where the price rose less, by 1.5%, was the IPEX market of Italy. In the rest of the markets, the price increases were between 2.0% of the N2EX market of Great Britain and 12% of the EPEX SPOT market of the Netherlands.

In the third week of July, the European market with the lowest average price, of €3.30/MWh, was the Nord Pool market. The rest of the analysed markets had weekly averages higher than €30/MWh and they were quite coupled during the weekend. The reached average prices were between €32.43/MWh of the MIBEL market and €36.09/MWh of the IPEX market.

As for the daily prices, on Wednesday, July 15, the price exceeded €40/MWh in the German, Italian and Belgian markets. On July 16, the markets with daily prices above €40/MWh were those of Germany, France, Italy, Belgium and the Netherlands. That day the highest daily price of the week, of €44.45/MWh, was reached in the German market. Instead, on Saturday, July 18, the prices were lower than €30/MWh in the markets of Germany, Belgium and the Netherlands, in addition to the Nord Pool market, where the prices were lower than €5/MWh throughout the week. On Sunday, July 19, the daily prices were below €30/MWh in all the analysed European electricity markets, except in the MIBEL market and the N2EX market.

On the other hand, on July 15 hourly prices above €50/MWh were reached in Germany and Belgium. On Thursday, July 16, in addition to those two markets, they also exceeded €50/MWh in the French market. 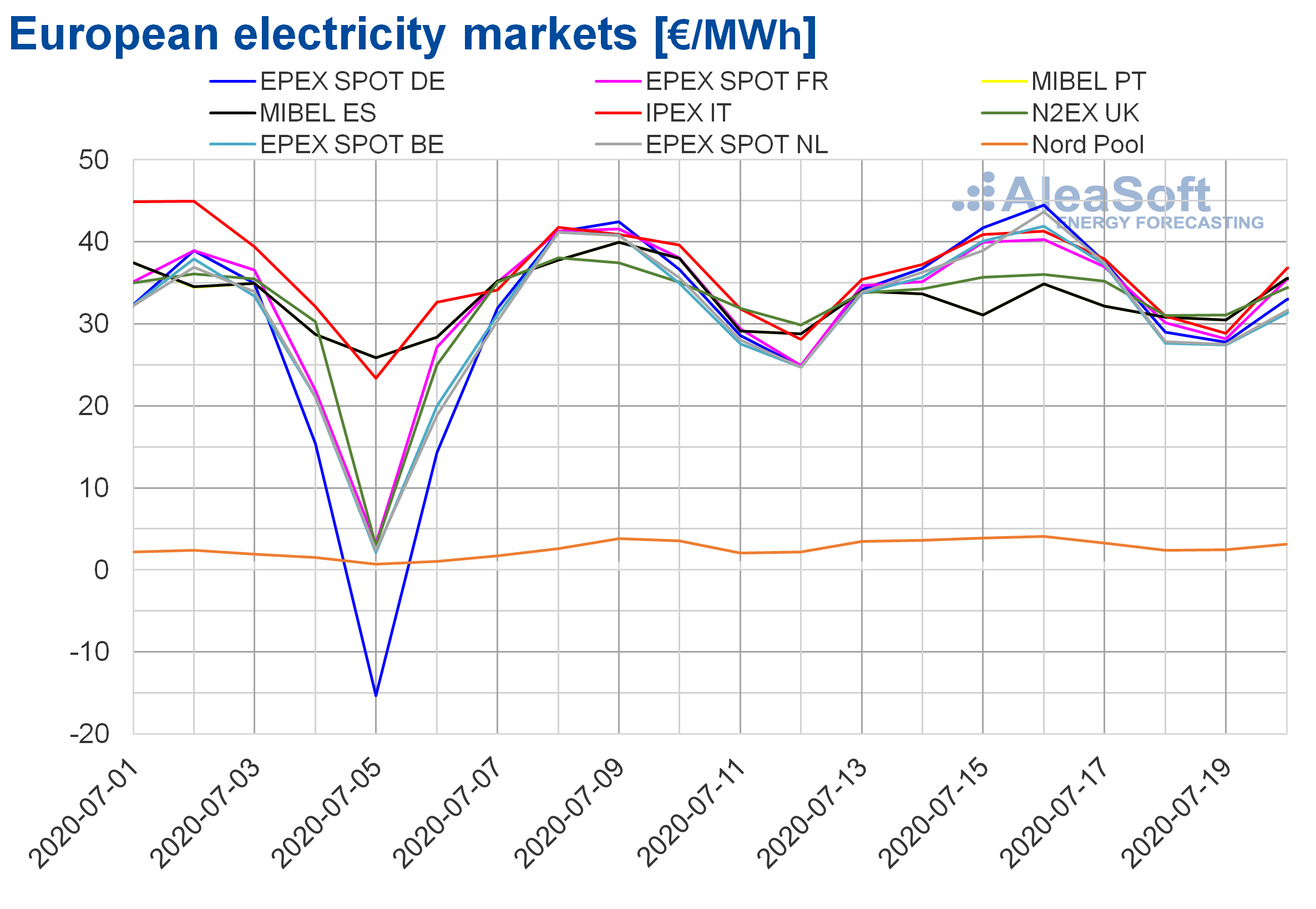 The price increases in the third week of July were mainly related to the decrease in wind and solar energy production in some European countries such as Germany, France and Italy. The high CO2 prices are another factor that favoured the increase in electricity markets prices. However, in Spain and Portugal the renewable energy production increased, allowing the price drop in the MIBEL market. 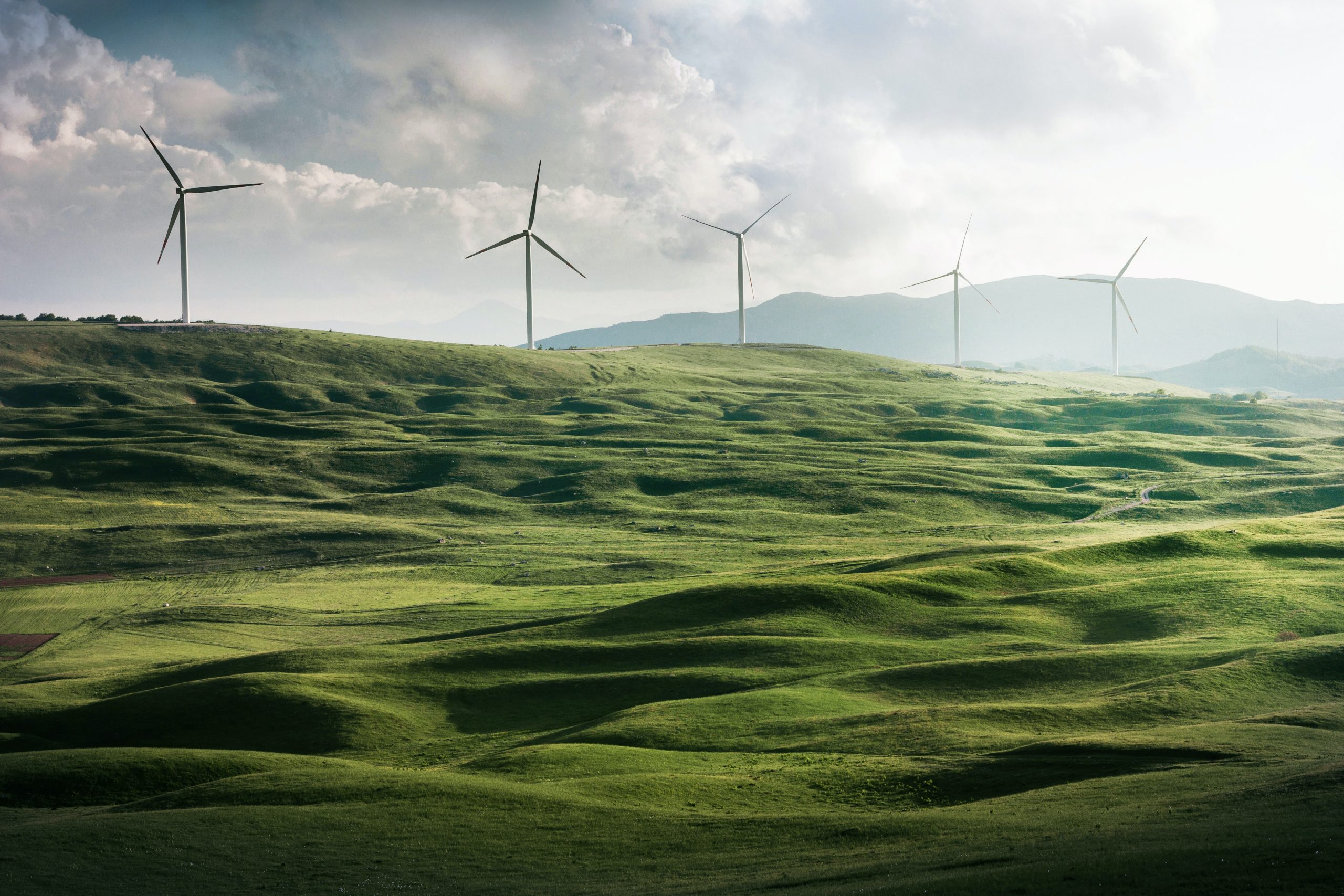 The AleaSoft‘s price forecasting indicates that the week of July 20 the prices will increase in the IPEX and MIBEL markets, influenced by the decrease in wind energy production, and in the Belgian market. While in Germany and France, where the production with this technology is expected to recover, the prices will fall in conjunction with the markets of Great Britain and the Netherlands.

The electricity futures for Q4‑20 registered declines in almost all the markets analysed at AleaSoft if the settlement prices of the sessions of July 10 and 17 are compared. The exception was the ICE market of Belgium, where the prices increased by 2.6%. As for the decreases, the smallest variation in the prices, of 0.9%, was in the EEX market of Spain, closely followed by the 1.1% of the OMIP market of Spain and Portugal. Meanwhile, the greatest drop occurred in the ICE market of the Nordic countries, with a 9.7% decrease between the analysed sessions.

The Brent oil futures for the month of September 2020 in the ICE market, the first days of the third week of July had settlement prices below $43/bbl. But, on Wednesday, July 15, a settlement price of $43.79/bbl was reached, the highest since early March. Subsequently, there were slight decreases on Thursday and Friday and the settlement price of Friday, July 17, was $43.14/bbl.

The behaviour with which this market ended the week is related to the decision of the OPEC+ of reducing its production cuts from August. According to this organisation, the resulting increase in production may be absorbed by the market due to the recovery in demand. However, there is concern that the demand will drop again due to new COVID‑19 outbreaks, which may lead to further confinements.

Regarding the TTF gas futures prices in the ICE market for the month of August 2020, the week of July 13 they remained quite stable and above €5/MWh, but with values lower than those of the week of July 6, when they exceeded €6/MWh. The minimum settlement price for the third week of July, of €5.06/MWh, was reached on Thursday, July 16. This was 12% lower than that of Thursday, July 9, and the lowest since the beginning of June.

Concerning the TTF gas prices in the spot market, the third week of July they remained below €5/MWh. The week’s minimum index price, of €4.23/MWh, was that of Wednesday, July 15, which was the lowest since the beginning of June. However, the prices recovered to reach an index price of €4.75/MWh for the weekend.

As for the CO2 emission rights futures prices in the EEX market for the reference contract of December 2020, at the beginning of the third week of July, they increased until Tuesday, July 14, when the highest settlement price of the week, of €29.65/t, was reached. In contrast, on Wednesday and Thursday, the prices fell by 2.7% and 7.8% respectively, registering a settlement price of €26.61/t on Thursday, July 16. This price is 7.0% lower than that of Thursday of the second week of July and the lowest since the end of June. However, on Friday, July 17, the prices recovered by 4.5%, settling at €27.81/t. 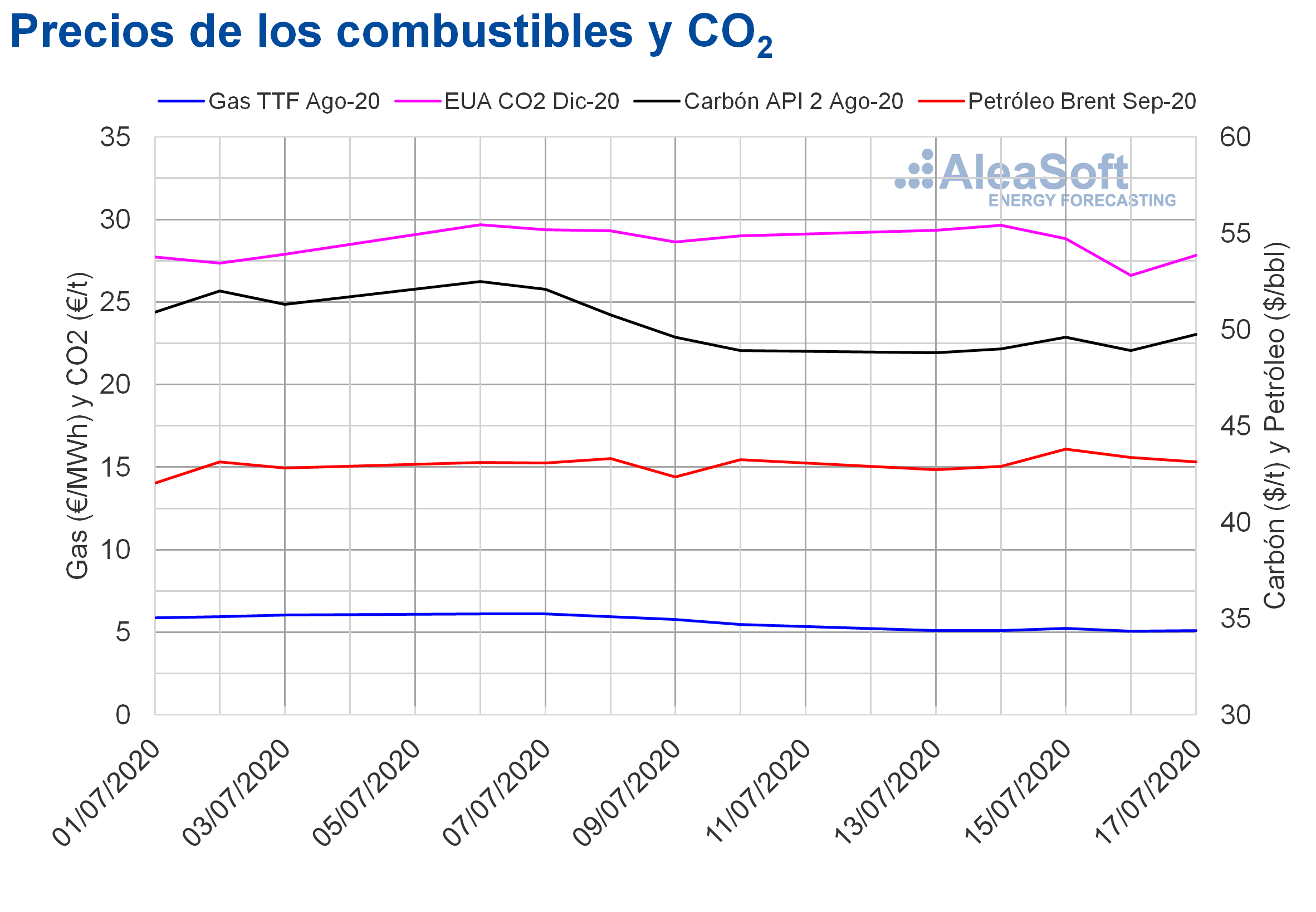 AleaSoft is offering a new technical expertise service for the arbitration and the mediation associated with the electricity and gas markets of Spain and Portugal. Through this service, AleaSoft, as a specialist in the energy sector, helps in the mediation of disputes related to the early termination of energy supply contracts or PPAs, by evaluating the damages caused by the price falls due to the coronavirus crisis or it is presented as a neutral third party in cases where they want to update the conditions of the contracts taking into account the current market circumstances.

This service joins other initiatives carried out at AleaSoft since the coronacrisis began. One of these initiatives are the webinars that were organised to analyse the evolution of the energy markets in this situation. The next webinar “Energy markets in the recovery of the economic crisis” will be held on September 17 and it will cover the following topics:

Outbreaks of the pandemic are currently taking place worldwide. This is an unforecasted situation, since no major outbreaks were expected during the summer, but the incidence was expected to be higher in the fall and winter. This scenario may bring unforecasted movements in the futures markets in the medium term, which could react with declines. At AleaSoft the long‑term price curves were updated to take into account the current circumstances.

The evolution of the main European electricity, fuels and CO2 markets can be analysed at the AleaSoft’s observatories with data that is updated daily, another initiative that was carried out since the COVID‑19 crisis began.