On vespers of Christmas, record prices were registered in European electricity markets

AleaSoft Energy Forecasting, December 27, 2021. Most of European electricity markets registered all‑time high prices in the days leading up to Christmas. In some cases, hourly records were also reached. One of the protagonists behind these prices is gas, which also recorded an all‑time high in the penultimate week of the year. High CO2 prices also favoured the uptrend, in a week in which demand declined across the board and wind energy and solar energy production increased in some markets

In the week of December 20, solar energy production increased more than double that registered in the previous week in the German market. On the contrary, in the rest of the markets analysed at AleaSoft Energy Forecasting, production fell between 25% in the French market and 64% in the Portuguese market.

For the week starting Monday, December 27, AleaSoft Energy Forecasting‘s solar energy production forecasts indicate an increase in production with this technology in the markets of Spain and Italy. On the contrary, a production contraction is expected in the German market. 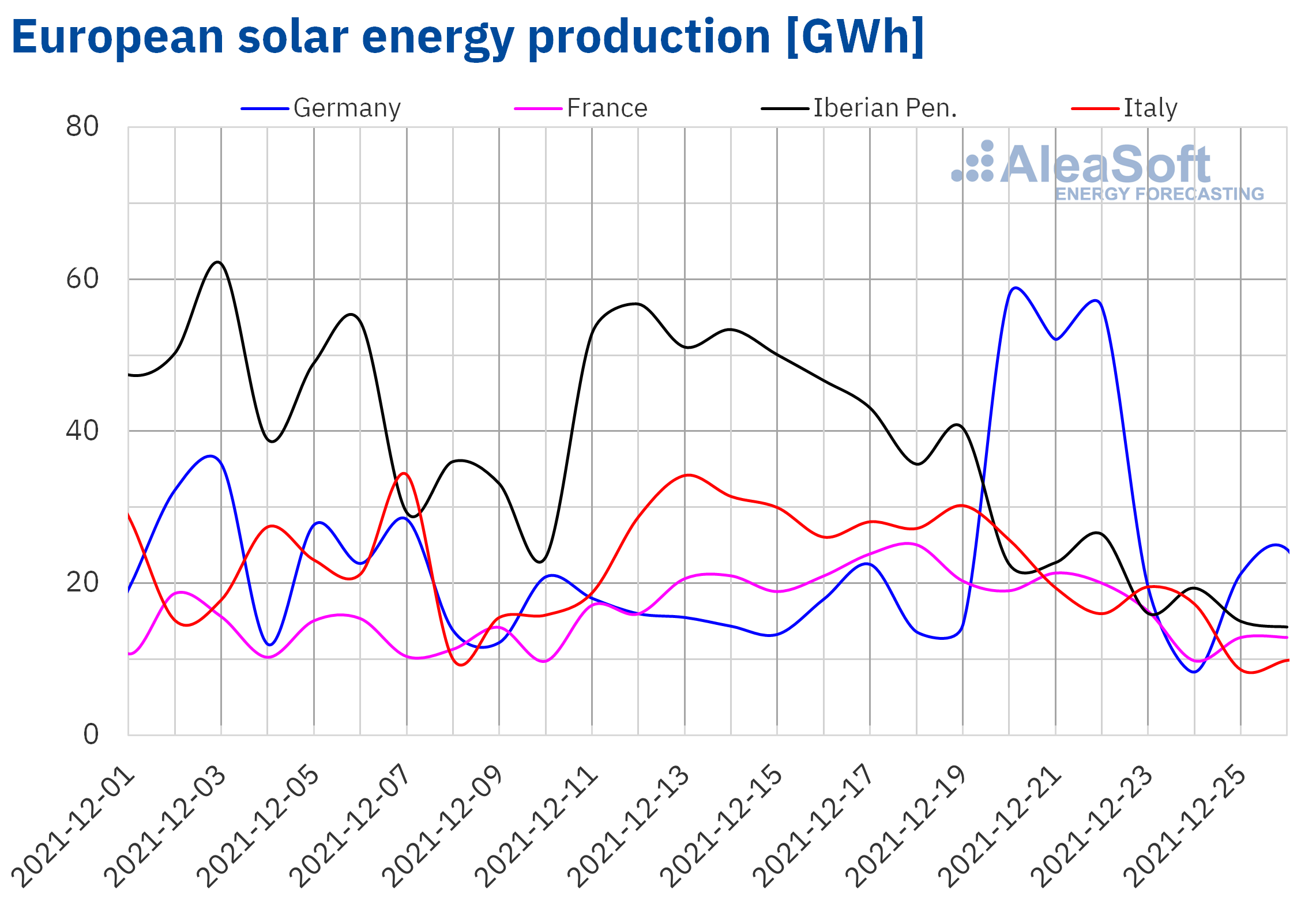 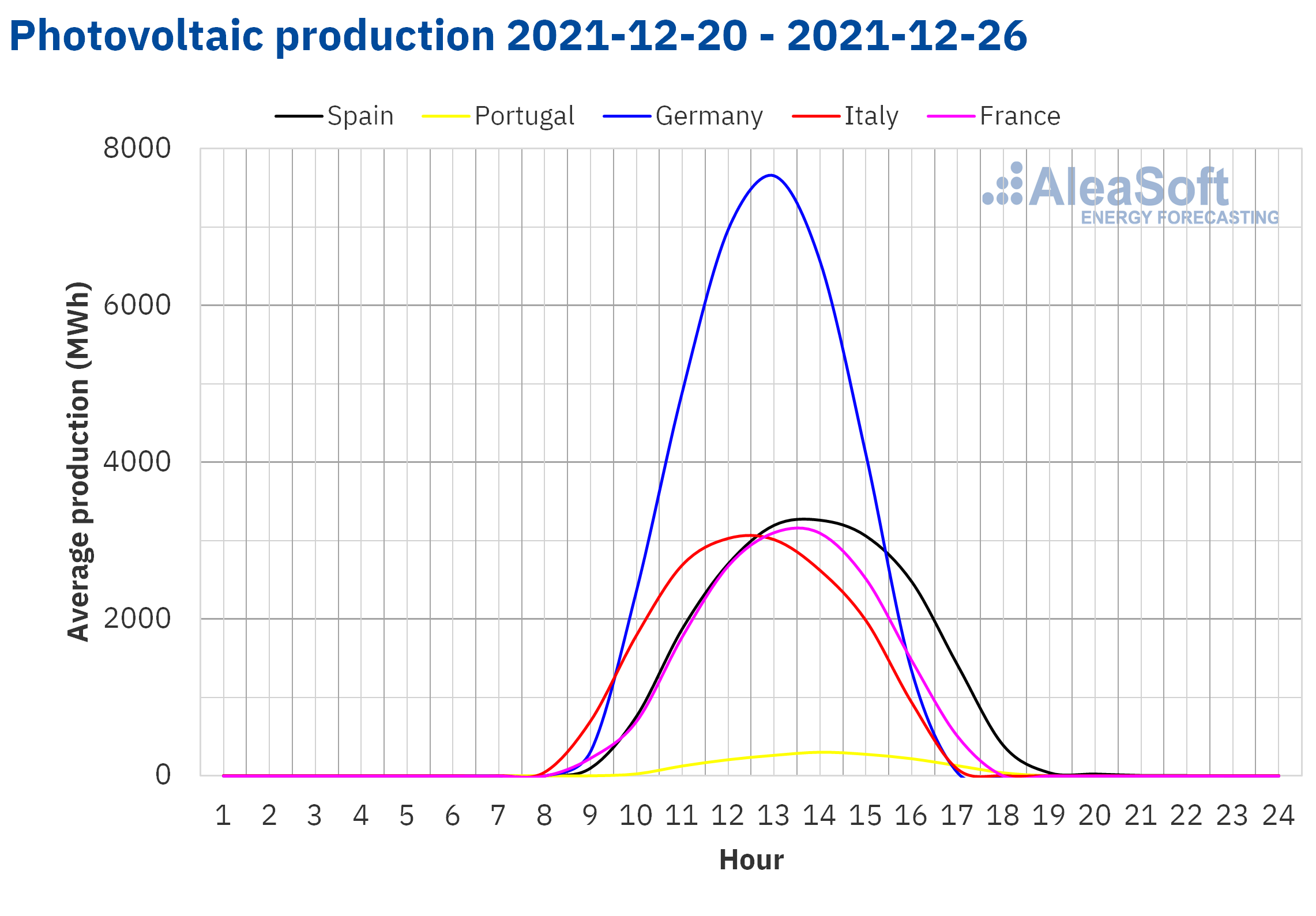 Wind energy production increased 52% in the Iberian Peninsula and 4.4% in the French market during the fourth week of December, compared to the week before. On the contrary, production with this technology fell 40% in the Italian market and 18% in the German market. 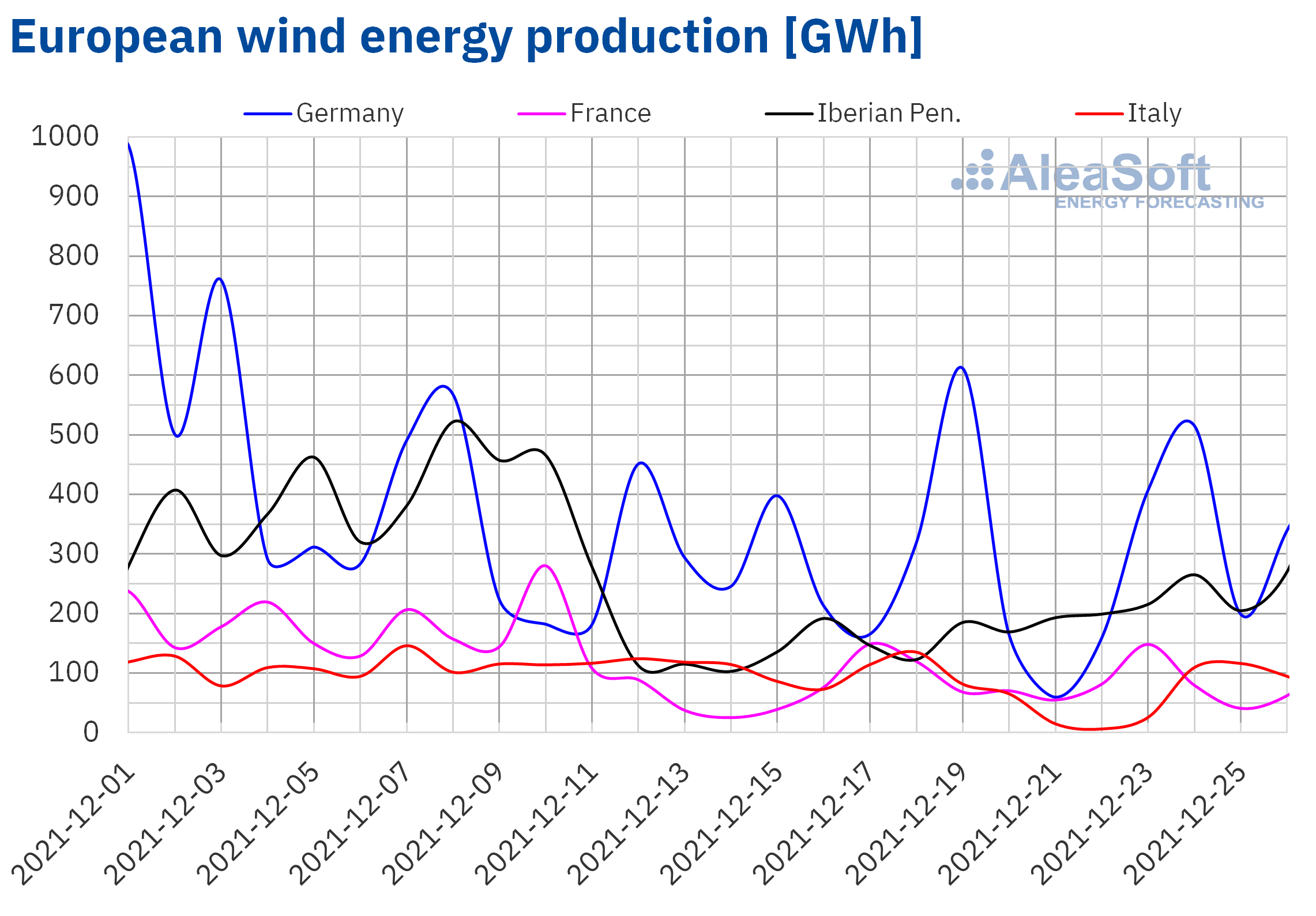 During the week of December 20, electricity demand fell in weekly terms in all the European markets analysed at AleaSoft Energy Forecasting. Although in some countries such as France, during the first days of the week values with an upward trend were registered, reaching their daily maximum since more than 10 months, specifically by marking 1820 GWh on December 22, a figure that was not exceeded since on February 12 when a daily demand of 1887 GWh was registered. However, as the last days of the week approached and on vespers of Christmas, demand fell in all markets, so that total demand for the week ended up being lower than that of the week of December 13 in all the analysed markets.

The largest decrease occurred in Italy, with a drop of 12%, closely followed by the decrease registered in Portugal, of 11%. France was the country with the lowest variation in weekly demand, falling by 2.6%. 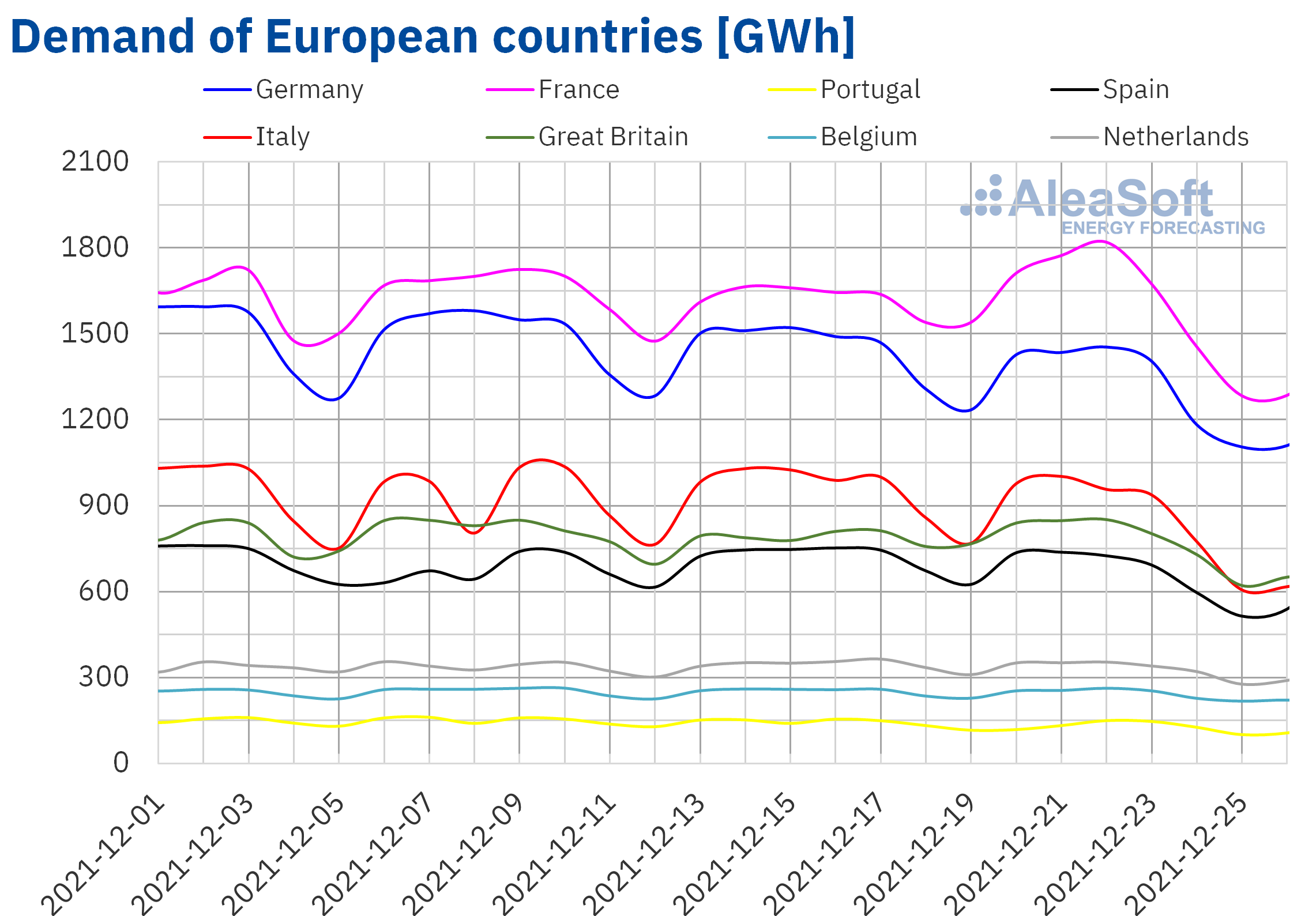 AleaSoft Energy Forecasting‘s electricity demand forecasts suggest that in general terms at the European level during the week of December 27, the downward trend will continue in most markets. This behaviour is expected both by the effects of the holidays from year‑end to the end of the week, and by a forecast of slightly less cold temperatures.

In the week of December 20, the prices of almost all European electricity markets increased compared to the previous week. The highest increase was registered in the Nord Pool market of the Nordic countries and was 95%, although the weekly average of this market, of €201.19/MWh, was the lowest of all the markets analysed. The percentage increases in the other markets where prices increased were much more moderate, ranging between 2.5% of the MIBEL market of Spain and Portugal and 6.8% in the EPEX SPOT market of Germany. The only market in which prices fell was the UK N2EX market, which registered a 2.5% decrease, but even so, the highest weekly average price of the week, of €350.12/MWh, was reached in this market.

Almost all the analysed electricity markets registered daily price records in the penultimate week of 2021. On December 21, the Nord Pool and EPEX SPOT markets of the Netherlands, Germany and Belgium registered the highest price in their history, of €309.78/MWh, €429.84/MWh, €431.98/MWh and €432.99/MWh respectively. In the IPEX market in Italy, the historical maximum daily price so far, of €437.94/MWh, was registered on December 22. That same day, the EPEX SPOT market in France reached the second highest price traded on the spot market to date, at €452.94/MWh. In the case of Spain and Portugal, the €383.67/MWh on December 23 represents the new daily price record in the Iberian market.

During the weekend, prices fell compared to those of the first part of the week and daily values were between €140/MWh and €230/MWh.

Although electricity demand decreased in all markets and wind and solar energy production was higher than in the previous week in some cases, electricity market prices were largely influenced by gas prices, which registered highs records again during the penultimate week of the year and those of CO2 that stood high. 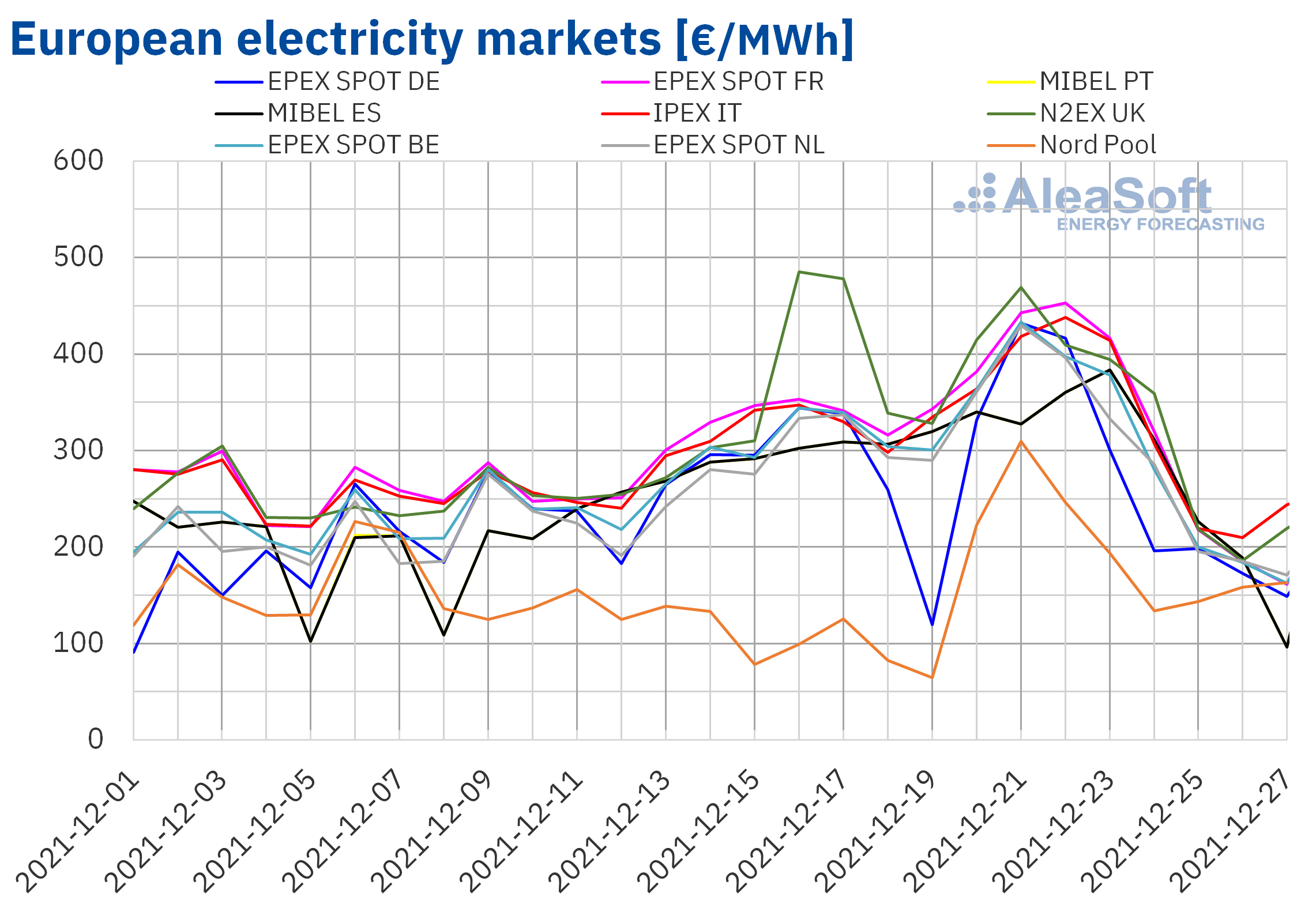 The electricity futures prices for the next quarter had a heterogeneous behaviour in the European markets analysed at AleaSoft Energy Forecasting. If the settlement prices of the sessions of December 17 and December 24 are compared, it is observed that at the end of the fourth week of the month, the prices of electricity futures for Q1 2022 fell in all markets except in the Iberian and italic peninsulas. It was precisely the EEX market of Italy where the lowest price increase was registered, with a growth of 0.3%. On the other hand, the EEX market of Spain marked the largest increase, with a 5.9% difference. At the other extreme is the ICE market of the United Kingdom, with a decrease of 15%. The smallest price reductions were recorded in the EEX market in France and the NASDAQ market of the Nordic countries, both with a 0.4% decrease, although in the latter the session being analysed is December 23rd.

In the case of electricity futures prices for the next calendar year 2022, the behaviour was different. Price increases were registered in most of the analysed market. The exception was the ICE market of the Nordic countries, where there was a decrease of 3.1%. The ICE market of the United Kingdom was where the prices of this product remained with the least variation between the analysed dates, with a difference of 0.2%. Also in this product, the EEX market of Spain was the one with the highest price increase, with a 22% increase, followed by the OMIP market of Spain and Portugal, with a 19% increase in both countries.

The TTF gas futures in the ICE market registered a new historical price record during the penultimate week of the year. On Tuesday, December 21, the futures for the Front Month settled at €180.27/MWh and during that day’s session they reached €187.79/MWh, the highest price ever recorded. But at the end of the week, prices fell significantly and settled on Friday the 24th 36% below the settlement on Wednesday. On Monday, December 27, the market also opened with falls that reached about 20%.

The falls in gas futures prices have also dragged down coal futures and CO2 emission rights. The API 2 coal futures for the Front Month in the ICE market fell 12% during the week, driven by gas and by the news that Russia is increasing its production of this mineral.

On the other hand, the CO2 emission rights futures in the EEX market for the reference contract of December 2022 continue at historically high levels, but with a downward trend in the short term. During the week of December 20, prices followed the pattern of gas futures, reaching the maximum of the week on Tuesday, with €80.92 per ton, and ended up falling by 8.0%.

The prices of Brent oil futures for the Front‑Month in the ICE market remained in the lateral trend of the last three weeks, between the levels marked by the long‑term downtrend and the mid‑term uptrend. During the week of December 20, prices rose 6.5%, closing Friday’s session at $76.14 a barrel. The week began with falls in prices in the early hours of Monday due to fears of a significant drop in demand due to the impact of the Omicron variant of the coronavirus that caused the cancellation of thousands of flights, but that fear was offset by the fall in crude oil reserves in the United States which was higher than expected. 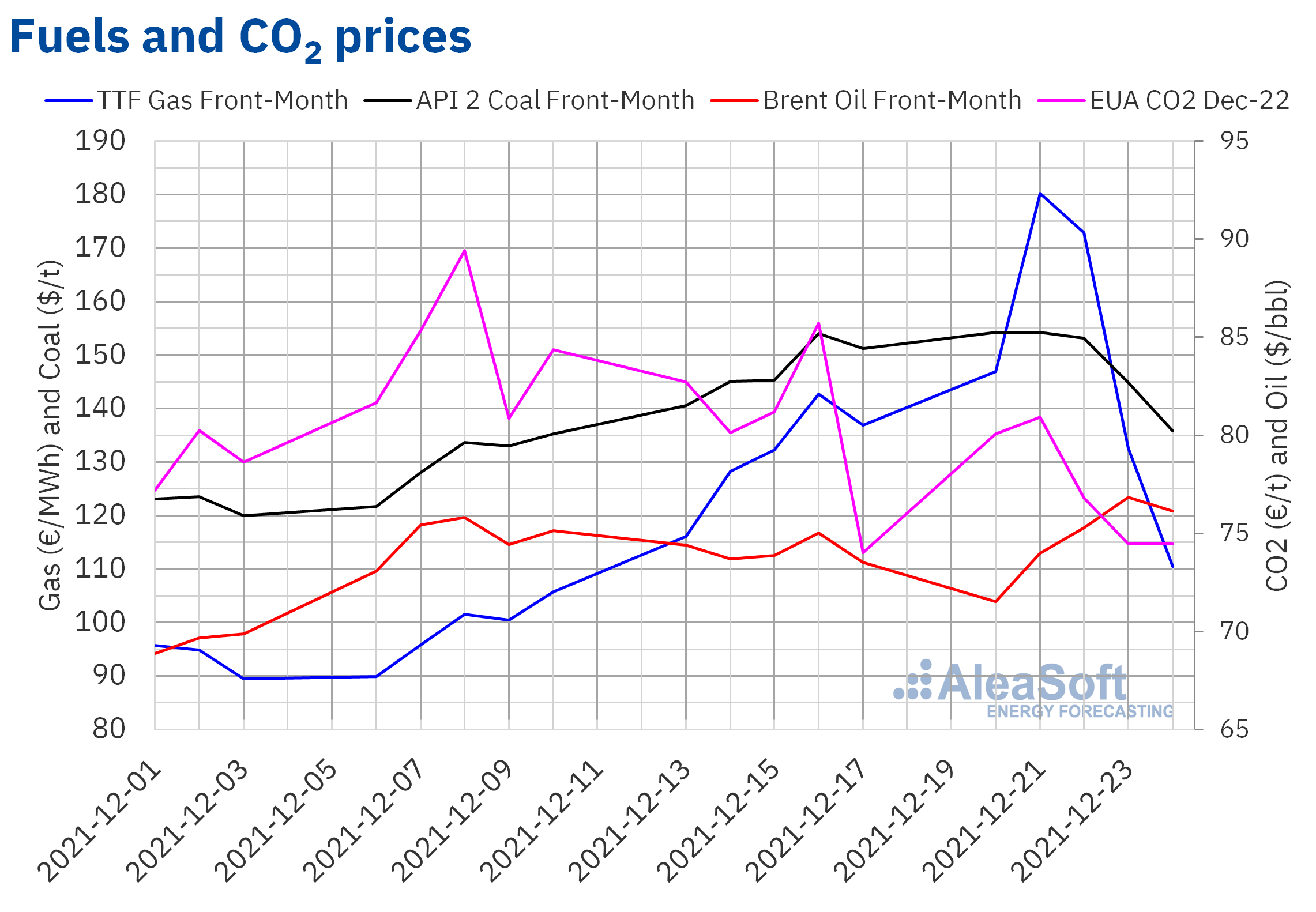 Faced with this scenario of macrovolatility that is being experienced in the energy markets, it is essential to have reliable and consistent electricity market prices forecasts, as well as the basis of a robust energy purchase and sale strategy that protects against adverse market situations, as well as for the elaboration of financial models for new renewable energy projects.

AleaSoft Energy Forecasting organizes a series of monthly webinars to analyze the evolution of energy markets in Europe and their prospects. It is the ideal periodic event for professionals in the energy sector to stay informed of current events in the sector. The next edition will take place on January 13 and will include the participation of invited speakers from PwC Spain to analyze the impact of the current regulatory situation on the development of PPAs, both offsite and onsite, and on the renewable energy projects financing.