AleaSoft Energy Forecasting, November 29, 2021. Prices of all European electricity markets rose in the fourth week of November and the weekly average, above €200/MWh in most of them, was the highest in the history in almost all markets. There are several factors that led to the increases, despite the fact that wind energy production increased in most markets: increased demand due to the drop in temperatures, lower nuclear energy contribution in some countries and high gas and CO2 prices, the latter registering records.

In the fourth week of November, the solar energy production increased by 43% in the German market compared to the previous week. On the contrary, in the rest of the European markets analysed at AleaSoft Energy Forecasting, the generation with this technology decreased in the same period. In the Iberian market, the production fell by 22%, while in the markets of France and Italy the decreases were 16% and 8.4% respectively.

For the week of November 29, the AleaSoft Energy Forecasting’s solar energy production forecasting indicates a recovery in the Spanish and Italian markets compared to the previous week. However, a lower production with this technology is expected in the German market. 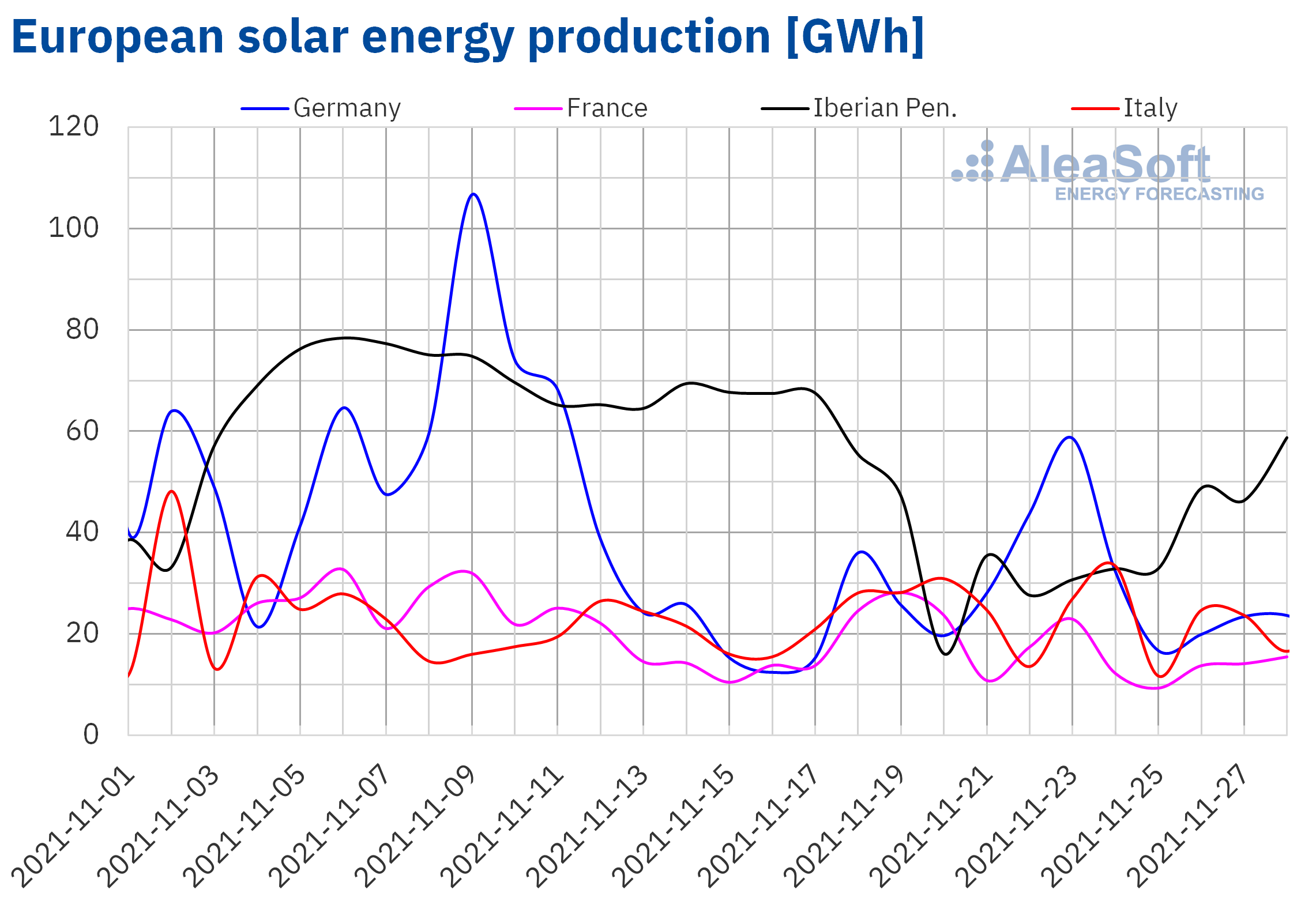 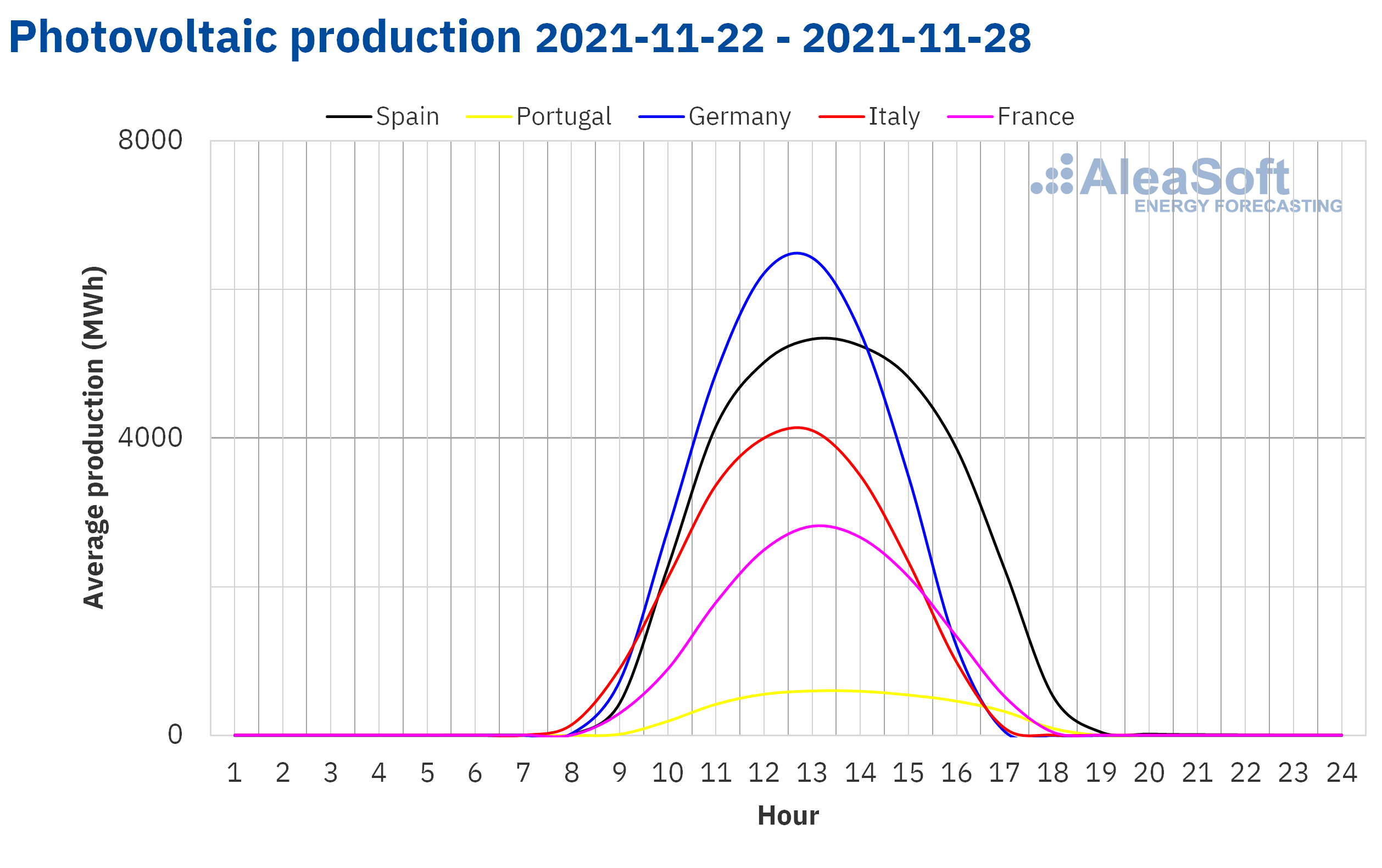 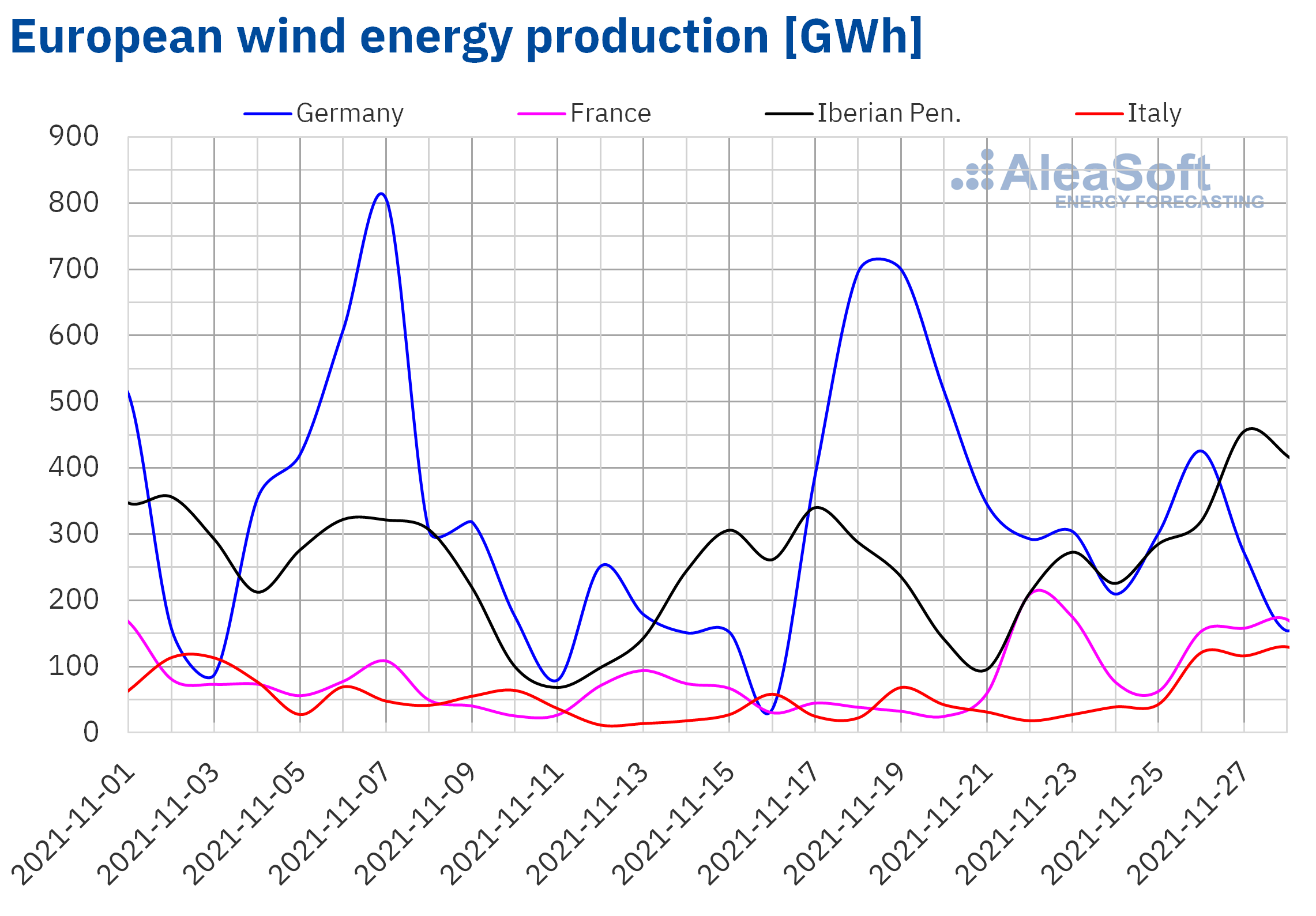 The electricity demand increased in a generalised way in the European electricity markets during the week of November 22 compared to the previous week. The main factor behind the rise was the drop in average temperatures in most markets, which fell by more than 3.5 °C in the markets of Great Britain, the Netherlands, Germany and Belgium. The most significant increases in demand were registered in France and Great Britain, with values of 9.4% and 9.1%, respectively. Behind in this list of increases were the markets of Portugal, the Netherlands and Spain, where the demand rose by 6.4%, 4.7% and 4.5%, respectively. In the rest of the markets the increases were lower than 4.0%.

For the week of November 29, the demand is expected to continue increasing in most of the electricity markets of Europe, according to the AleaSoft Energy Forecasting‘s demand forecasts. 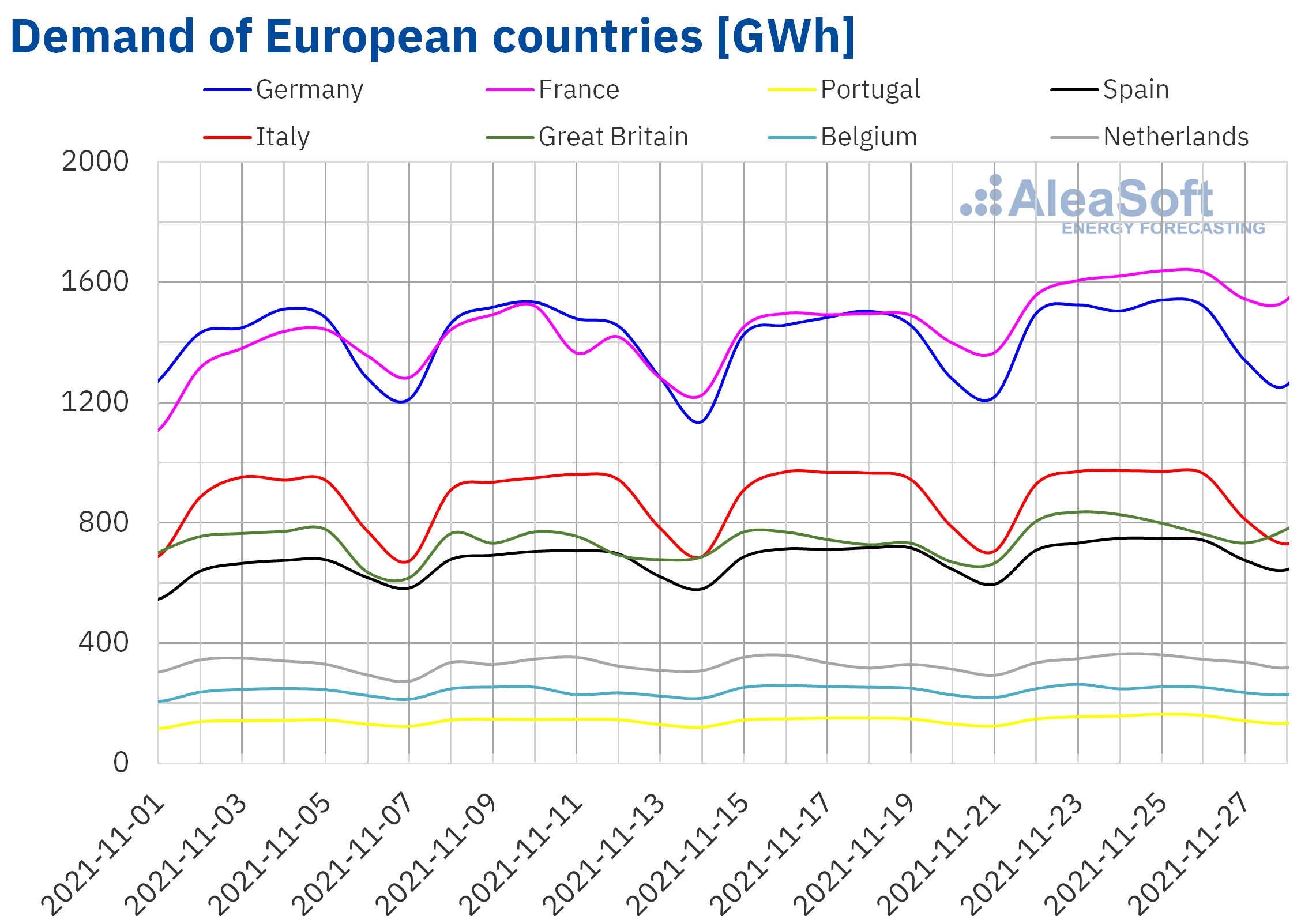 In the fourth week of November, almost all analysed markets reached weekly average prices above €200/MWh. The exception was the Nord Pool market, which had the lowest average, of €122.93/MWh. On the other hand, the highest weekly average price, of €259.93/MWh, was that of the EPEX SPOT market of France. In the rest of the markets, prices were between €209.66/MWh of the market of the Netherlands and €256.29/MWh of the IPEX market of Italy. These weekly averages were historical records in all markets, except in the N2EX market of the United Kingdom. In this market, the price of the week of November 22 was the second highest, after the maximum of the week of September 13, of £267.87/MWh. 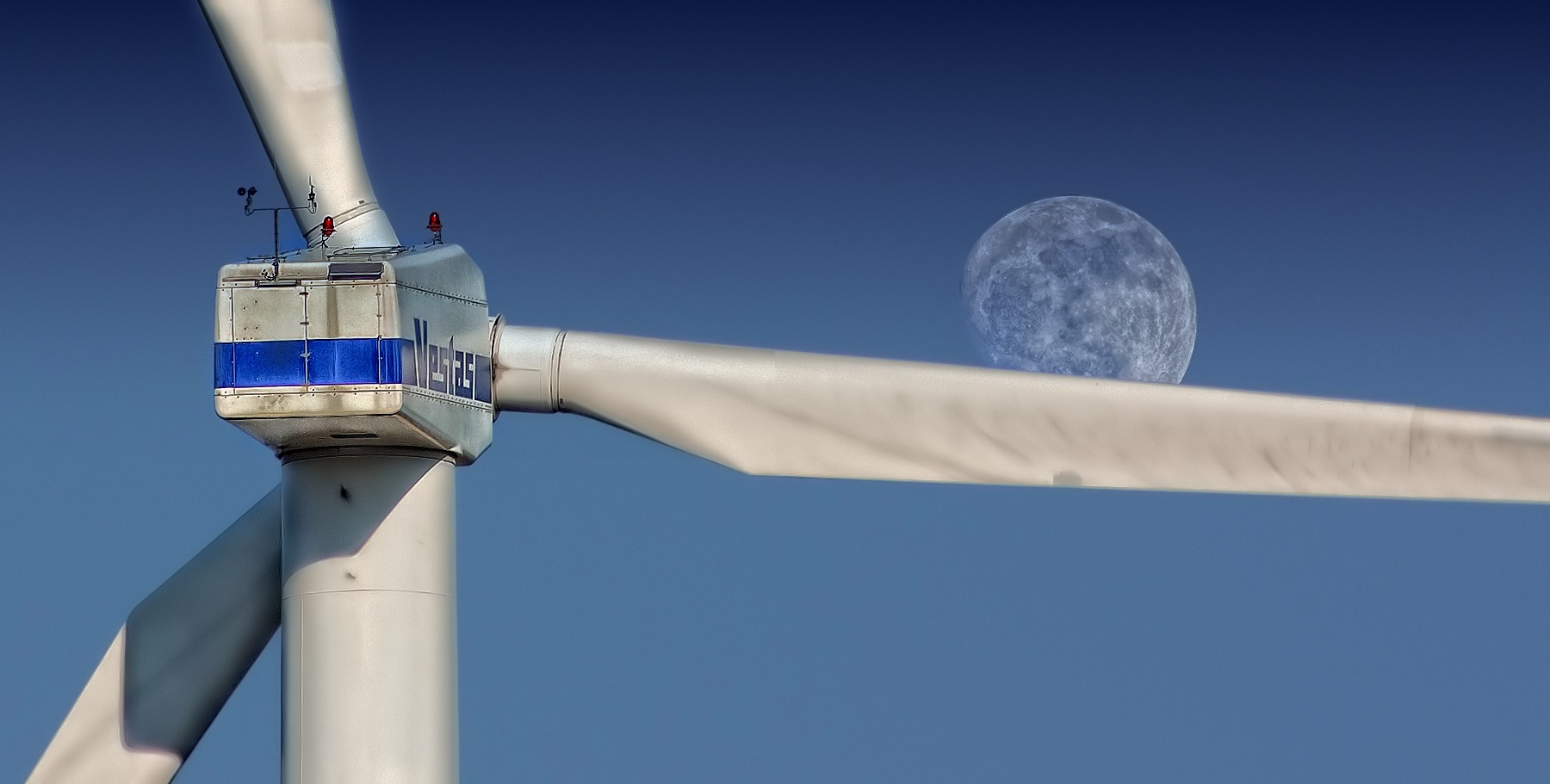 AleaSoft Energy Forecasting’s price forecasts indicate that in the week of November 29, prices may continue to increase in most European markets. But, in the case of Germany and Italy, prices may fall favoured by the increase in wind energy production in these markets. 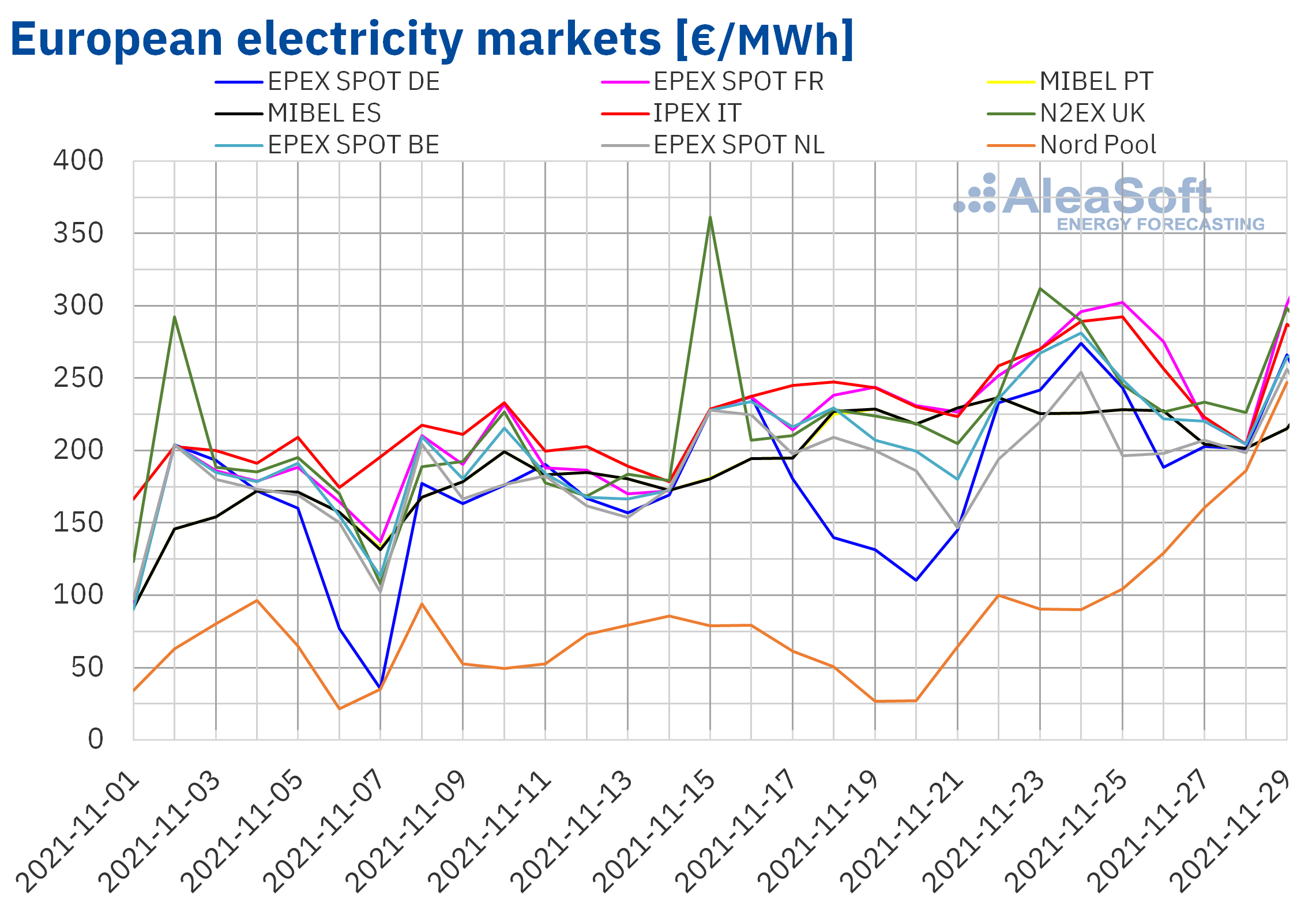 Once again, there were increases in prices of the last market session in electricity futures for the first quarter of 2022. If the settlement prices of Friday, November 26, are compared with those of Friday, November 19, they increased in all European markets analysed at AleaSoft Energy Forecasting. The EEX market of France led the rises, with a 23% increase and the second largest increase was the ICE market of the United Kingdom, with a 12% increase. The ICE market of the Netherlands was the one in which the settlement price changed the least between these sessions, with a rise of 2.4%.

Compared to the yearly product of 2022, there was also a general increase and it was also led by the EEX market of France, with 13%. Likewise, the ICE market of the Netherlands had the lowest percentage increase, of 3.5%. However, in absolute terms the ICE market and the NASDAQ market of the Nordic countries were those with the lowest increase, with a difference of €2.10/MWh and €2.39/MWh respectively between the analysed sessions.

The increase in COVID‑19 infections in Europe and the fact that more and more countries adopt confinement measures to try to stop the spread of the disease continued to exert its downward influence on prices in the fourth week of November. The news about the detection of the new Omicron variant of the coronavirus favoured the fall in prices of Friday, November 26. The restrictions adopted by many governments to try to prevent the arrival of the new variant in their countries may affect the recovery of the demand.

As for TTF gas futures prices in the ICE market for the Front‑Month, they started the fourth week of November with decreases. The settlement price of Monday, November 22, of €84.02/MWh, was the lowest of the week, but it was still 5.1% higher than that of the previous Monday. Later, prices recovered and on Wednesday, November 24, the maximum settlement price of the week, of €93.98/MWh, was reached. In this case, the price was 1.1% lower than that of the same day of the previous week. In the last sessions of the fourth week of November, prices fell again to €87.77/MWh of Friday, November 26. News about the new variant of the coronavirus favoured these price declines.

Regarding CO2 emission rights futures in the EEX market for the reference contract of December 2021, during the fourth week of November they registered settlement prices above €69/t. On Thursday, November 25, the maximum settlement price of the week of €74.46/t was reached, which was a new price record for these futures. 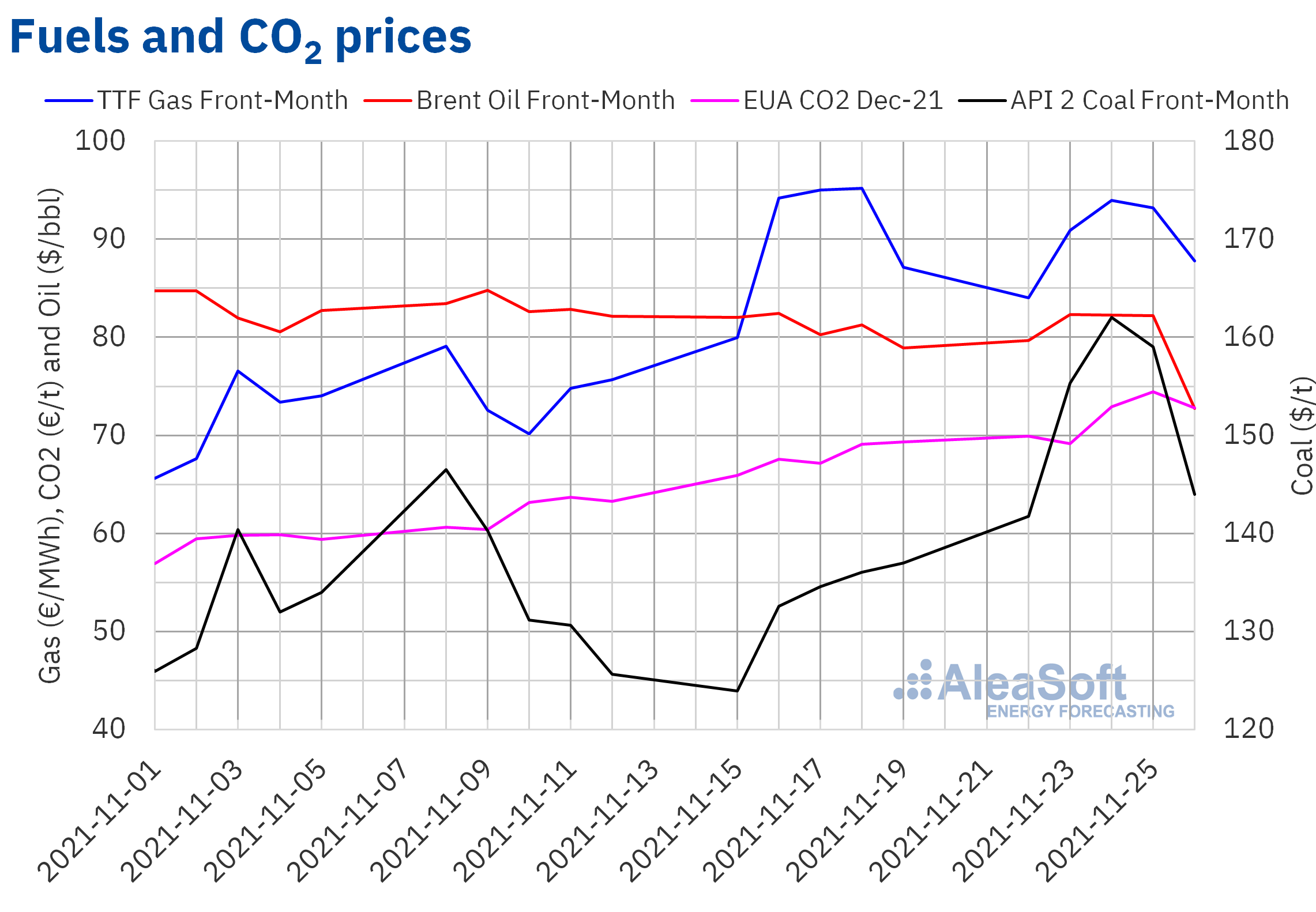 In the current scenario of high prices in the spot and futures electricity markets, the need to have short‑ and mid‑term market prices forecasts that allow detecting opportunities when defining and carrying out the energy purchase and sale strategy and in the bids preparation becomes more evident.

The prospects for European energy markets from 2022 will be one of the topics that will be analysed at the next AleaSoft Energy Forecasting’s webinar, which will be held on January 13, 2022. This webinar will be the continuation of the one held on January 14, 2021 and, as on that occasion, there will be the participation of speakers from PwC Spain to analyse how the regulatory and electricity market situation impacts the development of PPA, both off‑site and on‑site.

On December 1 and 2, the V National Renewable Energy Congress of the Asociación de Empresas de Energías Renovables (APPA) will be held, of which AleaSoft Energy Forecasting is a sponsor. Within the framework of this event, on the 1st the table “Volatility in wholesale markets: present and future” will be held, in which Antonio Delgado Rigal, CEO of AleaSoft Energy Forecasting, will participate, along with Yolanda Cuéllar, Director of Market Operation at OMIE, Olivier Potart, Head of Power Price Forecasting at DNV and José Ángel Castro, Director of Energy Engineering and Energy Management at ENCE.