AleaSoft, September 28, 2020. The European electricity markets prices fell in the fourth week of September despite the peaks of the beginning of the week. The general increase in wind energy production is the main cause of this decline, although other factors also favoured it, such as the drop in demand in most markets, the increase in Iberian solar energy production and a slight decrease in CO2 prices. The gas prices continued to recover with values above €11/MWh, at the level of January and February.

The fourth week of September ended with a solar energy production 27% higher than the previous week in the Iberian Peninsula. On the contrary, in the German market, the production with this technology decreased by 34% and in the markets of France and Italy it decreased by 30% and 21% respectively.

From September 1 to 27, the solar energy production increased compared to the same period of September 2019 in all the European markets analysed at AleaSoft. The largest increase in production was 46% and was registered in the Iberian Peninsula. In the German market it increased by 21%, while in the markets of Italy and France the production grew by 9.3% and 10% respectively.

For the week of September 28, the AleaSoft‘s solar energy production forecasting indicates that it will decrease in most of these markets. 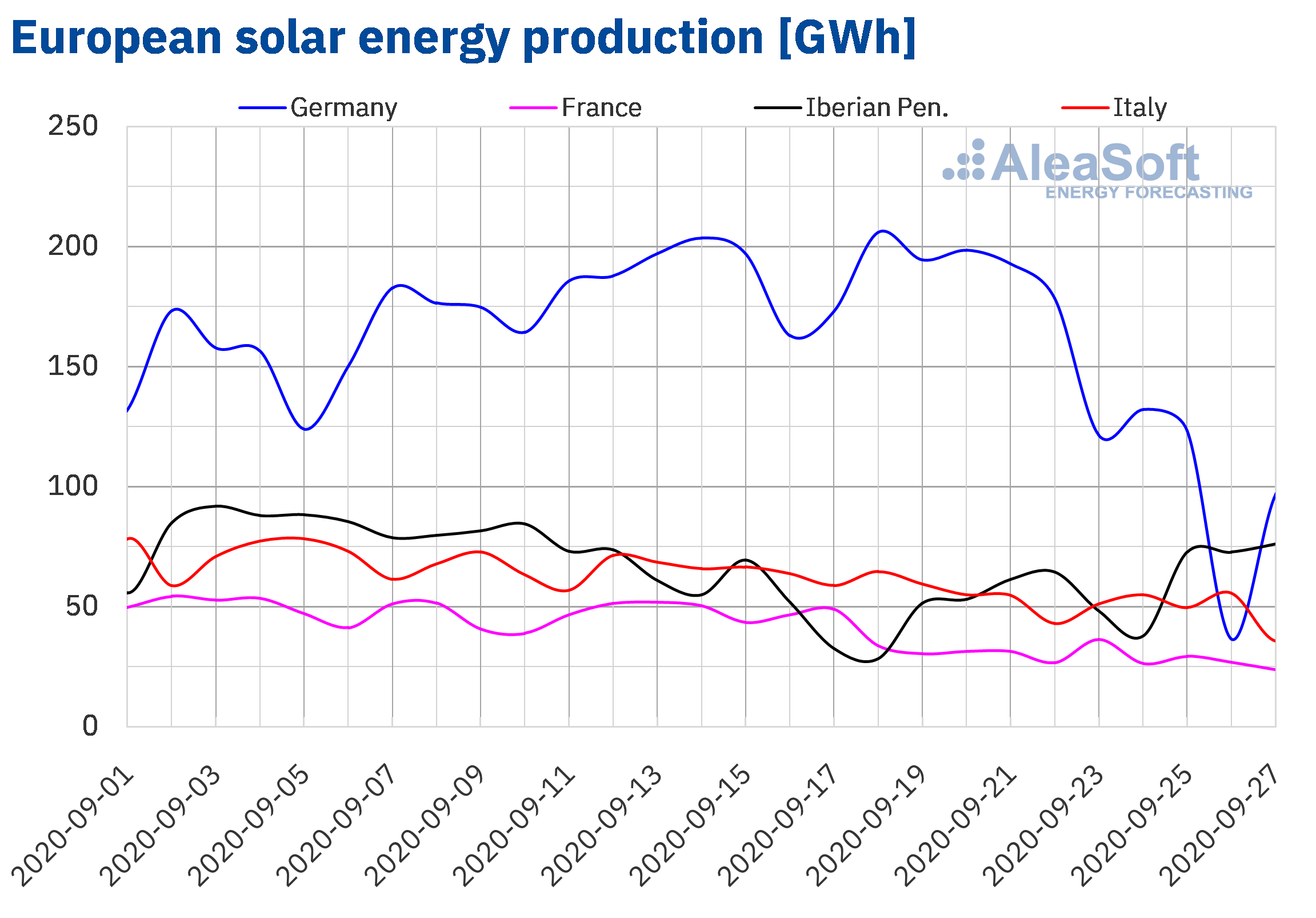 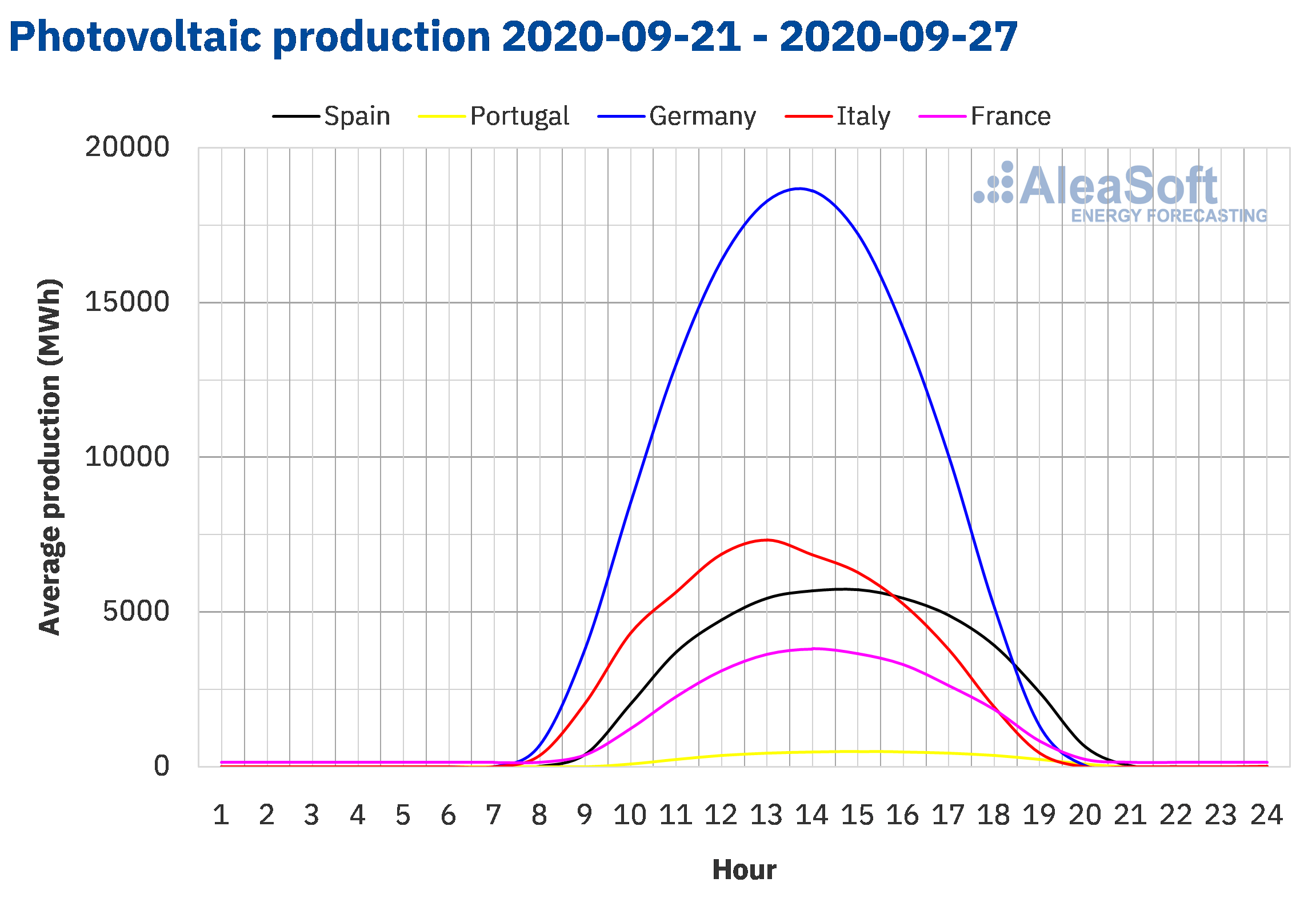 In the year‑on‑year analysis, the outlook was different, as there was a reduction in production in most of the markets analysed at AleaSoft during the first 27 days of September. In the Portuguese market it decreased by 19% and in the German market by 7.5%. In the French market there was a decrease of 5.9%, while in Italy the production with this technology decreased by about 1.0%. The exception was the Spanish market in which a slight increase of 0.8% was registered during this period.

For the week ending on Sunday, October 4, the AleaSoft‘s wind energy production forecasting indicates an increase in production in Germany. On the contrary, it is expected that in the rest of the markets it will decrease compared to that registered in the week of September 21. 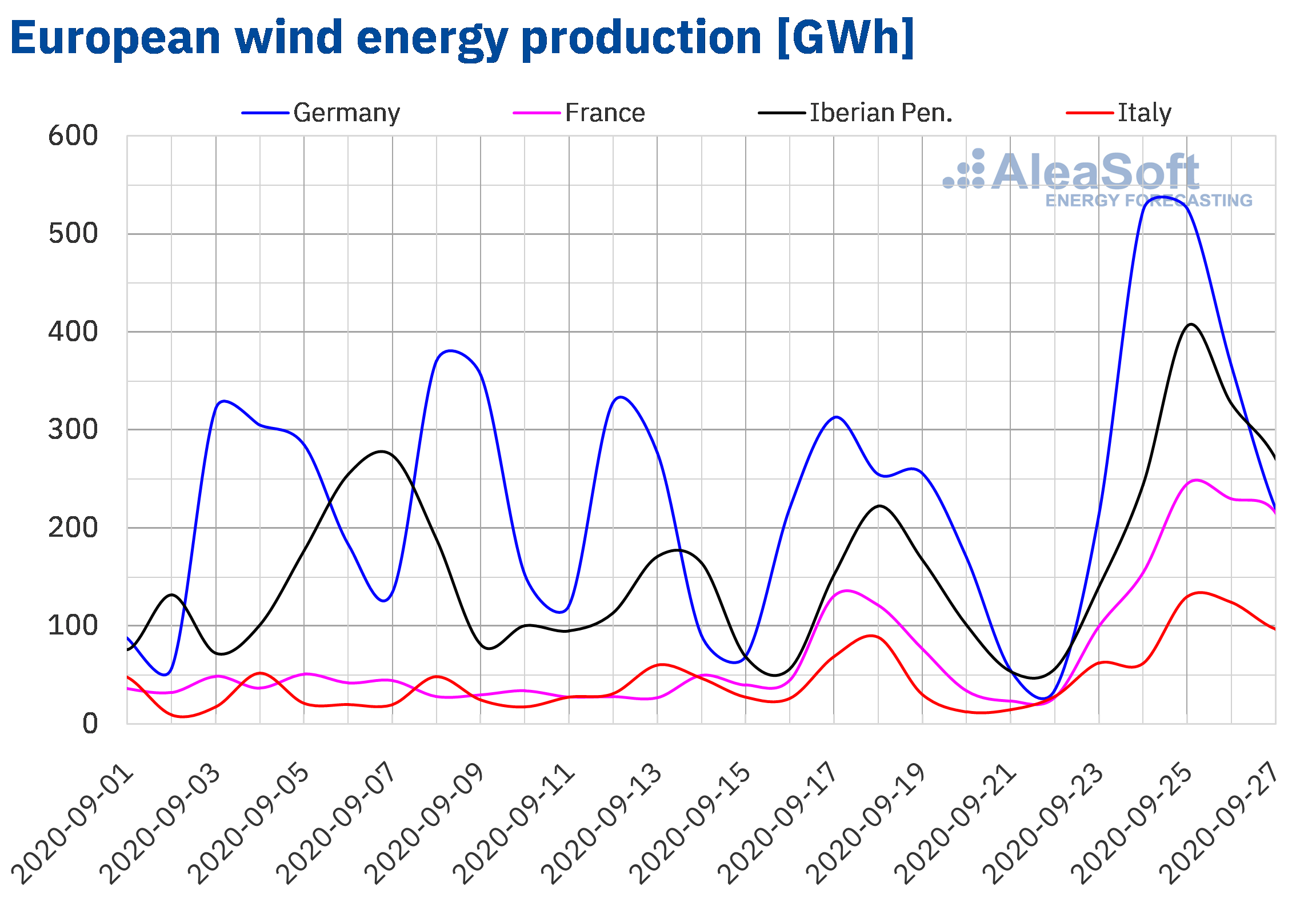 The electricity demand registered falls in most of the European markets during the week of September 21 compared to the previous one. These decreases were influenced by the general drop in average temperatures, which was up to 6.8 °C in the case of France. The most notable decrease was 7.4% in the Italian market, mainly due to the drop of more than 6 °C during the weekend. In the Spanish market, the 2.7 °C drop in average temperatures was the main factor in the drop in demand of 4.4%. In the markets of Portugal and Belgium, the decreases were 2.6% and 1.1%. On the other hand, there were some increases in the markets of Great Britain and Germany, which were 3.7% and 2.3% respectively. In France, the values were very similar to those of the previous week, with a slight increase of 0.2%.

The rises and falls in electricity demand can be analysed in more detail at the AleaSoft’s electricity markets observatories. 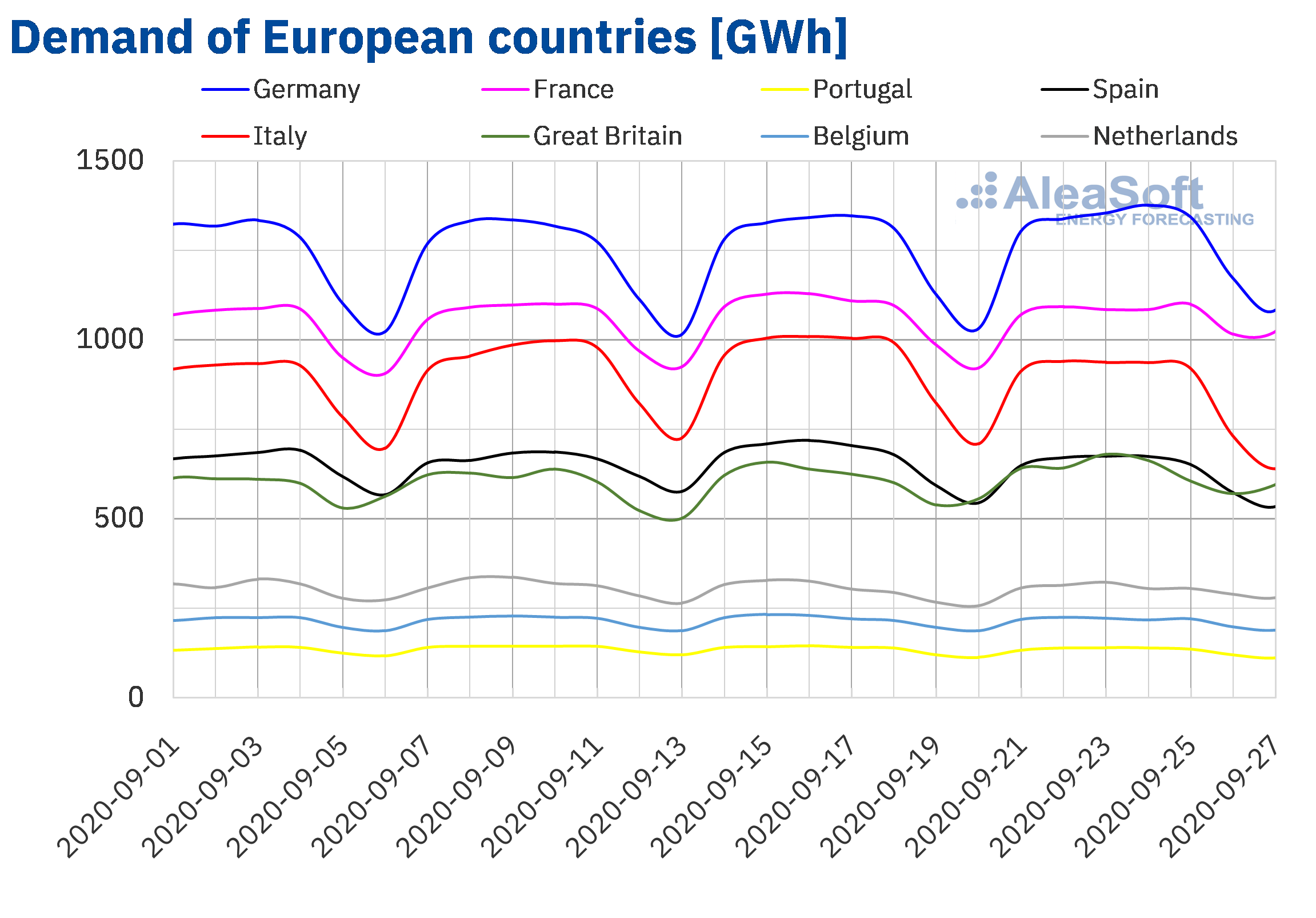 The week of September 21, the prices of all the analysed European electricity markets fell compared to those of the previous week. The market with the largest price drop, of 48%, was the Nord Pool market of the Nordic countries. On the other hand, the market with the lowest price drop, of 6.5%, was the N2EX market of Great Britain, followed by the IPEX market of Italy, with a decrease of 8.6%. In the rest of the markets, the price declines were between 11% of the EPEX SPOT market of Germany and France and 16% of the EPEX SPOT market of the Netherlands.

In the fourth week of September, weekly average prices above €40/MWh were reached in most of the analysed European electricity markets. The highest, of €48.10/MWh, was that of the IPEX market of Italy, followed by that of the British market, of €47.90/MWh. On the other hand, in other markets the weekly averages were slightly lower than €40/MWh. This was the case of the EPEX SPOT market of the Netherlands and the MIBEL market of Spain and Portugal, with prices of €39.19/MWh, €37.92/MWh and €37.90/MWh respectively. But the market with the lowest average price, of €8.78/MWh, was the Nord Pool market. 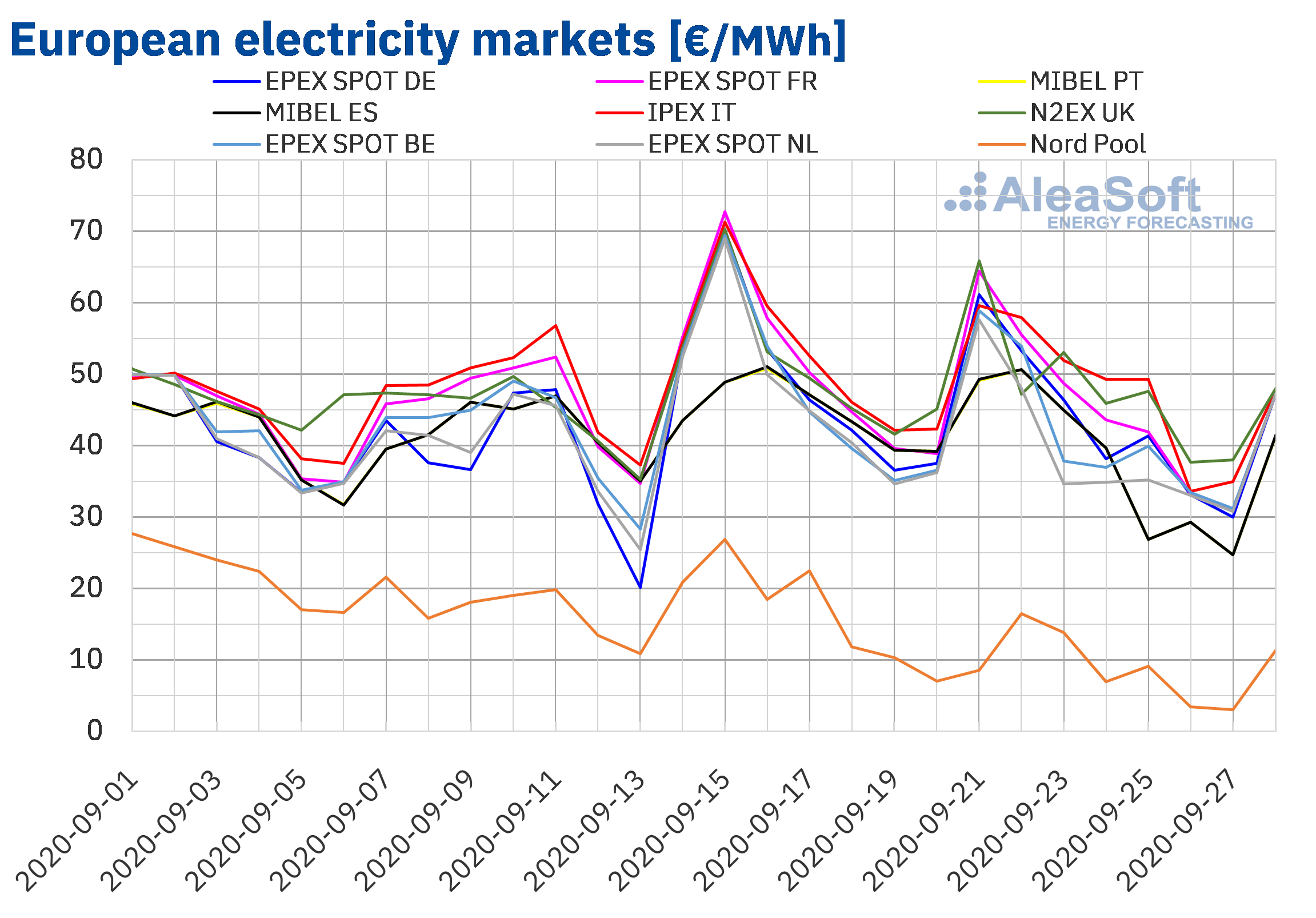 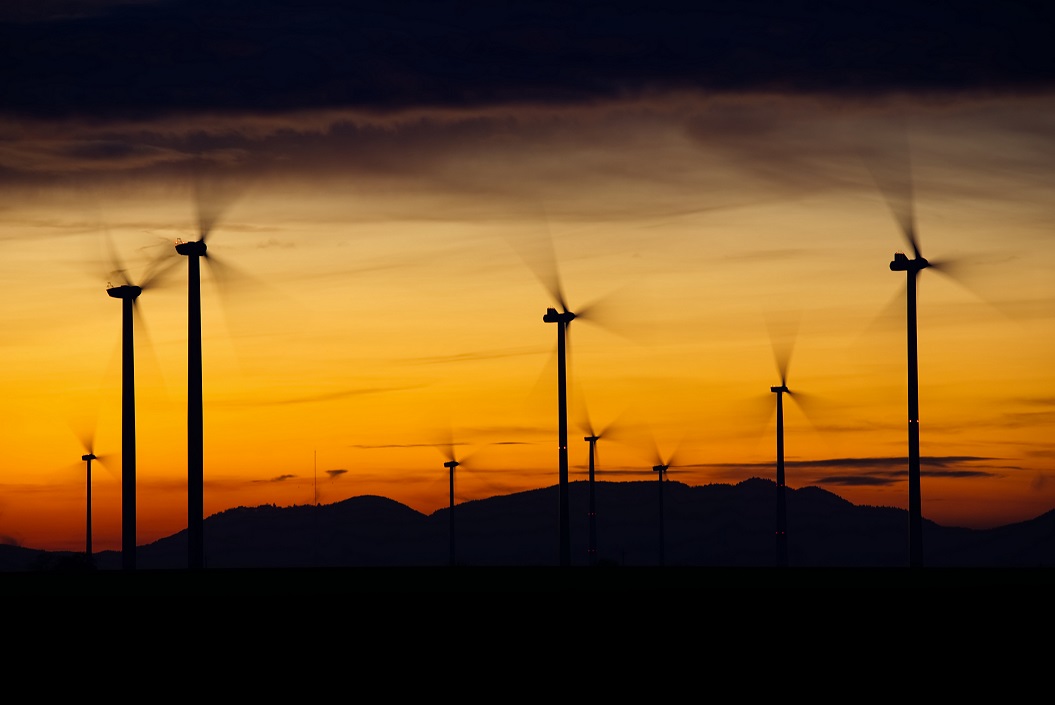 The AleaSoft‘s price forecasting indicates that the week of September 28 there will also be price declines in most of the analysed European electricity markets.

During the fourth week of September, the European electricity futures markets registered a mostly downward behaviour for the product of the last quarter of the current year. The prices only increased in the ICE market and the NASDAQ market of the Nordic countries and in the EEX market of Great Britain, although the latter by only 0.1%. The British ICE market ended the week with a price identical to the settlement price of the session of September 18. In the rest of the markets, the decreases were between 1.9% of the EEX market of Germany and 4.4% of the EEX market of France.

As for the futures for the next calendar year 2021, the behaviour was a little more homogeneous. In this case, the prices of Great Britain were reduced in both the EEX market and the ICE market. Only the ICE and NASDAQ markets of the Nordic countries opposed the decline, with increases of 3.5% and 3.4% respectively. The EEX market of Germany was the one with the greatest decline, of 2.9%. It was followed closely, with 2.8%, by the EEX market of France and the ICE market of Belgium and the Netherlands. The smallest decrease was registered in the OMIP market of Spain and it was 1.5%.

The Brent oil futures prices for the month of November 2020 in the ICE market began the fourth week of September with a decrease of 4.0% compared to the last session of the previous week. Thus, the settlement price of Monday, September 21, was $41.44/bbl. During the rest of the week, the prices recovered slightly, but they did not reach $42/bbl. The maximum settlement price of the week, of $41.94/bbl, was registered on Thursday, September 24, and it was 3.1% lower than that of the previous Thursday.

Several factors threaten to exert a downward influence on the Brent oil futures prices at this time. On the one hand, the increase in COVID‑19 cases and the restrictions on mobility that may be imposed to contain the spread of the coronavirus, in addition to an increase in trade tensions between China and the United States, might reduce the demand. On the other hand, the recovery of the production in Libya, the possibility that Iraq will not comply with the production levels agreed by the OPEC+ and the increase in production in the United States, Iran and Russia would contribute to a higher level of supply. However, this week there could be a strike in the Norwegian oil sector, which would lead to a reduction in its production.

As for the TTF gas futures in the ICE market for the month of October 2020, they began the fourth week of September with price increases. On Wednesday, September 23, the maximum settlement price of the week, of €12.02/MWh, was reached. This was 6.2% higher than that of the previous Wednesday and the highest since the second half of February. By contrast, on Thursday the settlement price fell by 3.2%. But on Friday it recovered to €11.67/MWh.

Regarding the TTF gas prices in the spot market, they started the fourth week of September with an upward trend. On Thursday, September 24, the maximum index price of the week, of €11.70/MWh, was reached, which was also the highest since those registered in the first half of January. But, in the last days of the week, the prices fell and the index price of September 26 and 27 was €11.32/MWh.

As for the CO2 emission rights futures prices in the EEX market for the reference contract of December 2020, in the fourth week of September they were lower than those of the same days of the previous week, but they remained above €26/t. The maximum settlement price of the week, of €27.85/t, was registered on Tuesday, September 22. 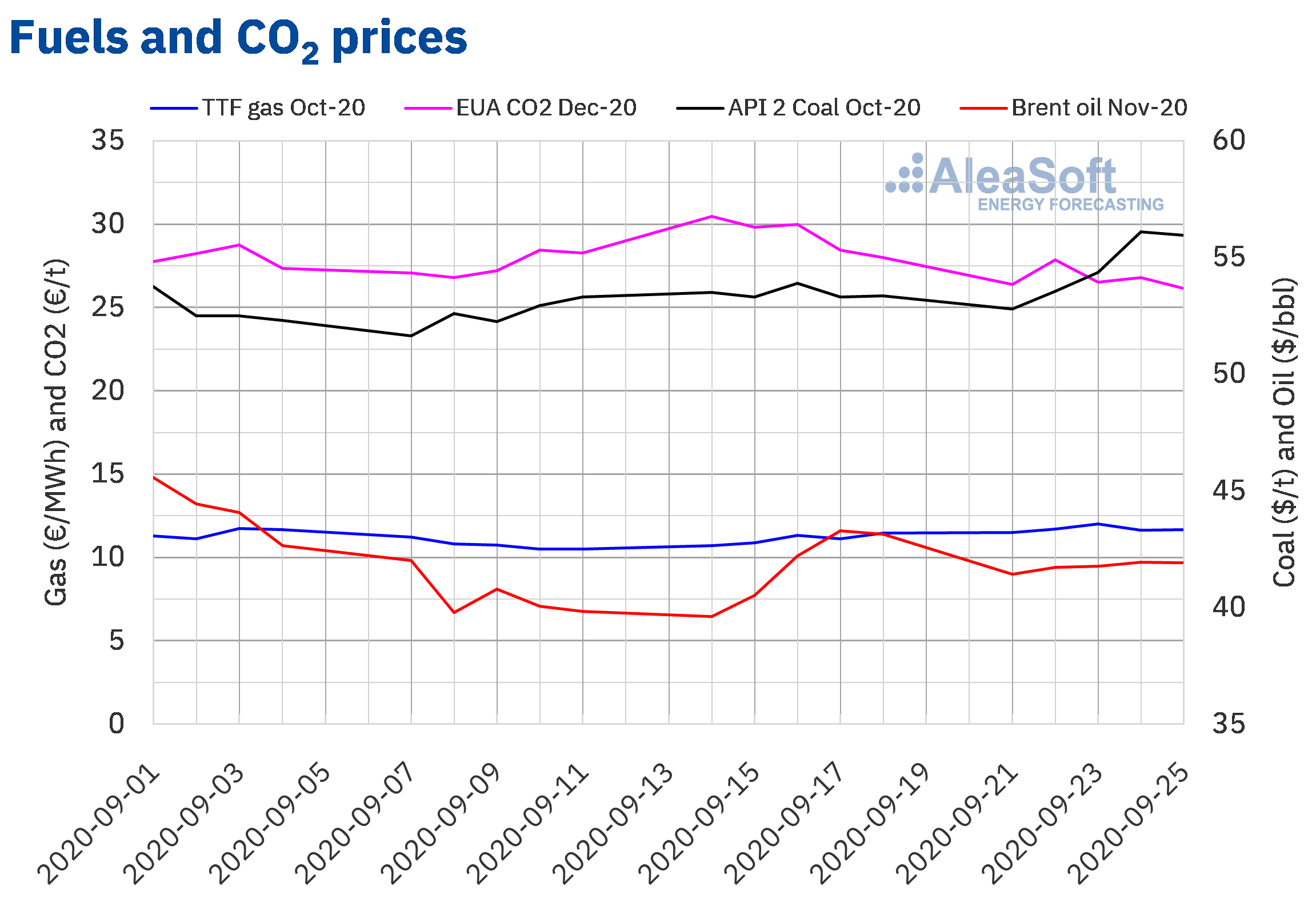 The second part of the webinar “Energy markets in the recovery from the economic crisis” that will take place at the end of October, on the 29th, is being organised at AleaSoft. On this occasion, the topics analysed in the first part of the webinar will continue to be deepened, taking into account how the COVID‑19 pandemic progressed after the start of the school year and during the first part of the fall in the northern hemisphere, as well as the uncertainty that exists about when and how the exit of the economic crisis will happen. The content of the webinar includes aspects such as the evolution of the energy markets in the economic recovery, the financing of renewable energy projects and the importance of the forecasting in the audits and the portfolio valuation. On this occasion, there will be the presence of two invited speakers from the consulting firm Deloitte, Pablo Castillo Lekuona, Senior Manager of Global IFRS & Offerings Services and Carlos Milans del Bosch, Partner of Financial Advisory.

At AleaSoft, the mid and long‑term price curves of the main European electricity markets are periodically updated, and they take into account the most up‑to‑date data on the evolution of the economy, as well as the exit scenarios from the economic crisis. This forecasting is based on a science‑based forecasting model whose quality was demonstrated for 21 years, an anniversary that the company will celebrate on October 8.

The energy markets observatories, available on the AleaSoft‘s website, are a tool that allows monitoring the main European electricity, fuels and CO2 markets with daily updated data. The observatories include comparative graphs of the last weeks, with hourly, daily and weekly information.

PrevAnteriorThe future that would await us without storage or nuclear power plants
SiguienteThe autumn that is waiting for us in Europe: a lot of hydroelectric energy production except in the southNext
Menu
Facebook-f Twitter Linkedin Instagram