AleaSoft, January 4, 2021. Despite being a period of holidays and festivities, during the last week of 2020 high prices were registered in the main electricity markets in Europe, due to the low temperatures that pushed the electricity demand in most countries, and also favoured by the fall in wind energy production in France and Germany.

The solar energy production between Monday, December 28, 2020 and Sunday, January 3, 2021, increased by 14% compared to the previous week in the Spanish market. In the German market it grew by 9.0% while, in the French, by 6.8%. On the contrary, in the Portuguese market the production decreased by 18% and in the Italian, by 2.5%. 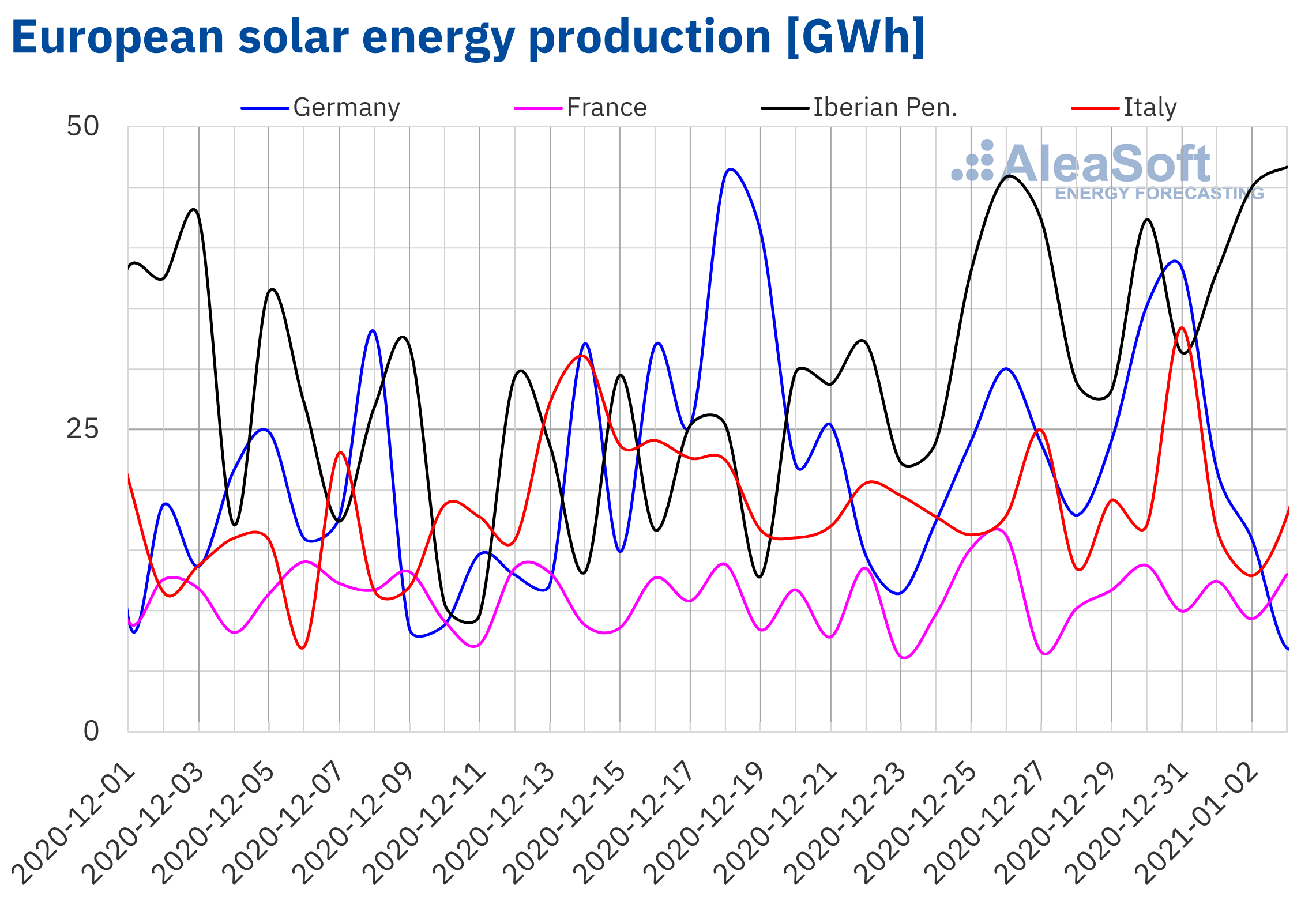 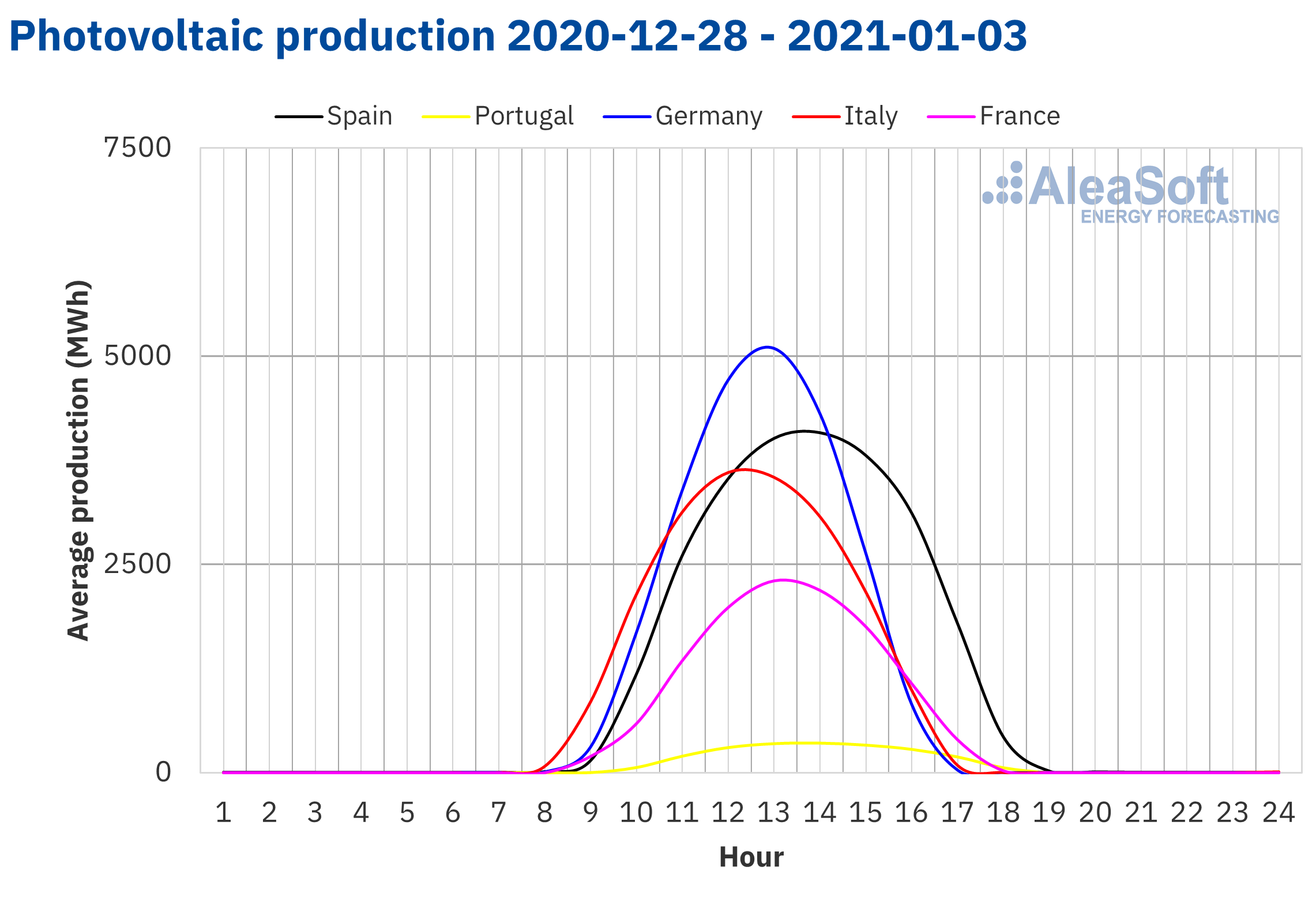 During the last week of 2020, the wind energy production increased by about 71% in the Italian market compared to the previous week. In the Iberian Peninsula there was also a significant increase of 32% while in the markets of France and Germany it decreased by 60% and 47%, respectively. 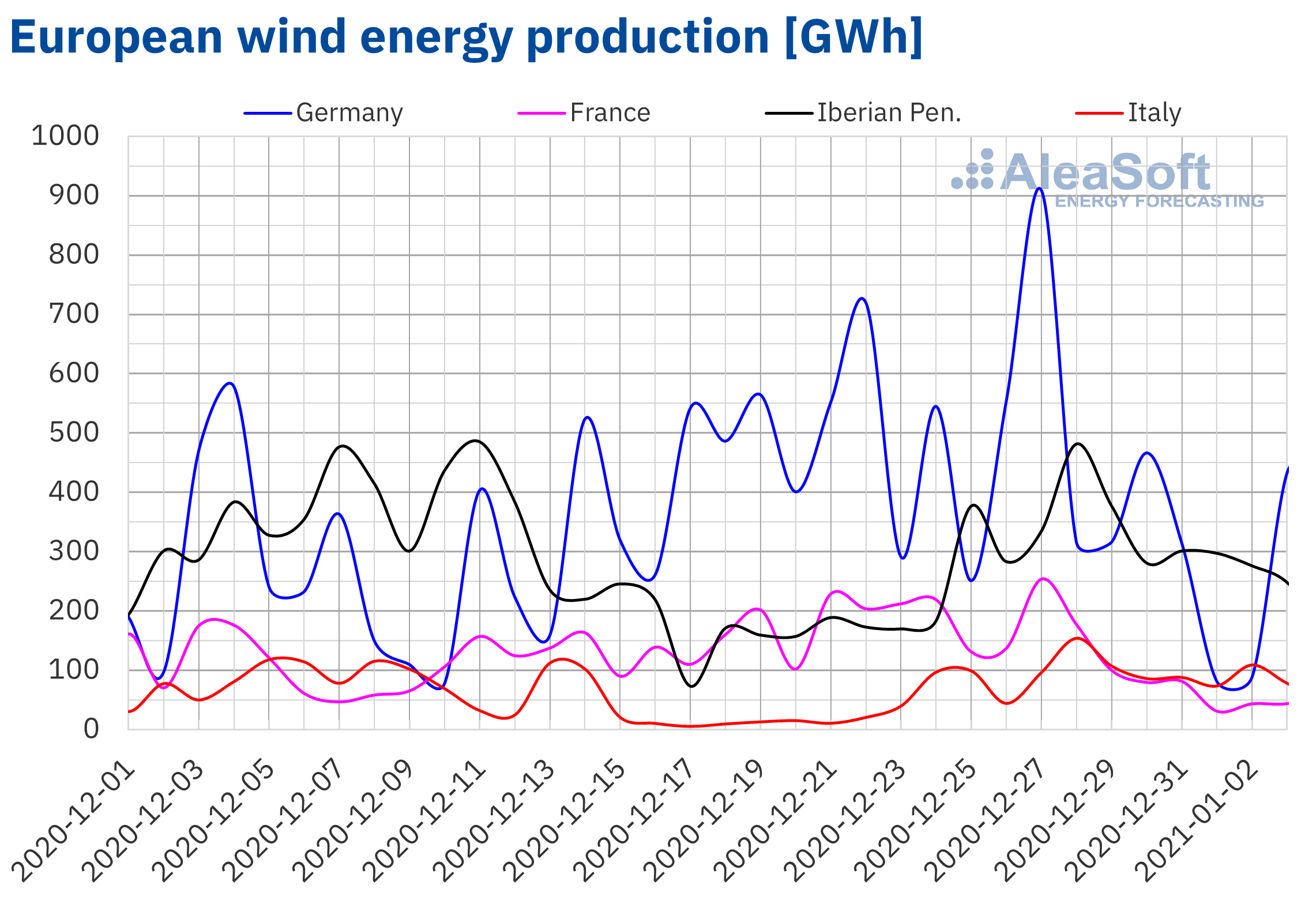 The opposite effects on electricity demand exerted by lower temperatures on the one hand and holidays on the other, were struggling during the week of December 28 in Europe.

Temperatures dropped on average around 3 °C, but in countries like France, Great Britain and Belgium, the drop in temperatures approached or exceeded 4 °C. These weather conditions led to demand increases in Spain, Portugal, Belgium and the Netherlands of around 2% despite being a typically low‑work week between the Christmas and New Year holidays. In countries more sensitive to temperatures such as France or Great Britain, increases in demand reached 12% and 8%, respectively.

On the other hand, the decline in employment in that week was the dominating effect in the German and Italian markets, with falls of 4.4% and 2.6% respectively.

The forecasting indicates that the drop in temperatures of around 2 °C during this week of January 4 will bring significant increases in electricity demand in European markets. 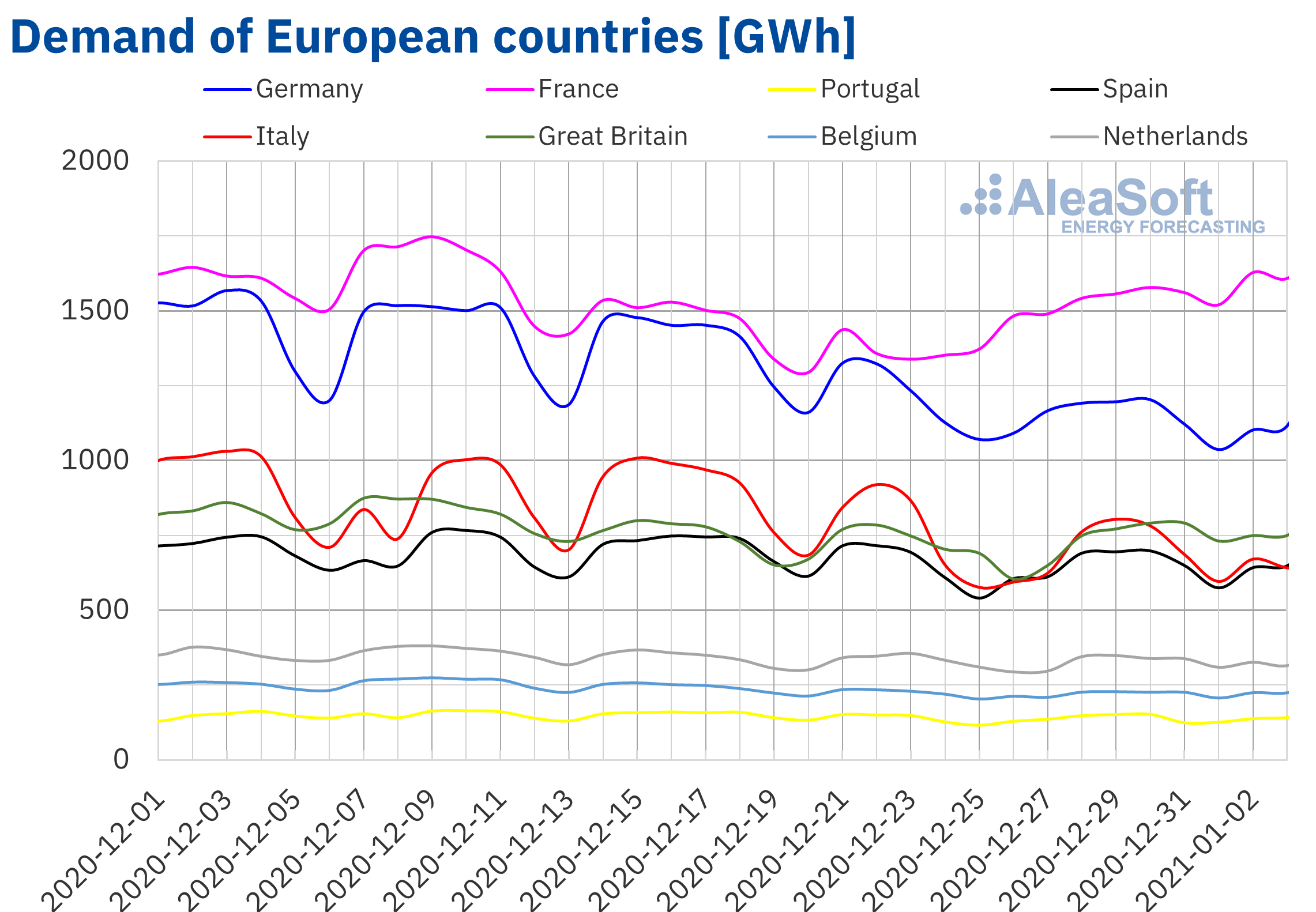 The week of December 28, the prices of all the European electricity markets analysed at AleaSoft increased compared to those of the previous week. The market with the highest prices increase, 81%, was the EPEX SPOT market of Germany, followed by the Nord Pool market of the Nordic countries, with an increase of 65%. In contrast, the markets with the lowest prices increases were the IPEX market of Italy and the MIBEL market of Spain and Portugal, with increases of 9.2% and 15%, respectively.

The last week of December, the weekly average prices were above €40/MWh in almost all the analysed European electricity markets. The exception was the Nord Pool market with an average price of €24.50/MWh. In contrast, the highest average of €68.54/MWh was reached in the UK N2EX market. In the rest of the markets, prices were between €42.07/MWh in the MIBEL market of Spain and €49.54/MWh in the EPEX SPOT market of the Netherlands. 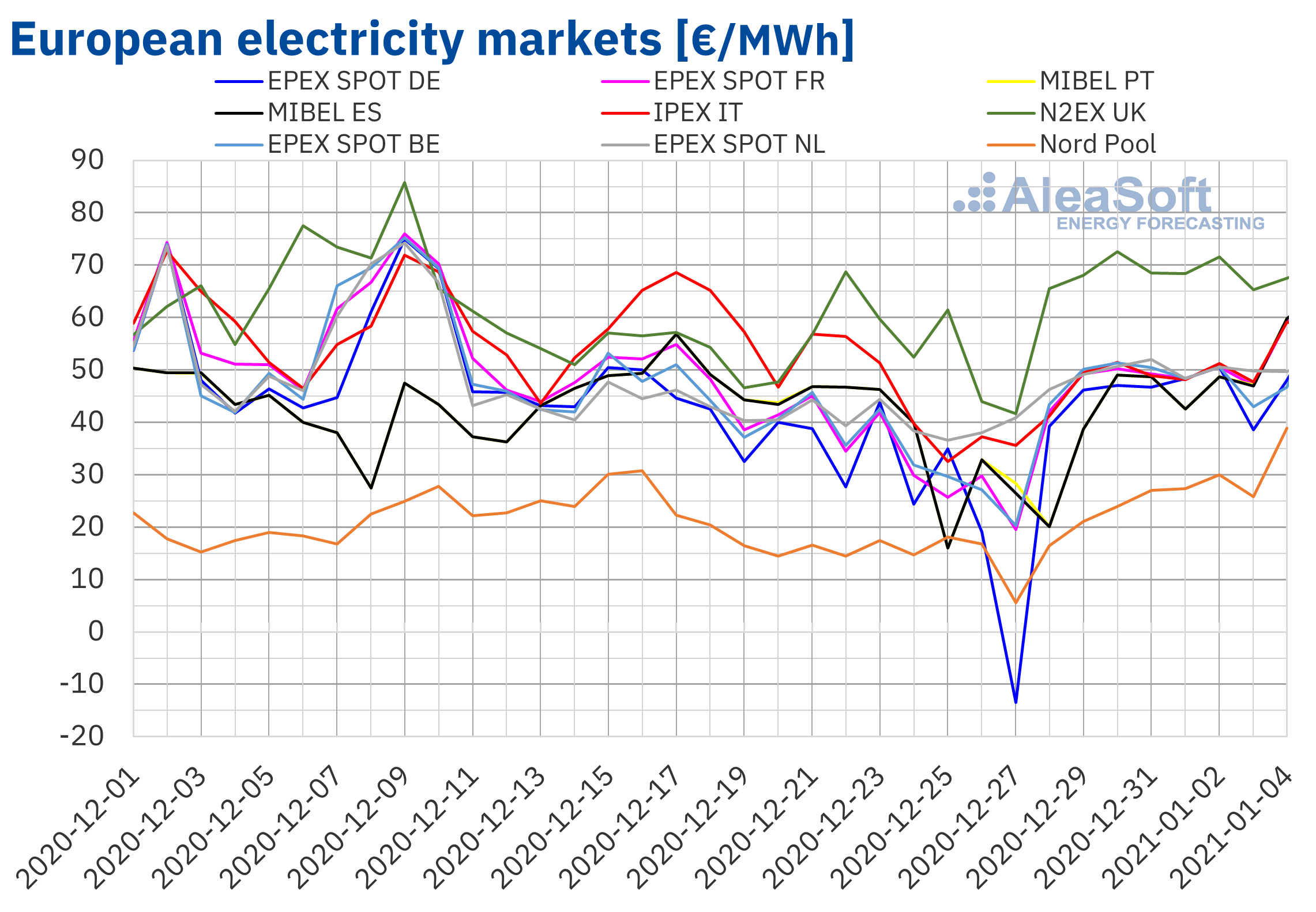 The AleaSoft‘s price forecasting indicates that the week of January 4 the prices of the European electricity markets will increase. The general increase in electricity demand will favour the rise in prices. Furthermore, the decline in wind energy production in most of the continent, as well as solar energy production in countries such as Germany and Spain, will also contribute to these increases.

The European electricity futures markets registered during the last week of the year a clearly upward behaviour for the prices of the product of the next quarter, that is, Q2‑2021. The Nordic ICE market and the NASDAQ market also of the Nordic countries were the ones that more evidenced this behaviour, due in large part to its low price, the percentage variations were approximately 34% for both. In the rest of the markets, the increases were between the 1.1% marked by the Belgian ICE market and the 3.6% of the Netherlands ICE market. In the sessions analysed each week, the OMIP market had identical settlement prices for Spain and Portugal.

In the case of the product of the next calendar year 2022, the behaviour was similar, but with the exception of the Iberian region. Both the EEX market of Spain and the OMIP market of Spain and Portugal registered price drops, of 1.0% in the case of EEX and 0.8% in the two OMIP countries. The markets of the Nordic countries also starred in the largest increases with values of 15% increase compared to the last session of the previous week. In the case of the EEX market of Great Britain, the Cal-22 product began trading during the last week of 2021, so there is no data for the previous week.

On the other hand, the current worsening of the pandemic in Europe and the possibility of increasing mobility restrictions in many countries will also have their effects on the recovery in demand.

Regarding the TTF gas futures in the ICE market for the month of February 2021, the last week of December, they registered settlement prices above €18/MWh. In the last session of the year, on Thursday, December 31, a settlement price of €19.12/MWh was reached. This price was 8.2% higher than the previous Thursday and the highest since November 2019. Low temperatures favoured this behaviour. In the coming days, gas prices could continue to rise for this same reason.

On the other hand, the settlement prices of API 2 coal futures in the ICE market for the month of February 2021 were higher than $68/t during the last week of December. The maximum settlement price of $71.45/t was reached on Monday, December 28. This price was 2.4% higher than the same day of the previous week and the highest since October 2019.

As for the settlement prices of the CO2 emission rights futures in the EEX market for the reference contract of December 2021, the last week of December, they exceeded €32/t. During the last week of the year, the Brexit agreement between the United Kingdom and the European Union, as well as low temperatures, favoured prices to remain above those of the previous week. The maximum settlement price for the week of €33.44/t was registered on Monday, December 28. This price was 8.3% higher than the previous Monday and the highest in the last six months. 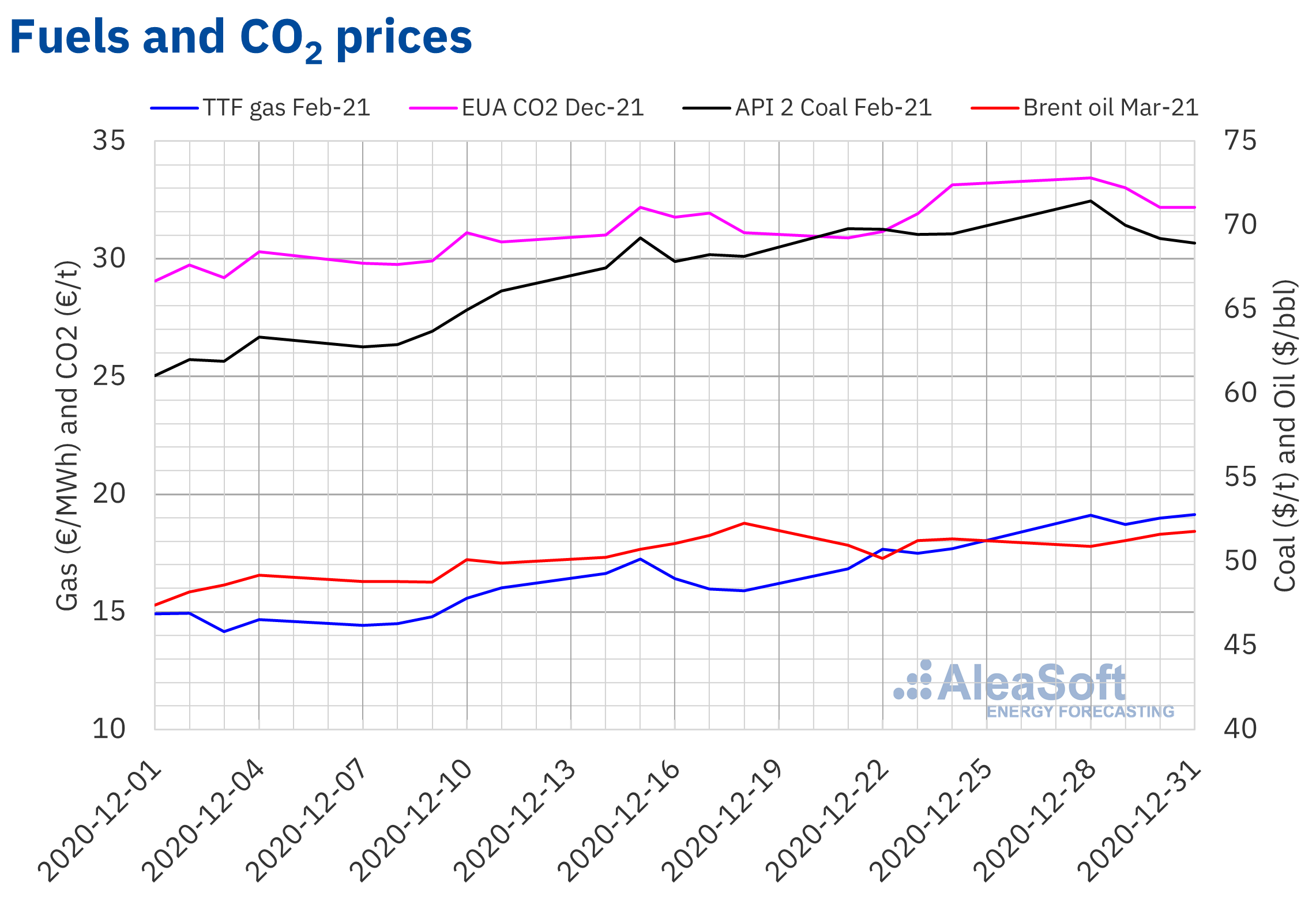 In the year 2021 that begins, AleaSoft will continue with the organisation of free webinars in Spanish and English for the dissemination of useful information on the evolution of energy markets and knowledge for professionals in the energy sector in Europe.

The first webinar of this year will be held on January 14. On this occasion, there will be the participation of several speakers from the consulting firm PwC Spain, to analyse the status and vision of the market for PPA contracts for large consumers, their impacts and requirements, and the need for estimates of future electricity market prices.

In addition, AleaSoft also has a wide variety of reports for the energy sector, which include detailed analysis on the evolution of energy markets in Europe and all the aspects that had or may have an influence on their prices and demands. The aim of these reports is to provide a clear vision of the future of the European energy system by providing knowledge, intelligence and opportunities.