AleaSoft Energy Forecasting, December 10, 2021. Renewable energy auctions will play an important role in the energy transition and the achievement of the renewable energy capacity targets for 2030. In this second part of the summary of this year 2021, the two auctions held and the situation of the NECP objectives are reviewed versus the planned auction calendar until 2025.

In 2021, after three years since the last auctions held in 2017, renewable energy auctions returned in the Spanish electricity market. The planned auction schedule indicates that, until 2025, the goal is auctioning 8500 MW of wind energy installations and 10 000 MW of solar photovoltaic energy.

The projects awarded in the auctions will have to offer their energy in the wholesale market, but they will be paid by the Renewable Energy Economic Regime (REER). The REER will pay each project the price it offered with a 5% exposure to spot market prices. Each project will have 12 years to supply all the energy assigned to the REER with the possibility of disengaging from the remuneration system as of the ninth year if it already delivered all the assigned energy.

Auctions allow projects with energy storage technologies, but they will only be allowed to store the energy produced by the plant and not energy from the grid. These projects will have a greater exposure to market prices: 25%, compared to 5% for projects without management capacity.

The auction of January

The Government’s intentions were starting with a first auction in 2020 of 1000 MW of wind energy and the same quantity of photovoltaic energy. But finally that auction of 2020 did not take place and it was necessary to wait until the end of January 2021 for the first auction.

Although the final prices of the auction are expected to have a very low or no impact on market prices or on prices of PPA that are signed this year, the fact that prices resulted in the expected range, around €25/MWh, raised the interest of international investors and developers. The results of that first auction showed a mature renewable energy sector in Spain with solid long‑term goals rather than a race where any price works, no matter how low.

The auction of October

In this second auction, quotas were reserved for specific types of projects for the first time. The largest quota, of 1500 MW, was destined for onshore wind energy, while for photovoltaic energy the reserve was slightly less than half, of 700 MW. To the 700 MW of photovoltaic energy, another 300 MW of this technology must be added, but they were intended for facilities with certain characteristics: distributed and local photovoltaic energy. They are installations with a maximum of 5 MW and whose ownership and financing must be local and participatory. The remaining 600 MW were for wind and photovoltaic energy with “accelerated availability”. This item was intended for facilities that can be available before September 30, 2022, and whose twelve‑year term to deliver energy under the REER must begin before January 31, 2023.

Auctions and objectives of the NECP

Renewable energy auctions are designed to help achieve the renewable energy capacity objectives established in the Integrated National Energy and Climate Plan (NECP). Based on the current situation, where there are more than 28 GW of installed wind energy capacity nationwide and about 14 GW of solar photovoltaic energy, with the planned capacity to auction until 2025, 90% of wind energy targets of the NECP for 2025 would be reached and photovoltaic energy targets would be exceeded by 10%. 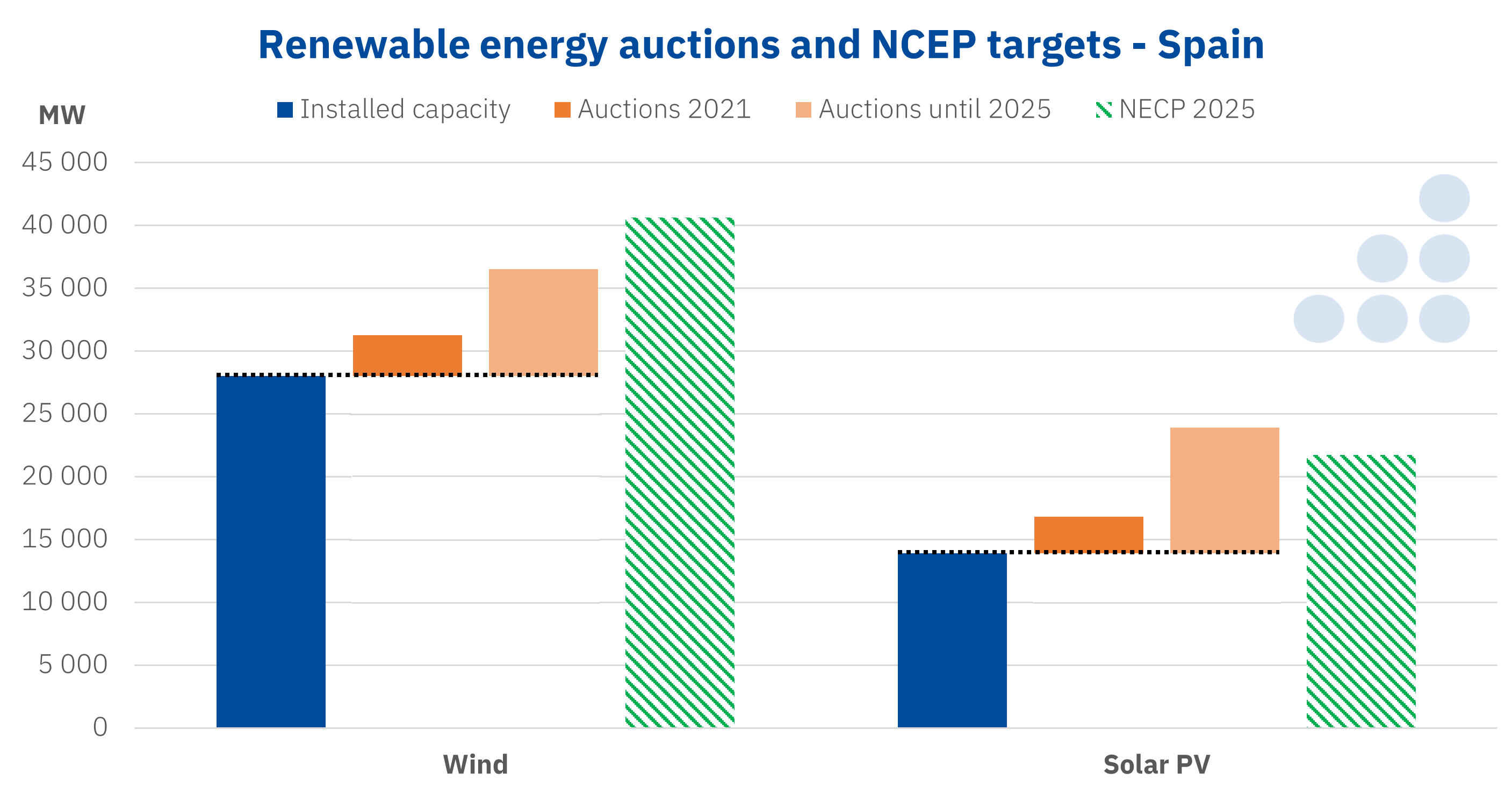 It is obvious that the winning projects of the auctions will coexist in the market with projects with signed PPA and with full merchant projects. Renewable energy projects, due to their characteristics and their expected sources of income, will have different financing conditions. But, in all cases, it is essential to have long‑term market prices forecasts with hourly granularity as input to the financial models to accurately estimate the expected revenues throughout the entire lifetime of the plant, both before and after REER or PPA.

The renewable energy projects financing, as well as the impact of the regulatory and electricity market situation on the development of PPA, both off‑site and on‑site, will be the topics that will be analysed in the first webinar of 2022 of the monthly webinars series organised by AleaSoft Energy Forecasting. The webinar will take place on January 13 and this time will include the participation of speakers from PwC Spain.