AleaSoft, March 23, 2021. The renewable energy projects that will be carried out over the next few years to meet the objectives of the NECP will require a significant investment. The financing conditions of each one will depend to a large extent on their typology, from the most favourable associated with the projects subsidised by the State, either through the RD 413/2014 or the renewable energy auctions, the increasingly better conditions of the projects with PPA, to the least advantageous of the pure merchant projects.

On March 18, the webinar “Prospects for the energy markets in Europe. Spring 2021” was held at AleaSoft. The webinar had the participation of speakers from EY (Ernst & Young) to transmit their experience in various topics of interest for the energy sector. One of the addressed topics was the financing conditions for the renewable energy projects in Spain, which are summarised in this article. Other topics that were also analysed in the webinar were the PPA in Spain, the latest regulatory novelties in the field of the energy and the business opportunities of the renewable energy companies in international markets.

Currently, the financing of the renewable energy projects in Spain can be divided into four typologies related to the existing regulation: the projects subsidised under the regulatory framework of the RD 413/2014, the projects with PPA, the pure merchant projects and the projects recently awarded in the auction for the granting of the Renewable Energy Economic Regime (REER). 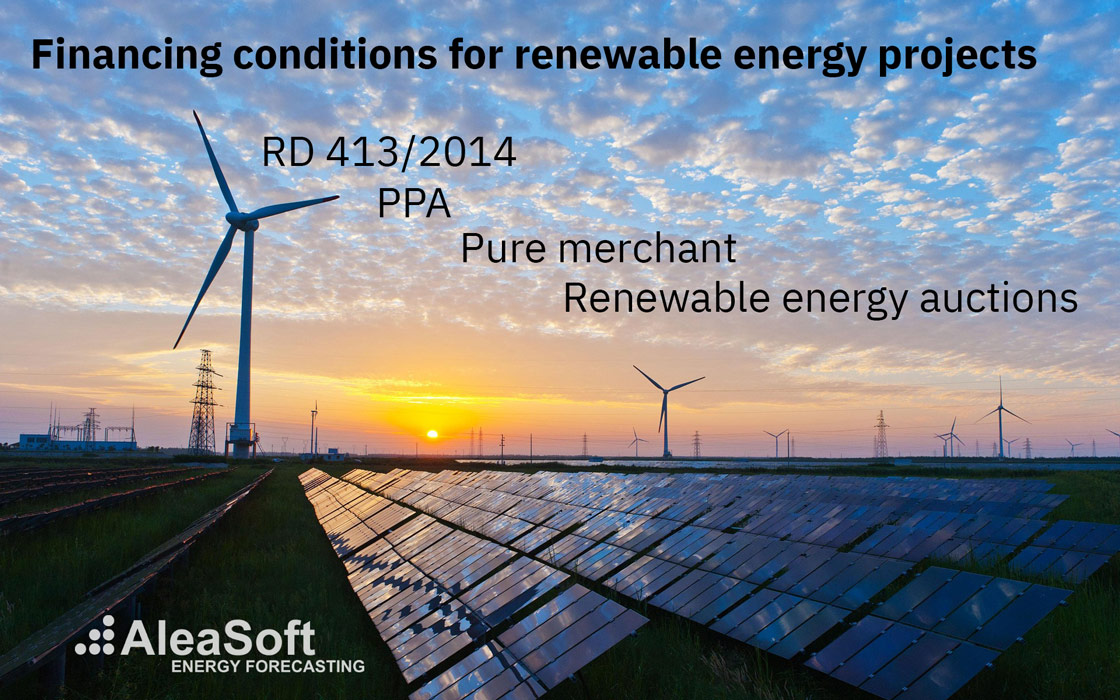 The projects subsidised by the RD 413/2014 are projects with a robust remuneration scheme, with great stability for the next 12 years once their profitability was reviewed with the RD 17/2019. There is a lot of interest in these projects by the banks, with more than 15 national and international lenders financing and refinancing them. They are easily leveraged, with a high degree of leverage, which exceeds 80% in most cases and can reach 90%, with terms of 22 or 23 years on average, and with quite favourable financing conditions.

On the other hand, there are the projects with PPA that in Spain grew considerably in recent years and whose financing conditions are getting better and better. There are not as many banks that finance this type of projects as in the case of those of the RD 413/2014, but at least eight credit institutions are very active in the Spanish market. In this case, the financing conditions also depend on the counterparty risk, however, in the PPA that do not have an optimal credit quality, more creative ways of structuring these financing are being seen. In general, the conditions are more expensive compared to those of the RD 413/2014 projects and the leverage, although not as high, has quite attractive conditions between 75% and 80% with a duration of between 15 and 18 years. It is common to use financial structures that allow the terms to be closer to the duration of the PPA.

The pure merchant projects, which sell all their energy directly to the market, are currently in the minority and there is less interest by the banks. Still, three to five lenders are financing them. These projects do not have the counterparty risk, since the counterparty is the market, which is very liquid. The leverage is lower, between 55% and 65%, the latter in the most optimistic case. The duration of the debt is about 15 to 18 years, but also with financial structures that what they do is reducing these terms. In general, the financing conditions for these projects are the least favourable and also have the highest interest rates.

Finally, there are the winning projects in the renewable energy auction (REER) held on January 26. In this auction, 3000 MW were awarded, with an average price of €24.47/MWh for the photovoltaic energy projects and €25.31/MWh for the wind energy projects, for the next 12 years. In this case, the counterparty risk is the state risk, so it is understood that it is risk‑free. This is why the auction prices are not equivalent to those of a private market PPA. At the moment, the financing of these projects is incipient and the same eight credit institutions that are interested in the private PPA showed interest. The financing structure is very similar to that of the private PPA and it is expected that there may be a leverage of up to 80%. As in the private PPA, the duration of the debt will be between 15 and 18 years with structures that will shorten them to bring them closer to the period covered by the auction. The financing conditions will be slightly better than those of the private PPA in the 12 years covered by the auction.

In all types of financing for renewable energy projects, the credit agencies use third‑party prices forecasts that allow them to size the debt, in addition to their own estimates. At AleaSoft, long‑term market prices forecasts are made with a 30‑year horizon and hourly detail, which also include confidence bands for the annual prices.

To know all the details of the financing conditions of the renewable energy projects in Spain, as well as the rest of the topics analysed in the webinar, the recording can be requested through this link.

The second part of this series of webinars

The second part of this webinar of AleaSoft will be held on April 15. On that occasion, there will be the participation of speakers from Axpo to continue analysing the evolution of the energy markets in Europe and their medium and long‑term prospects and also talk about the new players in the financial markets to absorb the demand for financing taking into account all the renewable energy capacity that is expected to be installed in the coming years, the taking of positions regarding the climate change of the large stakeholders worldwide and the corporate PPA as a solution both for the industry and for the development of the renewable energies.

In the webinars of AleaSoft of October 2020 with the participation of Deloitte, of November 2020 with Vector Renewables, of January 2021 with PwC Spain and of February 2021 with Engie, the financing of the renewable energy projects was also addressed, highlighting the importance of the long‑term prices forecasts with a 30‑year horizon and hourly granularity to negotiate the projects financing conditions and also in the audits and the portfolio valuation.