AleaSoft, April 16, 2020. This week the prices in all European electricity markets fell compared to last week. The electricity demand also fell in most markets, mainly because Easter Monday was a holiday in many countries. The wind energy production increased, also contributing to the fall in prices. The crude oil prices continued to decline despite the cuts announced by OPEC+ due to the poor prospects for the world economy. The gas and CO2 prices also dropped this week.

In the period from Monday to Wednesday of the week that began on April 13, the solar energy production decreased in most of the markets analysed at AleaSoft, compared to the average of the previous week. The greatest variations were registered in the Italian and German markets, with a decrease in their productions of 19% and 13% respectively. In the case of the Iberian Peninsula, the variation was ‑7.4%.

During the first 15 days of April, the solar energy production increased in most European markets compared to that registered in the same period of 2019. In Italy, this month’s increase was 86%, while in the German market and in the Iberian Peninsula the increases in production with this technology were 41% and 25% respectively.

The AleaSoft forecasting indicates that at the end of this week the solar energy production in Germany and Italy will continue to be lower than that registered last week. 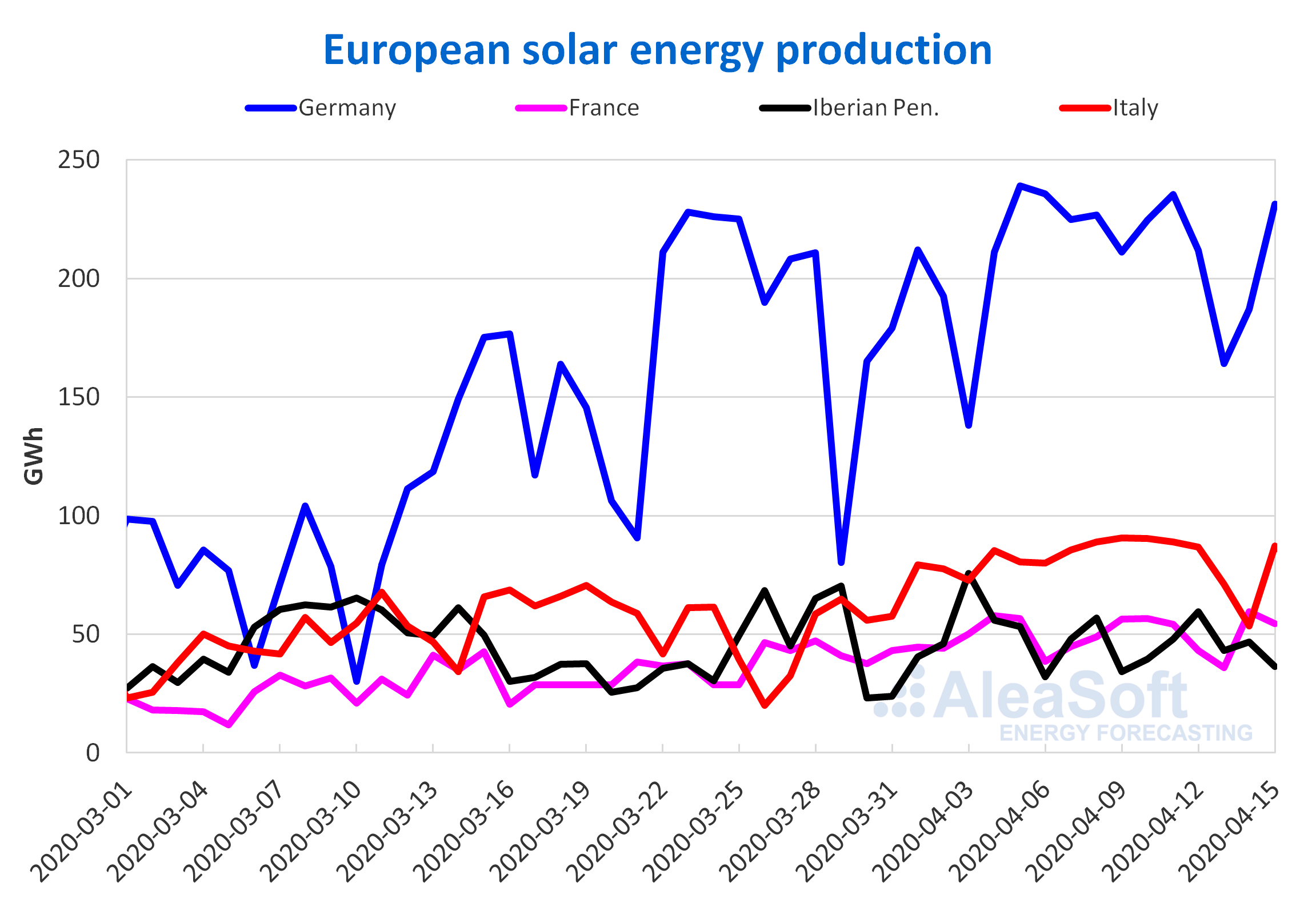 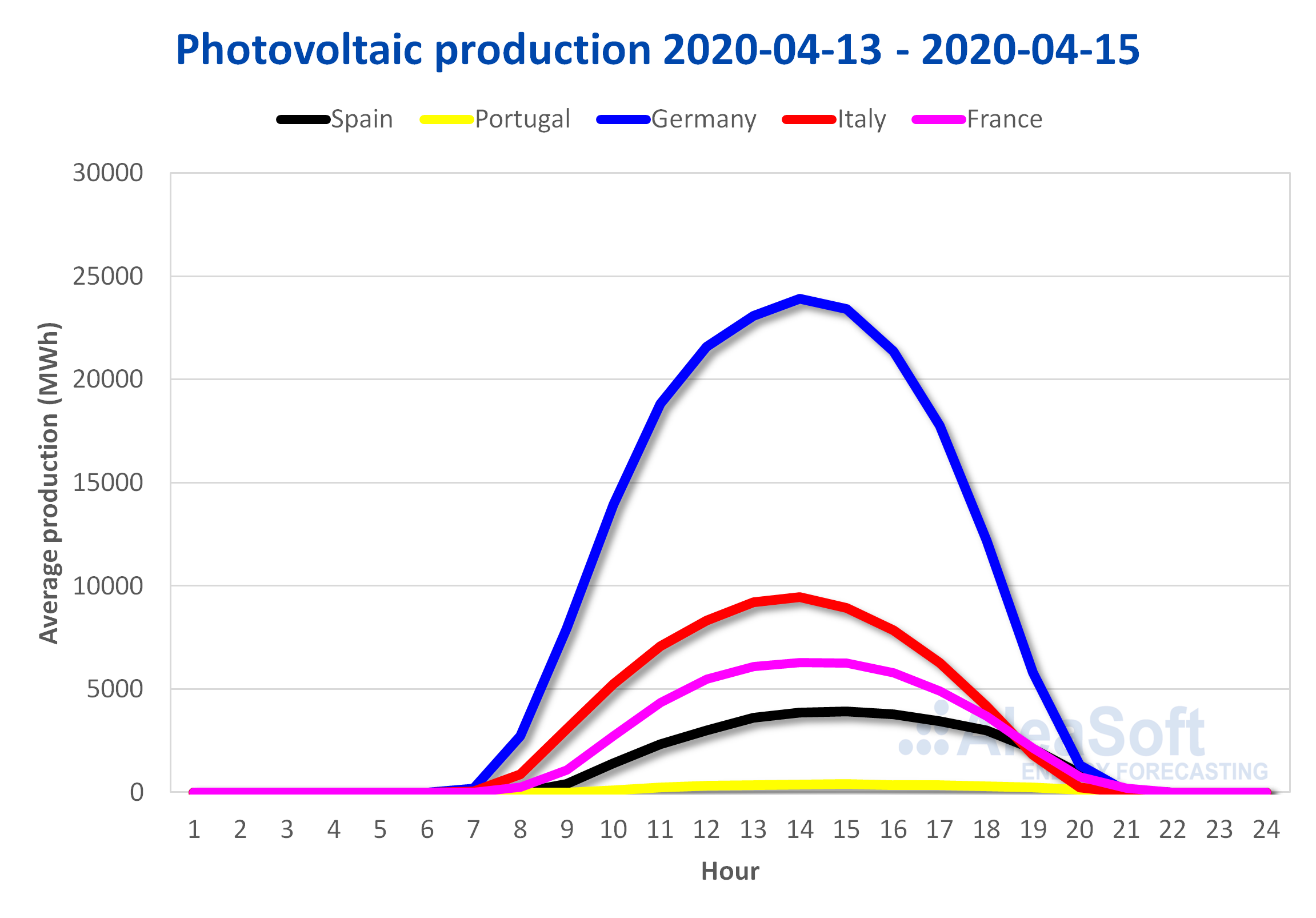 The average wind energy production in the period between Monday, April 13, and Wednesday, April 15, was much higher than the average production registered the previous week in all the markets analysed at AleaSoft. The Italian market stands out with an increase close to 206%, while in Germany it also produced more than double that of the previous week. On the other hand, in the Iberian Peninsula the increase was close to 70%.

From the first day of April to Wednesday, April 15, the wind energy production was 30% lower in the Iberian Peninsula and 5.4% in Italy. On the contrary, in the German market there was an increase of 9.2%.

At AleaSoft, the total wind energy production is expected to increase at the end of this week in all analysed markets. 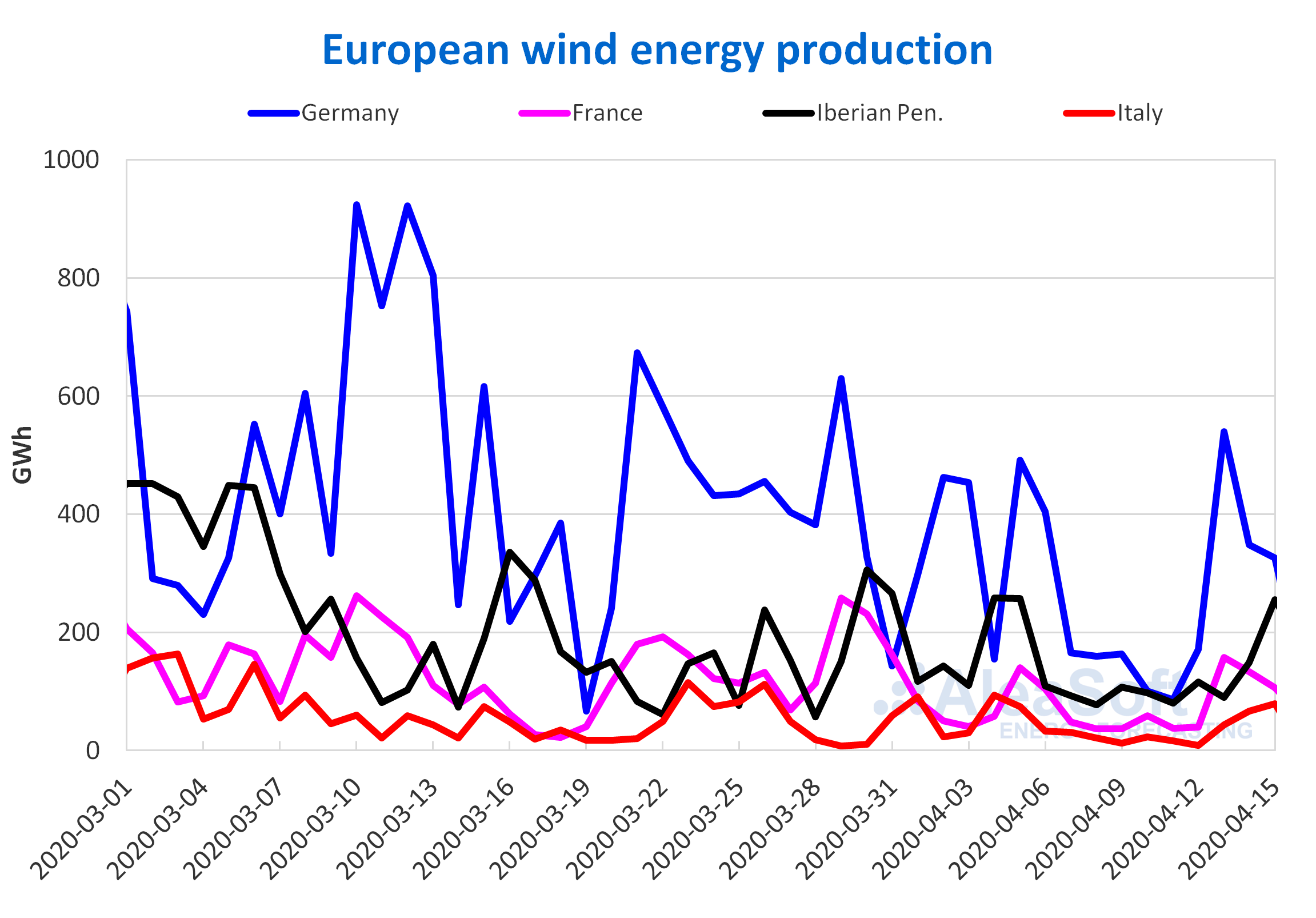 So far this week, the electricity demand was below the level of the first three days of the Easter Week in all European markets, except in the case of Spain, where it increased by 2.3%. The main cause of this decline in most countries was the effect of the holiday of Easter Monday, April 13. The markets of Italy and Germany had the main decreases, which were 9.7% and 9.5% respectively. Between 4.9% and 6.3% were the falls in the cases of France, Great Britain and Belgium. On the other hand, lower variations were registered in Portugal and the Netherlands, with values of ‑2.0% and ‑3.3%.

This downward trend in the European markets in recent weeks can be analysed at the AleaSoft’s electricity demand observatories.

Some governments, such as those of Italy and Germany, relaxed the containment measures to curb the spread of the COVID‑19 starting this and next week, which may contribute to increases in demand. 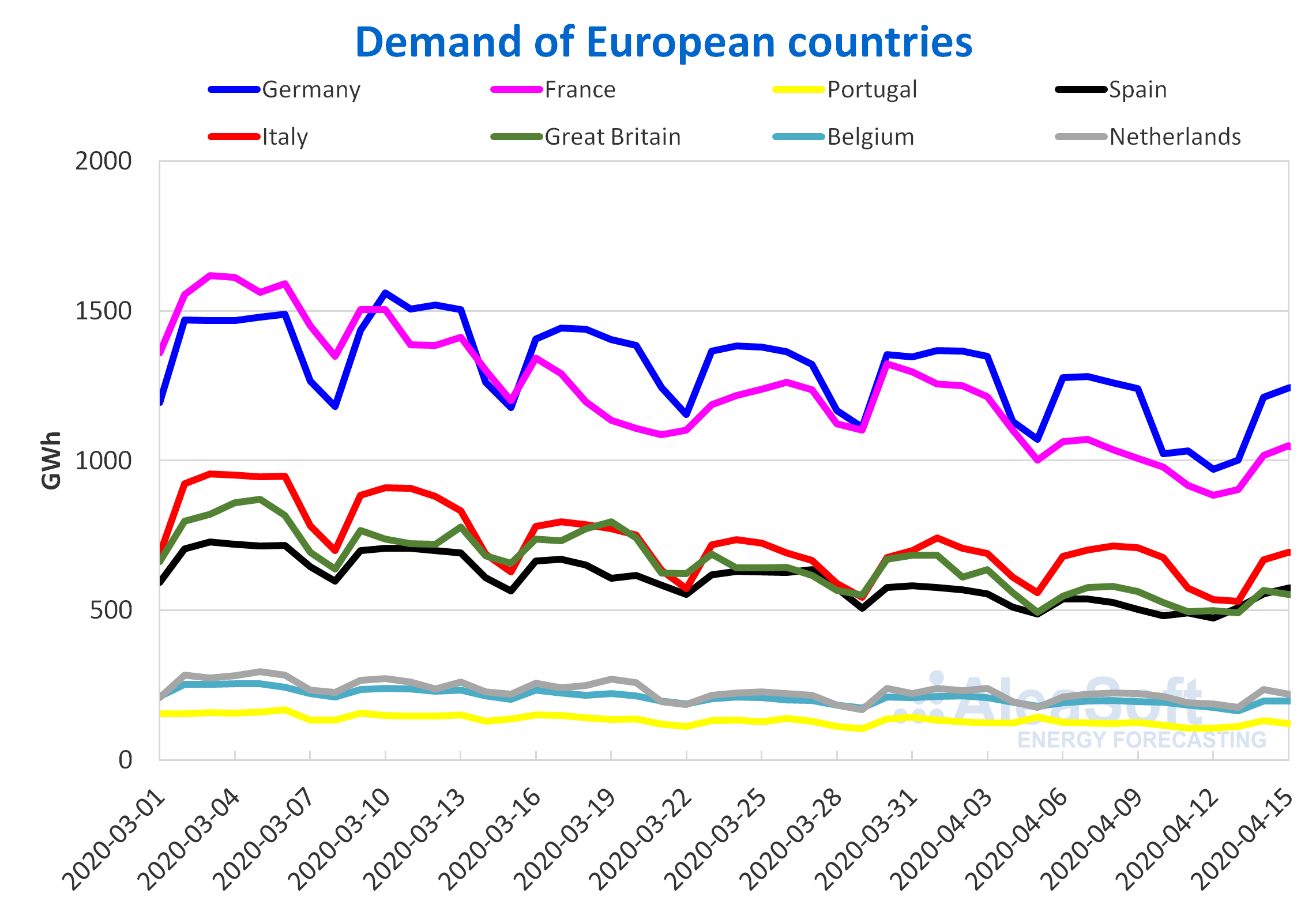 From Monday to Wednesday of this week, number 16 of the year, the electricity demand in Mainland Spain recovered with respect to the falls of recent weeks, compared to the same period of the week of April 6. This is fundamentally due to the resumption of the activity of non‑essential services, in sectors such as construction and industry, starting last Monday, April 13, and Tuesday, April 14, in the autonomous communities where Easter Monday was a holiday. The AleaSoft’s electricity demand forecasting shows a slight increase in demand in Mainland Spain at the end of this week compared to last week.

The solar energy production in Mainland Spain, which includes photovoltaic and solar thermal energy, decreased by 9.0% during the first three days of this week compared to the average of the previous week. In contrast, in the year‑on‑year analysis, the production with this technology was 27% higher during the first half of April. The AleaSoft‘s solar energy production forecasting indicates a decrease in production this week compared to last week.

The daily nuclear energy production from April 13 to 15 of this week was around 150 GWh, 12% less than last week’s level, of 170 GWh. On April 14, the unit 1 of the Almaraz Nuclear Power Plant was disconnected from the electricity grid to carry out the fuel change work. The shutdown will last 24 days and those responsible for the plant indicate that the protection and prevention measures already adopted because of COVID‑19 were strengthened in order to guarantee the safety of both its workers and the plant. 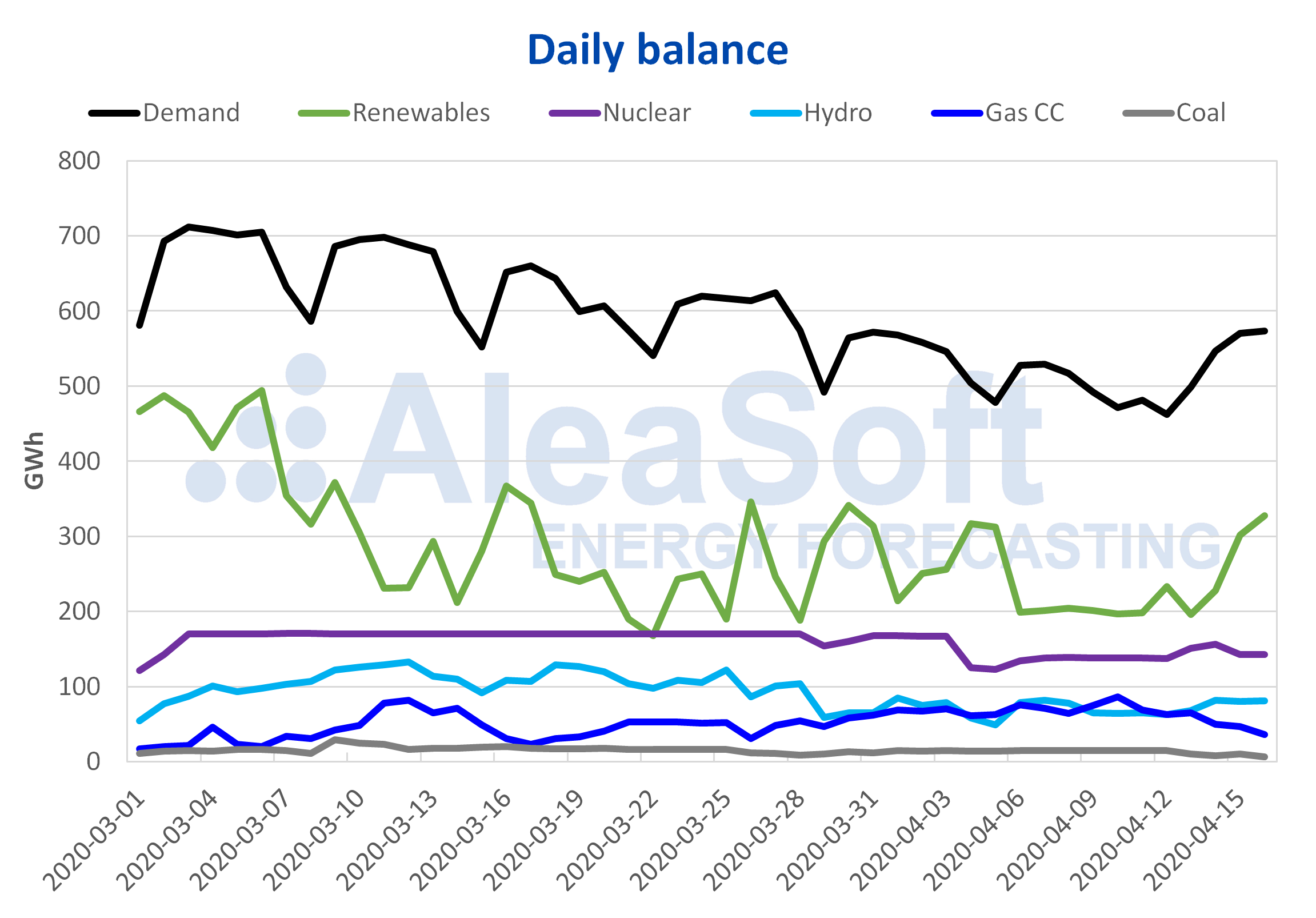 The hydroelectric reserves currently store 14 292 GWh, according to data from the last Hydrological Bulletin of the Ministry for the Ecological Transition and the Demographic Challenge, which represents an increase of 294 GWh compared to the previous bulletin.

In the first four days of this week of April 13, the prices fell across the European electricity markets compared to those registered the same days of last week. The largest declines, of 49%, 47% and 46%, occurred in the EPEX SPOT markets of Belgium, France and Germany, respectively. While the N2EX market of Great Britain and the Nord Pool market of the Nordic countries had the smallest variations, of ‑8.6% and ‑12%, respectively.

On the other hand, on April 13, Easter Monday, negative daily average prices were registered in the EPEX SPOT markets of Belgium, Germany, Switzerland, France and the Netherlands, of ‑€17.95/MWh, ‑€15.97/MWh, ‑€6.95/MWh , ‑€6.51/MWh and ‑€5.45/MWh, respectively. The price reached in the French market was the lowest since June 2013 and that of the Netherlands was the lowest in the last nine years. In addition, the lowest hourly price of April 13 was that of the hour 15 in the EPEX SPOT market of Belgium, of ‑€115.31/MWh, which is the lowest registered in that market since June 2019.

The drop in prices in the first days of this week is related to the low levels of demand due to the measures to stop the spread of the coronavirus and the fact that, in many European countries, Easter Monday was a holiday. The general increase in wind energy production and the decrease in prices of gas, coal and CO2 emission rights also exerted their influence. 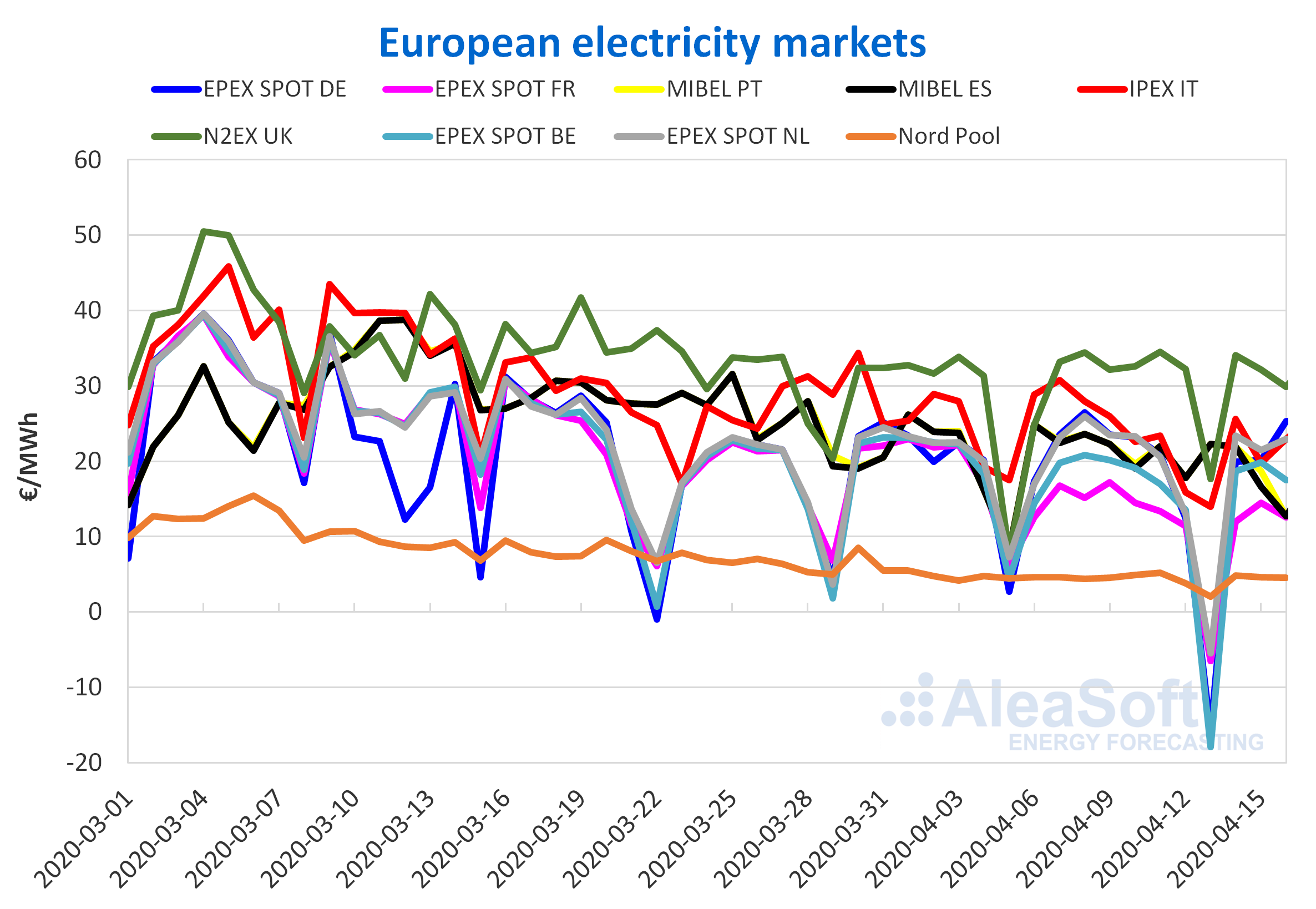 The AleaSoft‘s price forecasting indicates that at the end of this week the weekly average prices of the European markets will be lower than those of the previous week due to the increase in wind energy production and the low prices of gas, coal and CO2 emission rights. In addition, the temperatures are expected to increase towards the end of the week in many European countries, which adds to the drop in demand over the weekend.

The prices of the first four days of this week in the MIBEL market of Spain and Portugal fell 21% and 19%, respectively, compared to those registered the same days of last week. In the Spanish market, the average price from April 13 to 16 was €18.39/MWh and, in the Portuguese, €18.91/MWh.

It should be noted that on April 13, while some European markets registered negative average prices, the MIBEL market registered the highest average price on the continent, of €22.26/MWh. This is due, on the one hand, to the fact that Easter Monday was a holiday only in some regions of Spain and Portugal and, on the other, to the return to work in non‑essential activities in Spain from that day on. The latter caused an increase in Spanish demand that also influenced the evolution of prices this week.

After a recovery in the prices of the European electricity futures markets, so far this week the prices for the product of the third quarter of 2020 fell again in most of the markets analysed by AleaSoft. The ICE market and the NASDAQ market of the Nordic countries were the exception, with increases of 4.6% and 3.7% respectively. In the rest of the markets the decreases are between 3.4% and 8.8%. The ICE market of the Netherlands was the one with the greatest drop in the days since last Thursday, April 9.

Regarding the prices of the electricity futures for the next year, the situation is very similar to that of Q3‑2020, except that in this case the decrease also includes the Nordic region. The ICE market and the NASDAQ market of the Nordic countries were those that showed less variation, of ‑0.8% and ‑0.9% respectively. Outside the Nordic region, the decreases registered in the markets were between 5.1% of the EEX market of Germany and 3.0% of the OMIP market of Portugal.

The Brent oil futures for the month of June 2020 in the ICE market on Monday, April 13, reached a settlement price of $31.74/bbl, which is $0.26/bbl higher than that of the previous Thursday, day of the last session of last week. But a downward trend began on Tuesday. With daily declines of more than 6%, on Wednesday, April 15, a settlement price of $27.69/bbl was registered. This price is 16% lower than that of the previous Wednesday and the second lowest so far this month, after the $24.74/bbl of April 1.

Despite the fact that on Sunday, April 12, the member countries of OPEC+ agreed to reduce their production and on Monday the prices increased slightly, the drop in demand due to containment measures to stop the spread of the coronavirus worldwide exerted its downward influence on the prices the following days of the week. Another factor that generated a pessimistic sentiment in the market was the GDP forecasts published by the IMF on April 14, which point to a significant decline in the economy worldwide. Given that the production cuts agreed by the OPEC+ will not start until May, the prices could remain low in the coming days.

The TTF gas futures prices in the ICE market for the month of May 2020 fell the first days of this week until reaching a settlement price of €6.65/MWh on Wednesday, April 15. This price is 8.4% lower than that of the previous Wednesday and the lowest in the last two years.

Regarding the TTF gas in the spot market, the first days of this week, the prices were lower than €7/MWh. The lowest index price of this week is that of this Thursday, April 16, of €6.82/MWh. This price is 5.4% lower than that of the previous Thursday and is the lowest in the last fifteen years.

On the other hand, the API 2 coal futures prices in the ICE market for the month of May 2020, the first days of this week, showed a downward trend. A settlement price of $45.00/t was reached on Wednesday, April 15, which is 5.0% lower than that of the previous Wednesday and the lowest in the last two years.

Regarding the CO2 emission rights futures prices in the EEX market for the reference contract of December 2020, the first days of this week they began a downward trend and remained below €20/t. The settlement price of yesterday Wednesday, April 15, was €19.26/t, 8.9% lower than that of Wednesday of last week. 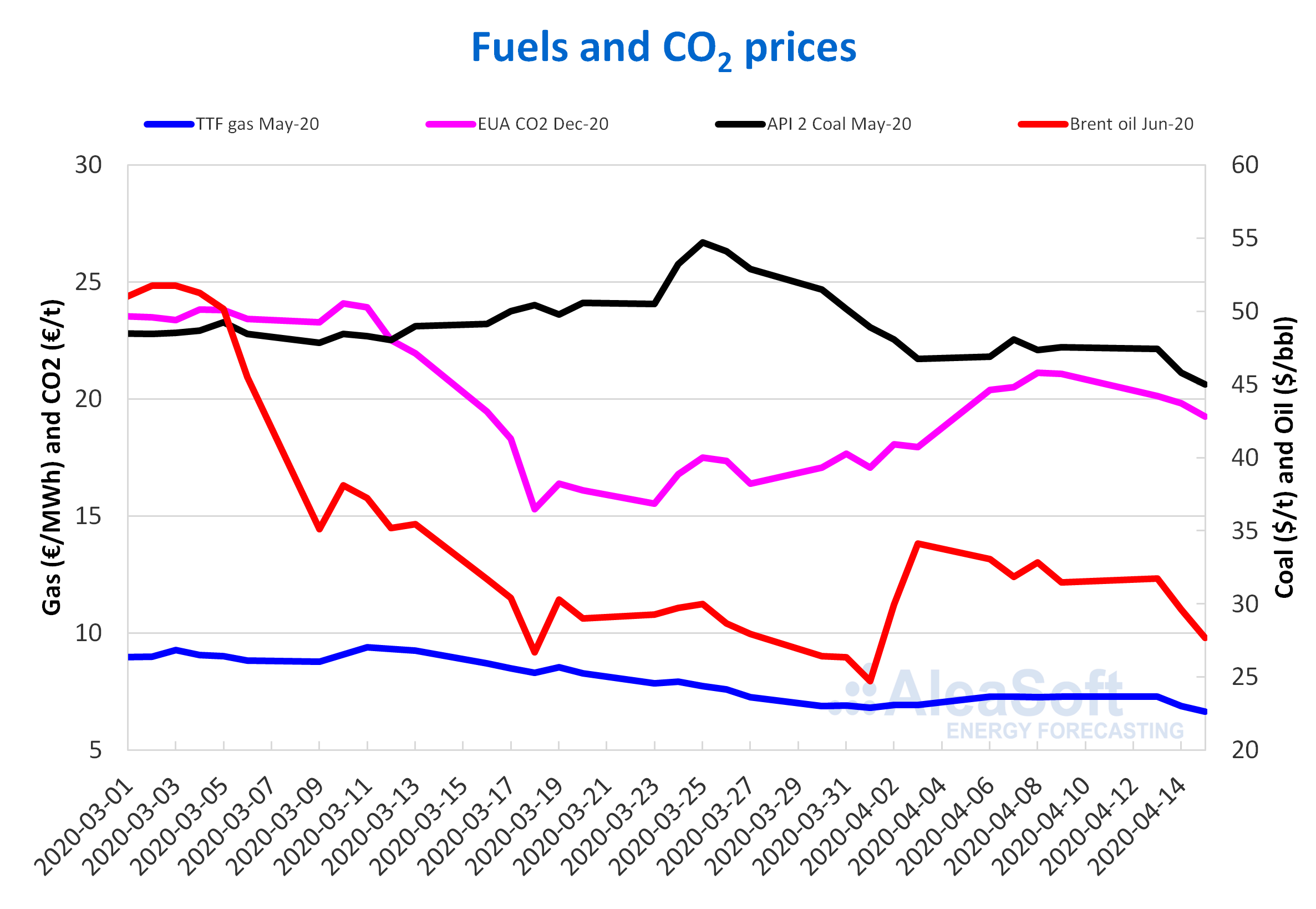 Today, April 16, AleaSoft imparted a Webinar in which the “Influence of coronavirus on electricity demand and the European electricity markets” was analysed. In the Webinar, the effects of the main electricity markets in Europe due to the current COVID‑19 crisis were analysed. The effects on the Brent oil, gas and CO2 emission rights markets were also analysed. To conclude, the future perspectives once the coronavirus crisis is overcome and during the economic crisis that this situation caused were commented.

On May 21, the Webinar “Influence of coronavirus on electricity demand and the European electricity markets (part 2)” will be imparted, which will address the issues:

Furthermore, an observatory on the incidence of the coronavirus on the electricity demand of Spain was created on the AleaSoft website.