AleaSoft, February 17, 2021. The PPA will coexist with the renewable energy auctions as ways to obtain the financing of the renewable energy projects in the coming years, especially for the small and medium-sized projects that cannot gain a foothold in the auctions. The PPA are also attractive for the offtakers by providing them with stability, competitiveness and helping them achieve their corporate social responsibility goals.

The European energy markets recovered from the lows reached during the early moments of the COVID‑19 pandemic and the financing of the renewable energy projects was unaffected in this context. A webinar is being organised at AleaSoft, to be held on February 18, in which these issues will be analysed with the participation of speakers from Engie. 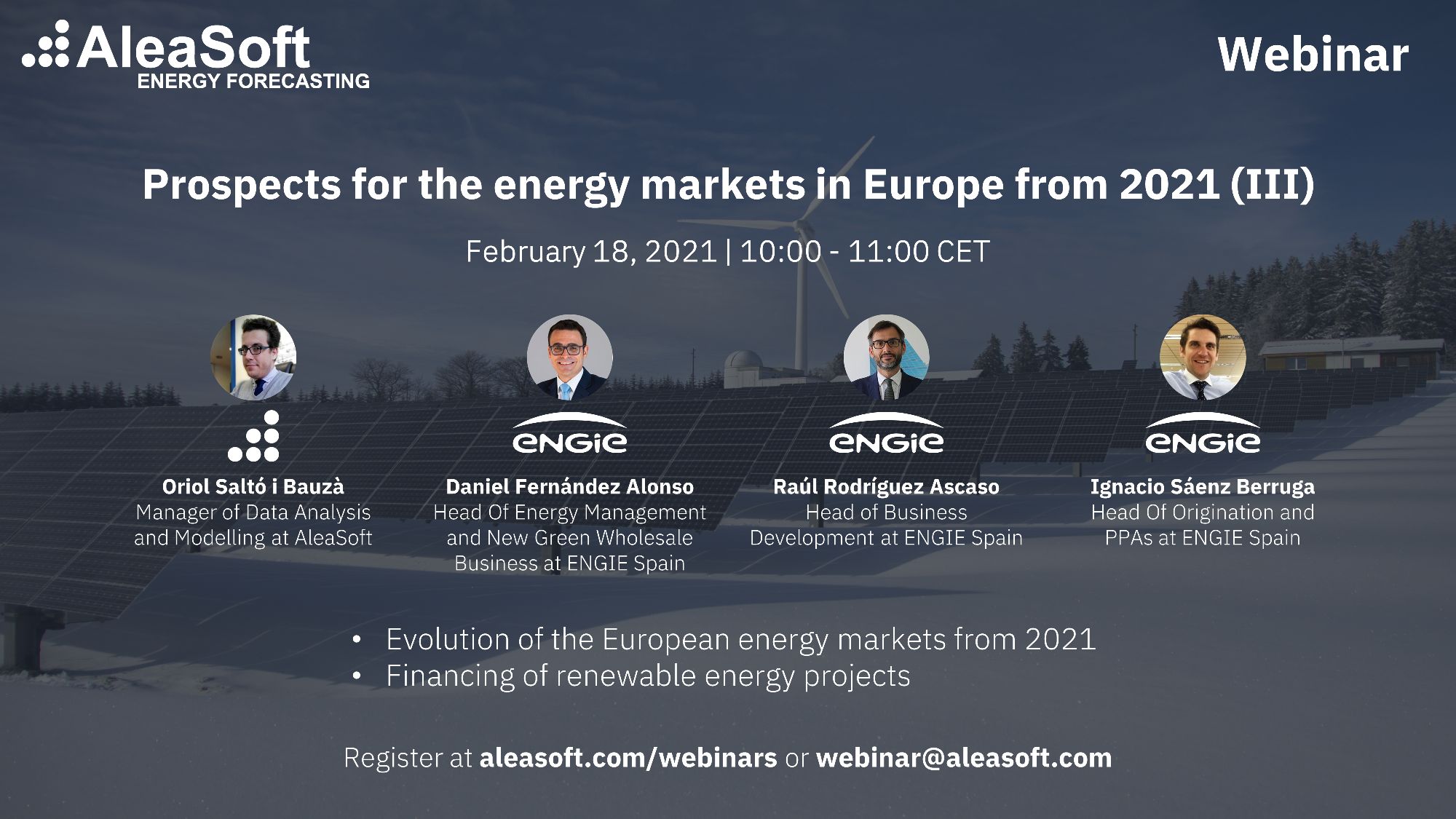 The importance of the PPA

In the webinar, special attention will be paid to the PPA (Power Purchase Agreement), taking into account the prominence they gained in recent years as a tool to obtain the financing of renewable energy projects. The predictability of the long‑term cash flows offered by this type of bilateral contract makes it a very appropriate option for the Project Finance of the new renewable energy projects. Hence the importance of the PPA for the generators, since it allows them to obtain financing with a high leverage.

But the generators are not the only beneficiaries of the PPA. The other party, the consumers or offtakers, ensure predictability in the prices they will pay for the electricity and reduce the risk of market prices, that is, it provides stability. In addition, if the prices agreed in a PPA are lower than those of the market, it allows them to reduce costs and guarantees competitiveness.

The offtakers are usually final consumers, generally electrointensive, or retailers. The PPA that are signed with the large consumer companies are called corporate PPA. These companies tend to make intensive use of the electricity in their production processes, so knowing the electricity price in advance allows them to calculate the production costs. The retailers also benefit from having a pre‑established electricity price because it allows them to forecast their costs over a long term and define the offers they will make to their customers to achieve a certain profit margin.

Another aspect that generates great interest in the offtakers when signing a PPA, whether they are large consumers or retailers, is that they can guarantee the renewable origin of the energy they consume or offer, giving them an image of commitment to the environment. In the webinar the attraction of the PPA for the consumers will be analysed.

One of the elements that are negotiated in a PPA are the prices, which can have different structures, for example, establishing cap and floor prices, or different price levels throughout the horizon. This is why the long‑term prices curves are an essential input in this part of the negotiation.

Other elements that are negotiated in a PPA are the duration of the contract, the volume of energy, who will be in charge of absorbing the deviations, which type of PPA best suits the needs: physical, financial or a combination of both. It is also necessary to identify the risks and guarantees well and agree on how they will be distributed. In summary, the process of negotiating a PPA can be long and complex.

Coexistence of the PPA and the renewable energy auctions

The resumption of the renewable energy auctions in Spain on January 26 generated debate about whether the PPA will be affected. The PPA will continue to be essential as a financing tool for the renewable energy projects. In the January 26 auctions, the winners were large companies, so the PPA will continue to be a way for the small and medium developers to obtain financing. In the webinar, the coexistence of these two financing alternatives for the generators will be analysed.

The evolution of the energy markets in Europe

The European electricity markets recovered after the falls registered in March and April coinciding with the most difficult moment of the COVID‑19 pandemic. In fact, in January 2021 high prices records were reached in several markets of the continent. 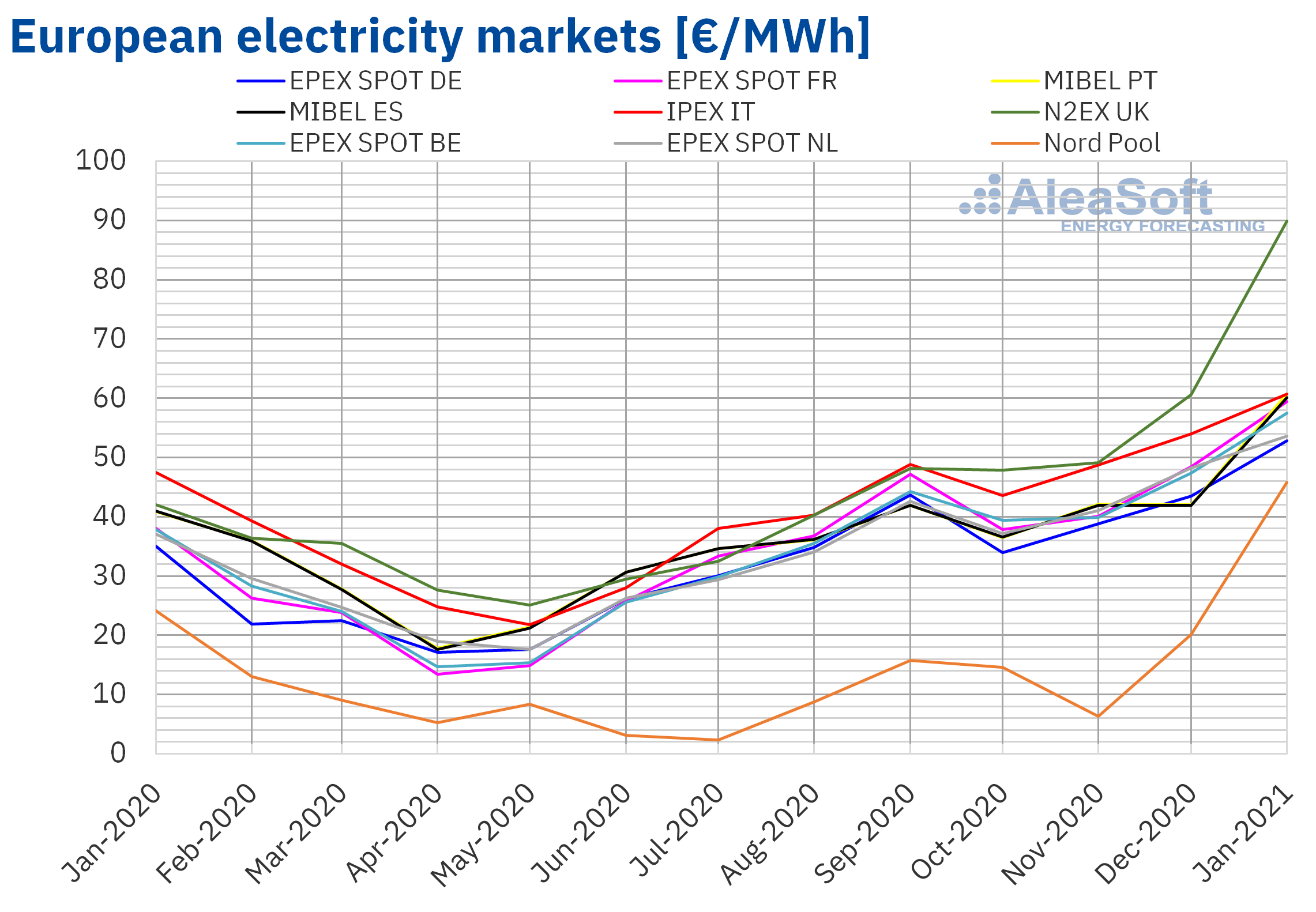 The recovery is not just limited to the electricity markets. The TTF gas prices since the end of December 2020 are at levels not seen since April 2019, above €17/MWh, and reached over €25/MWh during the cold snap of the first half of January. The Brent futures for April 2021 in the February 15 session were above $63/bbl, something that did not happen since May 2019, and the CO2 emission rights futures were setting historical records, the last one when they exceeded €40/t in the February 12 session. All these data demonstrate the robustness of the energy markets that managed to recover when there is still uncertainty regarding the evolution of the economy.

Prospects for the energy markets in Europe. Spring 2021.

To continue analysing the evolution of the markets and the financing of the renewable energy projects, the following webinar began to be organised at AleaSoft, which will focus on the prospects for spring 2021. It will be on March 18 and in this occasion the invited speakers will be from EY (Ernst & Young).

In addition to the long‑term reports used as input in the negotiation of the prices of a PPA, forecasts of the European electricity markets in the short and medium term are also offered at AleaSoft. These services are increasingly demanded by the renewable energy projects that came into operation.