AleaSoft, November 27, 2020. Are the renewable energy auctions necessary to achieve the objectives of the NECP? Are the auctions necessary for the projects to get funding? Are the energy markets fully recovered from the crisis? Which is the long term vision for the electricity markets? All these very current issues in the energy sector are those that were debated and analysed in the last AleaSoft webinar.

Last Thursday, November 26, the last webinar of the year 2020 organised by AleaSoft was held, where speakers from Vector Renewables also participated. During the meeting, the evolution of the energy markets, the new renewable energy auctions in Spain and the importance of the technical due diligence for the renewable energy projects were discussed and analysed.

Evolution of the energy markets in Europe

The electricity, gas and CO2 emission rights markets were recovering since the collapse they registered during the first wave of the COVID‑19 pandemic in March, April and May. However, although the markets recovered the price and demand levels of before the crisis, the uncertainty about the evolution of the economy after this second wave in autumn leaves many questions about how the markets will evolve in the mid term.

The announcement of several coronavirus vaccines that are reaching the final stages of testing with high levels of effectiveness confirms that in the long term the recovery of the economy and the energy markets will be robust, something that the forecasting models already showed.

The first question that always arises when talking about the renewable energy auctions is whether they are really necessary to achieve the renewable capacity objectives set out in the National Energy and Climate Plan (NECP). In Spain, the ministerial order that includes an indicative auction calendar of 1500 MW of wind energy and 1800 MW of photovoltaic energy every year until 2025 is in the consultation phase.

Observing the statistics of Red Eléctrica de España (REE) on the MW of photovoltaic with request for access and connection to the grid, everything seems to indicate that the auctions would not be necessary to achieve the renewable capacity objectives of the NECP. These numbers indicate that Spain continues to be an attractive region for investment in renewable energies, especially photovoltaic energy, even when it was not known whether or not the auctions would be held. 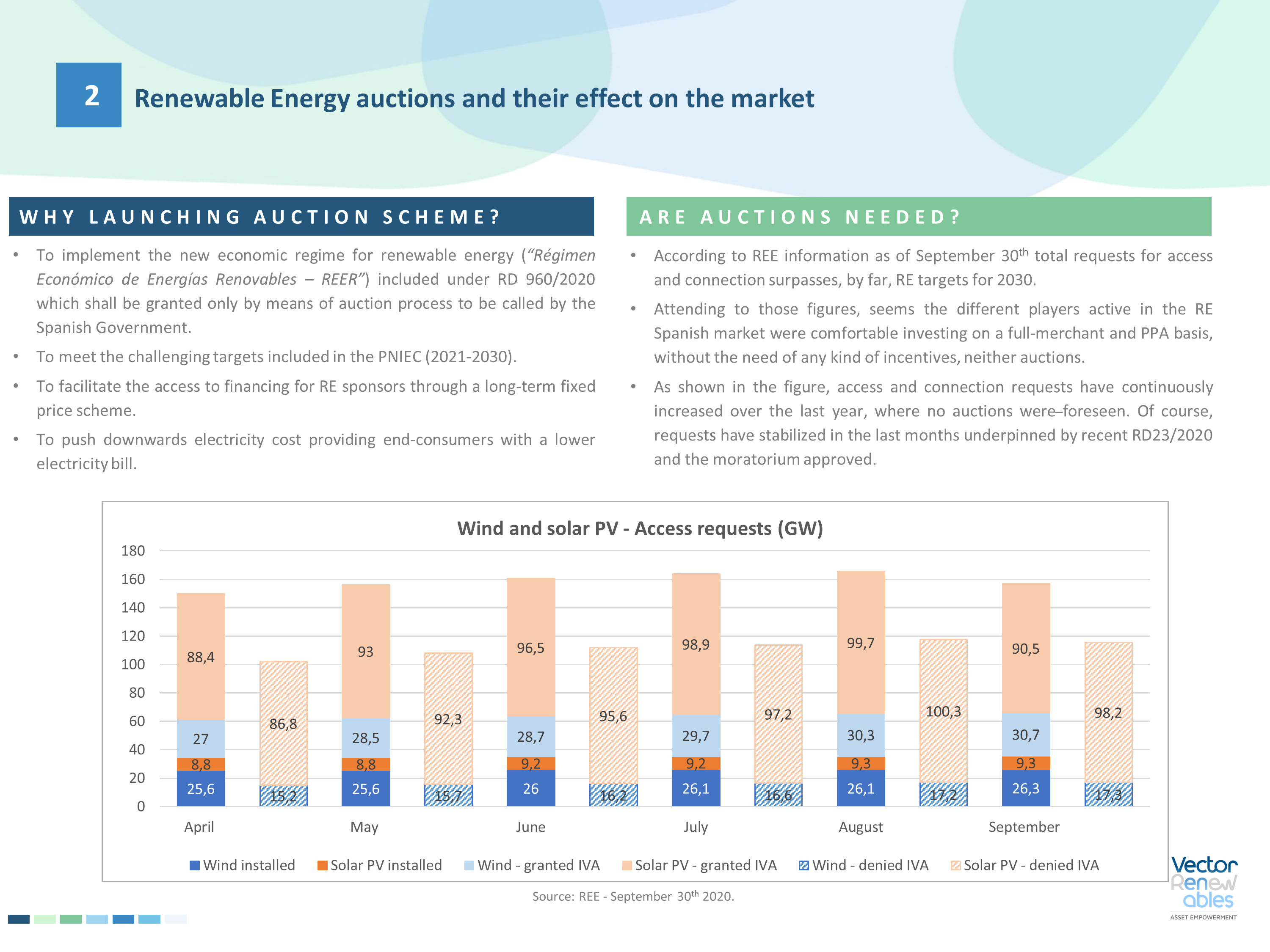 The bankability of the renewable energy projects

The capacity numbers with access and connection show how full merchant projects or with a PPA are already attractive enough without the need to take part in a renewable energy auction, although, according to the experts, their bankability, that is, the possibility of them being financed by a bank or financial institution, it is increasingly complicated due to the small number of banks that are willing to assume the market prices risk.

On the other hand, being awarded a lot of MW for a specific project does not mean that the project becomes directly bankable. According to the experts, if the prices at which the auction is awarded are too low, the projects will not be bankable.

Regarding the energy storage, although the technology is still a bit immature to be fully profitable, during the webinar it was concluded that it is a very positive aspect that specific incentives are introduced for the first time for renewable energy projects that include storage.

Next AleaSoft webinar, in 2021

The next webinar organised by AleaSoft will be held in 2021 and it will be the second part of the series “Prospects for the energy markets in Europe from 2021”. The meeting will take place on January 14 in English and Spanish. On this occasion, there will be the participation of speakers from the consulting firm PwC Spain, to analyse the PPA contracts for large consumers, in addition to the evolution of the energy markets and the financing of the renewable energy projects. The speakers will be Alberto Martín, Energy Sector Consulting Manager at PwC Spain, Reyes Gómez, Energy Sector Legal Services Manager at PwC Spain and Oriol Saltó i Bauzà, Manager of Data Analysis and Modelling at AleaSoft. The subsequent analysis table will also include Antonio Delgado Rigal, CEO of AleaSoft and Óscar Barrero, Partner responsible for Energy Sector Consulting at PwC Spain.

In addition to the webinars, at AleaSoft reports for the energy sector that allow the transformation of the energy market information into knowledge, intelligence, vision and opportunities are also prepared.