Beyond price records, August was a good month for photovoltaic energy

AleaSoft, September 1, 2021. August was a month marked by price records in both the European electricity markets and the electricity futures markets, as well as in the gas and CO2 emission rights markets. But renewable energies also stood out: photovoltaic energy broke historical records in Portugal and France, and the installation of new capacity increased the photovoltaic energy production in the Iberian Peninsula by 23% compared to August 2020.

Even with the seasonal decrease in solar radiation in the northern hemisphere during the month of August, both Portugal and France broke their monthly solar energy production record in August 2021. In Portugal, the production in August amounted to 214 GWh, 1.6% more than in July, which was the month that held the previous record. In the case of France, the monthly solar energy production totalled 1675 GWh, 1.2% more than in July.

In the rest of the analysed markets, the fall in Germany stands out, of 16% compared to July, while in Spain it fell by 7.7%. In Italy there was an increase of 4.1%.

In the year‑on‑year comparison with the month of August 2020, the increases in solar energy production in Spain and Portugal stand out, reaching 21% and 43%, respectively, as a result of the increase in photovoltaic energy capacity during the last twelve months. In the rest of the markets, the year‑on‑year variation was more moderate, between the fall of 3.0% in Germany and the increase of 13% in France. 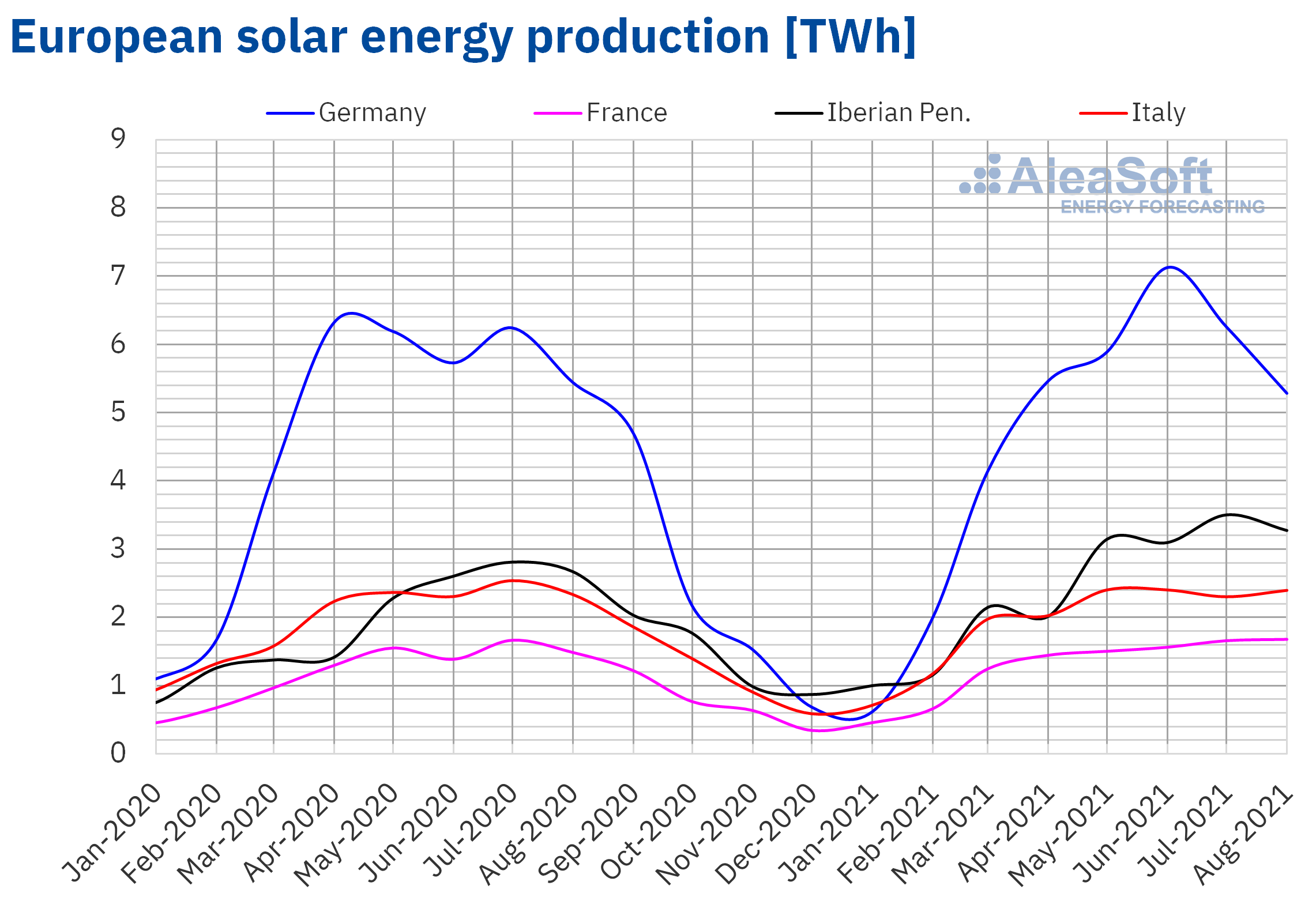 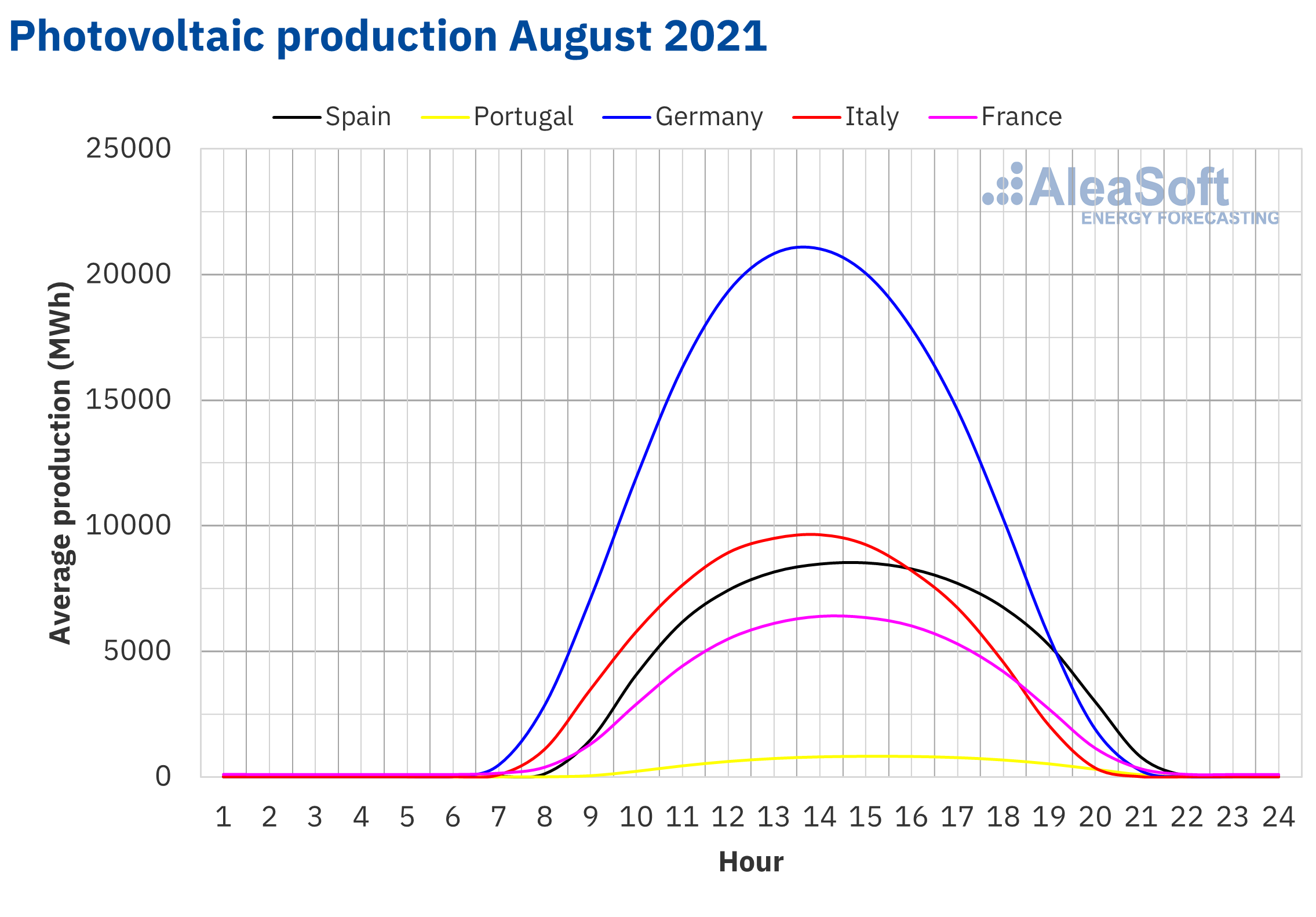 Although in the main European markets as a whole, the wind energy production increased by 9.2% in this month of August compared to the previous month, this global increase is due to the 37% increase in Germany. While in the rest of the countries, with much lower wind energy production than in the German country, there were falls, and some were very pronounced, for example, 25% in Portugal, 13% in Spain or 3.2% in France. In Italy, the variation was positive, but with a slight increase of 1.9%.

In the year‑on‑year comparison, with August 2020, the rise in wind energy production in Italy and Germany, of 20% and 19%, respectively, and the fall in Portugal, of around 16%, stand out. 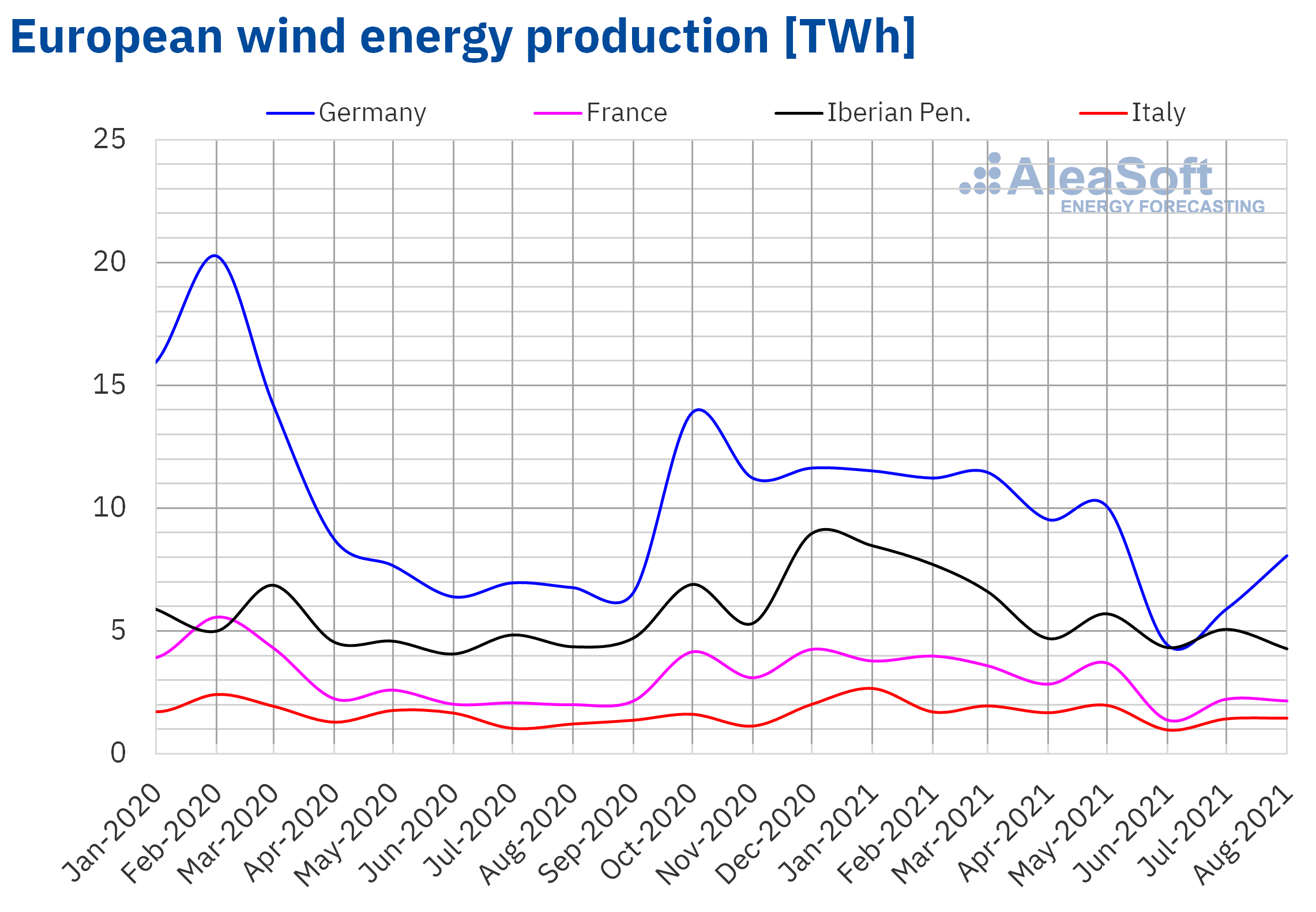 The electricity demand fell in this month of August in all the analysed European markets, with the sole exception of Belgium that registered a slight rise of 0.8%. For the rest of the markets, the fall was between 1.3% in Great Britain and 12% in Italy.

In year‑on‑year terms, compared to the demand of August 2020, the recovery of the economy can be seen. Despite being a month of August with milder temperatures than in 2020 in all countries, with values between 0.2 °C and 3.9 °C lower, the demand increased in most markets. The most pronounced increases were registered in Italy, 2.5%, and Germany, 2.7%. In the global of the main European markets, the year‑on‑year increase in electricity demand was 0.6%. 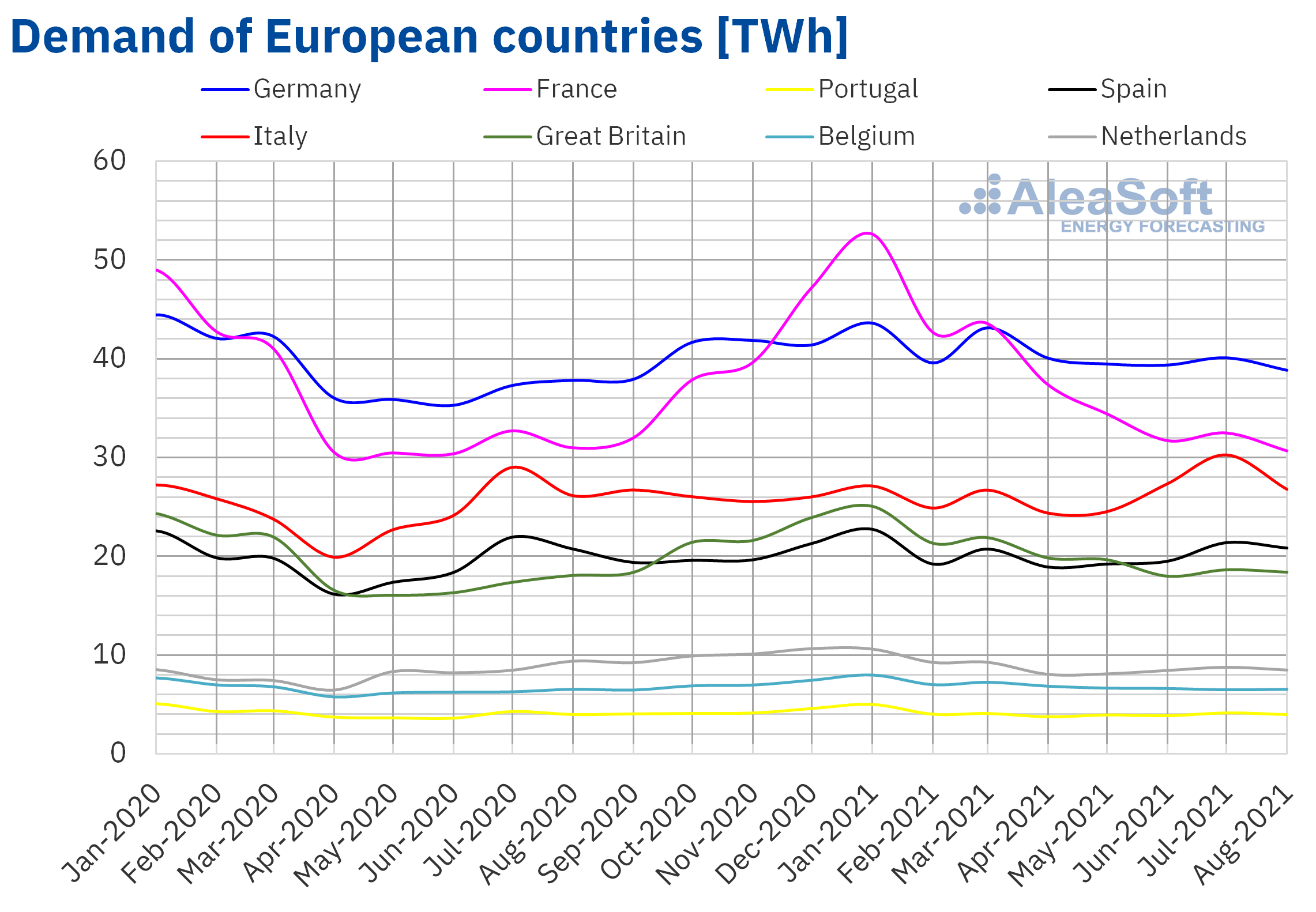 In August 2021, the monthly average price continued above €75/MWh in almost all the European electricity markets analysed at AleaSoft, in many cases exceeding €100/MWh. The exception was the Nord Pool market of the Nordic countries, with an average of €65.39/MWh. On the other hand, the highest monthly average price, of €125.22/MWh, was that of the N2EX market of the United Kingdom, followed by that of the IPEX market of Italy, of €112.40/MWh. In the rest of the markets, the averages were between €77.30/MWh of the EPEX SPOT market of France and €105.99/MWh of the MIBEL market of Portugal.

Compared to the month of July 2021, in August average prices rose in almost all the European electricity markets analysed at AleaSoft. In this case, the exception was the French market with a decrease of 1.4%. On the other hand, the highest price increase, of 21%, was registered in the Nord Pool market, while the lowest, of 1.6%, was that of the German market. The rest of the markets had price increases between 2.6% of the Belgian market and 15% of the MIBEL market of Spain and the N2EX market of the United Kingdom.

If the average prices for the month of August are compared with those registered in the same month of 2020, the prices increased significantly in all markets. The largest price increase was that of the Nord Pool market, of 644%. In the rest of the markets, the price increases were between 110% of the French market and 211% of the British market.

In August 2021, maximum monthly price records were reached in all the analysed markets, except in the French market, where the price decreased compared to the previous month. In Spain and Portugal the highest monthly average in the entire history of the market was registered, in Italy, at least since 2005. In Germany and Belgium the highest averages since October 2008 were registered. In the United Kingdom the highest monthly price at least since January 2010 was reached. In the case of the Nord Pool market, the monthly average was the highest since January 2011, while, in the market of the Netherlands, it was at least since April of the same year.

In August, despite the general decrease in demand compared to the previous month, the high gas and CO2 emission rights prices favoured the upward trend in the European electricity markets prices. These factors also contributed to the price increases compared to the same month of 2020. In this case, in addition, in many markets the demand also increased. 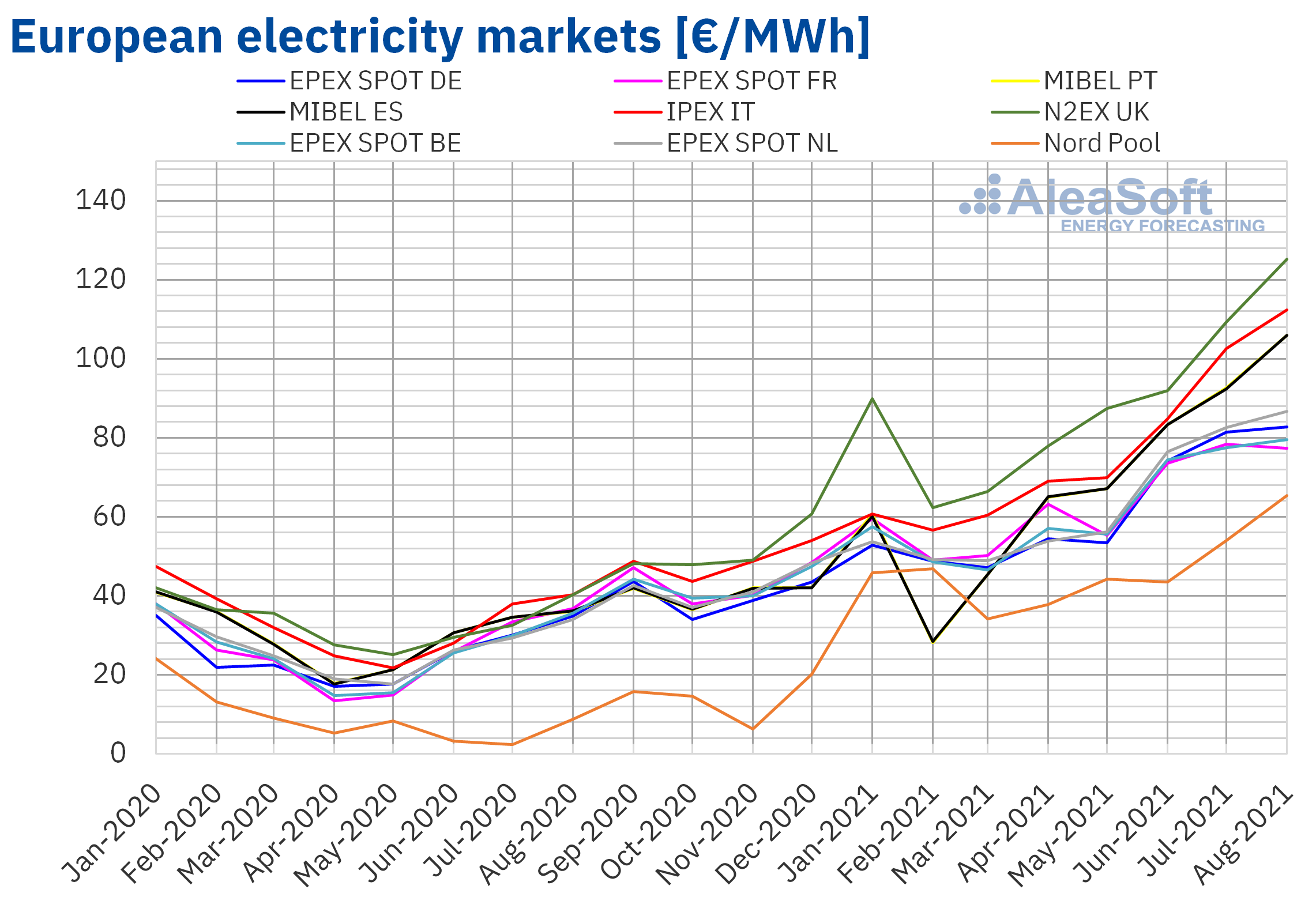 The electricity futures continued the upward trend during the month of August. An upward trend on par with that registered by the gas and CO2 emission rights futures. The price increases for the last quarter of 2021 reached 26% for the Nordic countries, for Spain and for Portugal if the settlement prices of the last sessions of July and August are compared. The rest of the markets were not far behind, with increases between 16% and 20%. Prices for Q4 ended the month with values that exceeded €130/MWh for Spain and Portugal, prices never seen in the electricity futures.

In the case of the futures for the year 2022, the prices are equally historical, exceeding €90/MWh in countries such as Italy and the United Kingdom, while the rest of the countries follow them very closely. As usual, the futures for the Nordic countries with prices slightly above €40/MWh stand out. The price increases during the month of August were between 16% and 23%.

In August, the start of the production increases agreed by OPEC+ in July favoured the price to fall compared to the previous month. The expansion of the delta variant of the coronavirus and the fear that the rise in inflation would end up slowing down the pace of demand recovery also exerted their downward influence on prices during the month of August. However, the decline in production in the United States due to Hurricane Ida favoured the recovery of the prices at the end of the month.

On the other hand, the OPEC+ meets on September 1. In the meeting, the convenience of continuing with the gradual increases in production agreed in July will be discussed. The pace of recovery in world demand, as well as the pressure from the United States, might favour these increases to continue until the end of the year. However, according to the OPEC forecasts, the supply could exceed the demand in early 2022.

As for the TTF gas futures prices in the ICE market for the Front‑Month, they maintained an upward trend for most of the month. Although this was interrupted in the third week of August under the influence of the announcement of the increase in gas supply from Russia this year thanks to the new Nord Stream 2 gas pipeline.

In the last days of August, the settlement prices of these futures exceeded €60/t, favoured by the reduction in auctions in the first week of September. 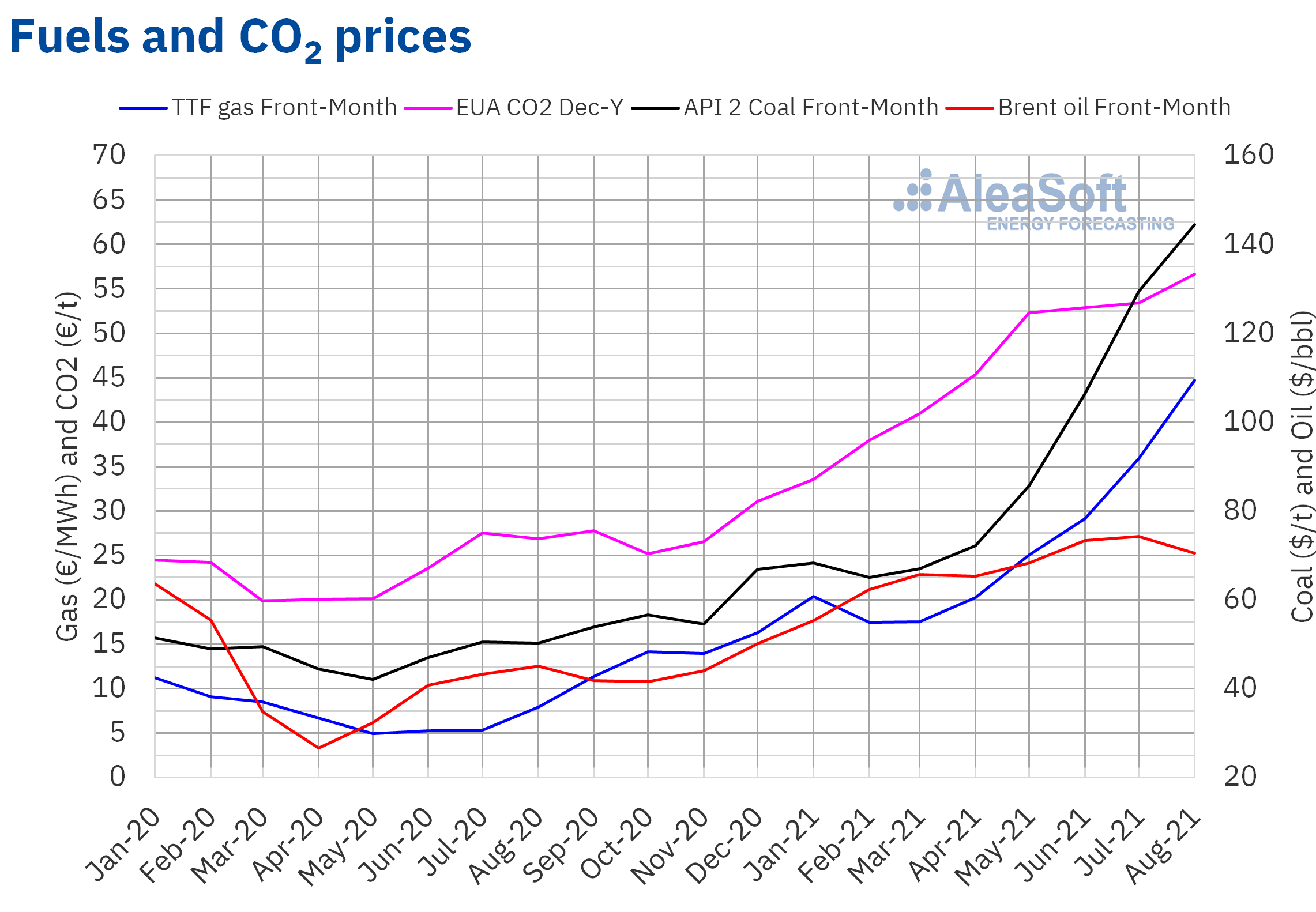 The situation of high prices in the energy markets registered in recent months in the European markets further highlighted the need to plan both the purchase and the sale of energy with a strategy in all time horizons based on scientific and reliable forecasting. Next Thursday, September 9, AleaSoft will give a workshop on the short‑term forecasting for agents that operate in the spot and futures markets. The short‑term forecasting is necessary to plan the offers in the spot and futures electricity markets.

In the workshop, the use and advantages of the Alea Energy DataBase (AleaApp) for the compilation, visualisation and analysis of energy markets data will also be explained. This online platform allows analysing the evolution of the main variables of the energy markets.

This October, after the summer break, the webinars are resumed within the AleaSoft’s dissemination framework. The next webinar will be held on October 7 and will feature speakers from Deloitte. In addition to analysing the evolution of the energy markets during the last twelve months, central topics for professionals of the energy sector will be discussed, such as the renewable energy projects financing and the importance of forecasting in audits and portfolio valuation.