AleaSoft, August 31, 2021. The energy markets price forecasting has existed for decades. AleaSoft analysed what would have been the consequences of relying on the long‑term price forecasting of the MIBEL market made more than ten years ago. What would have been the consequences for investors in renewable energy? And for large and electro‑intensive consumers?

This is the long‑term price forecasting for the Iberian MIBEL electricity market that AleaSoft provided to its customers at the end of October 2010. The previous market prices, until 2010, show an apparently chaotic behaviour. Even so, the AleaSoft models extracted the time structure of the series and its relationship with the explanatory variables and projected the expected future evolution of the prices based on the scenarios forecasted at that time. 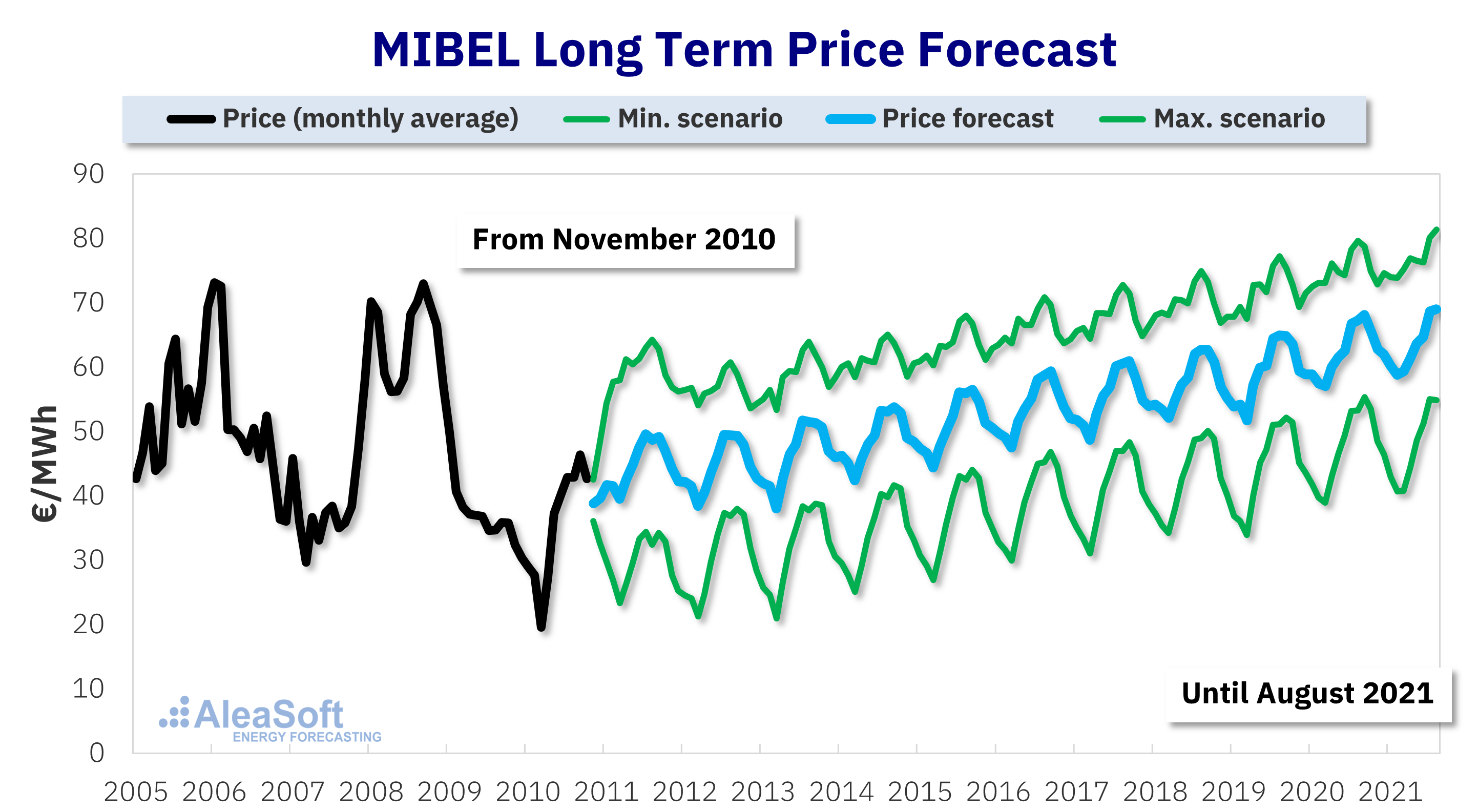 Long‑term price forecast for the Iberian MIBEL electricity market carried out at the end of October 2010 by AleaSoft.
The forecast values up to August 2021 are shown.
Source: AleaSoft

The forecast shows stable and coherent prices in the long‑term with seasonal fluctuations and a certain range of expected variability. This forecast shows the market equilibrium, a consequence of the balance between the energy supply and demand. Statistical models have this advantage of being able to project this equilibrium obtained from the historical price data and the rest of the variables and their projections.

On the contrary, models based on the optimisation of generation plants, for example, do not take into account the dynamism of this balance between supply and demand when projecting the prices in the mid- and long‑term. With these models, a simple increase in the expected renewable energy capacity can lead to a drop in market prices prolonged over time, a situation that is not realistic in the long‑term market.

How would the investments have been having this forecast in 2010?

It is logical to assume that, if the investors had had the forecasts shown in the previous graph at the end of October 2010, the financial models of the renewable energy projects would have shown a safe and profitable future to market for the generation plants. Who knows if, if such information had been available, the long crossing of the desert suffered by renewable energies, due to the famous blow to aid, would have been less severe and a more constant increase in renewable energy capacity would have been seen during the last decade.

And the large and electro‑intensive consumers?

With a stable future of the electricity market like the one shown by these forecasts, both the large energy consumers and the electro­‑intensive industry and the renewable energy projects would surely have been willing to sign more long‑term supply agreements. Probably the boom in PPA that we are currently experiencing would not have been a boom, but a constant increase in these long‑term contracts that, in fact, have always existed.

PPA offer many advantages to renewable energy projects. In most cases, it is thanks to PPA that the projects can obtain the necessary financing for the construction and start‑up of the plants.

But for consumers they also have very important implications. Among them, that of offering a less uncertain future, with fixed and predictable energy costs. Probably, having started signing PPA much earlier, the electro‑intensive industry would not be in a situation as delicate as the current one.

Is it necessary to trust the market equilibrium and the long‑term forecasting?

Looking at how the MIBEL market prices evolved since November 2010, it can be said that, if these forecasts had been taken as a reference at the time, they would have brought the expected results to a large extent. 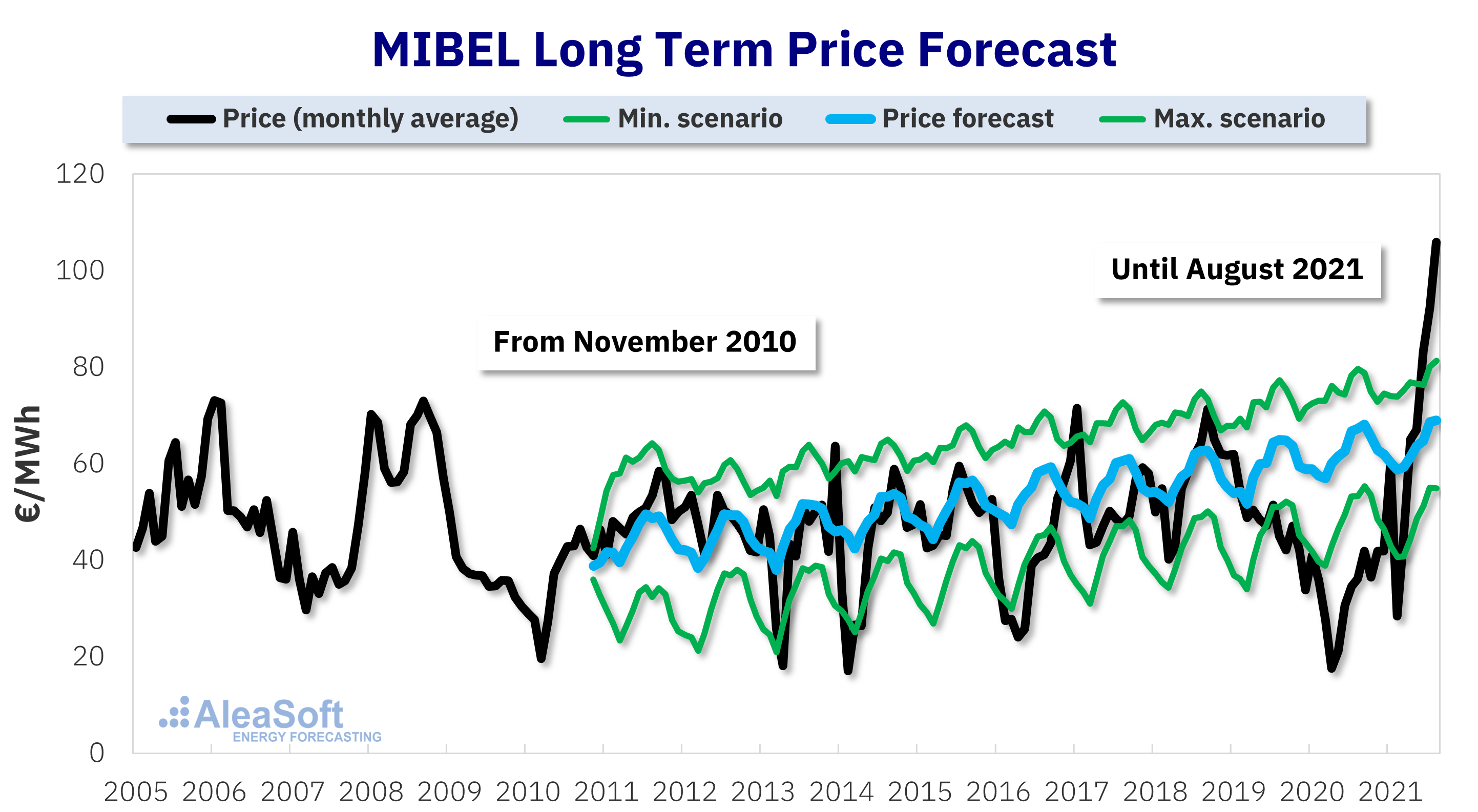 Comparison of the real prices of the Iberian MIBEL electricity market with the long‑term forecast carried out at the end of October 2010 by AleaSoft.
Source: AleaSoft

Prices oscillated, as expected, but they always did so around the central forecast, which is the one that shows the long‑term trend. After all the more or less exceptional situations that occurred in the last ten years, the prices equilibrium continues at the expected level. And it must be remembered that in the last decade there were periods of high and low prices of Brent, gas and CO2, periods of drought and periods of high renewable energy production, the interconnection capacity with France doubled, the demand decoupled of GDP, the CESUR auctions were created and subsequently abolished, the Special Tax on Hydrocarbons, better known as the green cent, was created in 2012, and in October 2018 the combined cycle gas turbine power plants and the cogeneration were exempted from the payment, also in 2012 the Tax on the Value of Electricity Generation (IVPEE) was created, also known as the 7% generation tax, which was suspended between October 2018 and March 2019 and currently in the third quarter of 2021, and there has been a global pandemic that came to paralyse the global economy.

Comparing the forecast of the end of October 2010 with the actual market prices, the historically high prices of July and August 2021 clearly stand out. If there is one thing to learn from the market prices history and the long‑term forecasts, it is that prices always return to the equilibrium value. Clearly, the current situation of high prices is an anomaly, which occurs after another even more anomalous period such as the fall in prices due to the global crisis caused by the COVID‑19 pandemic.

The lesson to be learned is to trust the market and the long‑term forecasts that tell us that, after an anomalous episode, prices will return to their course.

AleaSoft’s analysis on the prospects for the Iberian energy markets

In this first week of September, AleaSoft is updating the long‑term forecasts for all European electricity markets to incorporate the updated scenarios with the high prices registered during the months of July and August.

To discuss and debate the importance of the long‑term forecasting, a new AleaSoft’s webinar will be held on October 7 with the participation of speakers from Deloitte. In addition to analysing the evolution of the energy markets during the last twelve months, central topics for professionals of the energy sector will be discussed, such as the renewable energy projects financing and the importance of the forecasting in audits and portfolio valuation.