AleaSoft, January 23, 2020. The European electricity markets prices rose, standing out those of the EPEX SPOT market with increases of more than €10/MWh, mainly due to the low temperatures and their influence on the demand. The solar energy production rose in Italy and in Germany it continued to be high for this time of year, while the wind energy production rose in the Iberian Peninsula. The gas and coal futures for February continue at record lows. The prices are expected to fall next week as the temperatures will be less cold.

The production, this month of January 2020 until yesterday, January 22, was higher than that registered in the same period of 2019 in all European markets. The upward variation is still led by the German market with an increase of 56%. In the rest of the markets the increase was between 12% and 19%. 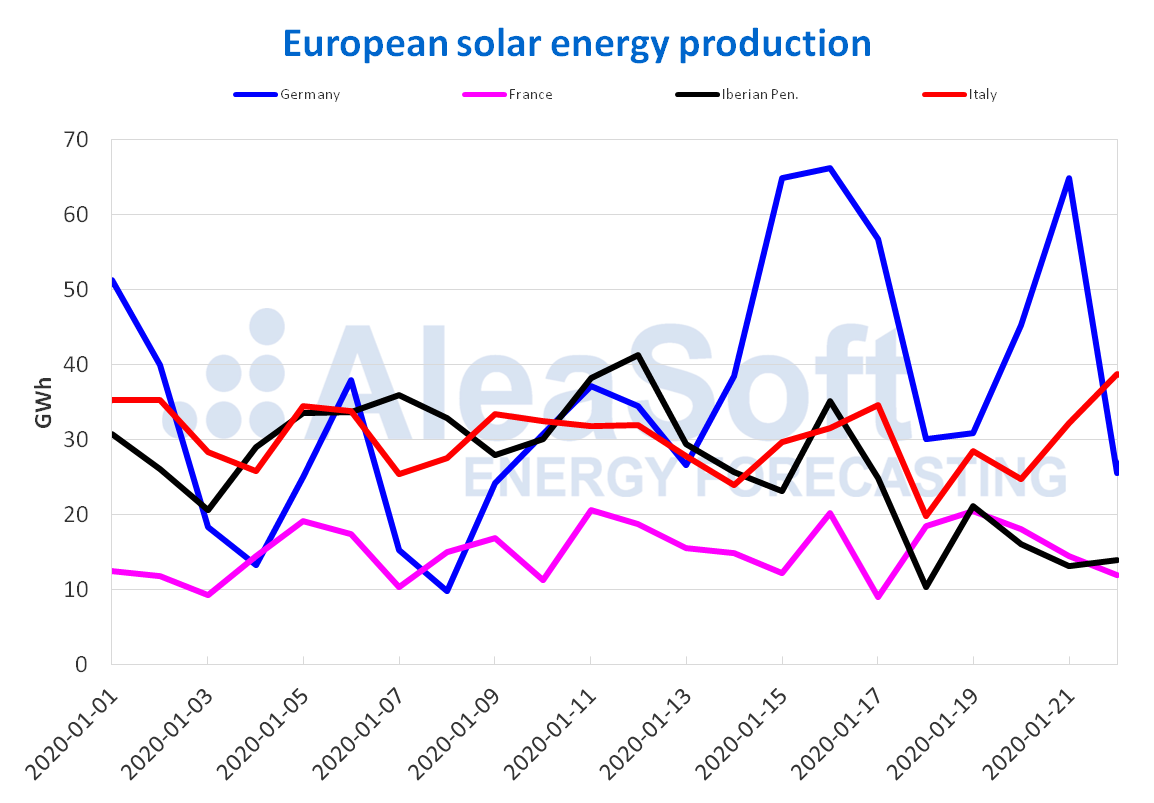 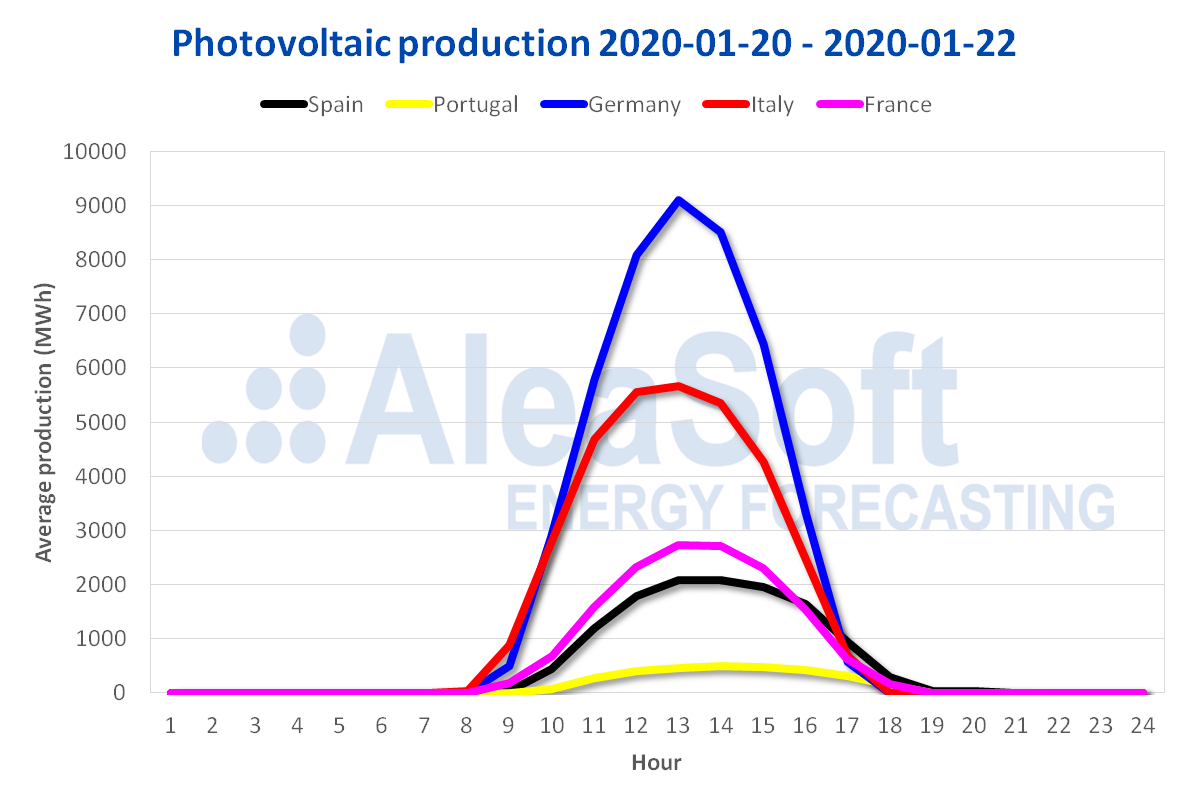 According to the year‑on‑year analysis, so far this January 2020 the wind energy production decreased in Italy, Germany and the Iberian Peninsula. The decrease in Italy was 28%, in Germany 3.4% and in the Iberian Peninsula 0.3%. On the other hand, the French market had an increase of 48%.

At the end of this week, the wind energy generation is expected to be higher than that registered last week in the Italian market. On the contrary, the AleaSoft‘s analysis indicates that this week’s production will end up being lower than that of last week in the rest of the analysed markets. Increases in wind energy production in Germany and similar values to those of this week for the rest of the markets are expected for the next week. 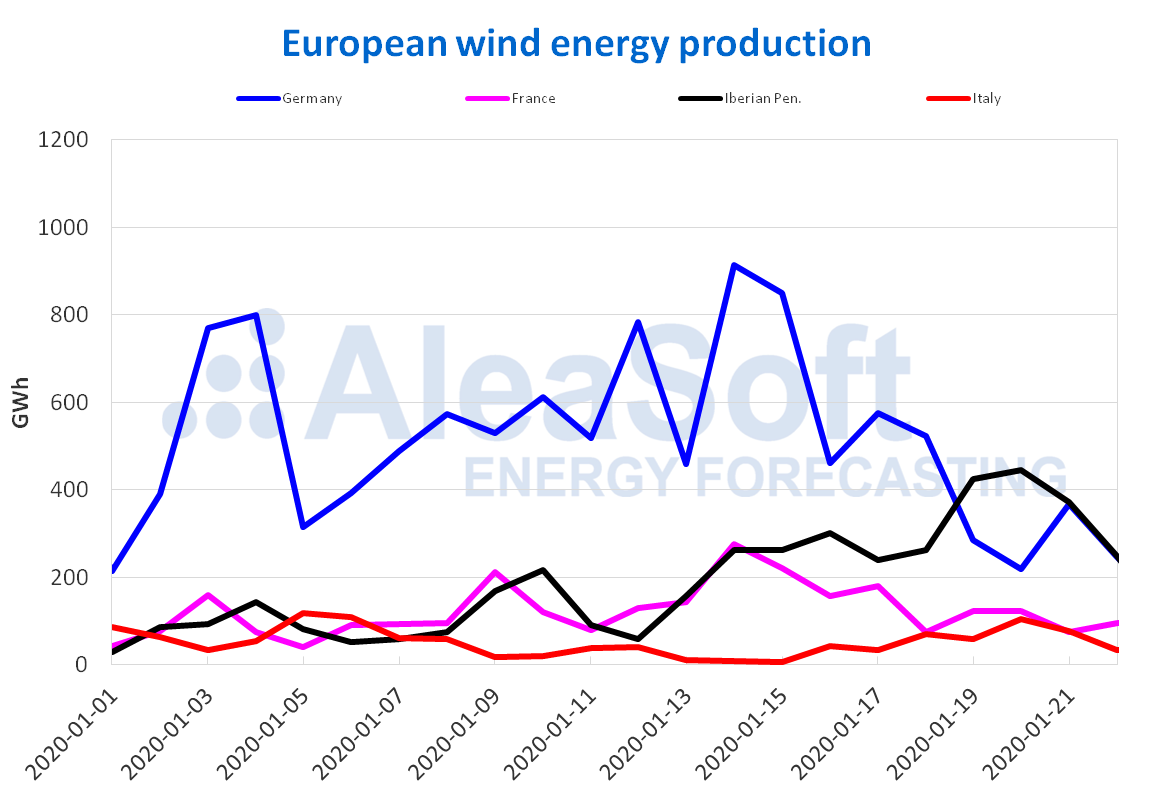 The electricity demand increased in a large part of the European countries the first days of this week compared to the same period of the previous week. This increase was mainly due to a decrease in average temperatures. In France the rise was 12%, while in the Netherlands and Great Britain it increased by 10% in both cases. The only countries in which their demand decreased were Portugal and Germany, by 3.2% and 1.4% respectively. 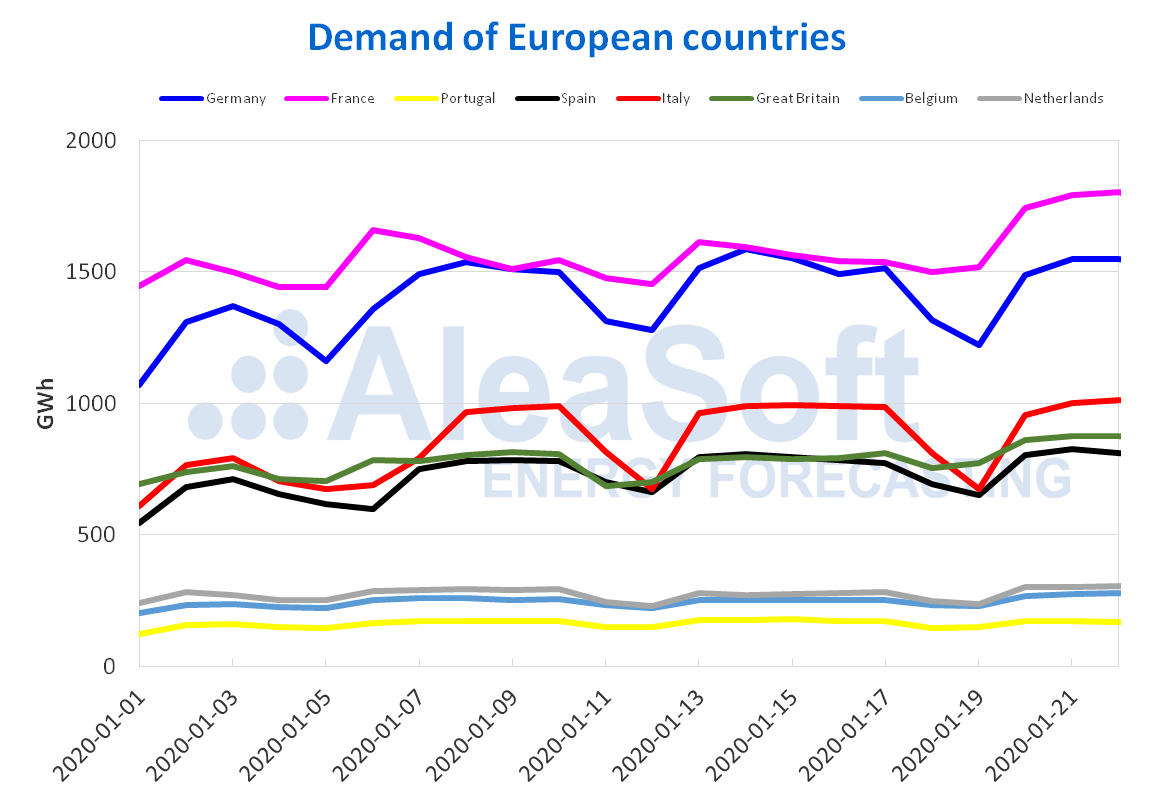 The average solar energy production in Spain, which includes the photovoltaic and solar thermal energy, fell 10 GWh from Monday to Wednesday of this week compared to the average of the previous week, which represented a 47% decrease. On the other hand, there was a 13% year‑on‑year increase in the first 22 days of January.

On the other hand, this week the wind energy production exceeded the average of last week, reaching an increase of 32%. Although the production continues to rise week after week so far this month, a year‑on‑year fall of 3.4% was registered for the days elapsed of January 2020.

The electricity demand of Mainland Spain from January 20 to January 22 had a variation of 1.9% compared to the same period of last week.

At the moment all nuclear power plants are working at full capacity and the nuclear energy production maintains a daily level close to 170 GWh. 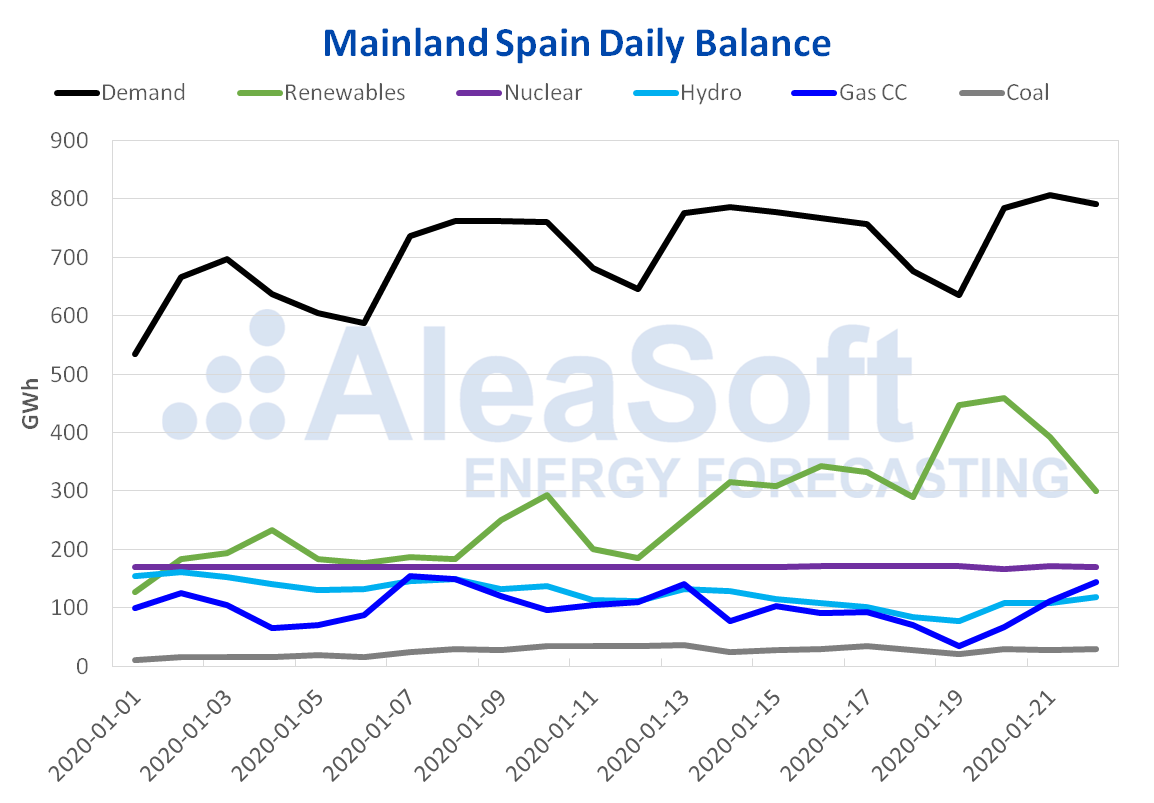 The level of the hydroelectric reserves decreased 0.6% compared to the previous report. The reserves currently have 12 576 GWh, which represents 55% of the maximum available capacity, according to data from the latest Hydrological Bulletin of the Ministry for Ecological Transition.

So far this week, the European electricity markets prices increased in most markets compared to the same days of the previous week. The increases were between 6.8% of the MIBEL market of Portugal and 48% of the EPEX SPOT market of Germany. Most of the markets registered an upward trend, where the prices were increasing during the first four days of this week from €45/MWh to approximately €51/MWh and were fairly coupled between them, except at specific times the MIBEL market of Spain and Portugal and the EPEX SPOT market of Germany.

In the EPEX SPOT markets of Germany, France, Belgium and the Netherlands, the average prices for the days elapsed this week exceeded the average prices of last week by more than €10/MWh, for both the first four days and of the whole week. These increases were supported by the low temperatures that were registered since last weekend that caused the increase in electricity demand in much of European markets.

The exceptions were the Nord Pool market of the Nordic countries and the IPEX market of Italy, where the prices fell by 13% and 9.1% respectively, due to higher renewable energy production than last week in both markets. The Nordic countries market, with a downward trend and an average price of €21.39/MWh, continues to be the market with the lowest prices in Europe. On the other hand, the Italian market, with an average of €48.99/MWh and despite the drop in prices compared to the week of January 13, was the one with the highest price. 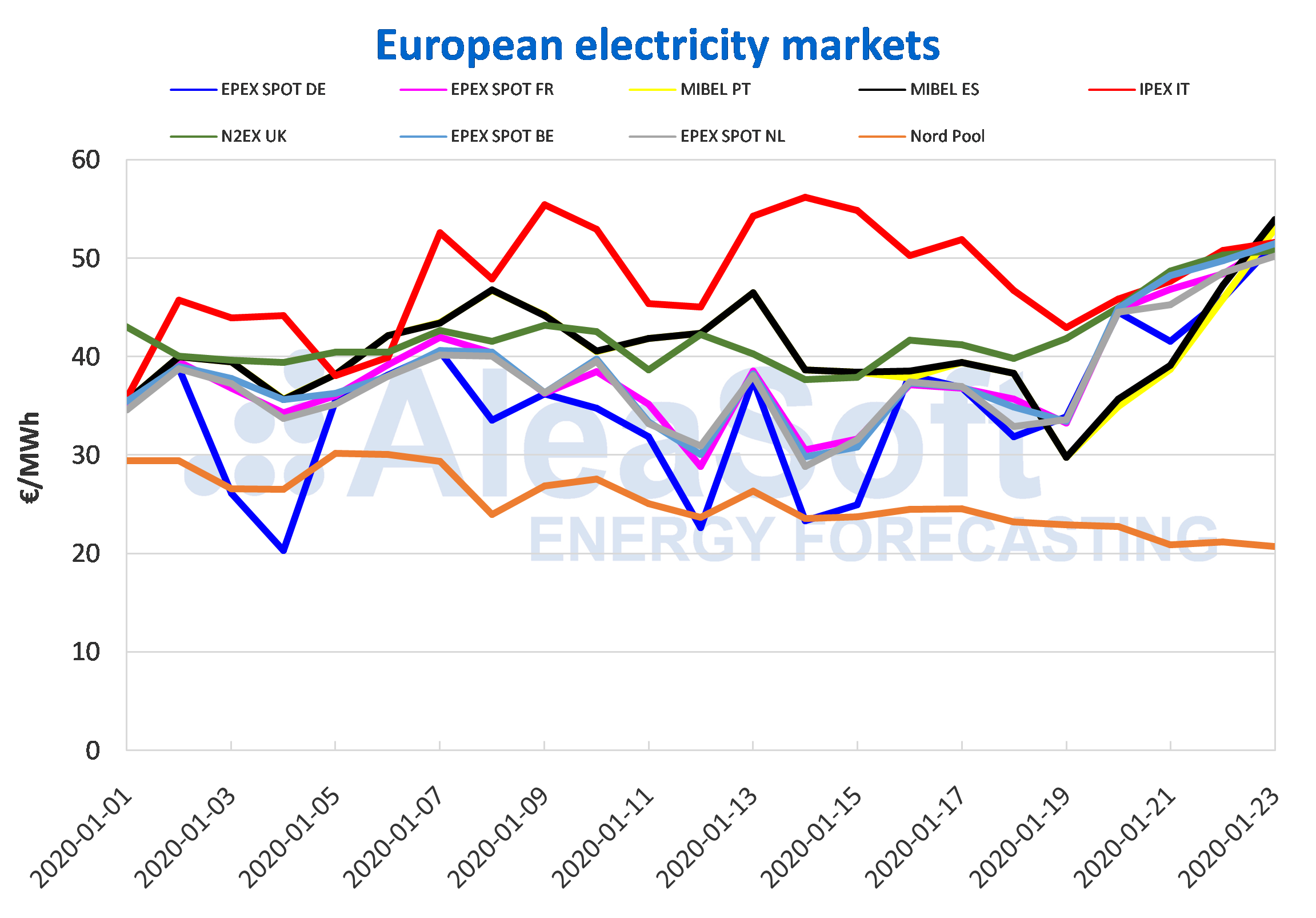 At AleaSoft it is expected that in the rest of the days of this week the prices in most European markets will decrease due to lower demand over the weekend. And for the next week lower prices are expected, mainly due to less cold temperatures that will lower electricity demand. On the other hand, it is expected that next week the prices of the different markets will not be as coupled as those of this week.

The MIBEL markets of Spain and Portugal were the ones with the lowest increase during this week compared to the previous week, of 8.6% and 6.8% respectively. With average prices of €43.01/MWh in the Portuguese pole and €44.01/MWh in the Spanish pole, they were the second and third in the list of markets with the lowest prices during the first four days of this week. The high wind energy production during the last weekend and the first two days of this week lowered the prices for those days below €40/MWh. On the other hand, the decrease in wind energy production for the subsequent days increased the prices, until reaching this Thursday, January 23, €53.01/MWh for the Portuguese pole and €53.95/MWh for the Spanish pole, the highest of these markets from the beginning of the year until January 23. In addition, the price of the Spanish market for that day was the highest in the continent.

At AleaSoft, the prices are expected to fall during the rest of the week and the next week, favoured by the decrease in demand during the weekend, less cold temperatures and a slight recovery in production with renewable technologies.

This week, the European electricity futures prices for the second quarter of 2020 had different behaviours in several markets. On the one hand, the OMIP market of Spain and Portugal, together with the EEX market of Germany, France and Spain, presented price increases, after several weeks down. The ICE market of Belgium, meanwhile, shows a practically constant price with a net variation in the session on Wednesday, January 22, of only €0.01/MWh compared to the previous Friday. On the other hand, there is the Nordic region, which in both the NASDAQ and ICE markets continues to negotiate downwards its electricity future for the next quarter, at a price close to €20/MWh. If the climate outlook for the Nordic area remains so humid and temperate, the prices may fall further.

As for the futures for the next year 2021, the recovery of the price of the Iberian region stands out above all other markets, both in the EEX market of Spain and in the OMIP market of Spain and Portugal. The rest of the markets registered a net decrease of between 1.2% and 5.9% compared to the previous Friday. However, the session of yesterday Wednesday, January 22, settled in several markets with a price higher than the previous session.

The Brent oil futures prices for the month of March 2020 in the ICE market on Monday, January 20, registered a settlement price of $65.20/bbl, a value $0.35/bbl higher than that of the previous Friday. However, a downward trend began on Tuesday and on Wednesday, January 22, the settlement price was $63.21/bbl, the lowest so far this month.

These declines are influenced by the fact that the production and reserves levels of the United States can compensate for the declines in supply from Libya and Iraq. On the other hand, a possible decline in demand with the coronavirus outbreak that is affecting China may lead to further price declines in the coming days.

The TTF gas futures prices in the ICE market for the month of February 2020 the first days of this week recorded historical lows again. Despite the recovery of 2.0% compared to the value of the previous day in the settlement price of this Tuesday, on Wednesday, January 22, the settlement price was €10.45/MWh, the lowest of the last two years.

The TTF gas prices in the spot market the first days of this week were lower than those of the same days of last week. The index price reached for Thursday, January 23, was €10.63/MWh, the lowest since the beginning of November.

The API 2 coal futures in the ICE market for the month of February 2020 the first days of this week registered settlement prices below $50/t. On Monday, the lowest value, of $49.10/t was reached, which is also the lowest in the last two years. On Tuesday the price recovered to $49.45/t, a price that remained on Wednesday.

The effects of the fires and the floods in Australia’s mining areas could end up affecting the supply and prevent the prices from continuing to decline. However, this month China announced new restrictions on the importation of coal for this year, that will also exert its influence on the evolution of the prices.

The CO2 emission rights futures prices in the EEX market for the reference contract of December 2020 the first days of this week remained stable around €25/t and every day settlement prices higher than those of the same days of last week were registered. These increases may be related to the decrease in temperatures and lower wind energy generation levels in Germany. 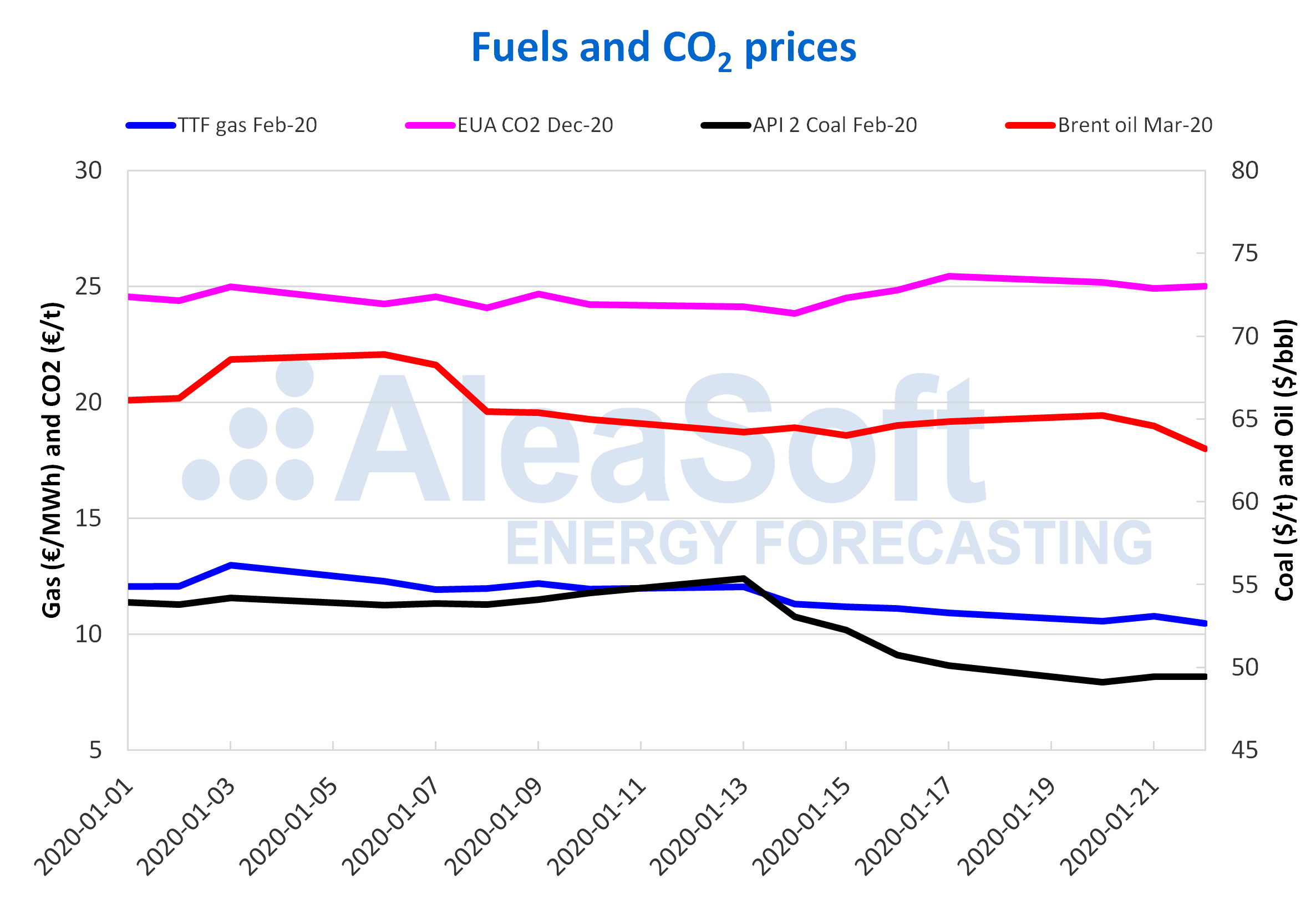