AleaSoft, July 5, 2021. In the week of June 28, the European electricity markets prices rose, registering weekly values above €87/MWh in almost all of them. In the United Kingdom and Italy most of the days prices exceeded €100/MWh and there were daily maximums since at least 2015 in the IPEX and MIBEL markets. The electricity demand increased in most markets, which was added to the record prices reached in the gas and CO2 markets as causes of the increases in the electricity markets.

The solar energy production during the week of June 28 increased by 9.1% in the Iberian Peninsula compared to the previous week. However, in the German market, the production fell by 9.3%, while in the markets of France and Italy the fall was 1.7% and 0.8% respectively.

For the week starting on July 5, the AleaSoft’s solar energy production forecasting indicates that it will increase in the Italian market, but a reduction is expected in the Spanish market and little variation in the German market. 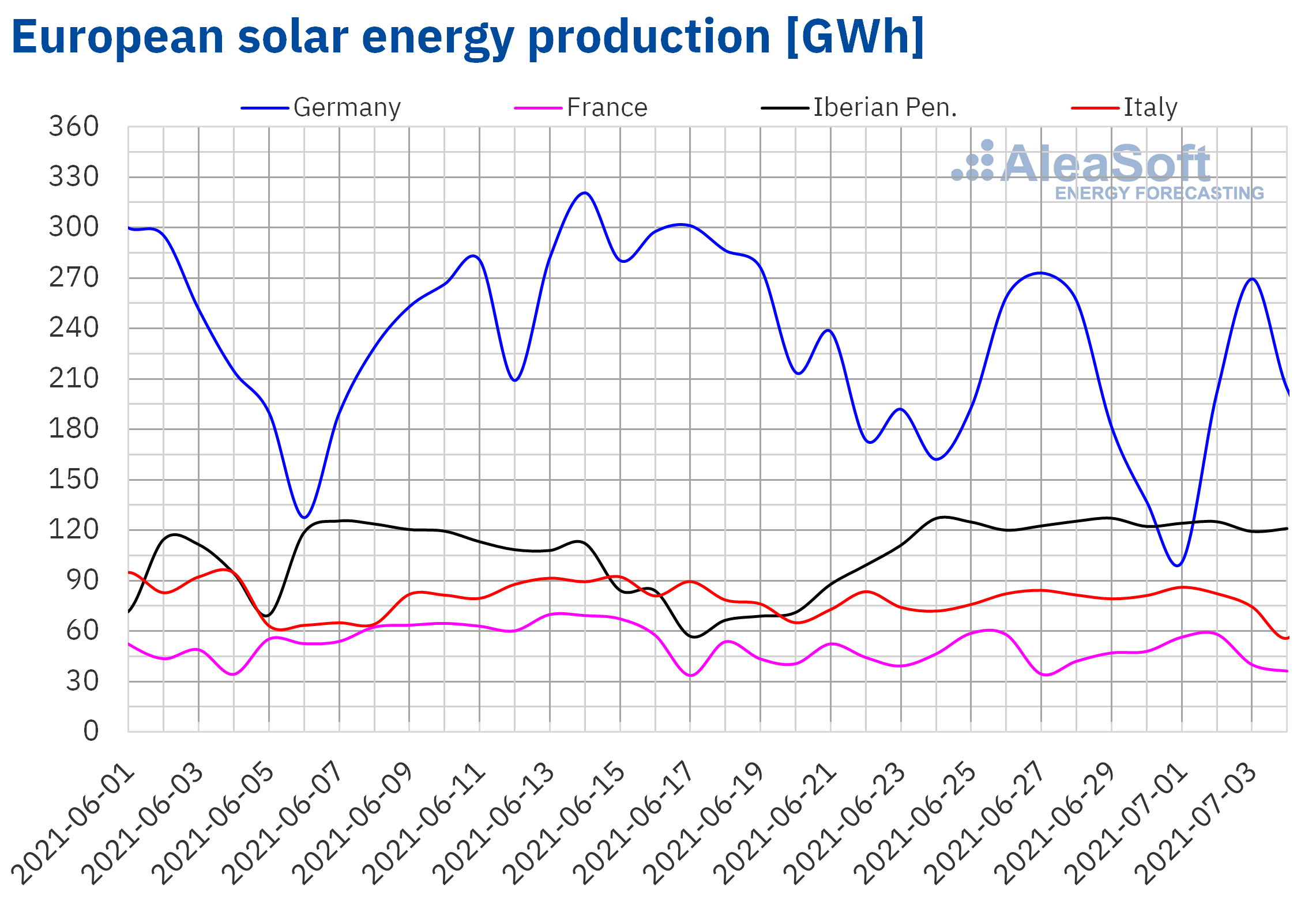 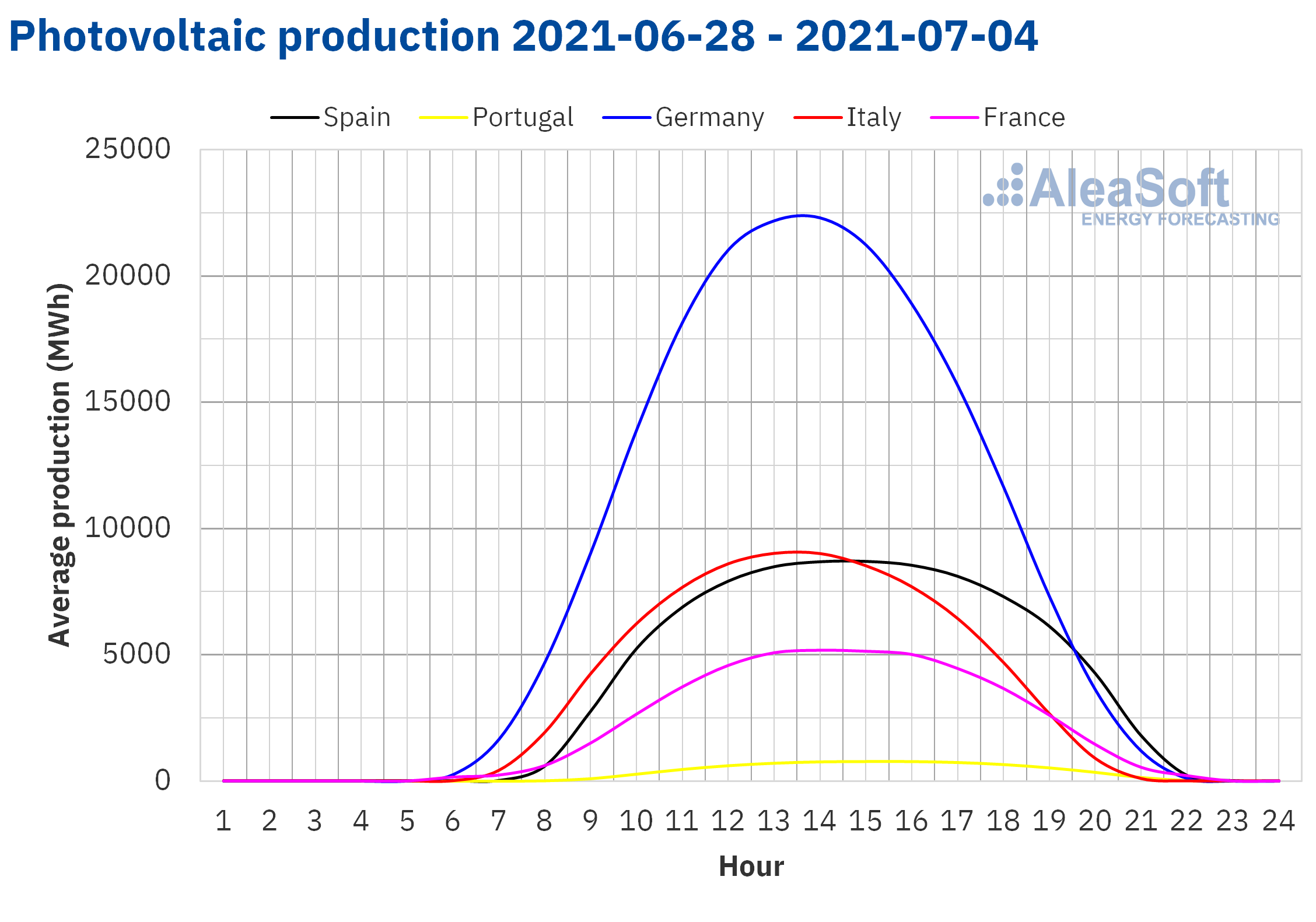 During the week of June 28 to July 4, the wind energy production increased by 49% in the Italian market and 39% in the German market compared to the previous week. On the contrary, in the markets of Spain, Portugal and France, the production fell between 17% and 29%.

For the week of July 5, the AleaSoft’s wind energy production forecasting indicates that the production with this technology will be higher than that registered the previous week in the French market and in the Iberian Peninsula. On the other hand, a reduction in production is expected in the Italian market and little variation in the German market. 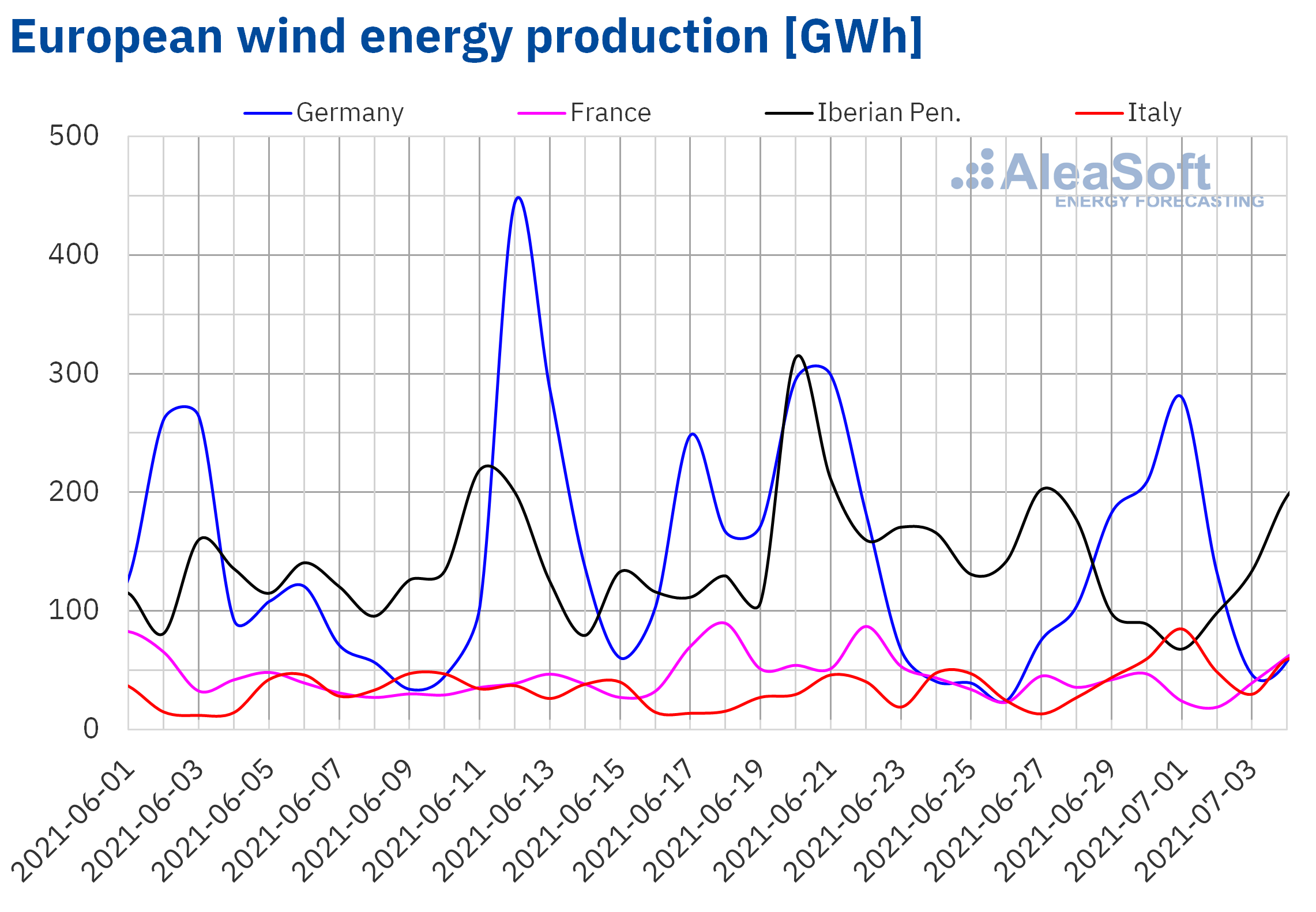 The electricity demand recovered in most of Europe’s electricity markets during the week of June 28. As the AleaSoft’s demand forecasting indicated in the report made on June 28, the increase in average temperatures was the factor that most influenced these increases in demand. Average temperatures registered rises that reached up to 2.2 °C in Spain and Great Britain.

Regarding the demand, the largest increase was that of the Spanish market, where the 6.2% rise was also favoured by the effect of the San Juan holiday on June 24, during the preceding week. Correcting this effect, the rise in Spain was 5.4%. In the rest of the markets the increases were between 0.3% and 2.0%, with the exception of the Italian market where there was a decrease of 1.7%.

For the week of July 5, the demand is expected to rise in Spain and Portugal and to maintain similar or lower values in the rest of the European markets, according to the AleaSoft’s demand forecasting. 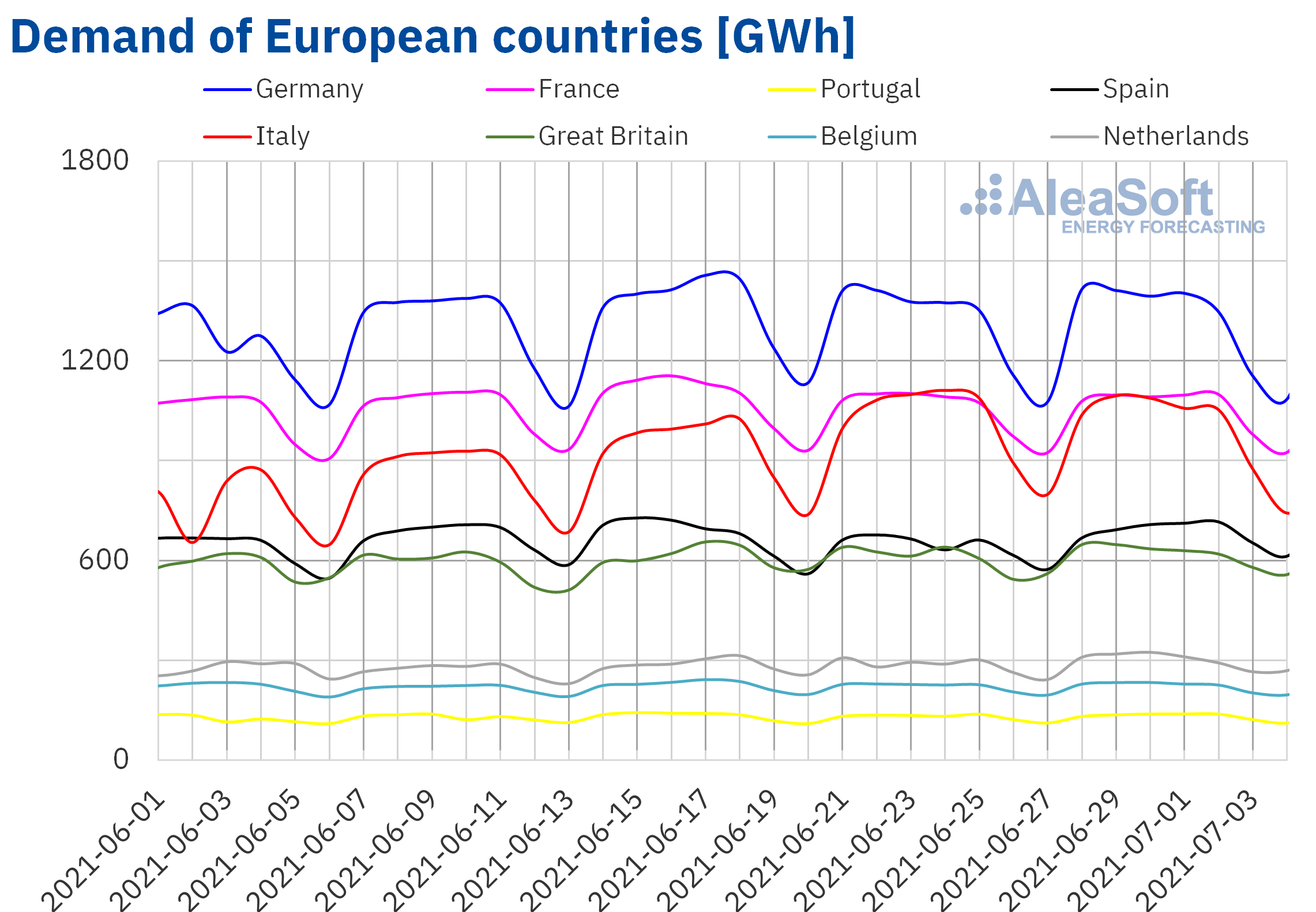 In the first week of July, the highest weekly average price was that of the N2EX market, of €106.08/MWh, followed by the average of the IPEX market, of €103.55/MWh. On the other hand, the lowest average was that of the Nord Pool market of the Nordic countries, of €51.99/MWh. In the rest of the markets, the prices were between €87.94/MWh in the EPEX SPOT market of France and €91.39/MWh in the MIBEL market of Spain and Portugal.

During the week of June 28, the daily prices exceeded €100/MWh every day in the British market and most of them in the Italian market. In the case of the IPEX market, on June 29 a price of €112.11/MWh was reached, which was the highest in this market since July 2015. On the other hand, in the case of the MIBEL market, on Friday, July 2, a daily price of €99.80/MWh was reached, which is the second highest in its history. 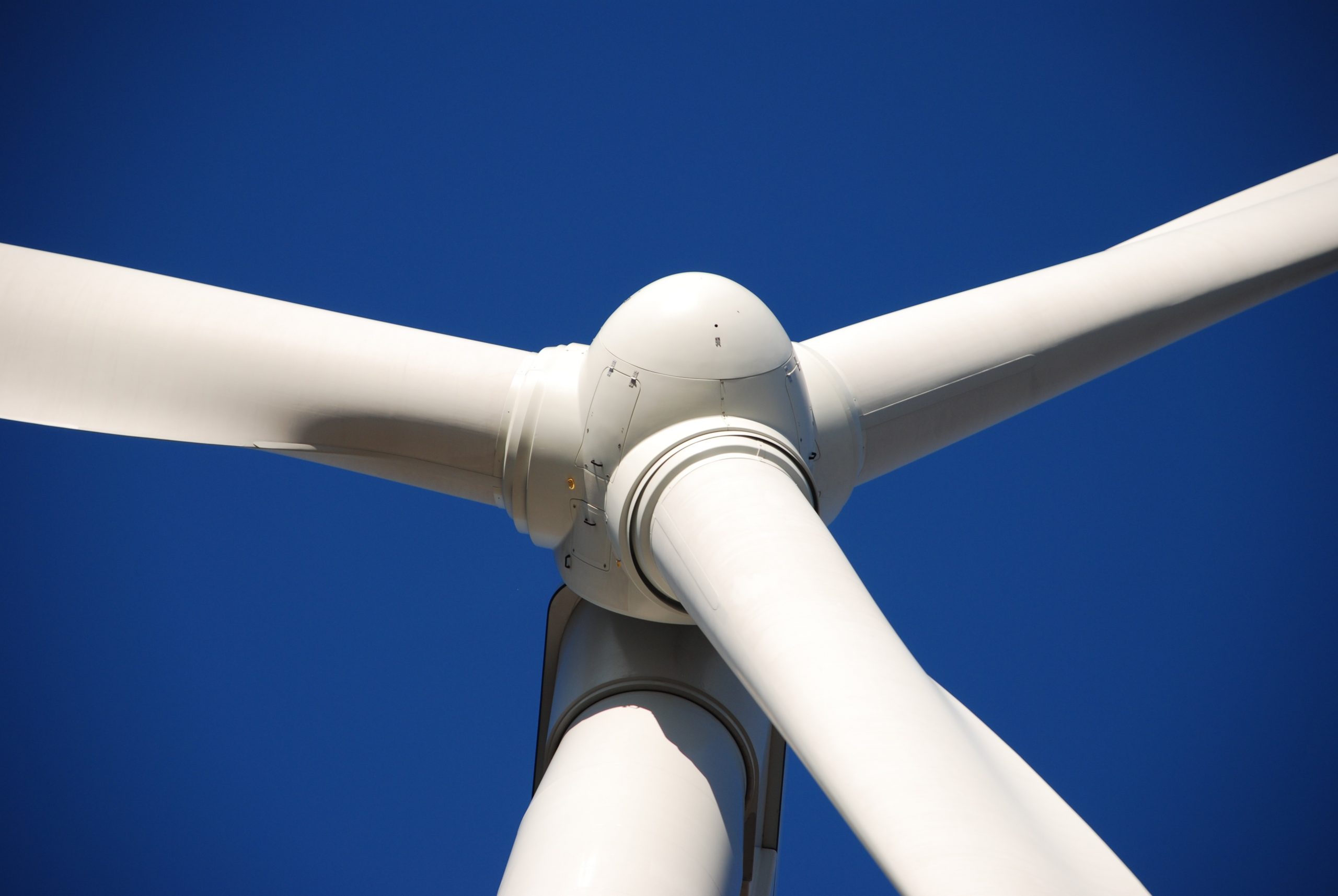 The AleaSoft’s price forecasting indicates that during the week of July 5, prices might fall slightly in most European markets. However, the increase in demand and the decrease in solar energy production might favour the prices to continue increasing in the Iberian market. 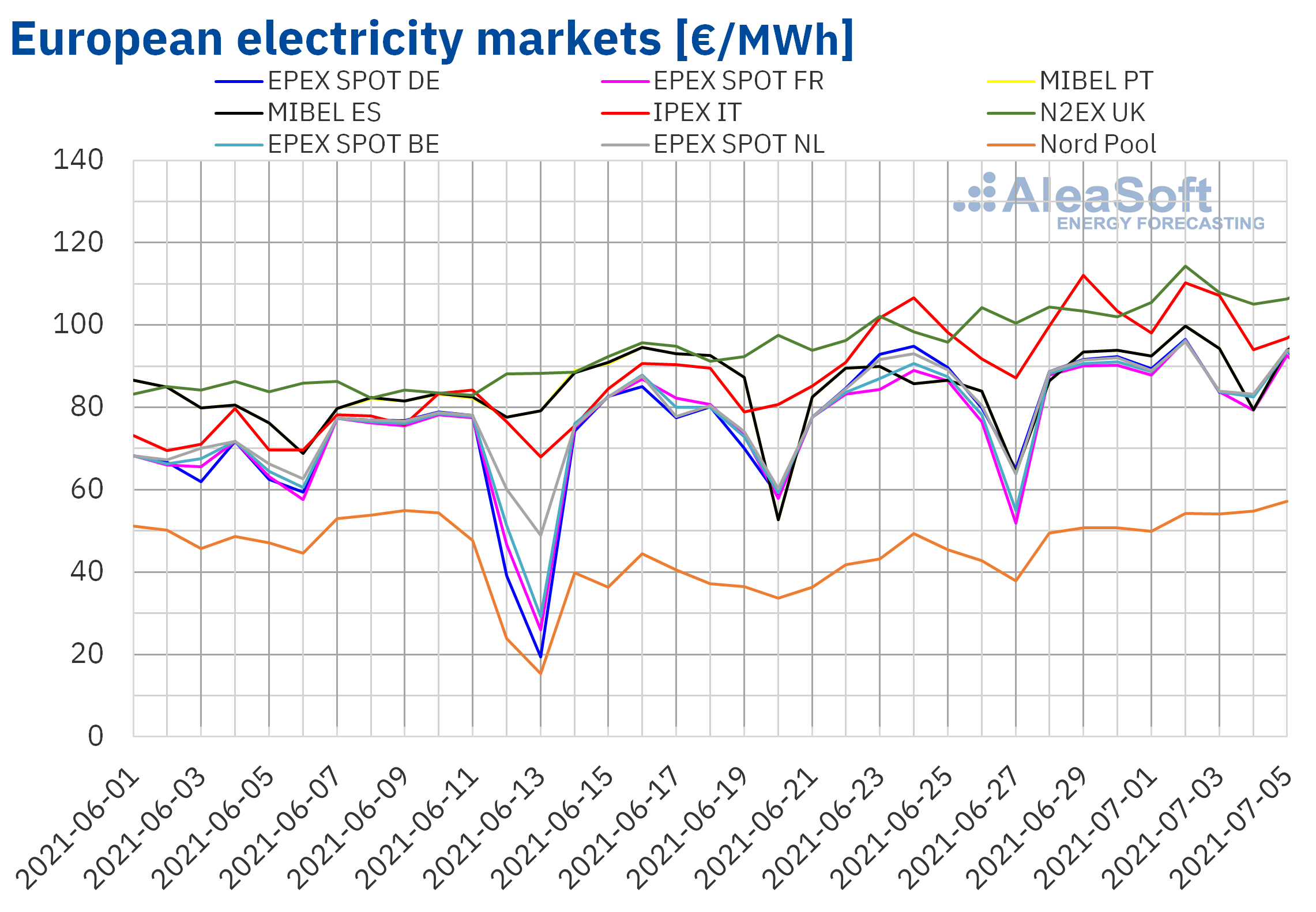 During the first week of July, the electricity futures prices for the last quarter of 2021 rose in almost all the European futures markets analysed at AleaSoft. The ICE and NASDAQ markets of the Nordic countries were the exception, with declines of 1.8% and 3.0% respectively. In the rest of the markets, the increases were between 7.2% registered in the EEX market of the United Kingdom and 10% of the same market for Spain.

As for the product of the year 2022, the behaviour of prices was similar. Increases in all markets except in those of the Nordic region, where the decreases were 1.4% in the ICE market and 1.9% in the NASDAQ market. Once again, the EEX market of Spain was the one with the highest rise, with an 8.7% increase and closely followed by the OMIP market of Portugal with 8.5%. The EEX market of the United Kingdom also repeats as the one with the lowest rise, with an increase of 3.9%.

On Monday, June 28, the Brent oil futures for the month of September 2021 in the ICE market registered a settlement price of $74.14/bbl. This price was 1.6% lower than that of the last session of the previous week. However, the rest of the week the prices increased. As a result, on Friday, July 2, a settlement price of $76.17/bbl was reached, which was 1.0% higher than that of the previous Friday and the highest in the last two years.

The demand continues to recover, favoured by the increase in mobility, which exerts its upward influence on the Brent oil futures prices. On the other hand, no agreement was reached on the increase in production for the coming months at the OPEC+ meeting of the first week of July. For this reason, the negotiations will continue in the week of July 5. The blockade in the negotiations occurred due to the demand by the United Arab Emirates that its quota of national production was increased, reflecting a greater production capacity, which was refused by the rest of the countries. In response, the United Arab Emirates blocked the Russian‑Saudi Arabian settlement proposal. An OPEC+ agreement to increase its production together with a possible lifting of sanctions on Iran’s crude exports would limit the price increases in the coming months.

As for the TTF gas futures prices in the ICE market for the month of August 2021, during the first week of July they were higher than those of the previous week, registering increases on most days. The maximum settlement price of the week, of €36.14/MWh, was reached on Thursday, July 1. This price was 14% higher than that of the previous Thursday and the highest in the last two years. On Friday, the prices fell slightly to €35.83/MWh. But on Monday, July 5, the futures for the month of August were trading above €36/MWh again.

Regarding the CO2 emission rights futures prices in the EEX market for the reference contract of December 2021, during the week of June 28 they increased until reaching a settlement price of €57.65/t on Thursday, July 1. This price was 4.6% higher than that of the previous Thursday and the highest in the history. However, on Friday there was a slight decrease to €57.35/t.

The high gas prices combined with the leaks to the press about the European Commission’s proposals regarding the policies to meet the emission reduction targets in the coming years favoured the increase in emission rights prices during the first week of July. 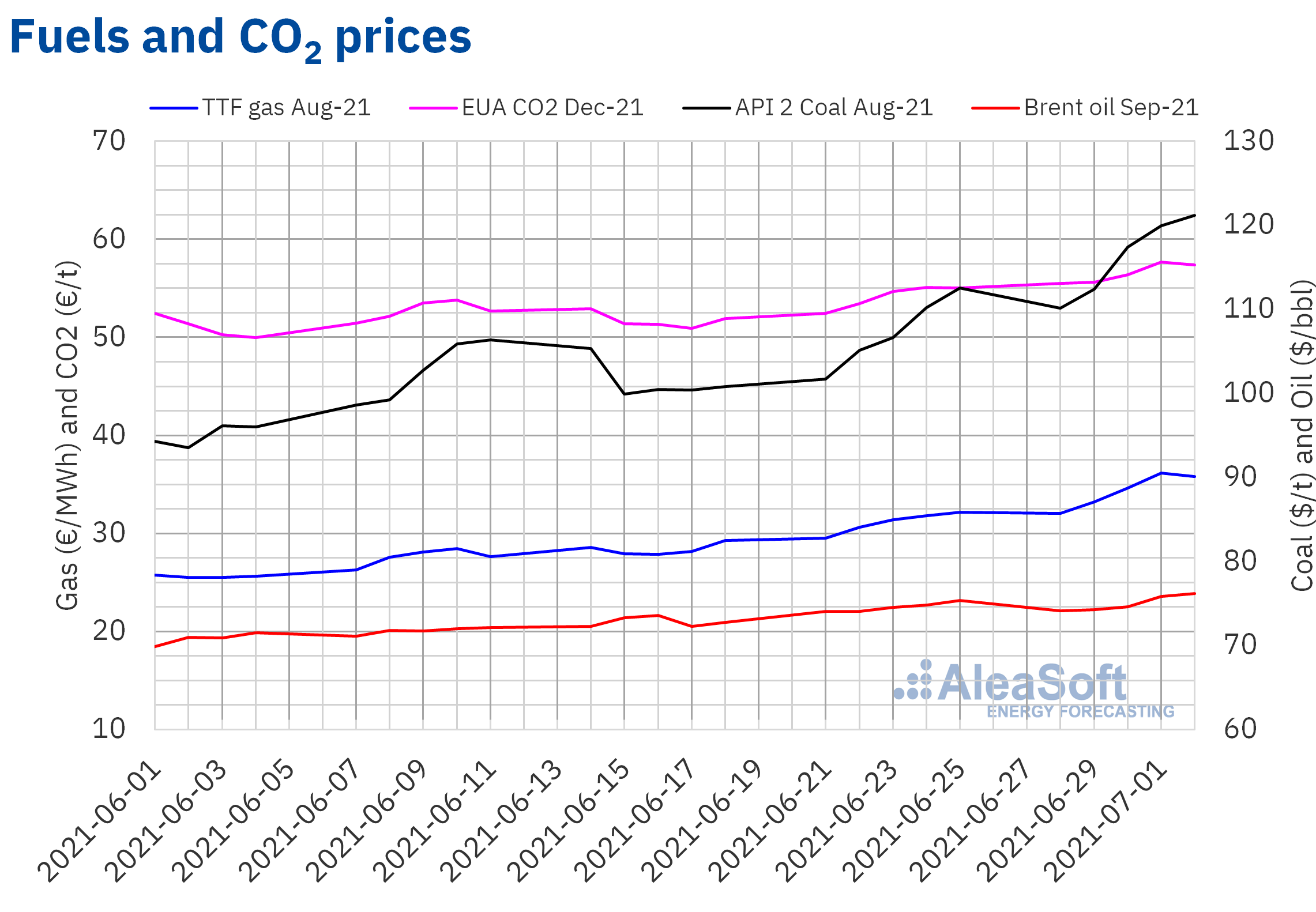 AleaSoft is making a special promotion of the long‑term prices curves forecasting reports of the European markets, taking into account the rise in CO2 and gas prices. One of the characteristics that differentiates these forecasts from those of other providers is that they are hourly for the entire 30‑year horizon. This is very useful to calculate the profitability of investments in new renewable energy technologies and in PPA when defining the best price structure. In addition, the forecasts include the confidence bands corresponding to P15 and P85, obtained using a probabilistic metric. These bands allow quantifying the risk or probability that the price fluctuates above or below a value.

The next AleaSoft’s webinar will be held on July 15. On this occasion, the half‑year balance of the European electricity markets will be carried out. In addition to the markets that are usually analysed in these monthly webinars, others that can generate opportunities for the agents of the sector will also be analysed, such as those of Poland, Greece, Romania, Serbia. Likewise, an analysis of the prospects for the energy markets for the second half of the year will be made and the AleaSoft’s vision of future on the role of green hydrogen in the decarbonisation of industry and transport will be explained.