AleaSoft, November 9, 2020. Most of the European electricity markets ended the first week of November with an increase in prices, despite the fact that during the first days some registered decreases. The electricity demand increased almost generally and the wind energy production fell in most markets, leading to higher prices. The recovery in prices is expected to continue during the second week of the month as the combination of higher demand and less wind energy production is expected to repeat.

In the year‑on‑year analysis, during the first eight days of November, the solar energy production increased in most of the markets analysed at AleaSoft. In the Iberian Peninsula, the solar energy production during this period was 18% higher than in the same days of 2019, despite the fact that in the Portuguese market it remained with little variation. In the German market, the production increased by 71%, while in the French and Italian markets it grew by 55% and 50% respectively.

For the second week of November, the AleaSoft‘s solar energy production forecasting indicates that it will decrease in the German market. On the contrary, an increase in production is expected in the Spanish market and in the Italian market. 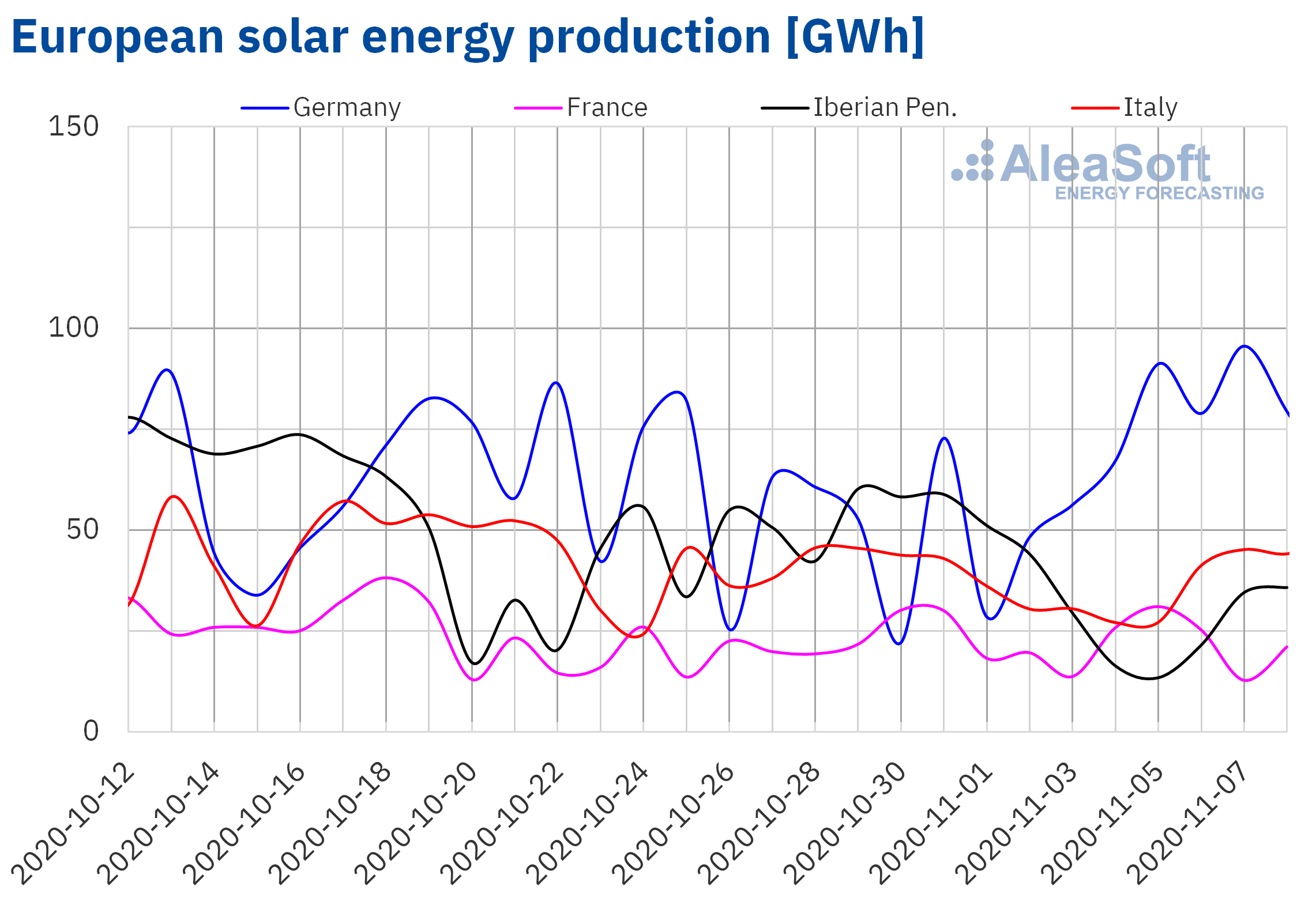 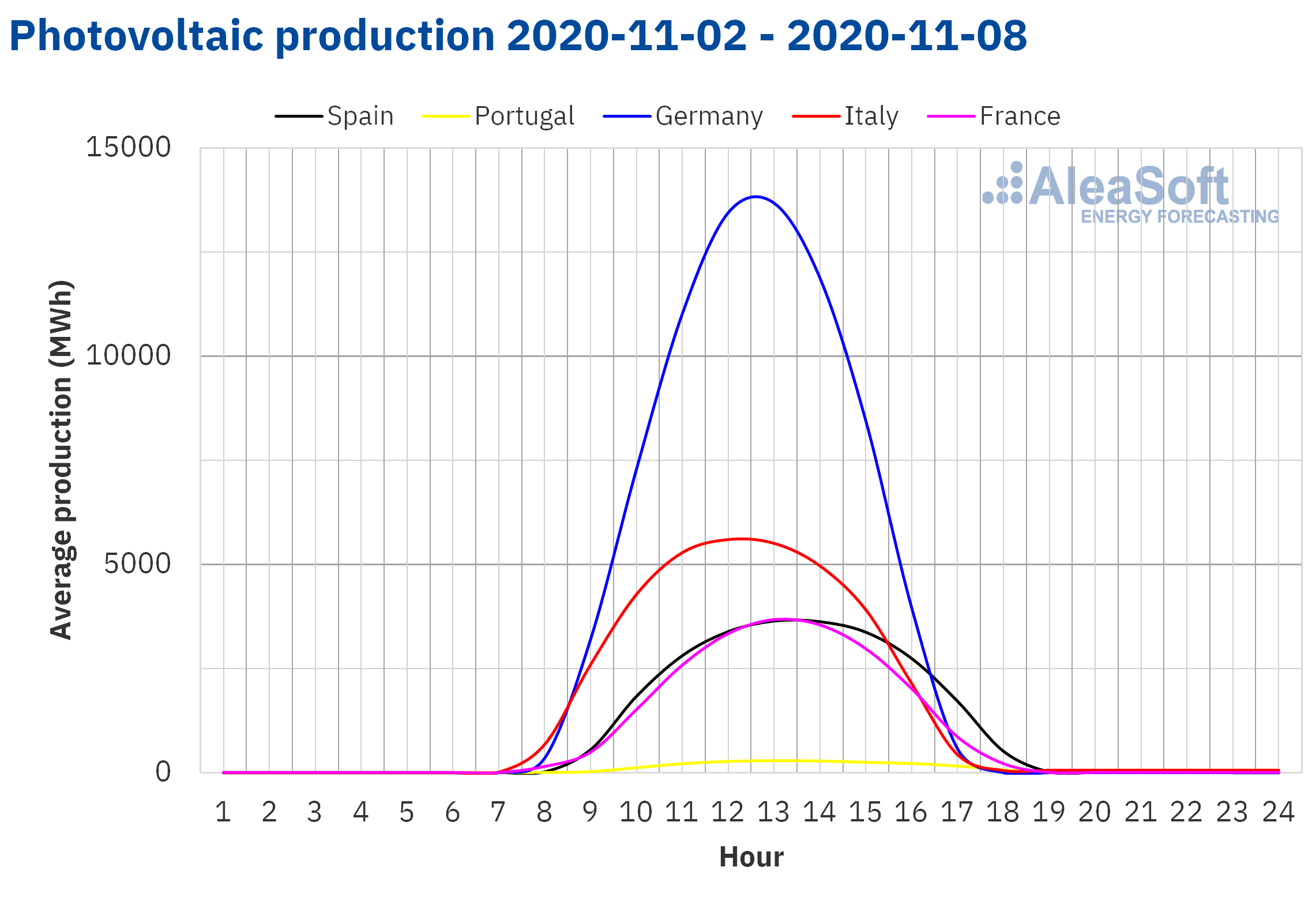 During the first week of November, the wind energy production increased by 63% in the Iberian Peninsula compared to the previous week, with the 164% increase in the Portuguese market standing out. In the rest of the European markets analysed at AleaSoft, the production decreased between 50% of the Italian market and 31% of the French market.

During the period between November 1 and 8, the wind energy production increased by 25% in the German market compared to the same days of 2019, while in the French market it grew only by 2.6%. On the contrary, in the Italian market, the production with this technology was 74% lower and in the Iberian Peninsula it reduced by 30%.

The AleaSoft‘s wind energy production forecasting indicates a reduction in production in all the analysed markets during the second week of November. 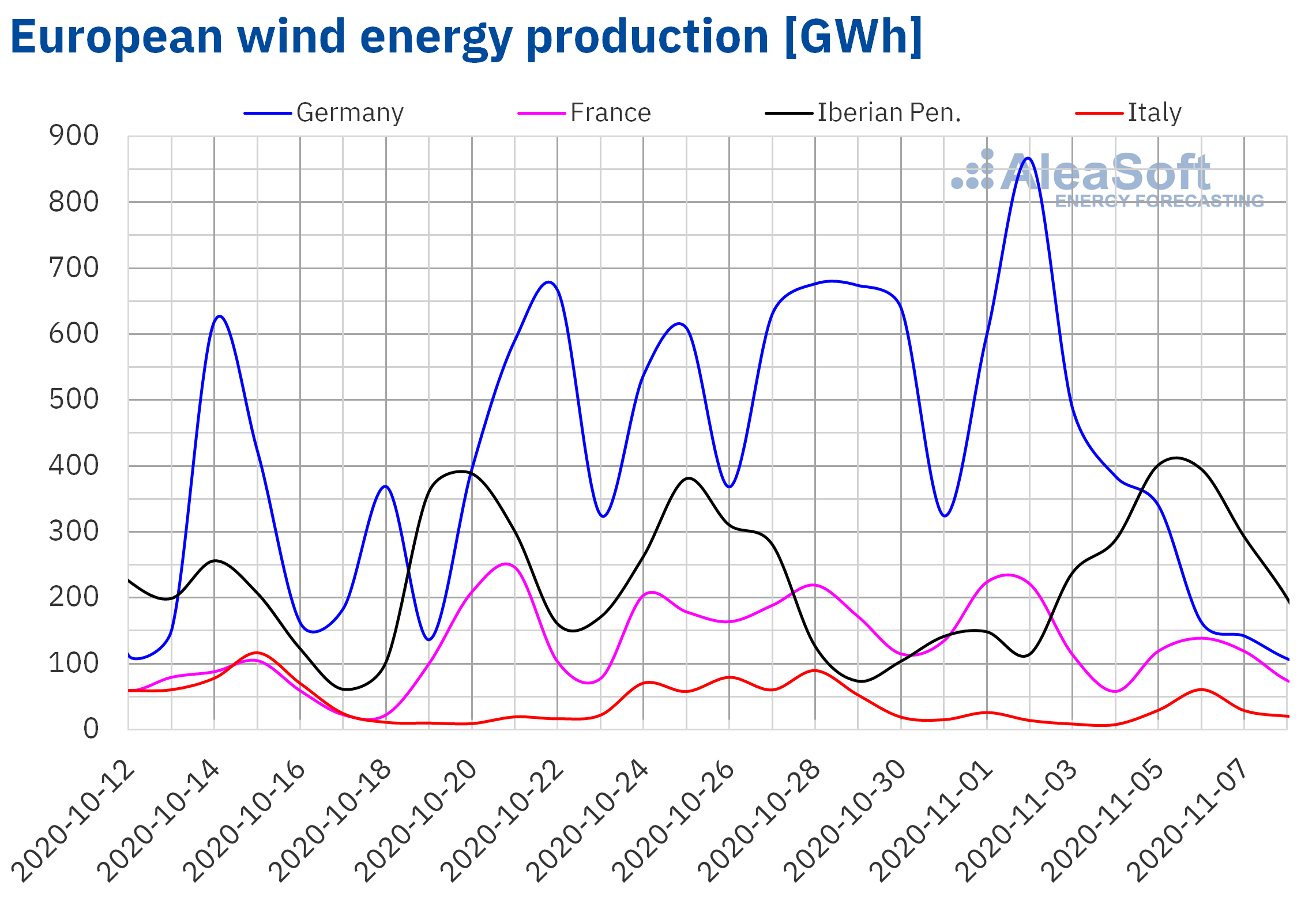 The electricity demand rose uniformly in most of the European electricity markets during the week of November 2 compared to the previous week. The British market registered a notable rise of 7.2%. In the French market there was a rise of 3.4%, where the main daily increases were from Wednesday to Saturday. A little lower was the rise in demand of Portugal, which registered an increase of 2.2%. In the rest of the markets the variations were lower than 1.0%.

The AleaSoft‘s demand forecasting for the week of November 9 indicates that the demand will continue with an upward trend in most of the European markets. However, declines are expected in the French and Belgian markets. It must be borne in mind that the evolution of the demand may be influenced by the restrictions to stop the spread of COVID‑19 that were set by the different European governments. One of these factors is the State of Alarm that began in Spain on October 25, together with the national curfew and the mobility restrictions that the autonomous communities are applying. Germany is currently under a partial lockdown that will end on November 30, while some regions of Belgium have a curfew until mid‑December. In addition, in Portugal a lockdown for 121 municipalities of the country came into effect on November 4 and in the Netherlands the partial lockdown will last until November 25. 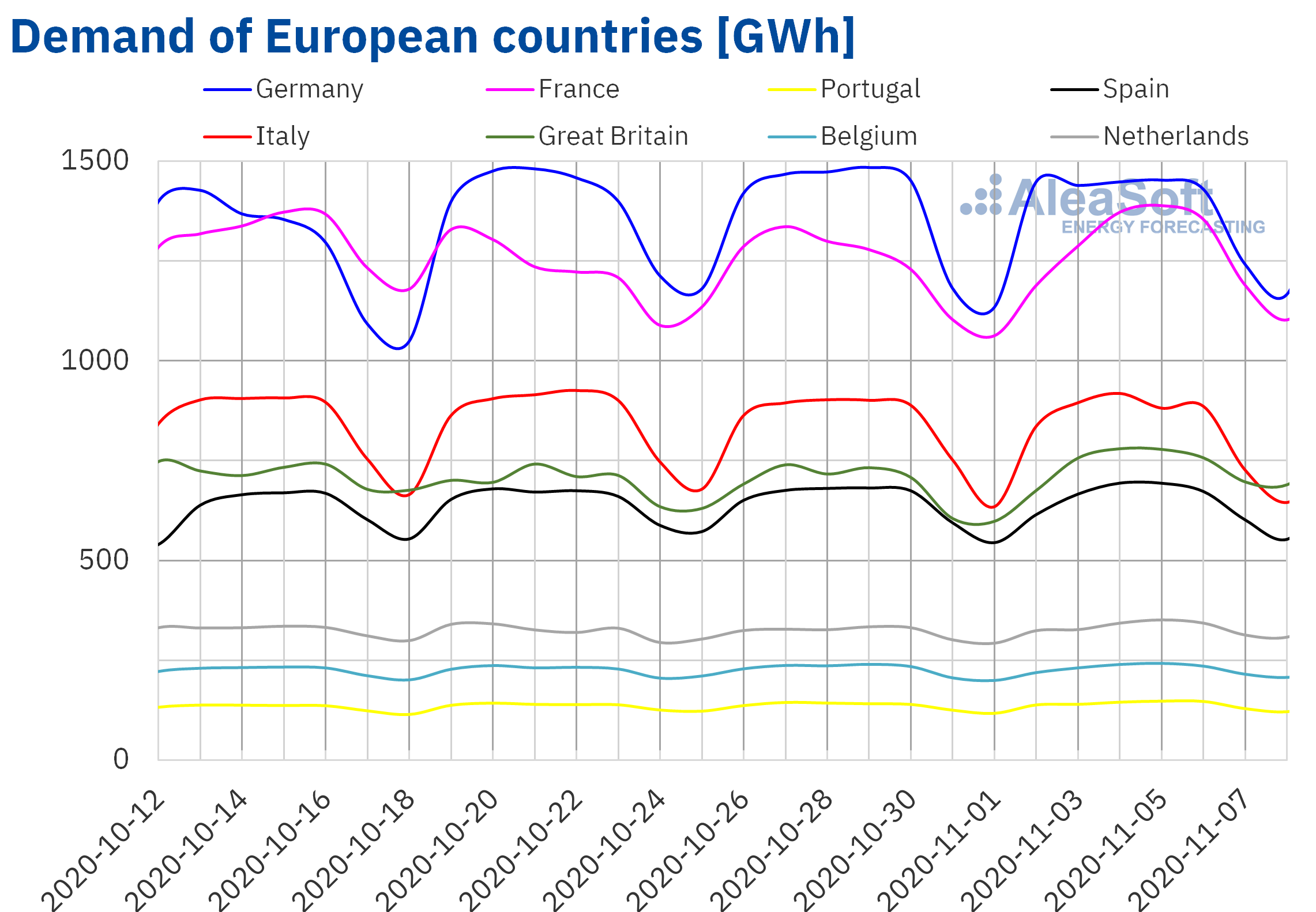 The week of November 2, the weekly average prices were below €40/MWh in almost all the analysed European electricity markets. The exceptions were the Italian market and the British market, with prices of €43.16/MWh and €48.65/MWh respectively. In contrast, the Nord Pool market of the Nordic countries had the lowest average price, of €4.63/MWh. The rest of the markets had averages between €35.89/MWh of the German market and €37.21/MWh of the Netherlands market. 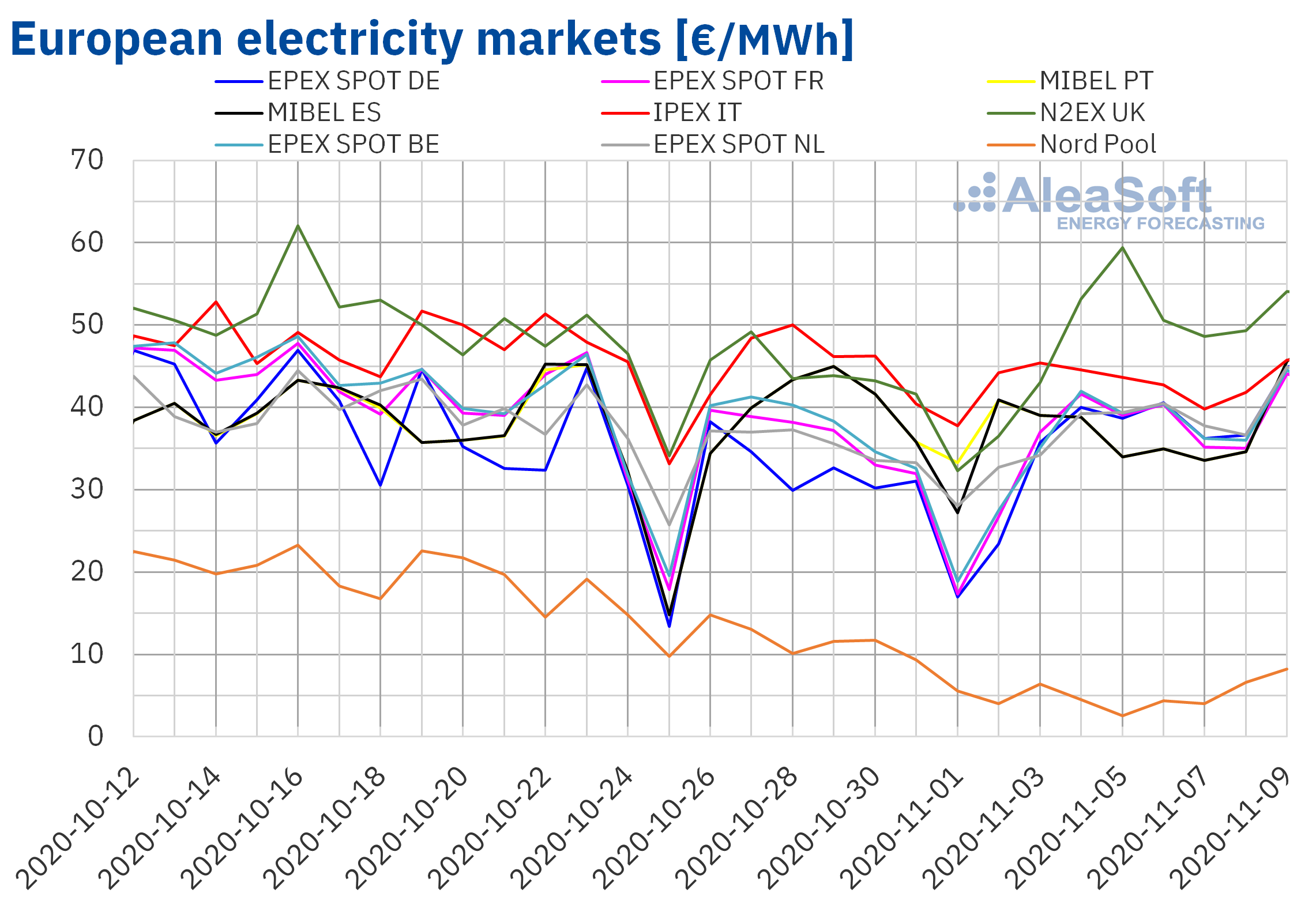 The AleaSoft‘s price forecasting indicates that the week of November 9 there will be a general increase in European electricity markets prices, favoured by a decrease in wind energy production in Europe and by the increase in demand in most countries. 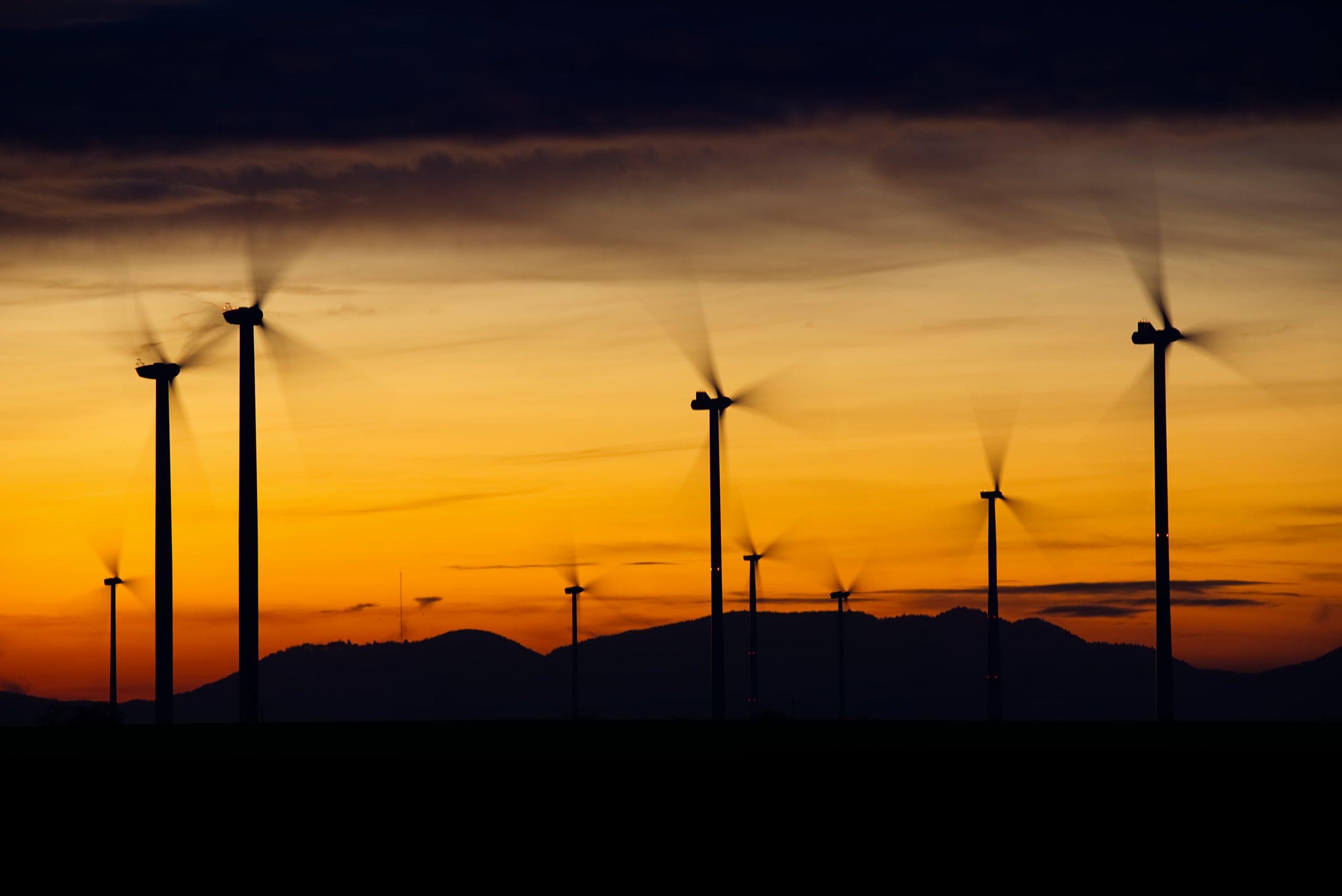 The behaviour of the electricity futures prices for the next quarter was heterogeneous during the first week of November. In the EEX market of Germany, France and Italy and the ICE market of Belgium and the Netherlands, the prices increased compared to the last session of the previous week. The German market was the one with the highest increase, of 6.7%. In the rest of the markets analysed at AleaSoft, the prices reduced for the same period. The NASDAQ market of the Nordic countries was the one with the greatest decline, falling by 7.5% compared to the settlement price of the session of October 30.

As for the futures prices for the year 2021, there was a general decrease in all the markets analysed at AleaSoft where this product is traded. The data in the table shows a rise in the ICE market of Great Britain, but in this case it is an estimate of the prices of the yearly product based on the weighting of the prices of the monthly products. The largest variations occurred in the ICE market and the NASDAQ market of the Nordic countries, both with a 23% decrease in their prices. The market in which the settlement price for this product fell the least was the ICE of the Netherlands, with a decrease of 1.4%.

The Brent oil futures prices for the month of January 2021 in the ICE market increased from November 2 to 4. As a result, on Wednesday, November 4, a settlement price of $41.23/bbl was registered, 4.0% higher than that of the previous Wednesday. However, the prices began to decline on Thursday, and on Friday the settlement price was $39.45/bbl.

The possibility that the OPEC+ will not carry out the production increase scheduled for January and the decline in crude oil reserves in the United States contributed to the recovery of the prices in the first days of the week of November 2. However, the demand is still affected by the measures set to try to control the COVID‑19 pandemic in Europe and the United States, where the number of infected people continues to increase. In addition, with regard to supply, there is concern about the increase in production in Libya and the possibility that the new United States government will lift the sanctions on Iran and Venezuela.

The increase in gas supply from Norway, the higher‑than‑usual temperature forecasts and the high levels of the gas reserves, along with the new restrictions imposed to curb the COVID‑19 pandemic in Europe, favoured lower gas prices at the end of the first week of November.

On the other hand, the API 2 coal futures in the ICE market for the month of December 2020, the first week of November, had settlement prices lower than those of the same days of the previous week. These settlement prices ranged between $51.40/t of Friday and $52.60/t of Thursday. 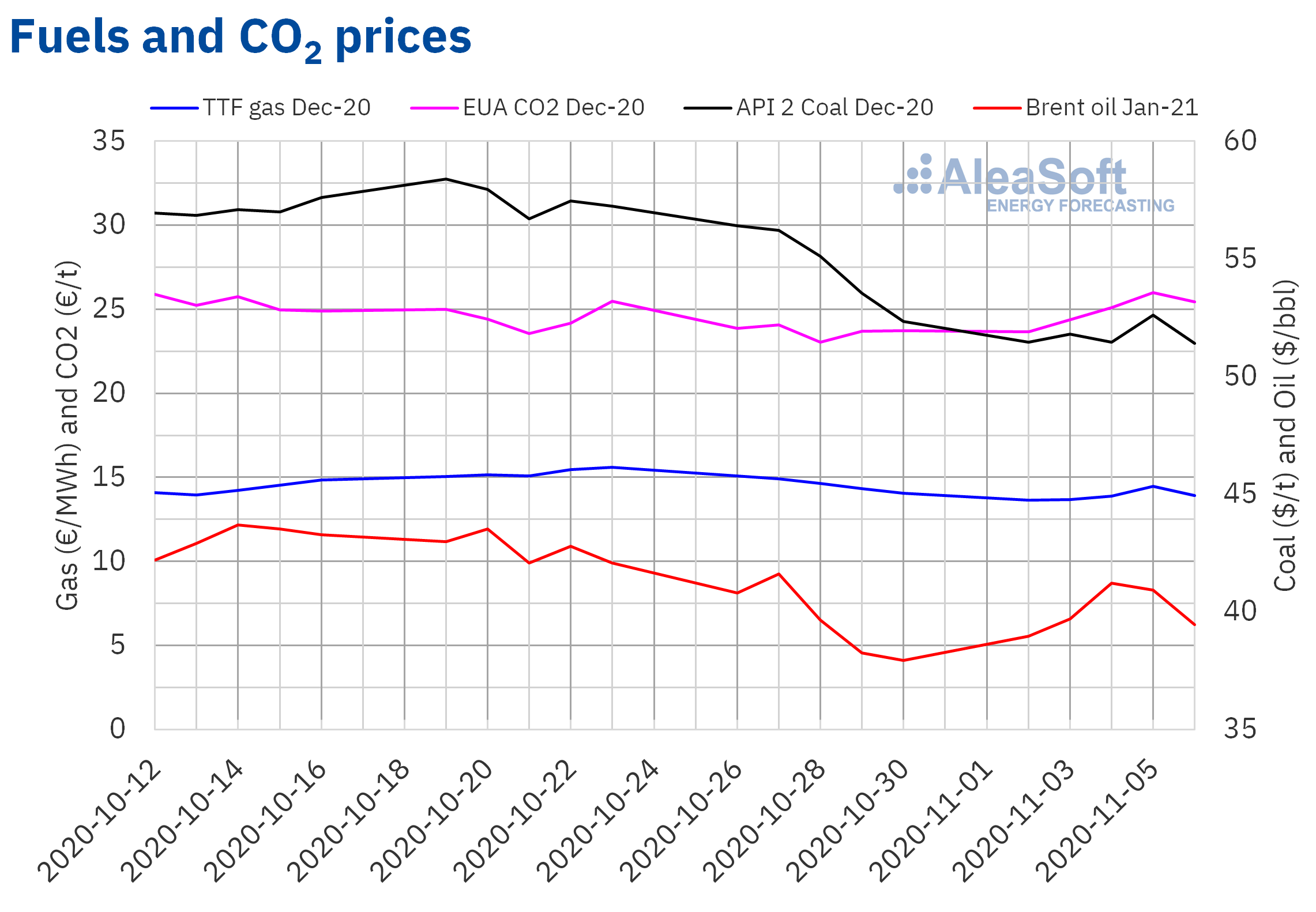 At AleaSoft the webinar “Prospects for the energy markets in Europe from 2021 (I)” is being organised, which will be held on November 26. One of the topics that will be covered in the webinar, which was addressed in the previous webinars that the consultancy carried out since the coronavirus pandemic began, is the evolution of the energy markets. In addition to analysing the behaviour of the markets in recent weeks, the prospects from 2021 will be discussed. Taking into account that the Spanish Government recently approved the design of the new renewable energy auctions, another issue to be addressed is the auctions and their effect on the market. The technical Due Diligence and its importance for the projects financing will also be discussed. On this occasion, the following speakers from Vector Renewables will participate: Javier Asensio Marín, CEO, Hugo Alvarez López, Global Head of Technical Advisory and Carlos Almodóvar Almaraz, Principal M&A and Financial Advisory.

The energy markets observatories, available on the AleaSoft website, allow monitoring the main European electricity, fuels and CO2 markets with daily updated data. The observatories include comparative graphs of the last weeks, with hourly, daily and weekly information.