AleaSoft, May 31, 2021. The European electricity markets prices rose in May reaching values that represent the highest monthly average since at least 2019 in the Iberian, Italian and Dutch markets. The electricity futures prices also rose in a generalised way. These increases occurred as a result of the increase in gas and CO2 prices, which reached historical highs, and despite the fact that the wind and solar energy production increased in almost all markets.

The solar energy production increased in most of the European markets analysed at AleaSoft during the month of May compared to the previous month, a behaviour that is in line with the increase in radiation and hours of sunshine. In the case of May, provisional data for the last day of the month were used. The largest increase in production was registered in the Spanish market and it was 55%. In the Portuguese market, the production increased by 37% while in the Italian market and in the German market the increase was 15% and 3.9% respectively. In the French market the variation was lower than 1.0%.

In the comparison with the month of May 2020, the solar energy production grew by 35% in the Iberian Peninsula and by 5.6% in the Italian market. On the contrary, there was a reduction in production of 5.3% and 3.4% in the markets of Germany and France. 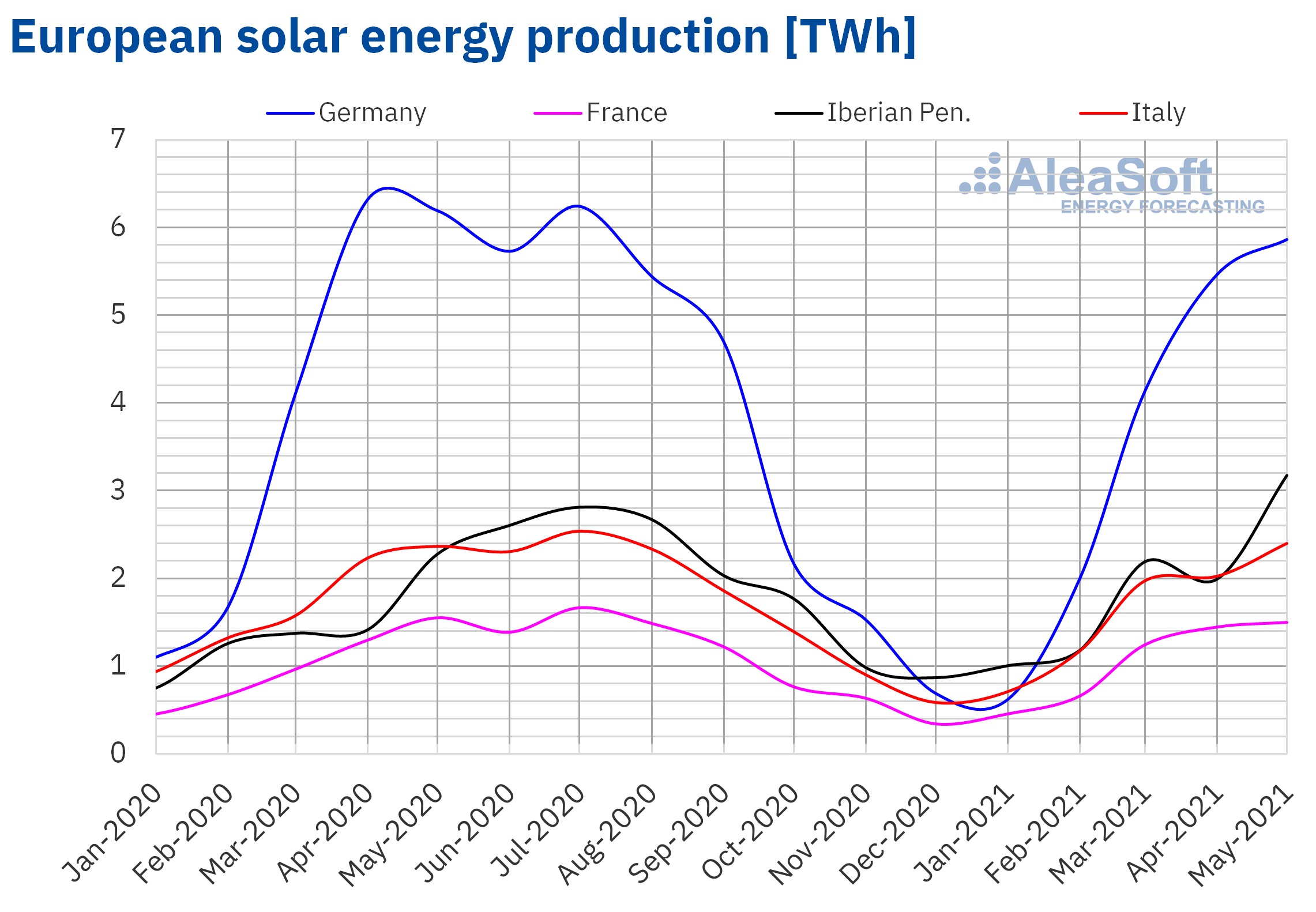 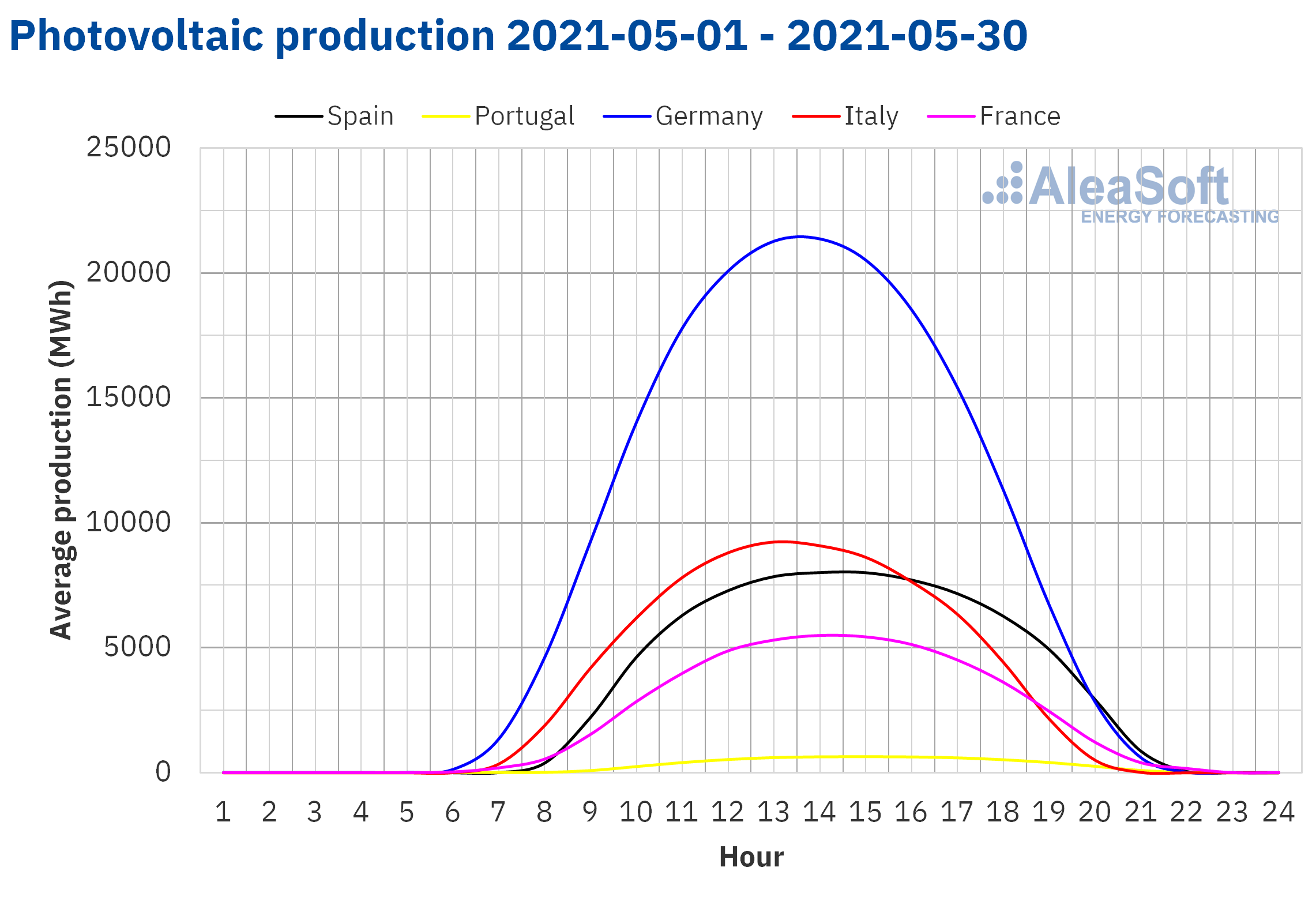 In the case of the wind energy production, during the month of May 2021 it was higher than that of April 2021 in all the markets analysed at AleaSoft. The increase of 64% in the Portuguese market stands out, while in the rest of the markets it was between 2.2% of Germany and 27% of France.

Comparing the production of May 2021 with that of May 2020, the 58% increase in the Portuguese market as well as the 43% increase in the French market also stands out. In the rest of the markets the increases were between 12% of Italy and 31% of Germany. 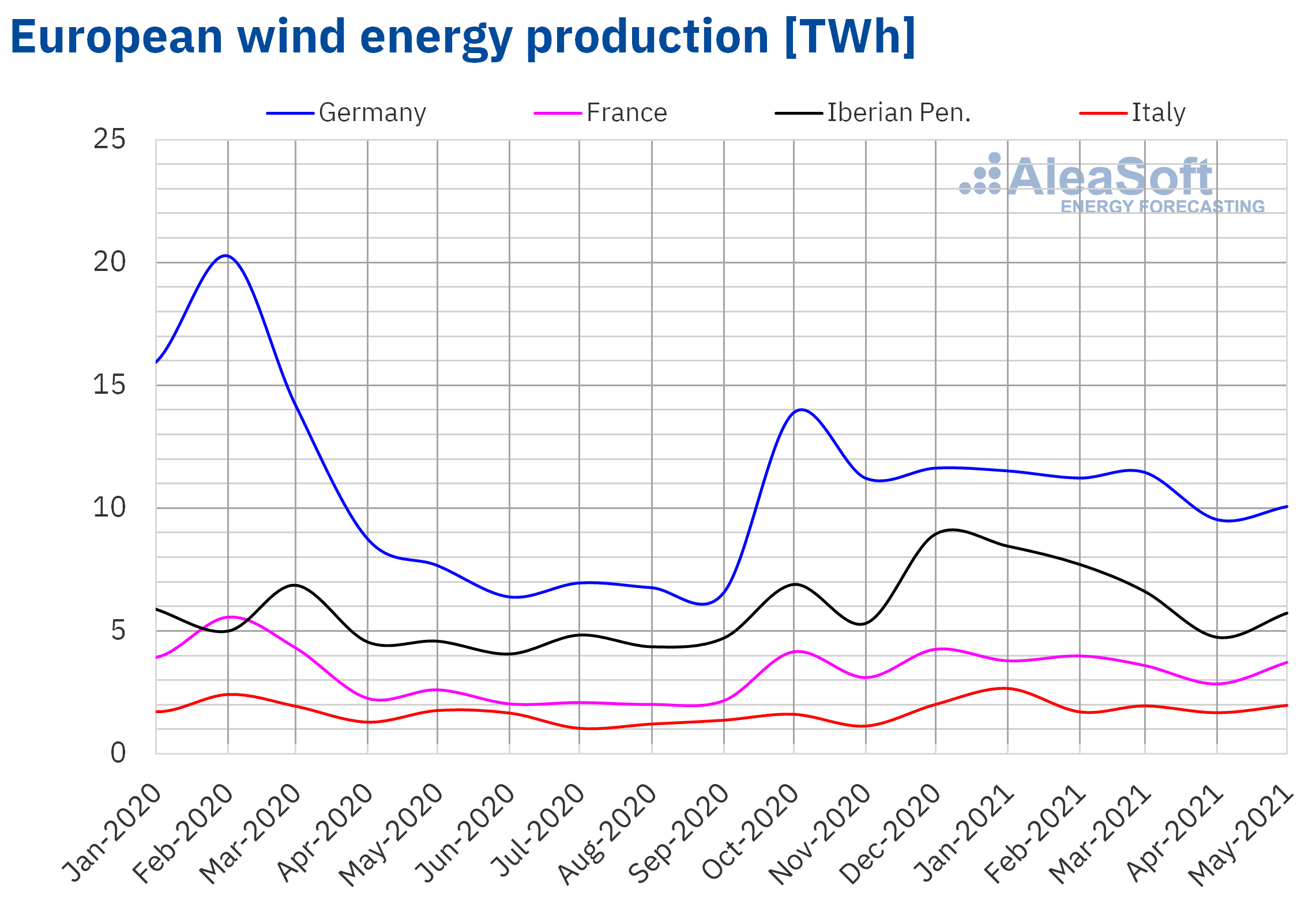 During the month of May, the electricity demand registered high year‑on‑year variations, with increases of up to 22% in the market of Great Britain, taking into account the provisional data for May analysed at AleaSoft. Similar to the behaviour of April, the fundamental cause of this general increase was the decrease in demand during May 2020 as a result of the COVID‑19 pandemic. The average temperatures continued to decrease throughout Europe in May compared to the same month of the previous year, maintaining the decreasing trend of 2021.

Comparing the month of May 2021 with the previous month, the majority of markets in Europe registered falls. The decreases in France and Belgium stand out, which were 11% and 6.0%, according to provisional data. On the other hand, in Portugal there was a slight increase of 1.7%. The temperatures rise as summer approaches, as it is to be expected, and in May there were increases in all regions, with rises above 4.7 °C in Italy and Germany, according to provisional data. 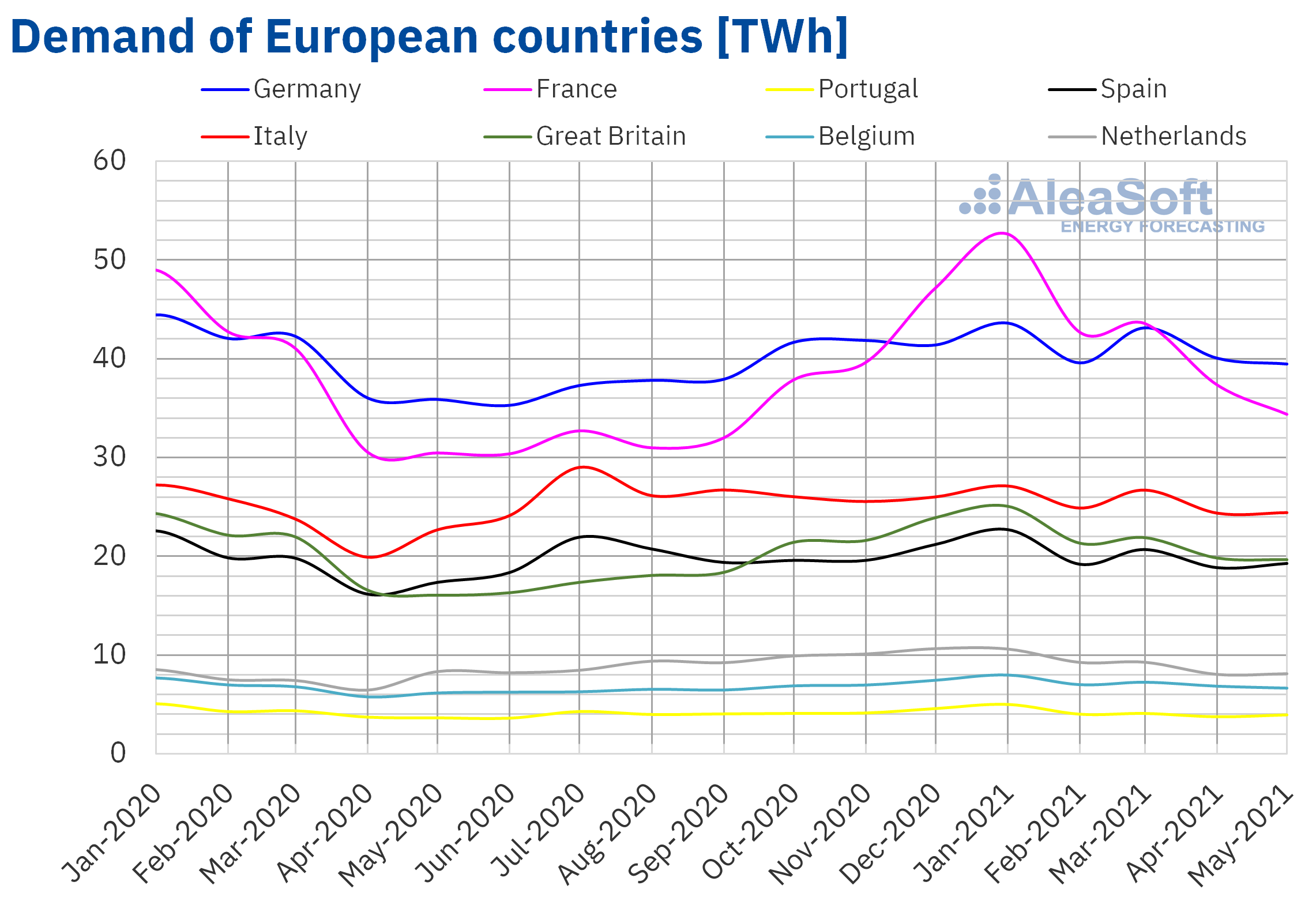 In May 2021, the monthly average price was above €50/MWh in almost all the European electricity markets analysed at AleaSoft. The exception was the Nord Pool market of the Nordic countries, with an average of €44.28/MWh. On the other hand, the highest monthly average price, of €87.40/MWh, was that of the N2EX market of the United Kingdom, followed by that of the IPEX market of Italy, of €69.91/MWh. This value is the highest monthly average registered in the Italian market since October 2018. In the rest of the markets, the averages were between €54.53/MWh of the EPEX SPOT market of Germany and €67.12/MWh of the MIBEL market of Spain and Portugal. In the case of the MIBEL market, this average was the highest since September 2018 and in the Netherlands the average of €56.13/MWh was the highest since January 2019.

Compared to the month of April 2021, in May the average prices rose in most of the European electricity markets analysed at AleaSoft. The exceptions were the markets of France and Belgium, with decreases of 12% and 2.4% respectively. On the other hand, the largest price increases, of 17% and 12%, were registered in the Nord Pool and N2EX markets respectively. The rest of the markets had price increases between 0.2% of the German market and 4.3% of the market of the Netherlands.

If the average prices for the month of May are compared to those registered in the same month of 2020, there were significant price increases in all markets. The largest price increase was that of the Nord Pool market, of 431%. In the rest of the markets, the price increases were between 191% of the German market and 261% of the Belgian market. 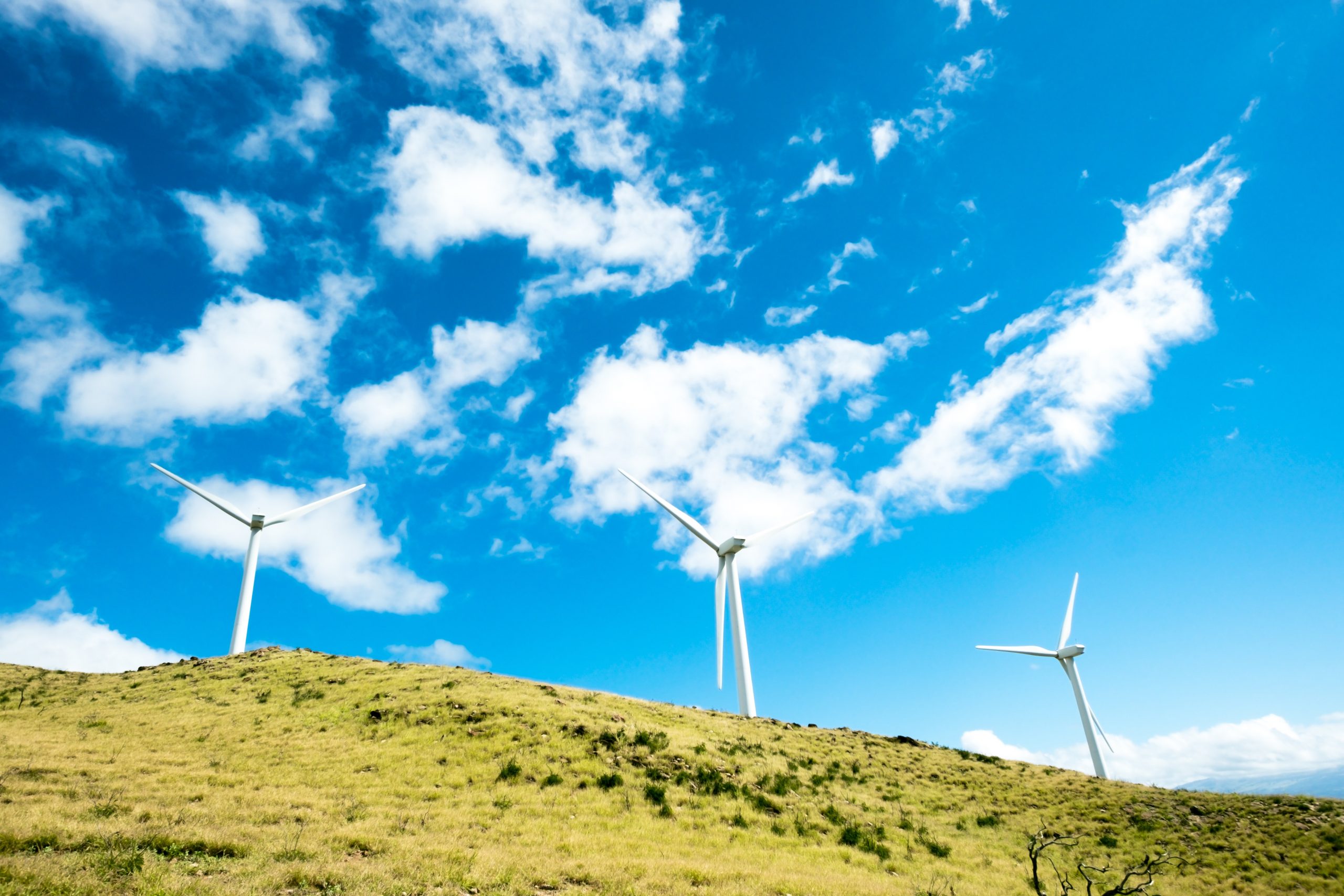 On the other hand, negative hourly prices were reached in various European electricity markets in May. The markets of Belgium, France and the Netherlands reached their lowest hourly prices, of ‑€66.18/MWh, on May 9, which were the lowest in these markets since April 2020. In the case of the German market, the minimum hourly price, of ‑€69.00/MWh, was reached on May 22 and it was the lowest price since May 2020 in this market.

In May, despite the general increase in wind energy production in Europe and in solar energy production in the Iberian Peninsula and Italy, the upward trend in gas and CO2 prices favoured the price increases in the European electricity markets with respect to both the previous month and May 2020. When comparing with the month of May 2020, the recovery of the demand in Europe also exerted its upward influence on the electricity prices. 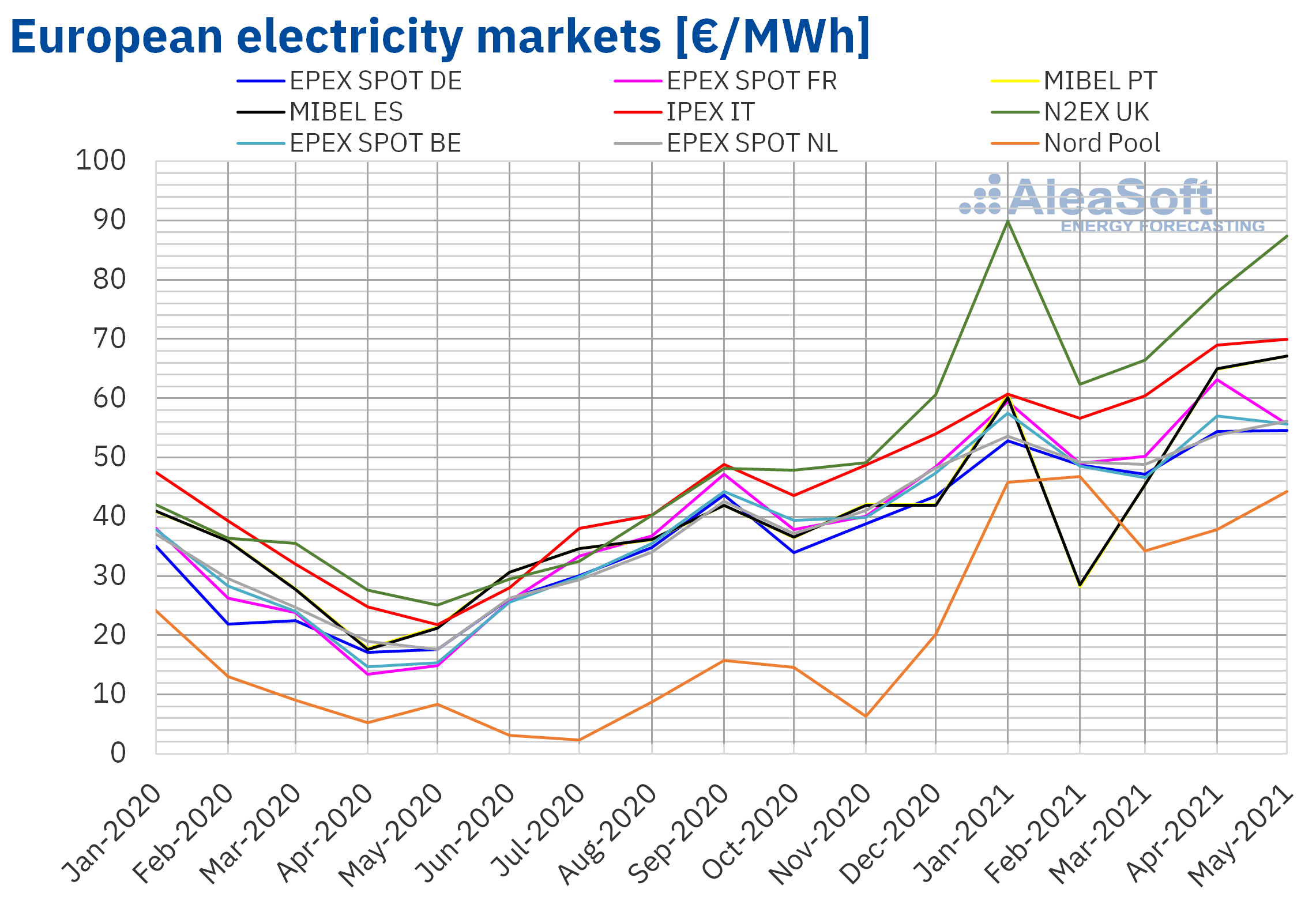 The electricity futures prices for the next quarter registered a general upward behaviour in all the European markets analysed at AleaSoft, if the settlement prices of the sessions of May 28 and May 3 are compared. The highest percentage increase was reached in the ICE market of the Nordic region, which was 26%, while the futures of the same region in the NASDAQ market rose by 21%. In the rest of the markets, the price increase was between 3.4% of the EEX market of Italy and 11% of the OMIP and EEX markets of Spain and Portugal.

The settlement prices of the Brent oil futures for July 2021 in the ICE market remained above $65/bbl in May. The monthly minimum settlement price, of $65.11/bbl, was registered on May 20. In the third week of May, the prices fell influenced by the increase in US reserves. The fear of oversupply favoured by the progress in negotiations on Iranian nuclear policy, which could end in a lifting of sanctions on the country’s oil exports, also exerted its downward influence on the evolution of the prices. However, during the last days of the month, the prices recovered and the maximum monthly settlement price, of $69.63/bbl, was reached at the end of the month, on Friday, May 28. This price was the highest in the last two years.

In the coming days, the result of the next OPEC+ meeting of Tuesday, June 1, in which its production strategy will be reviewed, is expected to influence the evolution of the prices.

As for the TTF gas futures in the ICE market for the month of June 2021, they reached their monthly maximum settlement price, of €26.83/MWh, on Friday, May 14. This price was the highest in the last two years. However, on the 19th the prices fell until registering the monthly minimum settlement price, of €22.66/MWh. Subsequently, the prices increased again and the last days of the month prices higher than €25/MWh were registered.

Russia’s announcement to halt gas supply to Europe via Ukraine is one of the causes of the gas price increases. Also during the first half of the month, the high gas demand in Asia and below‑normal temperatures contributed to the price increases. In addition, the low levels of the reserves and the decrease in the flow of gas from Norway due to maintenance operations, as well as the evolution of the CO2 prices also influenced the evolution of the prices in the month of May.

In June, the situation of low levels of the reserves and the maintenance operations that will keep being carried out will continue to favour the price increases.

As for the CO2 emission rights futures in the EEX market for the reference contract of December 2021, on May 4 they registered the monthly minimum settlement price, of €48.61/t. The prices increased during the first half of May, reaching on Friday the 14th the monthly maximum settlement price, of €56.65/t, a value that is also the historical maximum for this product so far. But in the second half of the month, the prices fell. The evolution of the prices was influenced by the first auction of British emission rights carried out in the second half of May. 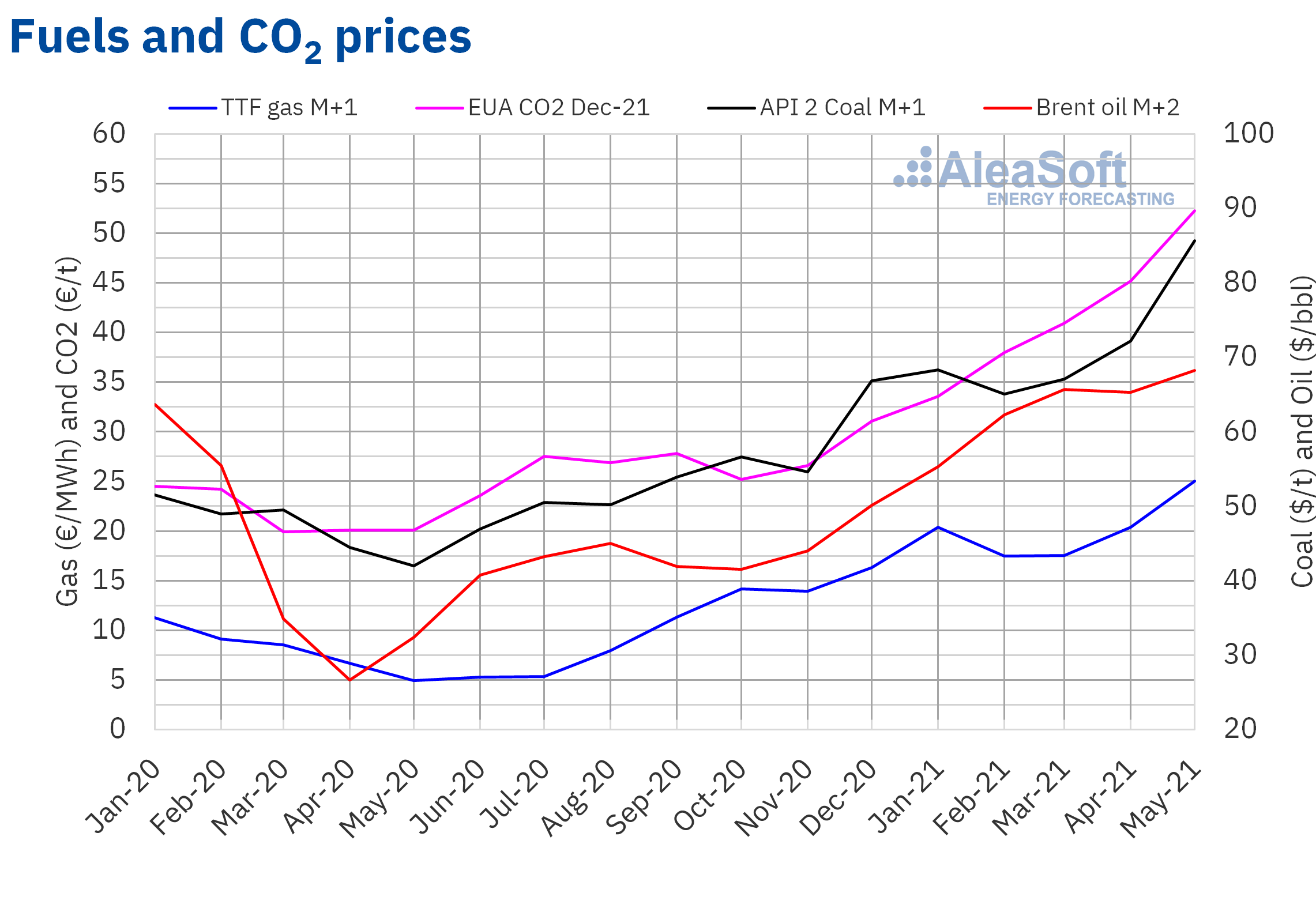 The PPA and their importance for the large consumers

On June 10, the webinar “Prospects for energy markets in Europe. PPA and their importance for large consumers. Vision of the future” will be held at AleaSoft. One of the topics that will be analysed on this occasion is the importance of the PPA for the large and electro‑intensive consumers as part of an energy purchase strategy based on the diversification, which allows them to mitigate the market prices risk, especially in periods of high prices such as those of the last few months, and how the State’s endorsement in the PPA of electro‑intensive consumers may represent an opportunity for the renewable energies. In addition, the AleaSoft‘s vision of the future on the decarbonisation of the industry and the role that the green hydrogen will play will be discussed and the usual analysis of the evolution of the European energy markets will be carried out. During the analysis table there will be the participation of Fernando Soto, Director‑General of Asociación de Empresas con Gran Consumo de Energía (AEGE) who will accompany the three AleaSoft’s speakers: Oriol Saltó i Bauzà, Manager of Data Analysis and Modelling, Antonio Delgado Rigal, CEO, and Alejandro Delgado, CTO.

This webinar is the second part of the one held on May 13, in which, in addition to the usual topics of these monthly meetings, the importance of the energy markets prices forecasts in the development of the renewable energies was analysed and the vision of the future on the decarbonisation of the transport sector was explained.