AleaSoft, January 25, 2021. The European electricity markets prices fell in a generalised way in the third week of the year, favoured by the recovery of the temperatures and the increase in wind energy production. However, the electricity futures increased. The gas and CO2 futures fell from their maximum values but they remain high. It is expected that in the fourth week of the year the wind energy production will decrease and the demand will increase, causing the recovery of the markets prices.

During the week of Monday, January 18, the solar energy production decreased by about 50% in the Portuguese market and 39% in the Spanish market compared to the previous week. In the Italian market the decrease was close to 25%. On the contrary, in the German market, the production with this technology increased by 54% and in the French market by 2.9%.

For the fourth week of January, the AleaSoft‘s solar energy production forecasting indicates that there will be a decrease in the markets of Spain and Germany compared to the previous week. On the contrary, the production is expected to increase in the Italian market. 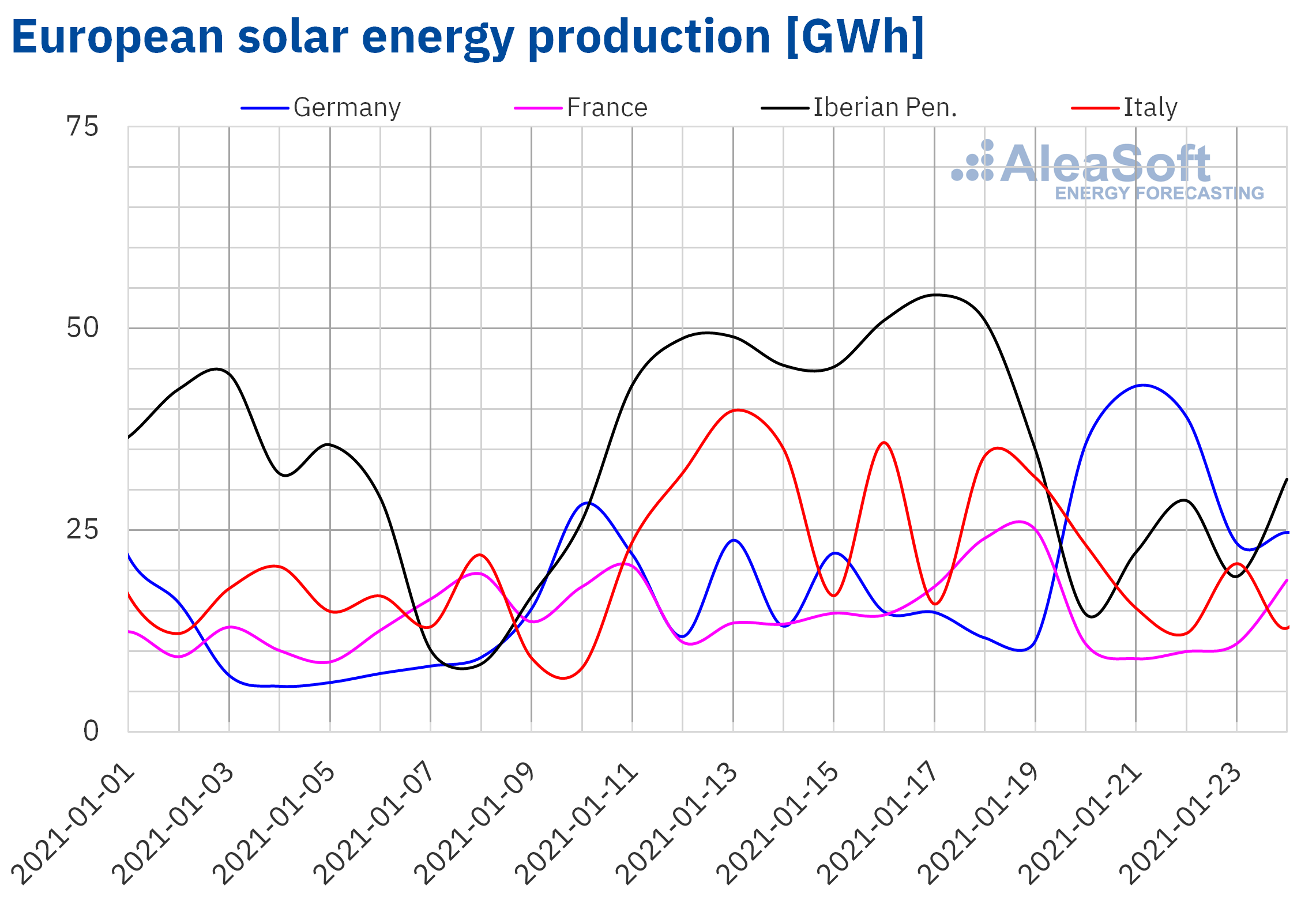 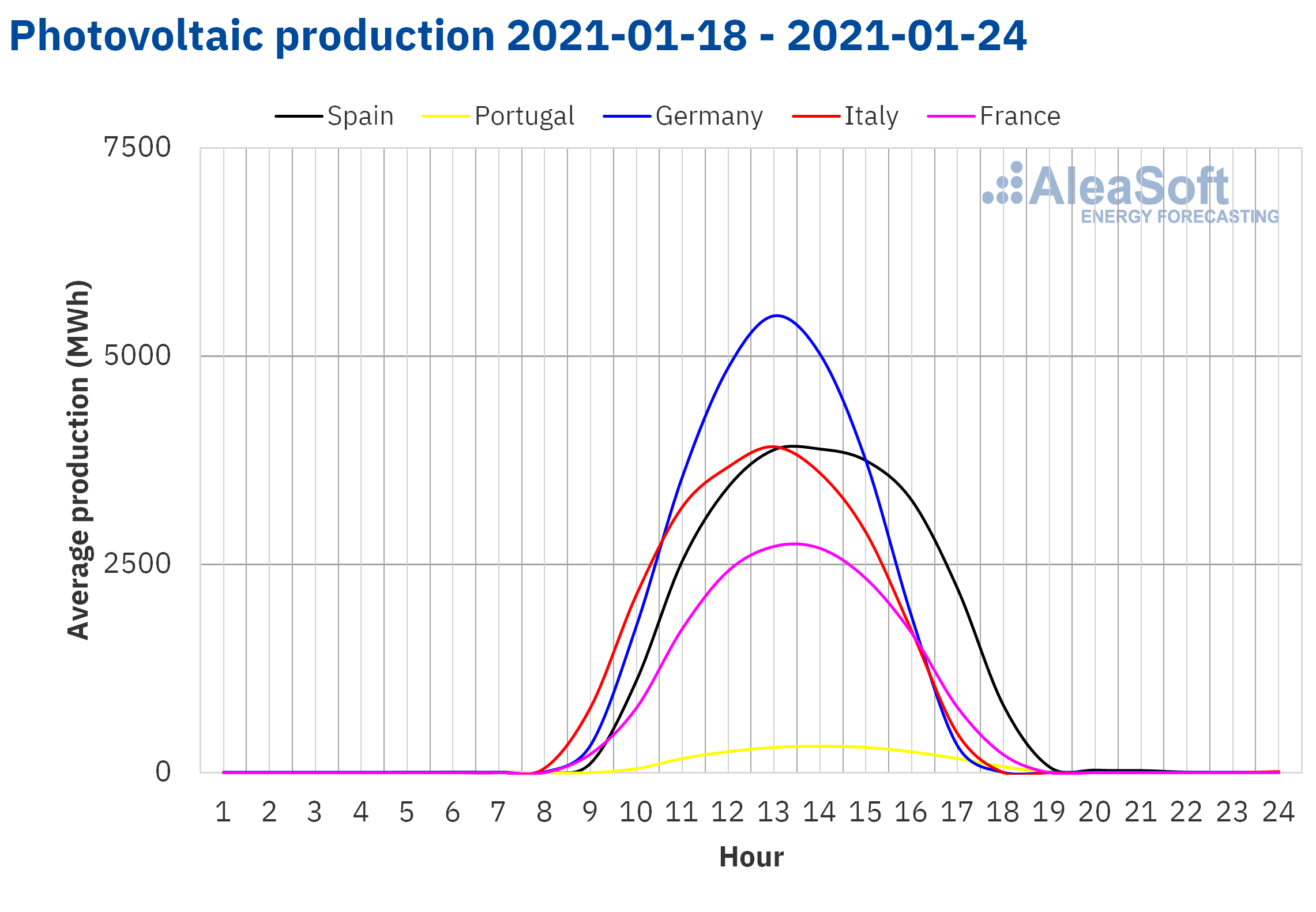 During the third week of 2021, the wind energy production increased in all the European markets analysed at AleaSoft compared to the previous week. In the Portuguese market, the production tripled, with a growth of 233% and in the Spanish market it grew by 58%. In the rest of the markets, the production grew between 28% and 46%.

For the fourth week of January, the AleaSoft‘s wind energy production forecasting indicates that it will decrease in all the markets analysed at AleaSoft compared to the previous week. 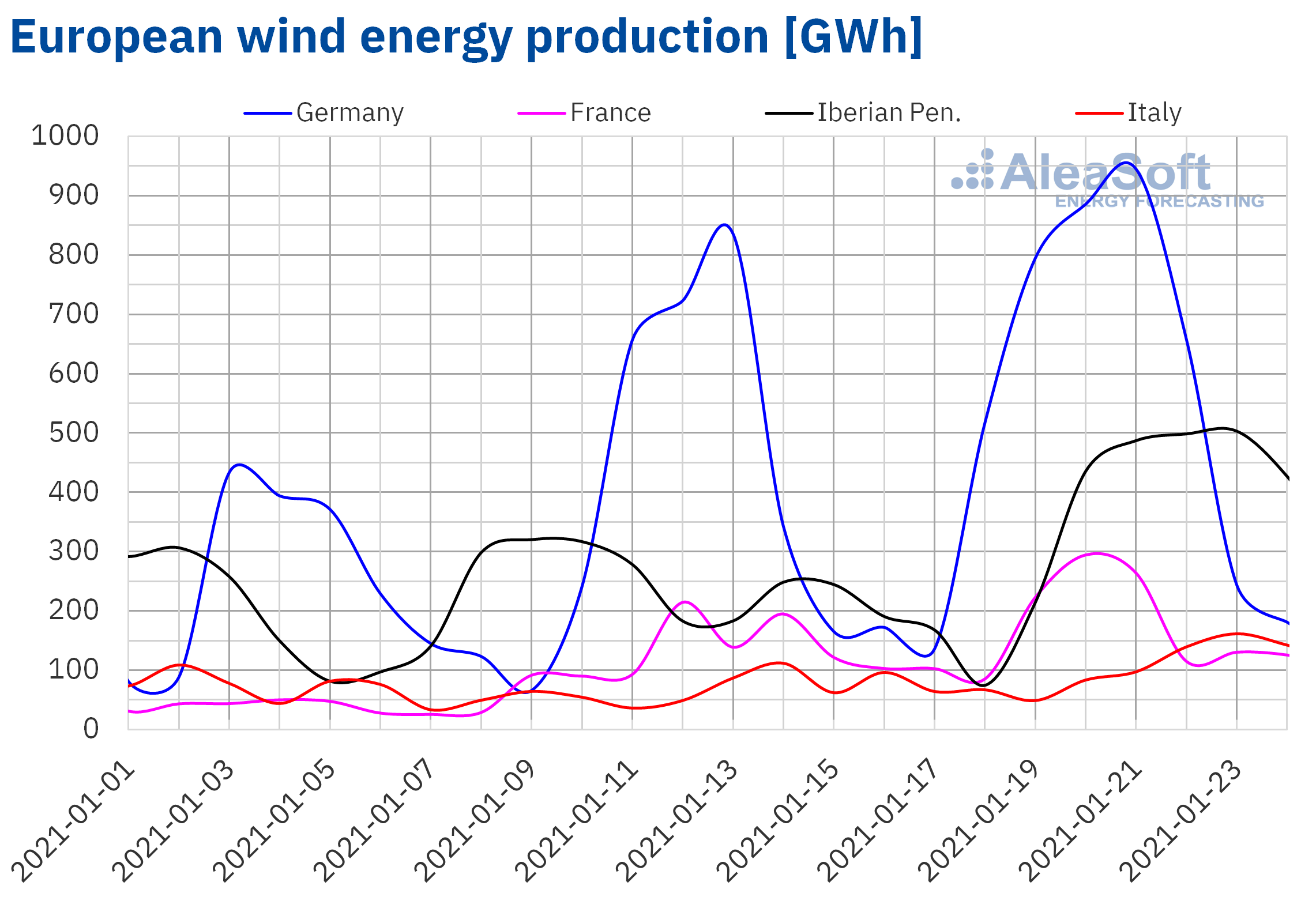 The electricity demand decreased during the week of January 18 compared to the previous week in most of the European markets, due to the increase in average temperatures between 2.1 °C and 4.3 °C. The most notable drops occurred in the markets of Portugal, France and Spain, which were 7.1%, 5.3% and 5.2% respectively. However, the Italian market had little variation from week to week, with an increase of 0.1%.

For the week of January 25, the AleaSoft‘s demand forecasting indicates that demand will recover with slight increases in most markets. On the other hand, the demand of Spain is expected to decline during the week. 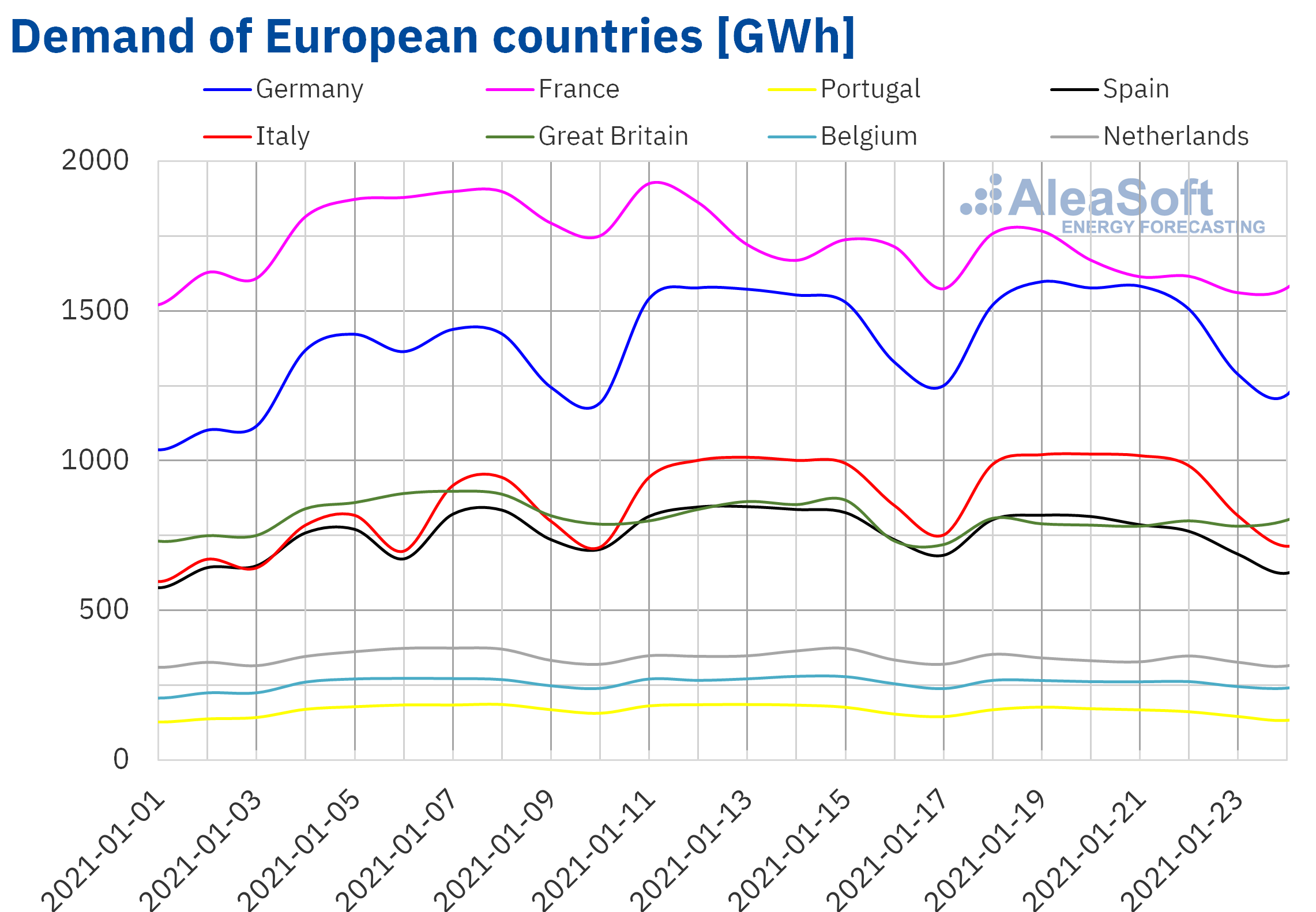 The week of January 18, the prices of all the European electricity markets analysed at AleaSoft decreased compared to those of the previous week. The greatest drop in prices, of 46%, was that of the UK N2EX market, followed by that of the MIBEL market of Spain and Portugal, of 37%. On the other hand, the lowest price decrease was that of the IPEX market of Italy, of 10%. In the rest of the markets, the price drops were between 16% of the EPEX SPOT market of the Netherlands and 23% of the EPEX SPOT market of Belgium.

In the third week of January, the highest weekly average prices were those of the United Kingdom and Italy, of €71.11/MWh and €60.80/MWh, respectively. While the Nord Pool market of the Nordic countries had the lowest average, of €39.45/MWh. In the rest of the markets, the prices were between €44.38/MWh of the German market and €53.03/MWh of the French market.

Regarding the hourly prices, the MIBEL market of Spain and Portugal reached the minimum hourly price so far this year, of €1.95/MWh, at the hours 4 and 5 of Sunday, January 24. In addition, on January 23 and 24, the MIBEL market presented the lowest daily prices in all the analysed markets. The lowest daily price, of €27.50/MWh, was that of Saturday, January 23, which was the lowest in this market since the last week of 2020. 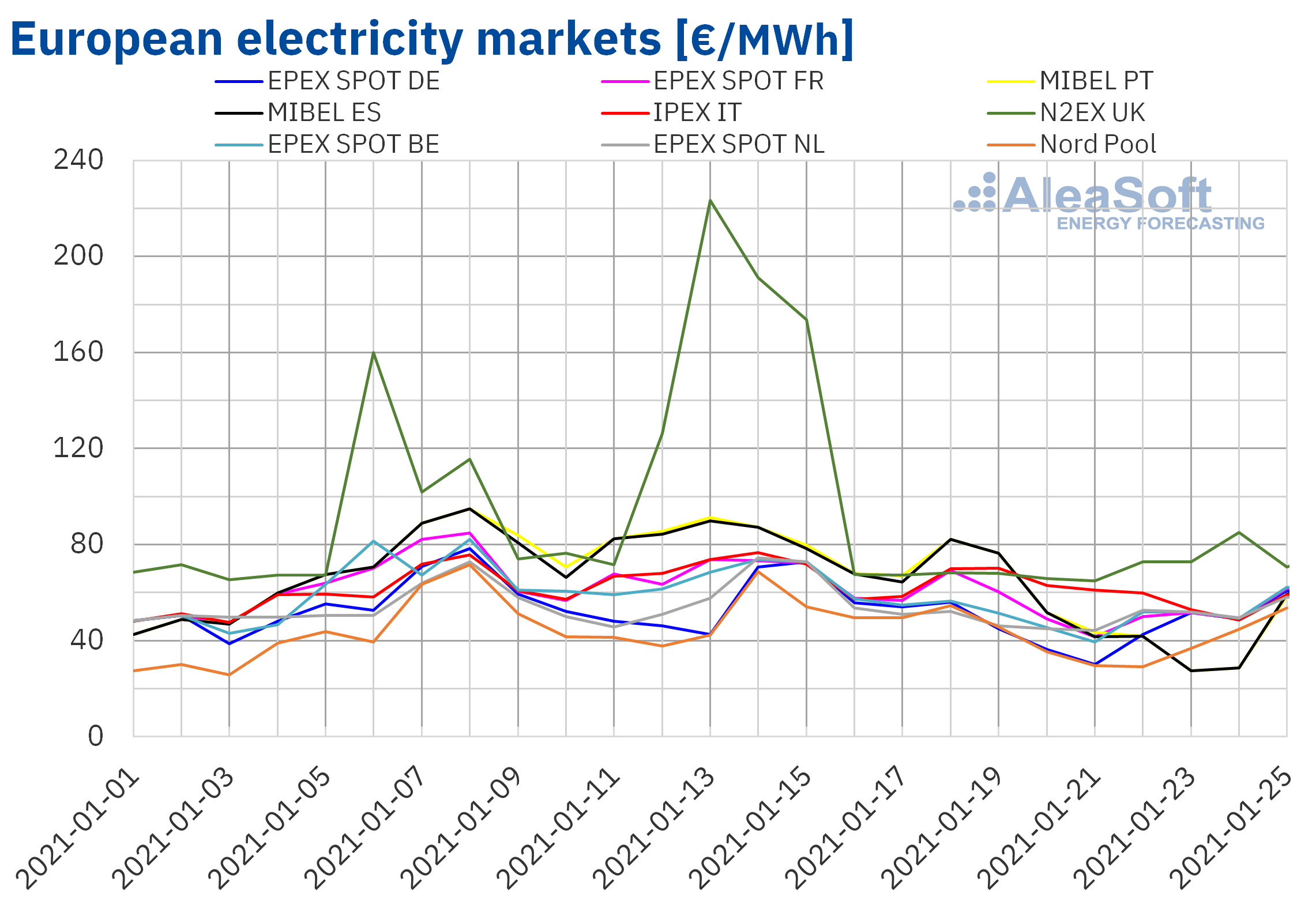 The AleaSoft‘s price forecasting indicates that the week of January 25 the prices will recover in most markets, influenced by the general decline in wind energy production and the increase in demand in most markets. 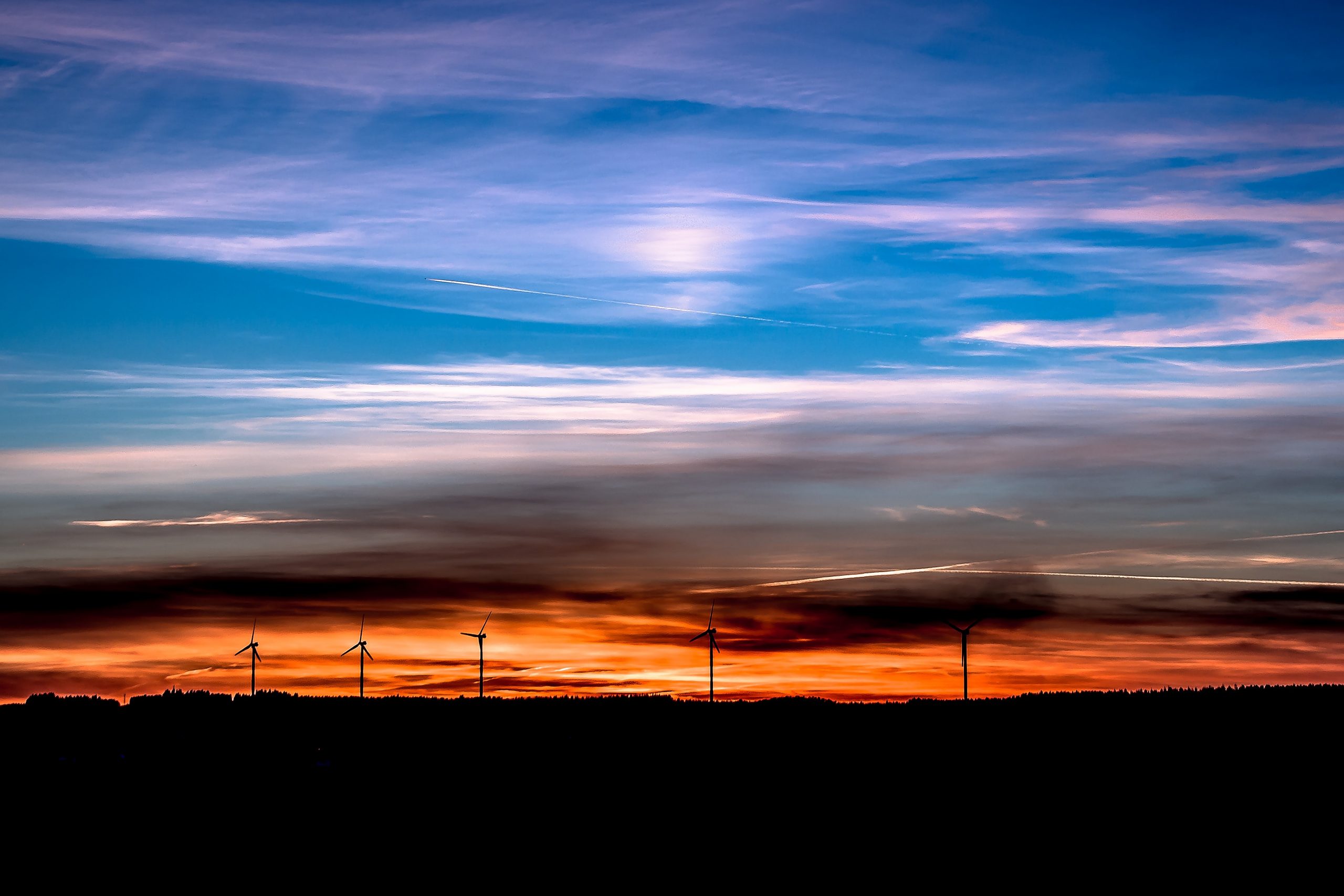 During the third week of 2021, the European electricity futures prices for the next quarter rose in all the markets analysed at AleaSoft. As usual, the percentage increase was more pronounced in the ICE and NASDAQ markets of the Nordic countries, due to their lower prices compared to the rest of the markets. In these Nordic markets the difference between the last sessions of the second and third weeks of the year was 13%. The OMIP market of Spain and Portugal was the one where the prices changed the least, with an increase of 1.3% for both countries. The EEX market of Spain registered a rise of 1.7%. Meanwhile, the rest of the markets registered increases of between 3.7% and 5.3%.

Regarding the product of the year 2022, the behaviour was very similar. The prices also rose during this period in all markets. However, on this occasion the increase in the Nordic countries was, in absolute terms, considerably lower than in the other countries. Even with the lower market prices, its percentage increase was 1.7% in the ICE market and 1.8% in the NASDAQ market, thus being the lowest variations for this product during the week of January 18. The ICE market of Belgium was the one with the highest price increase, with 5.2% more than the previous week. In the rest of the markets the increases were between 2.4% and 4.8%.

The Brent oil futures for the month of March 2021 in the ICE market began the third week of January with decreases. On Monday, January 18, the settlement price was $54.75/bbl, 1.6% lower than that of the previous Monday. But on Tuesday, the prices began an upward trend. As a result, on Thursday, January 21, a settlement price of $56.10/bbl was reached. On Friday, the price fell again to $55.41/bbl, although it continued to be 0.6% higher than that of the previous Friday. Precisely on Friday, the EIA published the data on the crude oil reserves of the United States, which increased in the week of January 15. Also on that day it was public that Iran increased the volume of its crude exports.

In general, during the third week of January, the expectations that the new United States government will develop policies that will allow improving the economic situation and increasing the demand in the country exerted their upward influence on the prices. However, the concern about the evolution of the COVID‑19 pandemic and the increase in mobility restrictions to try to control the increase in cases continues due to the effects they may have on the demand.

As for the TTF gas futures in the ICE market for the month of February 2021, on Monday, January 18, the prices continued with the downward trend of the second half of the previous week. This day a settlement price of €19.03/MWh was reached, 14% lower than that of the previous Monday. However, on Tuesday the prices began to recover, registering an increase of 6.8% compared to the previous day. On Friday, January 22, the prices also increased, by 7.1%, ending the week with a settlement price of €21.48/MWh, which was 6.4% higher than that of the previous Friday. The forecasts of temperature decreases in part of Europe, together with below‑average gas reserve levels, allowed this recovery in prices.

Regarding the settlement prices of the CO2 emission rights futures in the EEX market for the reference contract of December 2021, the third week of January, they continued above €30/t. But on Monday, January 18, the lowest settlement price since the penultimate week of 2020 was registered, of €31.62/t, which was 8.4% lower than that of the previous Monday. Later, the prices increased again and on Friday, January 22, the settlement price was €34.24/t, 7.9% higher than that of the same day of the previous week. Until now, the evolution of the gas prices had a great influence on the CO2 emission rights prices. But, at the end of the last week of January, the auctions will resume in Germany, which will also influence the evolution of the prices. 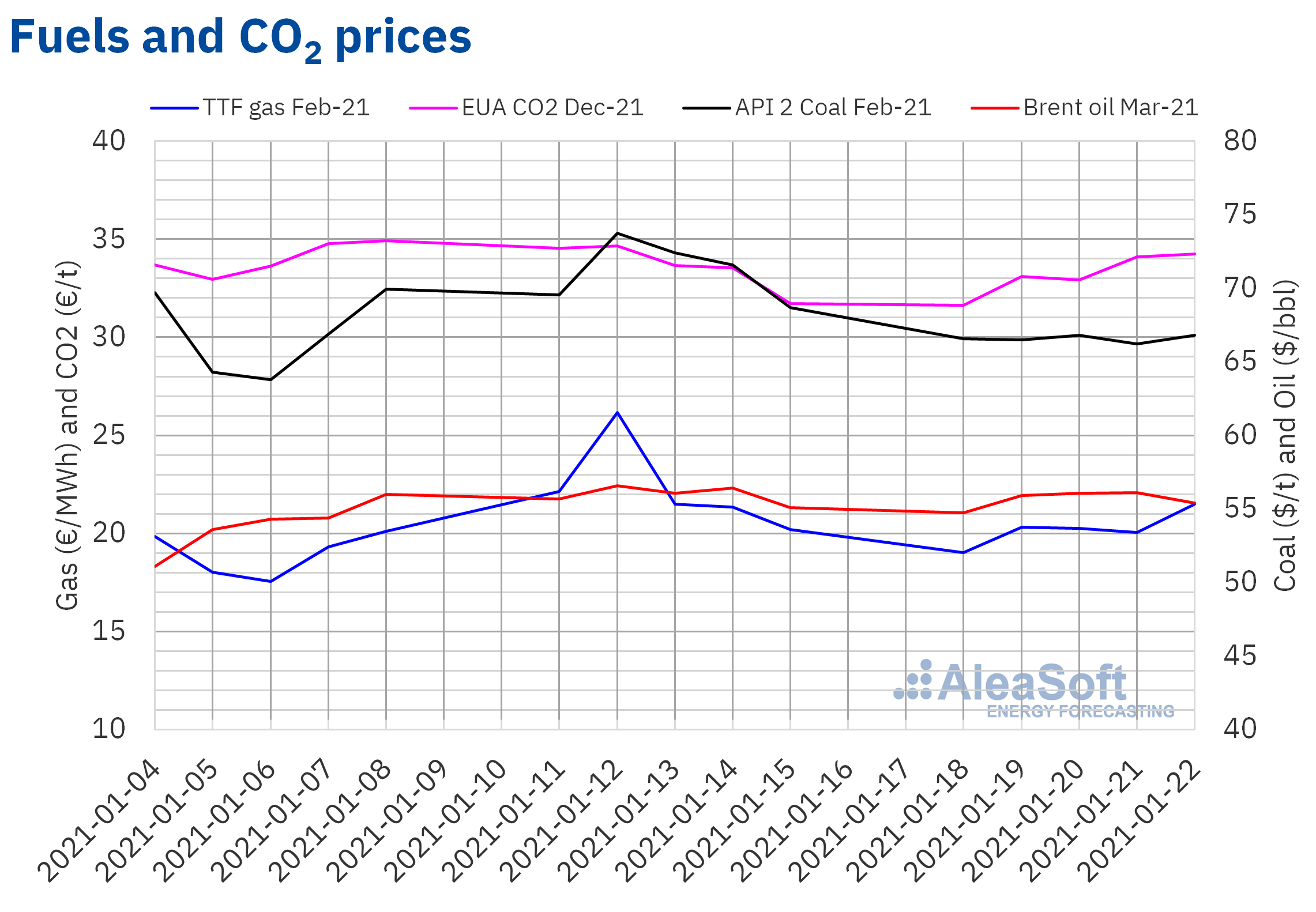 On February 18, the third part of the series of webinars “Prospects for the energy markets in Europe from 2021” organised at AleaSoft will be held, which will also feature the participation of speakers from Engie. In the webinar, special attention will be paid to the PPAs and the renewable energy auctions, analysing how the coexistence of these two financing alternatives for the generators will be. The corporate PPAs and the attractiveness of the PPAs from the buyers’ point of view will also be discussed. Later, on March 18, the fourth part of this series of webinars will be held, in which there will be invited speakers from EY (Ernst & Young).

The mid and long‑term prices curves allow analysing the markets prospects for the coming years. But in addition, these forecasts can be useful for retrospective analysis. For example, in the audits they allow analysing if the decision of investment, merger, acquisition, purchase of energy or PPA signing that was taken in the past was reasonable taking into account the estimates available in that moment.

At AleaSoft a workshop is being organised that aims to show how to make the most of the mid‑term market prices forecasting and stochasticity. This workshop will be held on February 11.

The European electricity markets started the year with significant price increases. At AleaSoft, the Alea Energy Database (AleaApp) was developed, in which the data from the energy markets are compiled, facilitating their visualisation and analysis, especially in periods of volatility such as those at the beginning of the year. Precisely to show the operation of this platform, a workshop that will be held on February 4 is being organised at AleaSoft.