AleaSoft, January 14, 2021. The TTF gas futures exceeded €26/MWh on January 12, this being the highest value in at least the last two years. These high prices favoured the increase in prices in most of the European electricity markets in the first days of the second week of January. In the UK market, the prices exceeded €1600/MWh during two hours of this period. The high CO2 prices and increased demand in some markets are other factors that led to the rise in prices.

The prices of most of the European electricity markets continued to rise in the first four days of the second week of January. The N2EX market of UK is the one that registered the highest increase, of 54% compared to the same days of the previous week, reaching values higher than €1600/MWh at the hour 19 of January 13 and 14. 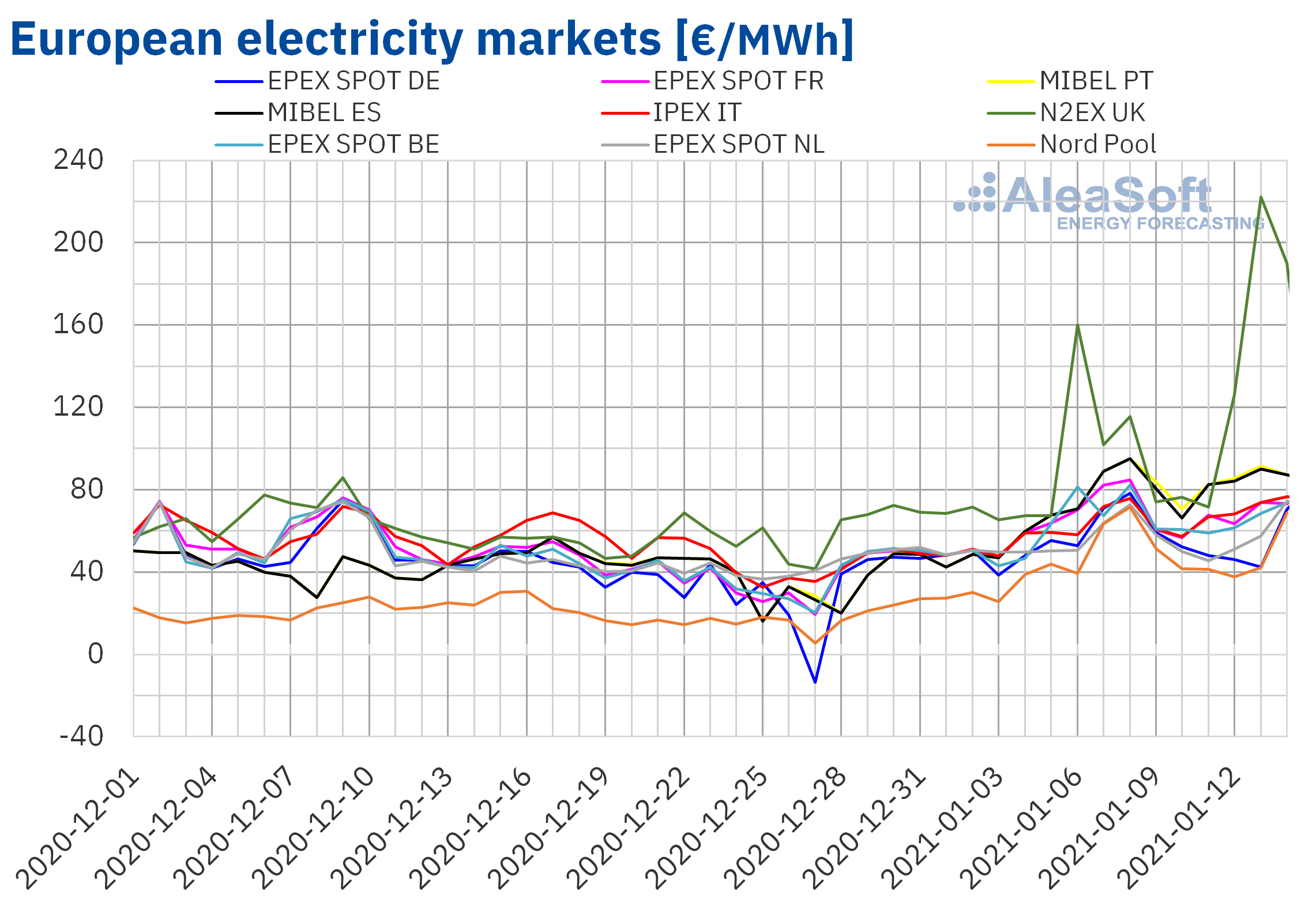 These rises were favoured by the increase in gas and CO2 prices and, in some cases, in electricity demand.

The EPEX SPOT market of Germany was the only one of the analysed markets in which the average of the prices registered between January 11 and 14 fell compared to the first four days of the previous week thanks to the increase in wind energy production. 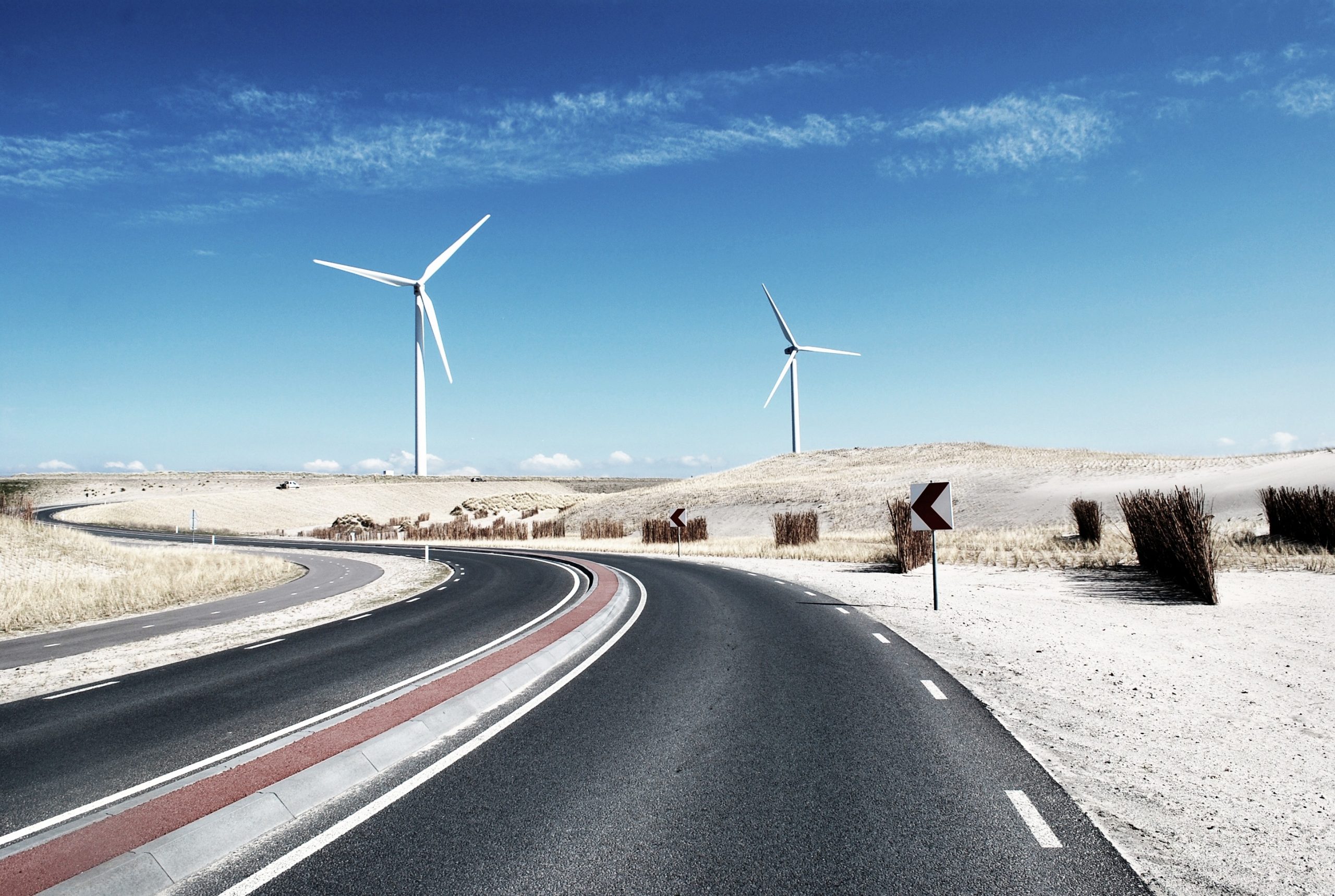 Regarding the European electricity futures, the settlement prices for the product corresponding to the second quarter of 2021 rose in the EEX markets of Germany, France, the Netherlands, Belgium and Italy, the latter two being the markets with the highest increase, of 1.1%. In the rest of the analysed markets, the prices fell. The OMIP market of Spain and Portugal was the one with the highest variation, ‑4.0%. However, in the case of the futures for the next year, the settlement prices of January 13 fell in all the analysed markets, registering the largest decrease, of ‑6.4%, in the NASDAQ market of the Nordic countries.

The TTF gas futures prices in the ICE market for the product corresponding to February 2021 continued to increase and on Tuesday, January 12, they reached the highest value of the last two years, of €26.16/MWh. During the first three days of the week, the prices exceeded €21/MWh.

The cold temperatures in Europe and Asia favoured the price increases, hitting record prices on Tuesday. In the case of Asia, the supply problems favoured the prices soaring, which also influenced the European prices.

In the case of the CO2 emission rights futures for the reference product of December 2021 in the EEX market, although the prices fell compared to the maximum of €34.91/t reached on Friday, January 8, they continue above €33/t.

The Brent oil futures for the month of March 2021 in the ICE market exceeded $56/bbl on January 12 and 13, something that did not happen since the end of February 2020.

The agreements reached by the OPEC+ in its last meeting favoured the recovery of the prices. However, the warnings issued by the World Bank about the economic crisis associated with the coronavirus pandemic, the new confinements in Europe and the increase in COVID‑19 infections in the United States and China, as well as the strength of the dollar, may put downward pressure on the prices. 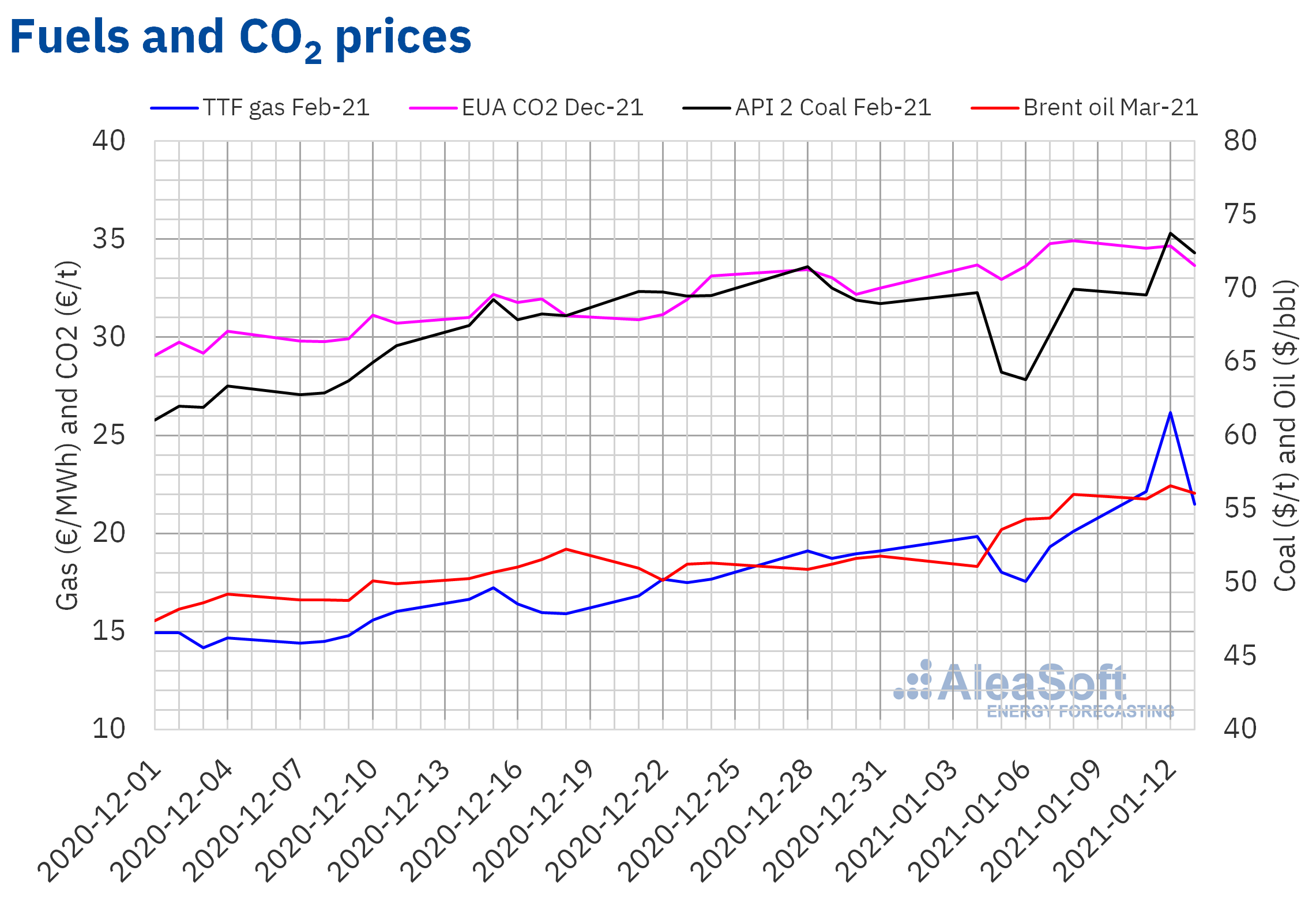 The low temperatures and the return to the activity after the holidays of Christmas and the beginning of the year in some countries favoured the electricity demand to increase in most European markets during the first three days of the week that began on January 11, when compared with that of the same period of the previous week. The largest increase occurred in the Italian market and was 29%. In the case of Spain, the demand increased by 14% and the daily demand record that occurred on January 8 was surpassed. The demand of January 13 was 847 GWh, the highest value since at least 2018. In Portugal, the value of 185 GWh that was reached on Friday, January 8, was registered again, corresponding to the highest daily value registered since 1995. In France, although the average of the first three days of the week was 1.0% lower than that of the first three days of the week of January 4, the demand registered on January 12 is the highest since January 2018 so far. 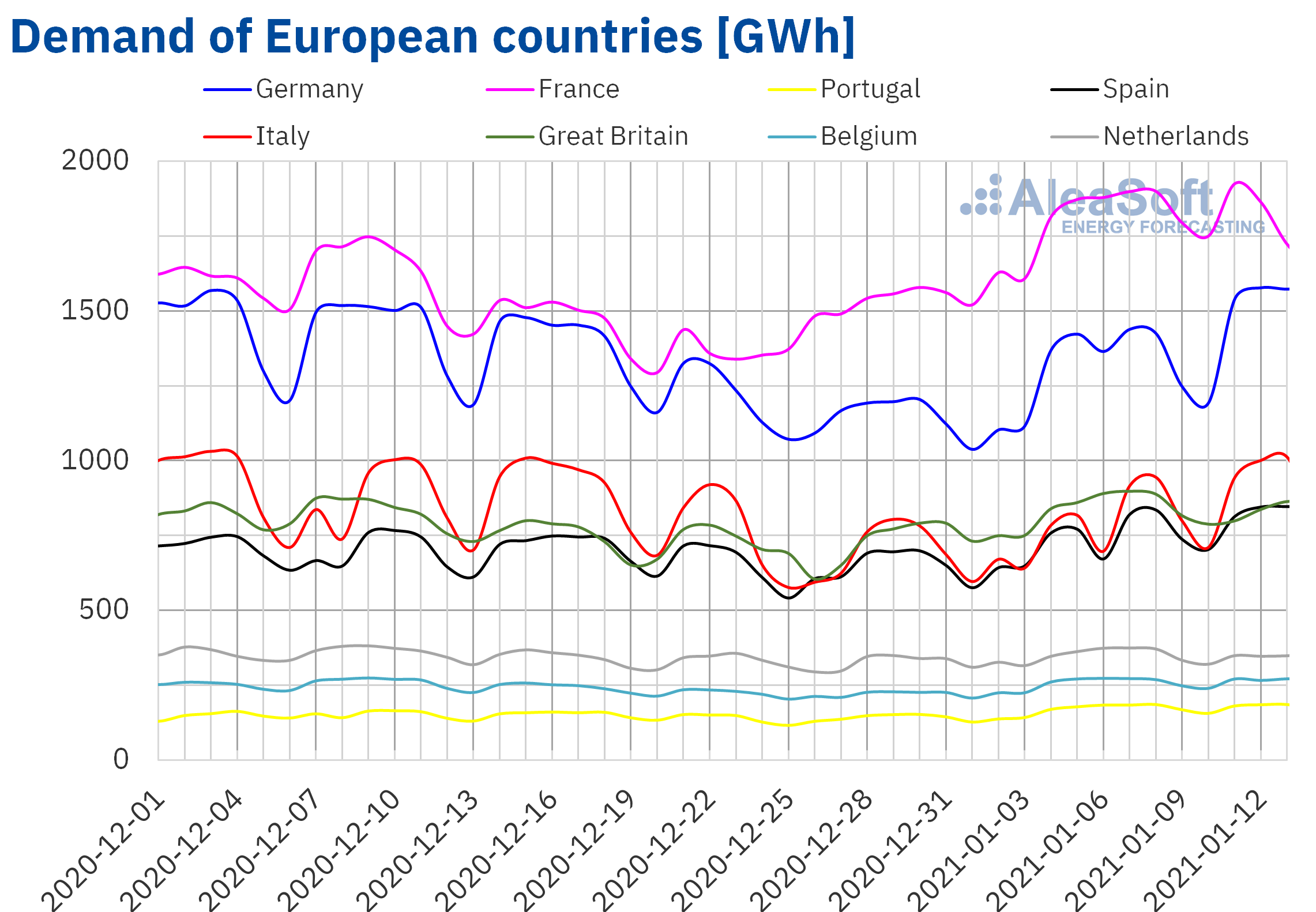 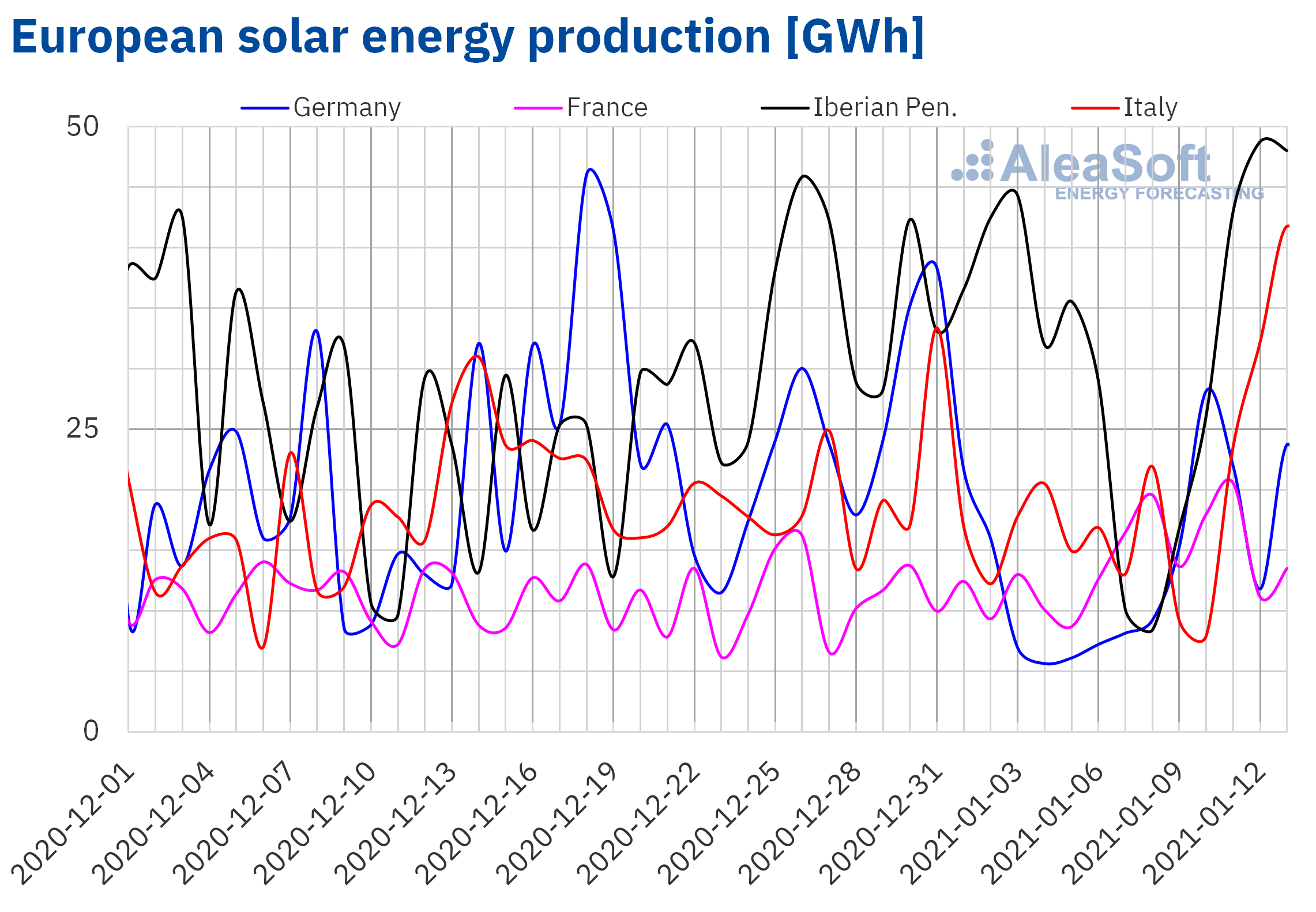 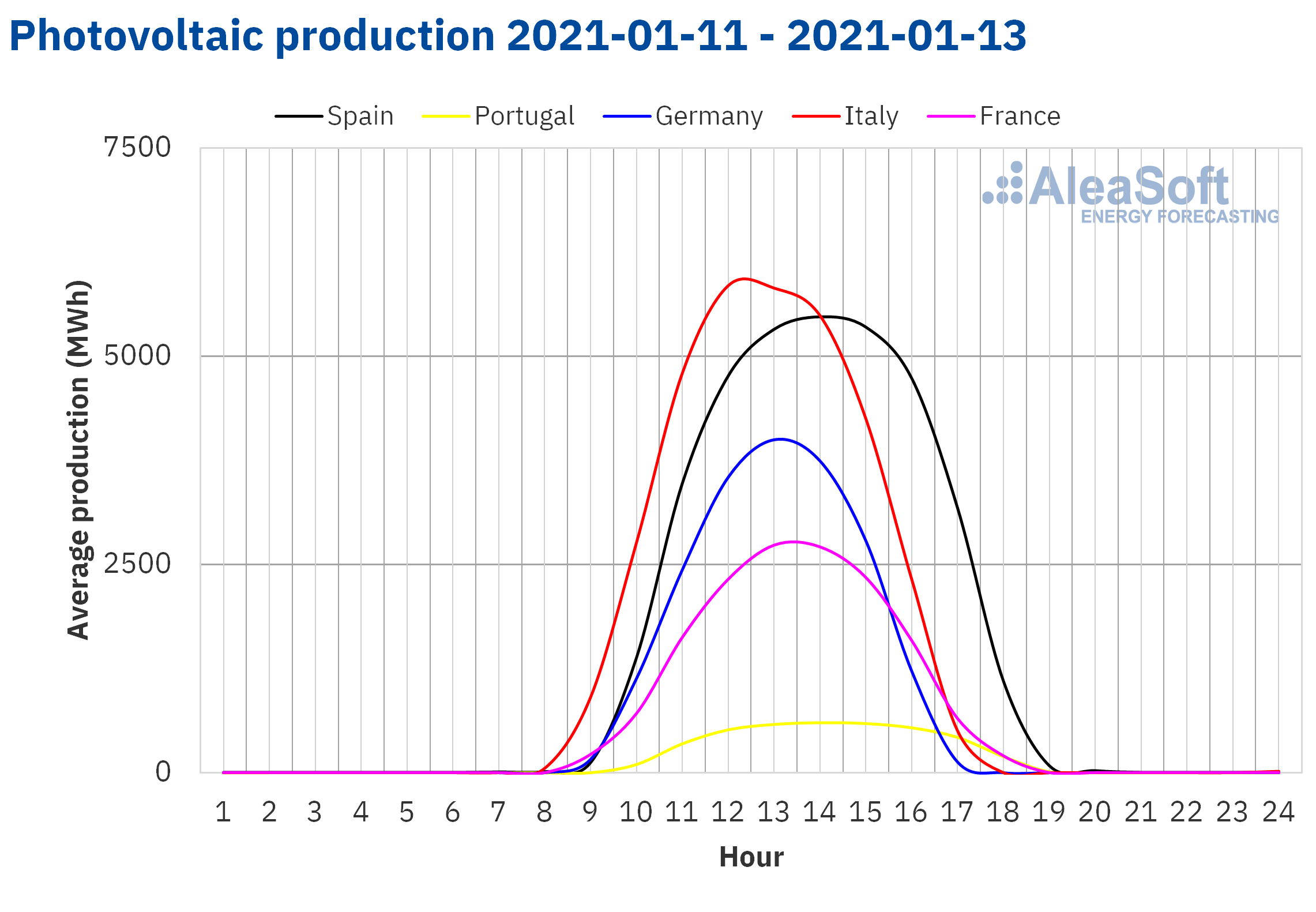 The average wind energy production for the period between January 11 and 13 also increased compared to the average for the first week of the year. In this case, the largest increase was registered in the German market and it was 229%. 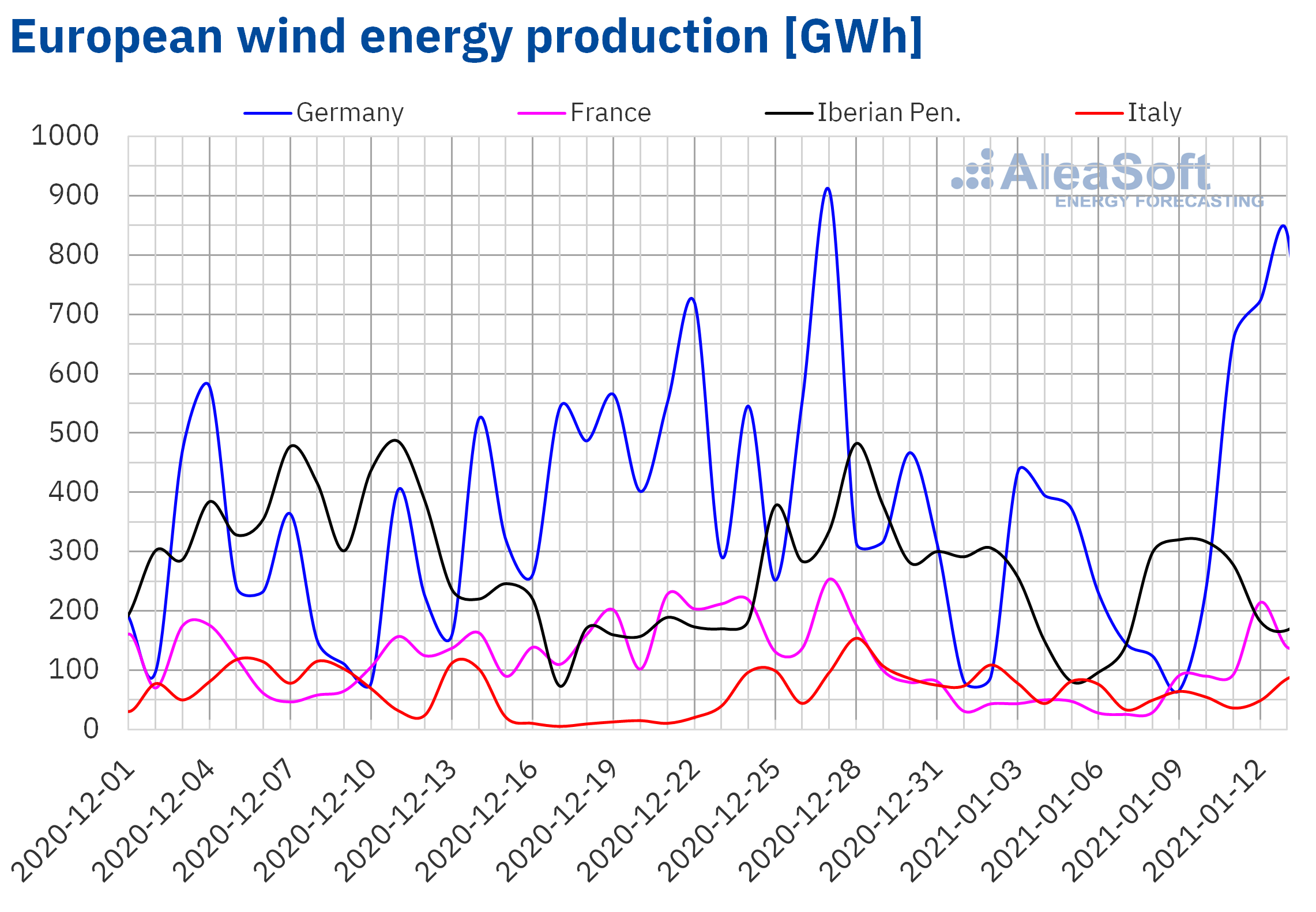 On January 14, the webinar organised at AleaSoft with the participation of speakers from PwC Spain “Prospects for the energy markets in Europe from 2021 (II)” was held with success of participation. The recording can be requested at this link or writing to webinar@aleasoft.com. The next part of this series of webinars will be held on February 18, this time with guest speakers from Engie, and later, on March 18, speakers from Ernst & Young (EY) will participate in the fourth edition of the webinar.

The market observatories are available on the AleaSoft’s website, which allow visualising the evolution of the energy markets with data that are updated daily. Using this tool, it is possible to analyse the record demand and prices values that are being reached during the first days of January in the European electricity, fuels and CO2 markets.

The probabilistic forecasting with confidence bands, both in the mid and the long term, provides a clear vision of the future of the markets that allows managing the market prices risk reliably and developing strategies for the high prices scenarios such as those of the first half of January.

PrevAnteriorThe electricity market is in balance: the high prices of the start of January are exceptional
SiguienteThe production of green hydrogen will create a floor in the electricity markets prices and it will avoid a great part of the curtailmentsNext
Menu
Facebook-f Twitter Linkedin Instagram