The electricity market is in balance: the high prices of the start of January are exceptional

AleaSoft, January 14, 2021. The high prices reached in the electricity market generated a great stir in the media and in the Spanish politics, and some voices even once again asked that the market rules are changed to avoid this type of situation. The Spanish electricity market is part of the European electricity market with which it shares the operating rules. It is also a market in balance between those who produce and those who consume, sometimes some benefit, and other times, others.

During the first and second weeks of January, the prices of the Spanish MIBEL electricity market rose considerably, reaching record values. The price of January 8, of €94.99/MWh is the highest in the history of the market so far. Also, the price of January 9, at the hour 21, was €121.24/MWh, the highest registered hourly value since a price of €145/MWh was reached on December 26, 2010, at 22. 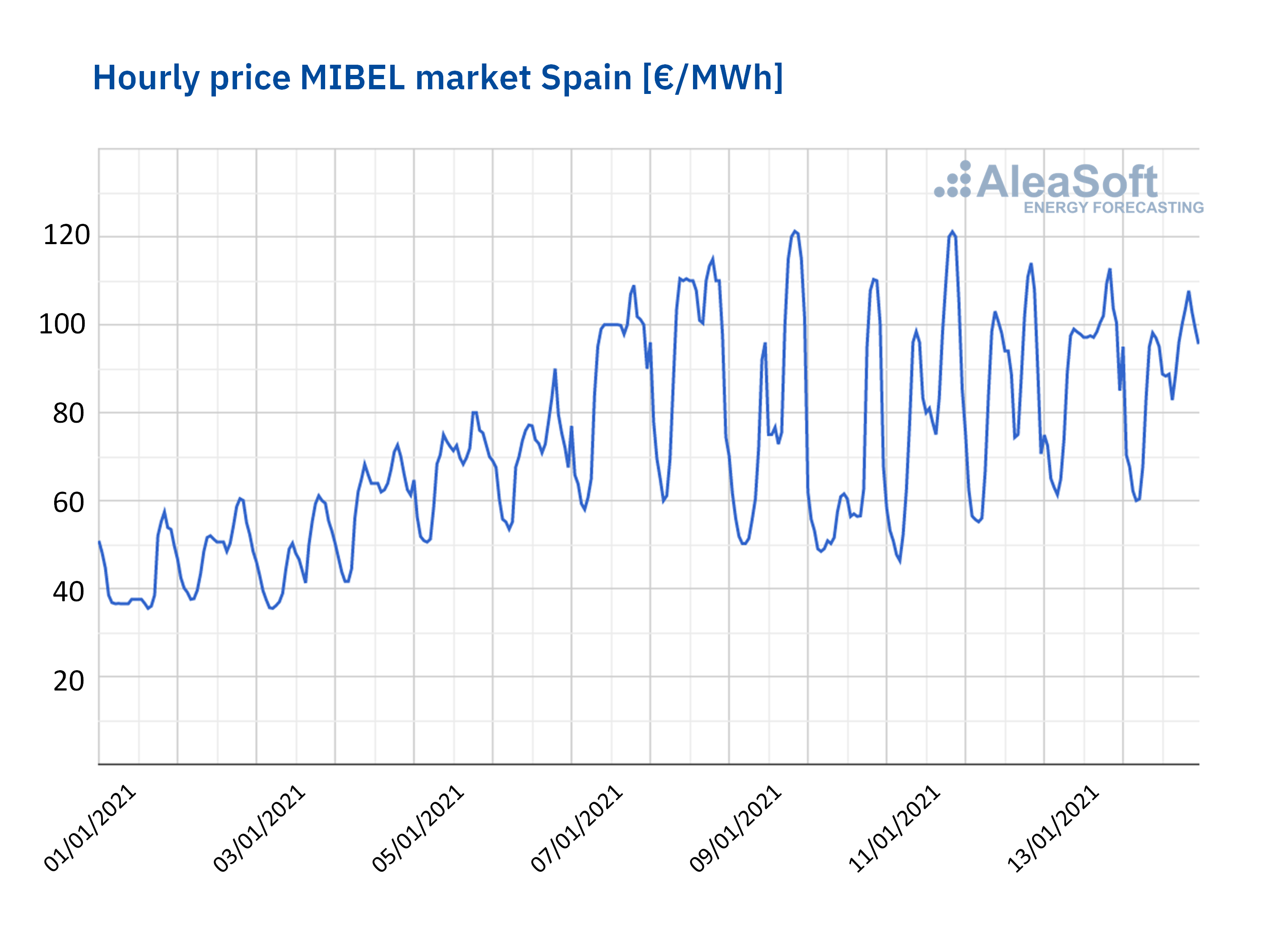 This fact caused a great repercussion in the media and in the Spanish politics and the debate on whether the market rules should be modified was reopened. However, this is an exceptional situation, in the same way that the meteorological situation caused by the storm Filomena is exceptional. 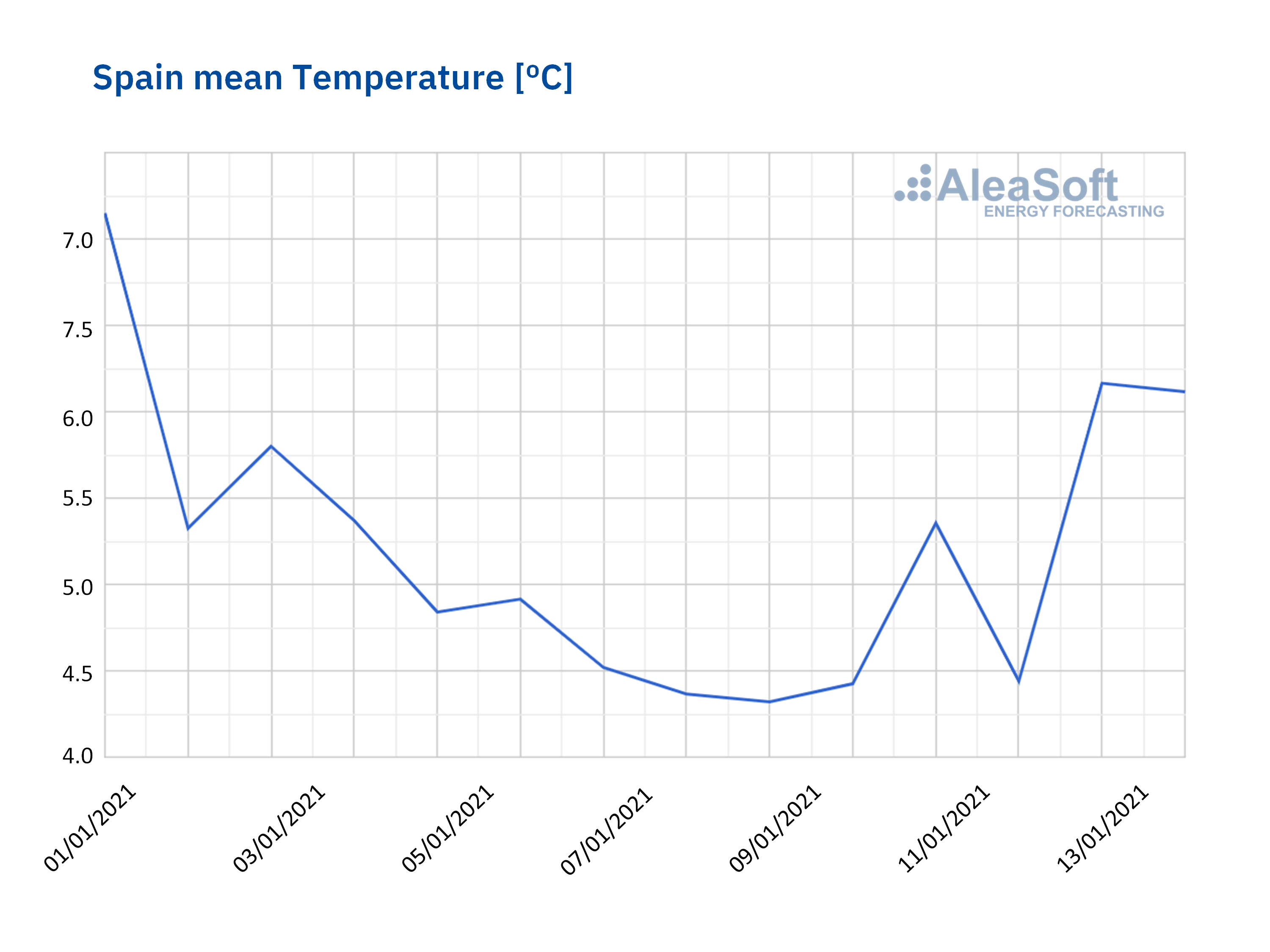 The drop in temperatures caused a significant increase in electricity demand. The renewable, hydroelectric, solar and wind, energy production was not enough to cover the excess electricity demand and it was necessary to produce more with thermal generation, mainly with combined cycle gas turbines. This electricity production with combined cycle gas turbines was more expensive due to the high price that the natural gas and the CO2 emission rights currently have. The TTF gas price exceeded €25/MWh, something that did not happen since November 2018, and in the Spanish MIBGAS market the price exceeded €55/MWh. The CO2 is at record highs, and was very close to reach €35/t.

The gas prices rose for various reasons. In Asia, the low temperatures triggered the demand, something that also happened in Europe. In the case of Spain, there were also problems in the supply of natural gas from Algeria, becoming another element that drove up the prices. On the other hand, the gas is a limited resource from the point of view that it is transported by ships, stored in tanks, and it must be paid for storage, which means that everyone has the minimum gas they intend to use. If a cold snap suddenly arrives and there is a lot of demand, as happened in the first days of January, it is possible that the combined cycle gas turbines do not have enough reserves and they have to buy spot gas, so the price becomes more expensive. In the gas system there are protocols that allow the operating gas reserves to be used to try to mitigate the critical gas shortage situations.

As it can be seen, multiple factors coincided: increase in demand, increase in gas and CO2 prices.

The high prices of recent days also occurred in the rest of Europe. For example, in the case of the N2EX market of UK, the prices exceeded €1600/MWh in two hours of this period.

Operation of the Spanish electricity market

It is a marginalist market. It works like an hour‑by‑hour auction. The lowest selling offers are matched to the highest consumption offers. The nuclear technology and the renewable energies are matched first. What remains to be matched is called hydrothermal gap. This is the demand that must be covered with hydroelectric and thermal, either gas or coal, energy production.

In general, the price of each hour is determined by the cost of producing with gas, adding to it the CO2 emission rights price.

The Spanish market prices are in the upper middle range when compared with the main European electricity markets prices. The N2EX market and the IPEX market of Italy generally have higher prices because they depend more on the gas price. France has three quarters of nuclear electricity production and Germany has a lot of renewable energy and it is connected to the Nord Pool market of the Nordic countries. In general, each market has a different mix, but the Spanish market prices are not the highest as it is often said.

To know if the price is high or low, an annual aggregation must be made, that is, comparing how the price evolved in the last 15 years.

What does this mean? The fact that the electricity price in Spain remained stable since 2005 at an average of €45/MWh means that taking inflation into account, the price decreased by 2% annually. If an article in 2005 cost €45, due to the effect of the annual inflation the cost should currently be €62, 50% more.

Which is the reason? Mainly the introduction of the electricity production with renewable energies. The renewable energy production is the main beneficiary of the marginal prices set by the gas and the CO2. This benefit is the stimulus for the investors to continue promoting this new industry of the future.

Should the electricity market be changed?

The electricity market cannot be changed as it is part of the European electricity market, which implies that the standards established for all members must be met. At the moment the market prices are high but there were periods of lower prices when the producers were affected. The market is in balance between those who produce and those who consume. Sometimes, some benefit and other times, others.

In general, the energy policy of the governments and the European Union has been adequate in the last 20 years. Not only the prices remained stable, but the electricity is being generated with less CO2 and fewer fossil fuels imports each year. In addition, this trend must continue until reaching zero emissions of polluting gases in the next 30 years.

Effect of the price increase on the electricity bill

In Spain the electricity market price is 35% of the total, so the impact will be cushioned. The remaining 65% is what are called fixed or regulated costs, of which 25% correspond to taxes.

Analysis of the evolution of the energy markets

At AleaSoft an informative work is being carried out through webinars on the evolution of the energy markets. The recording of the last webinar that was held on January 14, in which speakers from PwC Spain also participated, can be requested through this link. The next part of the webinar will be held on February 18, this time with the participation of guest speakers from Engie and on March 18, the third webinar will take place with speakers from Ernst & Young (EY).