AleaSoft, January 11, 2021. The low temperatures registered in Europe during the first week of 2021 caused records of hourly or daily electricity demand in various markets of the continent and led to the increase in gas and CO2 emission rights prices. The low wind and solar energy production joined this combination of factors, also favouring record prices in several European electricity markets. The European electricity futures markets prices also rose in this context.

For the second week of 2021, the AleaSoft‘s solar energy production forecasting indicates that the production will increase in the markets of Germany, Spain and Italy compared to the previous week. 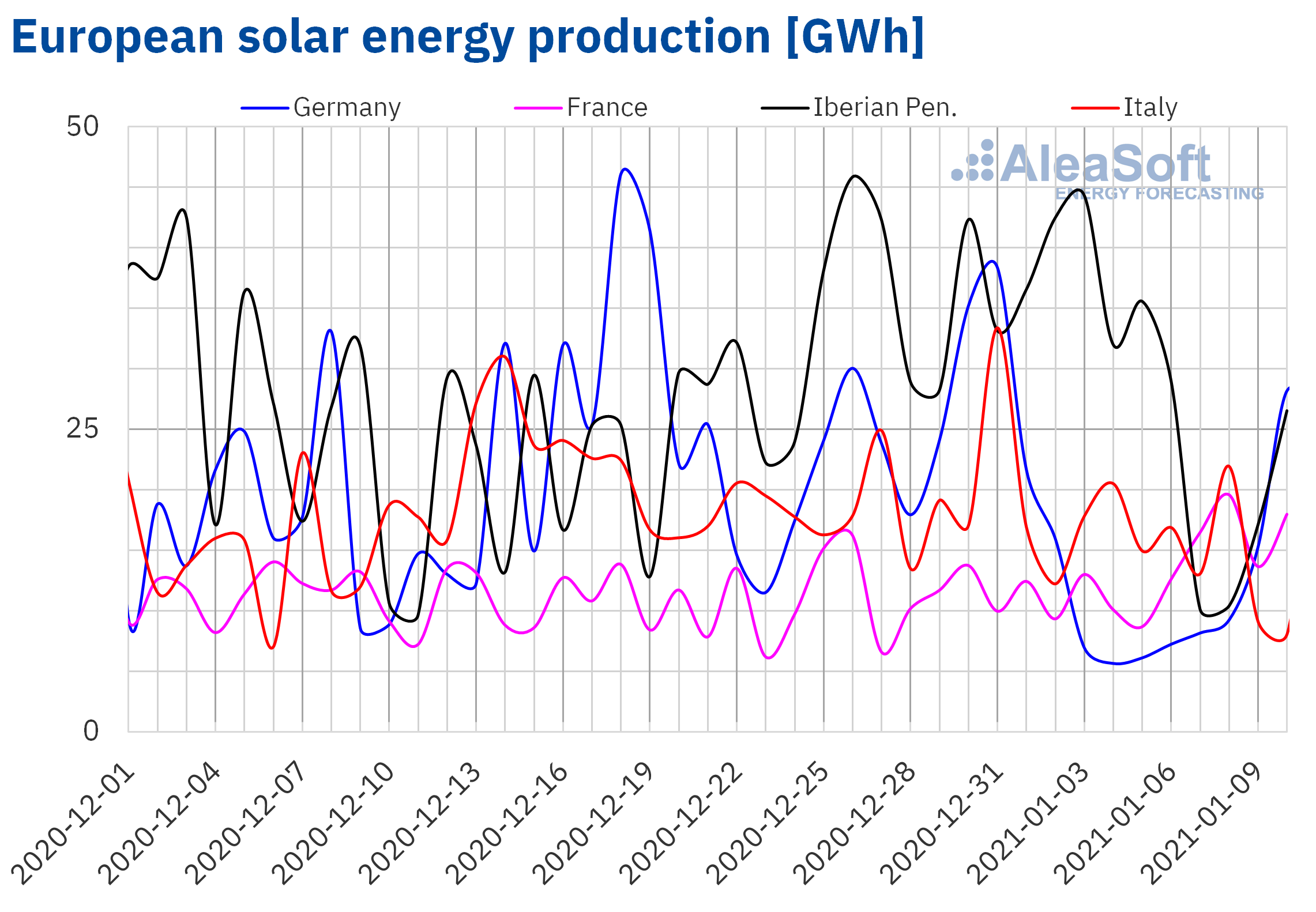 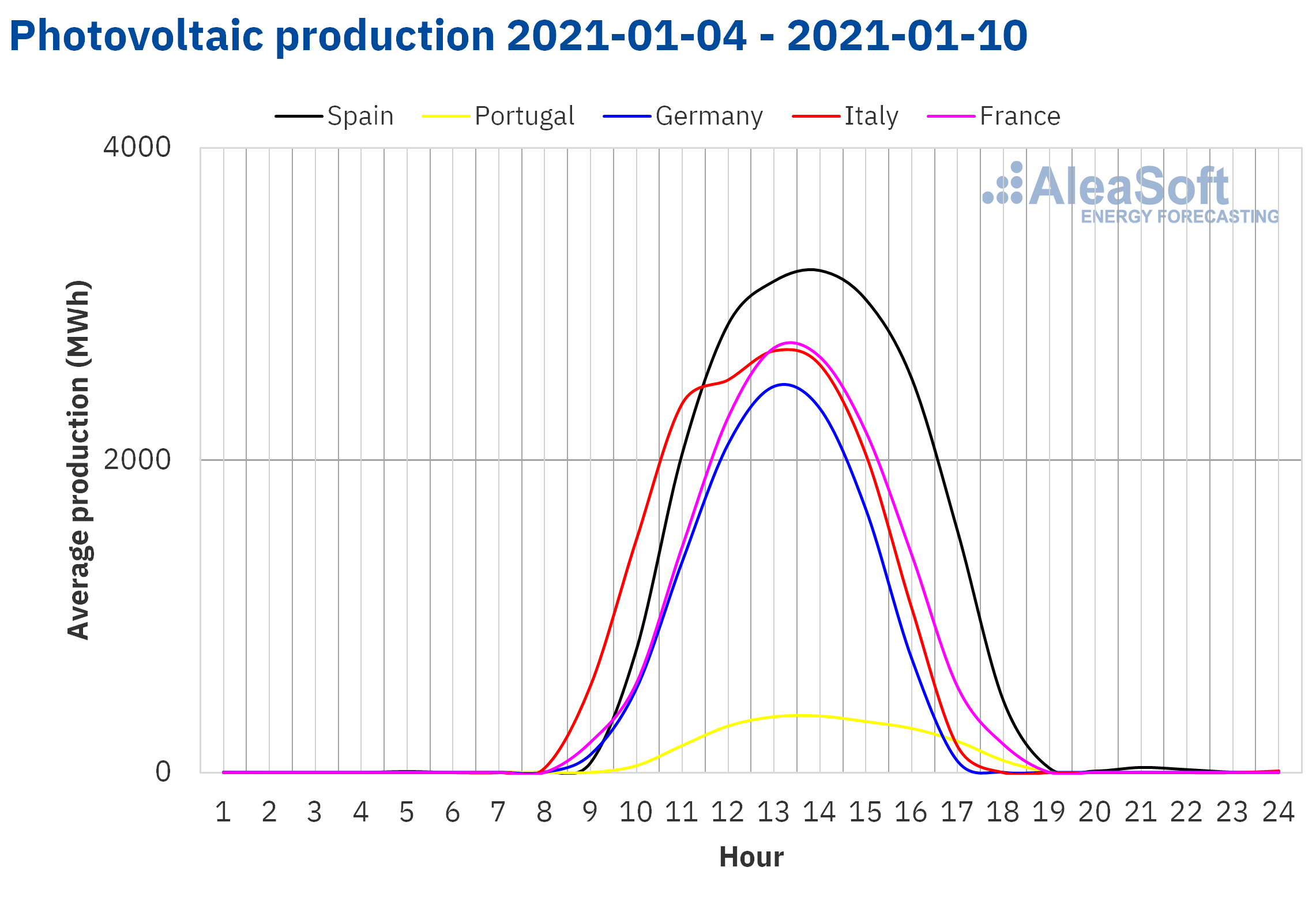 During the first week of 2021, the wind energy production decreased in all the markets analysed at AleaSoft compared to the last week of 2020. The most affected market was the Spanish one, where the production with this technology reduced by 45%. In the Italian market the reduction was close to 41%, while in the French it was 35%. The markets of Germany and Portugal also registered significant drops, with a reduction in their productions of 22% and 13% respectively.

For the week ending next Sunday, January 17, the AleaSoft‘s wind energy production forecasting indicates that in all the markets analysed at AleaSoft the production will increase compared to the previous week, except in the Portuguese market where little variation of the production with this technology is expected. 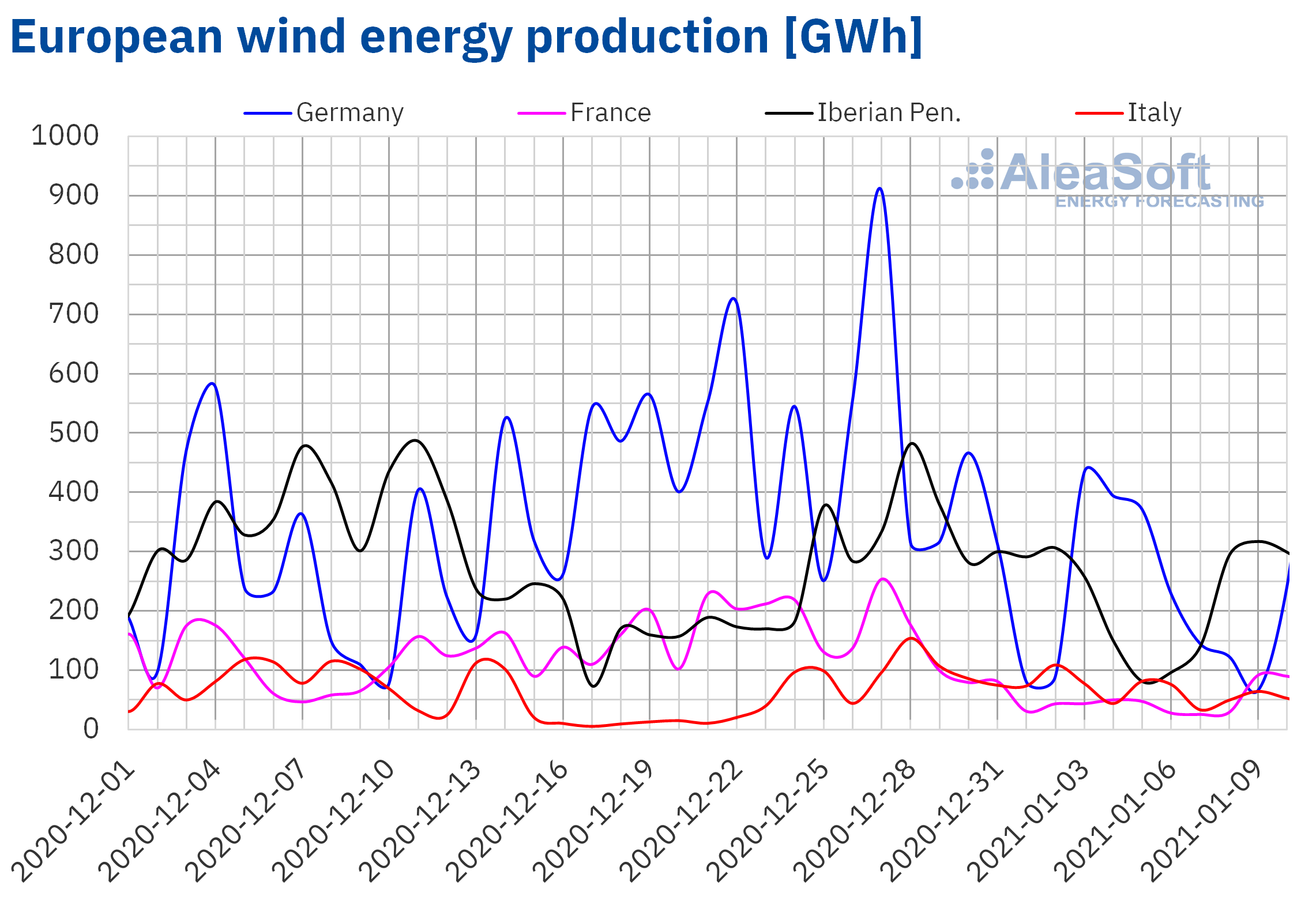 The low temperatures were the protagonists in the week of January 4. The weekly average temperature of the European markets was lower than those registered in all 2020, being almost 5.0 °C lower than the minimum of 2020 in Spain and Great Britain. This cold climate favoured a general rise in electricity demand between 7.0% and 21% compared to the previous week.

January 8 was an unusual day for the European markets in which several records for electricity demand were broken. Portugal broke the record for maximum daily demand since 1995, registering 185 GWh on Friday, January 8. That same day, the Spanish market had a daily maximum record of 835 GWh, the highest since February 8, 2018 according to data from the REE’s daily balance. This mark was favoured by the maximum hourly record of 41 829 MWh at the hour 14 of Friday 8, such a high value was not seen since February 13, 2012, according to the real‑time demand data published by REE.

On the other hand, in the case of France, on Friday, January 8, the value of 1899 GWh was reached, the highest for one day since January 2018, while the day before the maximum daily value in Great Britain since February 2019 was beaten with 898 GWh .

The AleaSoft’s electricity markets observatories are updated with hourly, daily and weekly data and allow analysing the evolution of the demand and the sudden changes that it is registering in recent days. 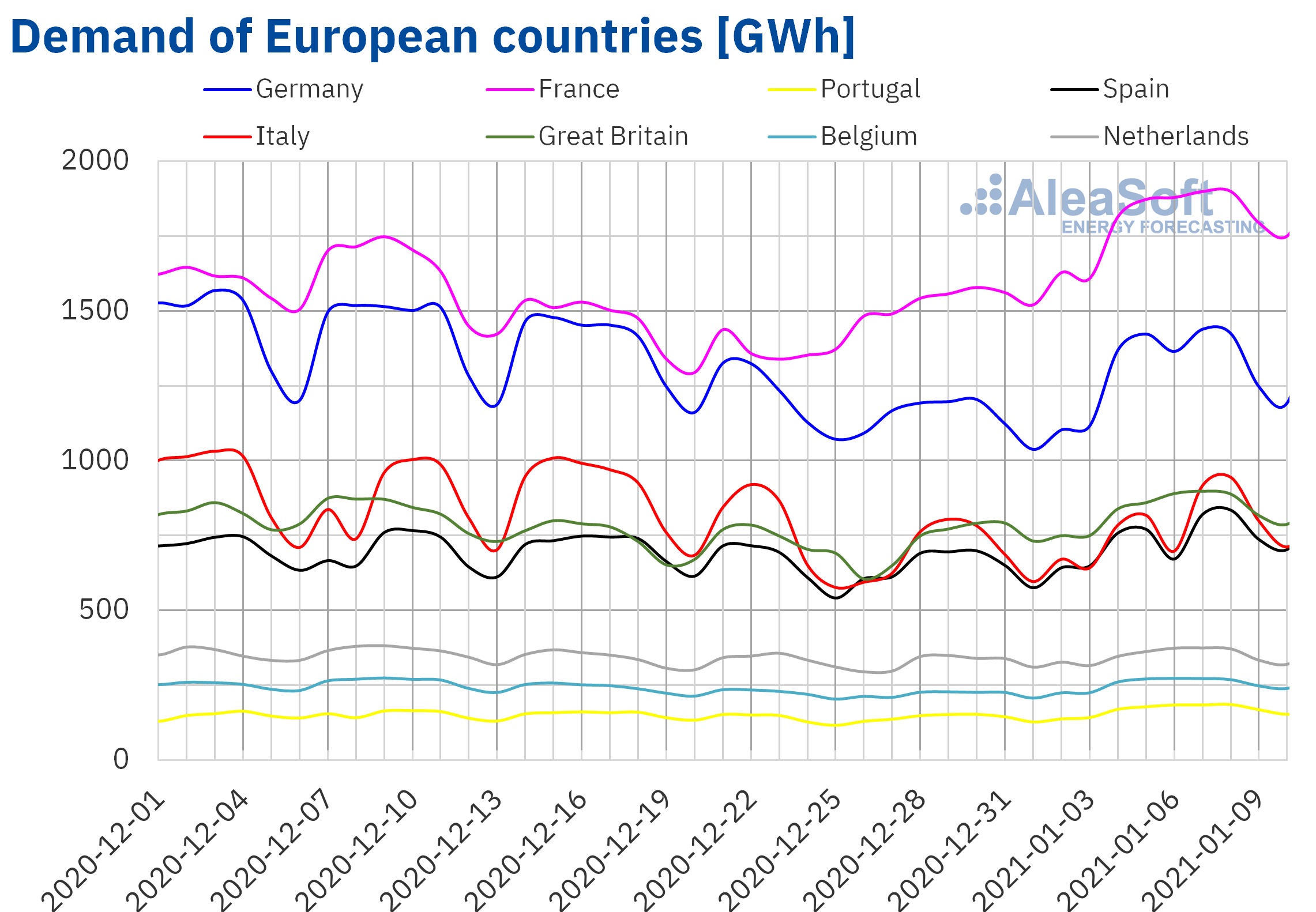 The week of January 4, the prices of all the European electricity markets analysed at AleaSoft increased compared to those of the previous week. The market with the highest price rise, of 104%, was the Nord Pool market of the Nordic countries, followed by the MIBEL market of Portugal and Spain, with increases of 82% and 80%, respectively. In contrast, the market with the lowest price rise was the EPEX SPOT market of the Netherlands, with an increase of 14%. In the rest of the markets, the price increases were between 31% of the IPEX market of Italy and 42% of the EPEX SPOT market of France.

The first week of January, the weekly average prices were above €50/MWh in all the analysed European electricity markets. In the markets of Great Britain, Portugal and Spain the highest averages were reached, of €94.66/MWh, €76.62/MWh and €75.55/MWh, respectively. In the rest of the markets, the prices were between €50.02/MWh of the Nord Pool market and €68.24/MWh of the EPEX SPOT market of France.

On the other hand, the first week of the year, hourly prices above €100/MWh were reached in all the analysed electricity markets. In the Nord Pool market, the price at the hour 11 of Friday, January 8, of €101.77/MWh, was the highest since the beginning of March 2018. In the case of Spain and Portugal, on Saturday, January 9, at the hour 21, an hourly price of €121.24/MWh was reached. This price was the highest since December 2010 in Spain and since January 2010 in Portugal. But the highest hourly price of the week was reached in the N2EX market of Great Britain, when at the hour 19 of January 6, it reached £1000.04/MWh, the highest value in at least the last 11 years in this market. 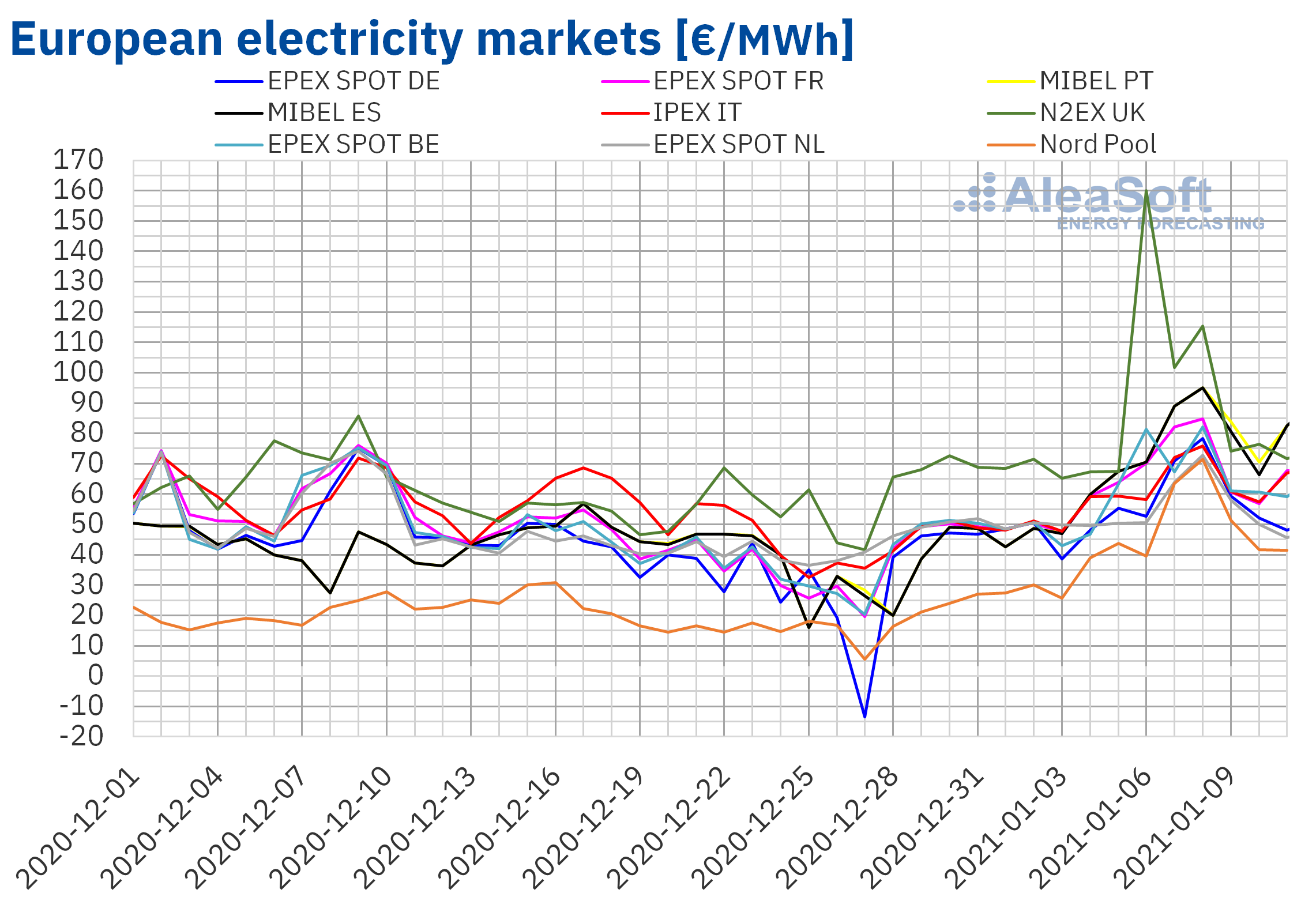 The AleaSoft‘s price forecasting indicates that during the week of January 11, the prices of most of the European electricity markets will fall, influenced by the recovery of the renewable energy production. The exception will be the MIBEL market, where the prices may continue to increase. 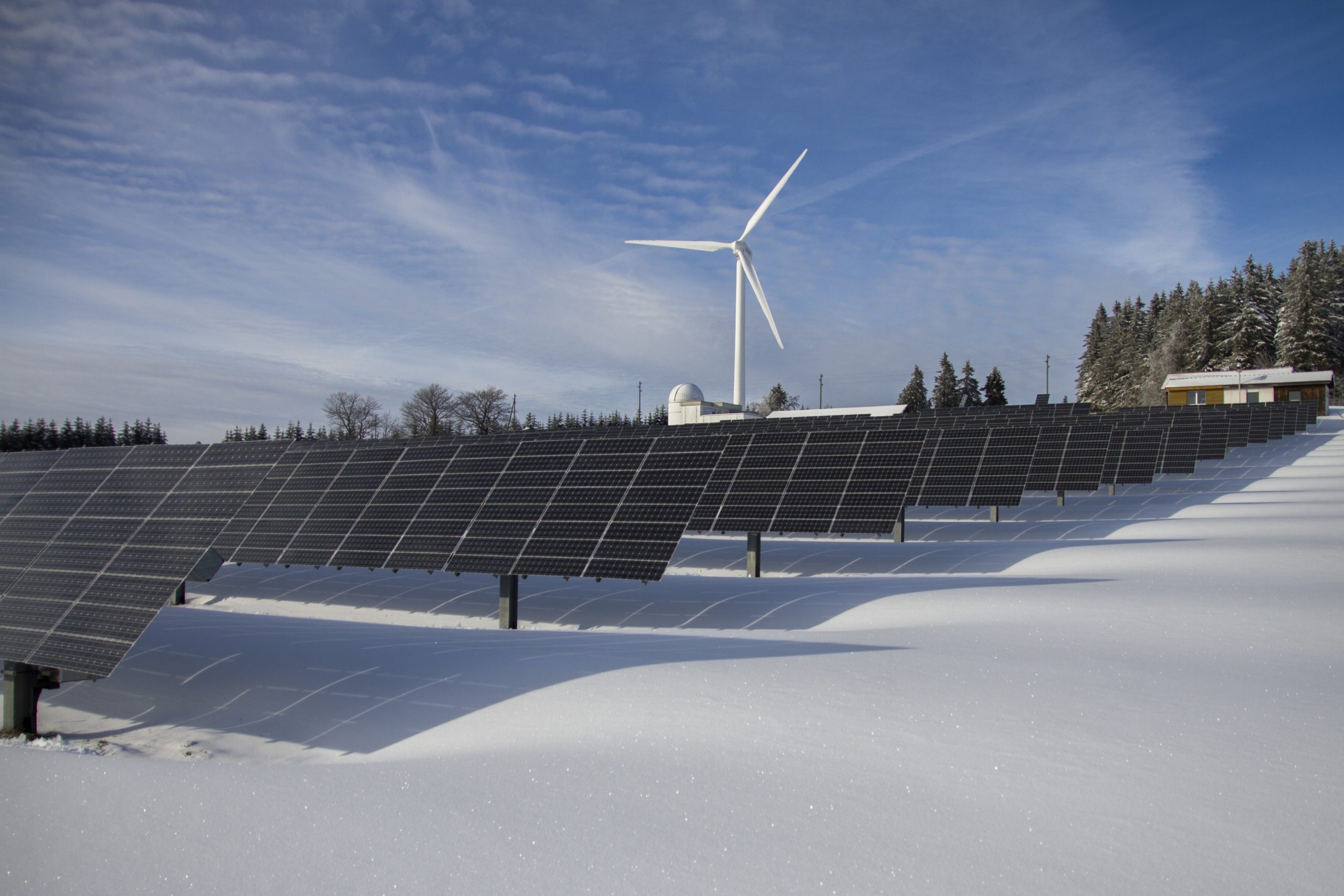 When analysing the behaviour of the markets for the product of the calendar year 2022 in the same period, a very similar situation is observed. The almost general rise also led by the markets of the Nordic countries. But in this case, the EEX market of Great Britain presented a completely different behaviour, registering a decrease of 13% between the last session of the first week of 2021 and the last of the previous week. The British market not only registered changes in its prices in the opposite direction to the rest of the markets, but it was also the one with the greatest variation.

The Brent oil futures for the month of March 2021 in the ICE market began the year 2021 registering on Monday, January 4, a settlement price 1.4% lower than that of the last session of 2020. However, during the rest of the week, the prices increased and on Friday, January 8, a settlement price of $55.99/bbl was reached. This price was the highest since February 2020.

The agreement reached on Tuesday, January 5, by the OPEC+ member states to limit their production in February and March, after failing to reach a consensus on Monday, favoured the price increase of last week.

As for the settlement prices of the TTF gas futures in the ICE market for the month of February 2021, the first week of January, they remained above €17.50/MWh. The highest settlement price of the week, of €20.12/MWh, was reached on Friday, January 8. This price was the highest since October 2019 and was favoured by the low temperatures of the continent and by the fact that in Asia there was a significant increase in demand, also due to the low temperatures that are being registered.

Regarding the CO2 emission rights futures prices in the EEX market for the reference contract of December 2021, the first week of January had a generally upward trend. As a result, on Friday, January 8, a settlement price of €34.91/t was reached, the highest at least in the last six months. The low temperatures and the absence of auctions until the end of January favoured the high emission rights futures prices. 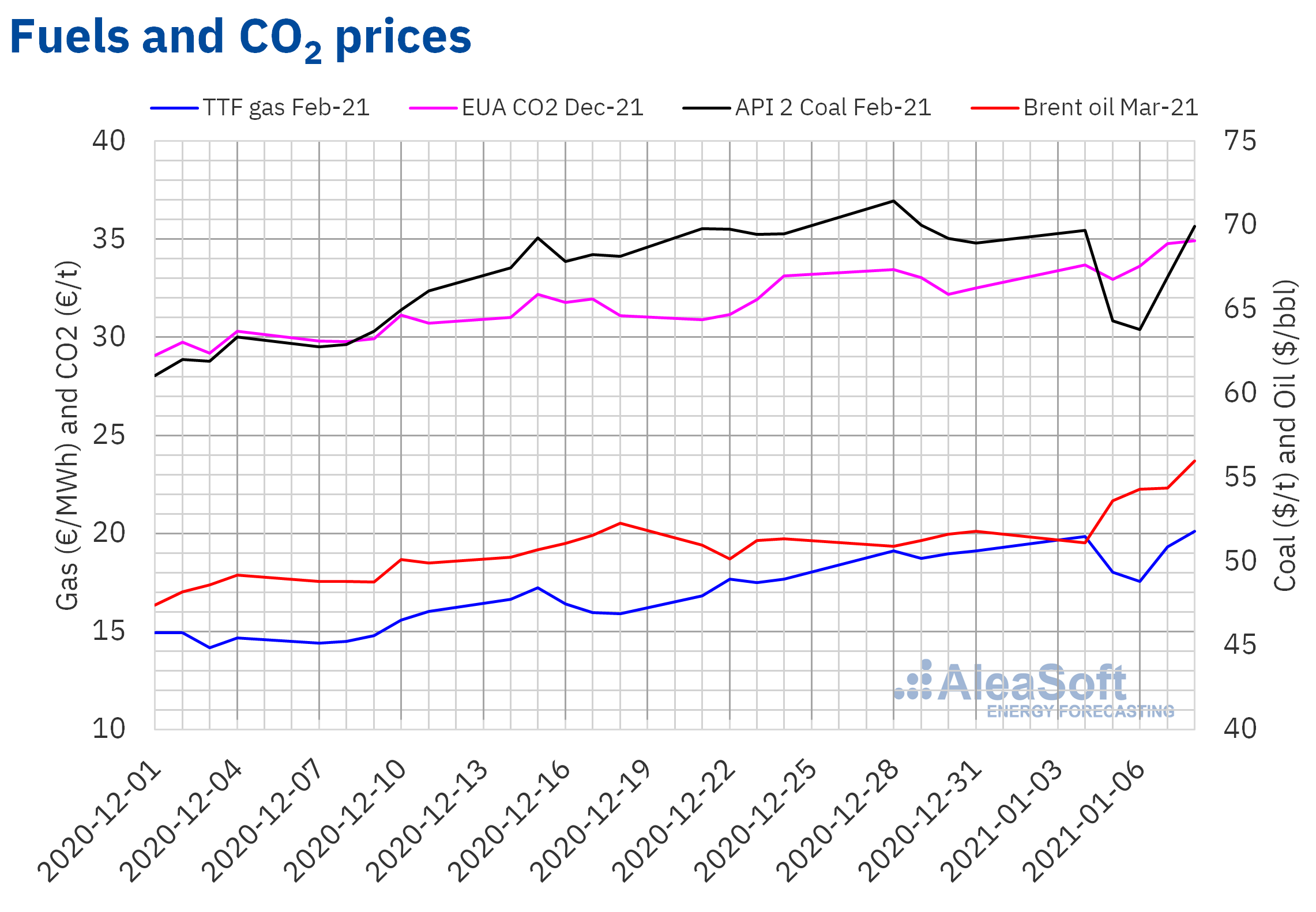 Next Thursday, January 14, the first AleaSoft’s webinar of the year will be held, in which the analysis of the evolution of the energy markets and the prospects from 2021 will be updated. The vision of the PPA market will also be discussed from the consumer point of view. On this occasion, speakers from PwC Spain will participate, Alberto Martín, Energy Sector Consulting Principal and Reyes Gomez, Energy Sector Legal Services Principal, as well as Oriol Saltó i Bauzà, Manager of Data Analysis and Modelling at AleaSoft. Subsequently, an analysis table will be held in which, in addition to the speakers, Óscar Barrero, Partner responsible for Energy Sector Consulting at PwC Spain, Ivan Sanchez Saugar, Financing partner at PwC Spain, and Antonio Delgado Rigal, CEO of AleaSoft, will participate.

The record prices registered during the first days of the year show the importance of the probabilistic forecasting with confidence bands, both in the mid and long term, which provide a clear vision of the future of the markets that allows managing the risk of market prices reliably.

To monitor the demand and price record values registered during the last days in the European electricity markets, the AleaSoft’s markets observatories can be used. This tool includes graphs with hourly and daily data that are updated daily.

PrevAnteriorThe multiple and numerous uses of the PPA
SiguienteEnergy efficiency: what changed since the record for electricity demand in 2007Next
Menu
Facebook-f Twitter Linkedin Instagram