Good times for photovoltaic energy: auction in Portugal and records at the European level

AleaSoft, August 26, 2020. On August 24 and 25, the second solar energy auction was held in Portugal. Most of the winning projects are hybrid systems that combine photovoltaic energy and batteries. With these auctions, the Portuguese Government intends to reach its objectives for installed solar capacity in 2030. In general, the plans at European level to increase the installed capacity of this technology are beginning to bear fruit and in 2020 generation records were already reached in all markets.

The year 2020 is not exactly a good year due to the COVID‑19 pandemic. However, for the photovoltaic industry, the year is very positive. On August 24 and 25, the second solar energy auction was held in Portugal, this time with the particularity that storage projects could participate, in which 700 MW were offered, covering a period of 15 years. According to El Periódico de la Energía, in this auction some lots reached a price of €1.20/MWh, which represents a world record, exceeding the €11.60/MWh previously obtained in Abu Dhabi. Most of the winning projects are hybrid systems that combine the photovoltaic energy with the storage with batteries, which is a boost to the implementation of this electricity generation model, providing the electricity system with greater flexibility. The expected increase in renewable capacity, as well as the decrease in the costs of the storage technologies, will allow the rise of the hybrid systems in the coming years, which in the future will also be used with hydrogen.

According to El Periódico de la Energía, among the winners of the auction are Hanwha Q‑Cells, which won six of the 12 offered lots and was also the one that offered the price of €1.20/MWh, in addition to Endesa and Iberdrola. These are companies that invest with a very long time horizon and also a low offer like the one made by Hanwha Q‑Cells is a great advertisement for a company that belongs to Hanwha Group, one of the largest in South Korea and that is betting heavily in the Iberian Peninsula.

The Portuguese government has the goal of reaching 9 GW of solar photovoltaic capacity by 2030, for which it is organising a series of auctions. In principle there are two each year and a new auction is expected at the end of 2020.

The boost in photovoltaic energy is general at the European level. The plans of the different governments of the continent for 2030 aim to at least double the existing capacity at the beginning of this year. 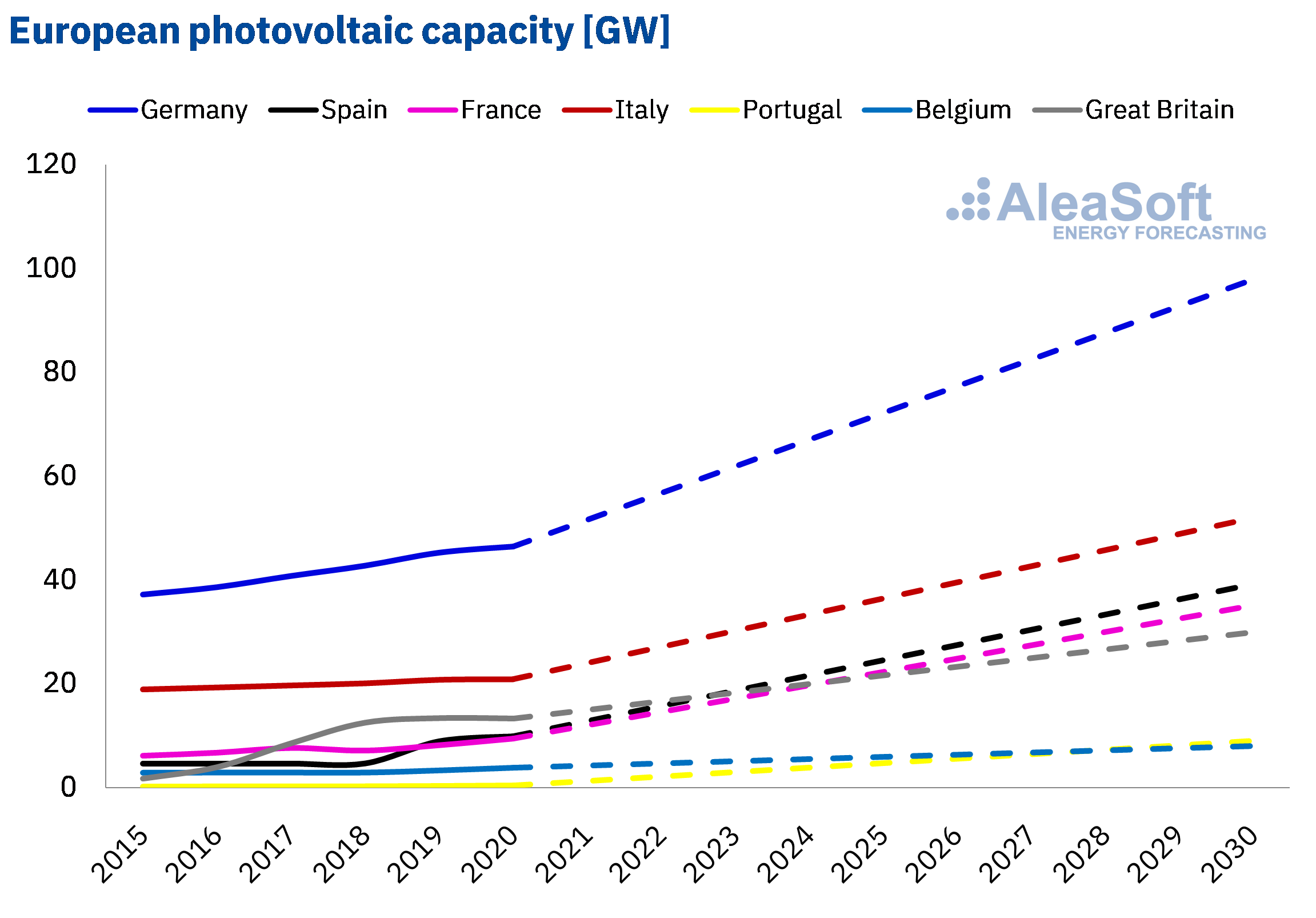 Source: Prepared by AleaSoft using data from ENTSO E, REE, ELIA, National Grid, the NECP of each country and the European Commission.

If the solar photovoltaic energy production data registered up to August 25 of this year is analysed, these plans are already beginning to bear fruit. In all the analysed markets, in 2020 the highest hourly production in history was reached, at least since 2015. The last of these records occurred precisely in Portugal on Saturday, August 22, at the hour 14 (local time). At that time, 628.25 MWh were produced with this technology, an amount 23% higher than the maximum hourly value of 2019.

In Mainland Spain, between January and July 2020, new 947 MW of photovoltaic energy were installed, which allowed that this year until August 25, the 2019 production was already exceeded by 15%. 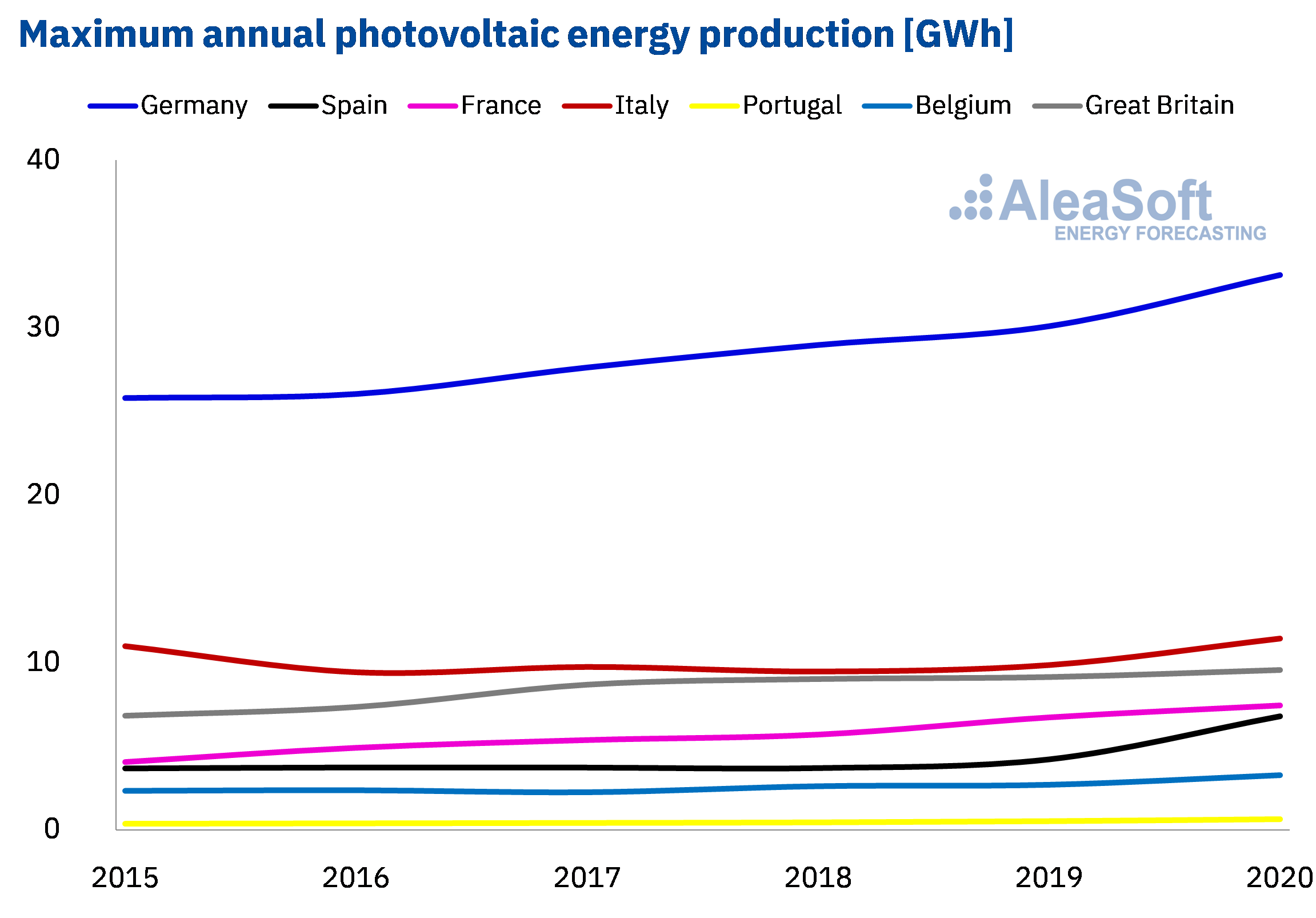 The photovoltaic revolution is a fact, not only in the Iberian Peninsula but also in the rest of Europe, but moreover it is essential to achieve the environmental objectives that the European Union set itself.

PrevAnteriorThe rise in wind energy production and the decrease in demand lower the European electricity markets prices
SiguienteResults of the second Portugal auction: the price of the photovoltaic energy is not €11.14/MWh eitherNext
Menu
Facebook-f Twitter Linkedin Instagram