AleaSoft, December 17, 2020. Although the spot prices of the electricity markets fell in some markets thanks to the recovery of temperatures and wind energy production, the electricity futures are registering increases that are close to 8% since Friday December 11. These are decisive moments to test winter coverage strategies and market price risk management for both producers and consumers of electricity.

The prices registered since Monday, December 14 in the electricity markets of the central-north of the continent represent a significant drop compared to the previous week, caused by the fall in electricity demand as a result of the temperatures recovery, and due to the increased wind energy production. The price drop reached 34% in the EPEX SPOT market in the Netherlands, 31% in the Belgian market and 25% in the British, French and German markets. 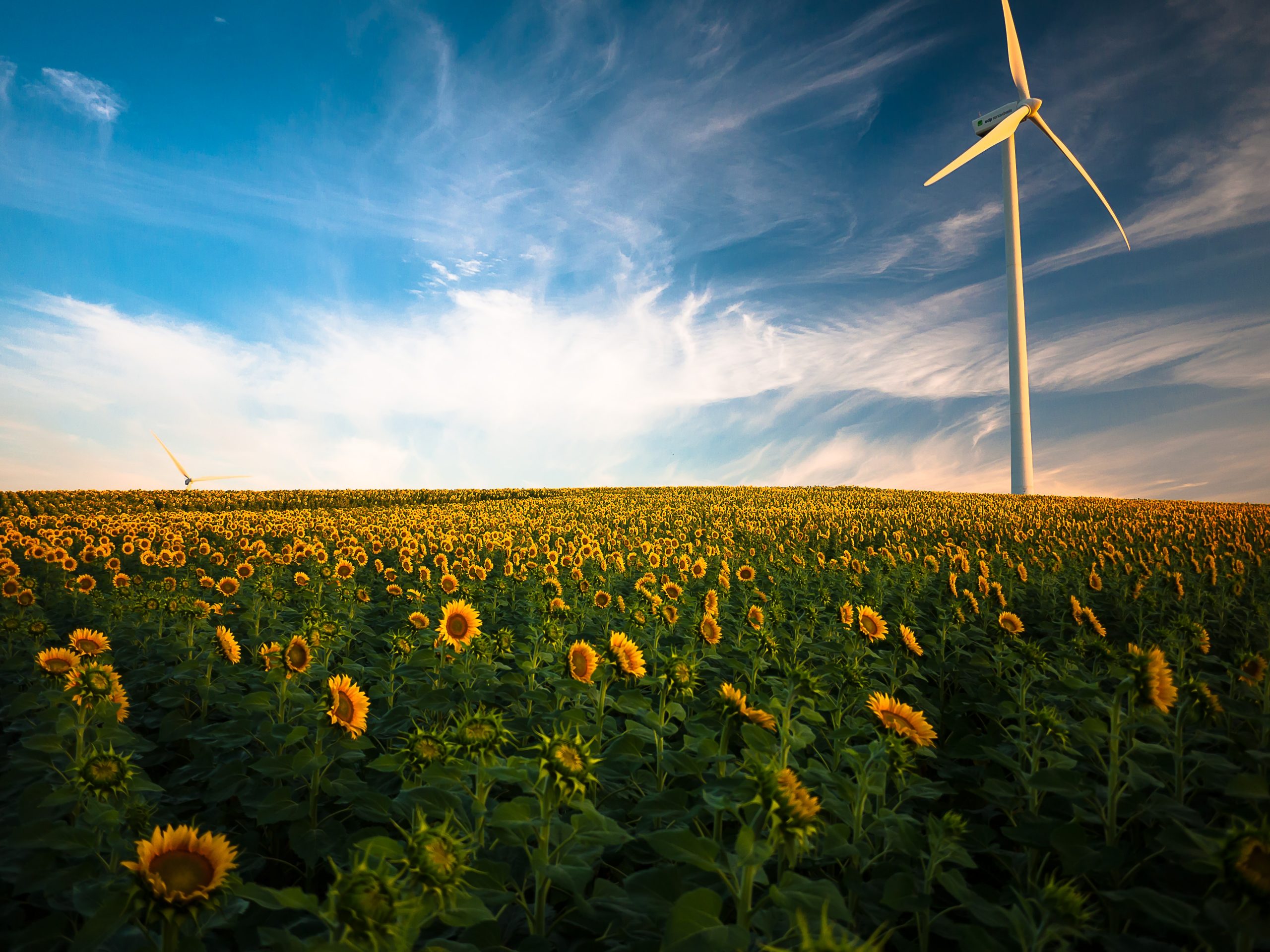 On the contrary, in the south of the continent the evolution of prices was more moderate in the IPEX market of Italy, with a drop of 4%, and with a rise in prices in the Iberian MIBEL market of Spain and Portugal of 29%. In this case of Spain, Italy and Portugal, the evolution of prices has responded to an increase in demand compared to the previous week, during which Tuesday was a holiday, and to the drop in wind energy production. 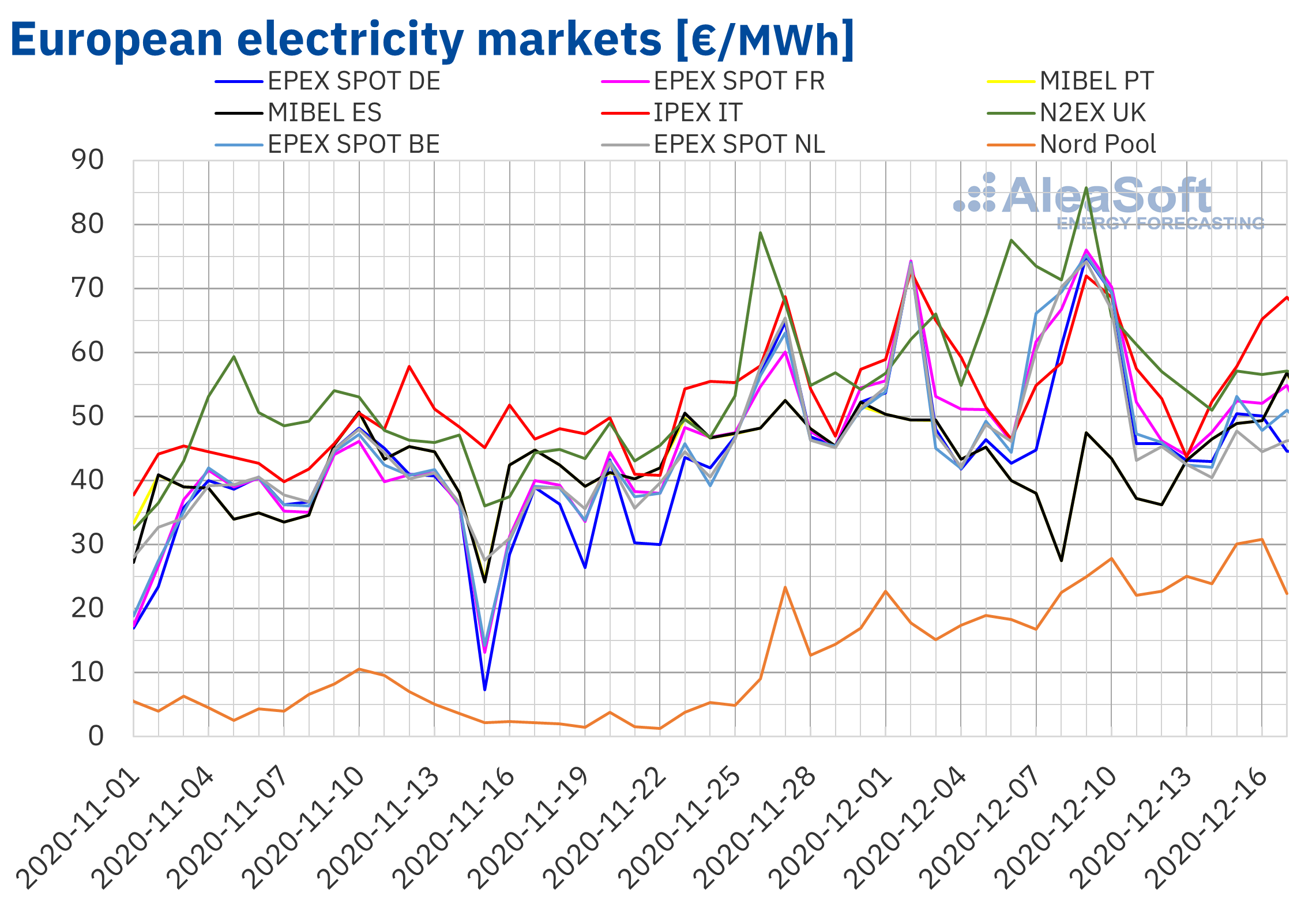 In the southern countries of the continent, Spain, Portugal and Italy, the demand increased due to the holiday of December 8 the previous week. The recovery in demand has reached 16% in Italy and somewhat less in the Iberian Peninsula, registering 6% in Spain and 4% in Portugal. 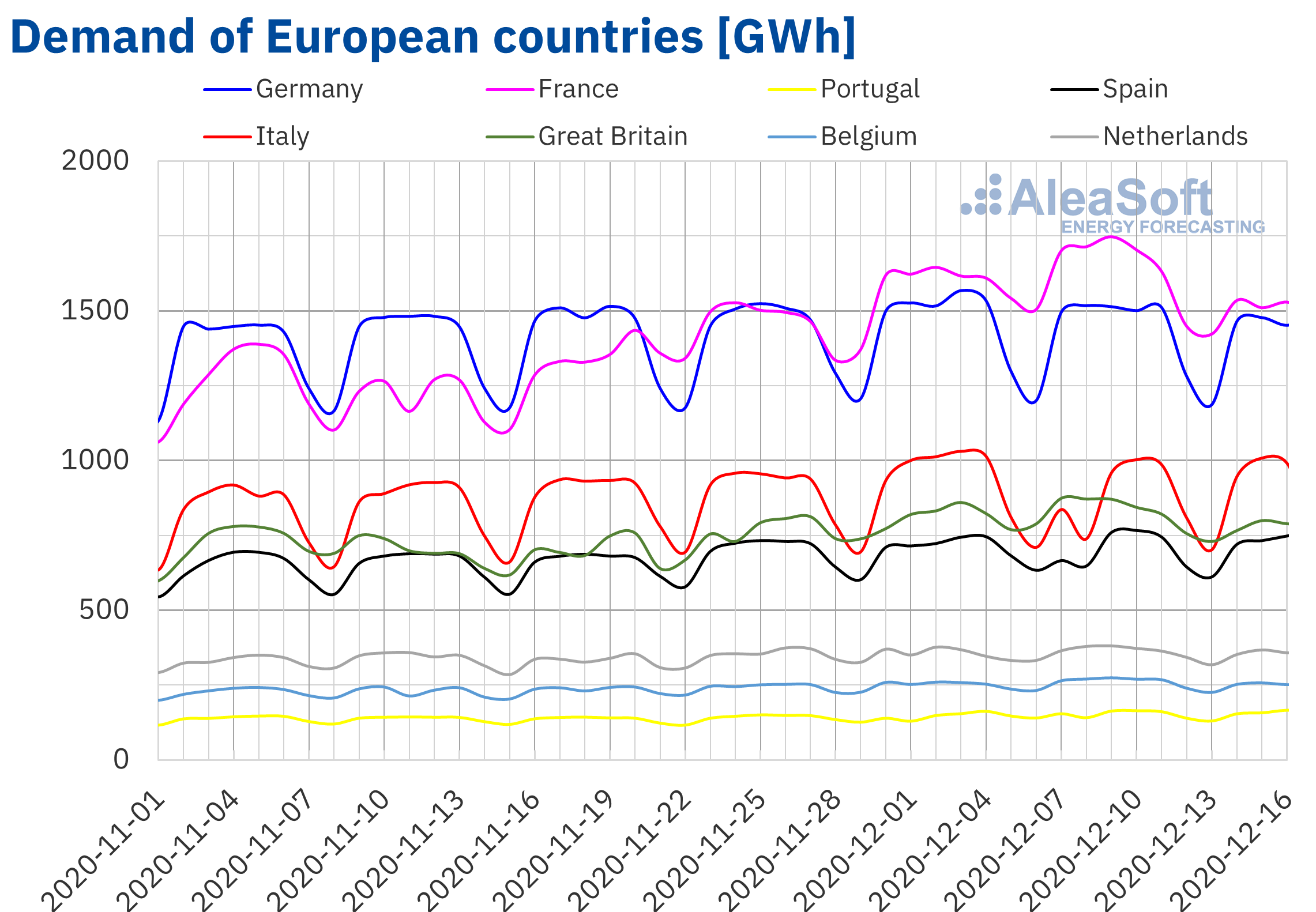 The Brent oil prices continue the upward trend that began at the end of the week of December 7 and broke the barrier of $51 per barrel on Wednesday, December 16, a barrier that had not been exceeded since the beginning of March when prices plummeted 31% in just over a week. The drop in oil reserves in the United States, the world’s largest consumer, and the prospects for a stimulus package for the economy are pushing demand and prices higher.

The TTF gas prices rose by 12% during the first three days of the week of December 14 with respect to the prices of the previous week, reaching €17.23/MWh on Tuesday 15, exceeding the barrier of €17/MWh that wasn’t reached since January. Even so, the prospects for mild temperatures for the rest of the week do not favour an upward trend in demand or prices.

As for the API 2 coal, prices followed the same upward trend with records for gas and oil. Coal futures for January 2021 reached $69.50/t on Tuesday, December 15, a price level that must be returned to October 2019 to find it again. China, the world’s largest consumer of coal, is encouraging its industries to import coal from other regions after domestic prices for the mineral rose. Japan will also require more thermal energy generation this winter, which is expected to be colder than normal, due to the unavailability of its nuclear power plants. Also the increase in gas prices is keeping coal as a more competitive fuel and increasing its demand.

The prices of CO2 emission rights also reached new records earlier this week with €32/t registered on Tuesday, December 15 for futures for December 2021. The increase in emission reduction targets until 55% in the European Union agreed the previous week are pushing the emission prices up. 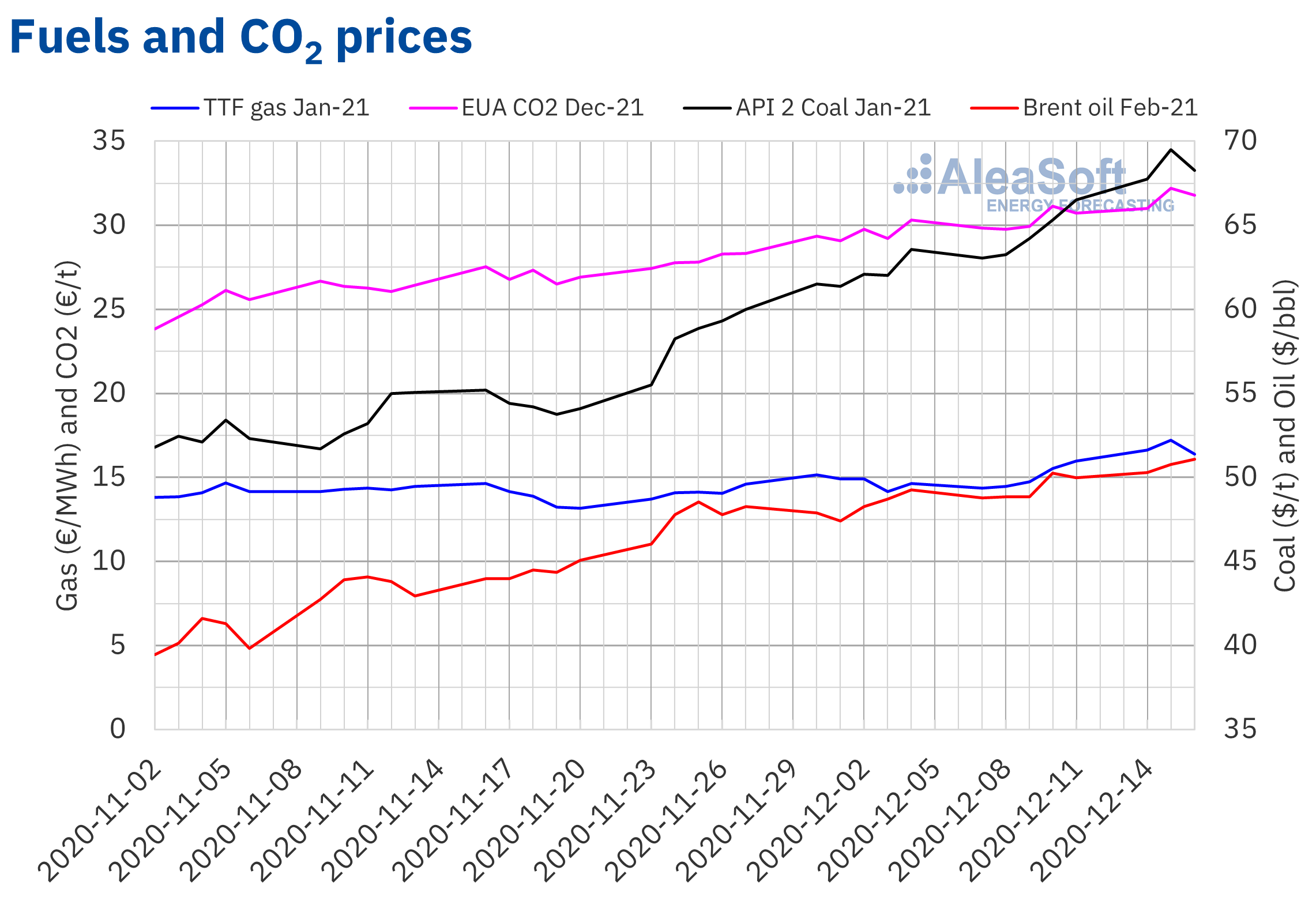 The solar energy production performed somewhat erratically among the main European electricity markets. The largest increase in production was registered in Portugal, with an increase this week of December 14 of 129% compared to the previous week, followed by Germany with 70% and Italy with 48%. In mainland Spain, solar production fell 1% and the fall reached 12% in France. 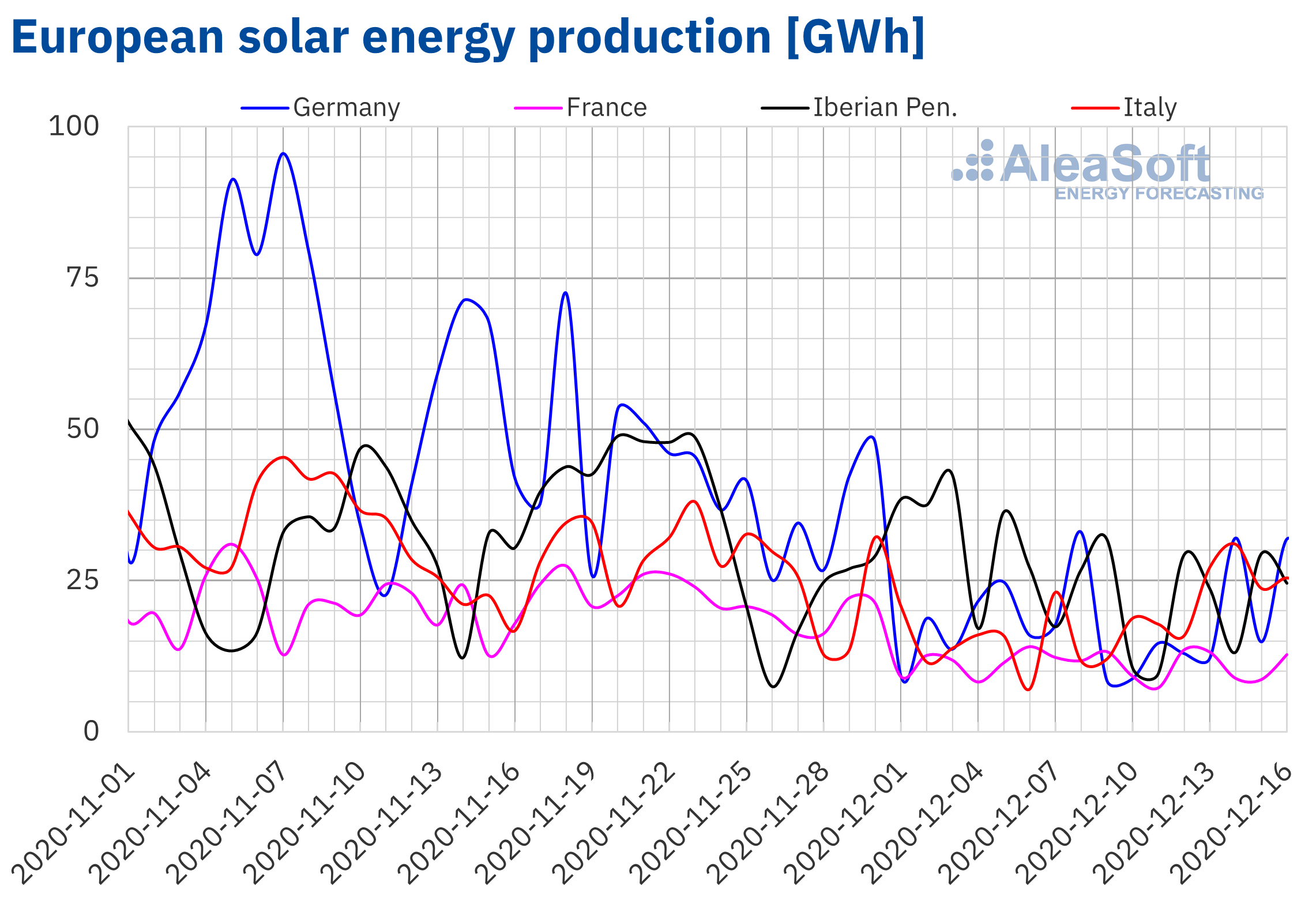 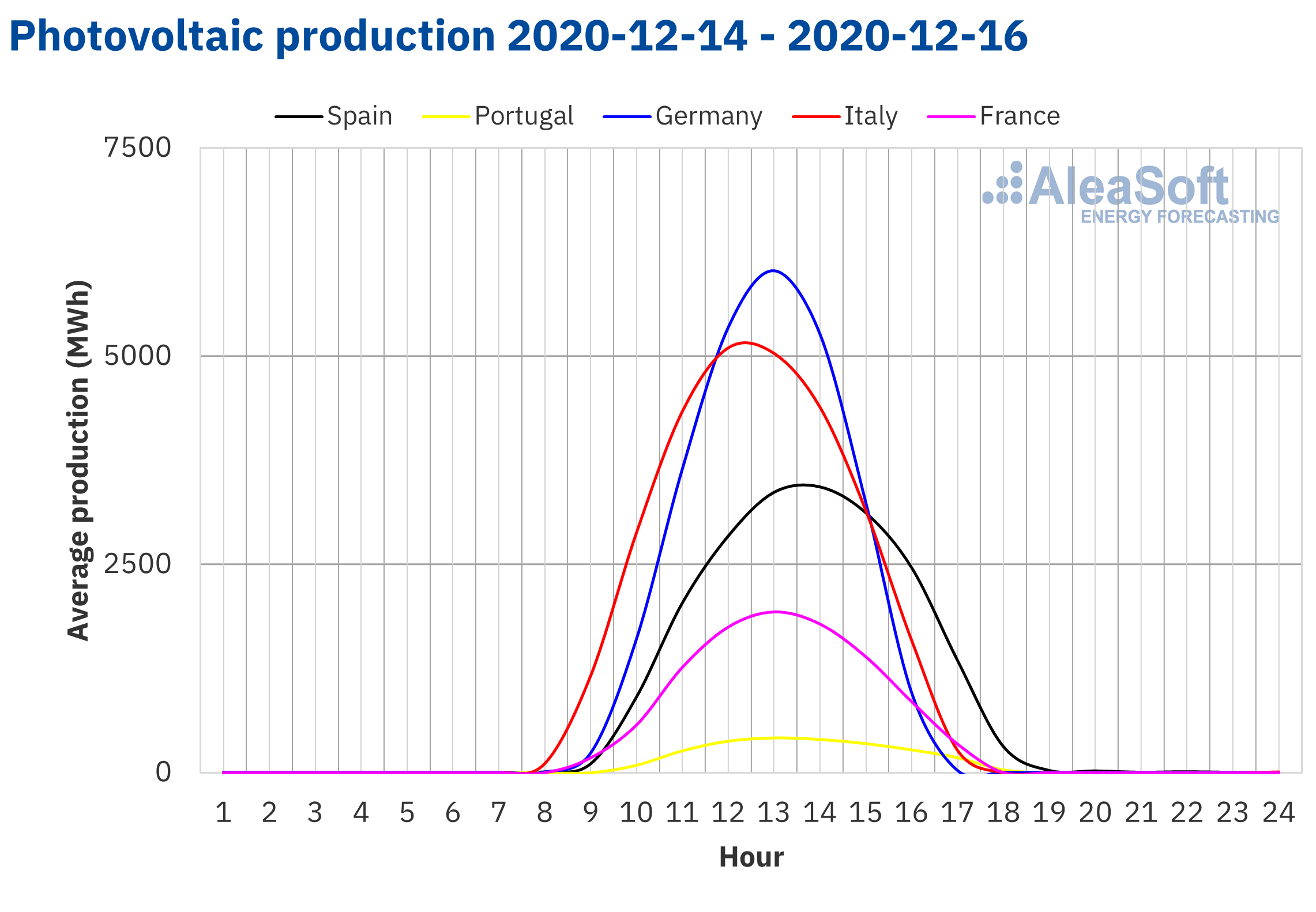 The wind energy production registered important increases in the first half of the week of December 14 in France and Germany, facilitating, together with the fall in demand, the decrease in prices in the electricity markets of the centre of the continent. The increase in production in Germany reached 73% while in France it was 32%.

In the south of the continent, by contrast, the wind energy production fell, with declines of around 40% in Italy and the Iberian Peninsula. 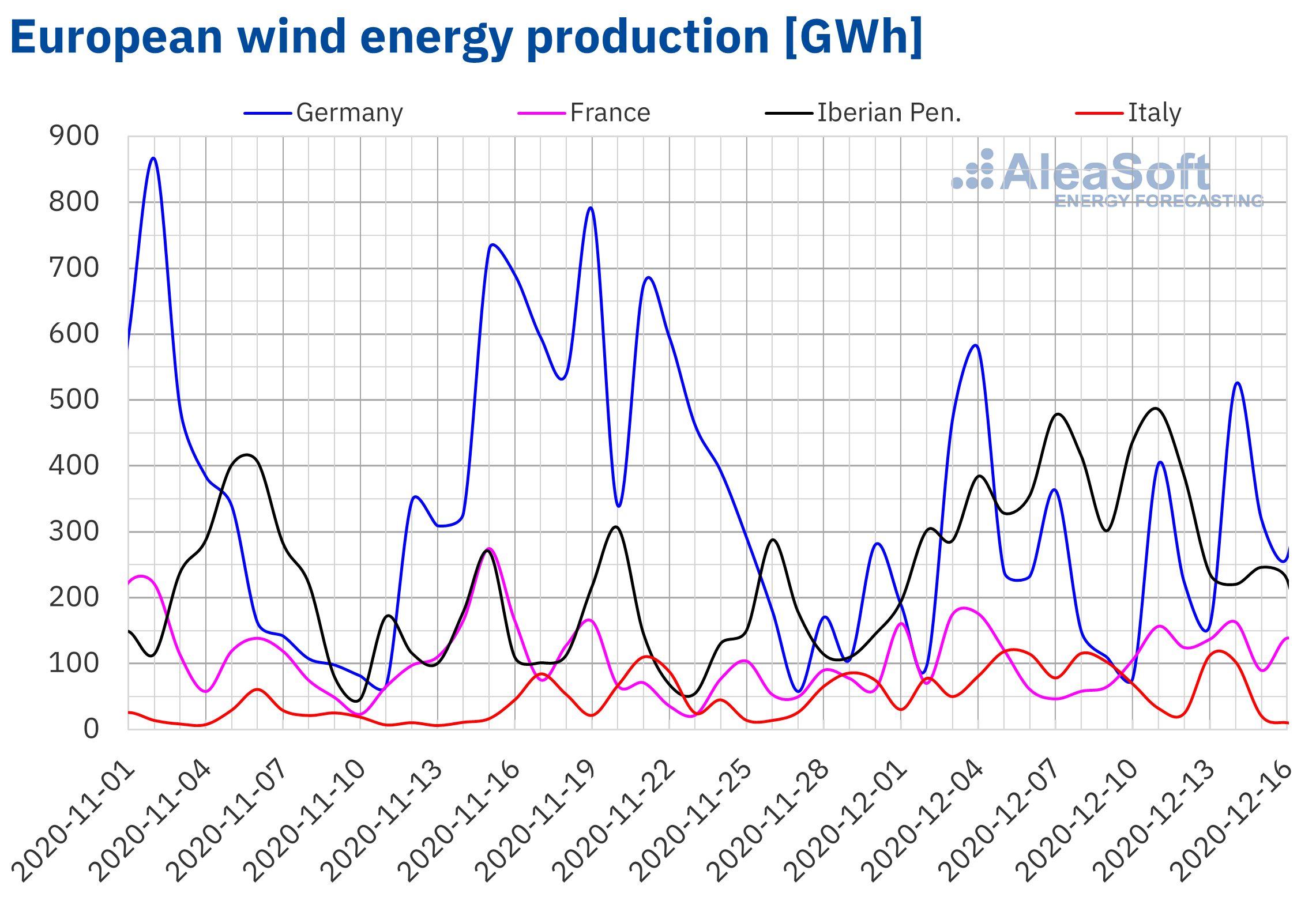 At AleaSoft, detailed analyses are carried out on the evolution of energy markets in Europe, as well as a wide variety of reports for the energy sector that provide a clear vision of the future of the European energy system, providing knowledge, intelligence and opportunities.

AleaSoft also organises webinars for the dissemination of useful information and knowledge to professionals in the sector. The next webinar will be held on January 14 and will feature the participation of speakers from the consulting firm PwC Spain, to analyse the status and vision of the PPA contract market for large consumers, its impacts and requirements, and the need for estimates of the future electricity market prices.