AleaSoft Energy Forecasting, August 22, 2022. Gas and CO2 prices increased during the third week of August and each one registered a new historical maximum on the 19th. This caused an increase in prices of around 30% in most European electricity markets. In the markets of France, Germany, Belgium and the Netherlands, the hourly prices reached €747.93/MWh during the evening peak of August 17, the highest value in decades for some of these markets.

During the week of August 15 to 21, the solar energy production increased by 21% in the Iberian Peninsula compared to the previous week. On the contrary, in the markets of Germany, France and Italy, the production fell between 33% and 10%. 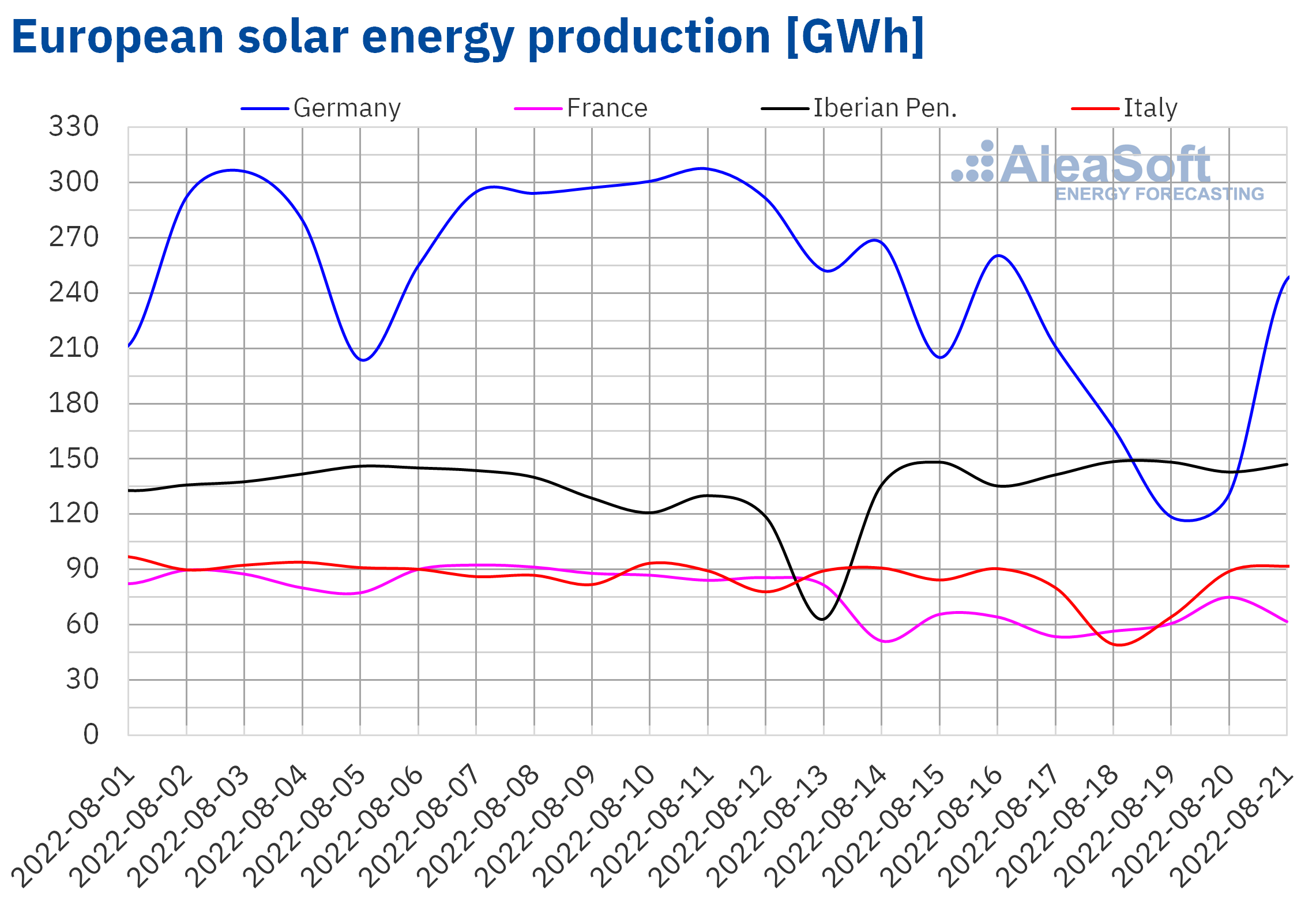 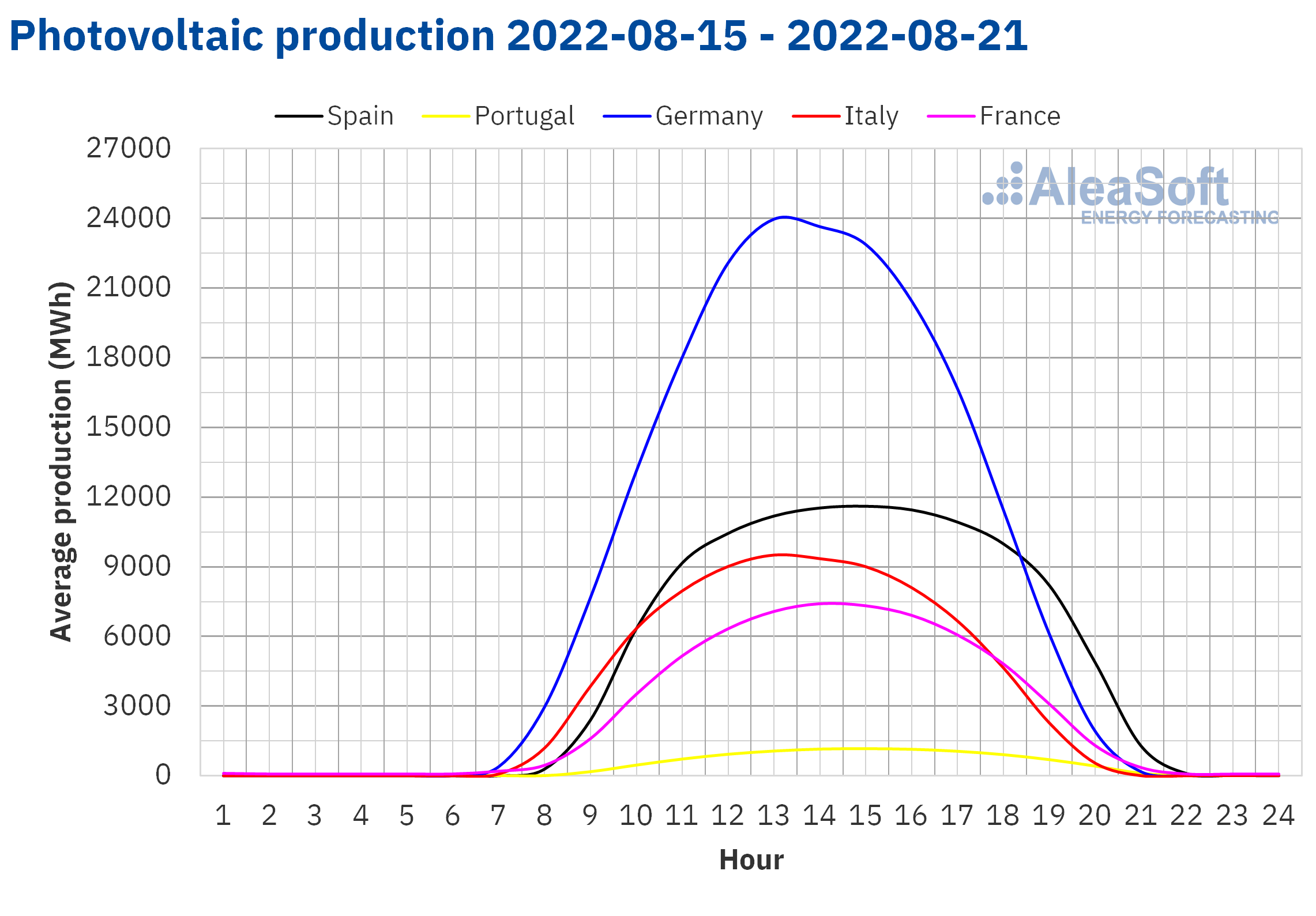 During the week of Monday, August 15, the wind energy production more than doubled in the Portuguese market compared to the previous week. In the markets of Spain and Italy the increases were 31% and 27%, respectively.

For the fourth week of August, the AleaSoft Energy Forecasting’s wind energy production forecasting indicates an increase in the German market while a decrease in production is expected in the markets of France, Portugal, Spain and Italy. 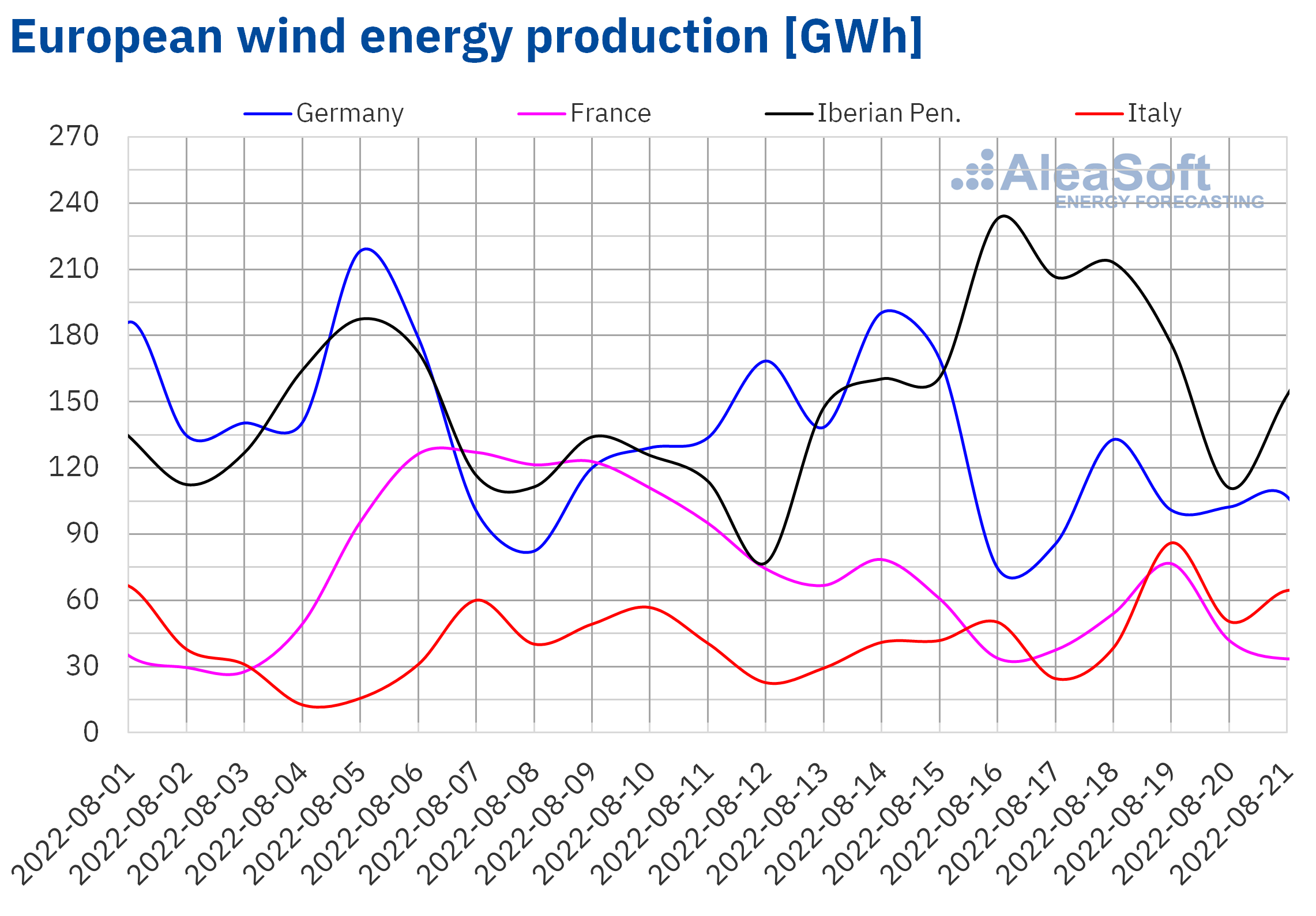 In the third week of August, the electricity demand decreased in most of the analysed European electricity markets with respect to the previous week, favoured by mostly less warm average temperatures and the Assumption of the Virgin holiday celebrated on August 15 in most countries. The decreases were between the 9.8% registered in Spain and the 0.2% of Great Britain. The only market where the demand increased in this period was that of the Netherlands, where the Assumption of the Virgin holiday is not celebrated. The increase registered in this case was 13%.

According to the demand forecasting made by AleaSoft Energy Forecasting, it is expected that in the fourth week of August the demand will be higher than that of the previous week in most markets, except for Great Britain and the Netherlands. 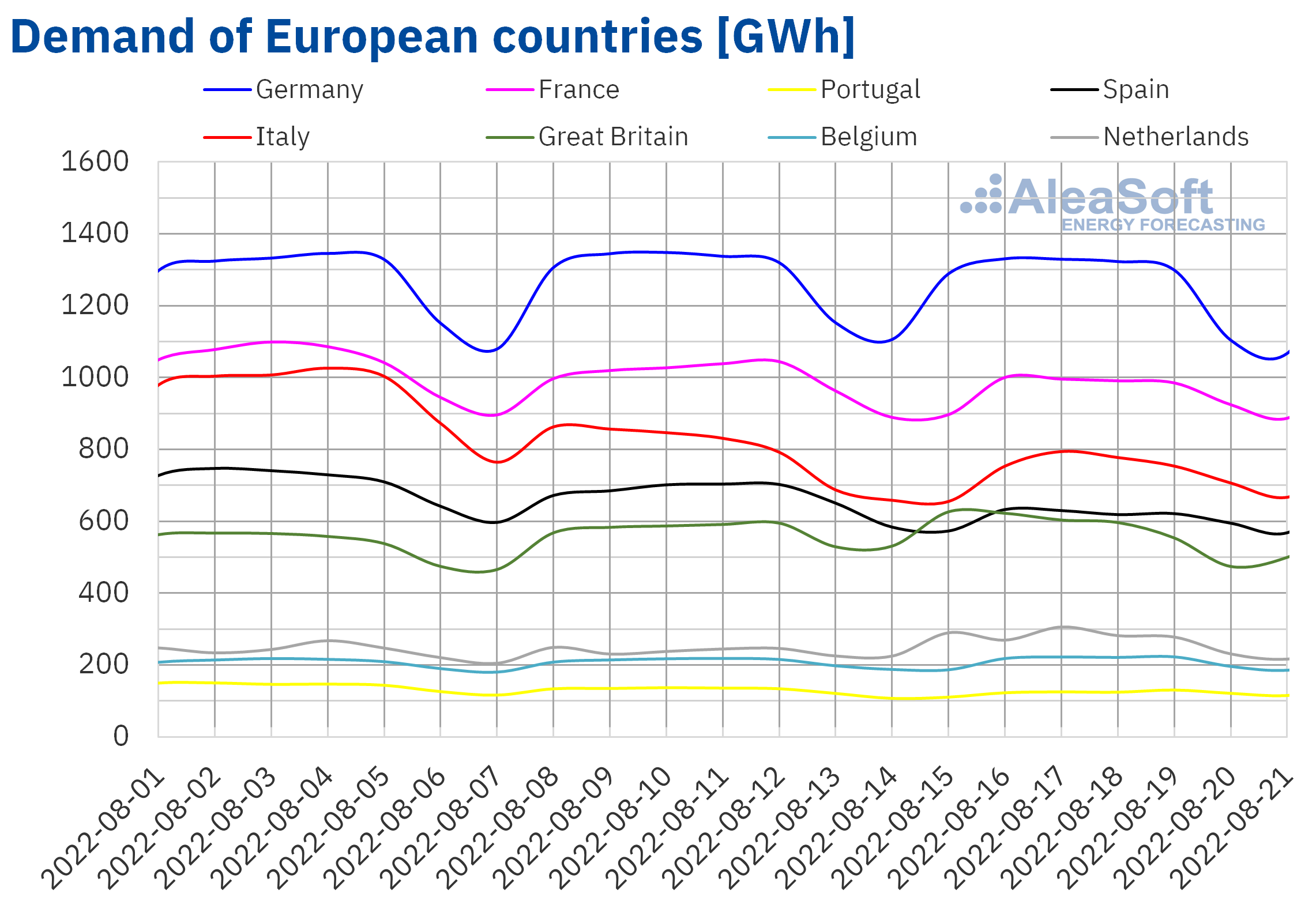 The rise in gas prices in the last week caused very significant increases in European electricity markets prices. The price increases in the week of August 15 were around 30%, with the EPEX SPOT market of Germany leading with a 32% increase, closely followed by the Nord Pool market of the Nordic countries. The rise in the French market stood at 30%, followed by the market of the Netherlands with an increase of 29%, the Belgian market with 28% and the British N2EX market with 24%.

The IPEX market of Italy registered a more moderate increase, of 9.7%, since the previous week, that of August 8, Italy registered much higher prices than the rest of the markets. In this week, the Italian market continued with the highest average price, with €502.37/MWh. In the rest of the markets, the average price in the week of August 15 was between €486.17/MWh of France and €437.20/MWh of Great Britain. In the lowest part, as usual, is the Nordic market with a weekly average of €236.27/MWh.

As for hourly prices, the weekly maximums were registered during the evening peak of the 17th, when four markets, France, Germany, Belgium and the Netherlands, reached €747.93/MWh. This price represents the highest value in decades for some of these markets. In the third week of August negative prices were not registered.

A completely separate case is that of the MIBEL market of Spain and Portugal, where a cap is applied to the gas price for power generation plants. With this limitation on the gas price, currently at €40/MWh of gas, the Iberian electricity market did not notice the increase in prices of the fossil fuel. In fact, prices fell by 3.5% in Spain and 2.5% in Portugal in the third week of August, with weekly averages of €144.01/MWh and €145.72/MWh, respectively, very far from the prices of the rest of the markets. The adjustment price that consumers with indexed rates must pay as compensation to gas plants fell by 20%, as a result of a 45% drop in combined cycle gas turbines generation due to greater renewable energy generation and lower demand.

Both markets, Spain and Portugal, registered the lowest hourly prices of the week among all analysed markets. Between 17:00 and 18:00 of Sunday, August 21, the Iberian market price fell to €25.09/MWh, the lowest price in this market since May.

If gas prices continue to rise, the AleaSoft Energy Forecasting’s markets prices forecasting indicates that during the week of August 22, prices will continue their upward trend. 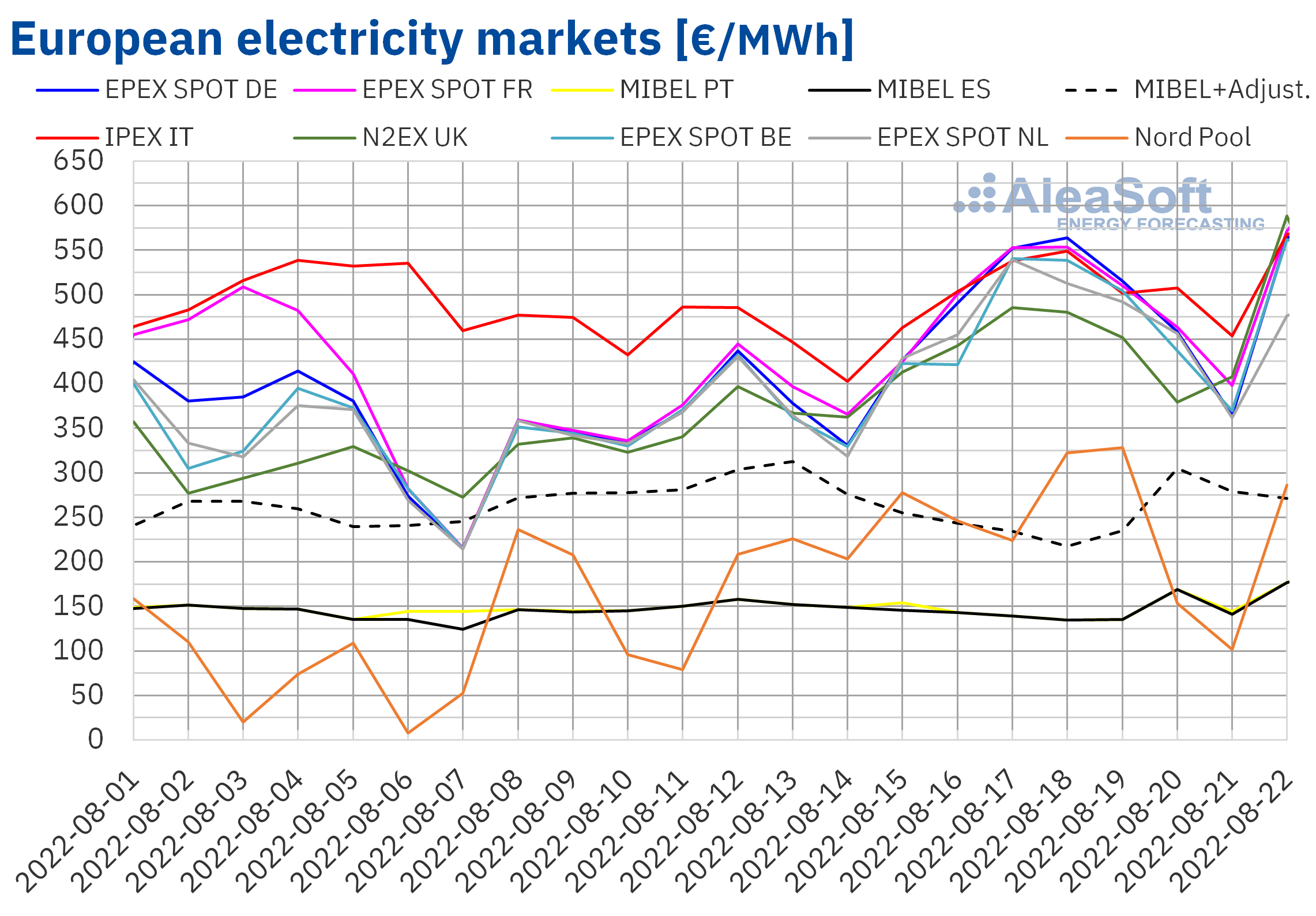 On Friday of the third week of August, the 19th, the electricity futures prices for the next quarter increased in general in the markets analysed at AleaSoft Energy Forecasting compared to the previous Friday. The largest increases were registered in the EEX market of Spain, the OMIP market of Spain and Portugal, and the ICE market of Belgium and the Netherlands, where they increased by nearly 25%. In the rest of the analysed markets, the increase was between 8.4% and 23%. The futures prices in France stand out, which for the winter months already exceeded €1300/MWh.

The electricity futures prices for the year 2023 also registered a general upward trend. The largest increases were 25% in the ICE markets of Belgium and the Netherlands. In the rest of the analysed markets, the increases were between 12% and 21%.

During the week of August 15 to 19, Brent oil Front‑Month futures registered an average settlement price of $94.88/bbl. This figure represents a decrease of 2.8% compared to the average price of the previous week. The minimum value of the week was reached in the market session of Tuesday 16, when the settlement price was $92.34/bbl.

This drop in Brent prices is strongly associated with fears of a possible economic recession, particularly in China and the United States, after the communication by the International Monetary Fund in which it is warned that the world economy faces an increasingly gloomy and uncertain outlook as the world’s three major economies (China, United States and Europe) show signs of stagnation amid consequences of the war in Ukraine.

As for TTF gas futures in the ICE market for the Front‑Month, the average value registered during the analysed period was €231.48/MWh. Compared to that of the Front‑Month futures traded in the previous week, of €200.96/MWh, the average increased by 15%. A historical maximum was reached on Friday, August 19, with a settlement price of €244.55/MWh, above €227/MWh reached on March 7 shortly after the start of the war in Ukraine.

This price came after the announcement by the Gazprom company that on next August 31 it will stop pumping gas to Germany through the Nord Stream gas pipeline for three days, due to the technical service of the only pumping station in operation.

Regarding CO2 emission rights futures in the EEX market, the reference contract of December 2022 reached an average price of €94.54/t last week, 9.4% higher than the average price of the week of August 8 to 12. The settlement price reached in the session of Friday, August 19, of €98.01/t, is the maximum in history to date, exceeding the maximum prices reached just before the start of the war in Ukraine. 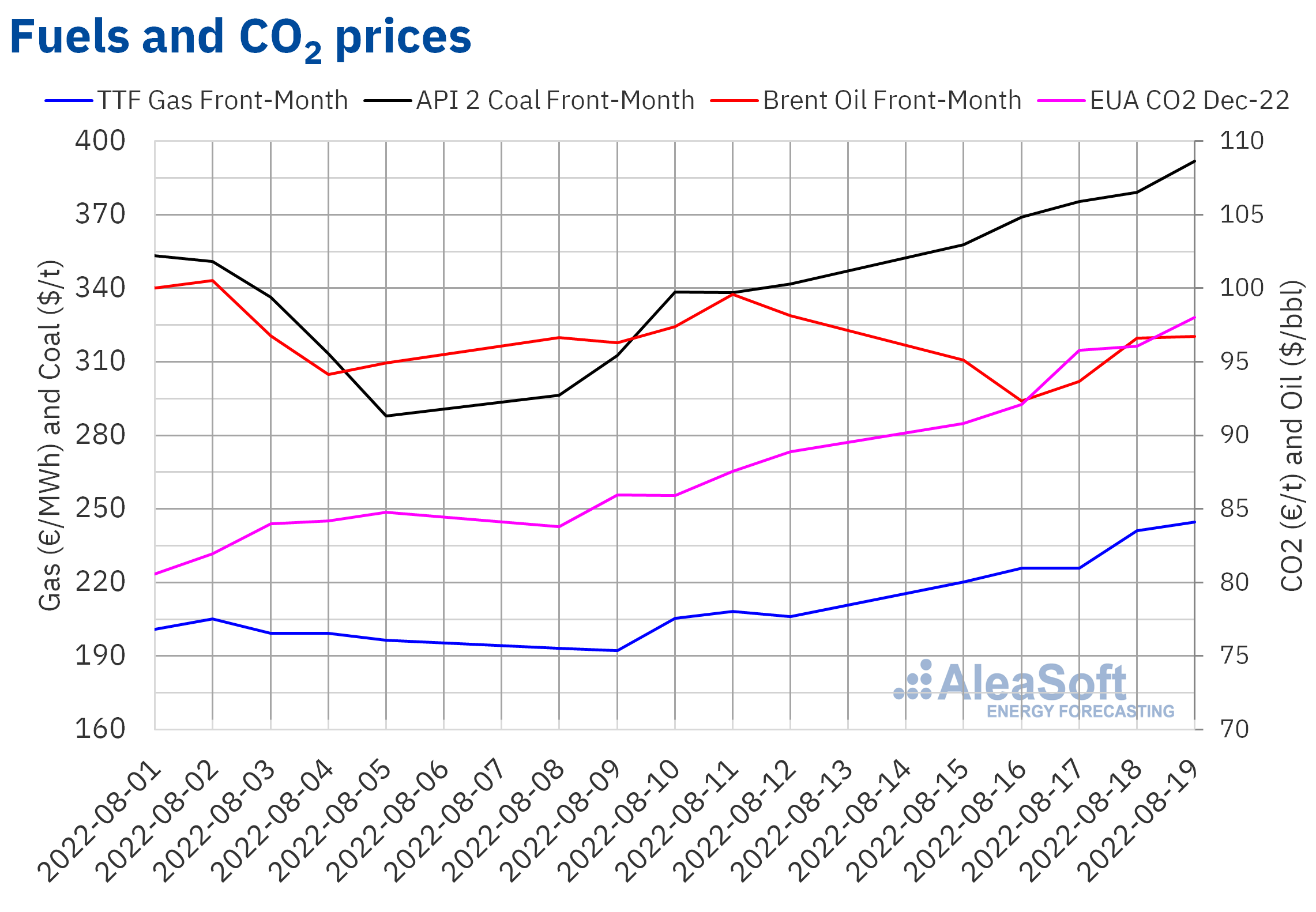 During the month of August, AleaSoft Energy Forecasting is offering special promotions for short-, mid- and long‑term price forecasting services for European electricity markets. The long‑term price forecasting is necessary in the renewable energy projects financing. Once the plant is in operation, short-, mid- and long‑term forecasts are essential to responsibly manage a diversified energy sales strategy with contracts and coverage over all time horizons.

At AleaSoft Energy Forecasting and AleaGreen the next two editions of the monthly webinars on current issues of the European energy sector are already being organised. The next edition will be held on September 15, with the participation of Jorge Simão, COO at OMIP and Pablo Villaplana, COO at OMIClear, who will analyse the importance of forward markets for the renewable energy development. In addition, Fernando Soto, Director‑General of AEGE, will participate in the analysis table of the Spanish version of the webinar, who will speak about the auction of renewable energy PPA with electro‑intensive consumers that the association he presides over is organising. The October edition will be held on the 20th, with once again speakers from Deloitte, Carlos Milans del Bosch, Partner of Financial Advisory and Luis Garcia Tasich, Manager of Global IFRS and Offerings Services, who will share their vision on the renewable energy projects financing and the importance of the forecasting in audits and portfolio valuation. As usual, Oriol Saltó i Bauzà, Associate Partner at AleaGreen and Antonio Delgado Rigal, CEO of AleaSoft Energy Forecasting will participate in both editions of the webinars.