AleaSoft, April 13, 2020. Last week the electricity demand of all European markets fell due to the decrease in the labour of Holy Week that was added to the effect of the measures to contain the coronavirus, in addition to the fact that the temperatures were less cold. Negative daily prices were registered on Easter Monday in some markets where this day was a public holiday and where the wind energy production was high. The OPEC+ agreed to cut the crude oil production to counter the drop in demand.

The solar energy production increased last week, which started on April 6, in most markets analysed at AleaSoft compared to the previous week. In the Italian and German markets the increases were 20% and 17% respectively. In Portugal there was an increase of 5.8% while in Spain the production with this technology decreased by 4.1%.

In the year‑on‑year analysis, the solar energy production during the month of April of this year, between days 1 and 12, continues to be higher than that of April 2019 in most European markets. The 75% increase registered in Italy stands out, while in Germany it was close to 45%. The exception was the Portuguese market with a variation in its monthly production of ‑5.2%. Despite the year‑on‑year drop in Portugal, the production on the Iberian Peninsula was 35% higher thanks to the increase of close to 38% registered in Spain.

The AleaSoft‘s solar energy production forecasting indicates a decrease for this week in Spain, Germany and Italy compared to last week. 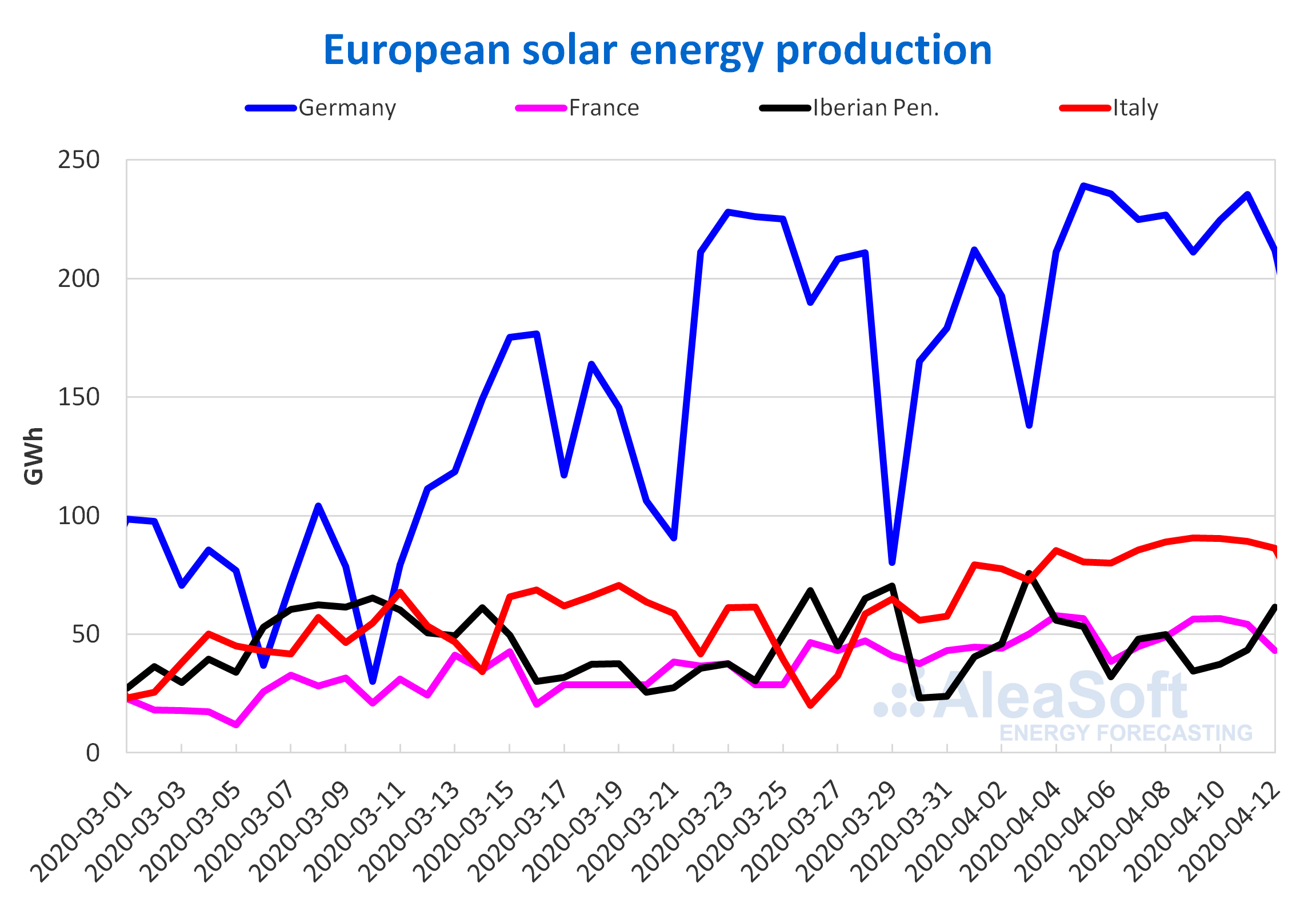 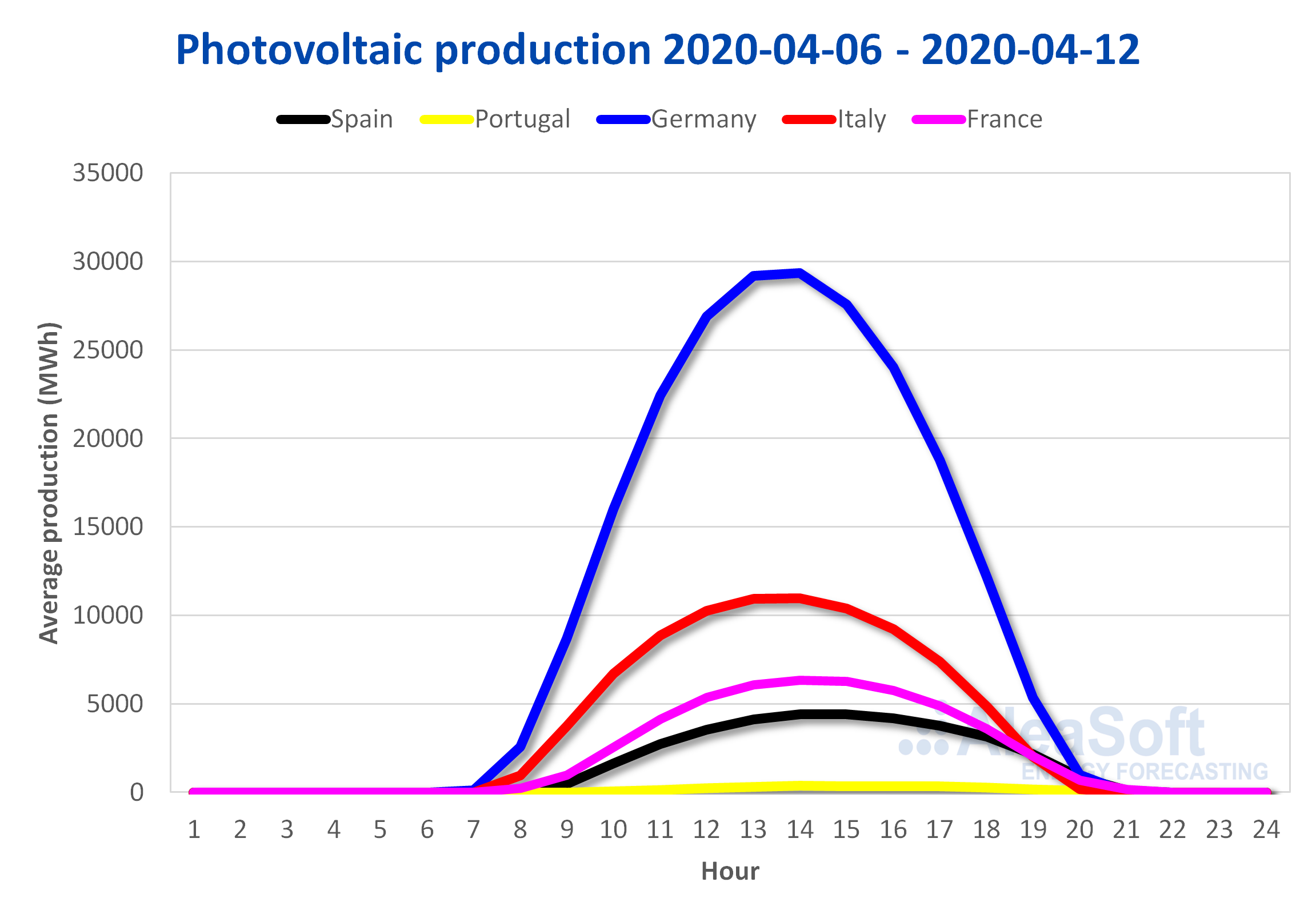 So far in April, until yesterday the 12th, there was also a decrease in wind energy production compared to the same period in 2019 in most European markets. The cases that stand out the most are those of the Iberian Peninsula and Italy, which decreased by 39% and 16% respectively. By contrast in Germany it increased by 5.4%.

For this week the AleaSoft‘s wind energy production forecasting indicates a general increase in the main European markets, compared to last week. 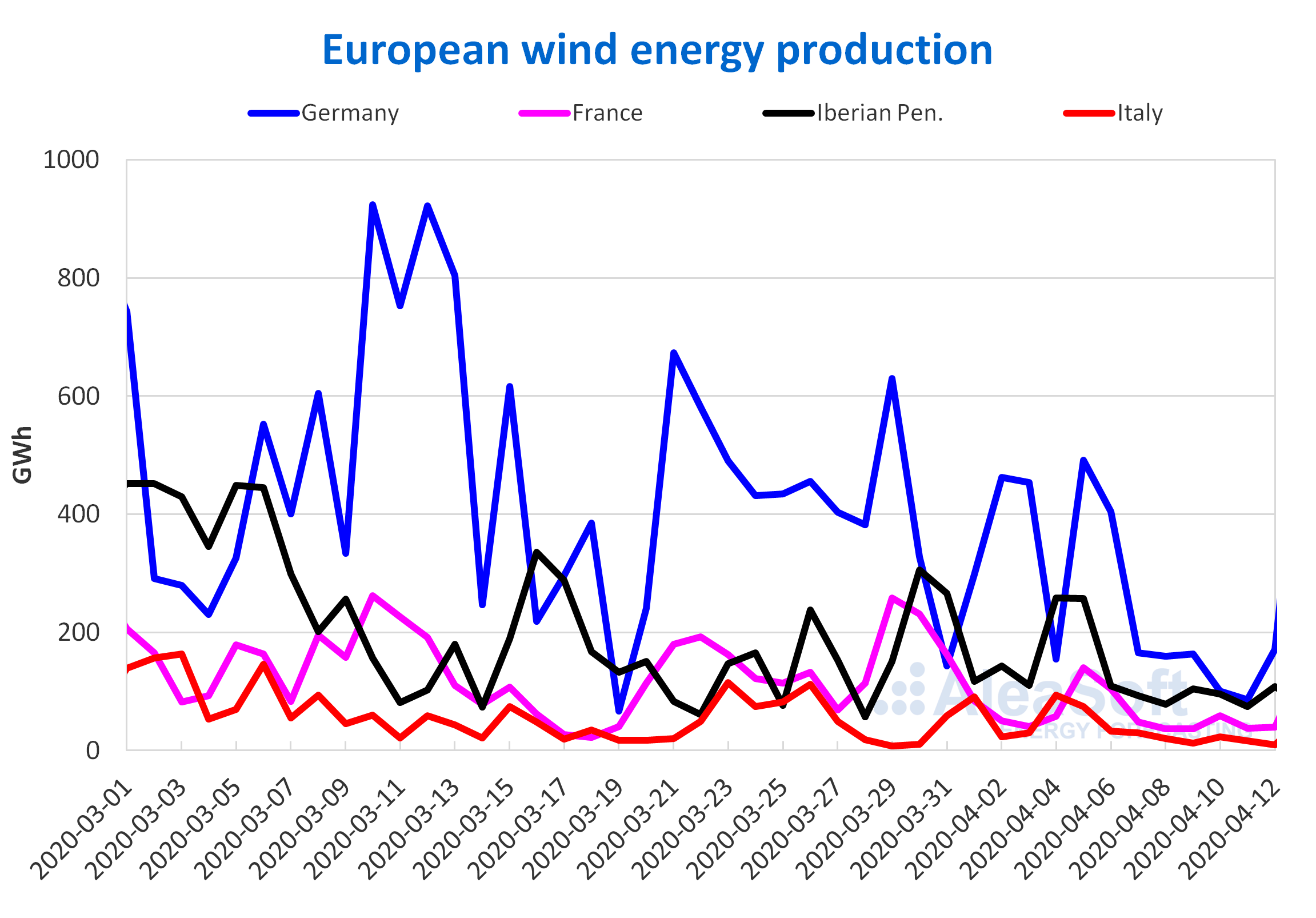 As every year, the electricity demand during the Holy Week fell significantly compared to the previous week in all European markets, due to the effect of the public holidays and the decrease in labour, which this year are joined to the measures taken to stop the coronavirus. In addition, the average temperatures during the Holy Week were less cold than those of the previous week throughout the continent, this being another factor that favoured the decrease in demand. The decreases were more noticeable in France, Great Britain and Portugal, which were 18%, 13% and 12% respectively. The increase in average temperatures in Germany, of 7.7 °C, contributed to the 10% drop in demand. On the other hand, Italy registered the smallest drop among the analysed markets, which was 2.0%. In the case of Spain, the decrease was 7.8%, while in Belgium and the Netherlands the demand fell by 6.6% and 4.9% respectively.

Even though the electricity demand was decreasing for several weeks due to confinement measures because of the new coronavirus, and that in cases such as Spain, the electricity demand fell to levels seen more than 15 years ago, this Holy Week there were decreases again. In fact, the demand had greater week‑on‑week variations than those registered in 2019 in almost all European markets. The exceptions were the markets of Spain and Italy, where the decreases were less than those of the week from April 15 to 21, 2019. It coincides that in these two cases, for several weeks, very restrictive measures were taken that significantly decreased the labour. 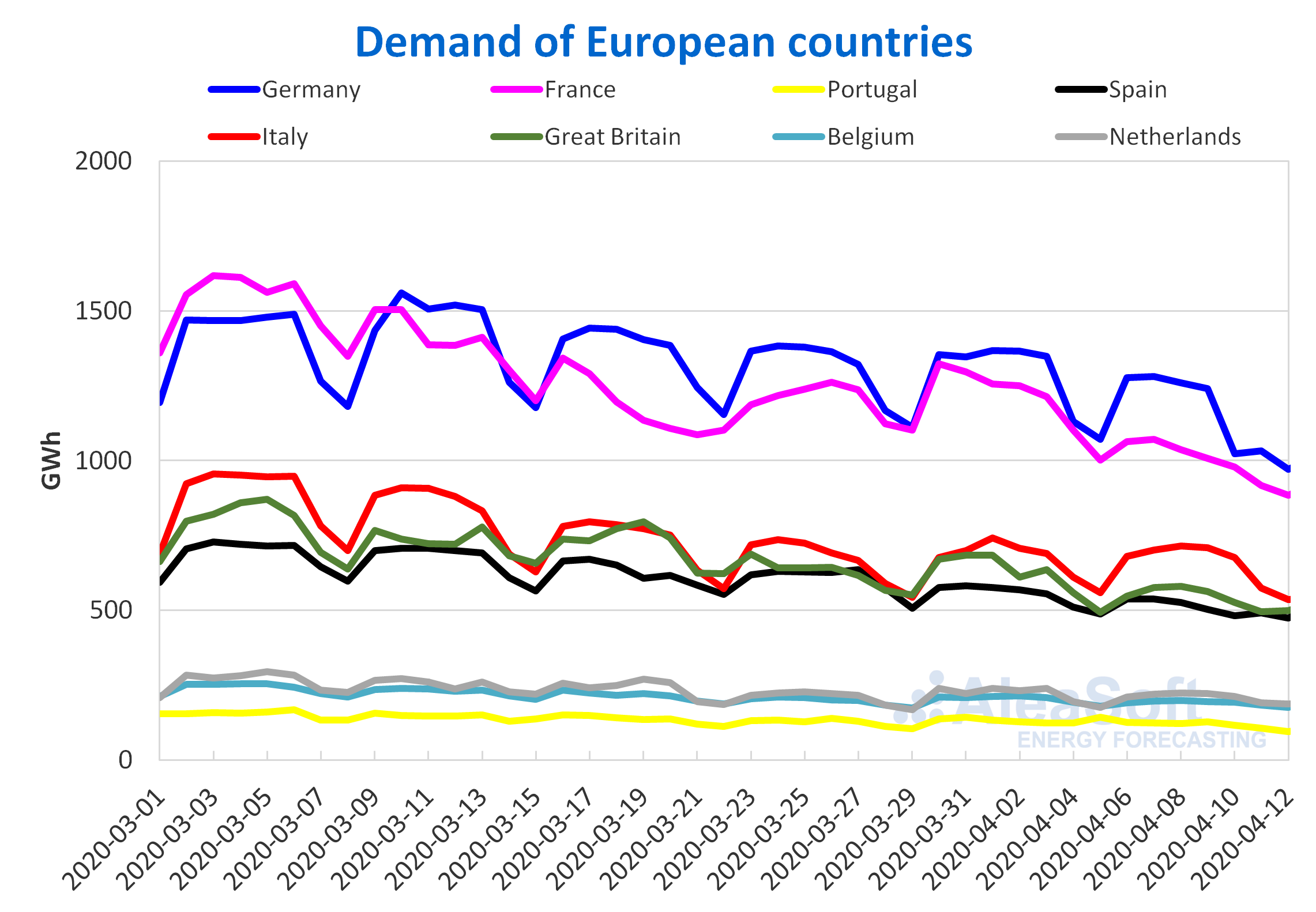 At the AleaSoft’s demand observatories the individual behaviour of the electricity demand in the European electricity markets can be analysed.

For this week of April 13, the AleaSoft’s demand forecasting indicates that, in general, the demand will be higher than that of the Holy Week, but that in most cases it will continue to be lower than that of the week of March 30.

Last week the behaviour of the prices was very different depending on the market. The markets in which the largest price falls were registered compared to the previous week were the EPEX SPOT market of France, the Nord Pool market of the Nordic countries and the EPEX SPOT market of Belgium, with decreases of 24%, 15% and 8.3%, respectively. In contrast, the largest increases were those of the N2EX market of Great Britain and the MIBEL market of Portugal and Spain, of 11%, 11% and 10% respectively.

The market with the lowest average price of last week was once again the Nord Pool market, with a price of €4.59/MWh, while the market with the highest average price, of €31.98/MWh, was the N2EX of Great Britain again. The prices in the rest of the markets were between €14.43/MWh in the EPEX SPOT market of France and €25.05/MWh in the IPEX market of Italy.

Today, Monday, April 13, the prices decreased compared to those of yesterday in all European markets, except in the MIBEL market, where they increased coinciding with the return to work in the non‑essential activities in some regions of Spain. In the case of the EPEX SPOT markets of Belgium, Germany, Switzerland, France and the Netherlands, negative daily average prices of ‑€17.95/MWh, of ‑€15.97/MWh, of ‑€6.95/MWh, ‑€6.51/MWh and ‑€5.45/MWh respectively were registered.

The registered negative prices are related, on the one hand, to a low demand due to the fact that today, Easter Monday, is a national holiday in these countries, except in Switzerland, where it is a regional holiday, something that adds to the low demand related to the measures taken to stop the COVID‑19. On the other hand, the wind energy production was high. 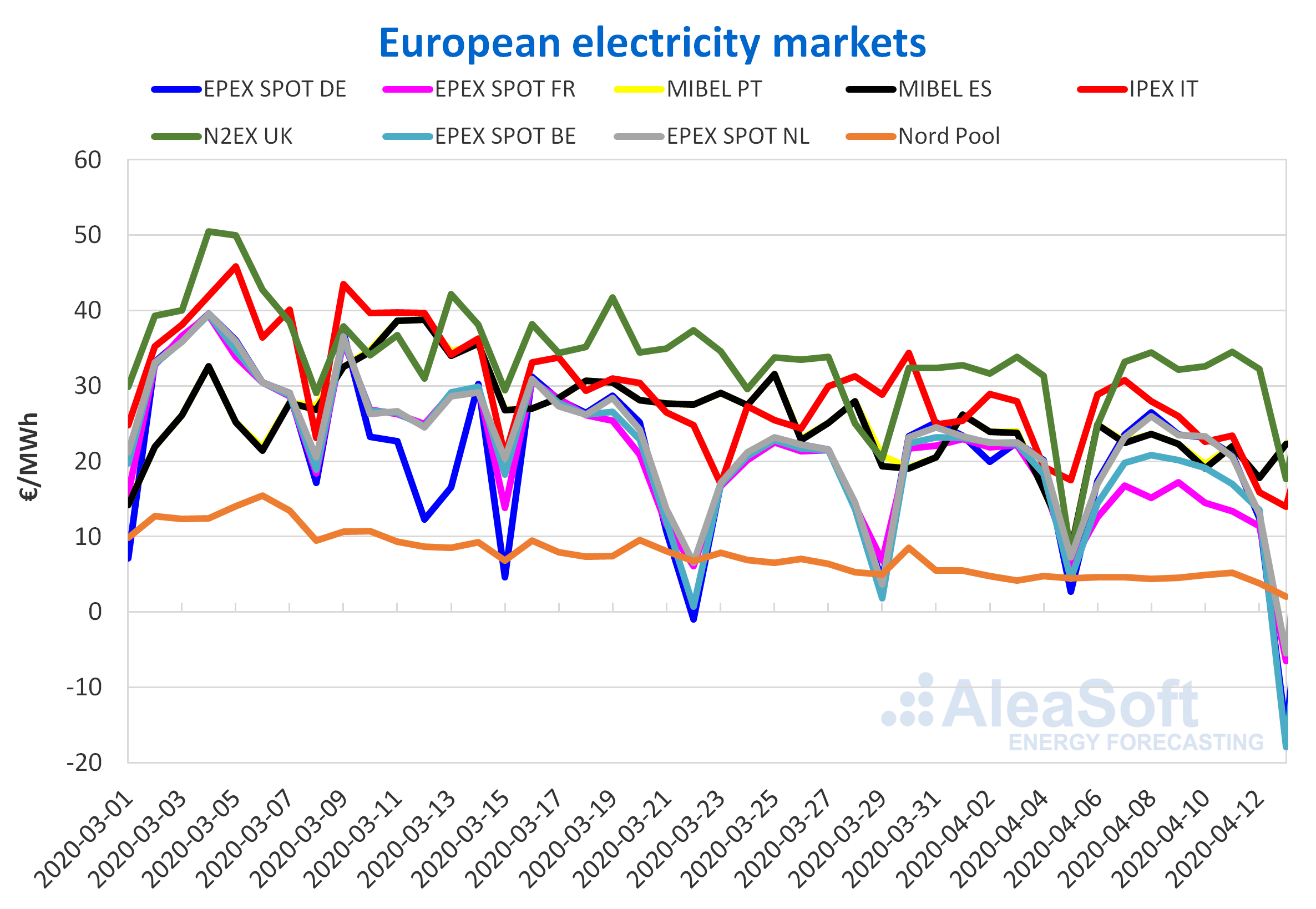 The AleaSoft price forecasting indicates that this week the prices in most European electricity markets will decrease compared to those of last week due to a higher wind energy production and the low gas prices.

At the end of last week, the prices of the electricity futures for the product of the next quarter registered a significant recovery in all the European markets analysed by AleaSoft when compared with those of Friday of the previous week, April 3. The NASDAQ market of the Nordic countries registered the highest rise in relative terms of 22%. On the other hand, the futures of Great Britain, both in the EEX market and in the ICE market registered the least pronounced rise with increases of 6.0% and 6.2% respectively. In the rest of the markets the increases between the settlements of the first two weeks of April were between 9.3% and 15%.

In the case of the electricity futures prices for the year 2021 something very similar happened. Increases were registered in all the analysed markets with respect to the session on April 3, led by the Nordic countries, both in the NASDAQ market and in the ICE market with increases of 17% in each case. The EEX market of France was the one with the lowest price increase for this product, with 5.1%.

The Brent oil futures prices for the month of June 2020 in the ICE market last week remained above $30/bbl. The maximum settlement price for the week, of $33.05/bbl, was that of Monday, April 6. On April 8, with a settlement price of $32.84/bbl, the highest increase was registered compared to the same day the previous week, of 33%.

The evolution of prices of last week was influenced by the expectations regarding the possibility that the OPEC+ members agreed to further cuts in production.

Finally, yesterday, Sunday, April 12, the OPEC+ members managed to agree on a reduction in production, to which additional cuts will be added by countries such as Saudi Arabia, the United Arab Emirates and Kuwait. On the other hand, the G20 energy ministers also agreed to reduce their production on Friday, April 10, although without specifying the amount. The cuts in their entirety could reach 20% of world demand.

The reductions in OPEC+ production will begin in May. The largest cuts will occur in the months of May and June, although they will continue until April 2022. However, in the coming weeks, before such cuts begin, the demand is expected to remain low due to the measures taken to fight against the COVID‑19 pandemic, so rapid price increases are not expected in April. In fact today, although prices above $33/bbl were reached at the beginning of the session, later they were below $32/bbl most of the time.

The TTF gas futures prices in the ICE market for the month of May 2020 during the past week were stable at around €7.28/MWh. The settlement prices ranged from €7.26/MWh on Wednesday, April 8, to €7.29/MWh on Monday, April 6. These prices were 5.7% higher, on average, than those of the previous week.

Regarding the TTF gas in the spot market, the first days of last week, the prices rose to €7.43/MWh of Wednesday, April 8, which is the highest price since March 27. Then the price dropped again, leaving an index price of €6.90/MWh for Good Friday, the weekend and today Easter Monday.

Regarding the CO2 emission rights futures in the EEX market for the reference contract of December 2020, last week the settlement prices were above €20/t. Prices as high as these were not registered since the first half of March. The settlement price of Wednesday, April 8, of €21.14/t, was the highest of the week and 24% higher than that of the previous Wednesday. This behaviour is related to the optimism generated by the improvement in the evolution of the COVID‑19 epidemic in Italy and Spain. 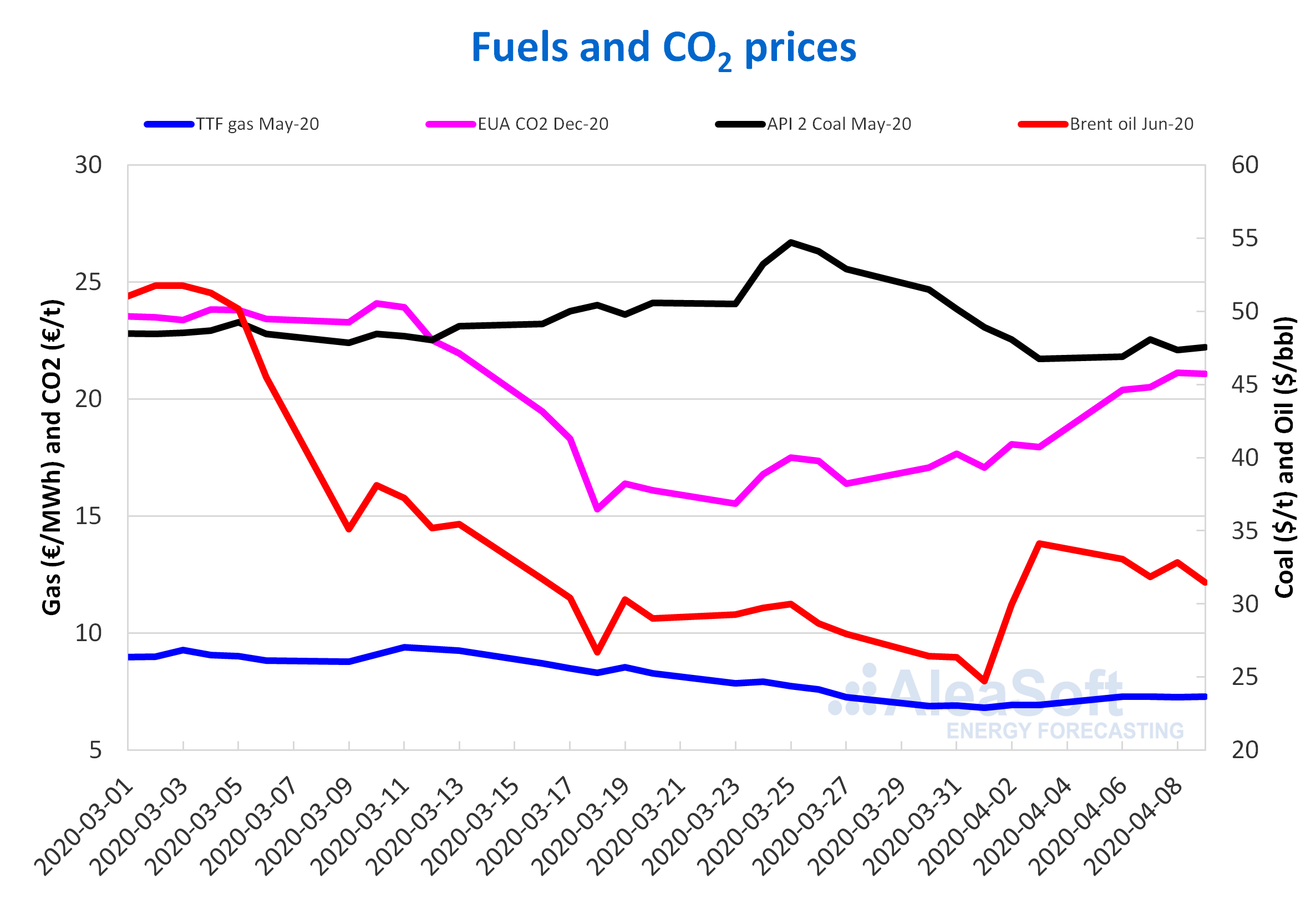