AleaSoft, April 19, 2021. The price escalation in the main electricity spot and futures markets in Europe will bring absolute record prices for the month of April, as in Spain, and record prices for several years in others such as Germany, France and Italy. The upward trend in CO2 prices, also in gas prices, the low temperatures and the moderate wind energy production are among the combination of factors that led to this “perfect storm”.

The solar energy production continues its seasonal upward trend as the hours of sunshine and the solar irradiation increase. During the third week of April, from the 12th to the 18th, the solar energy production increased in the main European markets analysed at AleaSoft with values around 12% higher compared to the previous week. The markets that moved away from this behaviour were the Portuguese market, with a slight increase of 0.2%, and the Italian market, where the production fell by 11%.

Looking ahead to the fourth week of April, the AleaSoft‘s forecasting indicates a drop in production in the south of the continent, in the Iberian and Italian peninsulas, while in latitudes further north, the production might continue to rise. 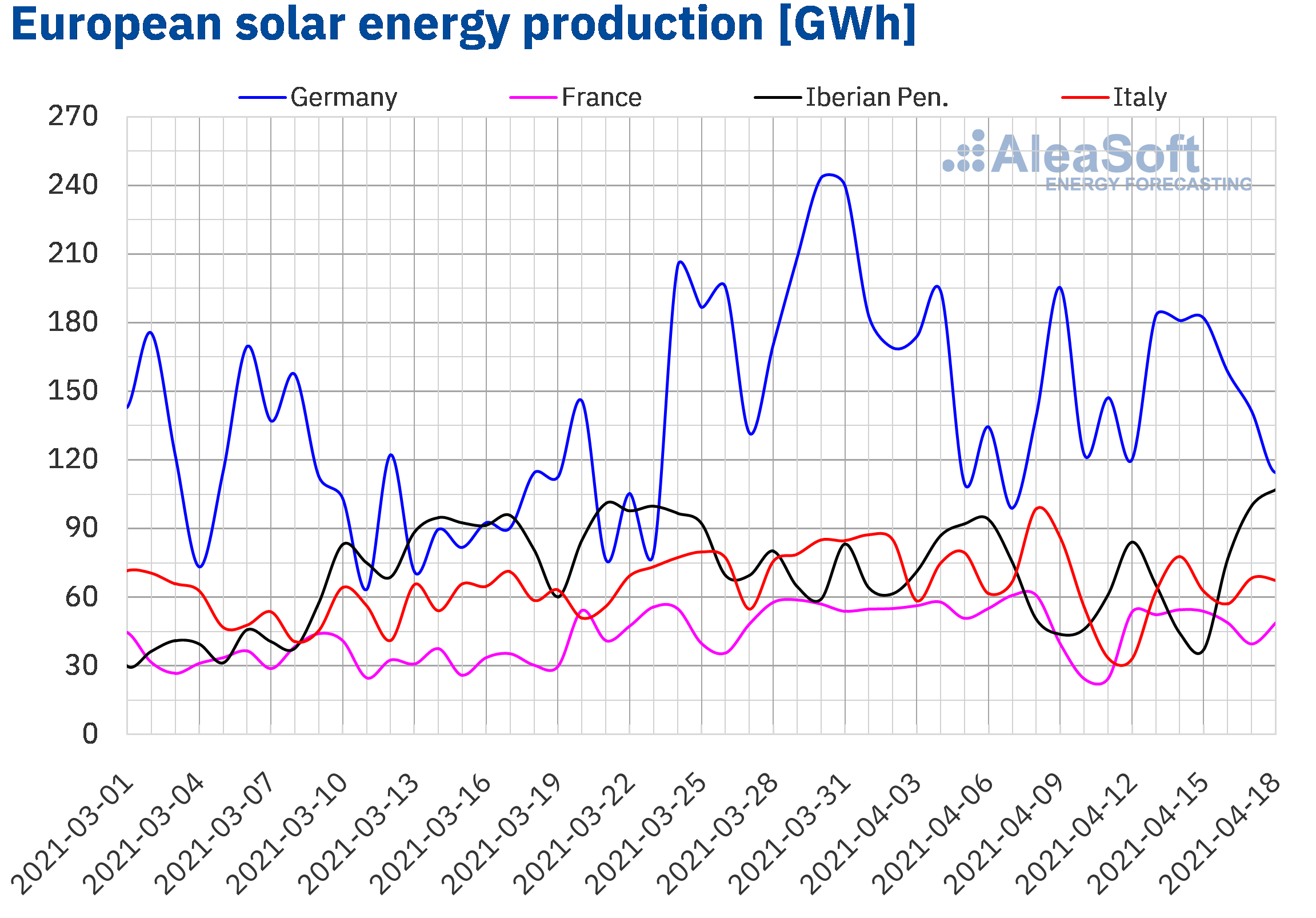 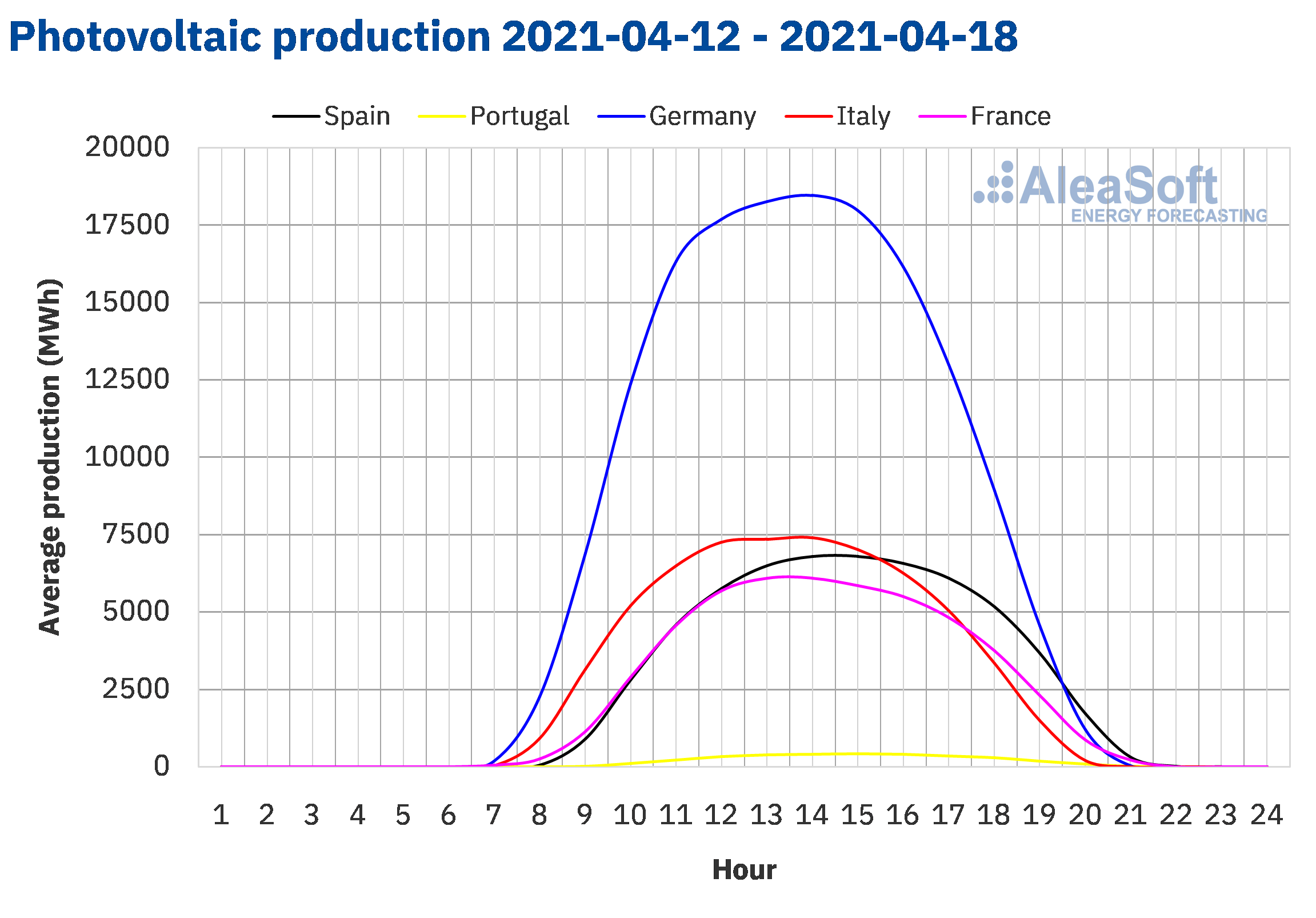 For this week of April 19, the AleaSoft‘s forecasting points to a decrease in wind energy production on the continent, but Germany may recover from the low levels of the previous week. 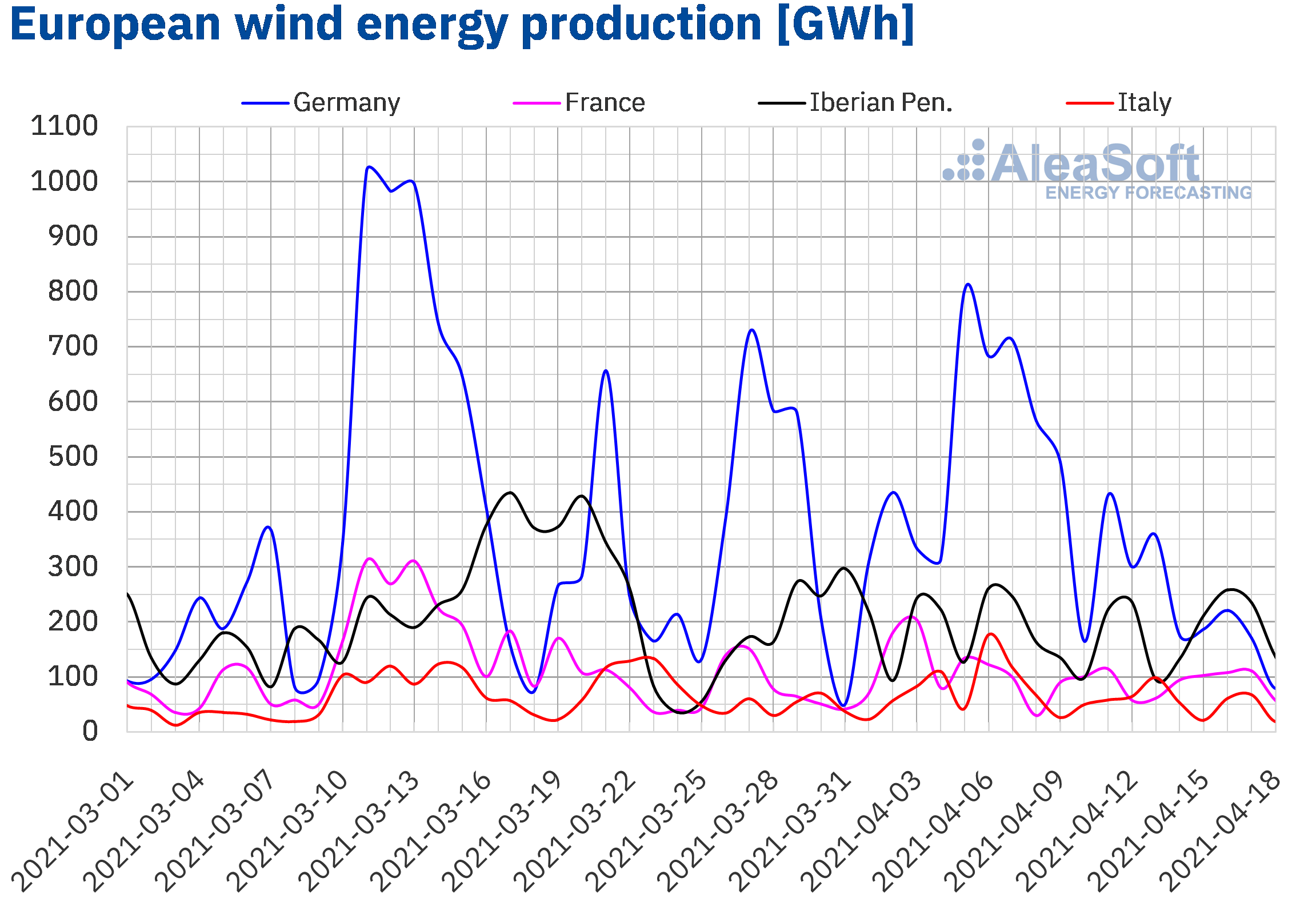 In the week of April 12, the weekly increase in electricity demand continued in all electricity markets of Europe. The exceptions were the declines in Belgium and the Netherlands. The markets of Italy and Germany registered the largest increases, which were above 4.0%. The increases were of the order of 3.0% in the rest of the markets.

For the week of April 19, the AleaSoft‘s demand forecasting indicates that the demand will drop in most European markets, due to the general rise in average temperatures. 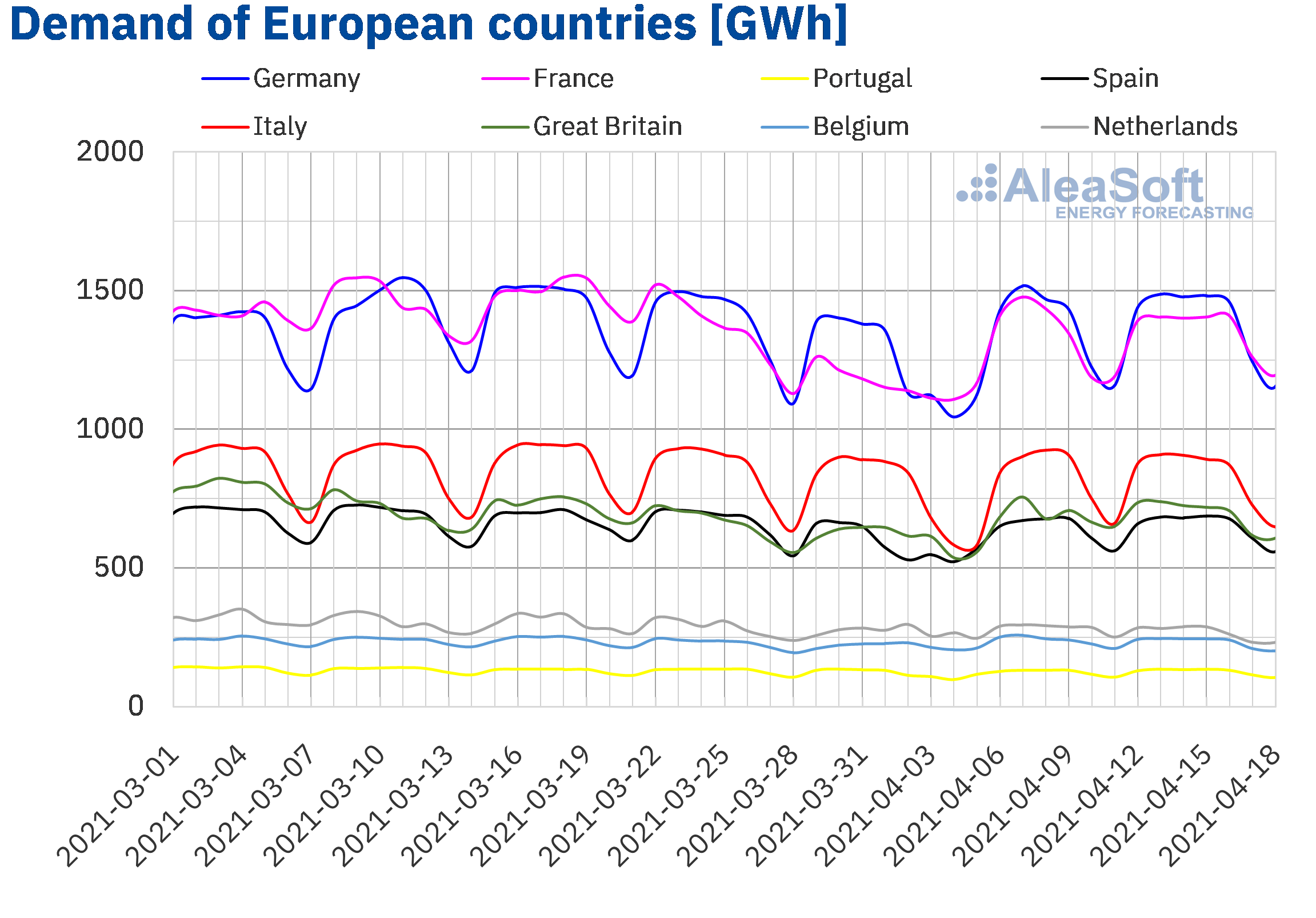 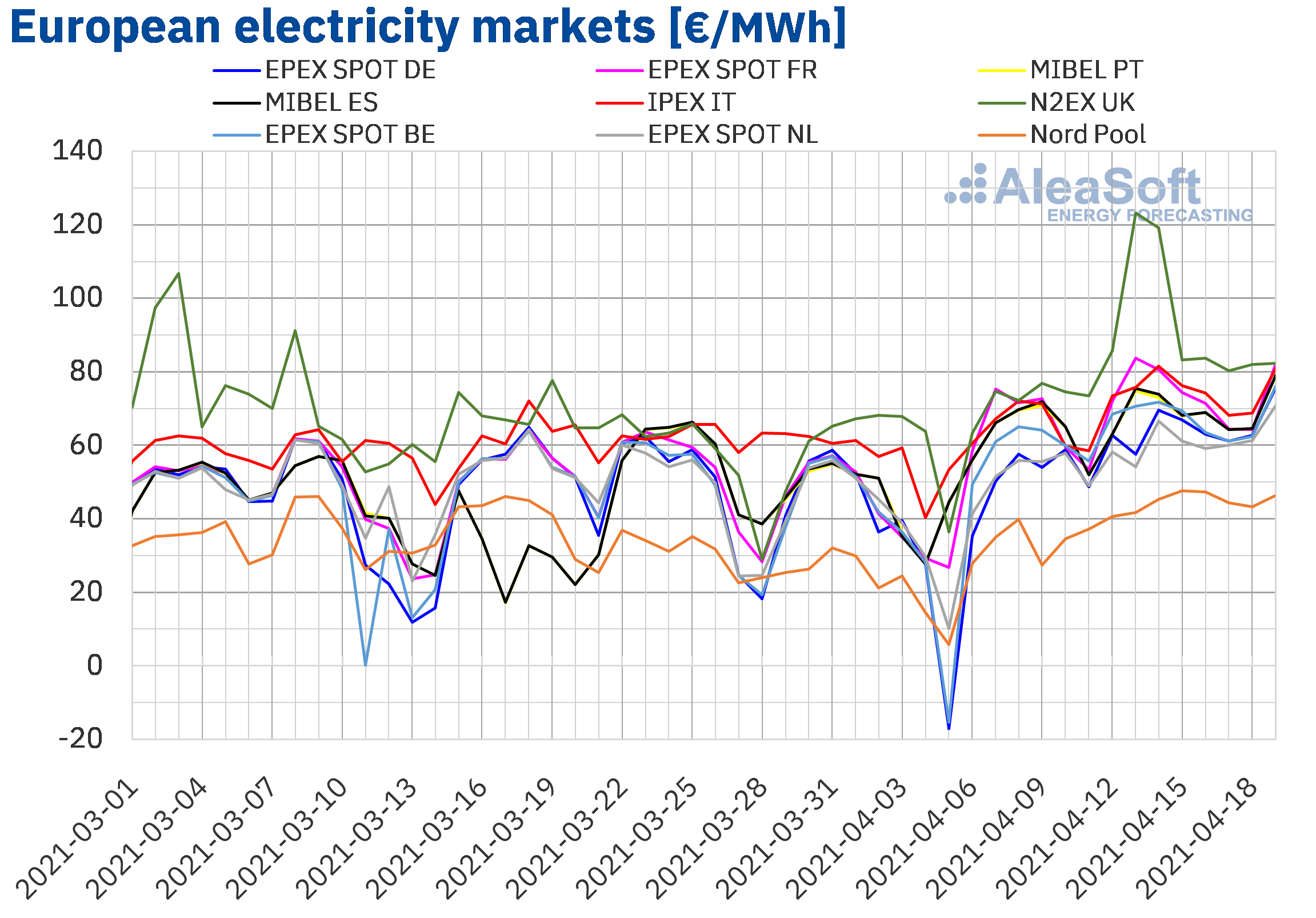 During the third week of April, the increase in demand compared to the previous week, favoured by the drop in temperatures in most Europe, and the decrease in wind energy production in countries such as Germany, France and Italy favoured the price increases in the European electricity markets. The increase in gas and CO2 emission rights prices also contributed to these increases. In the case of Italy, the solar energy production also fell, reaching one of the highest average prices of the week of April 12 in this market.

The AleaSoft‘s price forecasting indicates that the week of April 19, the prices could fall in the German, Belgian, British and French markets, favoured by the decrease in demand in these markets and the recovery of the wind energy production in Germany. However, the decline in wind and solar energy production in the Iberian Peninsula will favour that the prices continue increasing in the MIBEL market.

During the third week of April, that of Monday the 12th, the prices for the next quarter rose in all the European electricity markets analysed at AleaSoft. The ICE market of the United Kingdom was the one with the highest increase with a 6.6% rise. It is closely followed by the EEX market also of the United Kingdom with 6.5%. On the other hand, the NASDAQ market of the Nordic countries was the one with the lowest variation, with a rise of 3.7%.

Regarding the prices of the next calendar year 2022, a similar situation occurred, although on a smaller scale. In this case, the OMIP market of Spain and Portugal was the one with the highest increase, with 5.1% in both countries. The EEX market of Germany was in this case the one with the lowest variation with an increase of 1.7%.

The upward trend of the CO2 emission rights futures is one of the main factors behind the rise in prices of the electricity futures and the spot markets.

During the third week of April, the Brent oil futures prices for the month of June 2021 in the ICE market increased until reaching a settlement price of $66.94/bbl on Thursday, April 15. This price is 5.9% higher than that of the previous Thursday and the highest since mid‑March. On Friday there was a slight setback and the settlement price was $66.77/bbl.

Despite the continued concern about the recovery of the demand in those countries where the number of COVID‑19 infections continues to increase, the recent upward updates to the demand forecasts from the International Energy Agency and the OPEC favour the rise in Brent oil futures prices.

As for the TTF gas futures prices in the ICE market for the month of May 2021, the third week of April registered a generally upward trend. As a result, on Friday, April 16, a settlement price of €20.54/MWh was reached, 8.4% higher than that of the previous Friday and the highest in the last two years. The low temperatures favoured this price evolution. 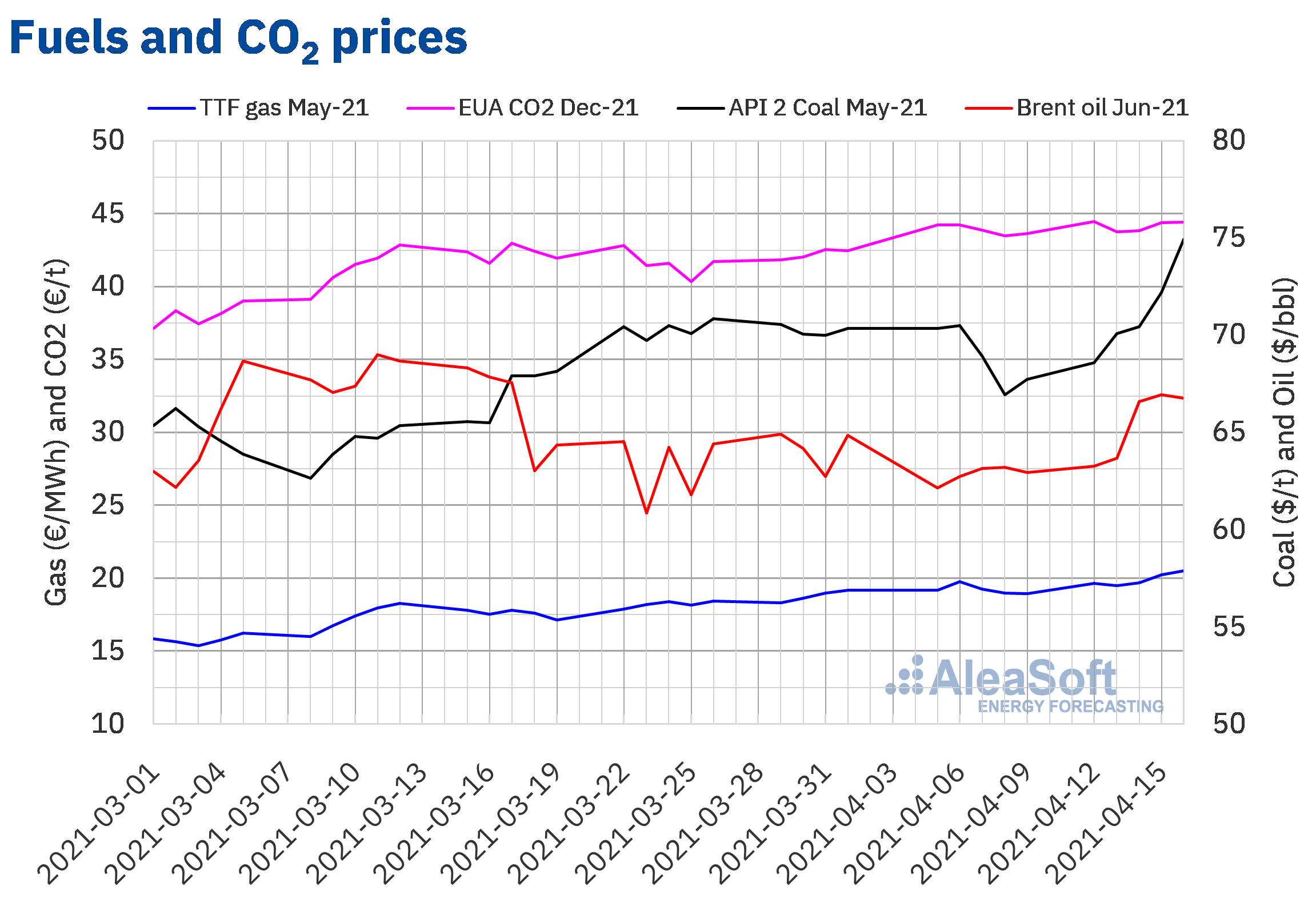 Monitoring of the escalation of the CO2 prices, of the spot and the futures prices

Last Thursday, April 15, the second and last part of the series of webinars “Prospects for the energy markets in Europe. Spring 2021” was held, organised by AleaSoft and with the participation of two speakers from Axpo. In the webinar and the subsequent analysis table, one of the topics that were most discussed was the escalation in the CO2 emission rights prices and the impact it is having on the prices of the spot and electricity futures markets.

During the webinar, the concern that this uncertainty is causing in the large consumers who must close coverage for the next year and see how the Cal22 prices continue to rise was commented. To manage the risk associated with this uncertainty, there are tools such as the mid‑term prices forecasts with stochasticity that AleaSoft showed in an online workshop, the recording of which can be requested here.

In addition to analysing the evolution of the prices, other topics were also discussed such as which the new players are and the role that they are playing in the financial markets to absorb the demand for financing given the expected avalanche of installed renewable energy capacity, the taking of positions regarding the climate change of the large stakeholders worldwide and the corporate PPA as solutions for the industry and for the renewable energies.

To estimate the impact of the fuels and CO2 prices on the spot markets, AleaSoft has short‑term prices forecasts. There is also an online data platform that allows all the data to be available and always up‑to‑date for monitoring and analysis, as shown in this online workshop. It is also possible to monitor some markets variables in the observatories available on the AleaSoft’s website.